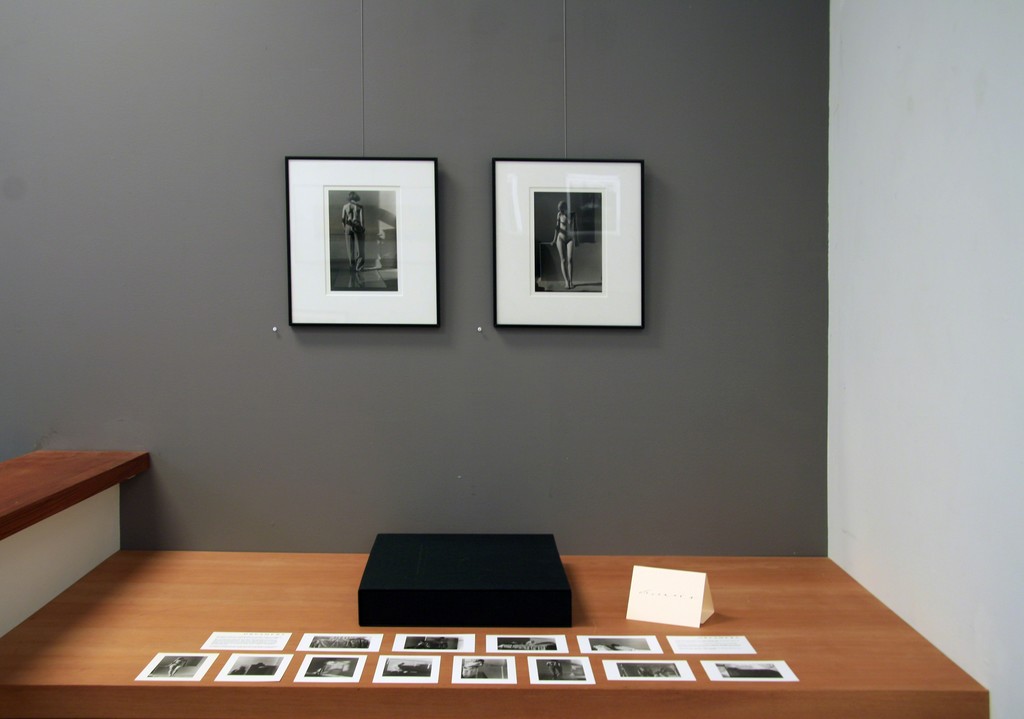 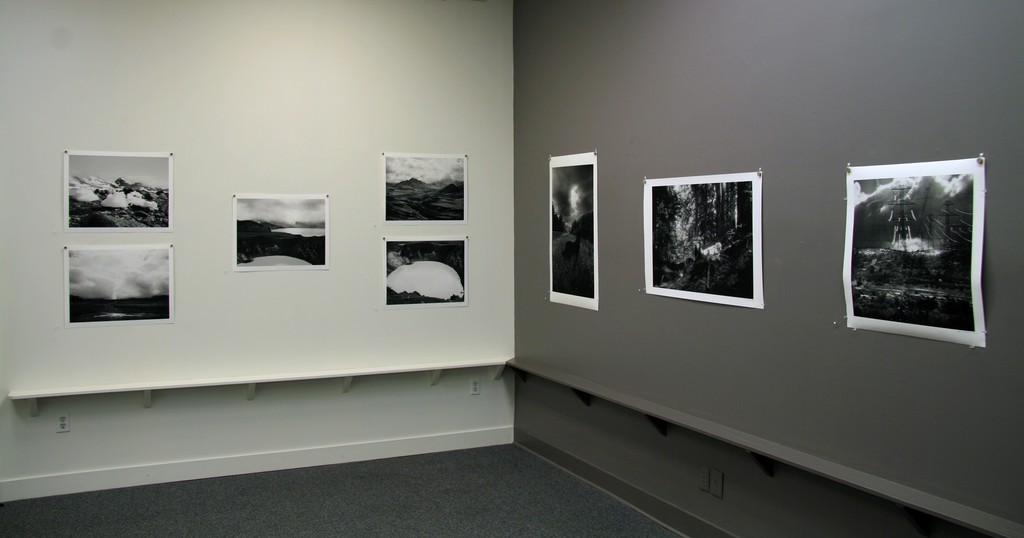 White wall: Work by Dianne Kornberg, "The landscapes were photographed on a geology trip to Greenland (“Kulusuk") and Iceland in 2002. I used a medium format film camera, and printed on Hahnemuhle rag paper."; Grey wall: Work by Glenn Rudoplh 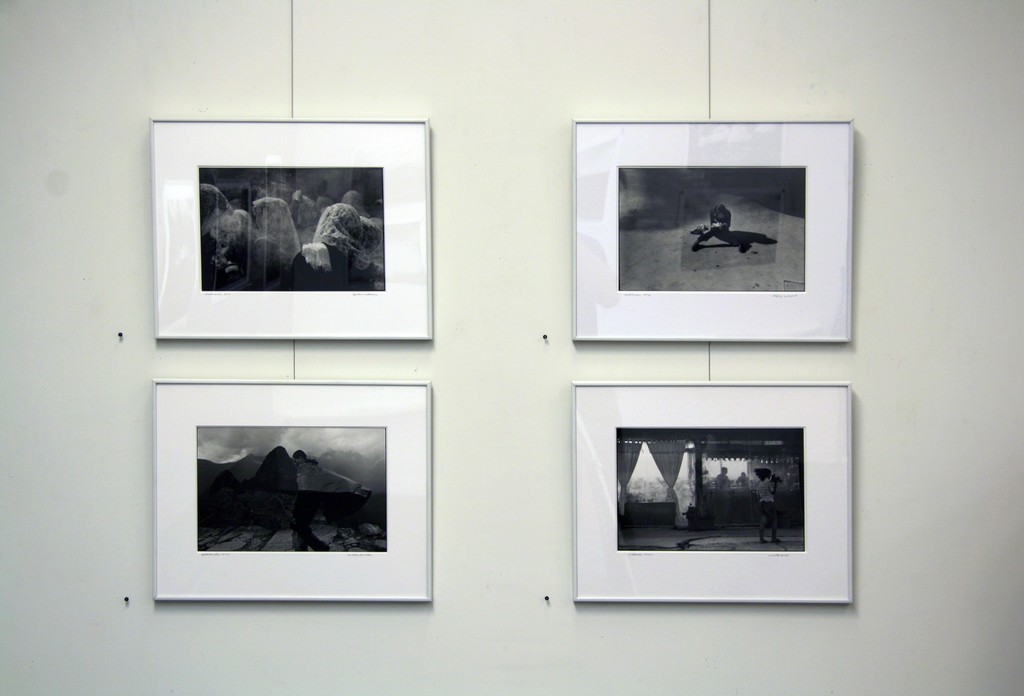 "My photographs are reflections of the world around me. The images are captured during walks in the streets of populated areas in Peru (particularly Arequipa, my home town) and other countries in Latin America and Europe where I set temporary residence for weeks at a time to familiarize myself with the culture and the geography. My work is not meant to be judgmental of the things I see. The photographs are like chronicles of whatever catches my eye during those walks." -Eduardo Calderón 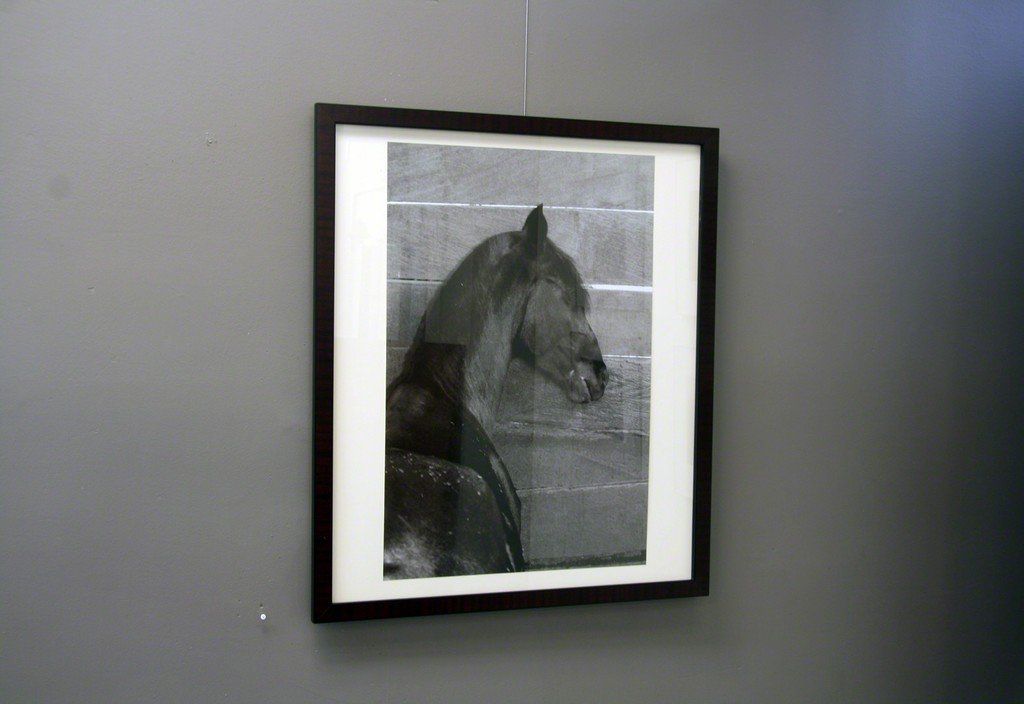 Carolyn Krieg,Image:"Stalled Mare", 2016, archival pigment print 1/5, 28 x 18.5”, 32x27.5" framed. In a recent interview the artist spoke about her process, "In one sense, that of observation, my process is the same. Out in the world I look with “new” eyes and “soft” eyes and the rest of my senses. This seeing directs my camera as I angle to capture whatever amazes me. In the studio I intuitively “emerge” the final pieces with drawing and painting techniques, still using “new” and “soft” eyes." 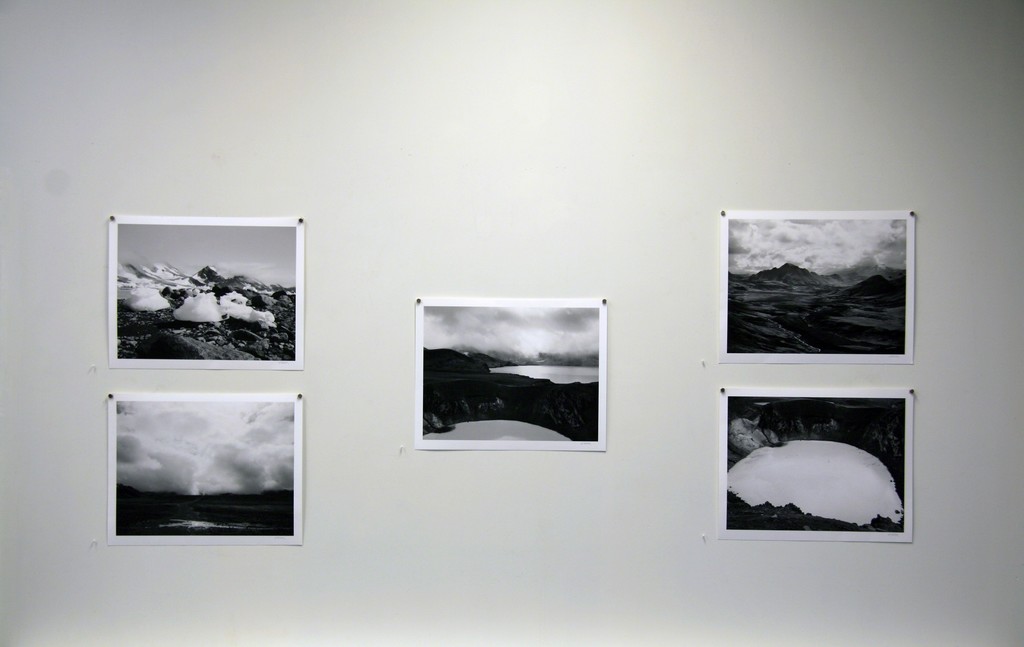 "I start with film and/or digital photographs that I combine and work on in Photoshop. My work is some kind of hybrid that combines my painting, drawing and photography backgrounds. I do extensive proofing before printing finished images—that I can make the print myself is an important part of my process." Dianne Kornberg, from a recent interview. 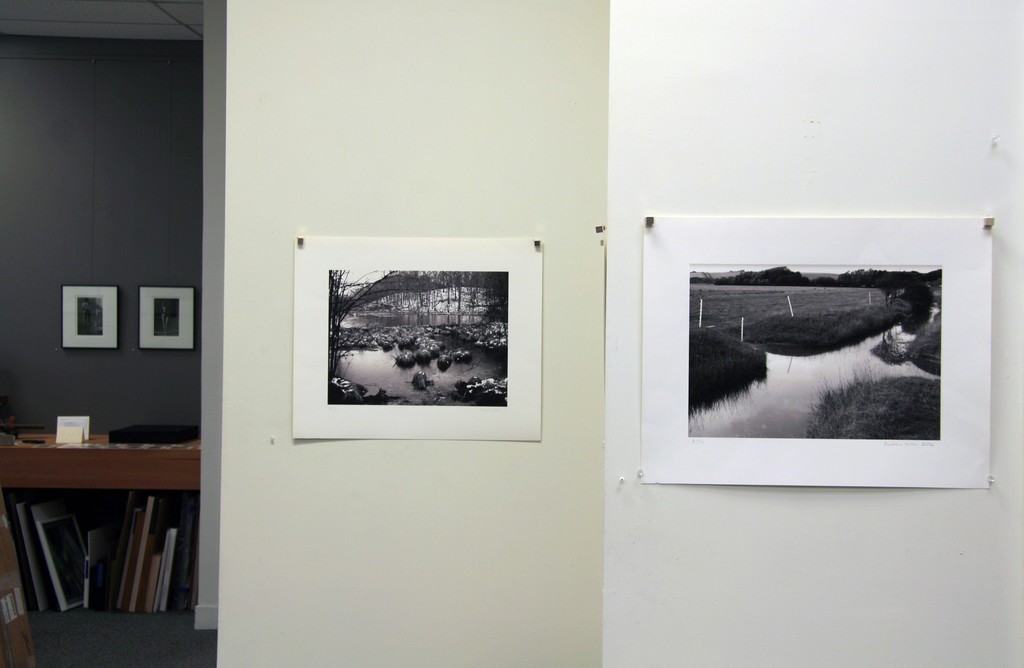 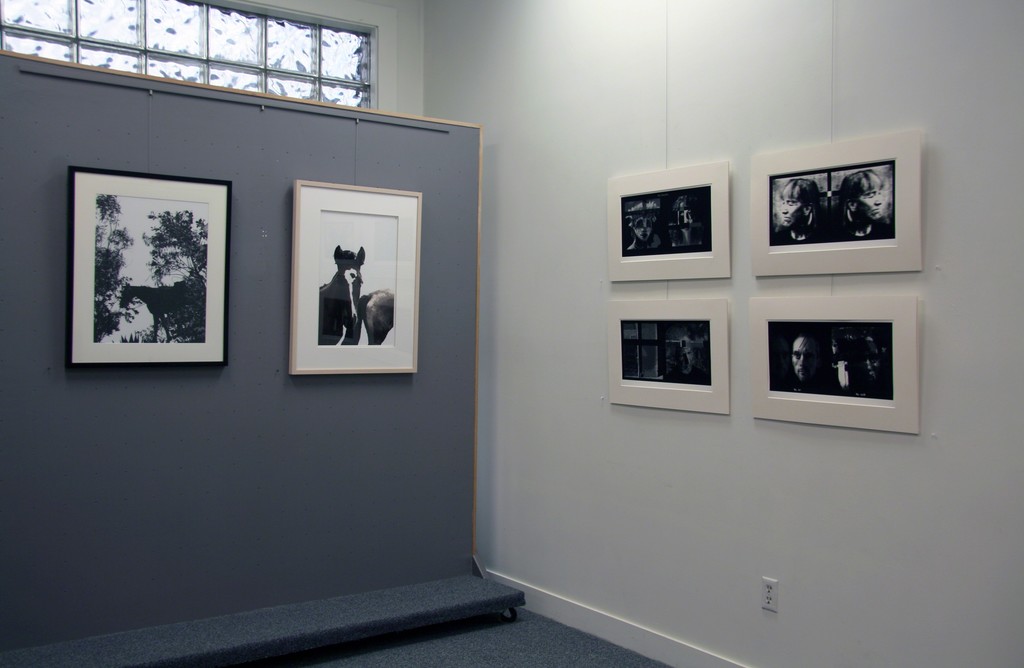 The Black and White Photo Show, curated by Norman Lundin features work by Marsha Burns, Eduardo Calderón, Dianne Kornberg, Carolyn Krieg, Glenn Rudolph, and Andrew Yates. This online exhibition is in conjunction with the exhibition on view through February 27, 2016 at Prographica Gallery in Seattle WA.

KDR is pleased to join its affiliate Prographica Gallery in the Madrona neighborhood in Seattle, WA, where Eleana Del Rio and Co-Director, Norman Lundin will curate exhibitions jointly as well as independently within its new establishment of Prographica/KDR.

In his curatorial statement Norman Lundn writes:
“This is a tonal show. We have selected work that is printed in black and white, but of greater importance is that it is tonal in concept. What this means is that the artist must start out thinking only in terms of tone (or value).

Eliminating color reduces the artist’s options; reduced options make those still available more important. Color, as used to define space, is gone; those nuances of gray tonalities must make spatial distinctions. Color, as a point of emphasis, is gone, so high/low contrast relationships must take its place.

Much of the ability to communicate the three dimensional world without color is possible because value (tone) actually plays the greater role in our perceptions. It is always a component of color but color is not a component of value. Because of this greater role, we are able to interpret tonal images as convincing impressions of the three-dimensional world. We are so accustomed to looking at images this way that we do not always consciously acknowledge that the visual information perceived is devoid of color.

Artists, working in black and white are aware of the above because when they look at subject matter that has color they are seeing it as a continuum of values. Incorporating that information into their art requires a particular kind of visual thinking. And, part of that thinking includes the intention that the viewer becomes aware of the nature of the artist’s black and white concept. As in all art, it is the end result rather than the means that matters most to the viewer. When all is done well, then even the most ordinary subject matter will communicate a powerful expressive presence. Such is the case with the work in this show.”

Marsha Burns’ photographs are widely shown and collected in the United States and Europe. Her work has appeared in Curator's Perspective: Magic Windows/Framing Place at the Whatcom Museum in Bellingham, Washington (2015); Out [o] Fashion Photography: Embracing Beauty at the Henry Art Gallery at the University of Washington in Seattle (2013); Flesh & Bone: Photography and the Body at the Portland Art Museum (2012-13); pARTners: Considerations Rather Than Constraints at the Kirkland Fine Arts Center, Kirkland, Washington (2005); Marsha Burns: Portrait of America at the Anderson Gallery, Virginia Commonwealth University, Richmond, Virginia (2003); and Marsha Burns: New Photographs at the

Charles Cowles Gallery, New York (2001). Prographica has included Burns’ work in The Landscape Evoked (2013), Body Language and The Space Between Things (both 2012), The Human Figure or Parts Thereof (2011) and Three Photographers (both 2011), and Preview of Things to Come (2010). Her photographs are in the collections of the Museum of Modern Art, the Metropolitan Museum of Art, the Seattle Art Museum, the Portland Art Museum, the Center for Creative Photography at the University of Arizona (Tucson), and the Stedelijk Museum (Amsterdam, the Netherlands) among others. Burns is a longtime Seattle resident.

Eduardo Calderón studied Anthropology at the University of Washington and received his BA in 1972. He lives and works in the Seattle area; however, he shoots much of his work while traveling in Latin America and Europe. Over the years Calderón’s work has been featured in solo shows at several Seattle galleries, most recently Francine Seders between 2007 and 2013. In 2013 his work appeared in a solo exhibition, 20 Portraits of NW Artists, at the Museum of Northwest Art in La Conner. It has also been included in numerous regional invitational exhibitions. Among them are two shows at the Seattle Art Museum—Seattle Collects in 2015 and a show of contemporary Peruvian art that accompanied Kingdoms of the Sun and the Moon, The Art of Peru in 2013/14. In the past ten years Calderón has received grants from 4Culture to photograph historic bridges in King County (2015) and to photograph and interview twenty visual artists working in King County (2010/11); the Port Gamble S’Klallam Tribe in Kingston, Washington, to photograph tribal elders (2011); and the National Endowment for the Arts to photograph and interview Mexican immigrants with artistic backgrounds in the Yakima Valley, Washington (2005). This is Calderón’s first show at Prographica.

Dianne Kornberg is a graduate of the University of Indiana (MFA in Painting) and the University of Washington (BFA in Painting); she is Professor Emerita at Pacific Northwest College of Art in Portland, Oregon. Recently Kornberg’s work was featured in several solo shows: Education of the Virgin at Bard College at Simon’s Rock in Great Barrington, Massachusetts, in 2015; Madonna Comix at Augen Gallery in Portland in 2015; Madonna Comix and Other Work with Poets at the Western Gallery at Western Washington University in Bellingham, Washington, in 2014; and Then and Now at Prographica also in 2014. Kornberg’s work was featured in a retrospective exhibition, Field Notes, at the Western Galleries at Western Washington University in 2008 and the Art Gym at Marylhurst University in Marylhurst, Oregon, in 2007. In 2014 her work was included in the group exhibition This Music Crept By Me upon the Waters at the Leslie Heller Workspace in New York. Her work has been collected by the International Center of Photography in New York, the Museum of Fine Arts in Houston, the Princeton University Art Museum, the Portland Art Museum, the Seattle Art Museum, and the Henry Art Gallery at the University of Washington. Dianne Kornberg currently lives and works in Washington State.

Carolyn Krieg’s work has been featured in shows at numerous regional museums and galleries. Recent exhibitions include Horses, a two-person show at Prographica (2015); I-5 Connects at Koplin Del Rio Gallery (2013); Artists from Prographica at the Bellevue College Gallery (2013); Continuing Cultural Legacy, Selections from the Safeco Collection at the Wright Exhibition Space in Seattle (2010), and The Art of

Discovery at the Bellevue Art Museum (2010). Her work has been included in several shows at Prographica including The Big Picture in 2013 and Landscape Part 1: Urban and Rural and Equine, Bovine, Canine, Feline in 2012. Many museums and corporations have collected Krieg’s work including the Biblioteque Nationale de France, Paris; the Museum of Arts and Culture, Spokane, Washington; the Holter Museum of Art, Helena, Montana; the Junior League of Seattle; the King County Public Art Program, Kent Regional Justice Center, Kent, Washington; Microsoft Corporation, Redmond, Washington; the Museum of Contemporary Photography, Chicago, Illinois; the Museum of Northwest Art, La Conner Washington; the Portland Art Museum’s Gilkey Print and Drawing Collection; and the Seattle Art Museum. Krieg has been a recipient of a PONCHO Excellence Award and a GAP grant from Artist Trust; she has had residencies at Cape Pine in Newfoundland and Vivenda Santa Iria in Penado, Portugal. Krieg lives and works in the Northwest.

Glenn Rudolph received his BFA from the University of Washington in 1968. Recently his work was featured in solo shows at the Season Gallery in Seattle (2013), the Pulliam Gallery in Portland (2008) and the James Harris Gallery in Seattle (2007, 2004) and included in such group exhibitions as Intimate Naked at Prole Drift Gallery in Seattle (2014); Equine, Bovine, Canine, Feline and Commentaries: Artists Respond to the Land at Prographica (both 2012), Reclaimed: Nature and Place Through Contemporary Eyes at the Seattle Art Museum (2011), Forest for the Trees at the Henry Art Gallery (2007), Boys and Flowers at Western Bridge in Seattle (2006), and WESTCOASTLAND: Recent Art from Baja to Vancouver (touring show, Seattle Art Museum; Museum of Contemporary Art in San Diego; Vancouver Art Gallery in British Columbia, Canada; and the Wattis Institute at the California College of the Arts in San Francisco, 2003-2004). Rudolph’s work is in the collections of the Museum of Modern Art, New York, NY; Amon Carter Museum, Fort Worth, TX; Seattle Art Museum; Portland Art Museum; City of Seattle; 4 Culture; Microsoft, Redmond, WA; State of Washington, Olympia, WA; Harry Ransom Center, University of Texas, Austin, TX; University of Virginia Art Museum, Charlottesville, VA; and Museum of Contemporary Photography, Chicago, IL.

Andrew Yates studied fine art at Hornsey College of Art in London, graduating in 1968. He continued to live in London for over three decades and taught at several prominent art colleges there. He gave up his full-time academic commitments in 2002 and moved home and studio to the East Sussex coast where he lived until his death in 2011. Yates’ work appeared in two exhibitions at Prographica—A Preview of Things to Come and Cross Section—in 2010 and 2011.

Prographica Gallery specializes in contemporary drawing, painting, and photography. The art ranges from straightforward traditional realism to abstraction. The artists featured include those in the early stages of their careers and others with substantial professional accomplishments. Prographica’s exhibition model is similar to that of a repertory theater wherein the work of gallery and invited artists is showcased in rotating thematic, solo, and two-person exhibitions.