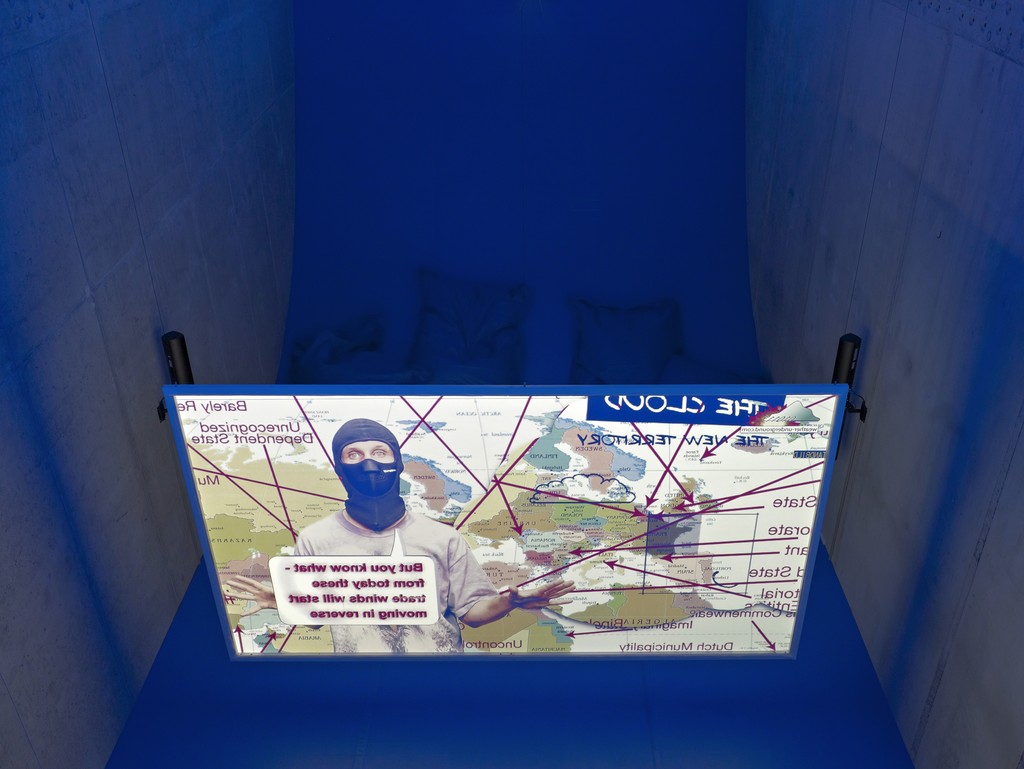 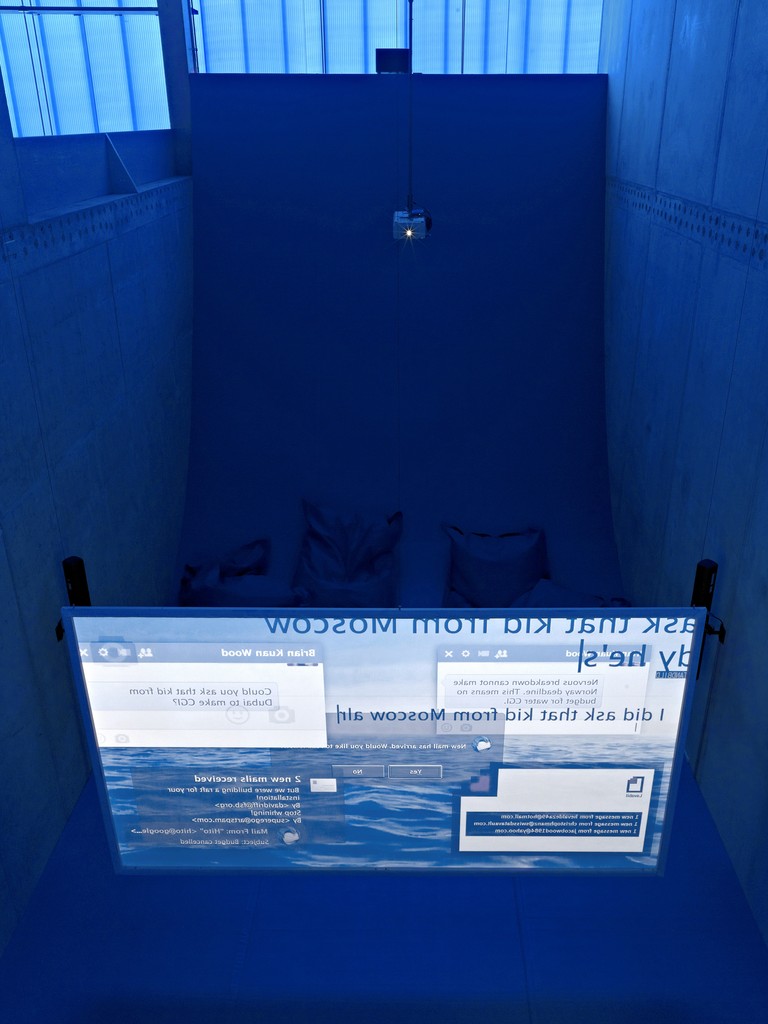 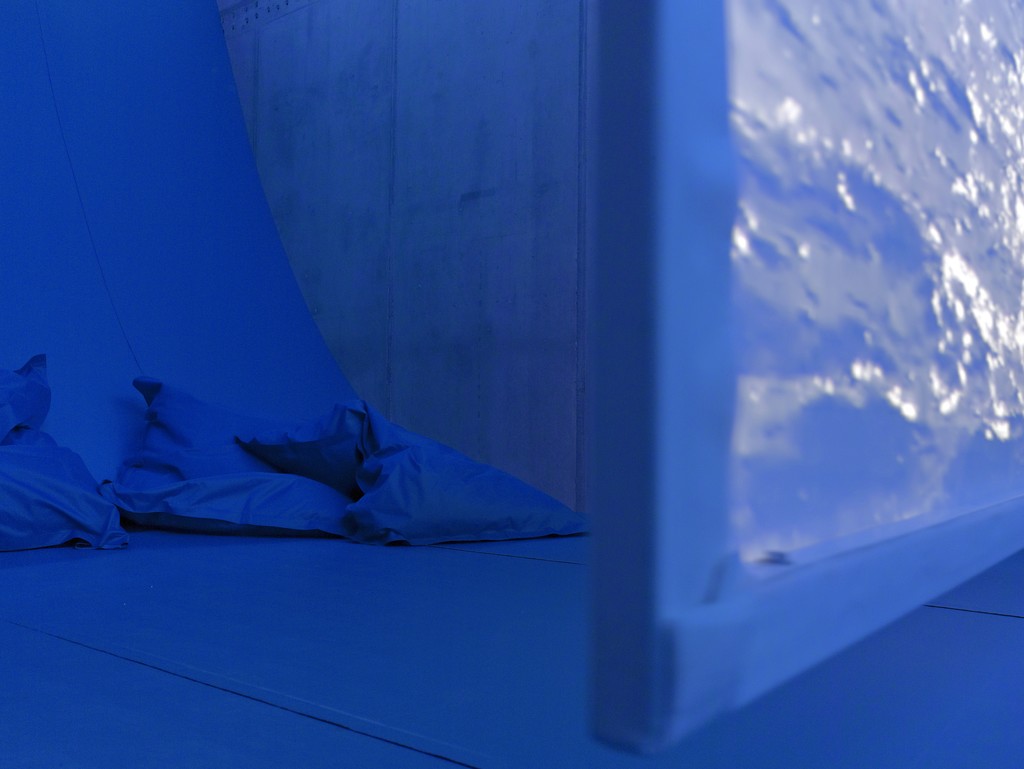 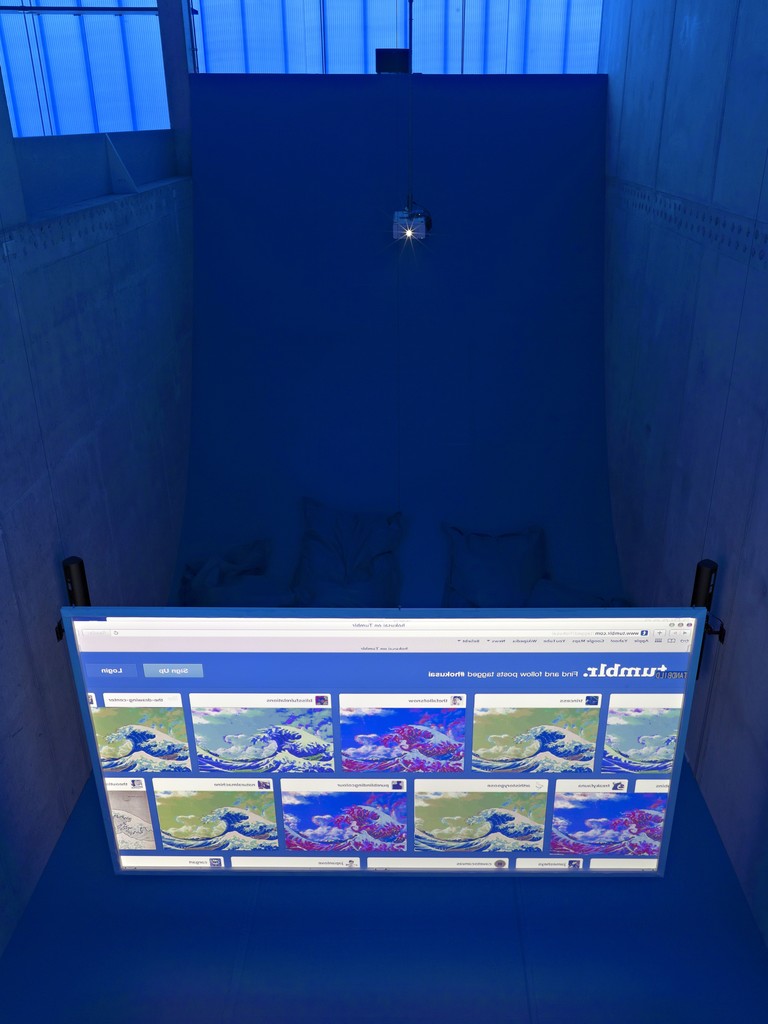 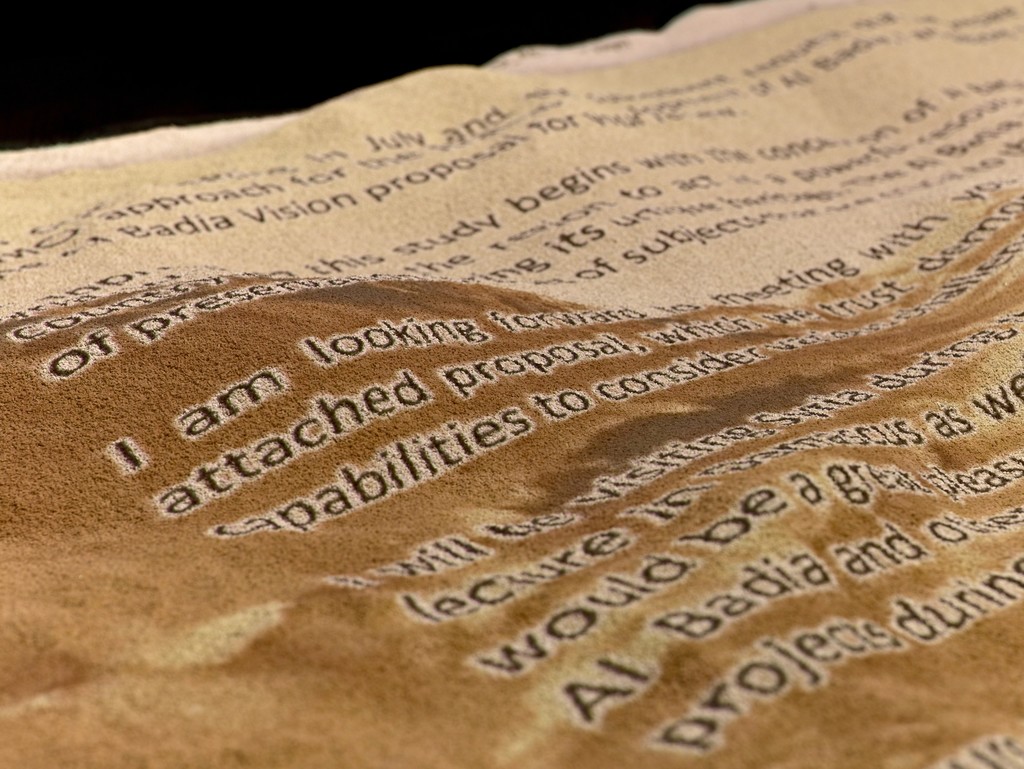 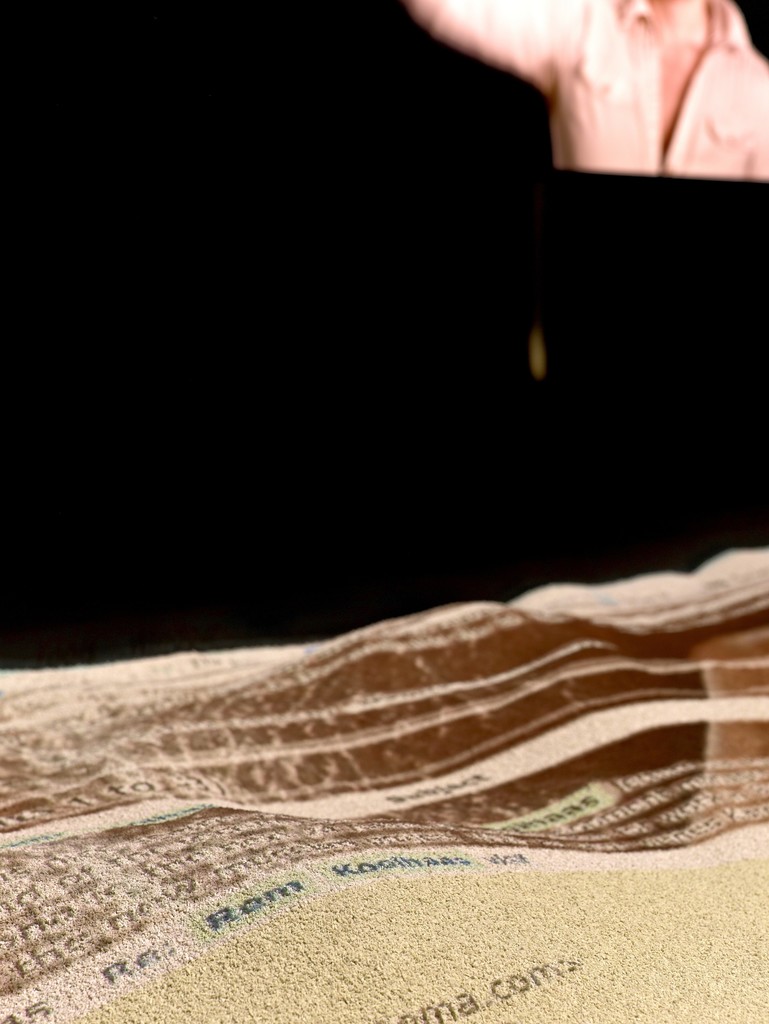 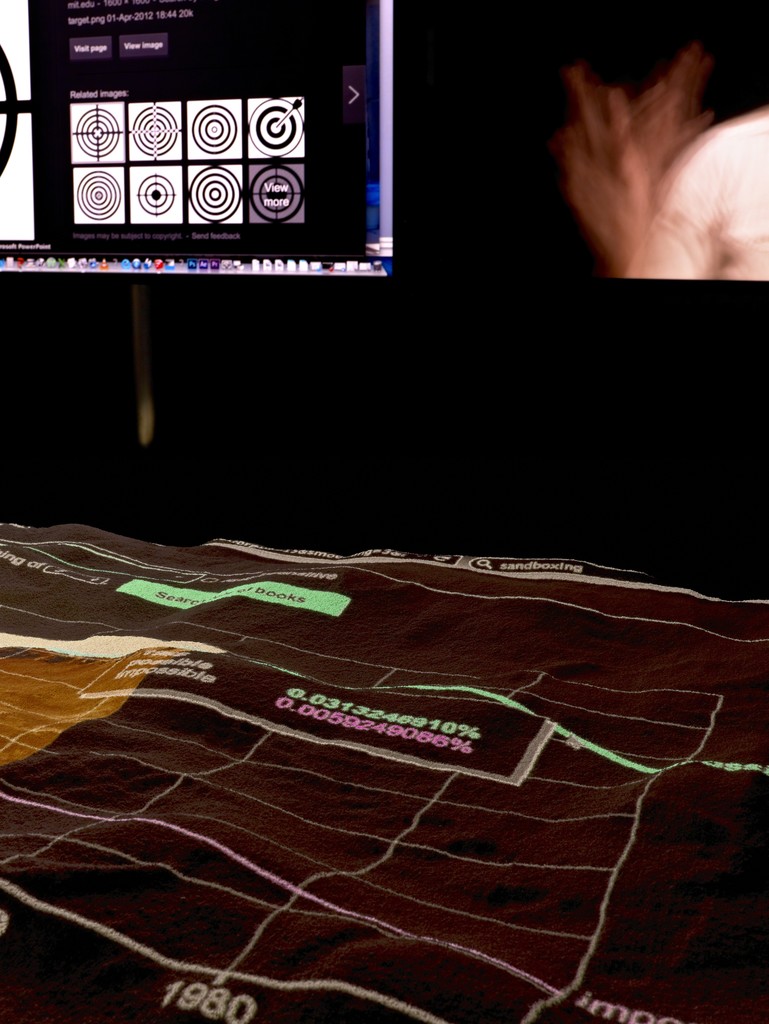 The seventh exhibition in KOW’s ONE YEAR OF FILMAKERS program is devoted to Hito Steyerl. Her first gallery show in Germany—on view are five video installations from 2012 to 2014—is infused with the Bruce Lee quotation “Be water, my friend!” In A WARRIOR’S JOURNEY the kung fu master advises a companion going to war to be as formless as water, which swiftly adapts to new situations and can take on any form. “Be formless, shapeless, like water!” It is a formula for survival in the face of a superior power. A solution that might appear in the handbook of a guerrilla, hacker, or activist movement—but also in those for wiretapping software, financial products, and hybrid warfare; wherever it is an advantage to quickly shift your position. Bruce Lee’s exhortation to melt down all vulnerable attributes finds its universal echo today in an era of liquidity.

In this context, Steyerl’s practice appears to be in sync with the times. In her work we seem to be able to discern the flowing agility of kung fu, a quality that enables social events to be taken up affirmatively, observed analytically, and countered critically. LIQUIDITY INC. (2014) is exemplary of the artist’s merging and dissolution of reality and speculation, theory and entertainment, social diagnostics and the dream factory. In the large-scale video installation on the gallery’s upper floor, “Be water!” becomes a metaphor for a material existence in the irrational alternation of economic tides, for an amorphous subjectivity swimming in the river of capital. Jacob Woods, a Vietnam-born Lehman Brothers analyst who turned to martial arts after the bank failure of 2008, is the protagonist of a story crisscrossed by economic weather forecasts and digital animations, about self-determination in the face of unpredictable financial forces that influence even Steyerl during the film’s production process.

In three video lectures, the theoretician and artist develops a language that recounts the interaction of power, money, authority, and art. Steyerl finds her voice among the conditions she speaks about, because these conditions are also her own. In IS THE MUSEUM A BATTLEFIELD (2013), she shows that the museum has long been one of the social settings in which the struggles for political and economic dominance are played out. But she also recognizes herself amidst these struggles, understanding her own close relationship to the military-cultural complex. When she investigates the origin of a machine-gun bullet that killed her friend Andrea Wolf, a PKK (Kurdish Workers’ Party) fighter, in 1998, she finds out that its producer, Lockheed Martin, is both a sponsor of the Istanbul Biennial, where she gives her lecture, and the patron of her exhibition at the Art Institute of Chicago, where her film on Wolf’s death is one of the works shown.

Truly occupying a problem allows credible action. And only by being a part of the world can art observe it and understand it. DUTY FREE ART (2014) strikes deep into art’s social function. Free-trade zones, where speculative art commodities are bought and sold invisibly and tax free, are, like civil wars, an important backbone of the international art business. Both facilitate the redistribution of public property into private hands, and are catalysts of global inequality. Furthermore, Steyerl uses WikiLeaks documents to show how the Louvre, British Museum, and star architect Rem Koolhaas served the Syrian Assad regime as museum planners and gentrifiers. She describes all of this as the top-down organized production and communication conditions of contemporary art hidden behind the art itself. Steyerl proposes a reversal of perspective to unveil one’s own reality bottom-up.

In her third video lecture, Steyerl also speaks about the social function of art and artistic role models in the present day: I DREAMED A DREAM: POLITICS IN THE AGE OF MASS ART PRODUCTION (2014). The technical simplification of firearms once democratized the power privilege of the ruling class. Today art has become a mass phenomenon; its elitism has ruptured. But what is being democratized here? Standing in line for humiliating talent shows? The futile hopes of a growing class of urban poor for a creative career? Steyerl takes Victor Hugo’s Les Misérables as the center of a story about rebellion and self-exploitation, the artistic mythos and the culture industry. In this narrative the guerrillero Comrade X and the talent-show legend Susan Boyle end up in the same boat as Steyerl and her listeners, dreaming the strange dream of the struggle for freedom in creative capitalism.

The final act of the exhibition takes place in the Art Institute of Chicago museum. The head of security, Martin Whitfield, and museum guard Ron Hicks explain for the camera how they protect valuable works of art—a “soft target” when one considers what could be attacked. For the duration of the 20-minute film GUARDS (2012), their experiences as armed police officers and their demonstration of a defense strategy in the white cube literally transform the prestigious institution into a battle zone, in which every inch of wall and every minute of contemplative silence come under the protection of the security apparatus—as does Steyerl herself, who we see in the closing credits sitting cheerfully on a bench as a representative viewer and an artist whose commissioned work of Institutional Critique will now be in the care of the Art Institute’s security team.

Perhaps it is the credibility of her position that makes Steyerl a reference point in contemporary art for many people. Her political position seems clear, but this clarity is only revealed and determined, and each time anew, in the confrontation with what an artistic practice—hers, Steyerl’s—finds, seeks, or imagines as social reality at any given moment. She crosses the bridge of her own subjectivity, her own intellectual and aesthetic productive reality, and on the path of speculative documentarism between the bridgeheads she discovers the forces that act upon her, us, and art, and spotlights them. Each of her works carries a surplus of optimism and hope; not accepting the given as given. Thus her oeuvre points to a possible resistance; one that is grounded in facts and yet thinks beyond them.