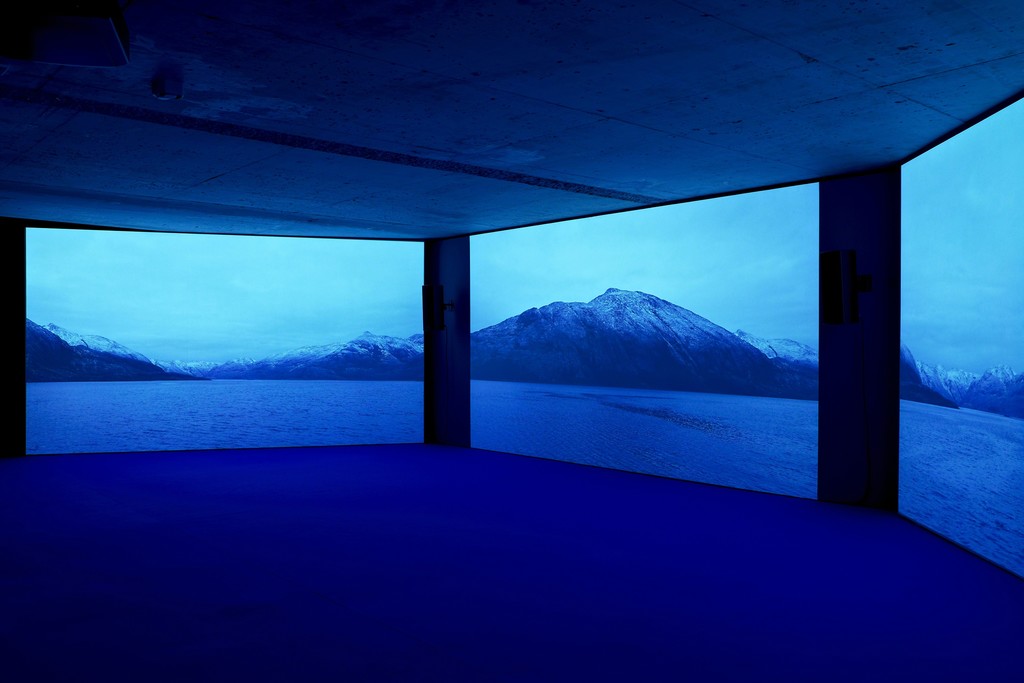 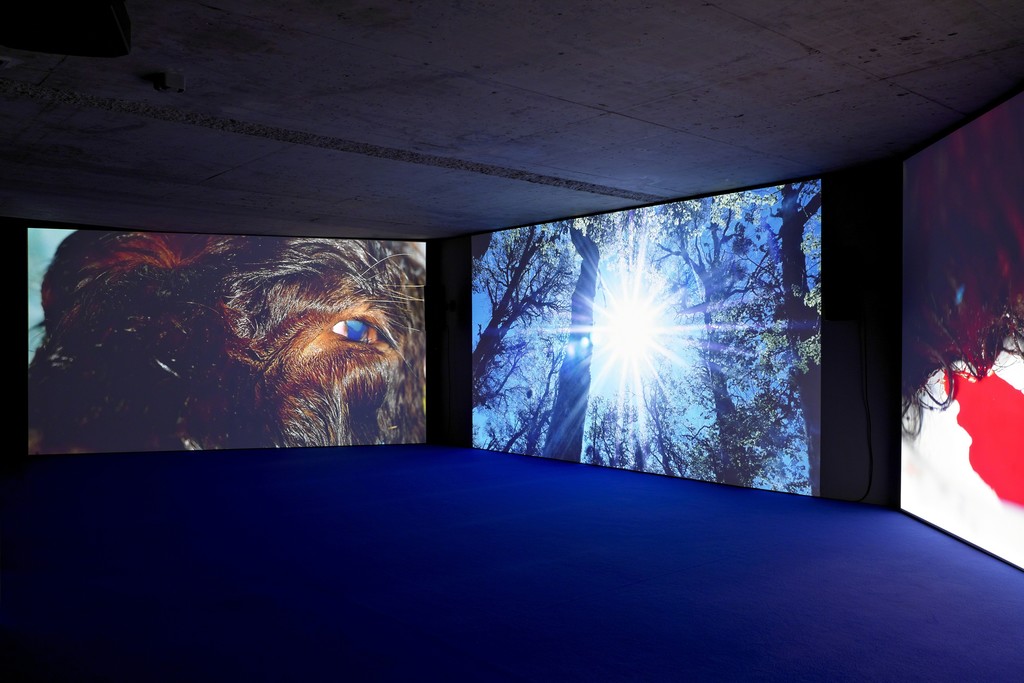 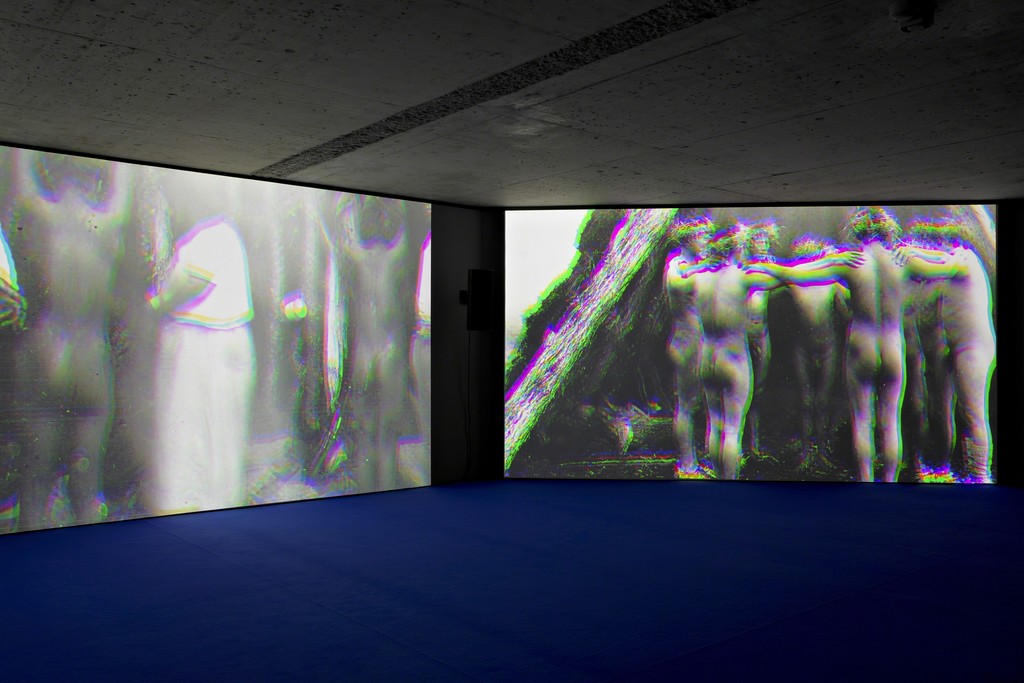 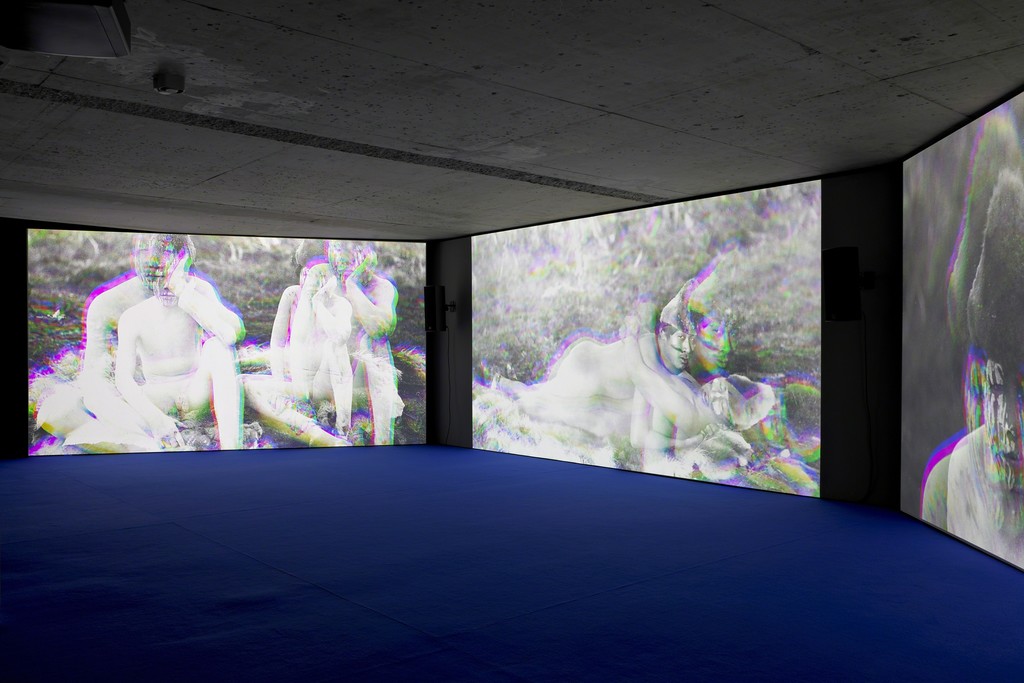 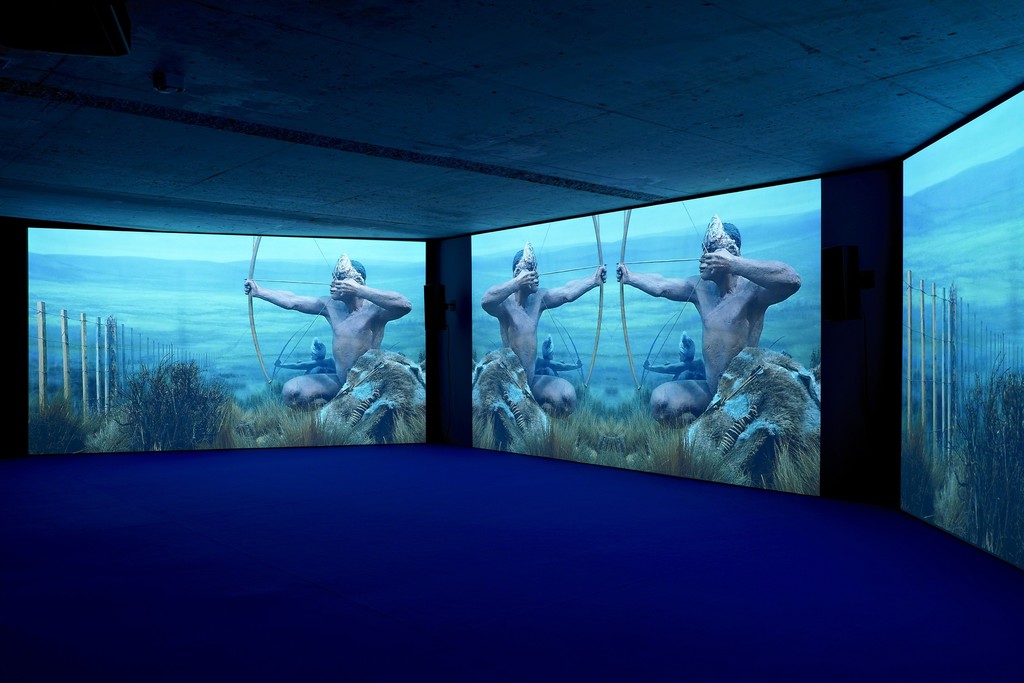 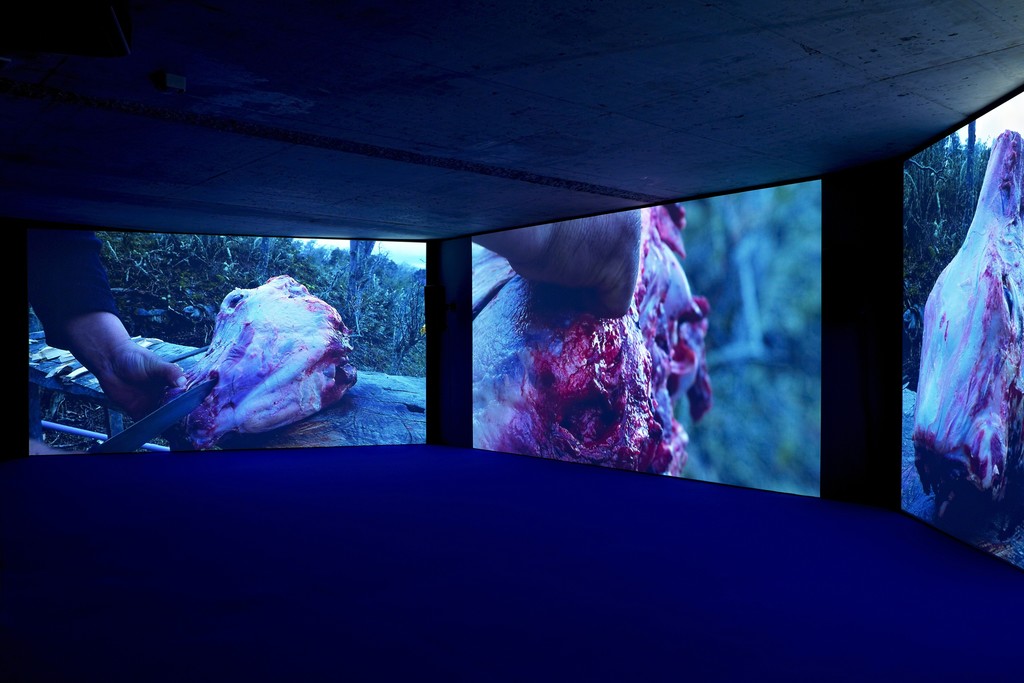 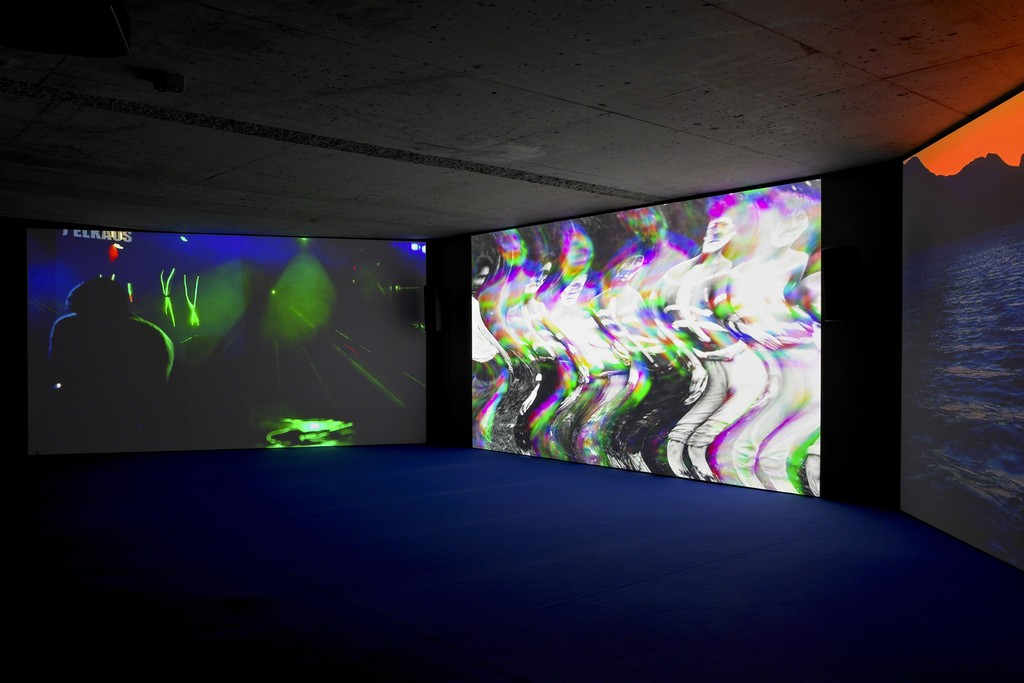 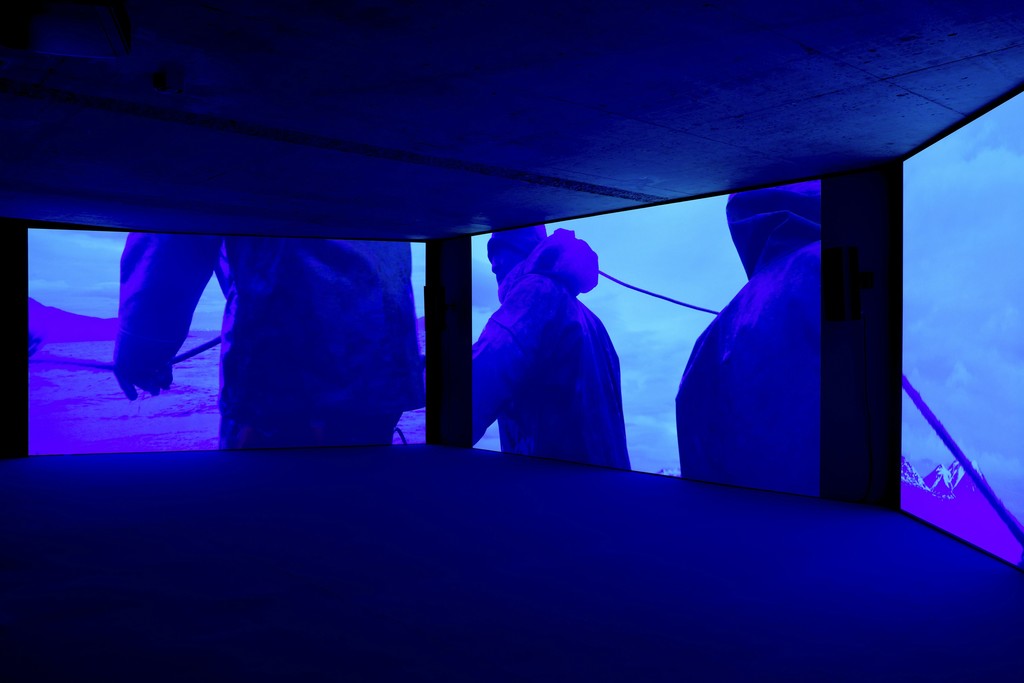 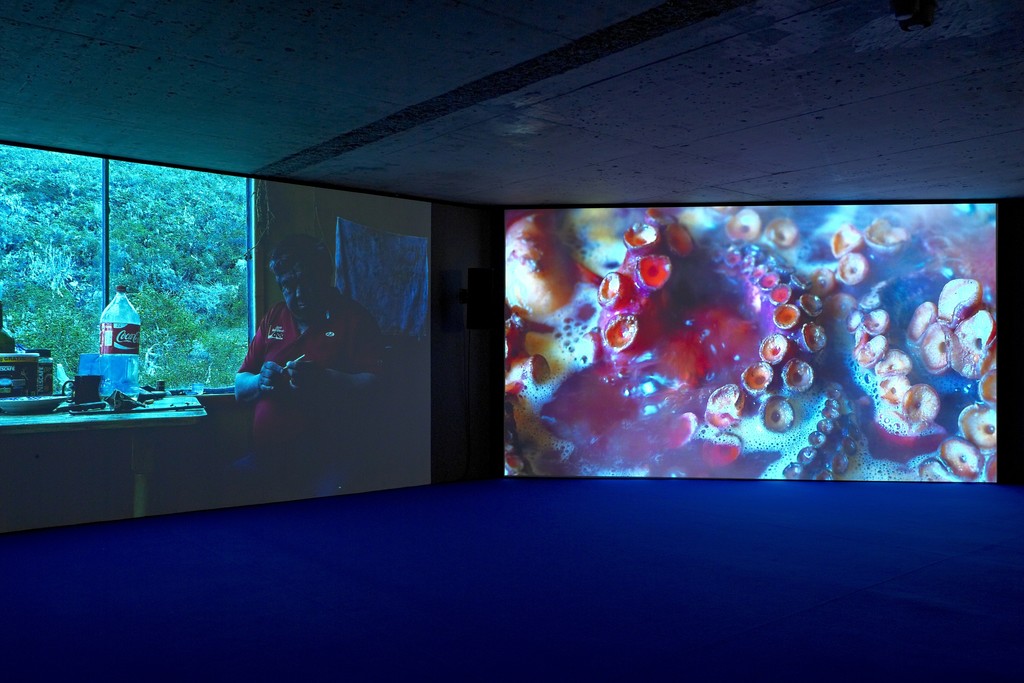 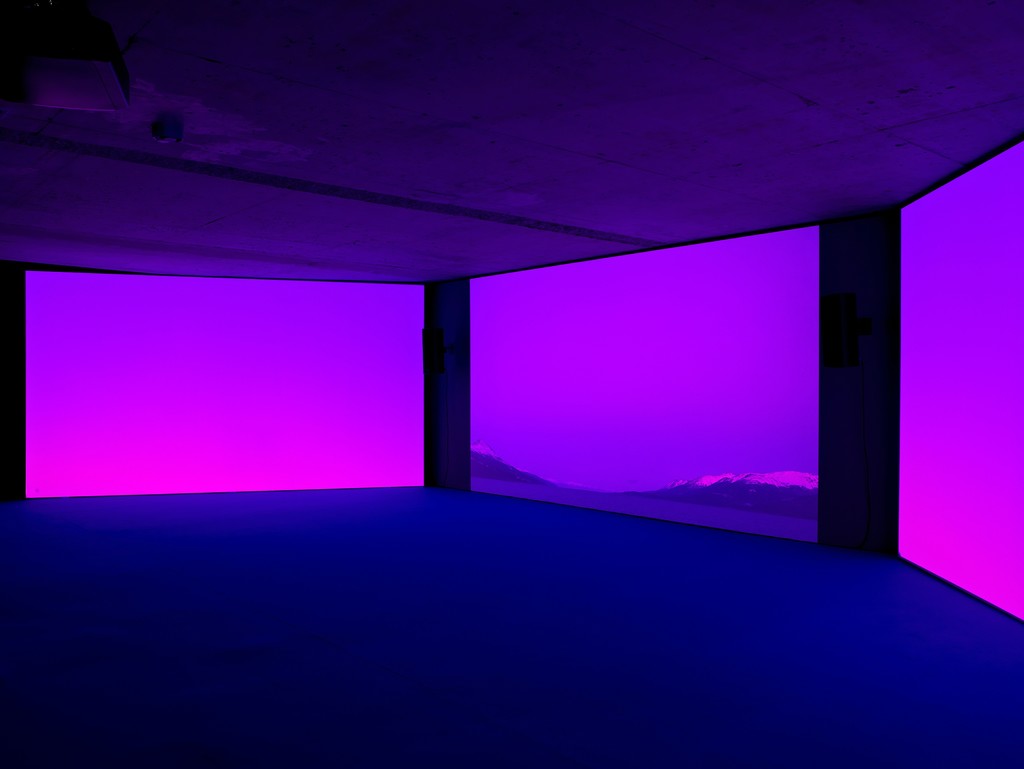 Techno music plays at the far end of the earth. Squid gyrate to a strobe light, the crab industry runs like clockwork, and real men earn their peers’ respect when their fish traps are full. The sunrise is as breathtaking in Patagonia as it is in the Panoramabar in Berlin’s Berghain nightclub. Using luscious colors, rousing rhythms, and meticulously paced cuts and transitions, Mario Pfeifer’s "Approximation", a three-channel video installation, caters to contemporary aesthetic preferences with brilliant images shot using high-resolution 4K technology. The footage was captured at the outer margin of the inhabited earth, a place where people sometimes fall over the edge and disappear. This time it is Tierra del Fuego’s natives who may or may not still exist. Pfeifer captured them on camera – or did he? What the three projections in KOW’s basement gallery show is not a documentary, but a way of seeing. The exhibition presents a new perspective on one of the planet’s most ancient and remote indigenous people: the Yaghan, who are in the process of dying out.

Formerly aquatic nomads, the Yaghan first settled the southernmost tip of South America thousands of years ago; most of them now live in Villa Ukika, a housing project set up by the military near Puerto Williams on the island of Shunuko in 1954. Not much is left of their culture. Decades ago, the Chilean government brought them churches, schools, wage labor, and an ethnological museum to make sure they understood how they would henceforth live their lives. Scores of international teams of anthropologists have been visiting to take final photographs of the remaining Yaghan, record their voices, and take DNA samples. They trace the image of a culture that has held still for the cameras as long it has been frozen in time. And the Yaghan play along. They make a livelihood of being holdovers from the past. The present? Development? No, nothing. Defying this rearview-mirror mentality in Cape Horn’s backyard, Mario Pfeifer has painted the portrait of an indigenous community in the here and now: it is disappearing not on the periphery but in the very center of the world, where global colonialism and capitalism swallow it up.

Pfeifer worked on site for four months, adopting a participant observer’s perspective to film the indigenous people as they live today. In stupendous and sometimes hypnotizing images, he has created an aesthetic model that runs counter to the conventional templates of anthropological and documentary representation. Pfeifer’s exploration – in the language of mathematics, to “approximate” is to forego exact solutions in favor of useful results – is an anti-representational project that blows ancient dust off the Yaghan’s shoulders. "Approximation" yields episodic cross-sections of their living conditions today, accompanied by a techno soundtrack that smooths their transition into audiovisual immateriality. The fish cannery and the nightclub, everyday life and nature: everything is uploaded into the global culture industry’s data streams, where it must seem as strange to international audiences as to the natives themselves. Pfeifer transposes local culture into a new register, releasing it from the antiquated hardened image of a community disfigured by its submission at the hands of modern civilization, and lending it a contemporary face.

Pfeifer showed the members of the world’s southernmost people digital copies of photographs of their forebears taken by the German missionary and anthropologist Martin Gusinde around 1920; pictures they had never seen on an electronic device before. The video shows them swiping and zooming through the images on an iPad, identifying relatives and reconstructing lineages that dissolve in the soundtrack’s rhythms. The New York-based musician Kamran Sadeghi also used the Yaghan’s elegiac dirges, which Gusinde recorded in 1923 for his digital compositions. Pfeifer’s "Approximation" is based on research and collaborations with various partners in Chile, Germany, and the United States. A book documenting the project will be published by Sternberg Press in 2015. An editioned album of Sadeghi’s music will be released during the exhibition's opening. Approximation will be presented concurrently in the German Competition section at the International Short Film Festival Oberhausen. Pfeifer was born in 1981 in Dresden, and lives and works in Berlin and New York.

The project was commissioned by the Museo sin Muros, Museo Nacional de Belles Artes, Santiago de Chile, where a first version was exhibited in late 2014. A bilingual publication designed by Markus Weisbeck and an LP with music by Kamran Sadeghi will be available through Sternberg Press in 2015. - See more at: http://www.kow-berlin.info/exhibitions/mario_pfeifer_1#sthash.hcaIINxf.dpuf