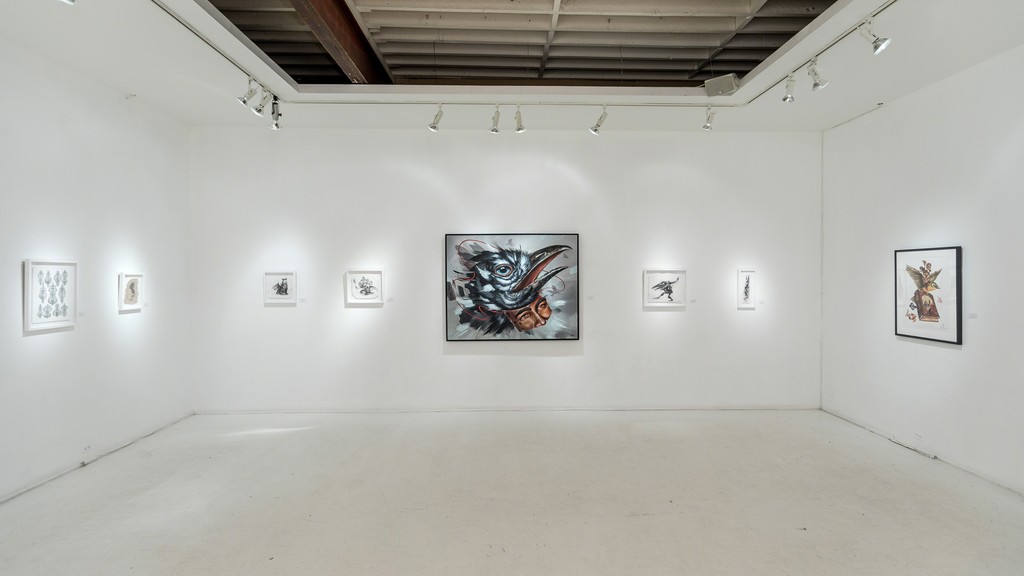 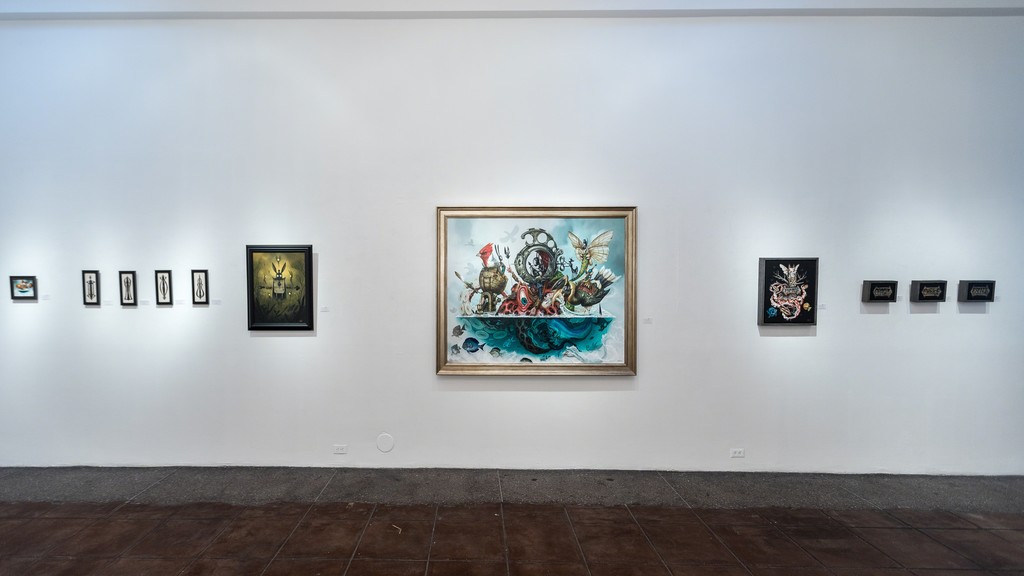 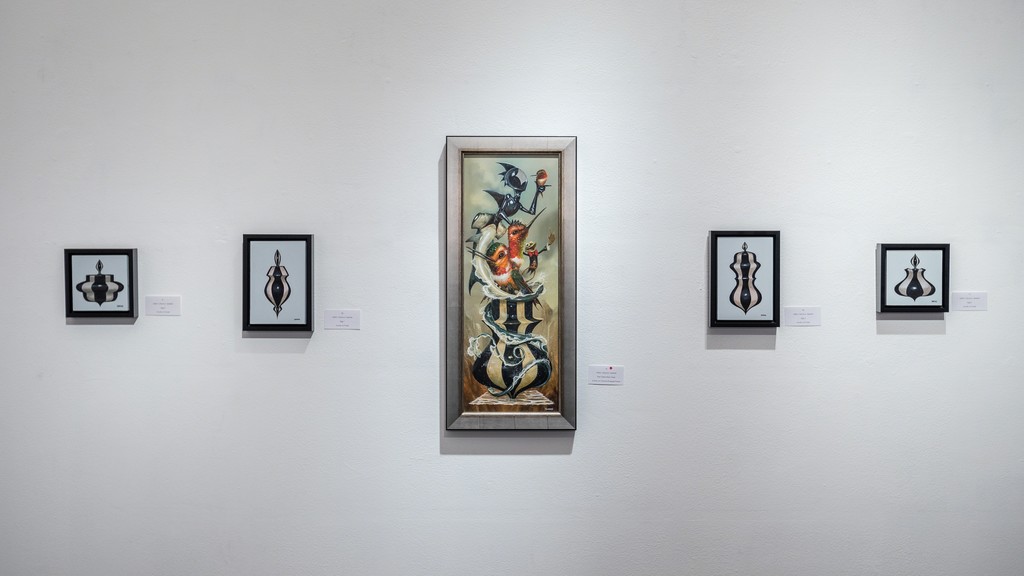 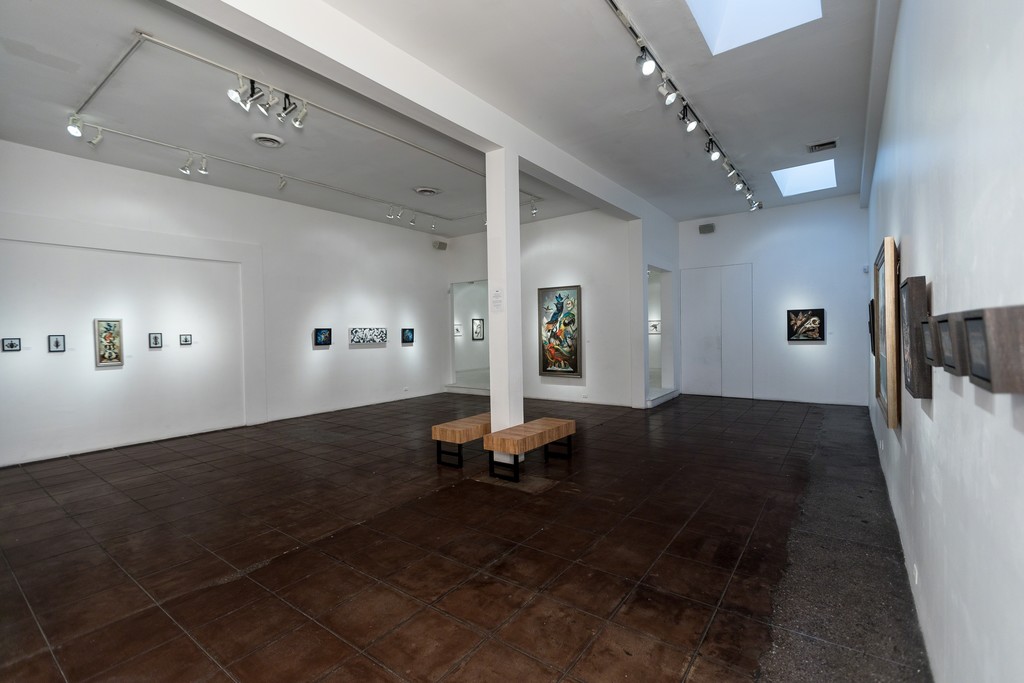 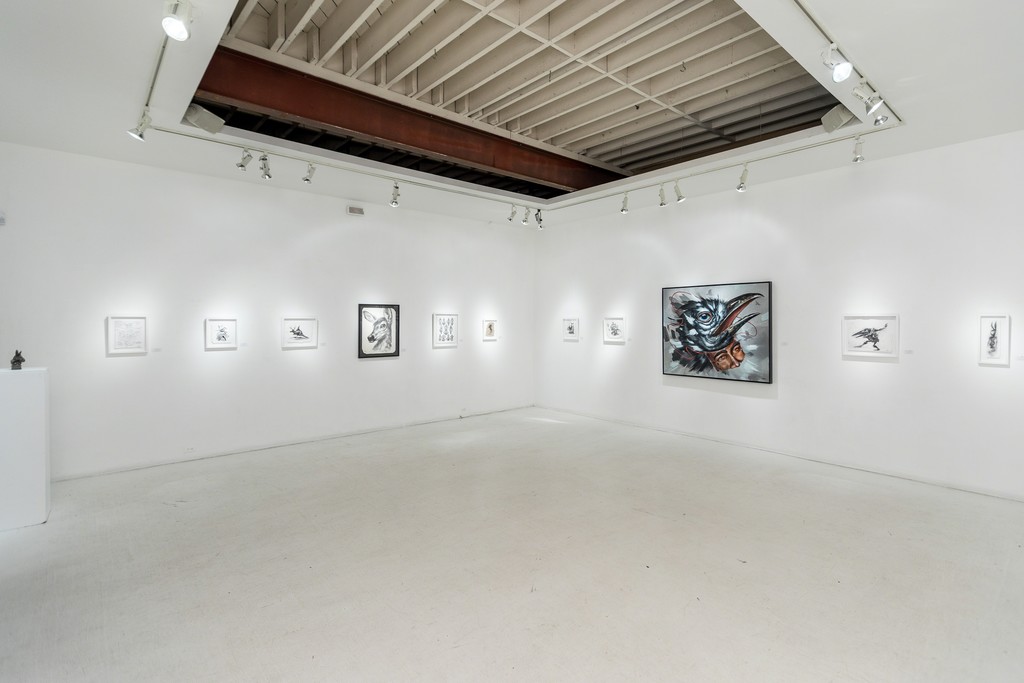 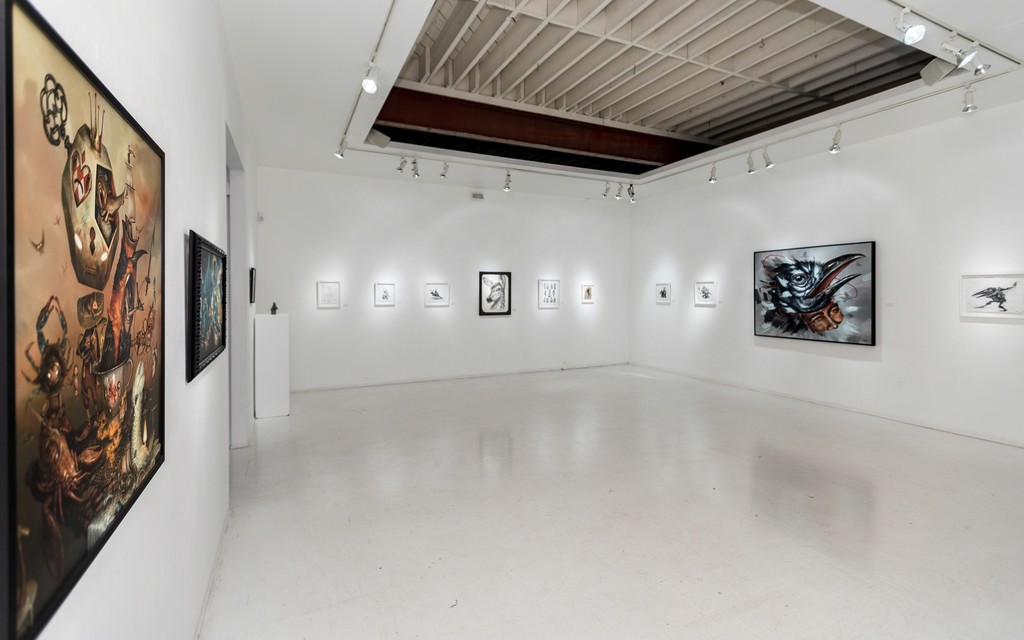 In the midst of modern society’s preoccupation with digital media, and the incessant effort to blur the distinction between fact and fiction through technological manipulation, Simkins revives the childhood curiosity of play and make believe. The Escape Artist recaptures nostalgic memories of new experiences, the feeling of youthful excitement, and the inventiveness of daydreams, a novelty that can get lost in today’s age of instantaneous documentation. Each painting frames an alternate universe, an escape from the ordinary world around us, through meticulously fine brush strokes, detail, and saturated blends of paint. As we peer into the ‘Outside’, a new world of imagination is unveiled.

Simkins’ land and sea animals in forward motion act as points of departure into a world worthy of Lewis Carroll, shaped by years of watching Saturday-morning cartoons and countless hours lost in story-books. His paintings feature birds, fish, mice, serpents and various animal /object hybrids that exude a sense of interconnectedness as they traverse mountainous landscapes and navigate through uncharted waters. Other works feature two-way signs bearing inscriptions that mischievously point the way to this secret world. Sailing aboard the Strawctopus vessel in the title piece “The Escape Artist”, the captain and fleet of travelers charter unknown territory within their own microcosmic ocean. With different entities melding into each other, Simkins creates whole kingdoms of unlikely compatriots on a quest into the unknown.

The Escape Artist challenges each of us to see the world with fresh eyes and renewed perspective.

“I have been taking refuge in my memories lately. Memories of the first time I saw a whale in the wild, seeing a meteor shower, and of all the daydreams that kept my wandering mind entertained as a child. Memories like these have become part of my subconscious and reinvigorate me each time I sit down to sketch out an idea for a painting. These memories are a lifeline inviting me to climb down a portal into another world, where I get to escape daily by just picking up a brush. I truly do experience this escape each time I paint. It has become a therapy that reminds me that imaginations are real, and sharing my creativity visually is a healthy way of expressing that gift. I feel the most comfortable when I get lost in a piece, always leaving room for spontaneous ideas to pop into place as the story unfolds. I am "The Escape Artist" in this instance, and my new collection of works take you on a journey through the rabbit holes I venture down as I draw and paint. What better escape could there be, than to hop on the back of a bird and fly off into other worlds?” - Greg CRAOLA Simkins

Greg Simkins was born in 1975 in Torrance, California. At age 3 his early attempts at drawing were inspired by various cartoons and later books such as Watership Down by Richard Adams, and The Chronicles of Narnia by C.S. Lewis. At the age of 18, Simkins started doing graffiti under the pseudonym “CRAOLA.” Graffiti became his impetus for painting and gave him the confidence to pursue large painterly works.

In 1999 Simkins received his Bachelor’s Degree in Studio Art from California State University of Long Beach, and in 2005, after some time working as an illustrator, Simkins pursued his desire to paint full time. He has since been featured in numerous group and sold out solo exhibitions. His art is featured in everything from clothing to video games and toys. His client/collaboration list includes, among others, Disney, Mattel, Juxtapoz, Logitech, Vans, Converse, Electronic Arts (EA), Pearl Jam, Foo Fighters, Linkin Park, Blink-182, Upper Playground, To Die For Clothing, and Dark Horse. Simkins’ artwork currently appears in galleries throughout the world.