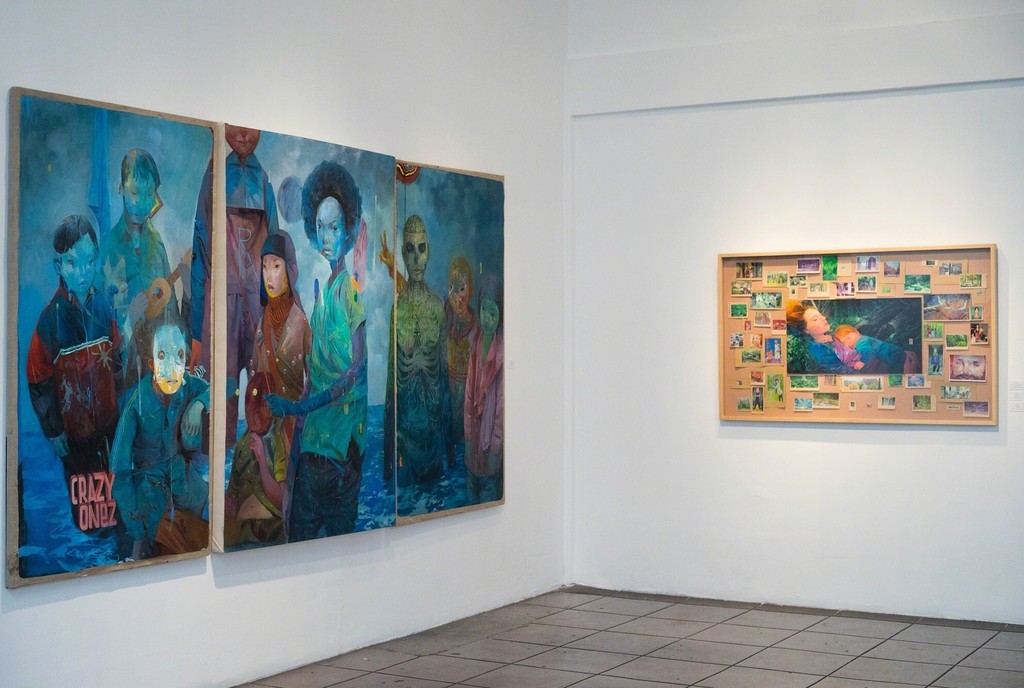 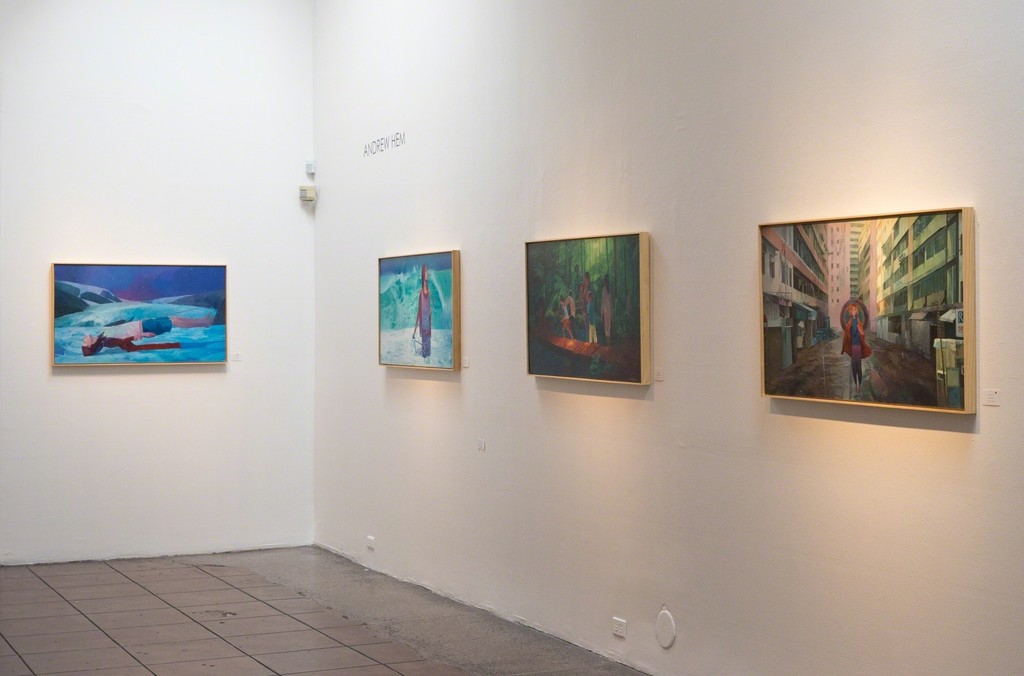 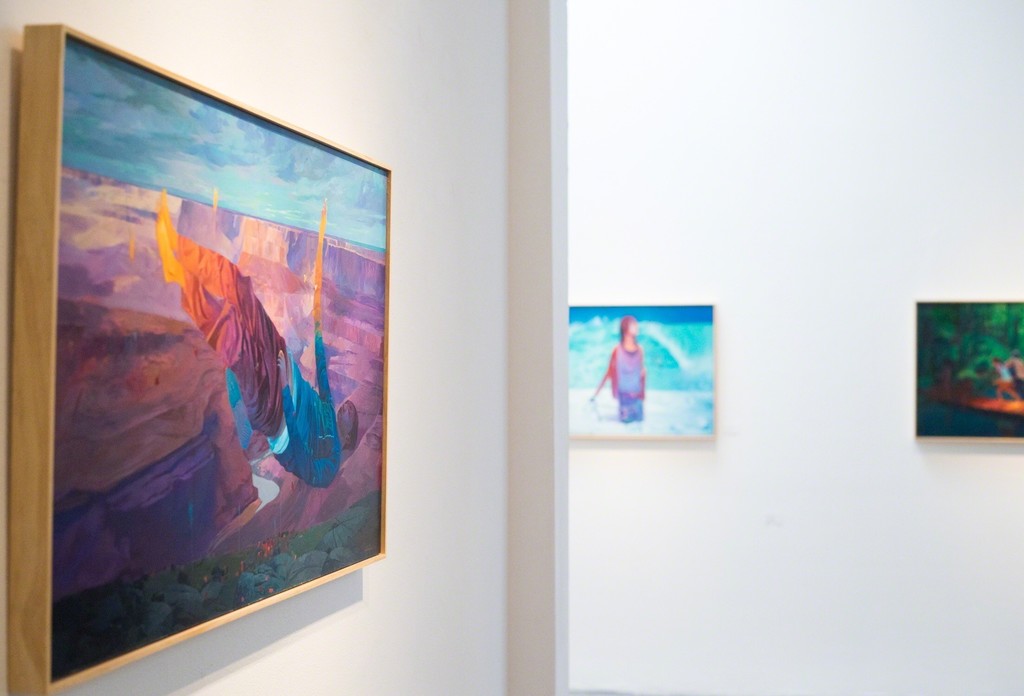 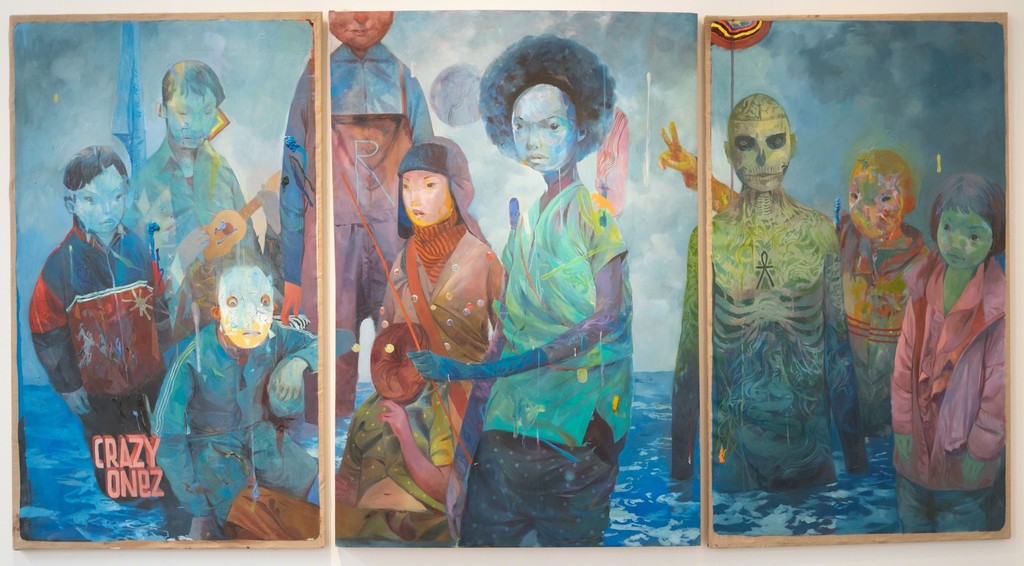 KP Projects//MKG is proud to present “Unknown Terrain” a new solo exhibition by Andrew Hem. Hem’s latest exhibition explores wonder, excitement and a sense of adventure as we traverse unfamiliar landscapes – both urban and natural – teetering on the edge of other-worldly.

Rendered in bold painterly graffiti inspired style and with an ever-fluctuating commitment to realism, Hem’s paintings resemble trance-gifted visions, resplendent in luminous, rich colors and a sense of comfortable solitude. Figures levitate on snow-capped mountains, stand stoically among roaring waves, or are engaged in gravity deifying feats in fall-kissed forests. In contrast to this natural scenery, other paintings feature wanderers amidst post-apocalyptic street scenes, marked by rust and the decay of man-made things. Despite the strangeness inherent in these ethereal scenes the figures within remain curiously at ease with their surroundings, as if possessing a firm sense of belonging.

As viewers we are interlopers on these moments of spiritual transcendence, yet each of Hem’s subjects reacts differently to our intrusion. Some welcome us with a smile, suffused in an aura of benevolence and comforting warmth; other spare no thought to the outside entangled in their mystical journeys, like heroes in some forgotten epic.

Hem’s latest series began in a personal mission to paint the Seven Wonders of the World by the time he was thirty: only three monuments off from his goal, his attempt fell short. Yet through his travels, Hem had come to revelation: “The average person goes to the Grand Canyon, takes a few selfies and then goes on their way - all within ten minutes or less. I started to notice this with every iconic monument...”

Resolved to find an alternative to this glib form of visitation, Hem took a different, more meditative approach. “Every place that I’ve visited, I spent a minimum of an hour documenting the environment by sketching or painting. It let me tune in, and feel like I was really one-on-one with nature.” Much like the wanderers in his paintings, Hem had learned how to immerse himself in a place, extending his awareness outward until he had achieved a measure of unity with his surroundings.

Through “Unknown Terrain” Hem shares this philosophy of more a mindful approach to existence and proves its worth with a bounty of wondrous visions.

Andrew Hem’s was born in transition, during his parent’s flight from Cambodia in the wake of the Khmer Rouge genocide. He received his B.F.A. in Illustration from the Art Center College of Art and Design in 2006 and has been featured in a variety of renowned publications including Beyond Illustration, Communication Arts, Society of Illustrators, Hi-Fructose, American Illustration, and Spectrum.