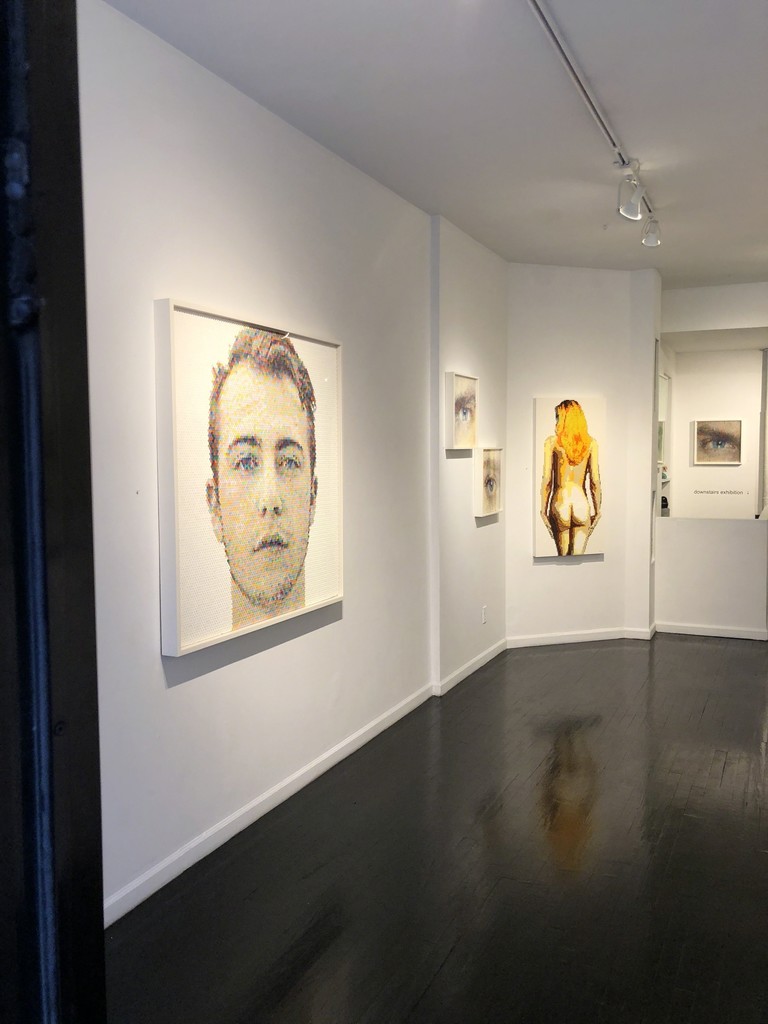 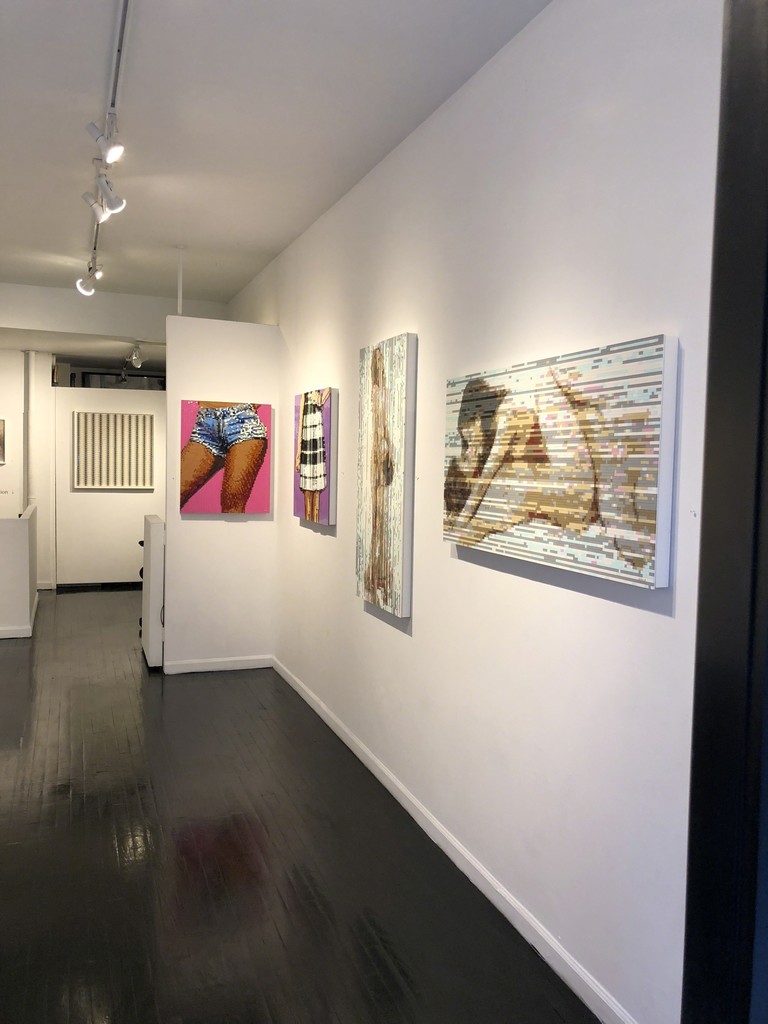 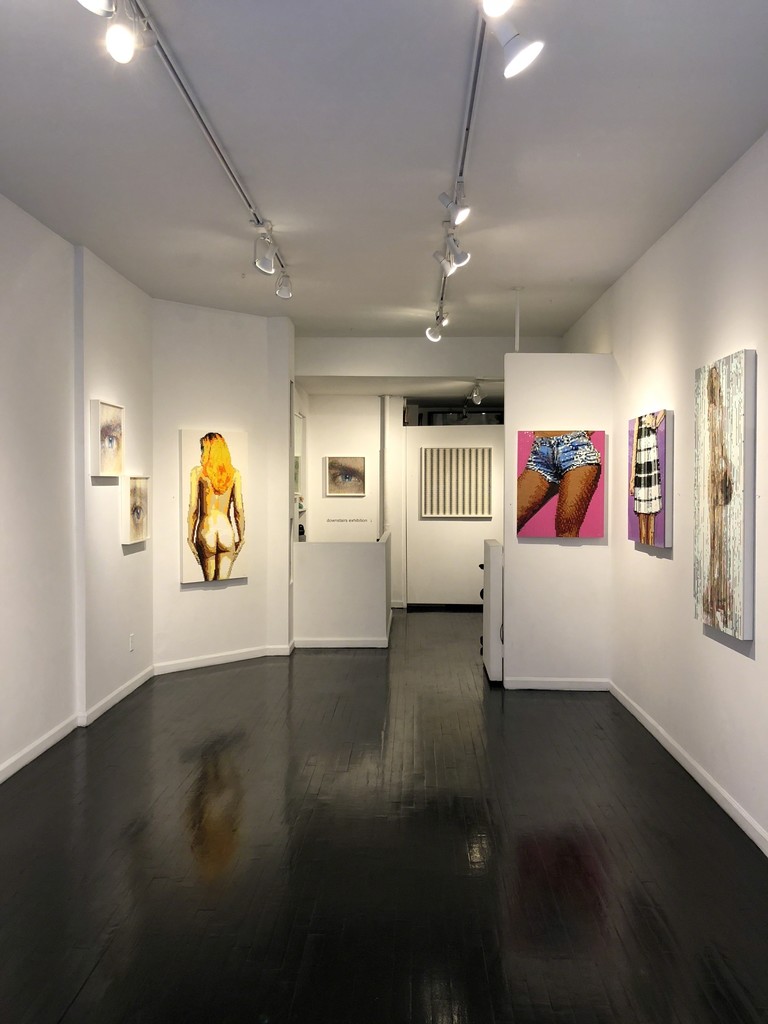 Reception: Saturday, June 16th, 6-8 pm – Krausegallery.com – [email protected]
Krause Gallery is thrilled to have renowned artists Andre Veloux and Peter Combe in their first solo shows at Krause Gallery NYC.
“Veloux/Combe”
Both their styles are similar in the use of pixels and concept but different in the use of materials, but there is no denying the perfected craft and talent they both posses.
Andre Veloux
Pop artist Andre Veloux's unique and captivating work is inspired by social change. His vibrant art combines two and three-dimensional elements that capture the imagination. Driven by social significance, much of his work is part of his multi-faceted gender equality project,
Building Blocks of Change. His Appearance works, depicting aspects of mostly women's styles of dress and appearance, they defend the right to present one's self freely. These works appeal to men and women equally, but often for different reasons. The thoughts and feelings that are raised by the works when they are seen or touched is undoubtedly revealing of the way modern women are treated for what they choose to wear.
His portrait works are striking, particularly those of female icons. Ranging from his own teenage daughter to Jane Fonda and Lady Gaga, the subjects are strong, self-motivated women. While some of these women have reached iconic status for their work and influence, all are agents of change in society. Alongside this are his composite portrait images, mixing up hair, eyes and eyebrows, lips and face shape into one image, which pass comment on the constant demands on women to continually rebuild and renew how they present themselves.
All of Veloux's works are made from Lego bricks. With a background in maths, computing and web design, Veloux decided to search for a medium that would best make use of his digital skills, and enable him to produce a physical, tactile artwork with a message. A native of Great Britain, he currently resides in Princeton, NJ with his wife and daughter.
Peter Combe
I am consumed by the subtle magic that occurs when playing with light, color and movement in my art making. Whether punched or shredded, I appropriate household paint swatches and make mostly 3 dimensional
artworks. These artworks transform and change subtly as the viewer shifts from his/her vantage point. There is a magic that occurs, a trick of the eye where color seems to occupy space - a void - at once ethereal, yet seen from another angle the whole appears as if a ghostly image, veiled in gossamer.
The artworks are many layered and full of experimentation, sometimes subtle and at other times less so. I enjoy the science of color, how the implementation of a single color, when applied to a small incremental tonal range, can transform a work either subtly or substantially.
Oftentimes I repeat an image, yet each permutation is unique. I will rework the image multiple times working through different color designations. Often this effect alters the subsequent works in subtle ways while in others the
change appears dramatic.
I draw from a full spectrum of 1,100 colors. I work tonally - each of the single color placements are based on tone rather than hue. This mode of placement achieves a Pissaro-esque pointillist finish. I will come back to the work and focus on achieving monochromatic elements - designating variations of a single hue to a desired area - not dissimilar to Andy Warhol's screen prints of celebrities - the way he designated nonrepresentational monochromatic areas of hue, and how they change form one variation of the same portrait to the next.
Another element to the work is the constant change and flux that is mostly produced by the viewers changing vantage points, an effect that is difficult to imagine whilst not being present before the work. These artworks do not photograph well. It is impossible to capture the kinetic element - an element whereby the viewer's motion or movement dictates the artworks transformative component.
A single light source projected at the color side of the discs produces a magical result especially when viewed directly before the work. It
is almost as if tiny LED lights shine between and bounce off the backsides (text side) of the paper discs. If lit by natural light, these artworks change throughout
the day. While working on these pieces, my favorite time of the day is the gloaming - it is at that time that the colors seem to come alive subtly yet rather dramatically at the same time - it becomes a still point for me as an artist.
It is these characteristics that propel me forward, to continue experimenting with the interplay of light, movement and color.
For further information, to preview the exhibition or to arrange an interview with the artist, please contact:
Benjamin Krause
212-777-7799 (gallery)
404-290-6329 (cell)
http://www.krausegallery.com
[email protected]
Photographs and hi-resolution images available on request. ##