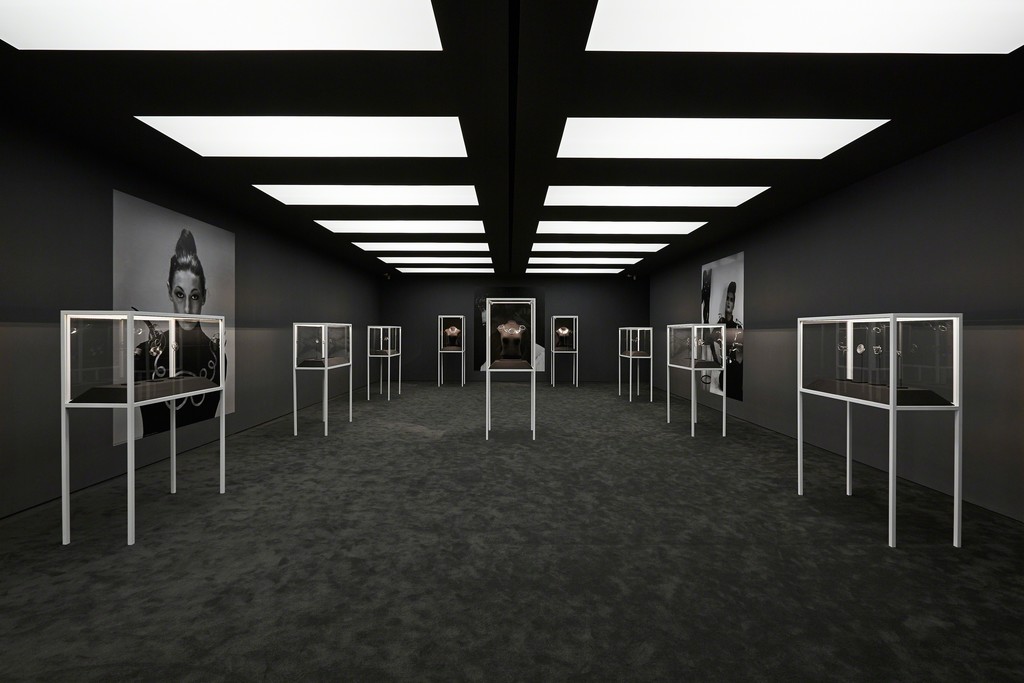 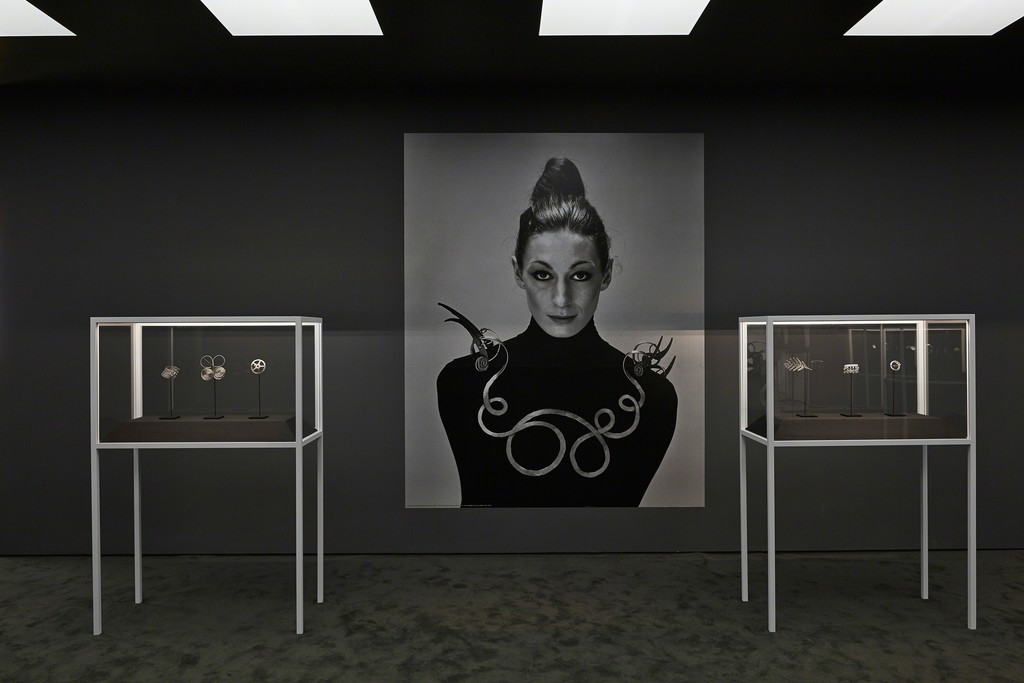 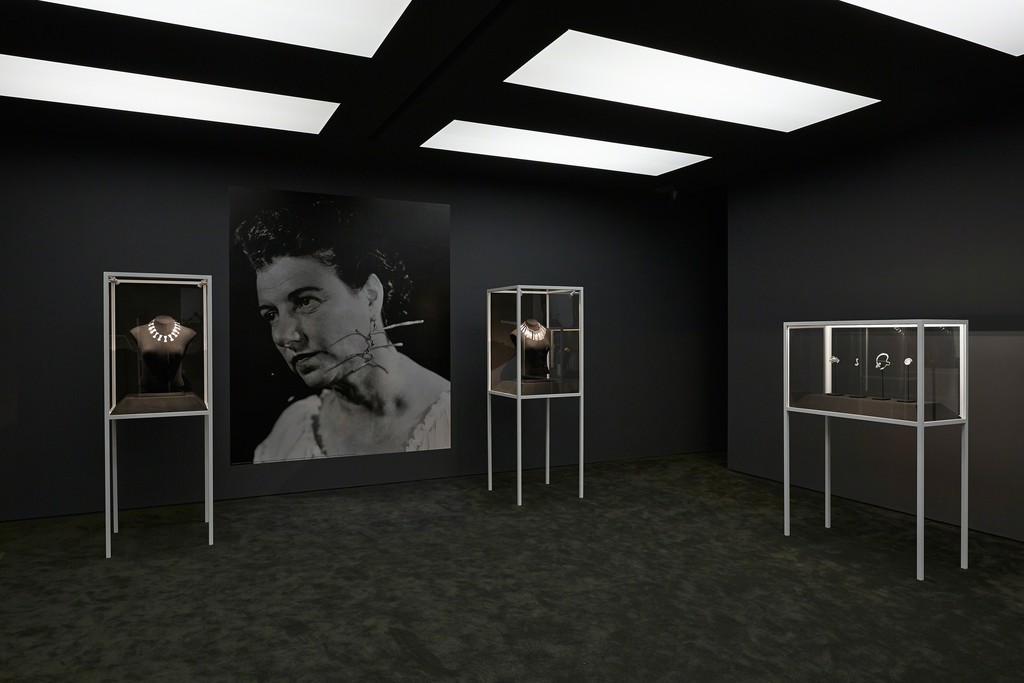 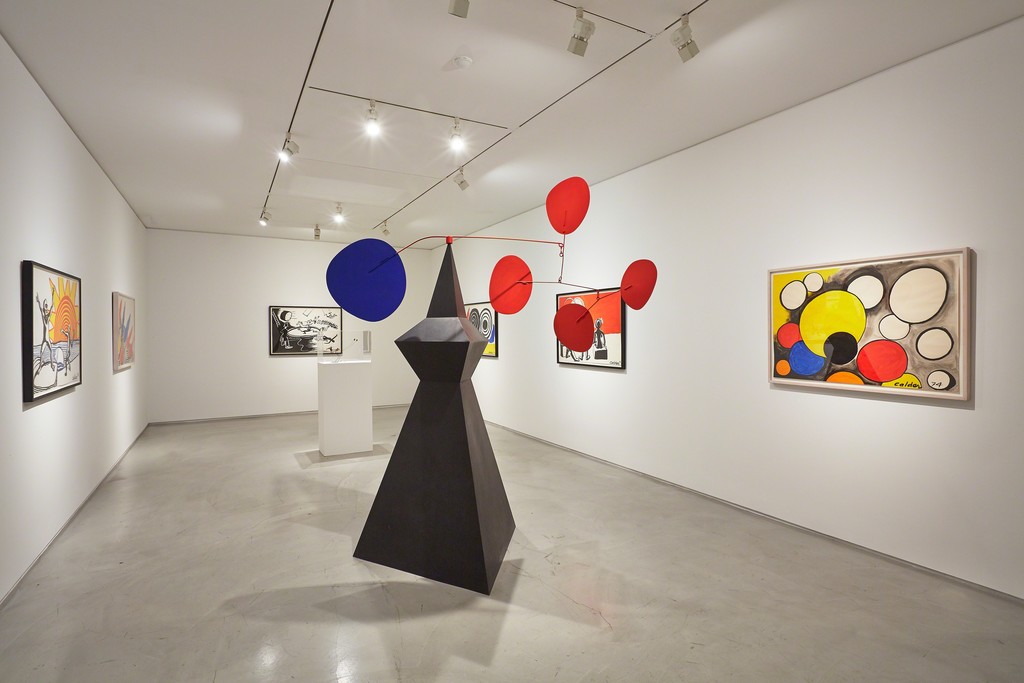 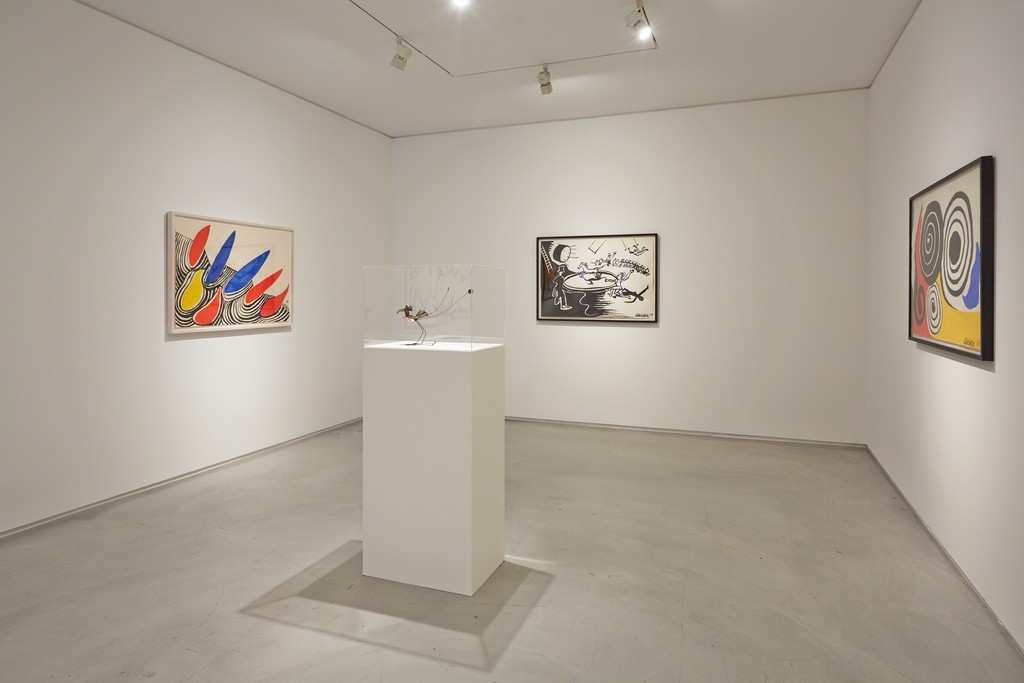 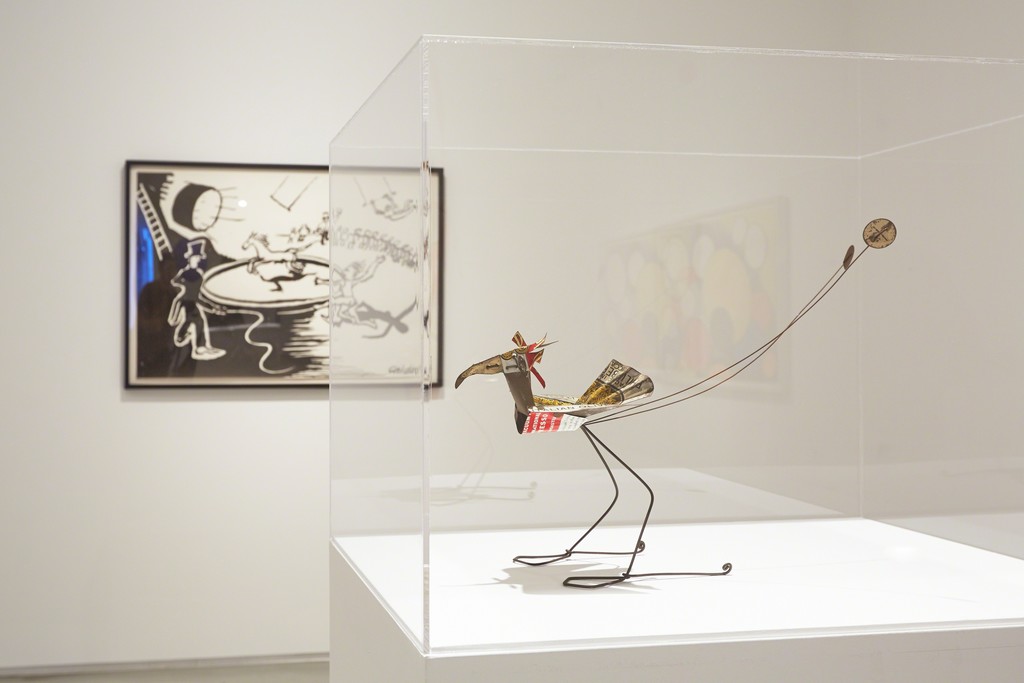 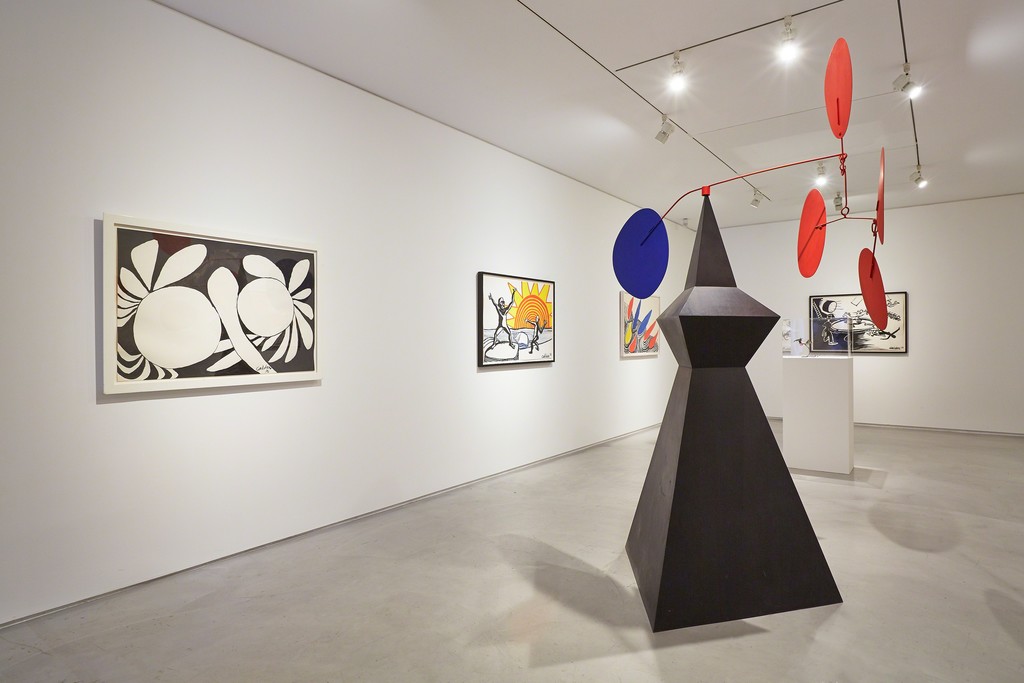 Kukje Gallery is very pleased to announce the opening of Alexander Calder Jewelry, a very special solo exhibition devoted to the exquisite artwork and singular vision of Alexander Calder. While best known as a sculptor of his signature mobiles and stabiles, Calder is equally renowned for his work as a painter and jeweler. Indeed, jewelry – more aptly termed “wearable art” – was a central element in Calder’s practice that he engaged throughout his life, having made more than 2,000 unique objects in his long and celebrated career.

The exhibit at Kukje, curated with the assistance of the Calder Foundation, centers around Calder’s jewelry, using it to frame the iconic themes of his art, and includes some of the most unique and accomplished examples of his wearable art. Made from materials as diverse as steel, silver and gold wire, and shards of glass, Calder’s jewelry not only exists as a singular testament to his creative genius, but also sheds light on and informs his work in sculpture and other media. Indeed, the artist exemplified throughout his life that there should be no hard and fast distinction between the fields of art and craft and that instead they should co-exist and stimulate the broader role of creativity in everyday life. In the case of Calder, this commitment to and engagement with the body and kinetic work clearly connects the jewelry with his larger sculptural works.

The material mastery that defines his mobiles and wire sculpture is at work in his huge repertoire of works on paper, toys, and bracelets, necklaces, brooches, and earrings. In this way, the exhibition at Kukje Gallery provides a very special and unique opportunity to appreciate the conceptual breadth and formal ingenuity of Alexander Calder.

A beloved master of modern art and one of the 20th century’s most visionary artists, Alexander Calder is well known for his innovative use of materials and abstract vocabulary. From his earliest days as a young man in Paris he utilized simple wire and string to fashion evocative jewelry as well as sculpture – often made as gifts for his many artist friends including Joan Miró, Marcel Duchamp, André Breton and others. Calder was celebrated for his generosity as well as the profound ease with which he could transform simple materials, and this popular idea of Calder is reflected in the care with which he hammered and wove metal wire into magical wearable art.

The success of his well-known Cirque Calder employed many of the same ingenious and deceptively simple techniques for shaping wire and other prosaic materials and can be seen as a kind of conceptual frame and emotional foundation for much of what defined his life’s work: themes of play, formal elegy, physical movement, and the magic of metamorphosis. This latter theme forms a palpable connection between Calder and the Surrealists, both of whom recognized the power and importance of framing the body in art.

It is in this context that Calder came of age during the 1920s in Paris, skillfully integrating the many experiments of avant-garde art such as tribalism, performance, and the resurgent interest in craft. These different but complementary vocabularies can be seen in many of Calder’s signature motifs such as the spiral and balanced forms, his celebration and framing of fragments and relics such as glass and broken pottery as well his uncanny ability to use the wearer’s own body as part of the work. As Mark Rosenthal keenly observes in his essay Sculpture to Jewelry, “the wearer of a piece of Calder’s jewelry becomes a bizarrely-costumed creature, who is strange or merveilleux (marvelous) in the delightful and fascinating way that was so admired by the Surrealists.”

Is it any surprise, then, that Calder’s jewelry was from the very onset wildly popular and worn by some of the most fashionable and forward thinking artists and women of society? From the 1920s onward, friends and peers such as Georgia O’Keeffe and collectors like Peggy Guggenheim, as well as fashion models and movie stars, all clamored and sometimes risked injury to wear and be framed by Calder’s vision.

The dynamic relationship between kinetic sculpture and humor, decorative motifs including plants and animals, and the totemic power of the fragment all join in Calder’s jewelry and works on paper. Installed together along with historic photographs of famous friends modeling his wearable art, the exhibition at Kukje Gallery powerfully reframes the many vectors of Calder’s art, reconnecting the sculptures to his famous love of the circus and his drawings to his expansive imagination and keen eye for social relationships. Together the works on paper, jewelry, sculpture and toys seen in this exhibition renew our appreciation for the power and magic of one of the twentieth century’s most important artists.

Alexander Calder was born in Pennsylvania in 1898 and attended the Stevens Institute of Technology and Art Students League. He died in New York City in 1976. In the 1920s and 30s he lived and worked in Paris, a peer to some of the 20th century’s most important artists including Jean Arp, Joan Miró and Marcel Duchamp. It was Duchamp who coined the term “mobiles” to describe Calder’s hanging and delicately balanced kinetic sculptures and Arp who suggested “stabiles” to differentiate the sculptures with implied movement.