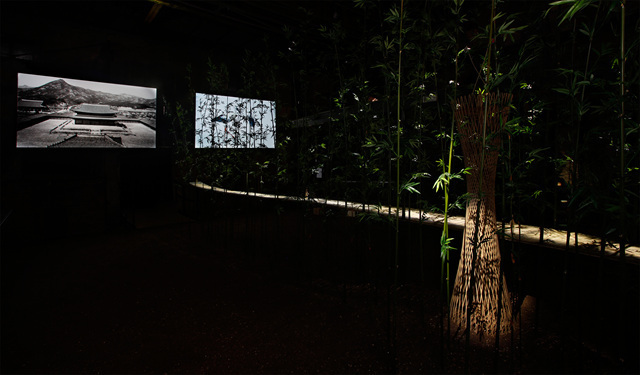 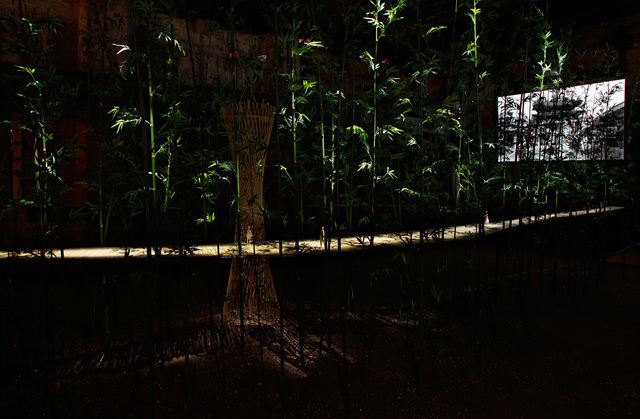 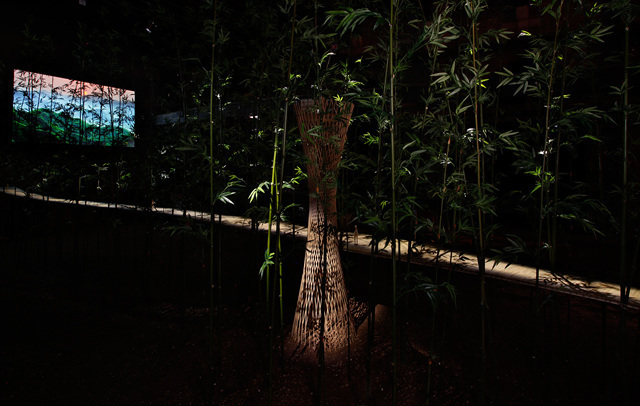 What’s there to be afraid of!
We have light,
we have water,
and the wind is blowing!

A biennial exhibition in Italy, this year’s edition of the International Architecture Exhibition is titled REPORTING FROM THE FRONT. Curated and directed by Chilean architect Alejandro Aravena, the 2016 biennale will discuss the issues and limits people face as the architectural environment continues to evolve on a global level. Focusing on design that improves our quality of life and that integrates social and ecological concerns, the 2016 Architecture Biennale will feature Choi’s pedestrian-oriented Demilitarized Zone (DMZ) Project.

Choi Jae-Eun’s project 夢의 庭園 / Dreaming of Earth was first introduced in November 2015 at a special forum with Pritzker Prize winning architect Shigeru Ban, who collaborated with Choi Jae-Eun to develop the idea. This ambitious long-term project will present its continuously evolving architectural process through scale models, video, various documentations, and audiovisuals. The project is the artist’s response to the Demilitarized Zone – the stark geographic division of the Korean Peninsula¬ – a place that ironically has been designated a biosphere preserve because of its extreme isolation. In development for the past two years, Dreaming of Earth tries to overcome the division and conflict symbolized by the DMZ by celebrating the power of life.

After conceptualizing the overall project, Choi reached out to Japanese architect Shigeru Ban for collaboration. Internationally renowned for his humanitarian work that utilizes natural materials such as paper and bamboo, Ban joined Choi Jae-Eun in her project, seeing it as a perfect opportunity to use design and art to inspire the reunification of the Korean peninsula as well as the preservation of the ecosystem. Shigeru Ban is designing the proposed tower at the pedestrian walkway.

Dreaming of Earth centers around a proposed walkway built three to six meters above the ground, constituting a looped path approximately thirteen kilometers long. Constructed only with natural materials such as bamboo, the structures are designed to become a part of the natural ecosystem. Choi’s design is inspired in part by the obvious need to protect people from the many landmines at the site, where it is estimated to take nearly 500 years for their removal. In addition, it will protect the untouched ecology from human impact. Dreaming of Earth will consist of thirteen floating gardens, an observatory, a seed preservation bank, and a library, all integrated into a visionary plan to both celebrate the DMZ’s wildness while simultaneously promoting reconciliation.

Dreaming of Earth is proposed for a flatland located within the DMZ in Cheorwon-gun, Gangwon-do Province. This area holds historical significance, as the historic ruler King Gungye (857-918), who later founded the kingdom of Goguryeo, chose the site to establish “Daedongbangguk” – meaning the Great Eastern Kingdom – his vision of an ideal community.

Through this project, Choi Jae-Eun hopes to foster the restoration of neglected cultural heritage in the vicinity of the DMZ, and to take steps toward the vision of Korean reunification by reflecting on this historical vision of an ideal community. The artist also proposes that the Gyeongwon railway – built during the Japanese occupation, and connecting North and South Korea – relocate its tracks during its restoration to wrap around the historic Gungye City Wall instead of cutting through it, in order to restore the heritage site.

This ambitious project is accompanied by a series of interviews and talks with professionals who share the artist’s concern for environmental issues as well as social reconciliation. By highlighting this international interest in the DMZ, the artist hopes to build a consensus amongst concerned citizens. In promoting these voices, the artist hopes to engage more people in the issue of peace between North and South Korea, as well as the importance of protecting and preserving the few wild ecosystems that remain around the world.

An archive of the biosphere, including historical documents, will be constructed and presented at the exhibition, providing a chance for people to comprehend the unique political realities that predated the formation of the DMZ. The archive will span the entire twentieth century, from the Russo-Japanese War to the present day.

In concert with the proposed archive, the artist plans to construct a seed bank for the restoration of Dreaming of Earth‘s biosphere. Representing a repository of the ecosystem, Choi envisions the building of a life seed bank and a library as an ongoing living embodiment and record of the landscape. Seeds are vital as cultural and hereditary legacies of evolution, and symbolize the power of life to renew itself.

On March 2015, Dreaming of Earth was submitted to the Ministry of Unification of South Korea, and on November 8, 2015, Choi participated in the “MMCA Global Network Forum” with a talk and discussion with Shigeru Ban titled “Demilitarized Zone: Dreaming of Earth Project”, hosted by the National Museum of Modern and Contemporary Art, Seoul. Having submitted the project to the United Nations in January 2016, the artist has taken a step closer to the advancement of peace on both the Korean peninsula and around the world.

Born in Seoul, Korea in 1953, Choi Jae-Eun immigrated to Japan in the 1970s and graduated from the Sogetsu School in 1980. She was influenced by the members of Fluxus at the Sogetsu Art Center where Japanese avant-garde was based in the 1980s. A student of film director Teshigahara Hiroshi, who received the Special Jury Prize for Woman in the Dunes at the 1964 Festival de Cannes, Choi participated in the production and installation of Hiroshi’s Rikyu (1989). In 1986, Choi collaborated with Isamu Noguchi to present an exhibition titled Earth at the Sogetsu Art Center.

Choi Jae-Eun’s oeuvre spans diverse disciplines including sculpture, installation, architecture, and film. Choi’s work springs from an innovative interpretation of space and the relationship between life and nature and has since expanded its parameters through an experimental approach that combines art and science. She continues to utilize an array of techniques to explore issues of time and existence in series such as the Flower Series and the World Underground Project. Choi participated in the 1993 Daejeon Expo and the Japanese Pavilion at the 1995 Venice Biennale. Since her production of On the Way, a film about Panmunjom – the location where the 1953 Korean Armistice Agreement was signed, pausing the Korean War – Choi has been devoted to exploring the issues that led to the separation of Korea. Having moved to Berlin in 2010, she has been active in her artistic practice including directing the DMZ Project. Major solo exhibitions include the first invitational solo exhibition at the Prague National Gallery (2014); Kukje Gallery, Seoul (2012); and Hara Museum of Contemporary Art, Tokyo (2010). Choi’s work is part of the permanent collections of major institutions such as Hara Museum of Contemporary Art, Tokyo; Art Sonje Center, Seoul; and Prague National Gallery.