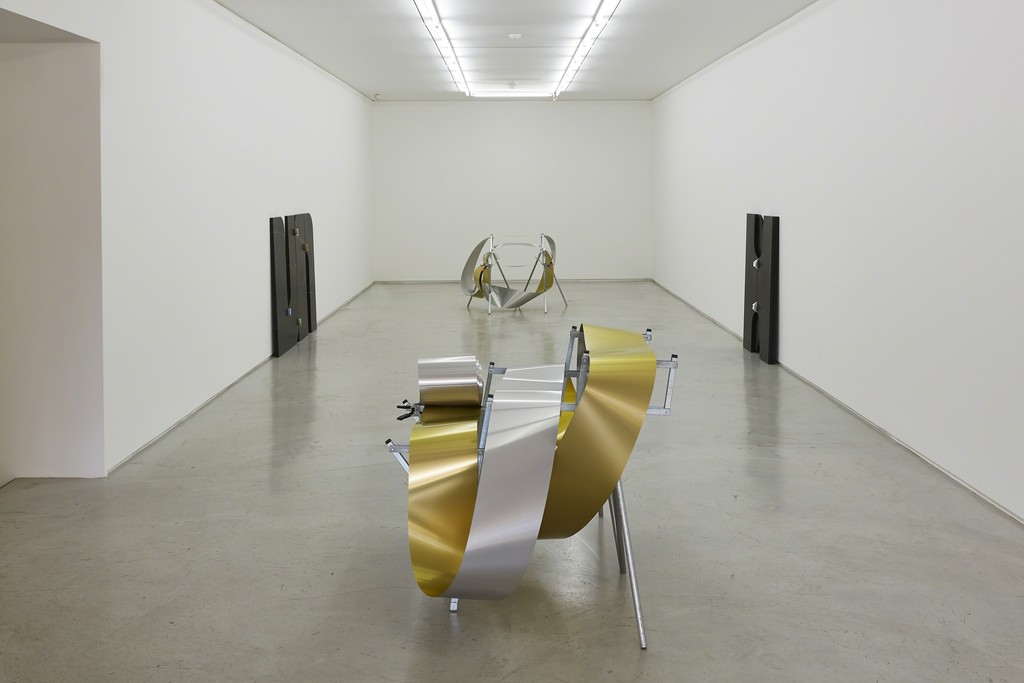 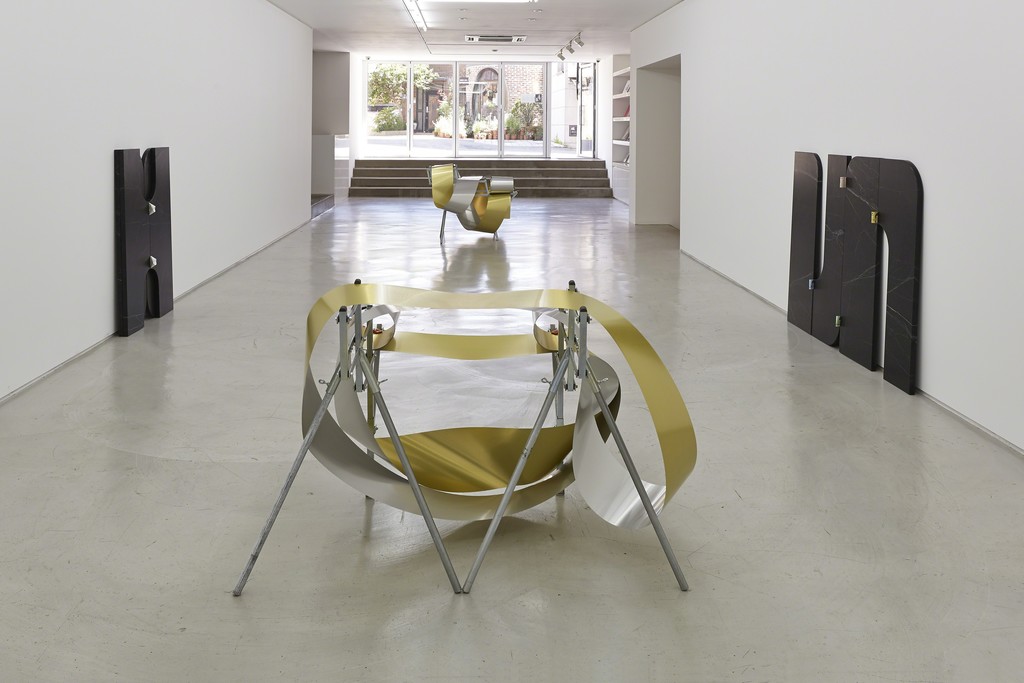 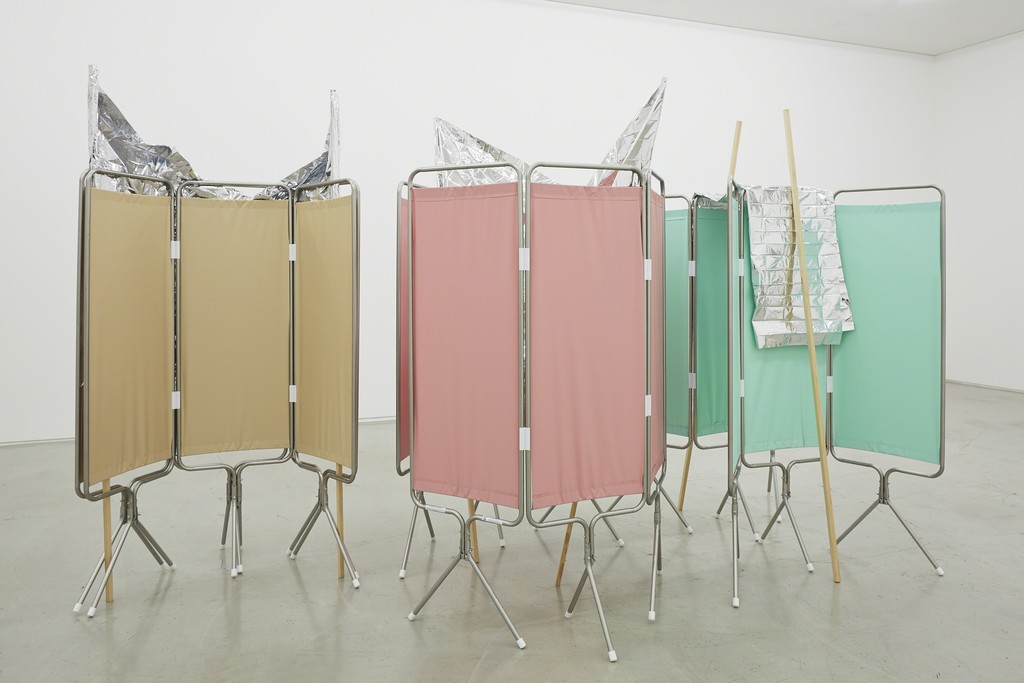 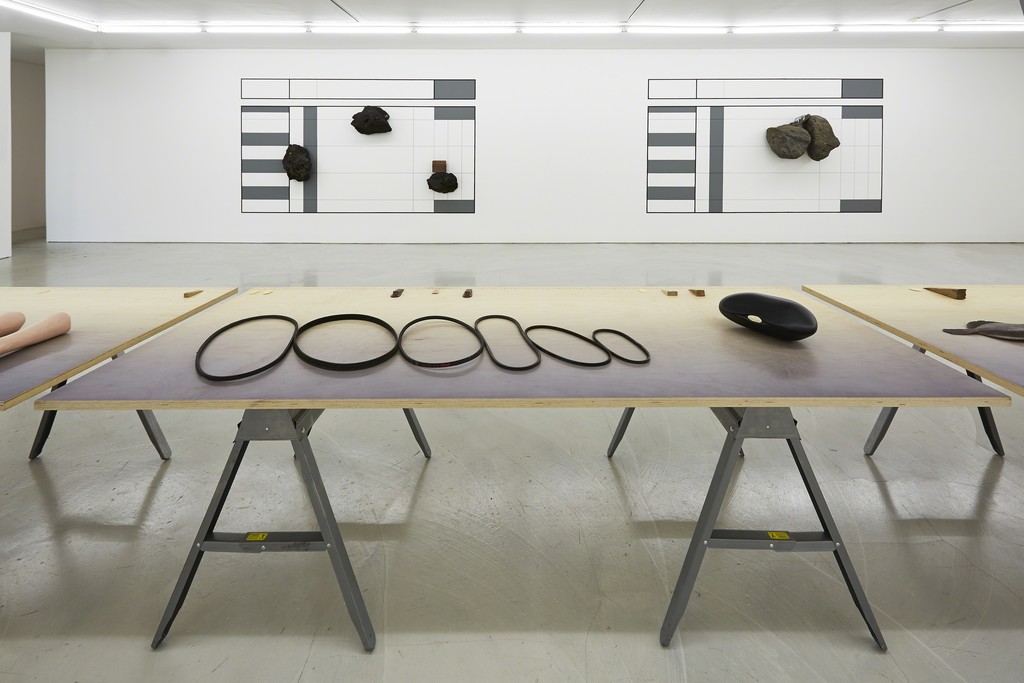 Kukje Gallery is pleased to announce its first exhibition with Gabriel Kuri. Internationally celebrated for his diverse investigations into the form and function of sculpture, Kuri has built a reputation based on intellectual rigor and critical panache. Installed on both floors of K1 gallery, the exhibition will showcase new works made specifically to be shown in Korea and include objects the artist has sourced while in Seoul. Kuri’s work is composed of a broad range of materials including traditional materials such as steel and stone as well as money, found objects, and consumer materials familiar to any shopper. Reflecting the artist’s interest in both social and economic models, he skillfully composes complex arrangements inviting the viewer to question their assumptions about public space and familiar rituals of cultural transaction. This marks the artist’s inaugural exhibition in Korea.

Gabriel Kuri’s sculptures and installations occupy a compelling middle ground both familiar and strange. Interested in the formal and conceptual possibilities of sculpture as well as their psychological impact, his work reflects an ethic of research, where the artist carefully experiments with the implications of different combinations. By framing everyday materials as embodying hidden, sometimes sublimated meaning, Kuri’s work remains flexible, shifting to reflect the preconceptions of the viewer. In this way his work presents an incisive critique of contemporary consumer culture and globalization. According to the artist, “Working with everyday objects allows me to explore the materials to the extent of their being unpredictable yet essential, incomplete yet sufficient materially; and by embodying the richness of time without bypassing it, they truly evoke the significant features of ideas and possibilities.” While each individual work functions as a discrete sculpture, Kuri is equally interested in the dynamic that occurs between his works and their site, thereby creating a kind of three-dimensional semantic puzzle.

Installed on the first floor two related works perfectly illustrate the artist’s ingenuity and engagement with formal tropes. Made from polished marble and Korean paper currency, Won Won (2015) consists of four pieces of cut and polished marble between which are stuck denominations of money. Arranged in a seemingly random array, the subtle hues of the folded bills suggest a kind of musical score, rising and falling across its face. Coupled with a second companion work Stock Stock (2015) into which white paper cups are stuck in the marble’s intersections, the two pieces provide a jarring and humorous juxtaposition of modernist sculptural elements with everyday symbols of human transaction. This strategy reflects Kuri’s mastery of forms, holding a poised tension between traditional art materials and the detritus that defines everyday life.

Adjacent to this work is another piece titled Looping Trajectory through Collapsible Mountain 01 - 01 (2015) and Looping Trajectory through Collapsible Mountain 01 – 02 (2015) which consist of colored aluminum rolls supported on steel display stands. Designed to display goods at a market, the aluminum rolls rise and fall around this adjustable armature, evoking both irrational exuberance and, perhaps, a baroque moment. Installed together, these works suggest the dichotomy of soft and hard materials and structures, suggesting another leitmotif of the artist, who often uses balance and pressure points to construct his work.

Also in the first floor gallery will be a major work Privacy Standards (2015) consisting of metal privacy screens. Familiar to anyone who has had to disrobe in a doctor’s office, these screens are coupled with a familiar Kuri object—two sticks supporting an aluminum blanket. The artist refers to this recurring sculptural form as a “Quick Standard,” alluding to its resembling a political placard. Together, the installation forms a micro drama, evoking intimate tensions of revelation and concealment that are completed by the viewer who walks in and amongst this installation.

The final two works in this gallery further point to the vicissitudes of economics. Titled Compromised Vertical Growth (2015) and Insulated Horizon Loop (2015), these pieces play with the opaque language used by economists to describe market forecasts.

Installed on the second floor, the artist has installed an organic sculpture on four aligned custom designed worktables each of which have been painted with a subtle gradation and overlaid with gridded measuring lines. Titled Punctuation Matrix (2015), the work resembles a laboratory or research environment. Arranged on the tables the artist has carefully placed objects collected both locally and on his international travels. In this way, they evoke the conceptual investigations of the artist and set the stage for a less formal query about what is and what is not art in today’s marketplace. They are in the artist’s words, an illustration of what is “going on in my head.”

On the walls surrounding the tables Kuri has installed two works titled Probability Chart K1 (2015) and Probability Chart K2 (2015) that consist of a series of large rocks that appear to be embedded into the plaster. Painted directly onto the walls beneath the rocks is a large grid pattern, again alluding to research and empirical measurement. Hanging casually atop the rocks the artist has included some clothing, further conflating an environment that suggests both a casual swap meet and something more complex. For Kuri, this installation explores the formal cadences of taxonomy and the way ordering principles determine both everyday environments and the values we assign objects.

A far-reaching and ambitious exhibition, the works on the two floors of the K1 gallery provide an unprecedented opportunity to reflect on one of today’s most challenging and important artists.

Gabriel Kuri was born in Mexico City in 1970 and studied Visual Art at National School of Arts, U.N.A.M. in Mexico. He received M.A. from Goldsmiths College in UK in 1995. Key solo exhibitions include Momento de Importancia, Museo Rufino Tamayo, Mexico City, Mexico (2000); Start to Stop Stopping, Museum of Contemporary Art, Antwerp, Belgium (2003); Join the Dots and Make a Point, Kunstverein Freiburg, Freiburg, Germany (2010); Gabriel Kuri: Before Contingency After the Fact, South London Gallery, London, UK (2011); Gabriel Kuri, Bergen Kunsthall, Bergen, Norway (2012); Gabriel Kuri: All Probability Resolves Into Form, The Common Guild, Glasgow, UK (2014); and Gabriel Kuri: with personal thanks to their contractual thingness, Aspen Art Museum, Aspen, Colorado (2015). He showed his work at the 50th Venice Biennale in 2003. Also, he was commissioned to create the visual identity for the 2011 Armory Show in New York City. His works are included as public collections of prominent institutions including Centre Pompidou in Paris, The Hammer Museum in Los Angeles, Museum of Contemporary Art in Chicago, Museum of Contemporary Art in San Diego, Tate Modern in London, and Walker Art Center in Minneapolis. Gabriel Kuri currently lives and works in Los Angeles.

Gabriel Kuri is known for incorporating a range of detritus and found objects into his practice, combining man-made and organic materials to hint at a borderless global economy of objects. His interest in ubiquitous objects partly stems from the fact that, as signs of transactions, they acknowledge our participation in consumer society. Like other contemporary artists working with everyday materials, Kuri is generally indebted to the work of Marcel Duchamp and the legacy of “Readymades” that stems from the early 20th century. Building on this tradition Kuri has expanded the filed even further, all the while maintaining an incisive critical voice.