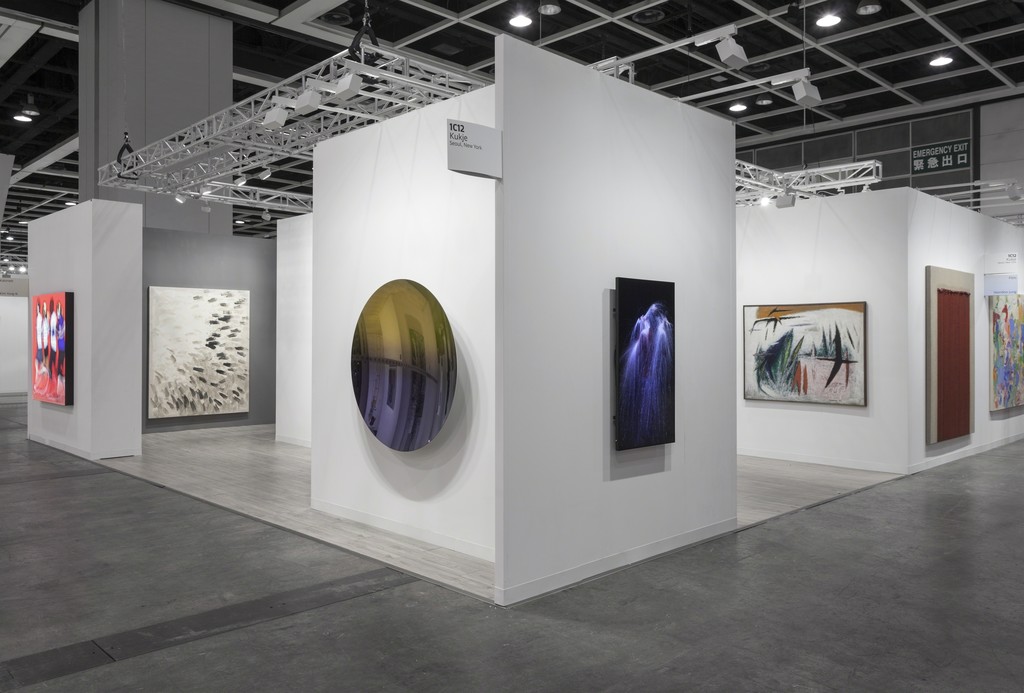 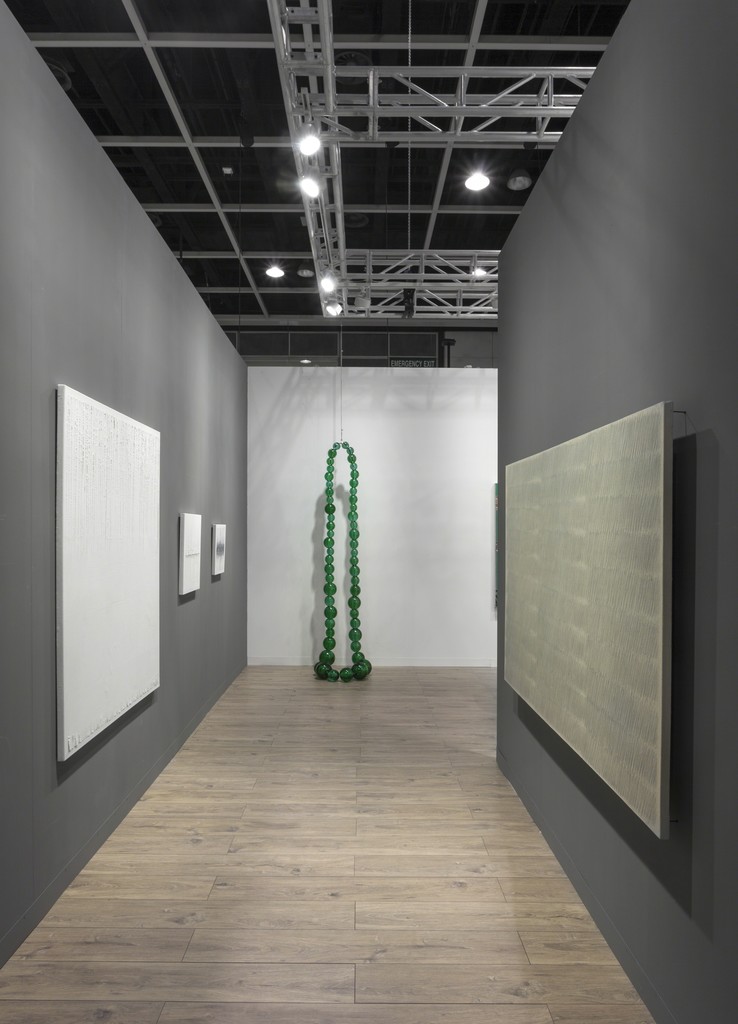 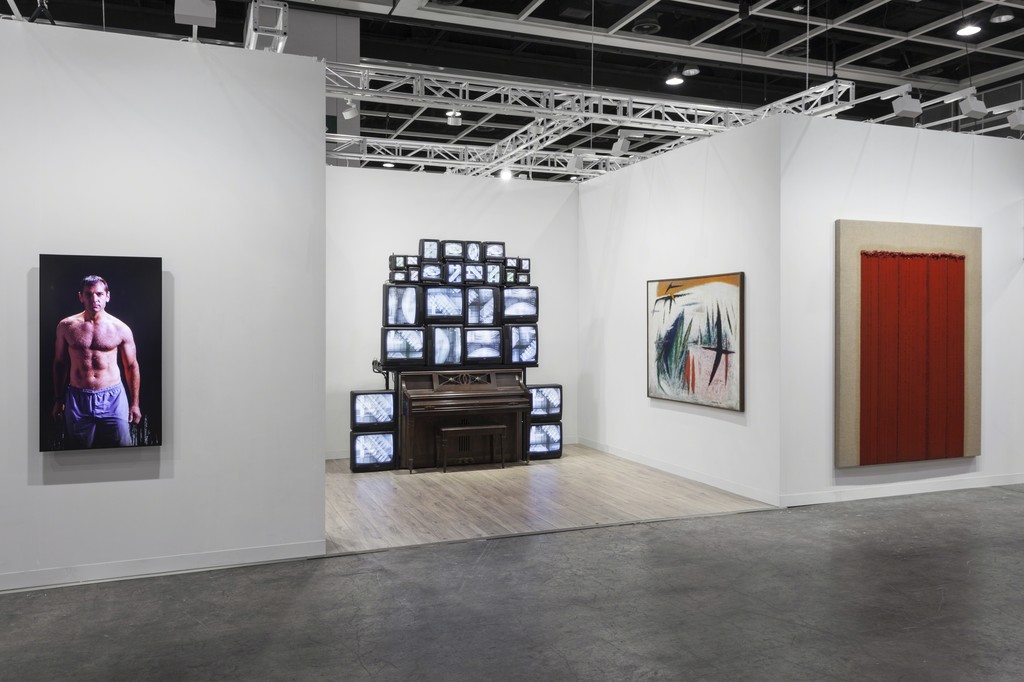 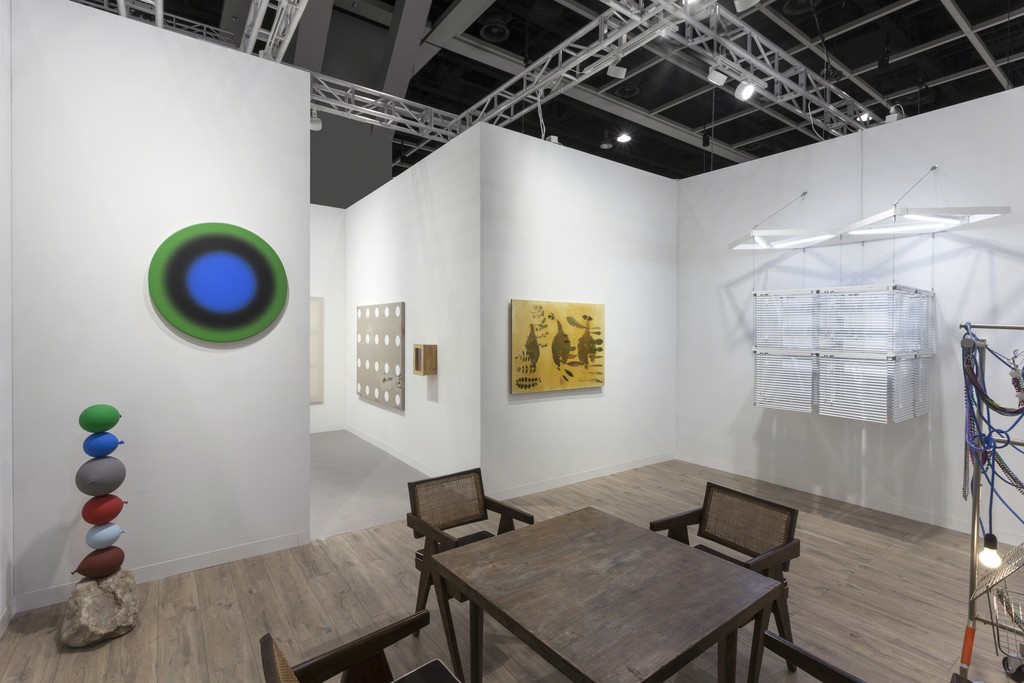 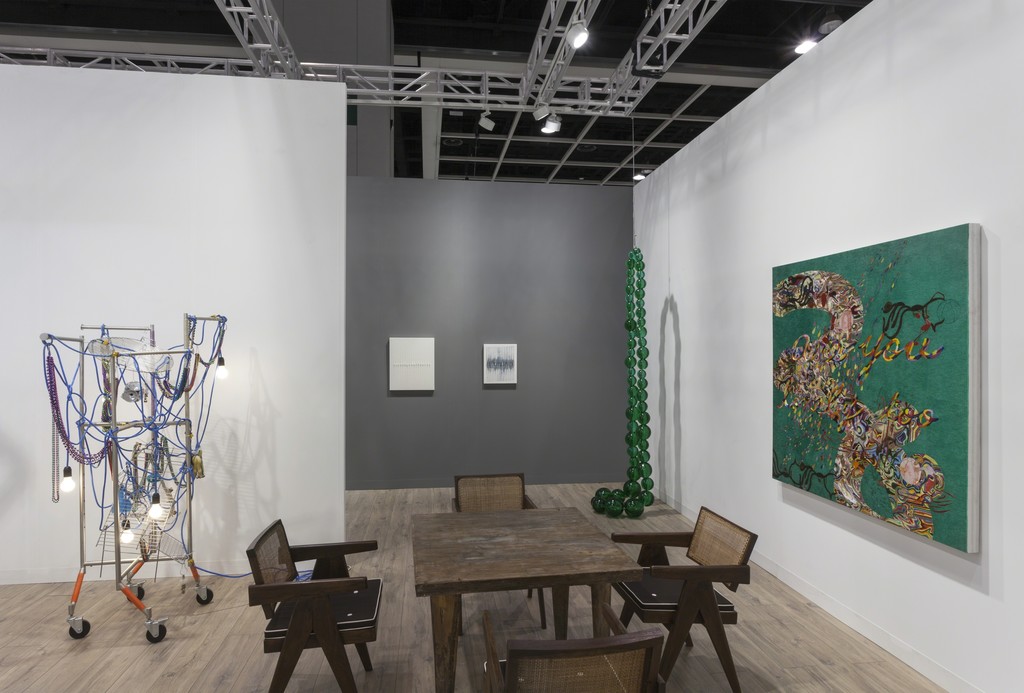 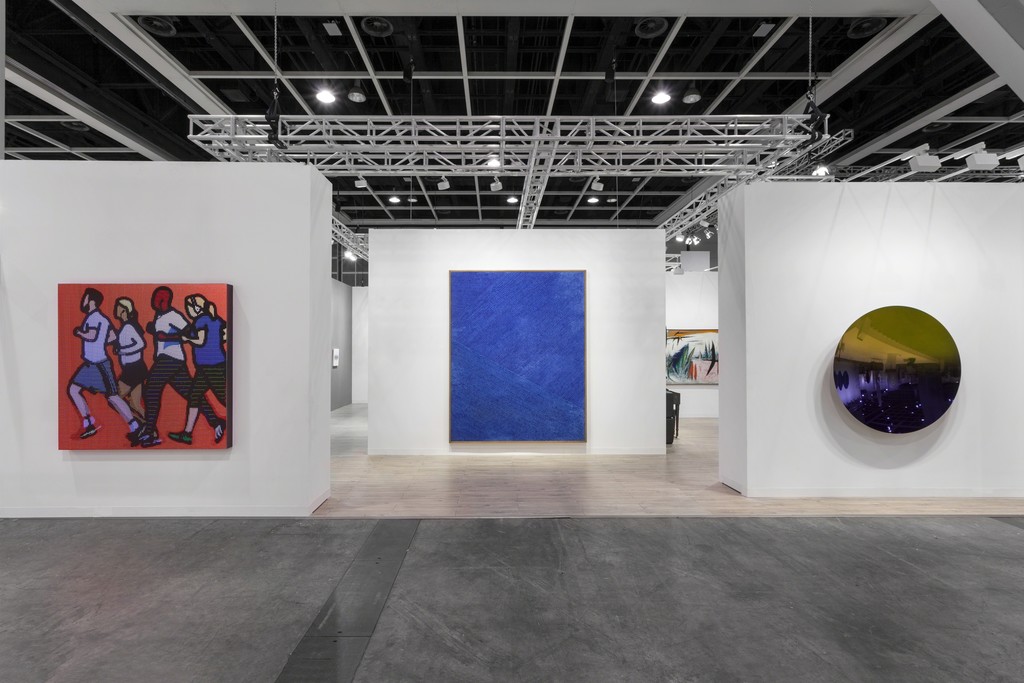 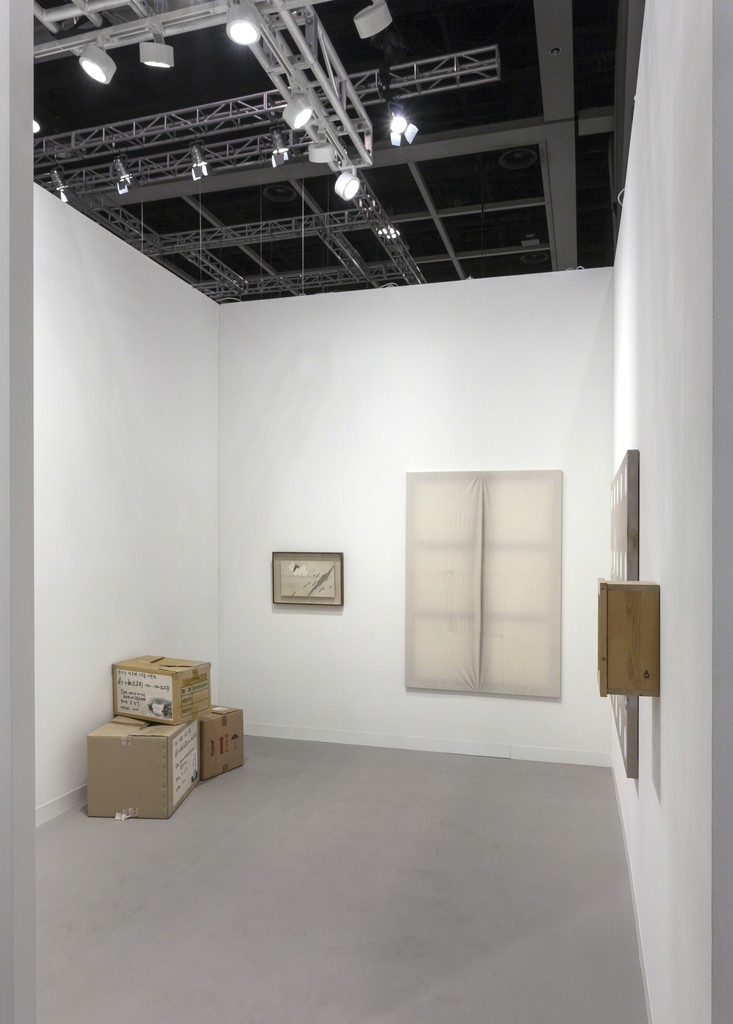 Kukje Gallery will participate in the 6th edition of Art Basel Hong Kong at the Hong Kong Convention and Exhibition Centre (HKCEC) from March 29 to 31, 2018. Inaugurated in 2013, this iteration of Art Basel Hong Kong will feature 248 top-tier galleries from 32 countries. Kukje Gallery is pleased to present a booth featuring both Korean and international modern and contemporary masters; in addition the gallery is proud to announce that Kim Yong-Ik has been chosen to exhibit in the Kabinett sector and Yeondoo Jung has been selected for the Film sector, curated by the acclaimed writer and curator Li Zhenhua.

These sector spotlights on Kim and Jung are complemented by a curated selection of artists in the Kukje booth whose work provides vital context. Kukje Gallery will present works by leading Dansaekhwa artists including Park Seo-Bo, Ha Chong-Hyun, Lee Ufan, Chung Sang-Hwa, and Kwon Young-Woo, as well as highlight preceding and subsequent generations of Korean modern and contemporary artists such as Kim Whanki, Haegue Yang, Gimhongsok, Wook-kyung Choi, Lee Kwang-Ho, and Kyungah Ham. The gallery’s booth will also include select works by an international roster of artists such as Anish Kapoor, Nam-June Paik, Candida Höfer, John Chamberlain, Ugo Rondinone, Julian Opie, Bill Viola, Michael Joo, and Jean-Michel Othoniel. Of the exhibited artists, Haegue Yang will hold a major mid-career survey exhibition from April 18 to August 12 at Cologne’s Museum Ludwig that examines the trajectory of her practice from 1994 to the present, while Candida Höfer will hold her highly anticipated solo exhibition at Kukje Gallery this summer.

Kim Yong-Ik for Kabinett sector
Kukje Gallery is thrilled to present the work of Kim Yong-Ik for the Kabinett sector. This historical overview follows Kukje Gallery’s acclaimed exhibition of Kwon Young-Woo’s archive in the 2017 inauguration of the sector. Using a similar art historical framework, Kim Yong-Ik’s work will be organized in three periods, spanning his more than four-decade career. These include his Plane Object series of fabric works from the 1970s, the geometric compositions from the 1980s, and the dot paintings from the 1990s. Rooted in the traditions of modernist painting, Kim’s reflexive practice questions the relationship between the avant-garde and society. Maintaining an independent stance amidst Korea’s dominant artistic movements—from modernism and conceptualism of the 1970s to the Minjung (populist) art movement of the 1980s—Kim uses the mediums of drawing and painting as a starting point for unveiling both the structure and the contradictions of modern art and its institutions. Kukje Gallery’s second Kabinett showcase underscores the gallery’s enduring commitment to showcasing artists whose work have been instrumental in the development of Korean art.

Kim Yong-Ik (b. 1947) first unveiled his Plane Object series in 1974 while under the tutelage of Park Seo-Bo at Hongik University’s Department of Painting. In 1981, just as he began to establish his name with this series, Kim made a bold decision to “bury” his work in a cardboard box and present it as is. During the 1980s and 1990s, while the domestic art scene was strictly separated into Minjung art movement and modernism, Kim sought to retain a middle ground by actively engaging in environmental and public art projects, all the while producing important writings that developed his artistic philosophy. From 1999 to 2012, Kim was a professor in the Painting Department of Gachon University’s (former Kyungwon University) College of Art and Design. He also served as a founding member of Art Space Pool, an alternative space established in 1999, and then as its director from 2004 to 2006. Kim was the subject of a comprehensive retrospective that examined his 40 year-long practice at Ilmin Museum of Art in 2016 and held exhibitions at Kukje Gallery in 2016 and Tina Kim Gallery in 2017. He also held a two-part solo exhibition titled I Believe My Works Are Still Valid at Spike Island in Bristol and the Korean Cultural Centre UK in London last fall. To coincide with and complement his archival showcase at Art Basel Hong Kong's Kabinett sector, Kim Yong-Ik’s second exhibition with Kukje Gallery will be on view from March 20 and will show a range of approximately forty never-before-seen “drawings” that have served as the bedrock of his practice over almost forty years.

Yeondoo Jung for Film sector
Kukje Gallery’s first presentation in the Film Sector for Art Basel Hong Kong will center on Yeondoo Jung’s video work titled Building Recollections (2016). The work is created by combining thousands of individual photographs of mostly decrepit buildings in planned redevelopment zones in Seoul. These images are then projected on a screen forming a rolling composite and thereby collapsing the real imagery with a space that appears to be a movie set or theater stage. Evoking previous works by Jung such as his acclaimed video Six Points, the montaged images depict scenes of ordinary activity that appear both real and staged. The camera slowly pans along the street and buildings recording the meticulously edited composite projection. This ghostly montage is accompanied by audio monologues of people who live in those areas. The images are intricately interwoven with past memories that are deeply personal yet also invoke the universal notion of home, creating a peculiar spatial and temporal frame within the video and a unique narrative structure that captures the disruption and rapid change in Seoul.

Yeondoo Jung (b. 1969) is an artist whose practice encompasses photography, sculpture, performance, and video, often revolving around interactions that organically arise from his meetings with everyday people. Jung is a storyteller who weaves captivating narratives that precariously teeter between reality and fantasy, often incorporating elements from one into the other. Jung’s overarching mastery of diverse mediums stems from his background in photography and sculpture; the artist received his BFA in Sculpture from Seoul National University and a MFA from Goldsmiths, University of London. The artist has been the subject of numerous solo exhibitions all over the world, including the Norton Museum of Art in Palm Beach, Florida (2017), Maison Salvan in Labège, France (2016), Art Tower Mito in Japan (2014), and Plateau, Samsung Museum of Art in Seoul, Korea (2014). Jung has also participated in international biennales including Manif d’art – The Quebec City Biennial (2017), Shanghai Biennale (2010), Seoul International Media Art Biennale (2009), and Venice Biennale (2005). The artist also participated in the 15th International Architecture Exhibition at Venice Biennale in 2016, for which he debuted Building Recollections (2016). Jung will be part of a group exhibition titled (In)tangible Reminiscence from March 24 at the Centre for Heritage Arts & Textile in Hong Kong and will debut a new video work based on the story narrated by an elderly Chinese woman who migrated from Shanghai to Hong Kong in the 1950s and worked in the textile industry for decades.

Gimhongsok at Harbour Arts Sculpture Park
Gimhongsok's Bearlike Construction (2012) is currently on view at Tamar Park as part of Harbour Arts Sculpture Park, Hong Kong's first international sculpture park project that features sculptures by emerging and renowned local and international contemporary artists on the city's iconic harbourfront. On view through April 11, Bearlike Construction challenges the politics of ethics and sensibility—or the politics of how objects are perceived—by way of its perceived medium and form. Gimhongsok's practice utilizes peripheral materials as the "main subject" in his work in order to overturn the widely acknowledged belief that the artwork acts as the primary agent, highlighting this hierarchical situation through a dualistic confrontation of subject and periphery. A reflection of the artist's philosophy, Bearlike Construction takes on the form of an assemblage of discarded plastic bags, whose material, meaning, and form can unexpectedly be altered by an anonymous passerby.

Asia Society Names Park Seo-Bo as ‘Asia Arts Game Changer’ for 2018
Asia Society has named Park Seo-Bo as an honoree of the Asia Arts Game Changer Awards Hong Kong for 2018. The Asia Arts Game Changer Awards Hong Kong, organized by the nonprofit organization Asia Society, is a signature gala celebration honoring major artists, collectors, gallerists and art professionals for their significant contributions to the Asian arts. For Park’s nomination, the Asia Society has commented, “Park Seo-Bo is a seminal figure in Korean contemporary art and a founding member of the Dansaekhwa movement in the 1960s, which defined postwar Korean abstract painting. Park is best known for his ongoing Ecriture series which he began in 1967.” Other honorees include the Indian artist Subodh Gupta, the multidisciplinary Iranian artist Shirazeh Houshiary, and the Taiwanese sculptor Ju Ming. This year’s gala event will take place on March 29 at the JW Marriott Hotel Hong Kong.