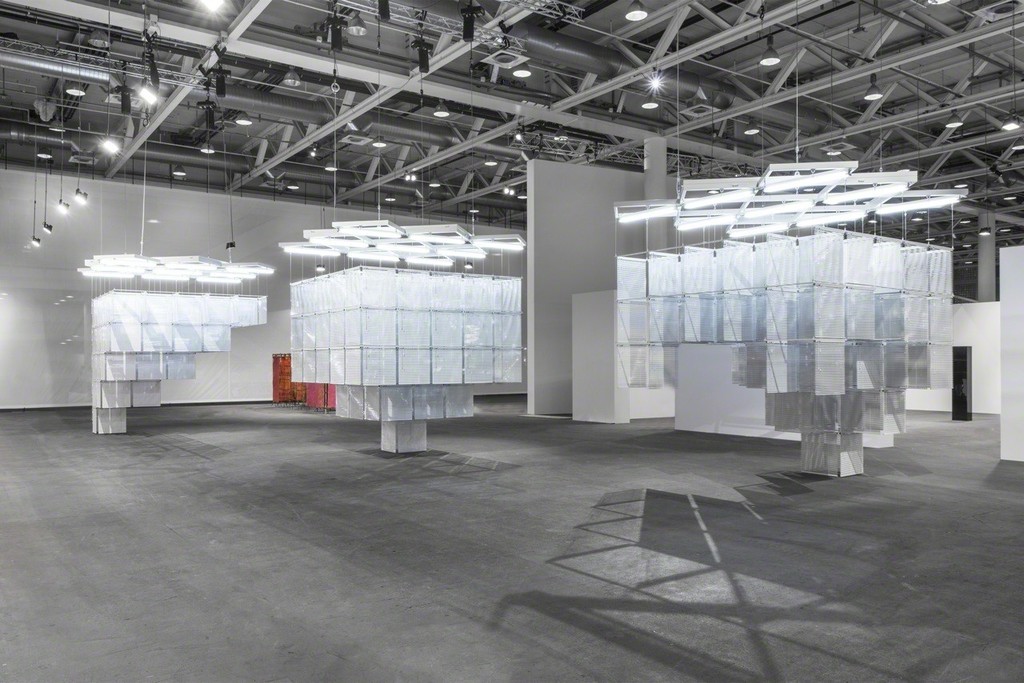 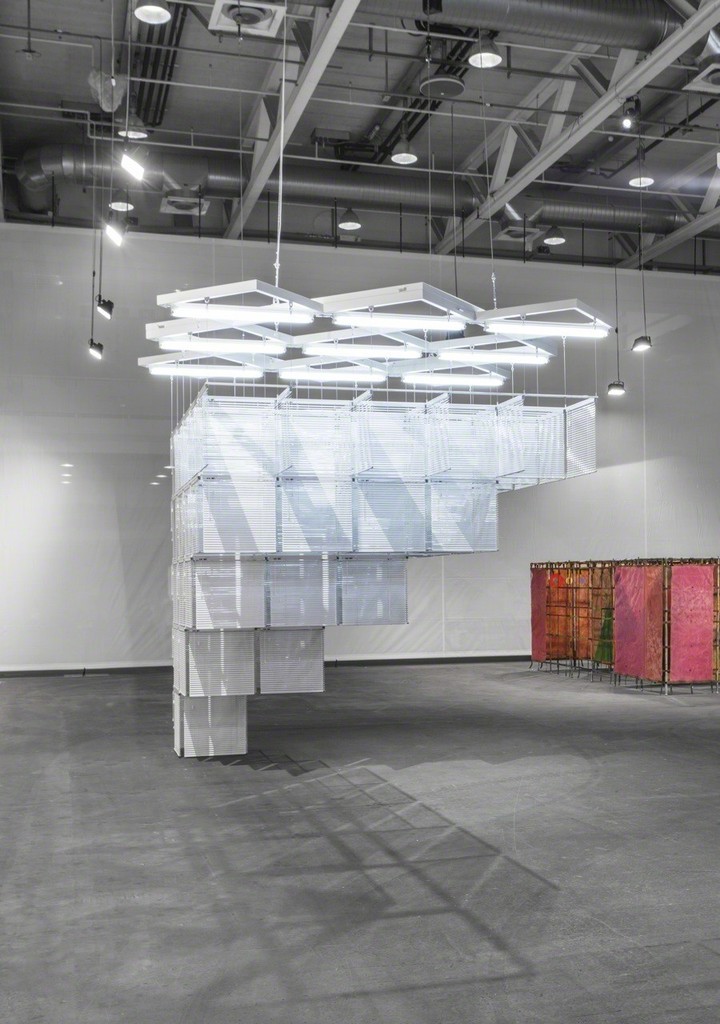 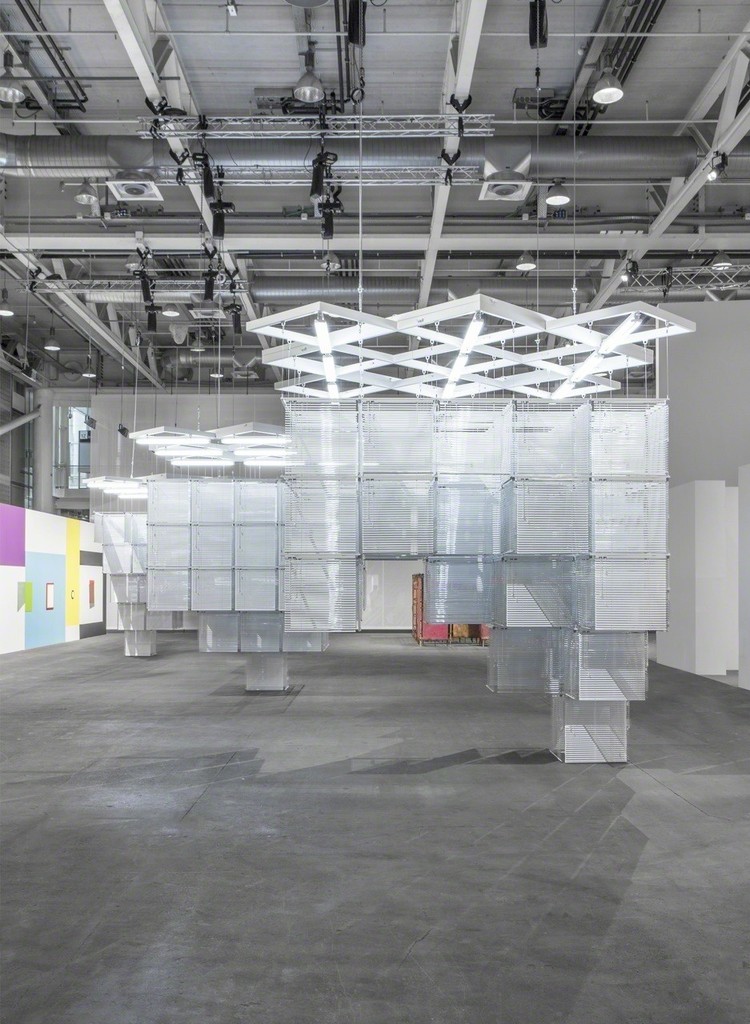 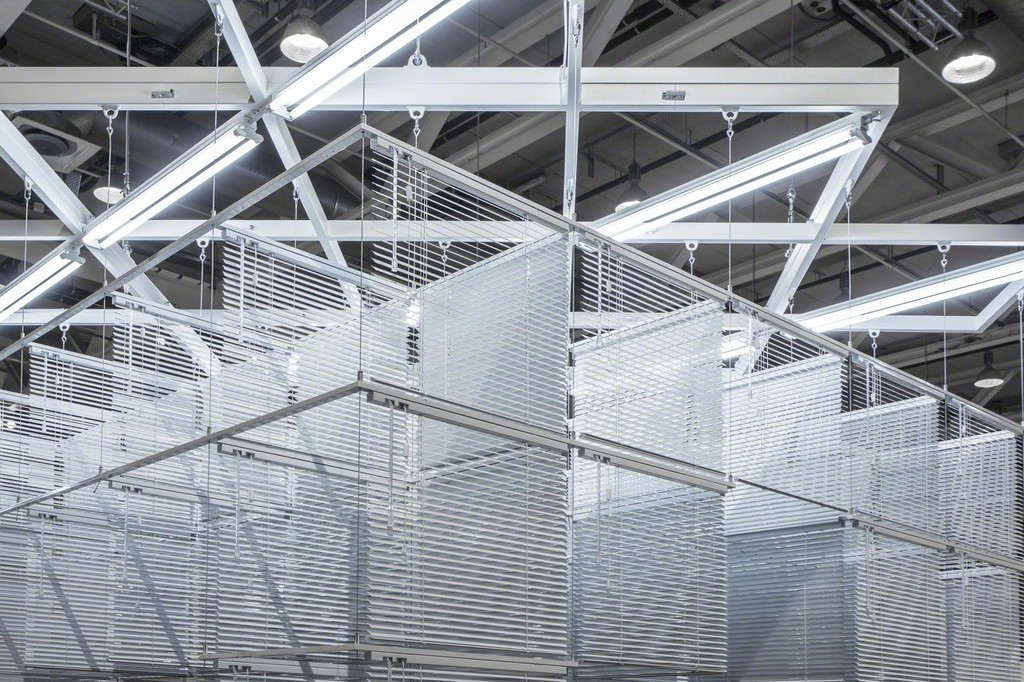 We are happy to announce Haegue Yang is participating in Art Basel’s Unlimited Sector from June 16 to 19, 2016. This year marks the artist’s third participation in Unlimited at Art Basel, and in the 2016 edition Yang will present the major work from her series Sol LeWitt Upside Down, from 2015.
 
Sol LeWitt Upside Down – Structure with Three Towers, Expanded 23 Times, Split in Three (2015) is composed of more than 500 individual Venetian blinds. Directly referencing the form and composition of Sol LeWitt’s major work Structure with Three Towers (1986), Yang’s sculptural interpretation is expanded 23 times and hung upside down. The work recreates one of LeWitt’s signature works from 1986—connecting LeWitt’s oeuvre to Yang’s own attempts to be liberated from the urge to compose, and the way modular thinking leads towards proliferation. This will be the third iteration of the work presented in a major venue. The first showing was Yang’s solo exhibition Shooting the Elephant 象 Thinking the Elephant at Leeum, Samsung Museum of Art in 2015 where a single array was displayed. The second was in September of the same year at the Lyon Biennial; in this exhibition the work was split into three individual forms with fluorescent tube installed on top.
For her installation at Art Basel the work is again divided into three monolithic forms composed of blinds, however, it now hovers very close to the floor. By lowering the entire sculpture to eye-level, the work physically occupies its site and suggests a free-standing sculpture. The blinds, forming intersecting planes, create layers and discrete groupings where the play of light and shadow changes depending on the angle of approach. Appearing opaque and then translucent, Sol LeWitt Upside Down creates an immersive environment that plays with familiarity but resists being perceived as a definitive object, a hallmark of Yang’s current work using Venetian blinds.

In addition to her exhibition at Art Basel, Haegue Yang is preparing a major new work for the second Sonae | Serralves Commission at the Serralves Museum of Contemporary Art in Porto, Portugal, June 22 to December 18, 2016. Installed in the middle of the gardens at the Serralves Park, the artist will present a new work titled An Opaque Wind Park in Six Folds. The work, covering nearly 70 square meters is composed of five architectural fragments topped with industrial vents in various dimensions. Resembling the iconic arched entrance of Islamic architecture, the tower-like forms differ in design but occupy the same square footage and connected by paving stones set in a geometric layout. In this ambitious work the artist was inspired by In the artist’s sculptural approach, the layout of Islamic symmetric geometry is conventionalized in the form of the hexagon as six point geometry – by joining the intersections or folds of six circles, the basis of Yang’s decorative pattern is formed. This pattern, notably in hexagon form, are in the unit size of approximately 72 x 72 cm and raised to different heights to become either a slab or a tower. The bricks are constructed from clay-fired bricks in three subtle colors, ranging from yellow (which predominates) to two tones of grey, light and dark.
 
An Opaque Wind Park in Six Folds invites the viewer to walk around its hybrid landscape, and in between its multiplying structures. A birdbath, and diverse types of plants and vegetation embellish the magical space that will frame a full cycle of growth and decay over the duration of the work’s installation. Sensory elements such as air temperature and wind will also become significant parts of Yang’s installation, and combine with the presence of the turbine vents to confuse nature and design. Inspired by the traditional wind towers used in buildings in the Arabian and Persian Gulf to cool interiors, the artist first referenced the vents in her installation An Opaque Wind at the 12th Sharjah Biennial in 2015—a work that reflected her interest in different histories of industrial production and associations with stability and universality. In An Opaque Wind Park in Six Folds, this method is integrated as a decorative element to its towers. Their significance within the complex of towers, brick, and wildlife further highlights the work as an expression of communities and the interrelations that is required for co-existence in today’s globalized age.

The Sonae | Serralves Commission aims to promote culture and bring art closer to the community and is the only program of its kind in Portugal. The Commission is a collaboration between the Serralves Museum of Contemporary Art, Portugal’s leading museum for contemporary art, and Sonae, a multinational company specializing in retail and telecommunications. The Serralves Museum, founded in 1999, fosters understanding and appreciation of contemporary art and culture in Portugal and the world through its exhibitions, publications, and public programmes.
Haegue Yang will also hold her much-anticipated solo exhibition Lingering Nous at the Centre Pompidou in Paris from July 5th to September 5th, 2016 presenting a new blind installation work and four older video essays. Yang returns to colorful blind constructions enhanced with additional LED tubes at the Forum of the Centre Pompidou. In time with the catalogue launching and Foire Internationale d’art Contemporain (FIAC), a conversation with the artist will be held at the Pompidou centre auditorium on October 21st, 7:00 PM.