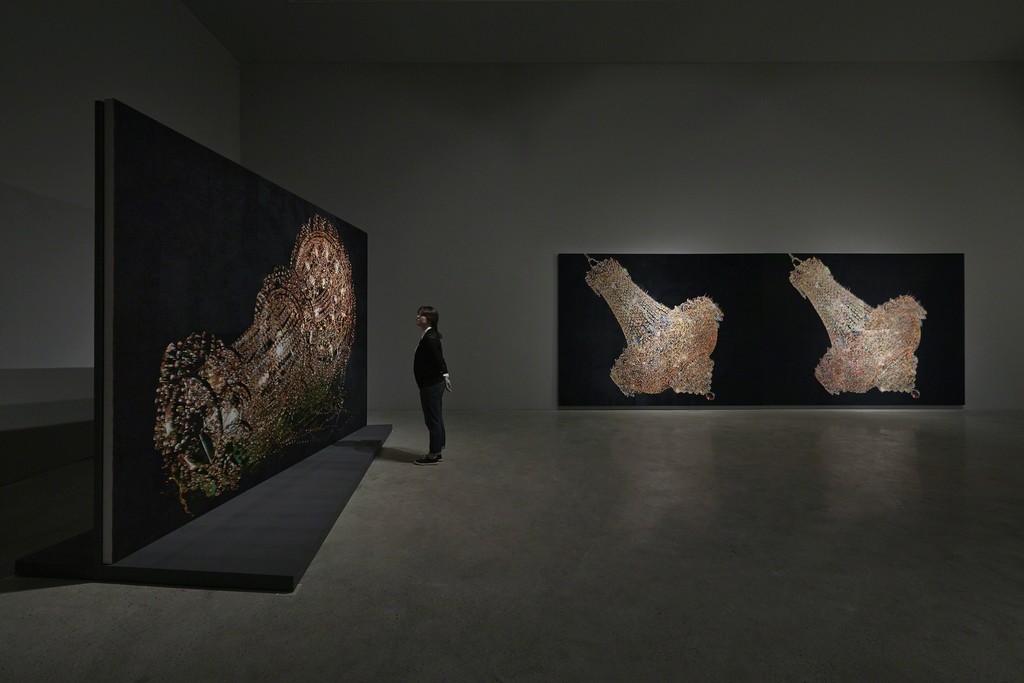 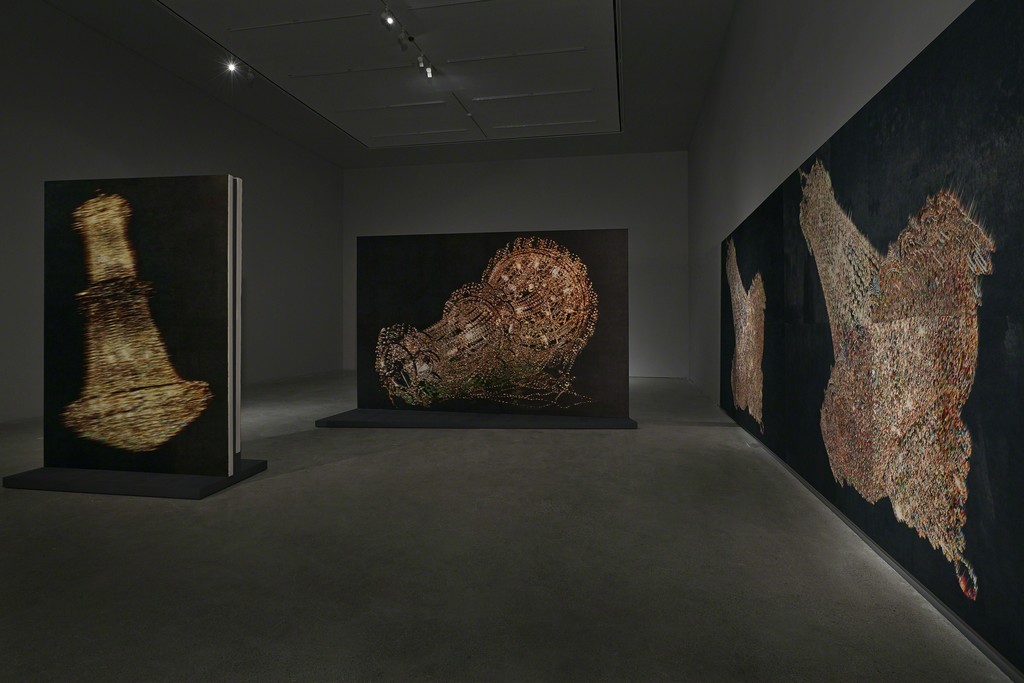 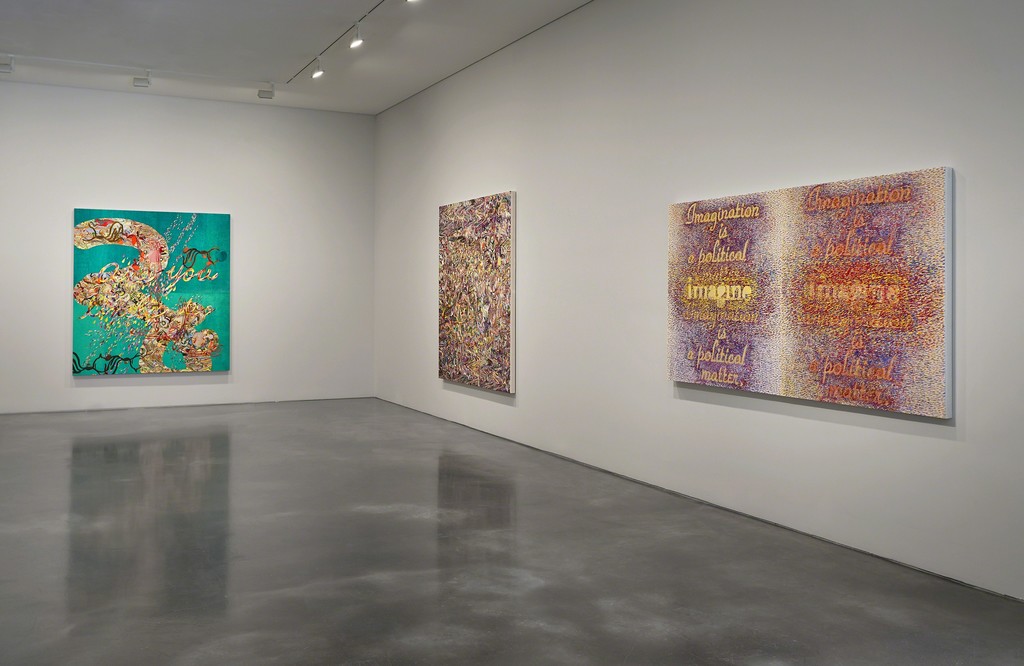 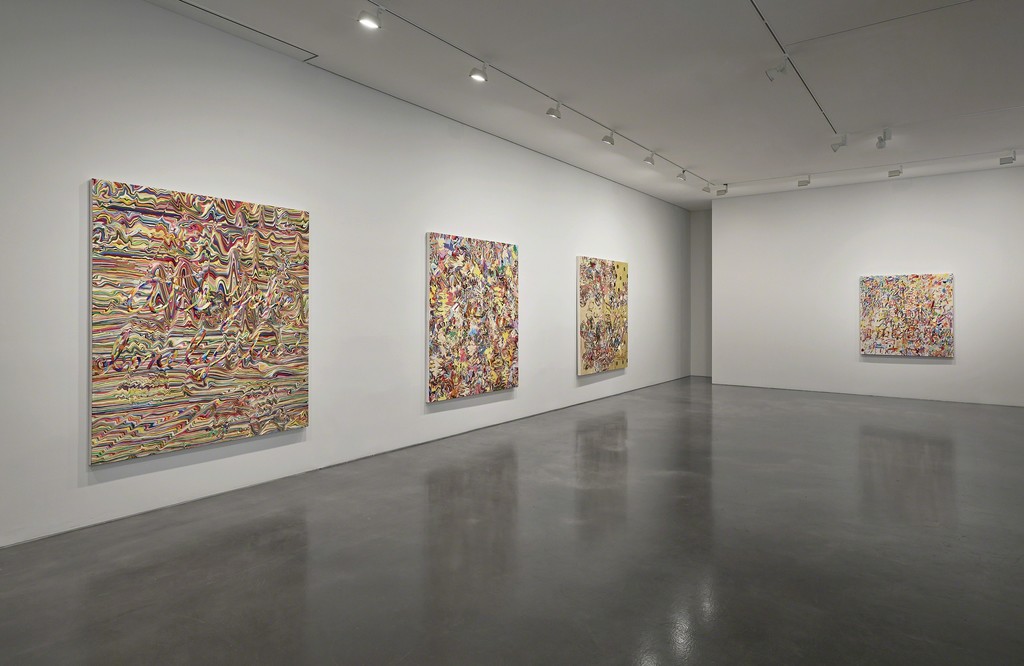 Kukje Gallery is pleased to announce the first solo exhibition of Kyungah Ham at Kukje Gallery. Well known in Korea and internationally as an artist whose diverse practice investigates the political issues facing contemporary Korean society, the artist bravely confronts both memory and history. Ham engages the subjects of nationhood and identity, framing larger questions of social value and progress with poetic works of great beauty. For her solo exhibition titled Phantom Footsteps, the artist will install 18 large-scale abstract embroidery paintings about power and desire in both K2 and K3.

Ham began using textiles in 2008 with her work Flyer/Byongpoong Bill 01 and debuted Such Games series at the 6th Asia Pacific Triennial of Contemporary Art. In these works the artist engaged directly with the atomic bombings of Hiroshima and Nagasaki and reproduced iconic images of that event using hand embroidery. Ham later produced Some Diorama and Some Sunday Morning, composites of images and articles on war that she collected from the print media and the Internet. In this work the artist embarked on a complex process of fabrication that involved collaborating with artisans in North Korea. The process involved her taking images and articles through intermediaries to textile workers who then copy them—thereby being exposed to information long suppressed by the North Korean government. By working with these artisans, Ham is able to not only establish an alternative way of communicating with the isolated country but also show the stark differences and massive economic gaps between the North and South. In this way the subject matter and method of manufacturing join together in a seamless critique of power structures and the arbitrariness of personal liberties in the 21st century.

The new works in K2 recall a kind of postmodern narrative painting, mixing decorative and psychedelic imagery with lyrics from familiar songs and metaphoric language. Embroidered instead of painted, the textiles hover between allegory and entertainment conflating the strict lines of argument that defined ideologies of the past. Using appropriated images and texts, Ham re-contextualizes their histories to establish alternative interpretations of the value hierarchies that govern everyday life. In this way the work blurs the personal and political. A recurring motif in the artist’s work is her investigation of the intersection between historical events and personal experiences. Characterized by Ham’s imaginative visual language, this framing of material culture serves as a harsh indictment of contemporary Korean culture. Through the use of satire and uncanny juxtapositions of personal and political imagery, Ham reclaims forgotten or ignored histories, confronting her viewers with these marginalized voices and opening long ignored facets of Korean history. Despite her critical methodology, Ham’s work avoids being bombastic, and instead the topical work deftly challenges societal stereotypes of political representation.

Installed in K3, the five embroidery works from a new series titled What you see is the unseen / Chandeliers for Five Cities depict a giant chandelier. This grandiose and decorative chandelier illustrates political power, directly referencing the post WWII split between North and South Korea. Following WWII, the Korean peninsula was divided de facto into the North and South, with North Korea under the control of China and the former Soviet Union and South Korea under the trusteeship of the United States. Framing one of the most seminal events in Korean history, the chandelier serves as a mute witness to the moment when Korea became an embattled spoil caught between the superpowers. Hanging perilously and askew, the image reminds us of the aura and social space dominated by the superpowers at the center of world history, further implying the imperfection or collapse of colonial ideologies. Despite its collapse, the fallen chandelier suggests the still persistent ideological conflict and divisions that exist—as if alluding to the influence still cast by history. Although chandelier is the only image apparent in the series, the artist’s intent is to evoke the people who are living within the divided history. In this way each minute stich remains as a testament to an individual laborer.

One of the attributes of the embroidery is that it can hide and reveal bits of information, thereby functioning like a coded language. Ham uses this intentionally, not only by encoding bits of taboo information in the imagery but also as a leitmotif. This is perfectly illustrated by What you see is the unseen / Chandeliers for Five Cities wherein subtle images are visible in the reflection. One of these speaks directly to Ham’s inspiration, an image of a young boy holding a pistol. According to the artist, this image was inspired by a chance viewing of a young North Korean boy whose face was revealed momentarily during a synchronized propaganda performance. In the video documentation the performers are using hand held cards to illustrate a pistol—in keeping with the militaristic state of North Korea—and for a brief moment a young boy peaks his head out from behind the card. Ham encountered this by chance on TV and recognized it as a powerful symbol of the faceless bureaucracy. Recreating this moment was for Ham an opportunity to give voice again to that nameless child.

Kyungah Ham works across installation, video, performance and traditional media. The legacy of war is a recurring motif in Kyungah Ham’s art, in particular the division of the Korean peninsula and related government propaganda. Ham’s paintings and sculptures often conceal political messages, which may initially be eclipsed by the colorful and luscious style in which they are rendered. Ham enacts a dialogue that extends across the barriers of ideology and physical distance that mark South Korean relations with its northern neighbor. Ham’s works reflect both historical and contemporary episodes of conflict, and construct a strange and compelling mixture of propaganda, social activism, and personal memory.