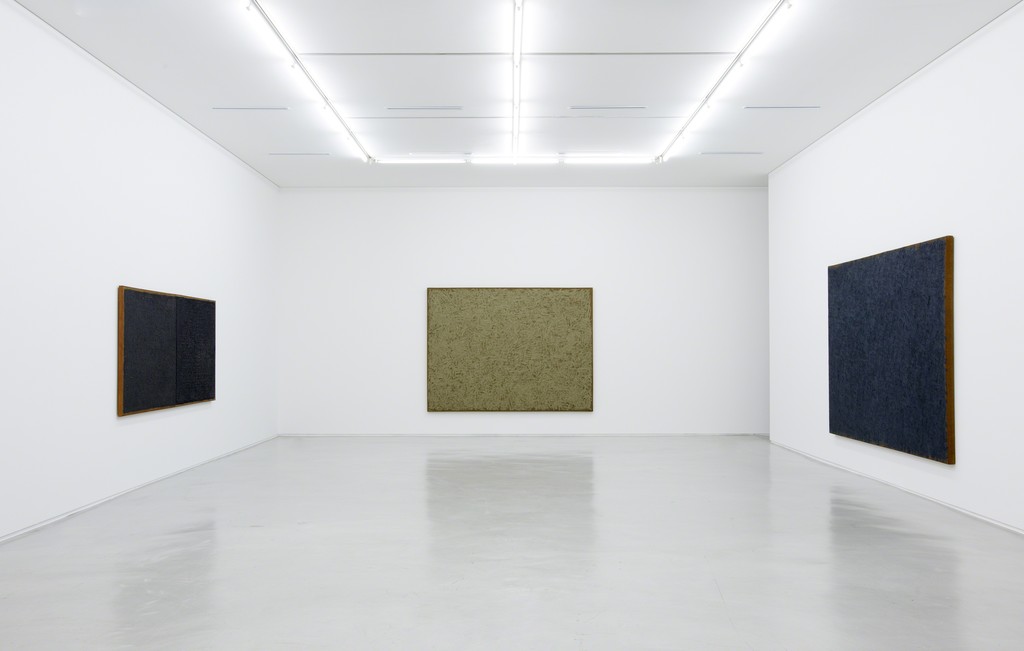 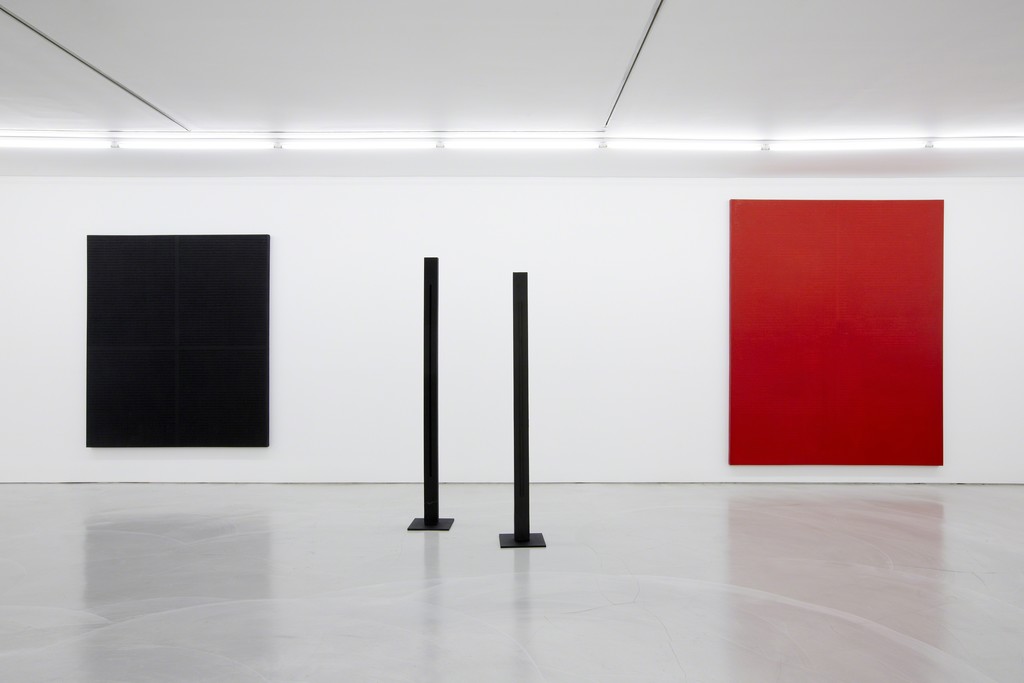 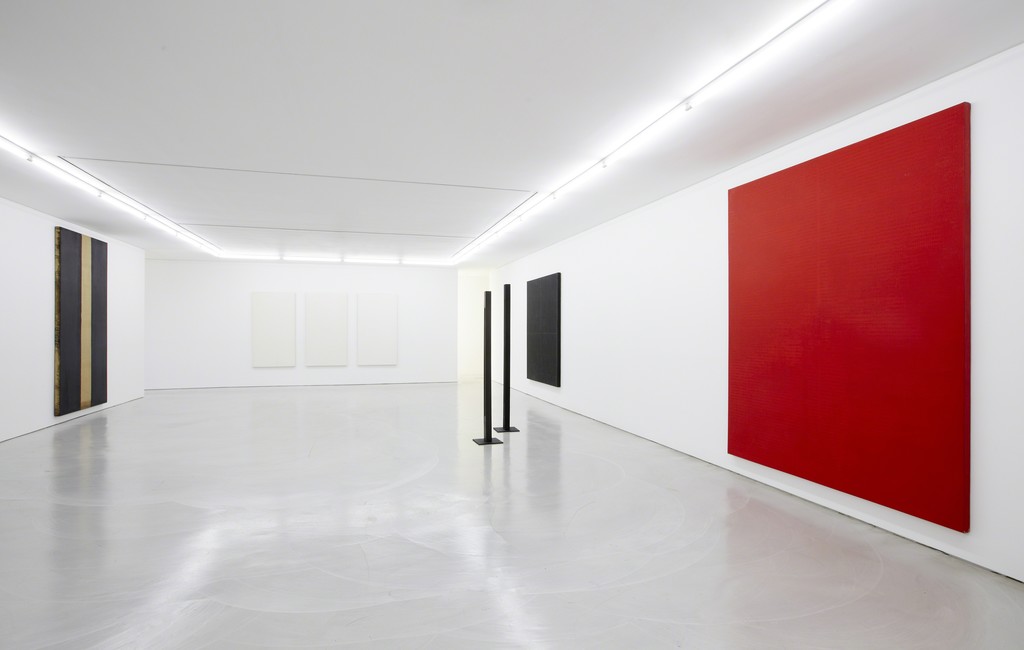 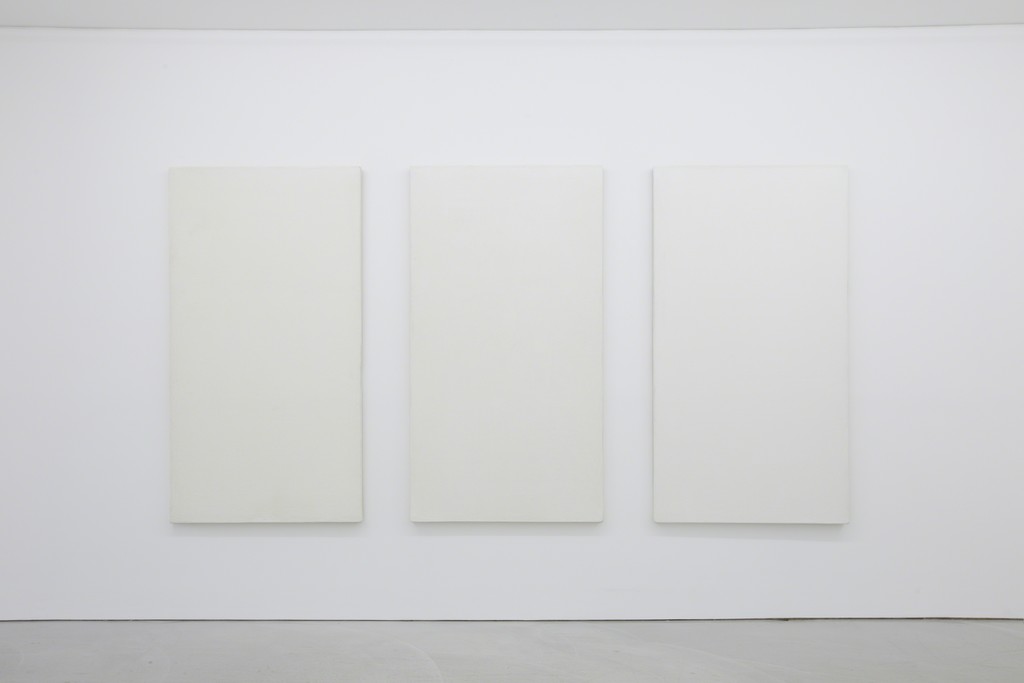 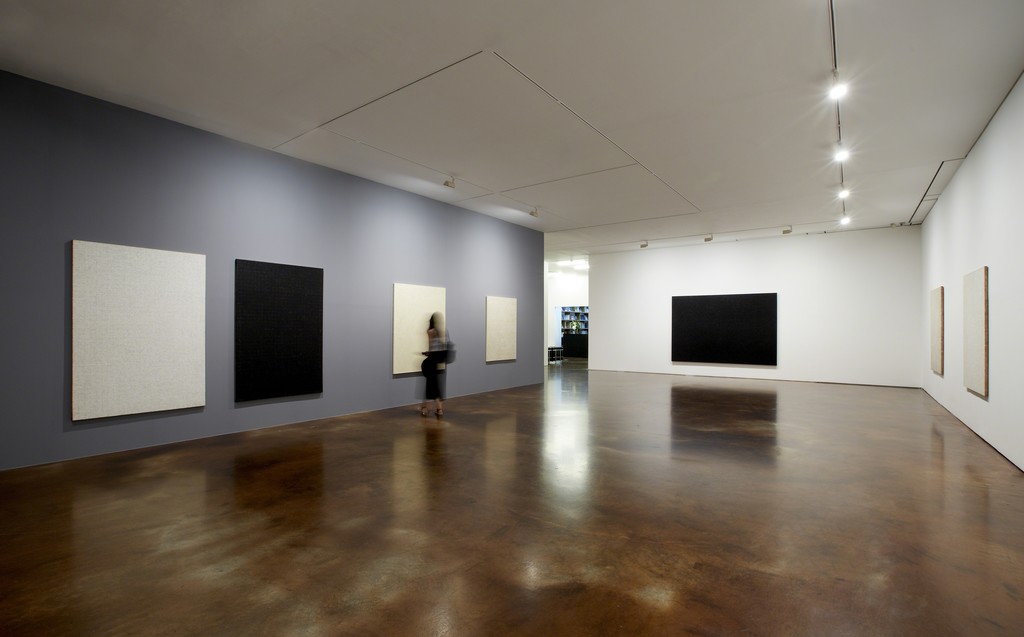 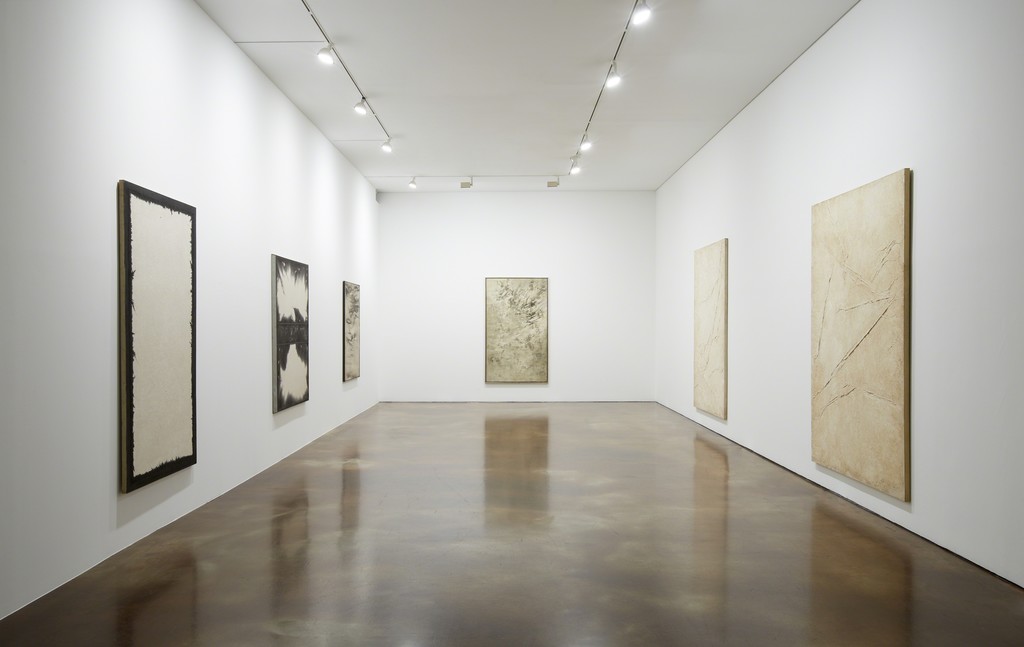 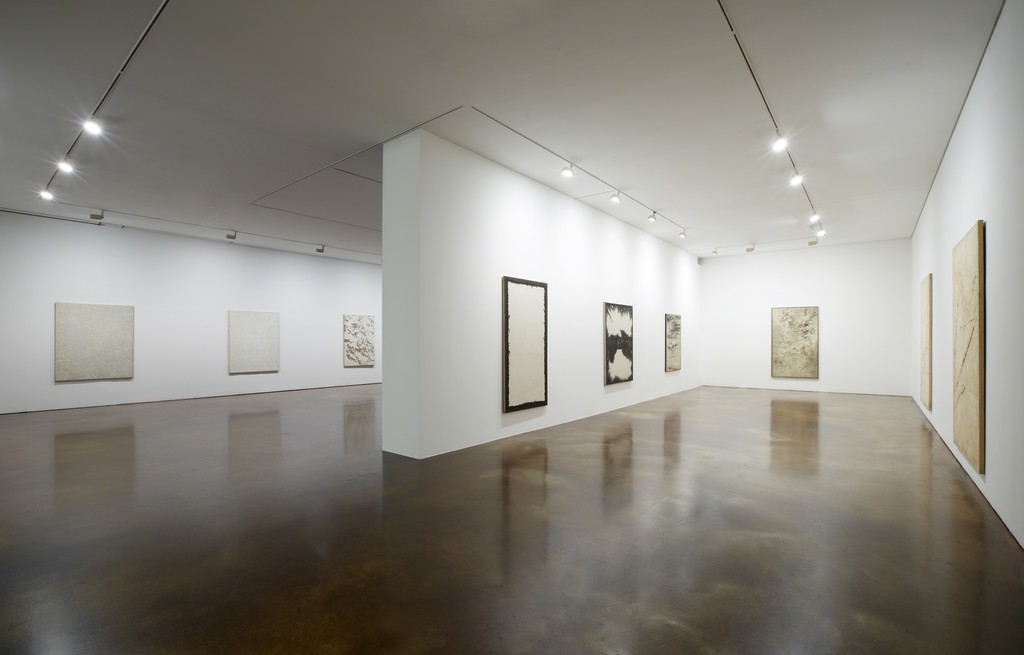 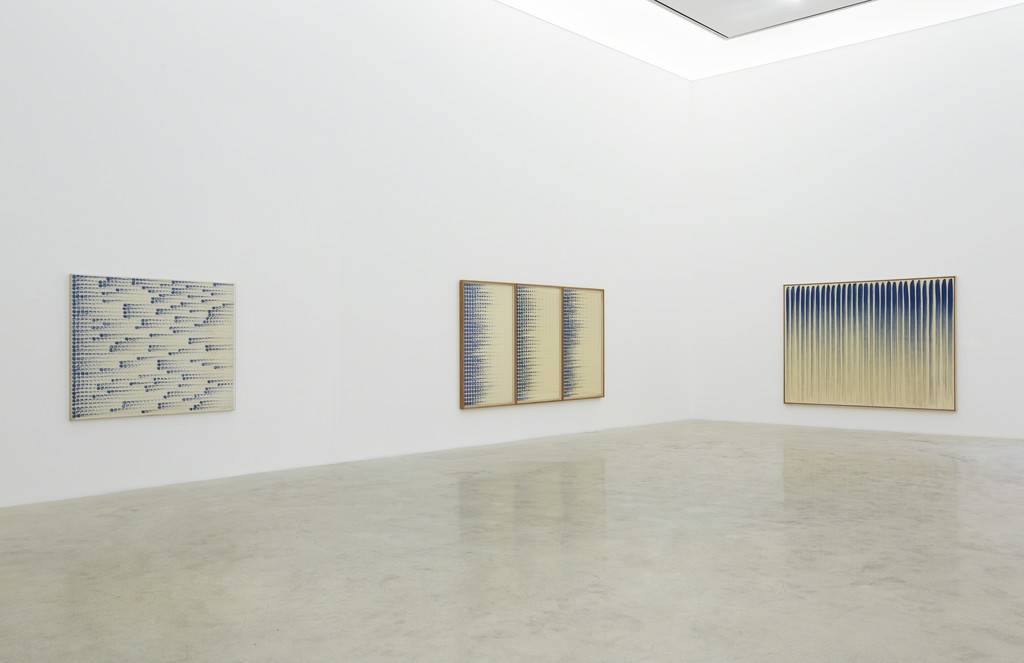 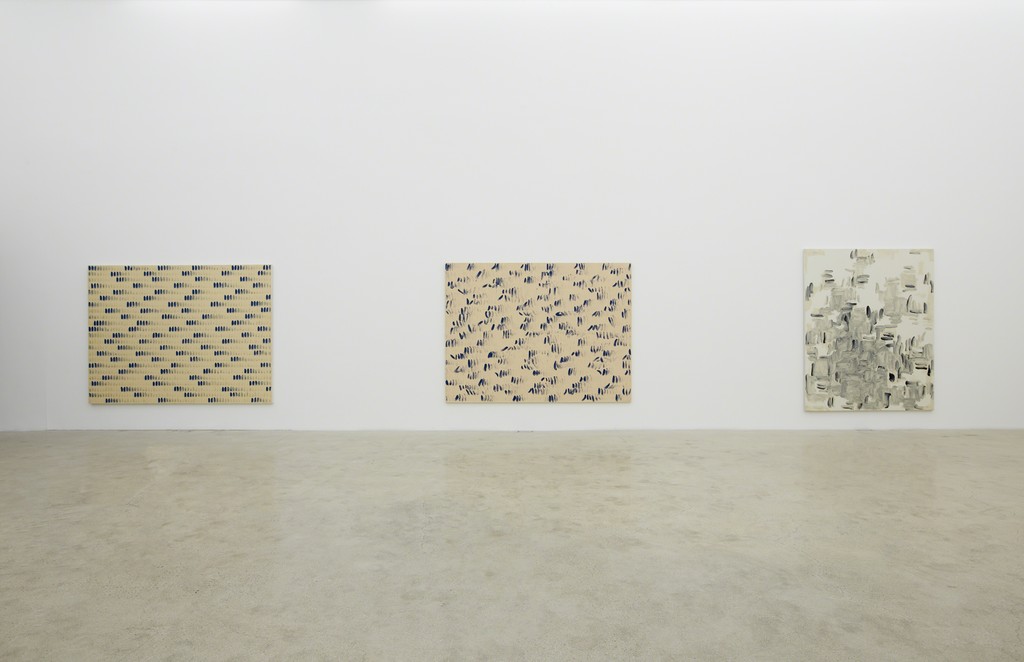 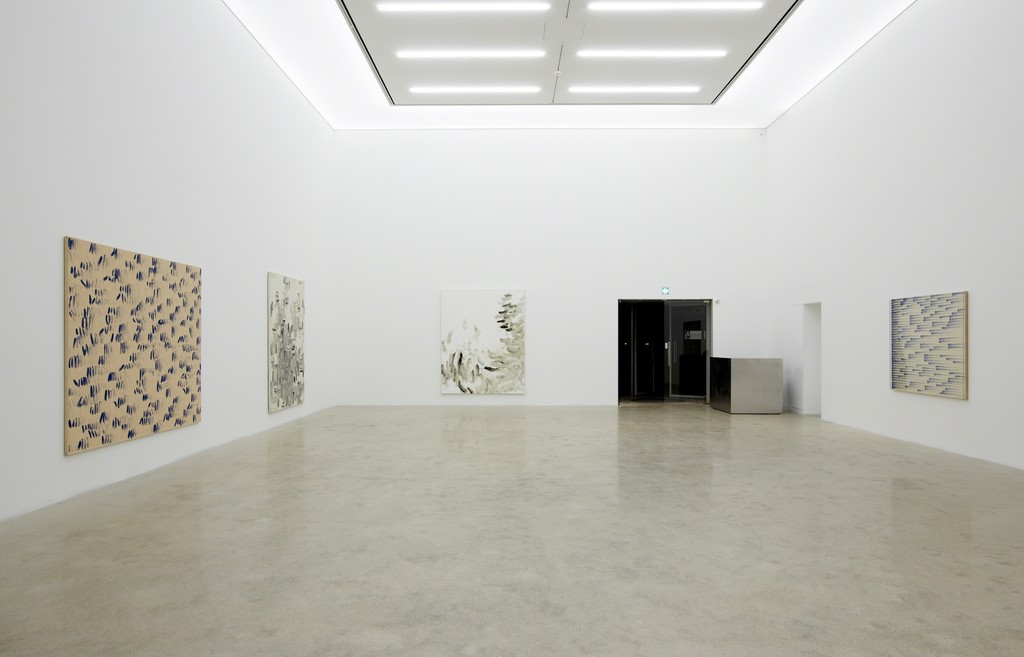 Kukje Gallery is pleased to present The Art of Dansaekhwa, an exhibition showcasing masterworks from the celebrated art historical movement. Curated by professor Yoon Jin-Sup the exhibition presents the works of Kim Guiline, Park Seo-Bo, Yun Hyong-Keun, Lee Ufan, Chung Chang-Sup, Chung Sang-Hwa, and Ha Chong-Hyun, the seven artists who spearheaded the development and dissemination of Dansaekhwa in the 1970s. By showcasing these artists together Yoon re-contextualizes the origins of Dansaekwha through the lens of Korean modernism. And by highlighting early works the exhibition conveys the vibrancy and immediacy of the original Dansaekwa artists. The Art of Dansaekwha especially captures the importance of traditional Korean philosophy, the innovative use of materials, and the performative aspect of studio practice, all of which were key components of the movement. The exhibition illustrates these ideas amongst the overlapping and complimentary elements of the artist’s works, capturing their disciplined approach and aesthetic vocabularies.

Korean Dansaekhwa, also referred to as baeksaekpa (the School of White) emerged in the 1970s as a reaction against the academicism of the National Art Exhibition and in response to the rapidly changing social and political landscape within the country. Characterized by its emphasis on monochromatic compositions and refined approach to materiality, Dansaekwha was immediately associated with questions of Korean cultural identity and the burgeoning modern art movement. What defined the Dansaekwha movement was a deep philosophical commitment to the power and indigenous vitality of traditional materials as well as the relationship between the artist’s consciousness and the act of making. This focus on studio process has led many scholars and artists to characterize Dansaekhwa as a type of “performance” based on its highly specific, intentional processes used in the making of artworks. In this definition the preparation and action implied in making a painting achieves a level of mindfulness akin to that seen in meditation. This emphasis on developing specific techniques (described in more detail in the artist bios), and using traditional materials in order to synthesize their aesthetic vocabulary and philosophical intent linked all of the artists, defining the movement.

Using painting techniques from both the west and the east, Dansaekwha artists regularly employed raw burlap and hanji paper in totally new and innovative ways using western idioms while simultaneously modifying them to engage with traditional aesthetics. This willingness to adopt ideas from western modernity allowed for the movement to engage in a global dialogue while fostering radical new hybrid techniques that continue to be associated with Dansaekwha. This approach was not without controversy, however, as the artists who championed the philosophy and formal strategies of Dansaekwha were often out-spoken critics of the western influence in Korea and the rapid pace of modernization. Indeed, it was this tension filtered through the highly refined artwork that characterizes Dansaekwha and makes it such a profoundly important art movement.

Kukje Gallery’s The Art of Dansaekhwa provides a rare opportunity to reinvestigate the historical evolution of modern art practice in Korea. Having developed at a time of rapid change in Korea’s political and socio-economic landscape, Dansaekwha reflects the social milieu in which these artists lived and worked. The exhibition not only conveys how the Dansaekhwa movement flourished within the then-contemporary art scene, but more importantly it establishes the significance and value of Korean Dansaekhwa within a broader international context. Installed in all three of Kukje Gallery’s building’s K1, K2, and K3, The Art of Dansaekwha is a rare opportunity to reevaluate one of Korea’s most important contributions to art history.

A full catalog featuring essays by the curator Yoon Jin-Sup as well as Alexandra Munroe,
and Sam Bardaouil / Till Fellrath will be available at the gallery.

Yoon Jin Sup is a curator and writer. He holds a BA in Western painting and an MA in Aesthetics from Hongik University and a doctorate in Philosophy from the University of Western Sydney in Australia. He curated the 1st Gwangju Biennale Special Exhibition in 1995. Coinciding with the 3rd Gwangju Biennale (2000), he curated the Biennale’s special exhibition—The Facets of Korean and Japanese Contemporary Art, the first exhibition that brought Dansaekhwa and Mono-ha together in one place. A past president of the Korean Art Critics Association his most recent curatorial work includes Dansaekhwa: Korean Monochrome Painting, which he guest-curated for the National Museum of Contemporary Art, Korea (2012).

Kim Guiline’s paintings explore the power and subtlety of transparency using thin layers of paint over sculpted mulberry paper. Applied to the canvas when wet and carved into furrow-like patterns, the paper embodies the spirit and cultural heritage of Korean culture. The Visible, Invisible series of the 1970s and then the Inside, Outside series of the 1980s reveal the material properties of paint and mulberry paper and the artist has described their surface as being like a skin that captures the act of making.

Park Seo-Bo’s exquisite works reflect five decades of exploring the role of artist as a channel through which energy manifests itself in form. One of the most influential artists in modern Korean history Park uses traditional Korean paper and employs simple but dramatic gestures that allude to a simplified language. Framing many of the fundamental concepts of Dansaekwha, Park has pursued his philosophy of the artist as a conduit. This profound belief in the artist’s ability to merge with the medium reflects Park’s practice of illustrating the patterns of energy that make up consciousness, evoking what he refers to as body rhythm.

Park Seo-Bo was widely celebrated as an influential professor at Hongik University, Seoul where he was later the Dean of the College of Fine Arts. Park has exhibited in multiple solo shows in significant institutions such as Daegue Museum of art, Daegue, Korea (2012), Busan Museum of Art, Busan, Korea (2010), Musée d’Art Moderne de Saint-Étienne Métropole (2006-2007), National Museum of Contemporary Art, Gwacheon, Korea (1991). His work was included in Beginning of New Era, National Museum of Contemporary Art, Korea (2009), Working with Nature: Traditional Thought in Contemporary Art from Korea at Tate Gallery Liverpool in 1992.

Yun Hyong Keun worked primarily with a mixture of two oil pigments, burnt umber and light aquamarine, to create his nuanced paintings. Characterized by a surprising depth and range given this limited palette, the artist was inspired by the organic tones he found in nature such as rotting leaves. One of the few Dansaekwha artists to adopt a Western approach of ready-stretched canvas and oil paint rather than hanji, Yun worked on the floor, viewing the act of painting as a simple, quotidian activity.

Lee Ufan is an artist and philosopher. He has written the seminal text defining Mono-ha in addition to writing many other critical texts. Having moved to Japan in 1956, he traveled extensively between the two countries becoming a vital conduit between what was happening in both places and playing a pivotal role in introducing Dansaekwha to a more international audience. His series From Line and From Point, begun in the early 1970s, connected him to Dansaekwha. In these well known works Lee explored themes of gesture and the connection between mark making and the medium of paint itself. This interest was grounded in the tradition of calligraphy, which involved a discipline of repeatedly drawing single lines, and frames the artist’s profound investigation of the act of painting.

Lee Ufan was a professor at Tama Art University, Tokyo from 1973 through 2007. Lee’s work has been exhibited in many solo and group shows in major museums internationally including The Royal Museum of Fine Arts of Belgium, Yokohama Museum of Art, Palazzo Grassi, and Museum of Modern Art, New York. In 2011 his retrospective Lee Ufan: Marking Infinity was organized by the Solomon R. Guggenheim Museum, and in 2014 he was invited for a major sculpture exhibition in Chateau de Versailles.

Chung Sang Hwa Repetition and process are central themes in the art of Chung Sang-Hwa whose beautiful works elicit powerful feelings of calm. Chung’s work is a result of a laborious technique that allows for a profound unity between the artist and the artwork. His process is as follows: the artist composes a base layer with zinc primer on canvas, he then folds the dry canvas at regular intervals and removes the fragments of paint from the cracked lines, subsequently filling those voids with acrylic paint. Chung’s sensitive application of paint filling the fine cracks imbues them with emotional depth and the hairline fissures resemble skin, evoking our body’s ability to heal and renew itself.

Chung Sang-Hwa is well known not only in Korea but also in France and Japan. His recent group exhibitions include Qi is Full, The Opening Exhibition of Daegu Art Museum, Korea (2011), A Look at Contemporary Art, Artsonje Museum, Gyeongju, Korea (2009), and Voyage Sentimental, Mediations Biennale, Poznan, Poland (2008), Korean Monochromism: Methods, Ideas and Spirits, Busan Museum of Art (1998). Chung had a retrospective at Musée d’Art Moderne de Saint-Étienne Métropole in 2011.

Chung Chang Sup The unique works of Chung Chang-Sup have been called “unpainted paintings” in which he molds traditional Korean Tak paper after soaking it in water. Pigments are not added to the papers and the muted tones that manifest in the works are based on the length of time the paper is soaked in water before being applied with handmade glue to the canvas support. Chung’s work reflects his Taoist belief that the creative artist balances material and nature in a unified act of making. Long considered synonymous with Korean culture, Tak paper is made out of mulberry bark and embodies the simplicity and rugged beauty prized by tradition.

Ha Chong Hyun works with plain, woven hemp into which he pushes thick paint from the obverse side of the canvas. Ha’s interest in the simple muted tones of hemp stem from his work in the 1970s when he bravely explored non-traditional materials including plaster, newspaper, barbed wire, and the burlap that was used to transport food aid from the U.S. following the Korean War. Ha used oil paint thereby synthesizing the traditions from both the East and the West. His technique of pushing paint through the canvas from behind remains a powerful gesture, all the more because of the formal beauty and subtle gesture captured using this approach.

Ha Chong-Hyun has lived and worked in Seoul since graduating from Hongik University, in 1959. Awarded an honorary doctorate degree, he served as the Dean of the Fine Arts College from 1990-1994. From 2001–2006 Ha was the Director of the Seoul Museum of Art. Ha has exhibited both nationally and internationally at venues such as Gyeongnam Art Museum, Changwon, Korea (2004); and Mudima Foundation of Contemporary Art, Milan, Italy (2003). He was the subject of a major retrospective exhibition at the National Museum of Contemporary Art, Gwacheon, Korea in 2012.