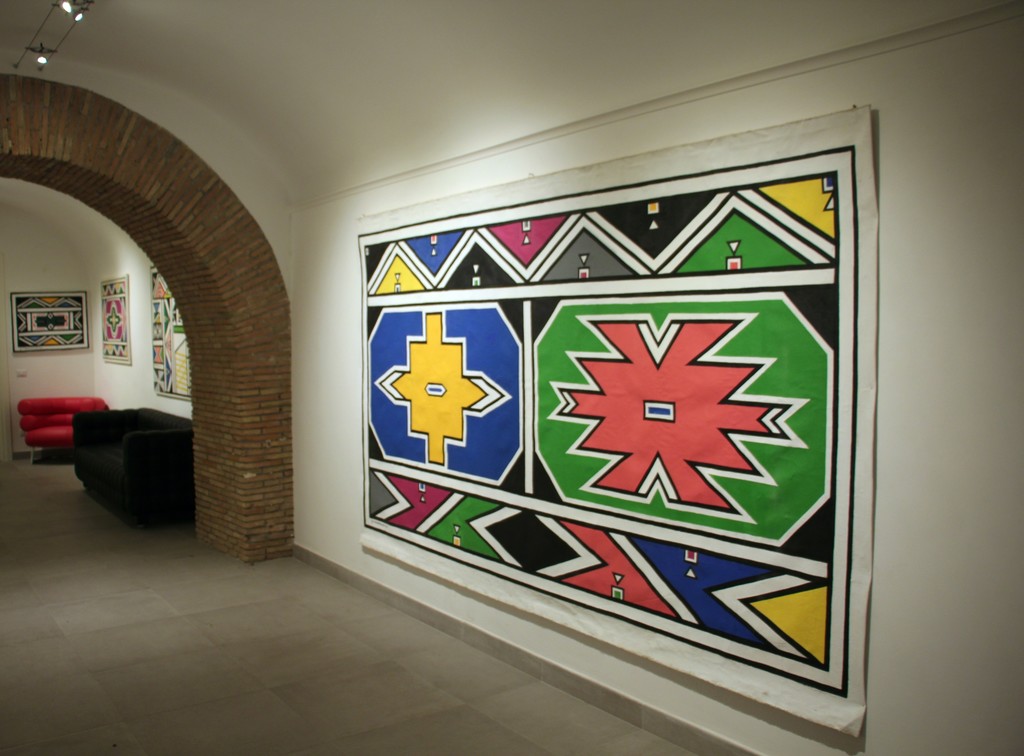 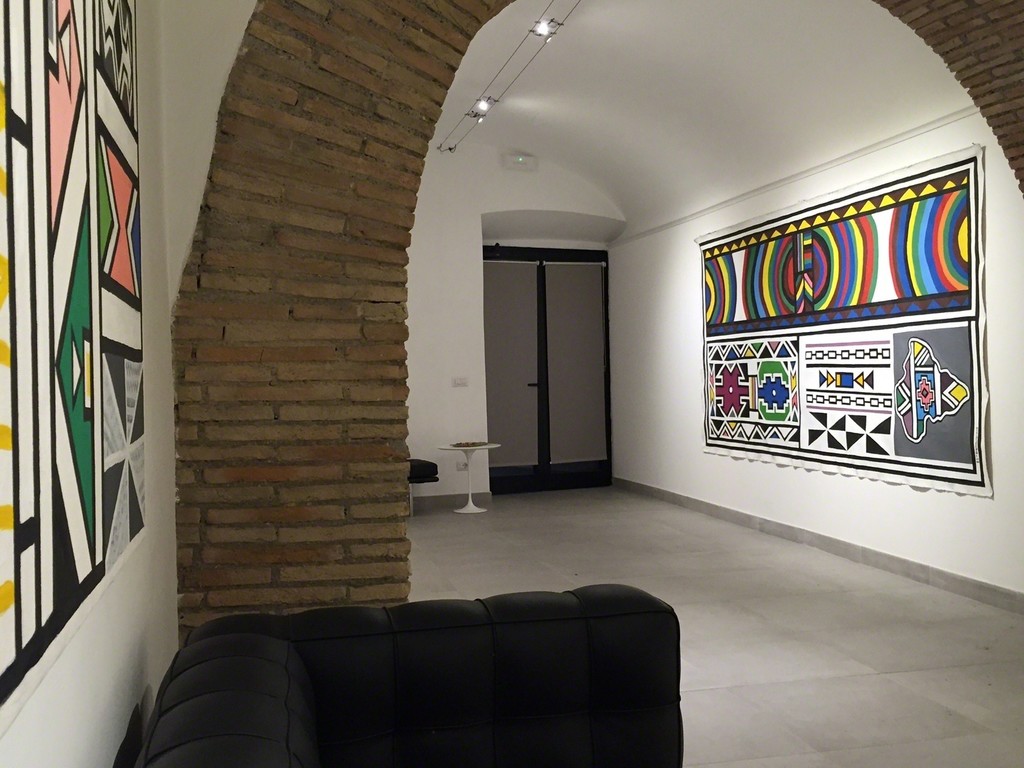 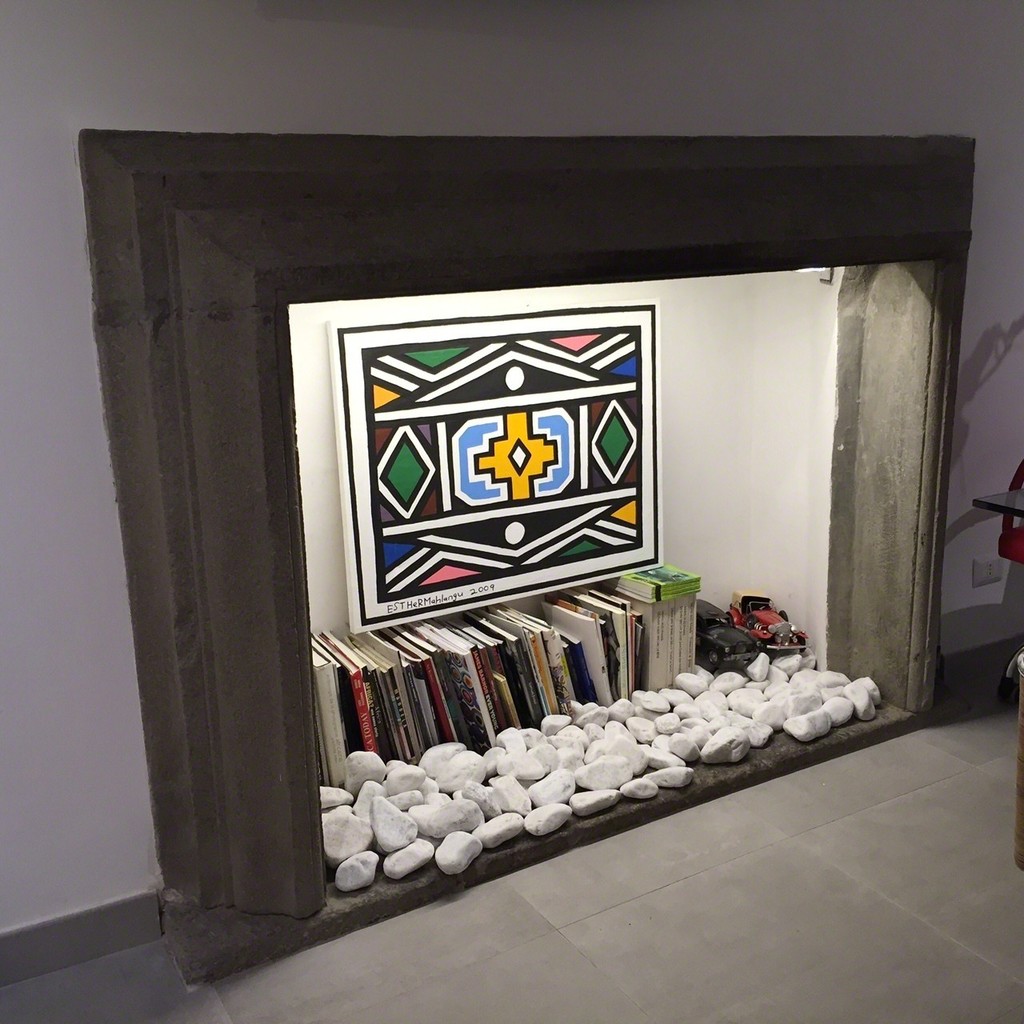 The Kyo Noir Studio continues the series of exhibitions entitled "Ex Africa semper aliquid novi" a quote from Pliny the Elder, which translated from Latin means "Always something new from Africa", will be the starting point of spreading the culture, to general public, art and contemporary African artists, already protagonists in recent years on the international art scene.

The second series will focus on Esther Mahlangu well known international artist, who has participated in major exhibitions from “Magiciens de la Terre” the art exhibition Africa Remix and is present in the most important institutions, museums and private collections in the world. Her works are also appreciated in her own country, South Africa, where she is very popular. Starting from Mabhoko, the village where she lives, she has traveled the world to raise awareness of the Ndebele tradition of painting.

According to local tradition, Esther began to paint at a very young age under the guidance of her grandmother and mother, these paintings decorate homes and are renovated at the rite of passage from youth to adulthood of men and in fact the tradition of painting was entrusted exclusively to women . Today Esther Mahlangu, as she said during the interview with Antonella Pisilli, has transferred all her knowledge to both girls and boys of the Ndebele people to form a small army of persons able to decorate in Ndebele style everywhere around the world allowing this art and culture to spread and remain over time.

The classic Ndebele painting is the result of the combination of formal geometric forms, the triangular shape is repeated on a regular basis, the figures are created within a clear black line on a white background, the interior colours are flat and very lively with alternating and very decisive symmetry.

From an ancient African culture we reach a phenomenology of form where the spontaneous element carries with it a host of values, where the abstraction of reality leads us to a symbolic process representative of a culture. The abstract element takes over the pictorial element, namely the meaning. The geometric abstract art of the Ndebele tribe seems very close to the pure concepts of abstraction so dear to supremacists, the pure sensitiveness of the forms becomes the true essence and universality of art.

Esther Mahlangu has transferred these geometric forms on various infrastructures from canvas, to cars, from aircrafts to design, the aesthetic experience, that the contamination process produces and refers back to the Ndebele tradition, of having contaminated the world and having transferred its cultural tradition is the real artistic process accomplished by the painter.
In 1991 Mahlangu created the first "African Art Car", decorating a BMW 525i with the typical Ndebele geometric design. In 1997 these designs were also placed on the aircraft tails of British Airways, in 2007 the same special painting technique has also been reproduced by the artist on the new Fiat 500 for the exhibition "Why Africa?" in Turin. Last year, she collaborated with a Swedish brand to design a limited edition of sneakers called Eytys.

In August this year she took part in a campaign promoted by the singer, John Legend, recreating the classic Ndebele design on a special edition bottle of Belvedere Vodka and the profits from the sale will be donated to the Global Fund for the fight against HIV / AIDS, malaria and tuberculosis.

After 25 years she worked again with BMW and realized the interior of the BMW 7 Series that will be on display from 5 to 9 October at the Frieze Art Fair, which will be held at the Regent Park in London and the proceeds of the sale will go to charity.

The exhibition in Viterbo will be accompanied by an new unpublished video of an interview with the Artist by Antonella Pisilli.