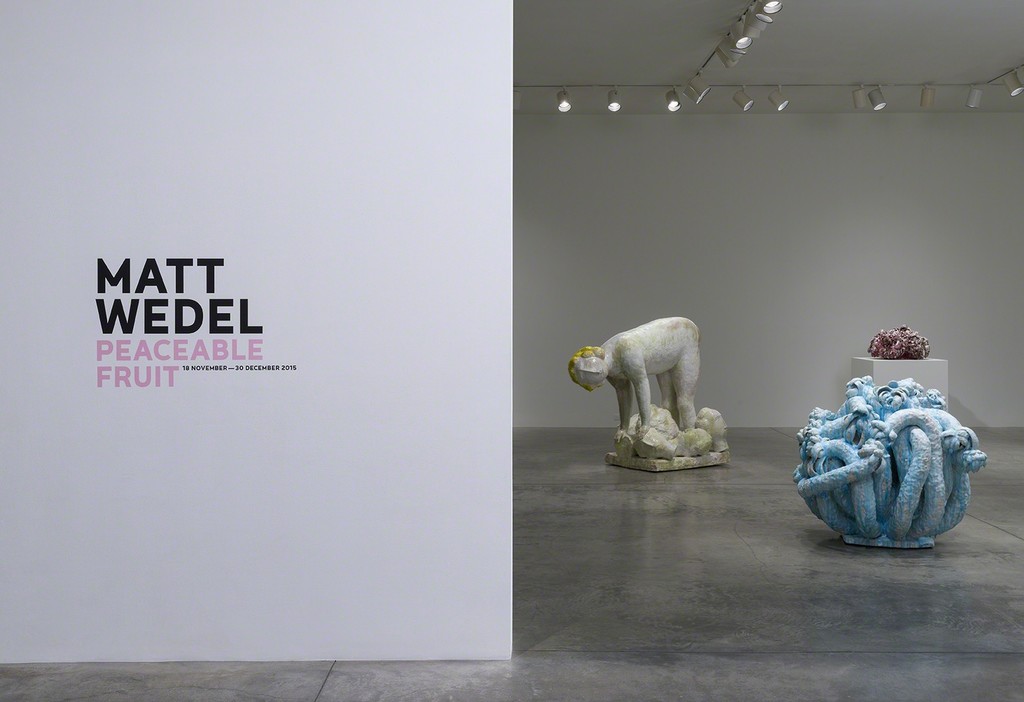 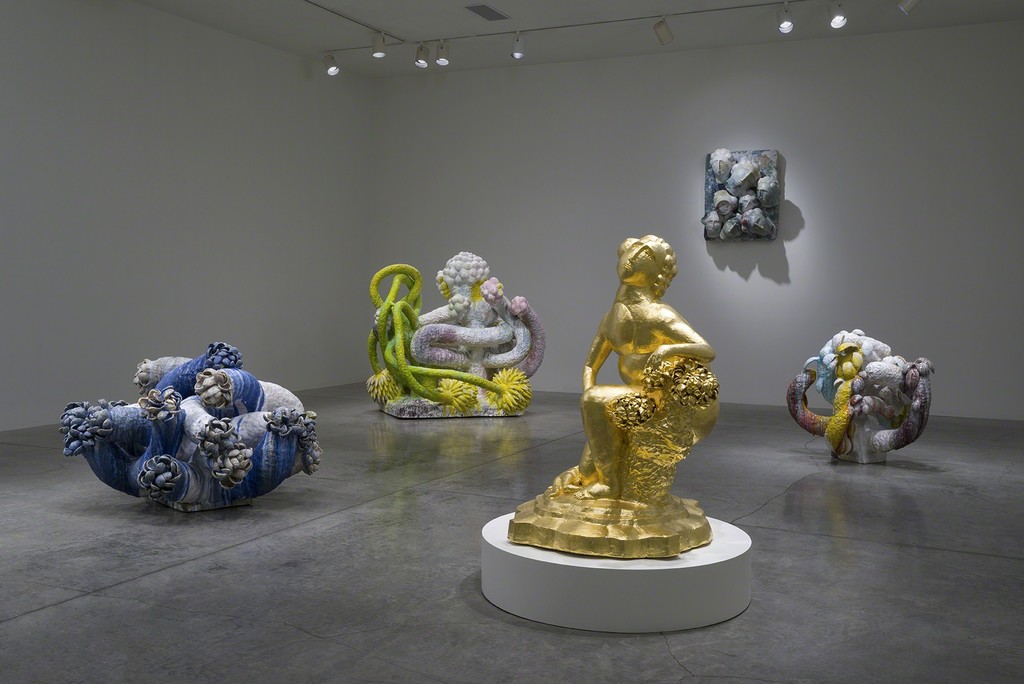 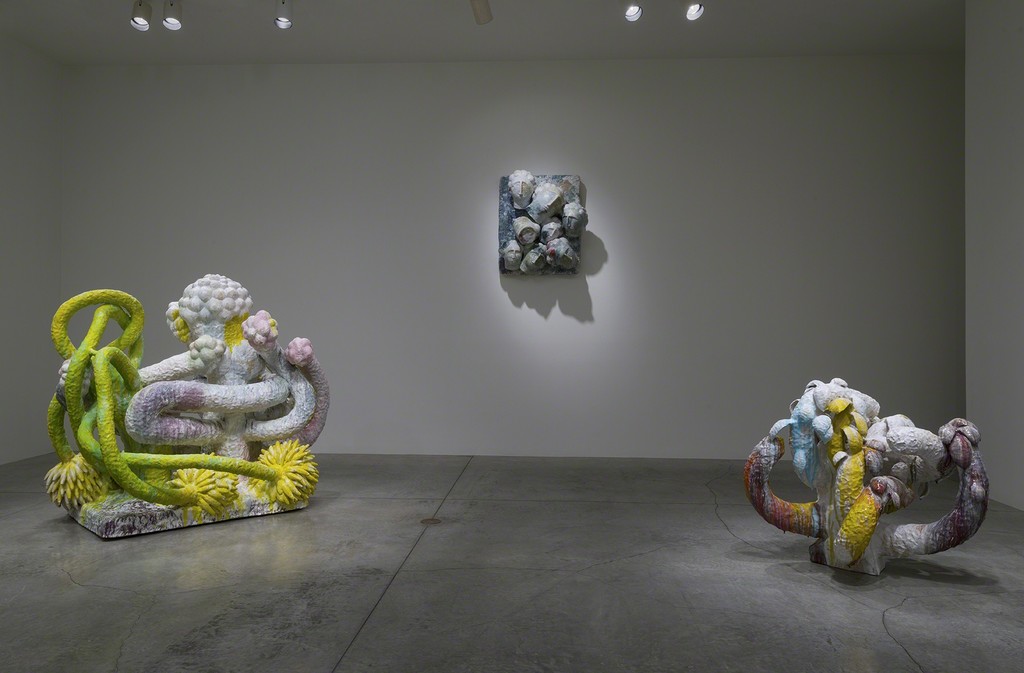 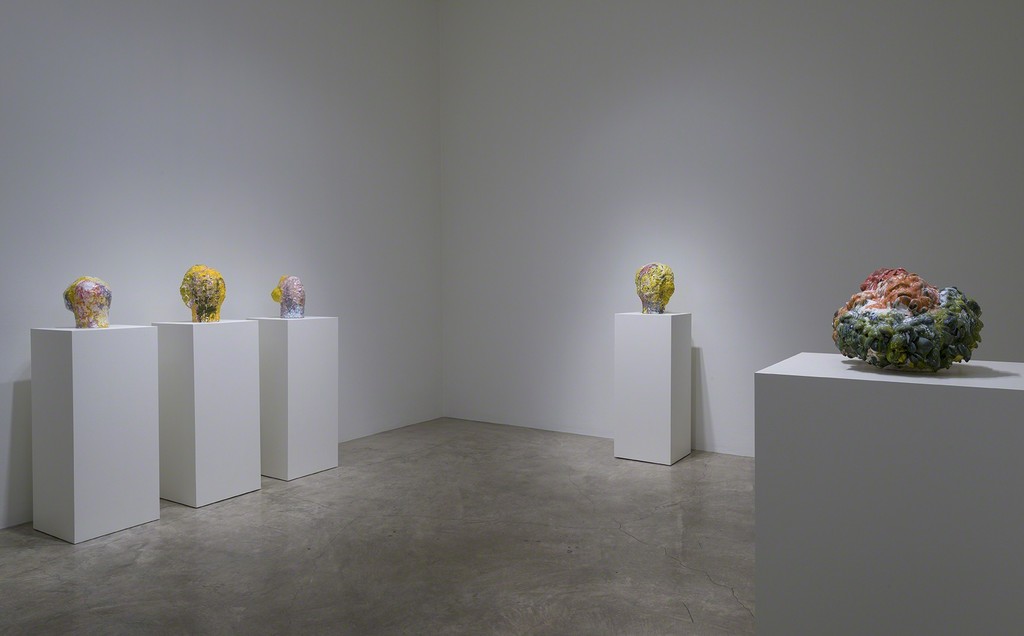 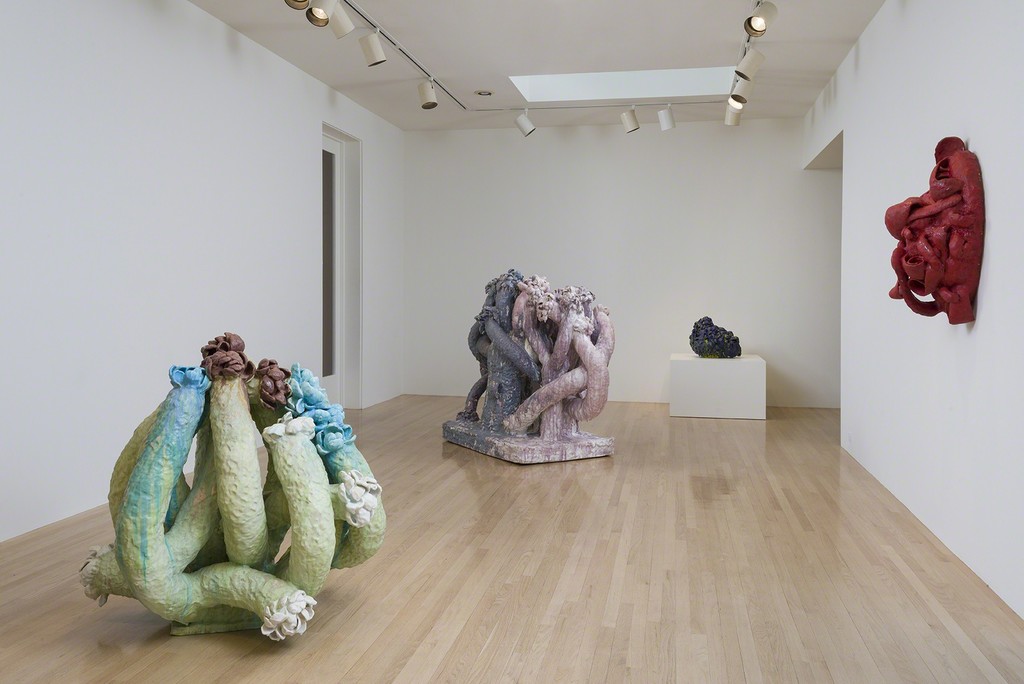 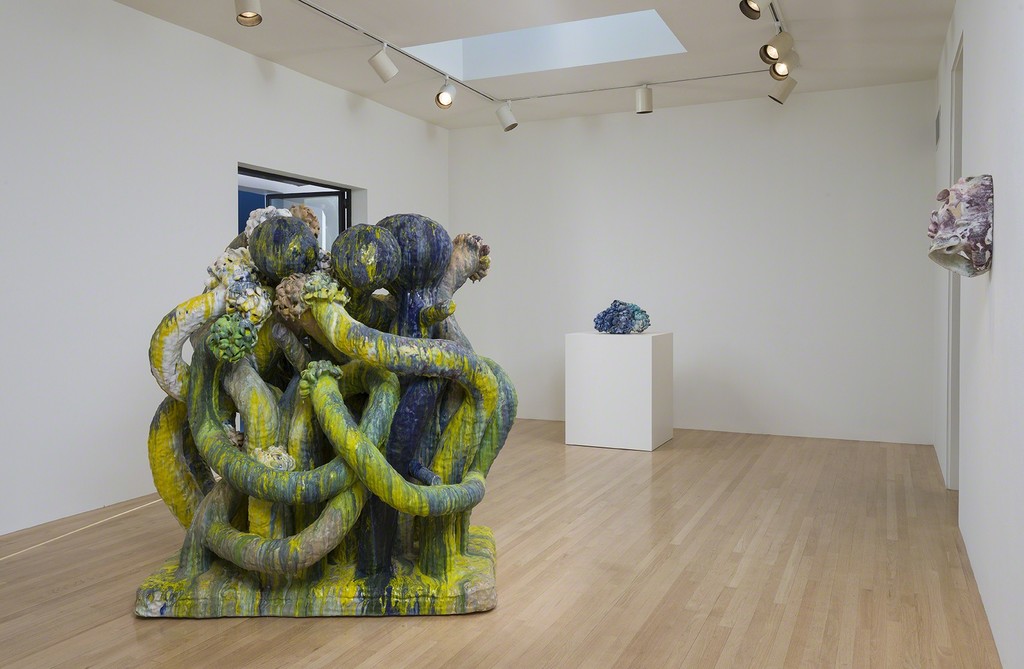 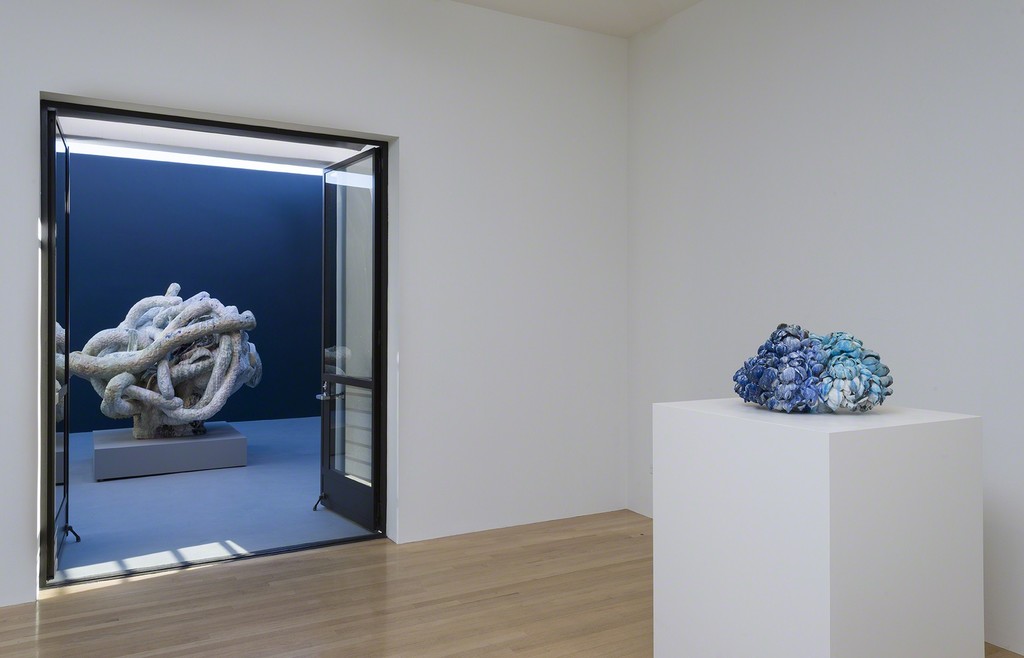 Venice, CA – L.A. Louver is pleased to announce a solo exhibition of new work by Matt Wedel, presented throughout the first and second floor galleries, and open air Skyroom. The exhibition features over two dozen free-standing and wall-mounted ceramic sculptures, awash in color and ranging in scale from 17 inches (5.2 cm) to nearly 7 feet (5 m) tall. This is the artist’s second solo show at L.A. Louver.
“The title Peaceable Fruit comes out of a larger interest in landscape within my work and is a kind of hopeful signifier and idealized blueprint in understanding the future of humanity.” – Matt Wedel
The massive Banana tree, 2015, welcomes the visitor to the exhibition. Measuring 72 x 79 x 59 in. (182.9 x 200.7 x 147.3 cm), the sculpture features wildly interweaving cylindrical stems that yield bunches of stylized bananas. Wedel first imagined the form with two figures akin to Adam and Eve standing at its center. As Wedel grew the sculpture, the figures effectively became engulfed by the banana tree, and then disappeared. The resulting form is an exuberant representation of an idyllic, mythological and abundant landscape that embodies the exhibition title, a direct reference to the bucolic scenes in naturalist painter Edward Hick’s The Peaceable Kingdom (1845-46).
Many of the works on view demonstrate Wedel’s shift towards abstraction, particularly in the flower tree forms, a recurring motif for the artist. Flowers are depicted with irregular petals that bloom from the tops of tubular forms, or in dense low-lying arrangements; while a series of wall mounted works deconstruct the floral form into ribbon-like petals that wrap and twist onto themselves.
Color is more loosely applied, and is less aligned with form compared to earlier sculptures. The layered application of color is especially notable in a series of free-standing heads, their vague facial attributes obscured by muddled coloration, with hints of eyes, noses and mouths etched directly into the glaze.
In this exhibition, Wedel also returns to figuration and classical themes. In Figure with child, 2015 (53 ½ x 36 x 39 ½ in. [135.9 x 91.4 x 100.3 cm]), the artist portrays a parent lamenting the loss of a child whose body lays lifeless at the base of the work. This emotional content contrasts with the brilliance of the gold leaf that covers the entire surface of the sculpture (a first for the artist).
Matt Wedel was born and raised in Colorado, and first began working with clay at the age of two. Under the guidance of his father, a functional ceramicist, Wedel developed an early passion for making sculpture. He earned a BFA from The School of the Art Institute of Chicago, Illinois, in 2005, and a MFA from California State University, Long Beach in 2007, where he studied with Tony Marsh. Wedel went on to teach at the University, and has since received teaching positions at Nova Scotia College of Art and Design, Halifax, Nova Scotia, Canada; Rhode Island School of Design, Providence, Rhode Island, and University of Colorado, Boulder. In each location, Wedel was lured by the accessibility to large kilns, which allowed him to create the sculptures of his imagination. In early 2012, Wedel moved with his family to rural south east Ohio, where he built his own studio and a massive kiln.
Matt Wedel’s work has received national attention with his inclusion in group exhibitions at Ellis Armory, Pittsburgh, Pennsylvania, 2008; Art Gallery of Nova Scotia, Halifax, Nova Scotia, Canada, 2009; 67th Scripps Annual, Ruth Chandler Williamson Gallery, Claremont, California, 2011; Brevard Art Museum, Melbourne, Florida, 2011; Stone Gravy, curated by David Pagel, Ameringer McEnery Yohe Fine Art, New York, 2012; Descanso Gardens, La Cañada, Flintridge, California and Arizona State University Museum, Tempe, 2013. Earlier this year, he was the subject of a solo exhibition at Erskine, Hall & Coe, London, UK. His work will be presented at Omi International Art Center, Ghent, New York in the coming year, and is currently on view in the public art initiative, Century Sculpture 2015, Century City, California through January 2016.
L.A. Louver first presented Matt Wedel’s work in the group exhibition Rogue Wave ’09, and has represented the artist since 2011.