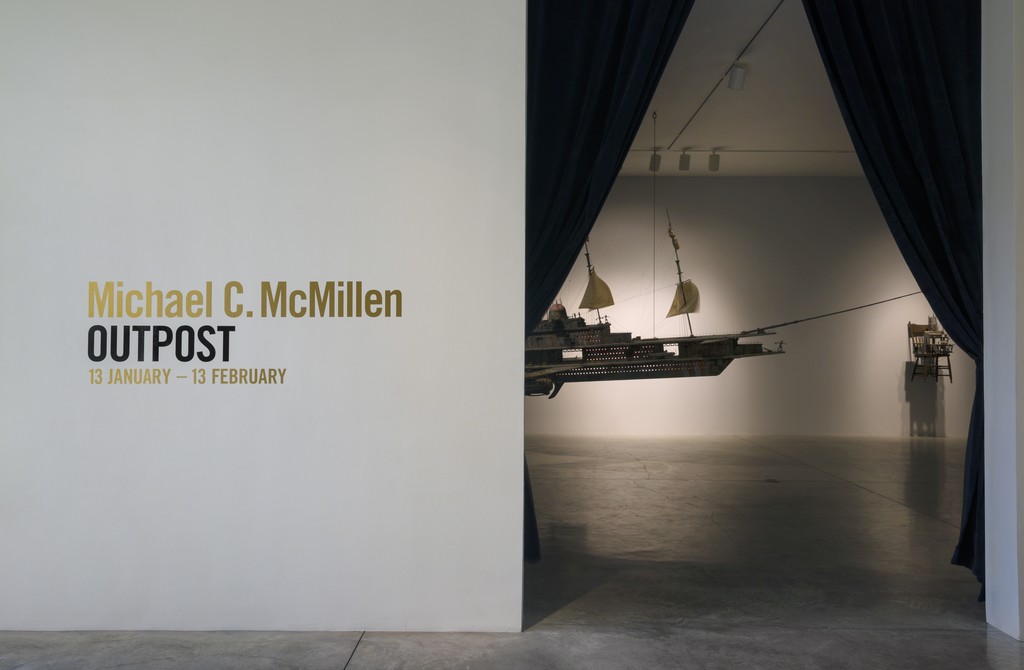 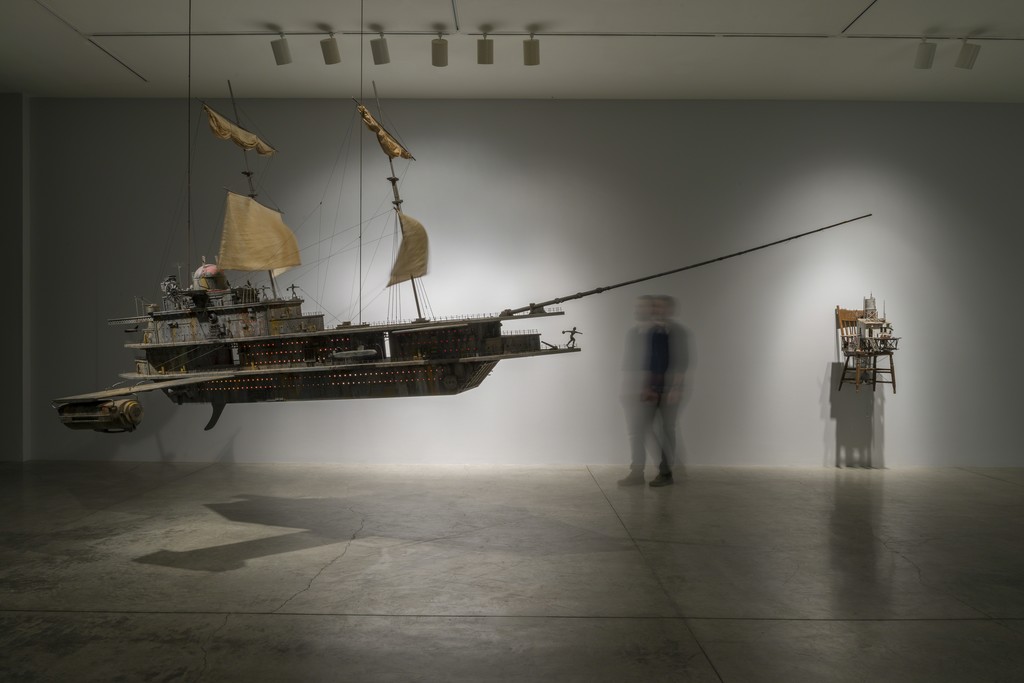 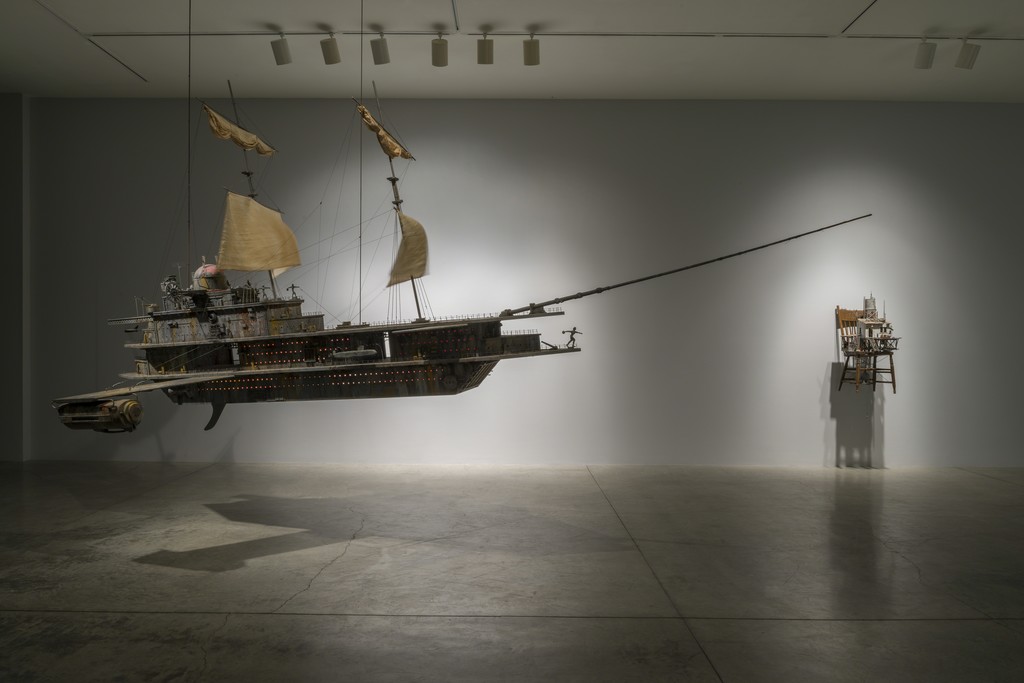 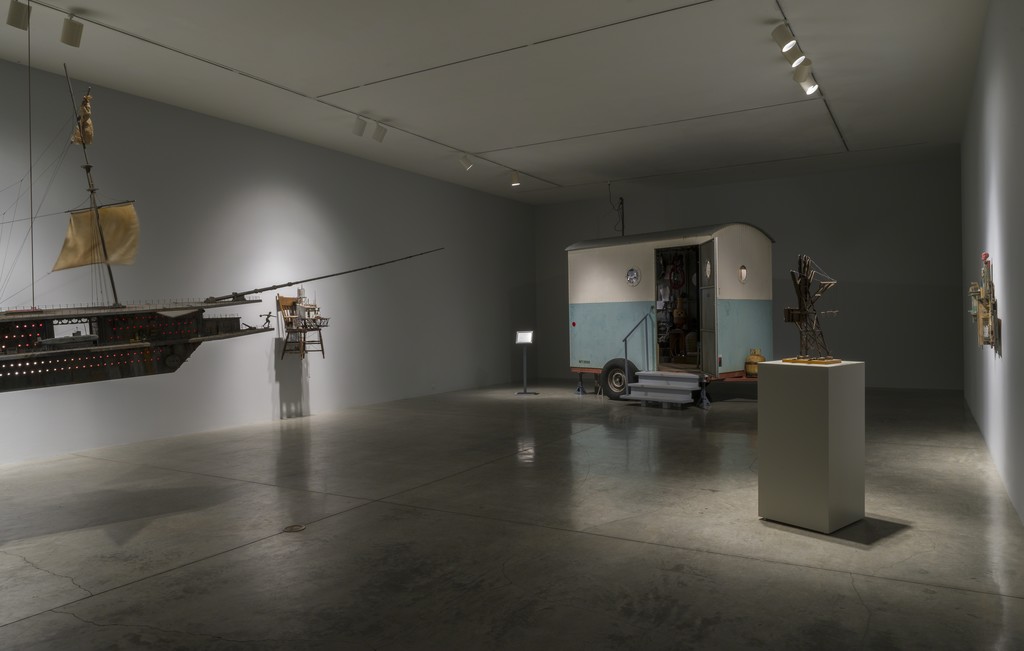 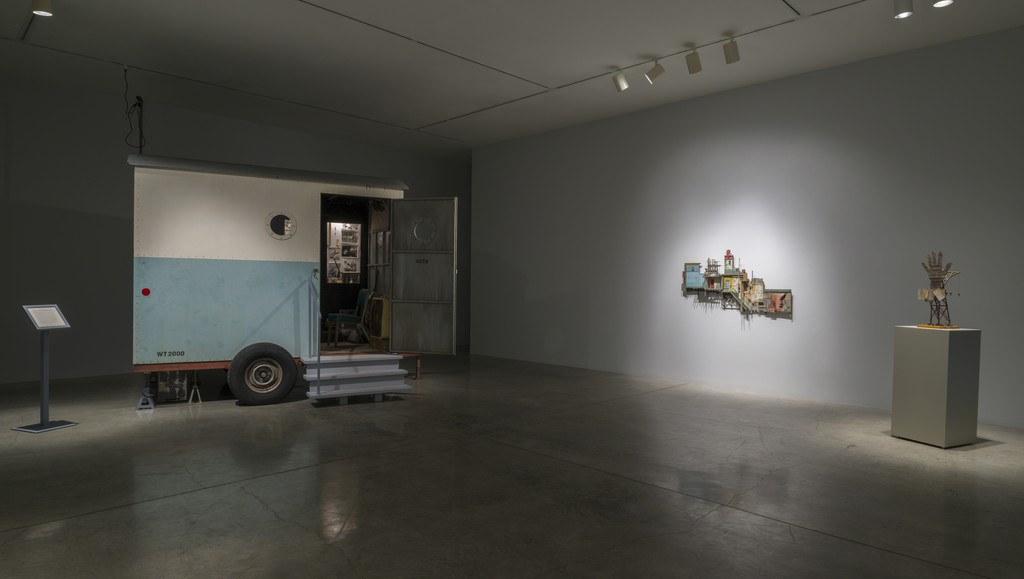 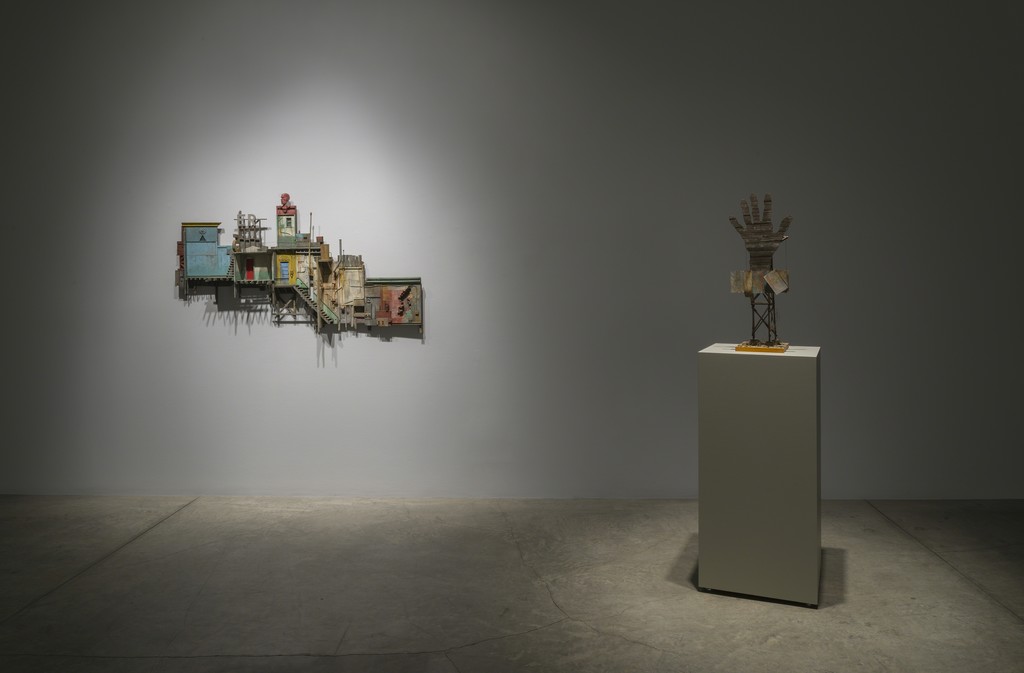 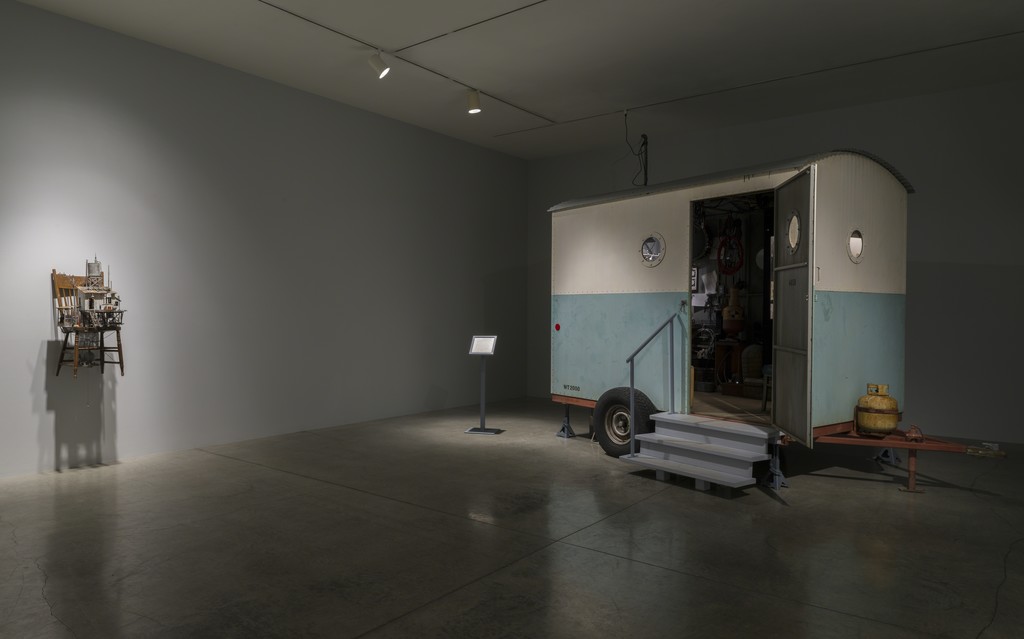 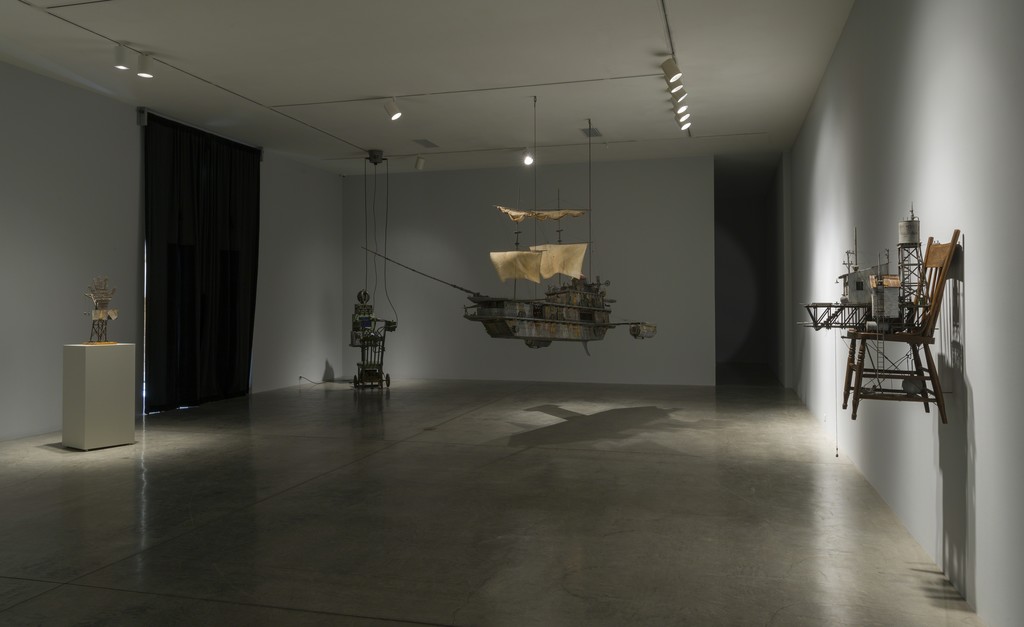 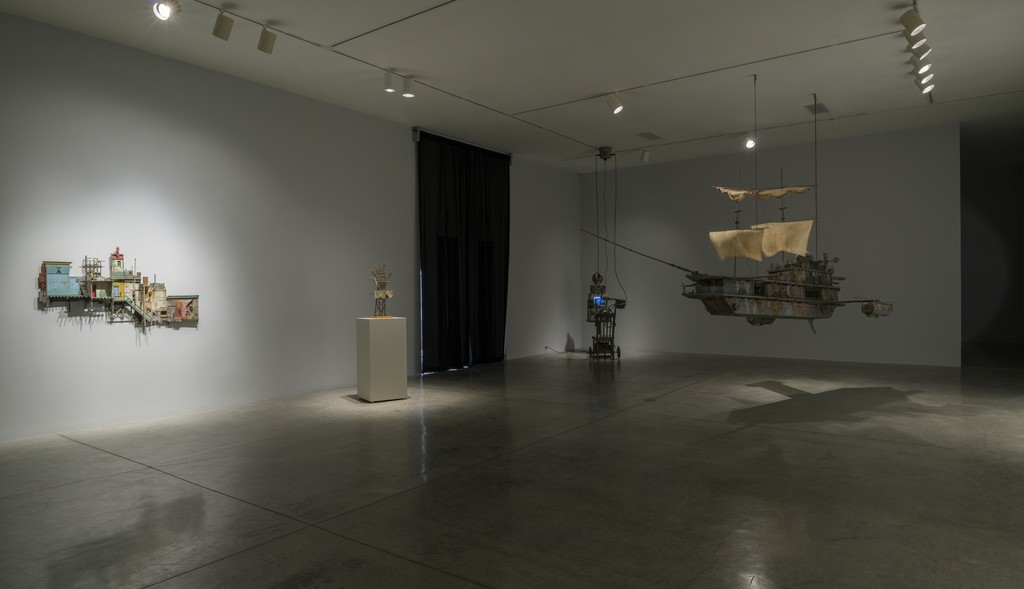 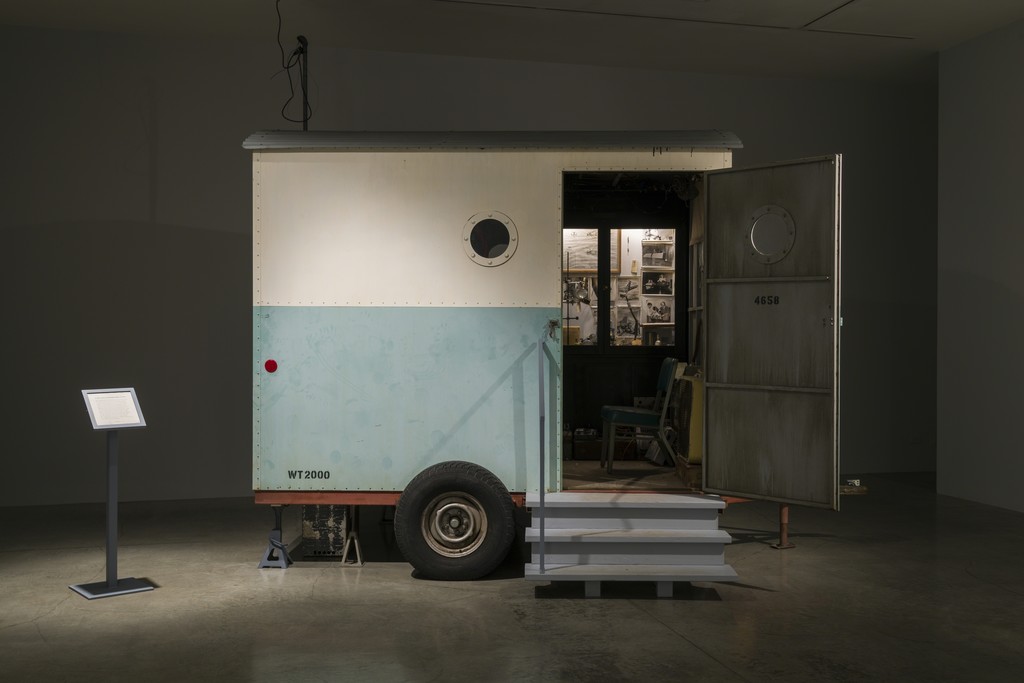 Venice, CA -- L.A. Louver is pleased to present an exhibition spanning nearly four decades of work by Los Angeles-based artist Michael C. McMillen, recipient of a 2015 Guggenheim Artist Fellowship.
One of the earliest works in the exhibition, Pequod II (1987), derives its name from Herman Melville’s literary classic Moby Dick. Pequod II depicts a 17 foot long fantasy ship that while suspended from the ceiling appears to be moving through space. The vessel’s billowing sails intensify the illusion of forward movement. Like most of McMillen’s works, Pequod II is a seamless amalgam of found objects and raw materials fabricated with meticulous attention to detail.
The most recent sculpture on view, the eponymous Outpost (2015), utilizes an antique chair that McMillen has transformed into the architectural foundation of a miniaturized industrial compound that stands desolate and on the brink of collapse. Another recent work Transmitter (2014), which premiered at the Wadsworth Atheneum Museum of Art, Hartford, Connecticut in 2015, features a suspended tower that slowly rotates, to cast animated shadows on an adjacent wall.
Architecture is a common theme of many of the works on view. McMillen says, “Whether marine or terra based, mobile or static, architecture can be seen as a protective perimeter; a vessel to sustain the lives within.” This concept is most visibly conveyed in Dr. Crump’s Mobile Field Lab (aka Inductive Geo-Imaging Field Laboratory (2004-2014). The interactive installation was first created for the California Institute of Technology, Pasadena, during McMillen’s residency on campus in 2004. Visitors may enter the trailer, which appears to be a small mobile laboratory left unattended by an unseen scientist, with experiments still in progress. A fictional character created by McMillen, Dr. Crump is personified through the scientific instruments, quirky objects and relics on display within the hermetic makeshift workspace. A vintage TV monitor within the trailer plays three short films by the artist that expand the viewer’s imagination beyond the limits of the dense interior and beyond the realm of the gallery walls.
Born and raised in Los Angeles, Michael C. McMillen earned both an MA and MFA at UCLA and was an early proponent of installation art. One-person museum exhibitions include the Los Angeles County Museum of Art (1977); Whitney Museum of American Art, New York (1978); Art Gallery of New South Wales, Australia (1980), and the Oakland Museum of California (1990, 2011), which featured the installations The Pavilion of Rain (1989), Train of Thought (1990) and Red Trailer Motel (2003). Most recently, the Wadsworth Atheneum Museum of Art exhibited a solo show of McMillen’s works in 2015, as part of their ongoing series MATRIX. Further, McMillen’s work has been presented in numerous museum group shows including the Solomon R. Guggenheim, New York; The Corcoran Gallery of Art, Washington, D.C.; The Pompoudou; the Walker Art Center, Minneapolis; and Palais de Tokyo, Paris France.
Concurrently on view at L.A. Louver 13 January - 13 February 2016
Rebecca Campbell: You are Here – A new series of painted portraits, all of woman artists