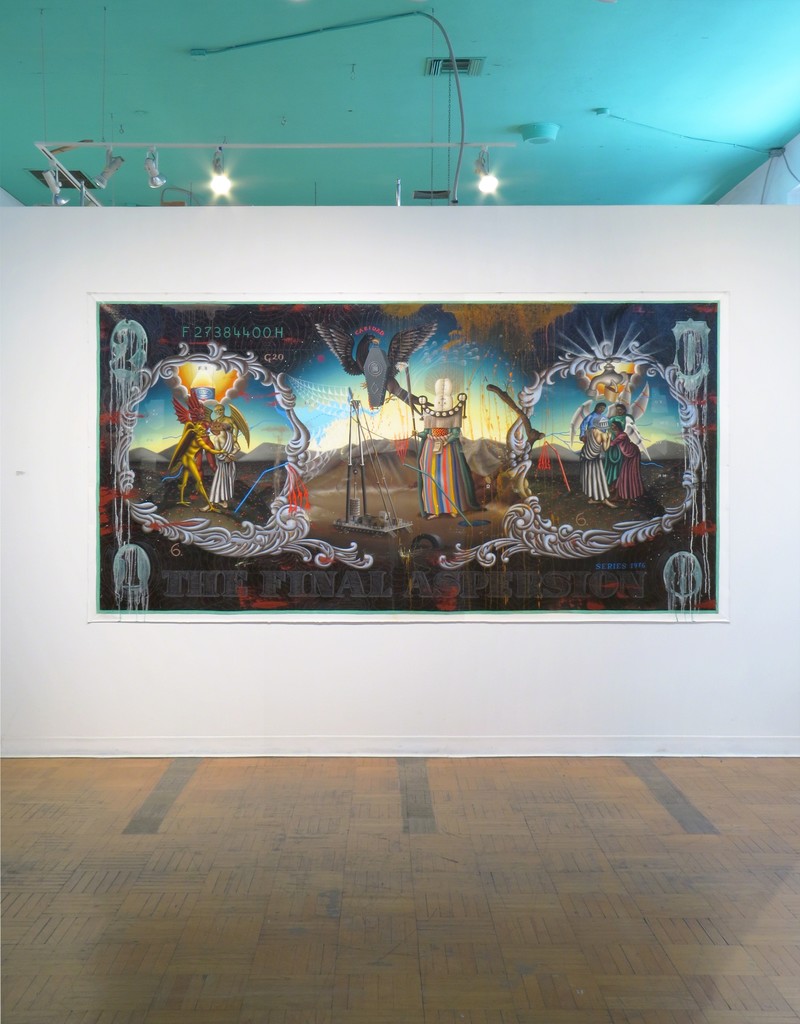 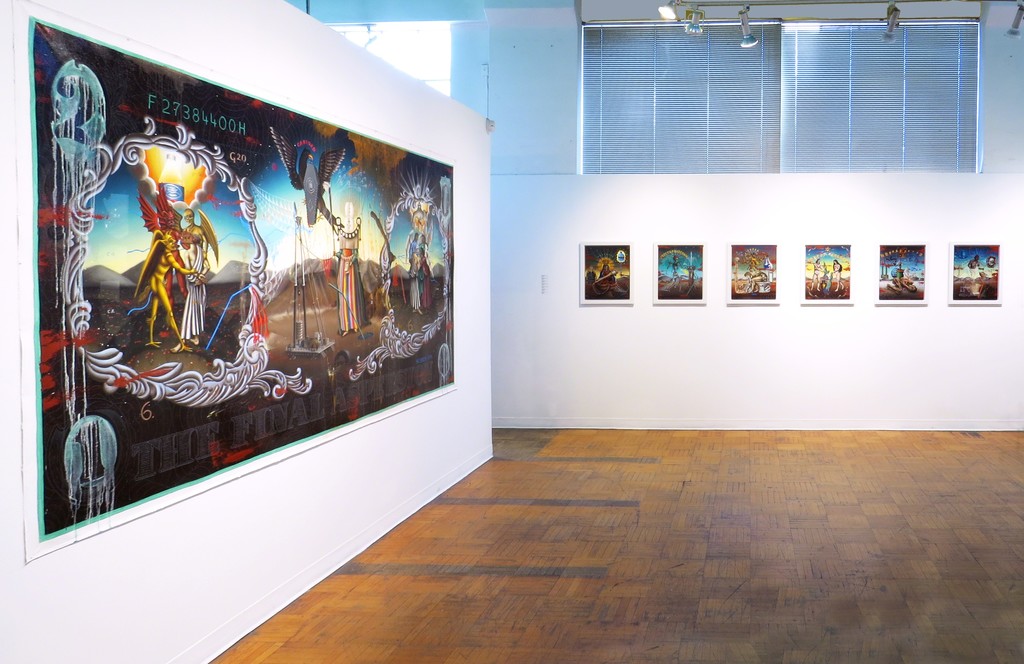 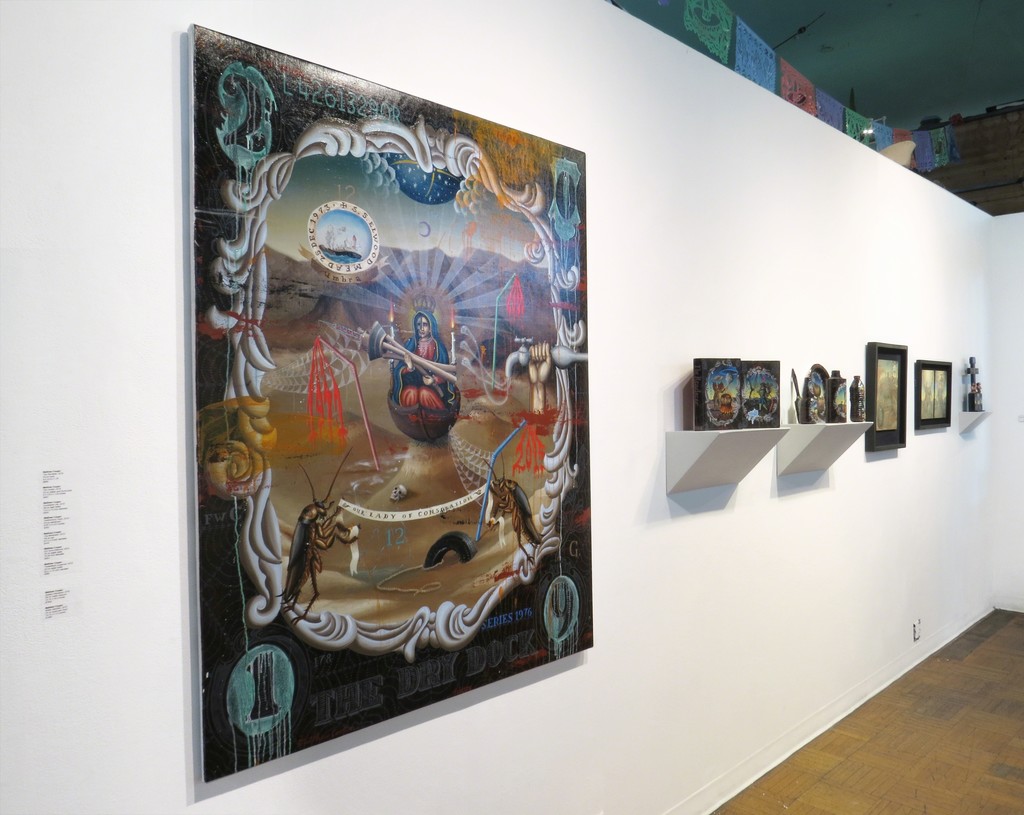 “Within [our bodies], water – which accounts for well over half [of our] total weight – plays an essential role in sustaining life. It facilitates the physiological and chemical processes essential to life. It serves as a transportation medium, carrying dissolved nutrients, hormones, oxygen, carbon dioxide and wastes to their respective destinations within [our] circulatory systems. It helps regulate [our] temperature, primarily through perspiration.”- J.W. Sharp

La Luz De Jesus Gallery is pleased to present In Memory of Water, a solo exhibition by painter Matthew Couper.

Water is integral to life. Couper’s new body of work looks at water rights of the American Southwest and how long-term government distribution of this natural resource continues to affect basic human rights in addition to the surrounding ecosystem where wildlife and vegetation have been destabilized since the 1960s.

At his most recent artist residency in Colorado near the Gunnison River, Couper was immediately drawn to the historical and cultural contexts behind the water distribution of the Colorado River. Dam building, Federal initiatives (Native American Reservations), water appropriations by individual states, and drought all play a significant role in how the land, people, and wildlife have ebbed and flowed, thrived and died.

Couper also emphasizes the human consequences from acute deprivation of water in his painting titled, Hyperpyrexia which depicts the 1906 story of Pablo Valencia. After seven days without water during a worthless treasure hunt in the Arizona Desert’s August sun, Pablo Valencia suffered extreme dehydration that involved a fever reaching 106+ degrees known as Hyperpyrexia. Valencia miraculously stumbled upon Dr. W. J. McGee who recorded the symptoms and treatment leading to Valencia’s survival. McGee later published his findings in the Interstate Medical Journal 13, 1906 titled, “Desert Thirst as Disease.”

It is Couper’s narrative style of Spanish retablo painting that presents these issues in a way that instigates a call to action. For example, Couper uses American currency to frame compositions — the dollar becomes an allegory of provocation. And more symbols like the Madonna, Liberty Bell, plastic straws, satirically illustrate the current state of the water ecosystem that Capitalism is destroying.

Matthew Couper graduated with a Fine Arts degree in New Zealand in 1998. In 2003, he was awarded a Royal Over-Seas League International Scholarship to work and travel in the UK. He returned in the following year to exhibit at Jerwood Gallery, London and to continue traveling in Europe. He held his first public gallery solo exhibition with published monograph, The Museum Of Inherent Vice at the Sarjeant Gallery, Whanganui, after receiving a nine-month residency at the Tylee Cottage Artist in Residence program in 2007. His exhibition ‘Thirty-Three’ (with gallery publication) toured several New Zealand public art galleries and museums between 2011 and 2014. Recently, Couper has attended art residencies at Arquetopia, Puebla City, Mexico; Idem Paris Lithography Print Studio and Manoir du Bonhere, Normandie, France. His work was featured in a large State-wide survey exhibition at the Nevada Museum of Art in 2016 and 2017. He recently completed the inaugural Artist in Residence at aeolian acres/Elsewhere Studios in Paonia, Colorado, USA.