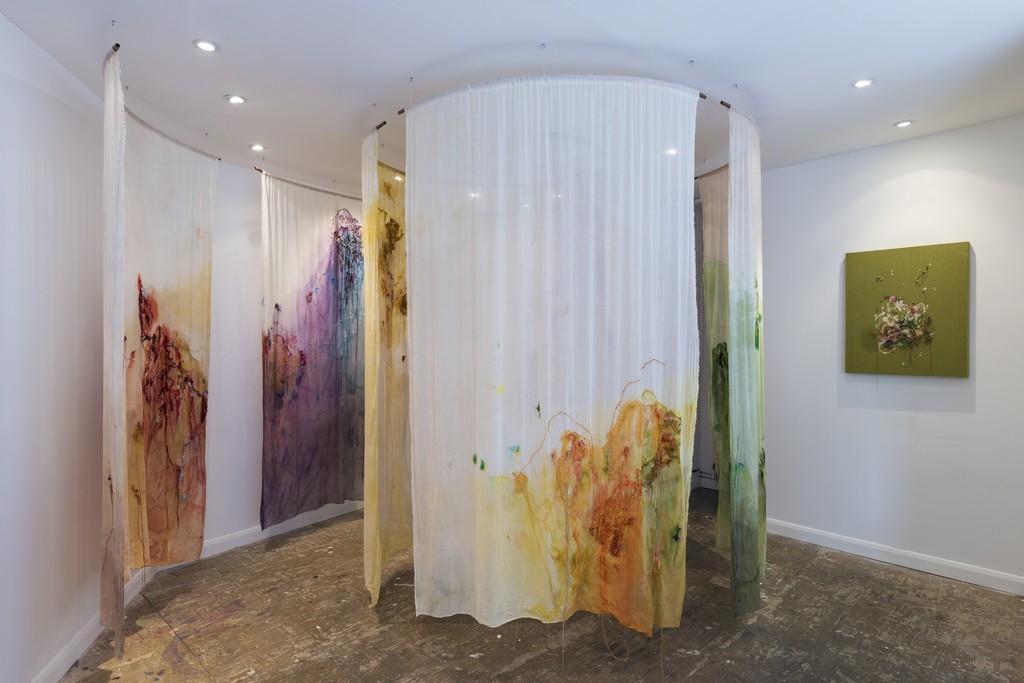 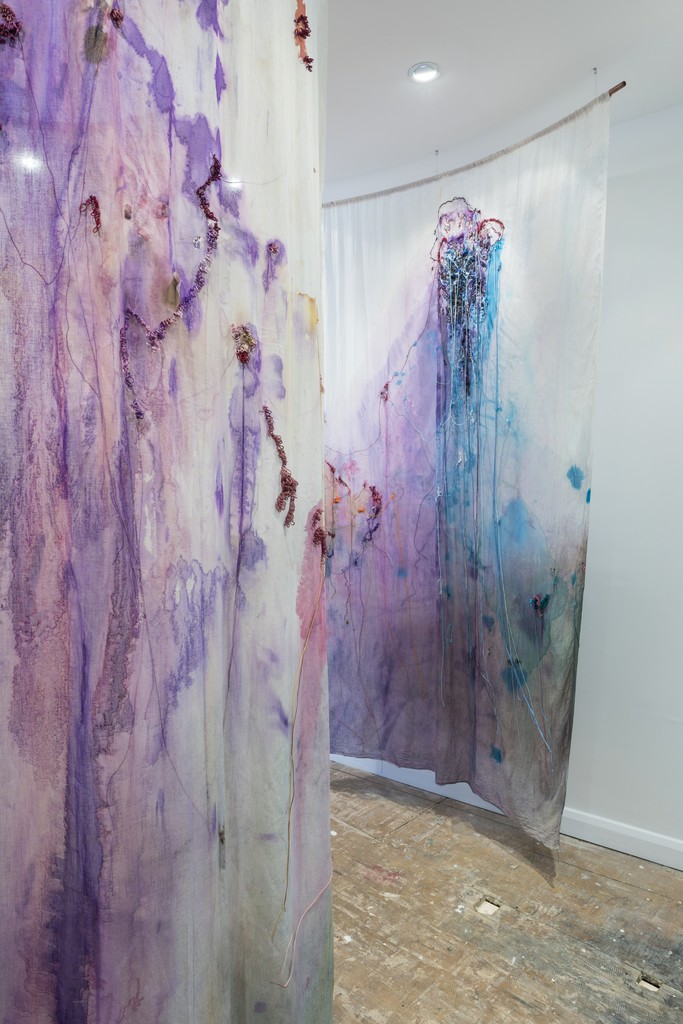 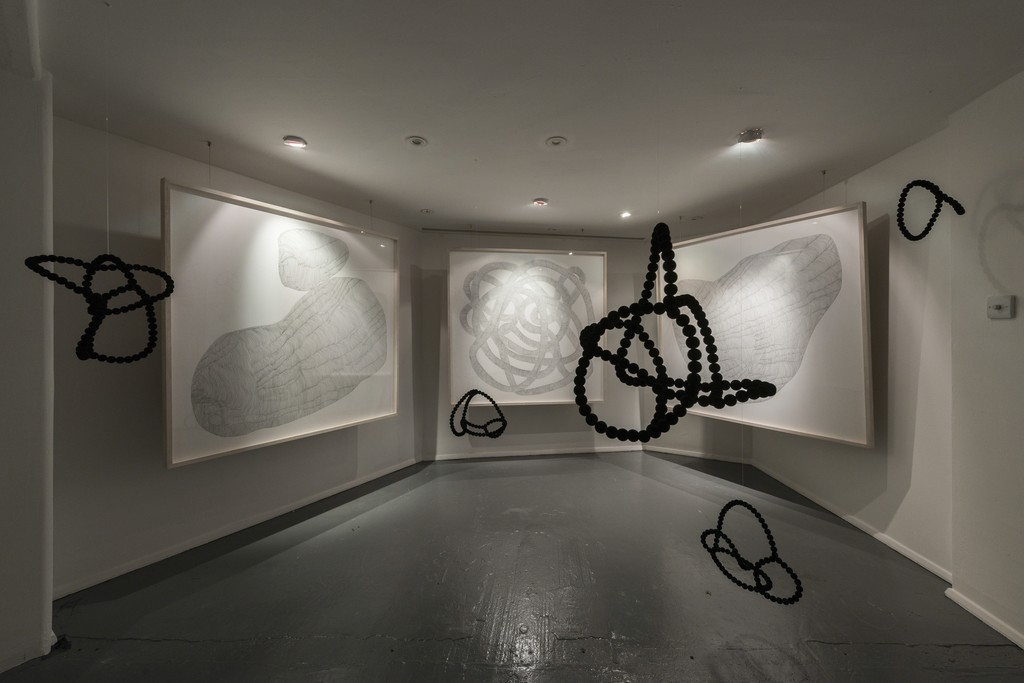 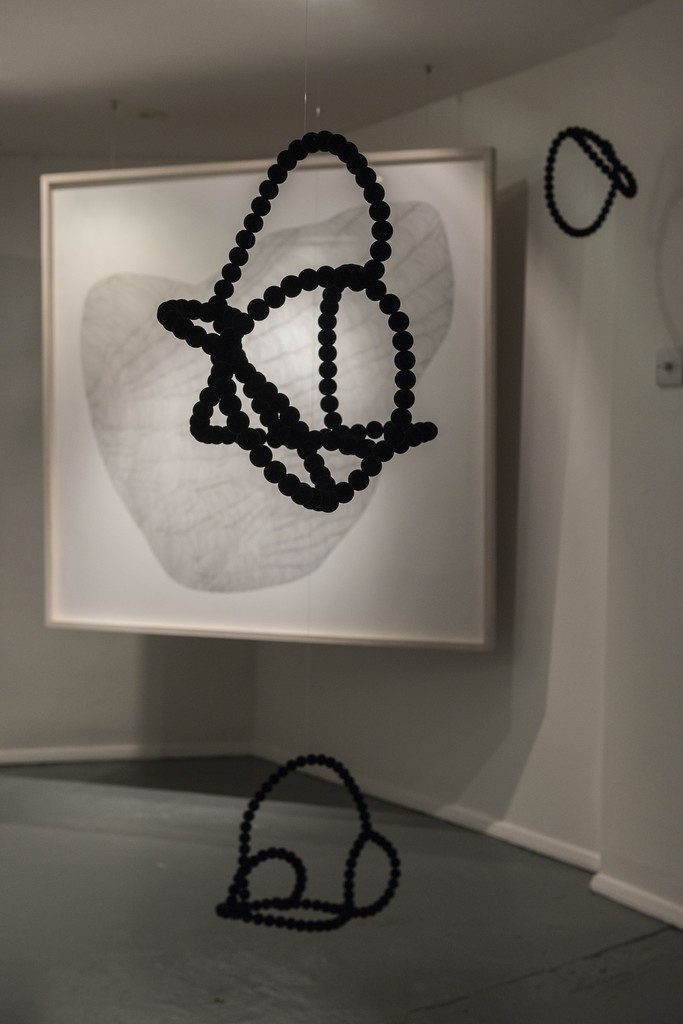 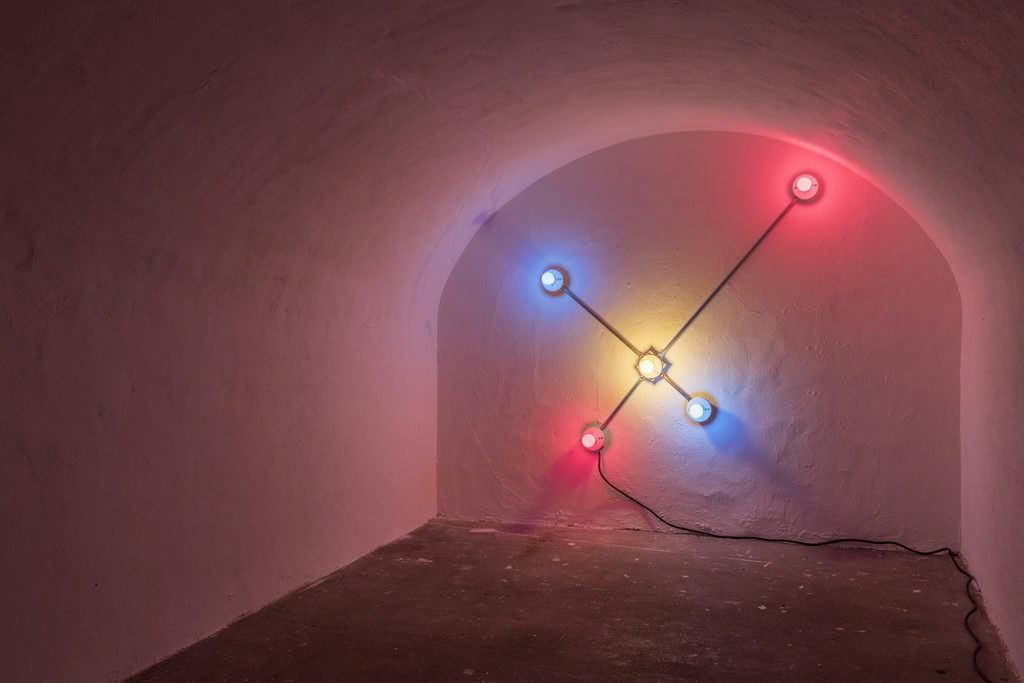 LAMB Arts is excited to present An Irregular Network of Passages, a multi-disciplinary exhibition including works by Camilla Emson (b.1985, UK), Tete de Alencar (b. 1964, Brazil), and G.T. Pellizzi (b.1978, Mexico), curated by Roya Sachs. An Irregular Network of Passages explores the mental and physical pathways we traverse in routing our day-to-day lives, and the obstacles we encounter in doing so. The show, along with the title - referring to a labyrinth, invites audiences to travel through the different channels of these artists’ works.

Camilla Emson’s large scale maze-like installation is split into seven floor-to-ceiling muslin strips layered with natural dyes, capsules, pigment and thread. Referencing Greek mythology and Ariadne’s thread that helped Theseus overcome the Minotaur and find his way out of the labyrinth, Emson’s installation invites viewers to make their own path through the space, following Emson having cut the threads that tie each panel together. Emson continues, “The strange jungle like overflow of threads, and digested capsules refer to the neuroplasticity of the brain, and how the map of our brain is constantly adapting and changing depending on our environment”. Research suggests the more novel, unpredictable or rich the environment, the more our brain alters. Emson aims to display this plastic nature in a jungle form, where audiences can use their instincts to guide themselves through the space. The colours add to this rich environment and speak to different energy points of the body, evoking various senses, associations and memories - giving each participant a unique journey through the installation.

Tete de Alencar’s delicate graphite drawings originate from the outlining of shadows cast from sculptures she had on display in Fundação Nacional de Artes in Fortaleza, Brazil in 2003. The sculptures have since been lost, "I was left only with the shadows!" Explains de Alencar, and only the traces of their existence are now alive in these drawings. The strenuous repetition of lines are laced with emotion as each slight line variation reveals her stream of consciousness in a given moment. Heavier indented lines indicate a clouded state of tension, whereas the softer free flowing lines demonstrate a calmer, relaxed state. Having never made a single mistake in this series, these works are a raw map of de Alencar’s mind, bringing to life the pathways of her instincts. The floating pieces are ‘drawing sculptures’ created in reaction to the graphite works, embodying the movement of the lines and her thoughts.

G.T. Pellizzi’s light sculptures are inspired by the urban landscape, street grid, and construction materials encountered when walking in New York City. Much in the same way, Mondrian was inspired by the energy, movement and grid of the city when he moved to New York and created his New York City paintings. “These works, with their electrical circuits cart, reflect the movement and dynamism of the city fabric while using the materials emblematic of construction sites that abound throughout the city and are indicative of its continuous transformation (for better and worse)” Explains Pellizzi. His ‘light maps’ give weight to the physical pathways created in urban environments, and the way in which we navigate through them. Mondrian’s arrival in New York and his last New York City paintings marked the catalyst for the birth of the NY art scene, with Abstract Expressionism fluxus and Minimalism all coming in his wake. These works pay homage to that lineage, particularly Barnett Newman and Dan Flavin.

The opening will also include a one night only cello performance by Roxanna Albayati, playing De Profundis composed by Martin Gaughan, in reaction to the tension and releases of Tete de Alencar’s graphite works. The piece will be performed at 7 and 7.45pm.