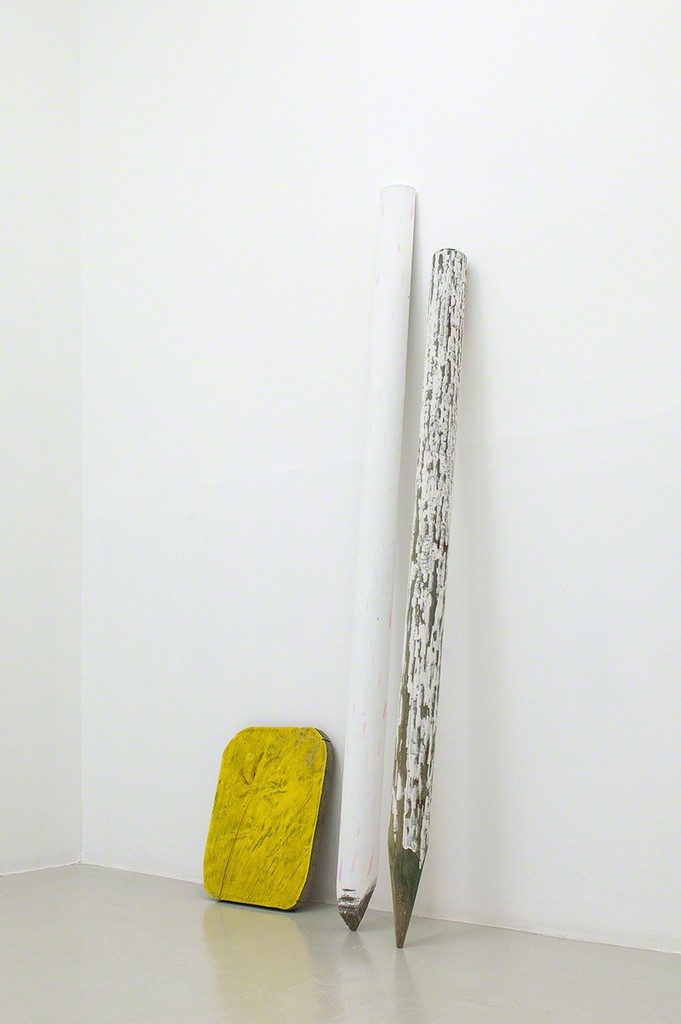 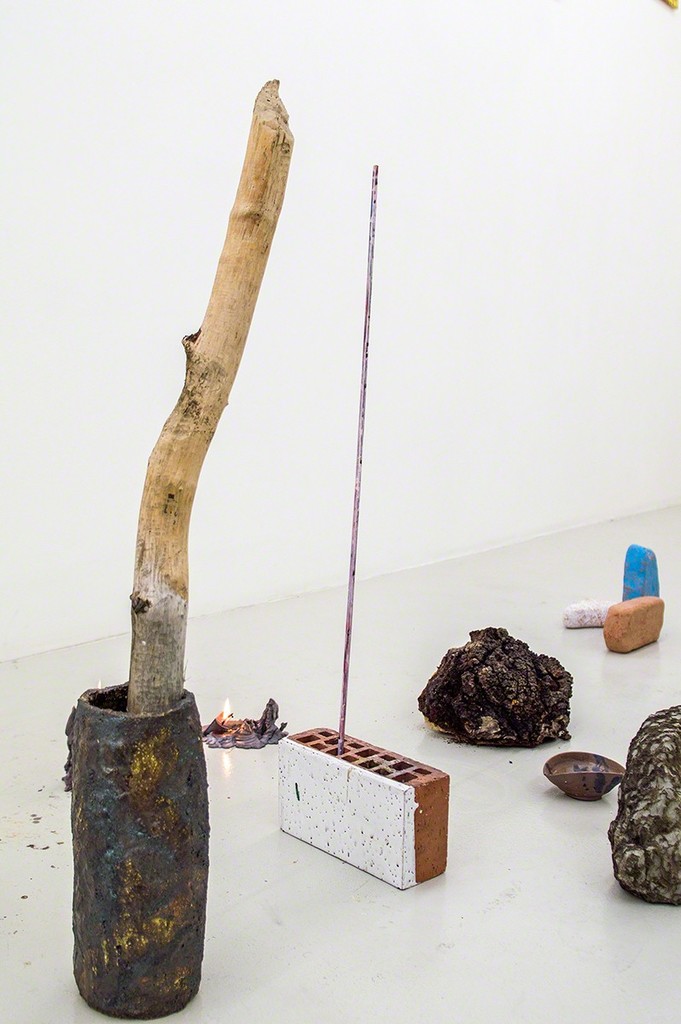 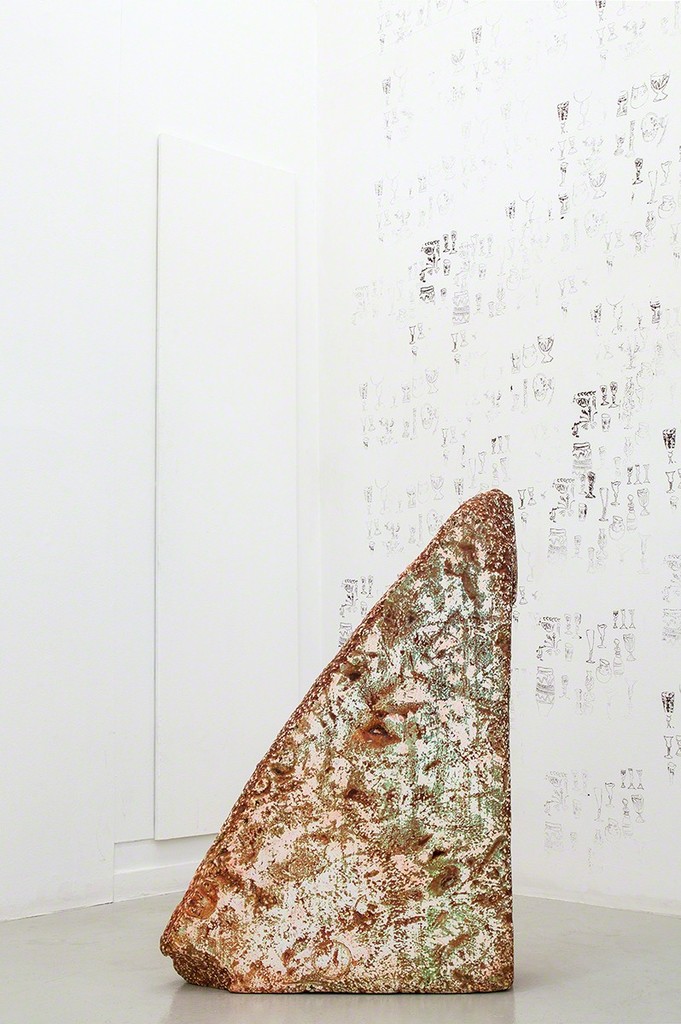 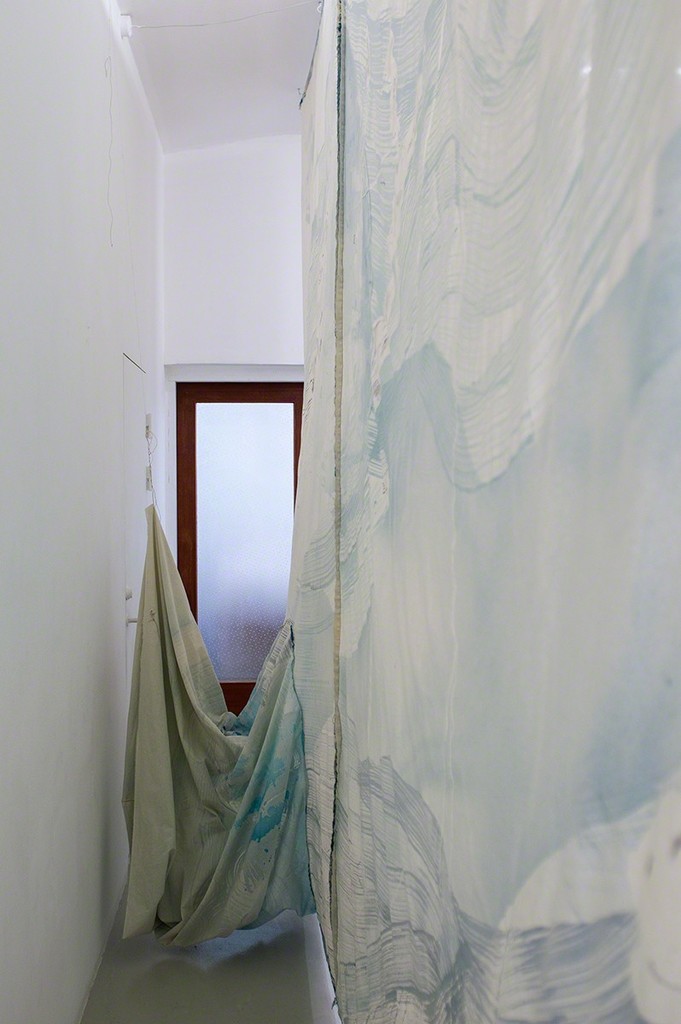 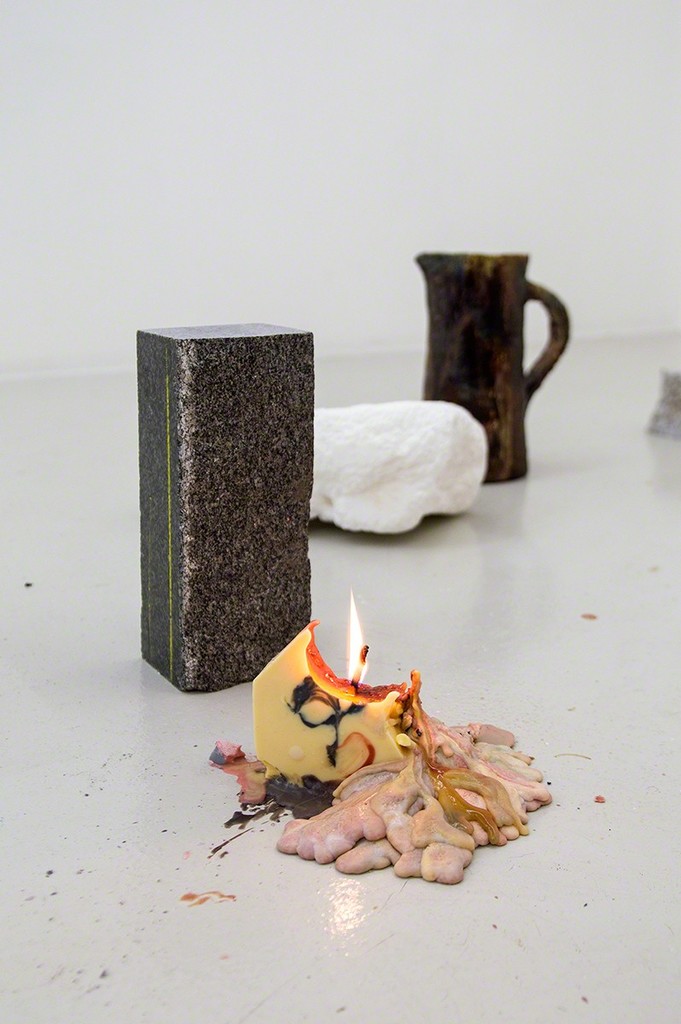 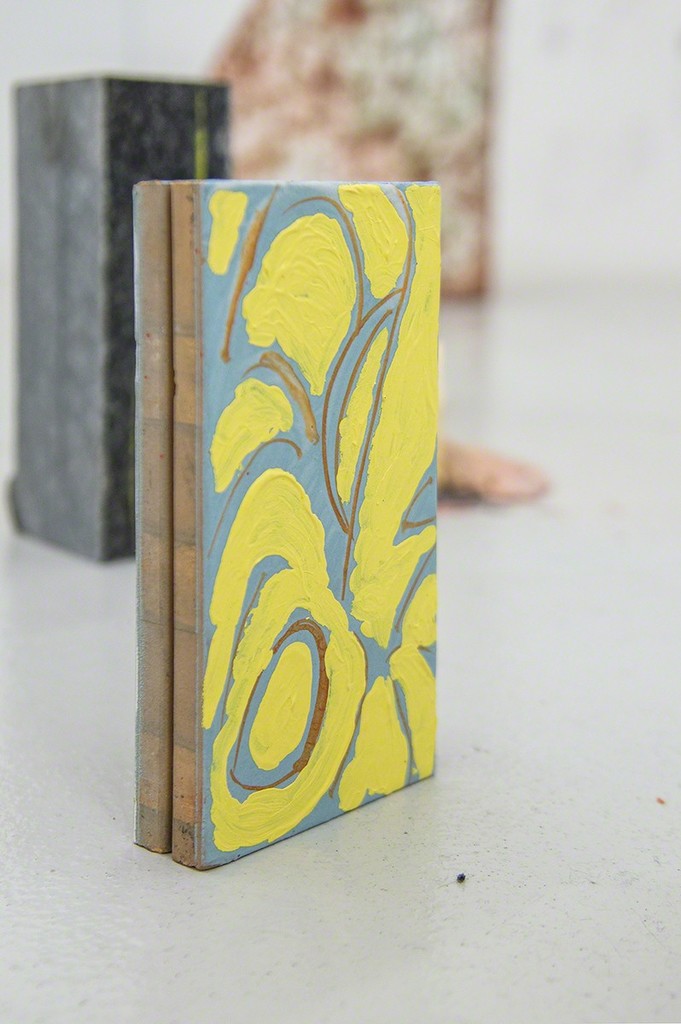 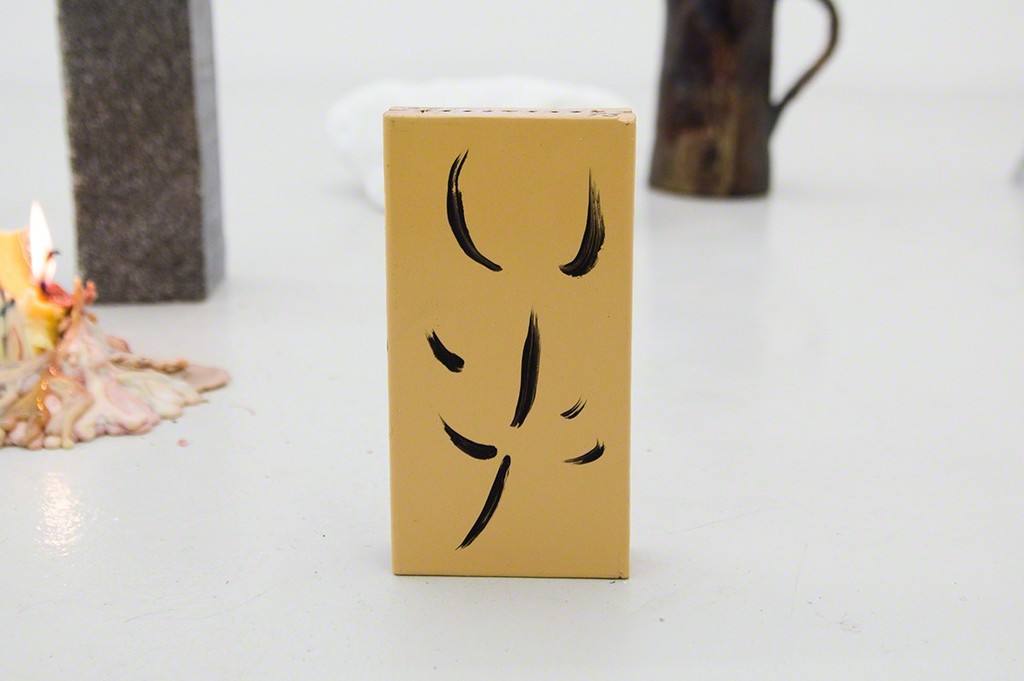 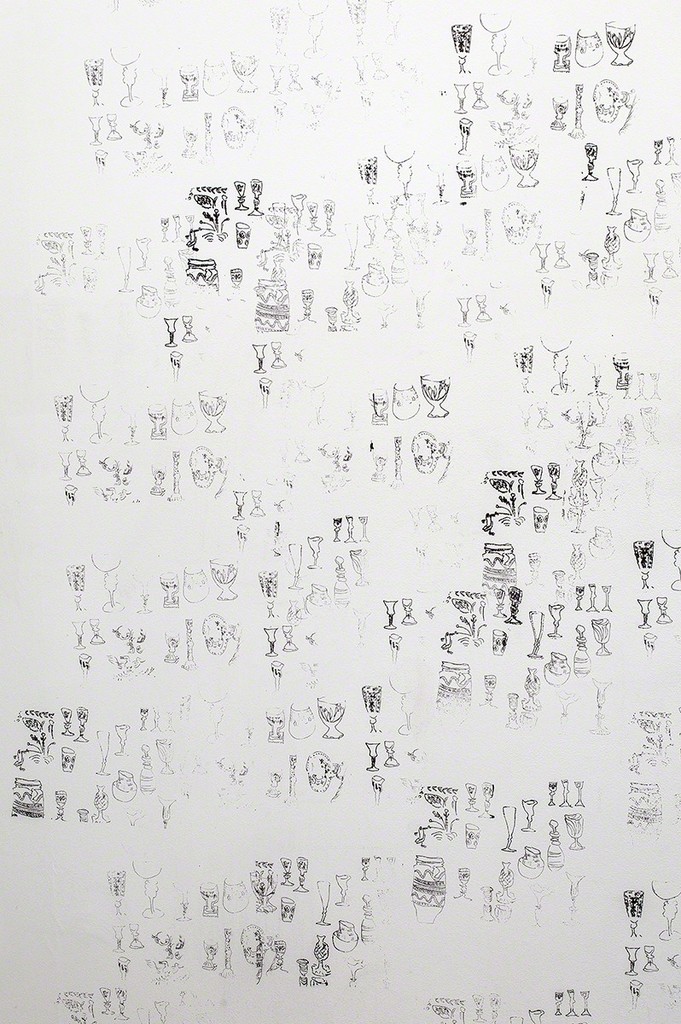 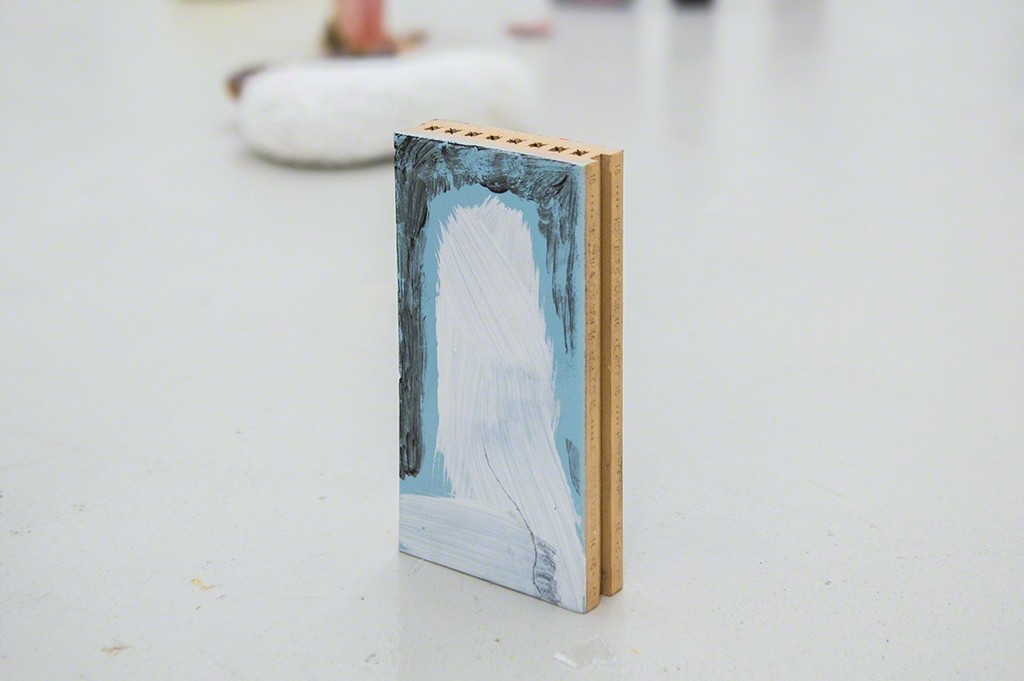 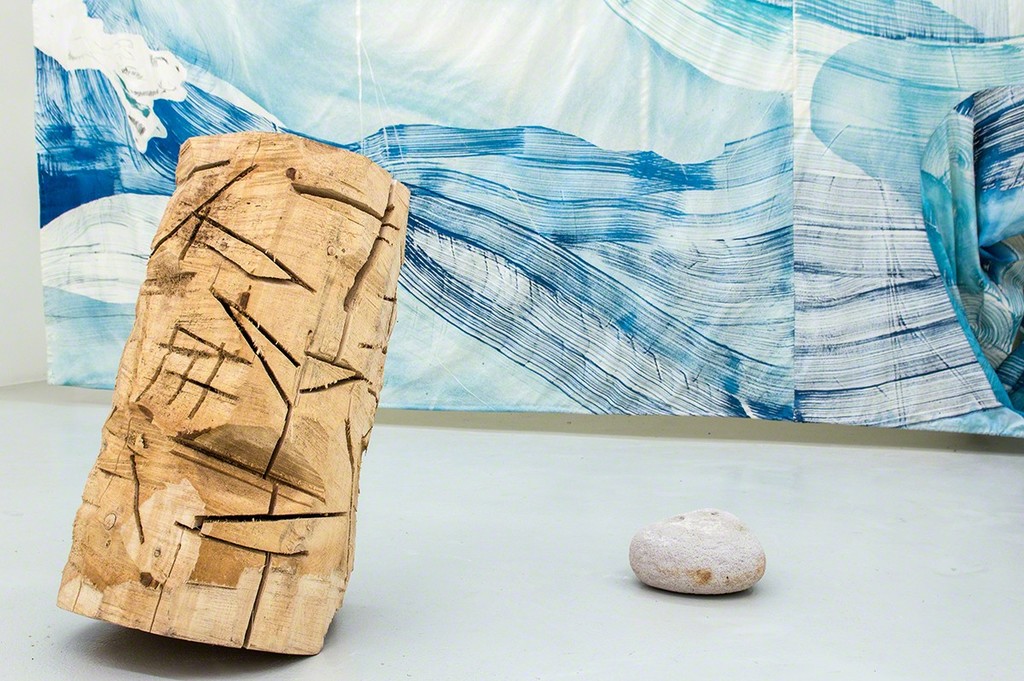 It is a great pleasure to present our first exhibition with Magni Borgehed (SE), Matthew Lutz-Kinoy (US) & Natsuko Uchino (JP) at the gallery.

The exhibition consists of 64 works in various mediums, from painting, cheramics, drawing, wall painting, mobile, sculpture to video, silk-screen etc. The title of the exhibition means "small mountain" in a certain northern Swedish dialect, spoken in Jämtlands-Sikås where Magni Borgehed has his studio.

Text written by Jacob Fabricius in connection with the exhibition:

The man had great legs, great long legs. He had been walking around for hours, weeks, months even. Through fields and forests. Touched water and waves, whilst reaching for the sky. The fresh air did him well and he couldn’t stop walking. His legs he considered his friends, good old friends, which is why he gave them the names Jan and Peter. Peter was left and Jan was right. Peter and Jan. People were often looking at him and followed him suspiciously, when he walked through their town saying Jan and Peter, Jan and Peter, Peter, Jan and Peter, Peter, Peter, Jan and Peter, Jan. Come on Peter, pick up some speed. He didn’t always talk to his legs, but often. He often told them what he saw so they could understand why these walks were so important, so precious. That was the least he could do. After all it was his legs that led him pass the rocky peaks, sloping landscapes, orange groves and the giggling creeks.

Suddenly one day he looked over his shoulder and felt watched. Something seemed to follow him. The man couldn’t see anything, but something was hiding in the bushes. He turned around and continued walked. Looked back, nothing. Continued. He was being watched. Usually he would feel people watching him, but this time it was different. Definitely different. He left the dark forest and found a path that zigzagged through small green hills. After a while he turned around again and saw the first evidence of colour. A blue line had followed him as far as he could see. The colour was present, but still very discrete. A light-blue line. It was as if the man had blue paint on his boots, as if he was leaking colour. He looked but there was no trace of paint on his boots. He looked around him. No paint anywhere, besides the thin blue line. He turned around and walked back through the forest for about 3-4 kilometres to find the beginning of the blue line. It continued and continued. Even on the other side of the forest there was a thin blue line as if a small boy had been on his knees and painted his footprint with blue watercolour. It continued as far as he could see. Blue, blue, blue, blue, blue, blue, blue, blue, blue, blue, blue, blue, blue […] Needless to say he was puzzled, confused and did not know what to do or say, so he sat himself down and looked at the never ending blue line. The man addressed Jan and Peter to comfort himself and to get a possible word of advise. The legs didn’t answer him, he knew they wouldn’t of course. Why should they talk to him now after all these years, it had always been a one-way conversation. He didn’t know what to do, but he tried to wipe off his boots on some nearby rocks and walked around in circles, geometrical patterns it appeared, to try to get rid of the colour. Finally he decided to return to the forest and follow the path where he had just come from, only then did he realise that the blue line of course had followed him back and now for the third time would make a light-blue trace through the forest. He panicked and ran. Ran as fast as he could. When he reached the wavy green hills again he slowed down, still running he slowly managed to turn around and look back. He noticed that the colour seemed to change according to the speed in which he was moving. Darker blue, deep purple and almost ruby red were visible on the umber coloured ground as far as he could see. Light blue seemed like walking and the reds seemed to indicate speed.

The man looked on the ground around him, looked at the gravel and how the woodlogs edge were rounded by water, he noticed how a chainsaw had made its marks on a tree nearby and how the few human made remains were melting into nature, as if a tidal wave had embraced the landscape not long ago. Someone was watching him.

The man walked blue line, blue, blue but appeared not to look, care nor worry about the coloured line that continued to follow him. After 2-3 days he found himself standing next to a riverbed – it was wide but not overwhelmingly deep. As he was standing there eating some flowerbuds, he wondered if he could trick the blue line by stepping into the river or jump over it. He decided to step into the water and then he walked downstream the whole afternoon. First he placed his left foot, then his right foot on the muddy brink. There was no sign of blue. He took a few more steps in the mud before he reached the grass. Blue was gone. Full of joy he found a small path and walked along it whilst looking back. Only then did he realise that he had not talked to Peter and Jan for a couple of days.

A few years later a woman named Hiroko from a small village close to the river Sienna was walking on the banks looking for clay. She used clay for many things, but today she was looking for a harder clay for her new tiles. She knew what she was looking for and soon after she found a good spot and cut away the top layer of the brown clay. Hiroko placed the squares on a long wooden wheelbarrow and went home through the fields.

After a few days in the dazzling sun, the clay had a smooth dry surface. At first glance she noticed how the clay was sprinkled with delicate blue pigment nuances.

Then after drying her eyes with a handkerchief and turning a few of the clay squares Hiroko saw what appeared to be a large oversized footprint.