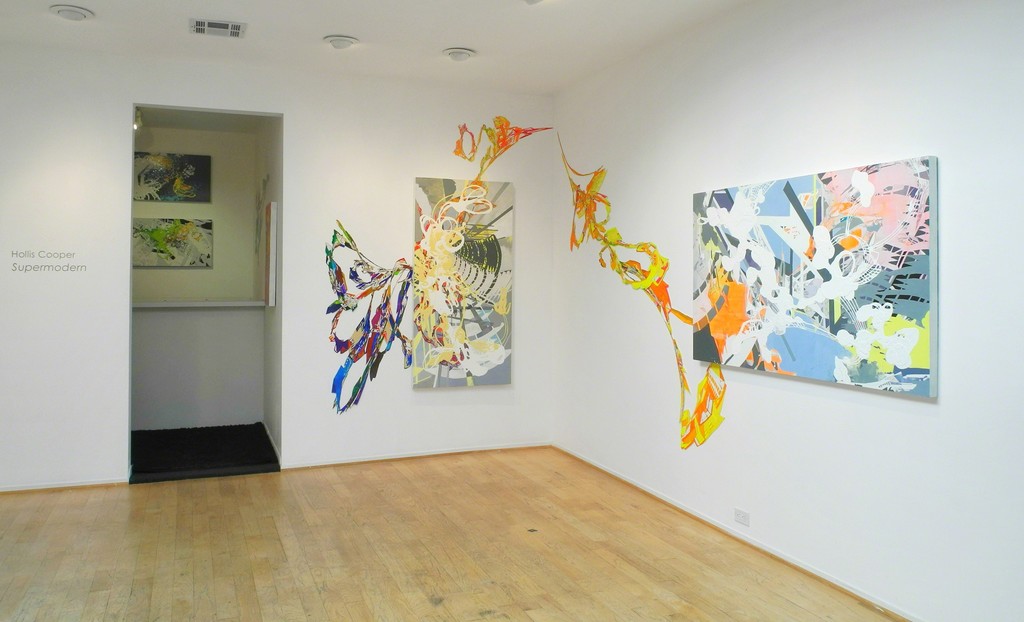 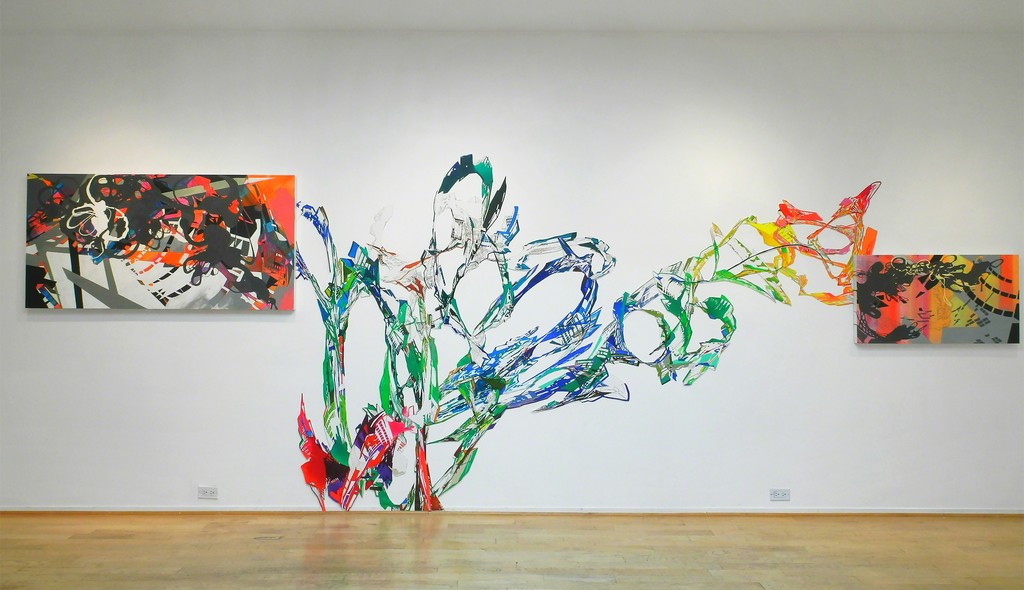 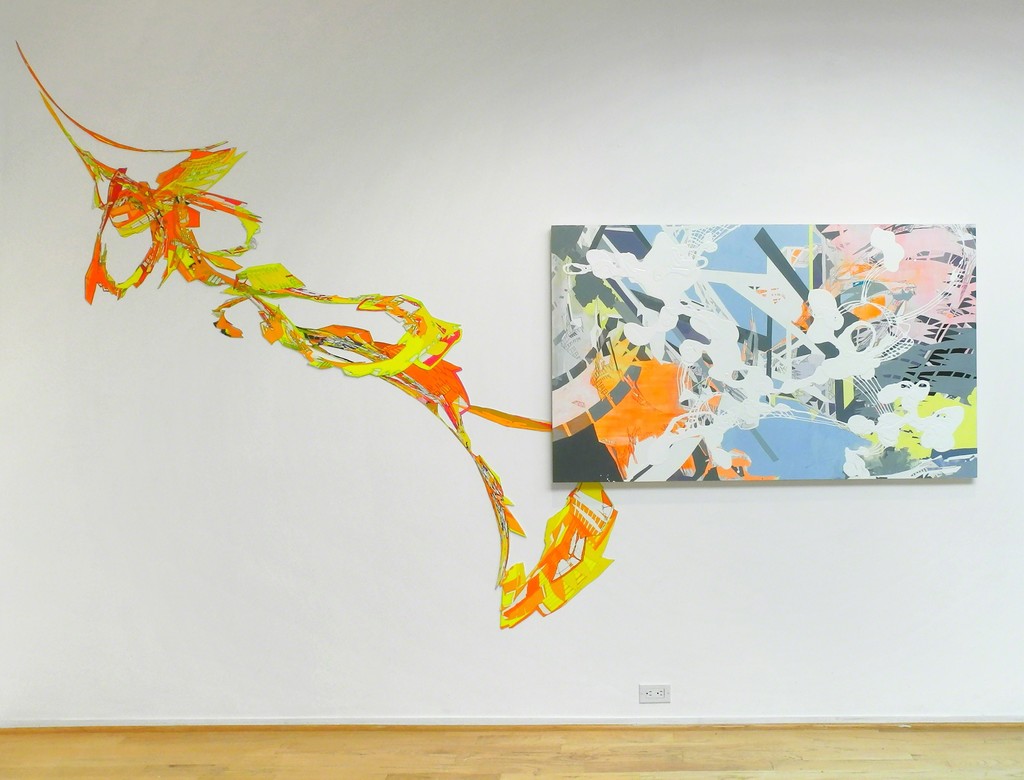 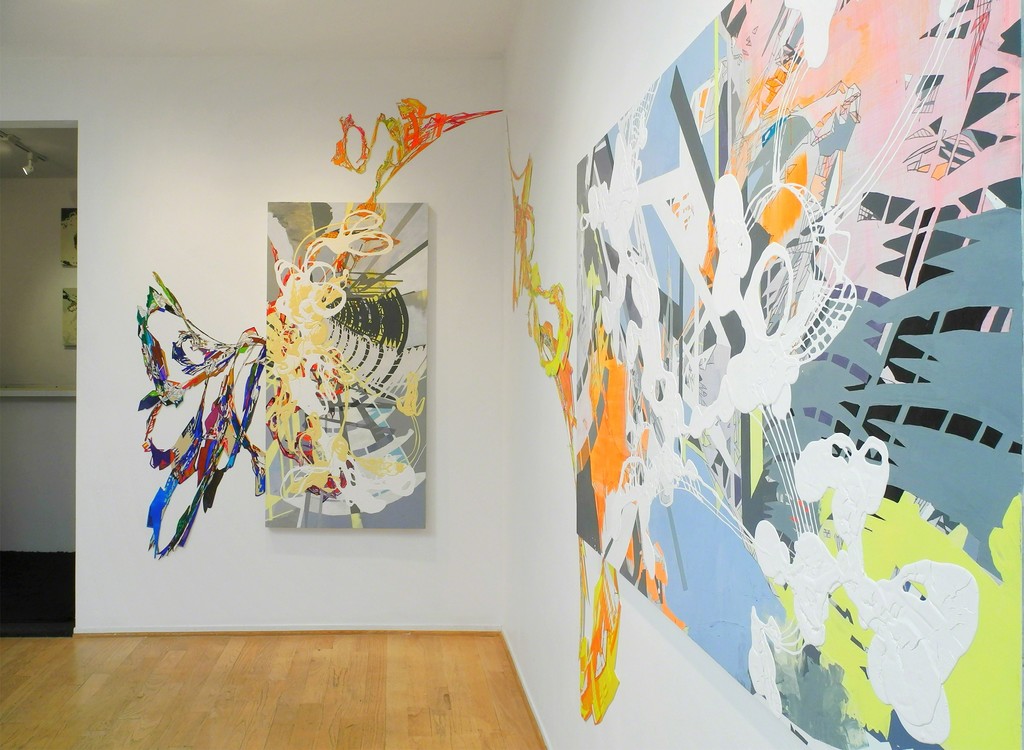 LAUNCH LA is proud to present, Supermodern a new exhibition by Hollis Cooper. Hollis’ latest works are grounded in the tenets of Supermodernism, specifically the concept of ‘non-places’: virtually generated environments as well as dispassionate and utilitarian urban spaces like airports, parking garages, supermarkets. Challenging common perceptions of these places as sterile and blank environments, Hollis’ works seems to bud and grow – bursting onto the white walls of the gallery with lucid color, form and motion.

‘Non-places’ are designed to be neutral and uniform; zones of transit and pure function, rather than places possessing a distinct identity, history or core aesthetic. Their destiny, it seems, is to serve as mute envelopes for some focal point or points within. For Hollis however, these ‘non-places’ are “loci of infinite possibility”, places that can be transformed and directly enlivened by art. Through her large scale installations, the banality of such spaces is negated, transmuted into valuable negative space – an optimal counterpoint to the artefacts of her vivid and stimulating imaginings.

Her process begins with intricate digital depictions of theoretical architecture, drawing on everything from physical ‘non-places’ to videogame environments and 3D chat-room renderings. She work these vectors over, pulls them apart and creates overlapping layers to achieve complex amalgamations of hundreds of varicoloured modular shapes. The epicentre of these works varies, ranging from mixed-media on panel pieces to video-monitors displaying animated, pulsing segments of her digital mosaics. These animated segments interface with the larger installations around them, setting each miniscule modular fragment to motion in a shifting dance of perspective and form – ever approaching and yet evading the likeness of familiar places and objects. Speaking about her process, Hollis explains: “I intend for these works to have both a machine and human aesthetic, becoming a cyborg creation of sorts that is not just a formal exploration of spatial concepts, but the organic progeny of them – an evolution of form, responding to the computer, myself, and its surroundings.”

Much of the synergy inherent in her works seems to originate in the installations that surround and transcend these center-pieces: branching out like arteries or ravenous ivy they transgress into the white-walled sphere of neutrality beyond. These jagged constructions of Arcylic on PVC mimic the grain of the centrepieces and yet are transformed into something wholly different by the room beyond – growing somehow starker, more dynamic and graceful.

In a sudden shift of perspective, her works activate the space around them, drawing the viewer outwards to consider the room beyond, as well as the space they occupy within it – like passive cinema-goers sucked without warning into the narrative unfolding on screen.