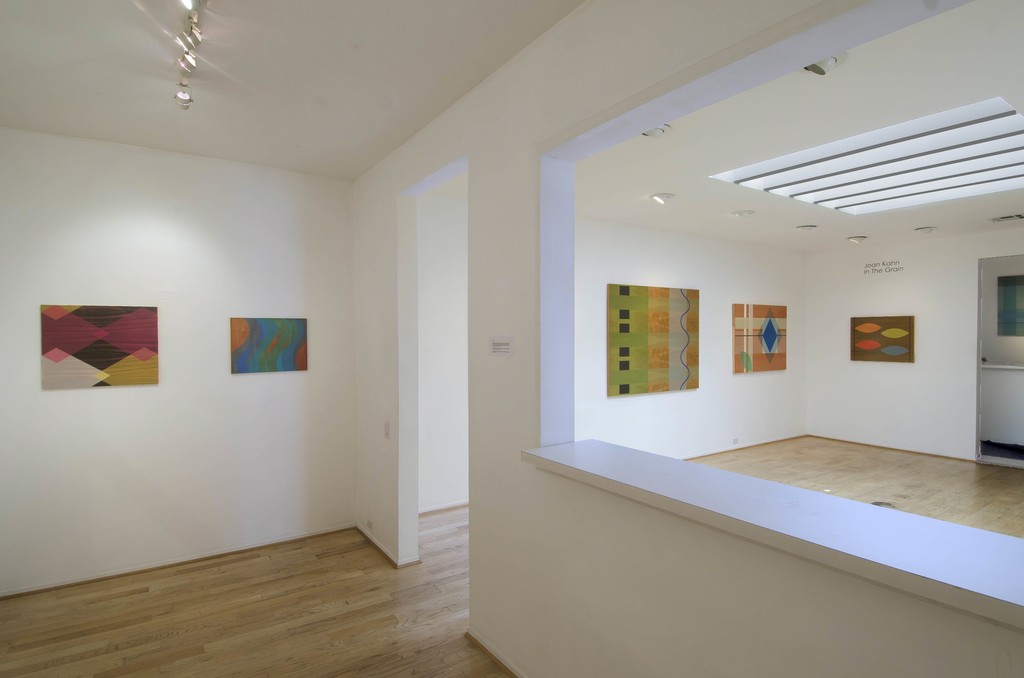 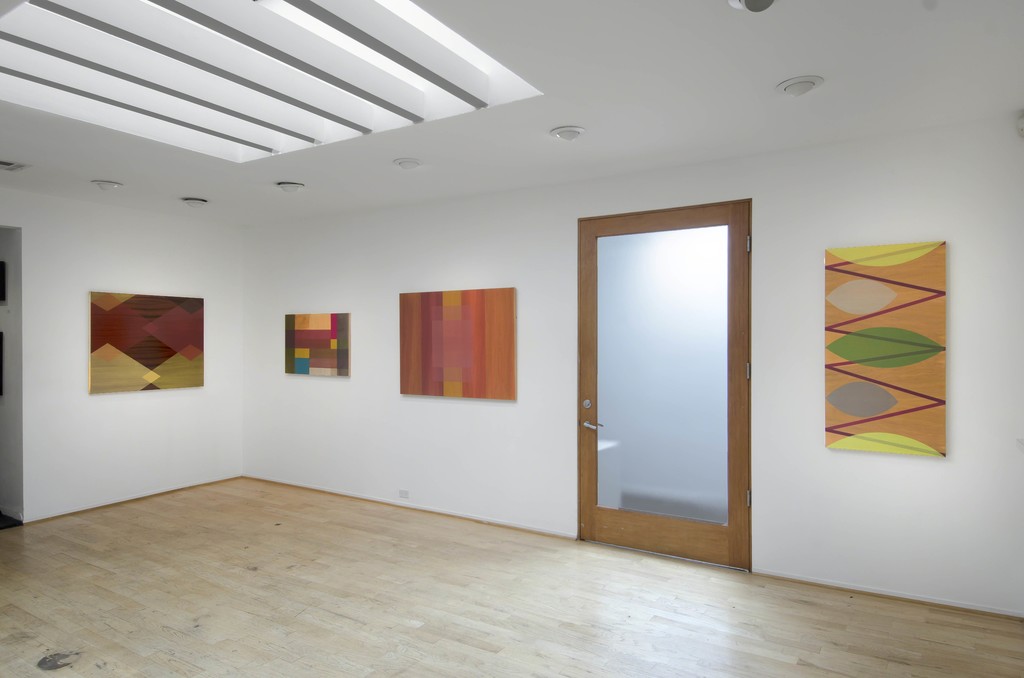 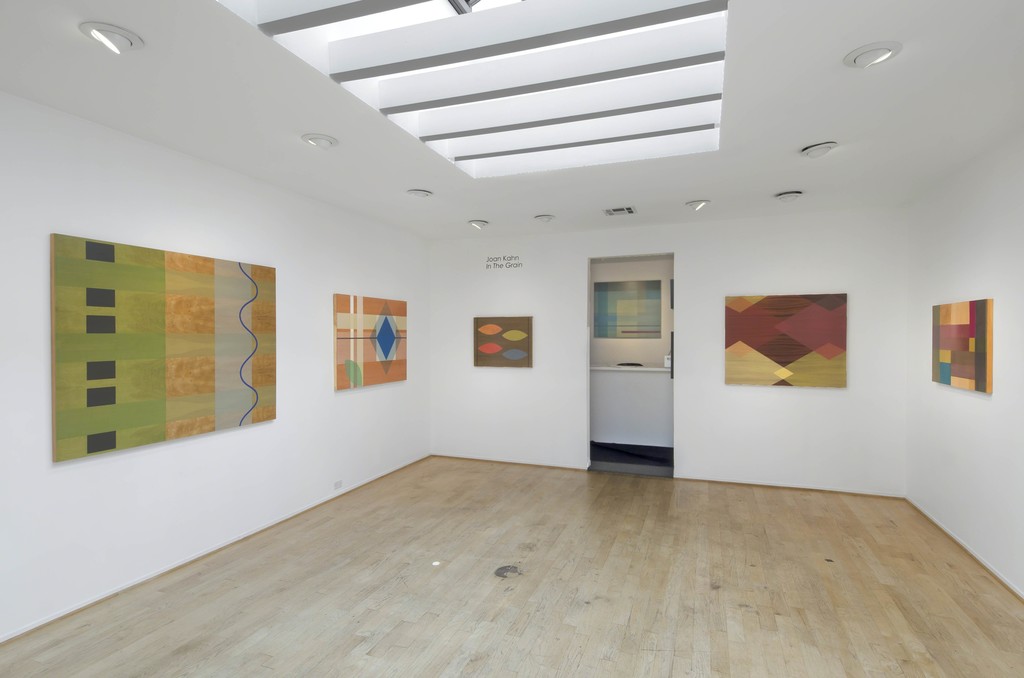 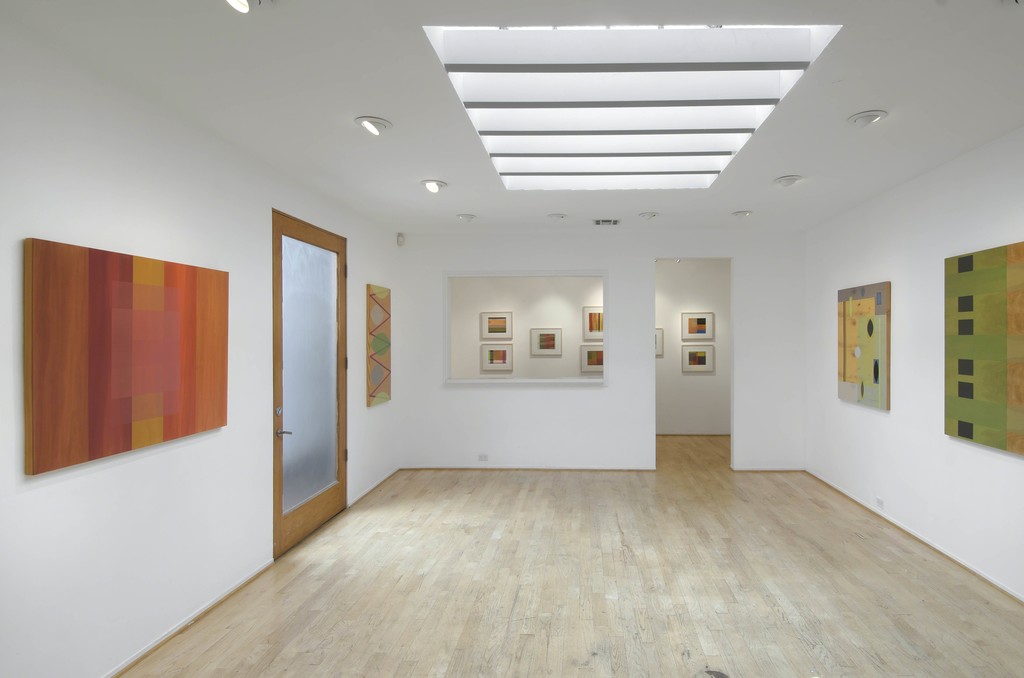 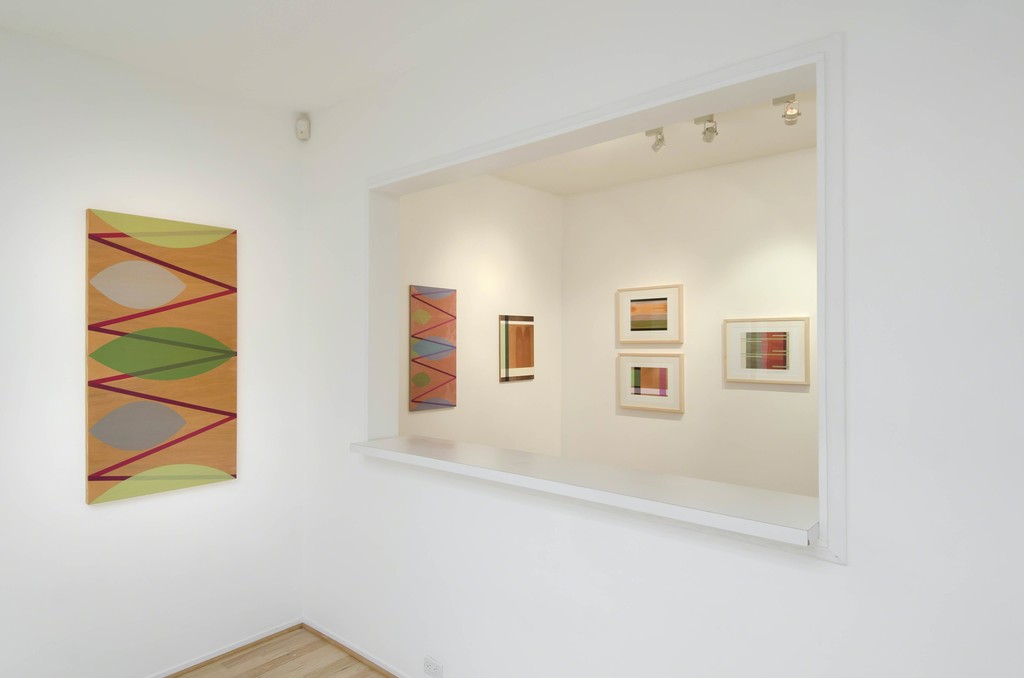 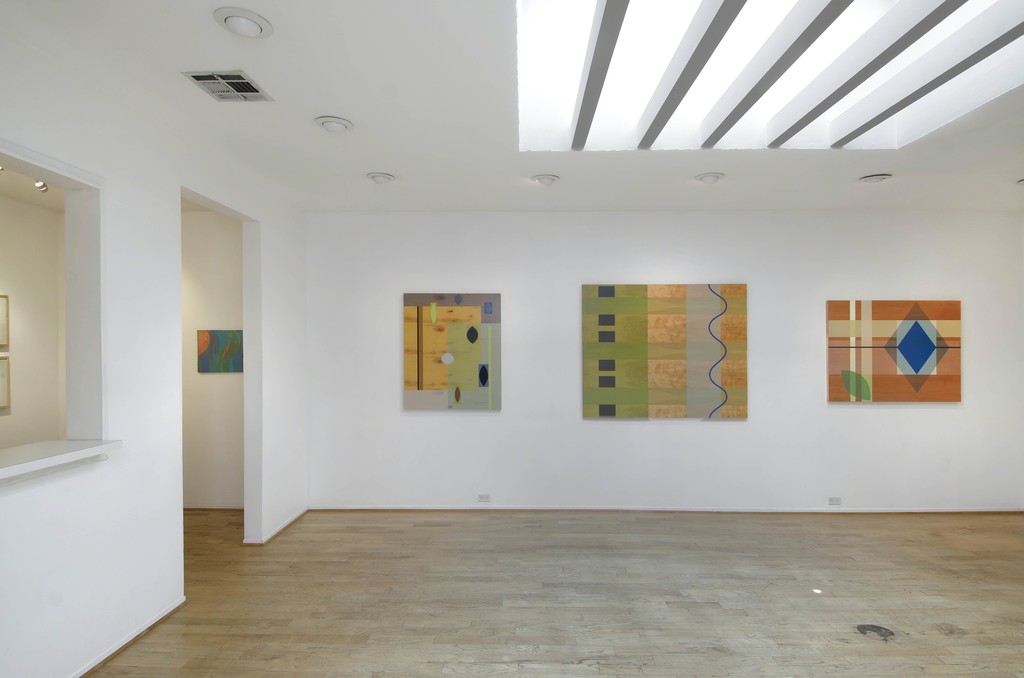 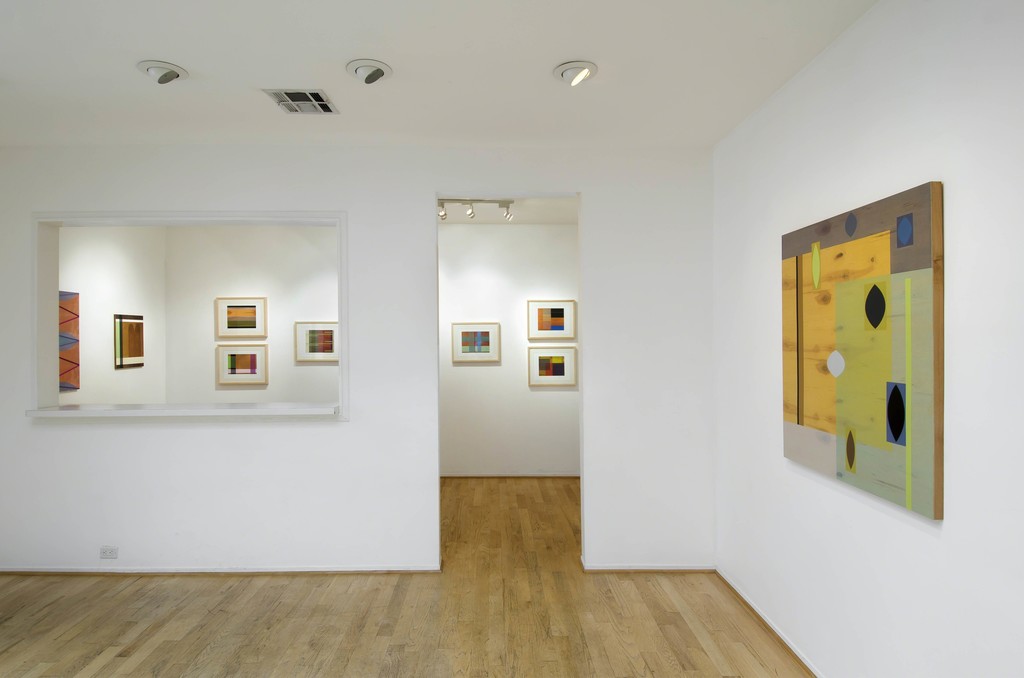 LAUNCH LA is proud to present In the Grain, a new solo-exhibition by Joan Kahn. Kahn's colorful geometric works possess depth and emotional weight that confounds their apparent simplicity. Though influenced by the High Modernism, her art does not seek to isolate geometry as a purely intellectual or rational force. Kahn's geometry is the geometry of life - saturated with arrangements, colors and moods drawn from memories and personal experiences. With paint and pigment, she distils her inspiration into a form so potent and fundamental that it can be imbibed by a viewer in an instant.

Kahn describes her creative process as a "collaborative dance of the organic and the geometric". Her paintings fuse the synthetic and natural, using transparent and pigmented polyurethane or oil varnishes on richly textured wood, empasising its natural detail and tone. Through the smooth, wavy lines and peachy hues of cherry wood and the dots and dashes of dark mahogany, her painfully clean geometric shapes are imbued with a sense of wilfulness - a sense that nature will do as it will, despite the artificial order we impose upon it. Her textures are enhanced by mixing sand into paint, or by the addition of pearl essence and powdered pigments, creating striking transitions between smooth and tactile spaces.

At times Joan twists her formula, creating colourful minimalistic spaces reminiscent of biological formations: shapes that look like leaves, waves and eyes; diamonds that through their placement begin to resemble blossoms balanced precariously on invisible stems. Darkness, light and the relative warmth or coolness of her colors gently nudge viewers, guiding them in their emotional engagement with her work. Her 2014 painting "Rain Dance" is exemplary of this process. Painted in Barnard, Vermont and Los Angeles, the painting absorbed Kahn's surroundings - the deep blue of a small lake near the center of Barnard and the leeched greens and misty blue-greys of a territory with abundant rainfall. Yet when she returned to Los Angeles, a new reality impinged on her work: a city and state in the grip of a historic drought. To reflect these new surroundings, Kahn added a dark grey horizon to the painting - a bleak augury of what lies ahead if human order cannot be reconciled with the ebb and flow of nature.

Despite an affinity to various generations of modernists, Kahn is truly an initiate of ancient ways - a companion to philosophers like Pythagoras who believed that in geometry there was divinity, a truth and order so fundamental and omnipotent, that it predated matter itself. Dispensing with the figurative, Kahn absorbs and expresses her own truths in geometrical compositions at once logical and alive with color and captured light.
Joan Kahn grew up in New York City; Princeton, New Jersey; and Vermont; in an environment that patronized the arts. At home her father, a professor, and mother, a state economist and homemaker, collected nineteenth and twentieth century drawings and prints, Middle eastern rugs, and ceramics, pewter, and old tools. Her grandfather, Max Westfield, was an academically trained portrait painter and her great uncle was a well-known gallery owner and art dealer in pre-World War II Germany.

After receiving three degrees from the University of Wisconsin in studio art with a minor concentration in art history, Joan worked for the National Endowment for the Arts for five years in the Artist-in-Residence Program in schools in the Midwest and on the east coast of the United States. Subsequently she became an art professor in Rome, Italy, for the next half decade, during which time she maintained a studio practice and exhibited solo and in groups.

For the past twenty-five years Joan Kahn has based her life as an art professor and artist in Altadena, California, where she maintains a painting and drawing studio surrounded by nature and a thriving garden. She spends part of each year in Barnard, Vermont, on family property where she paints in the studio, swims in the pond, and walks in the woods.

Joan currently teaches at Art Center College of Design, Mt. San Antonio College, and Pasadena City College. Her paintings are exhibited nationally, most often in galleries on the east and west coast of the United States.