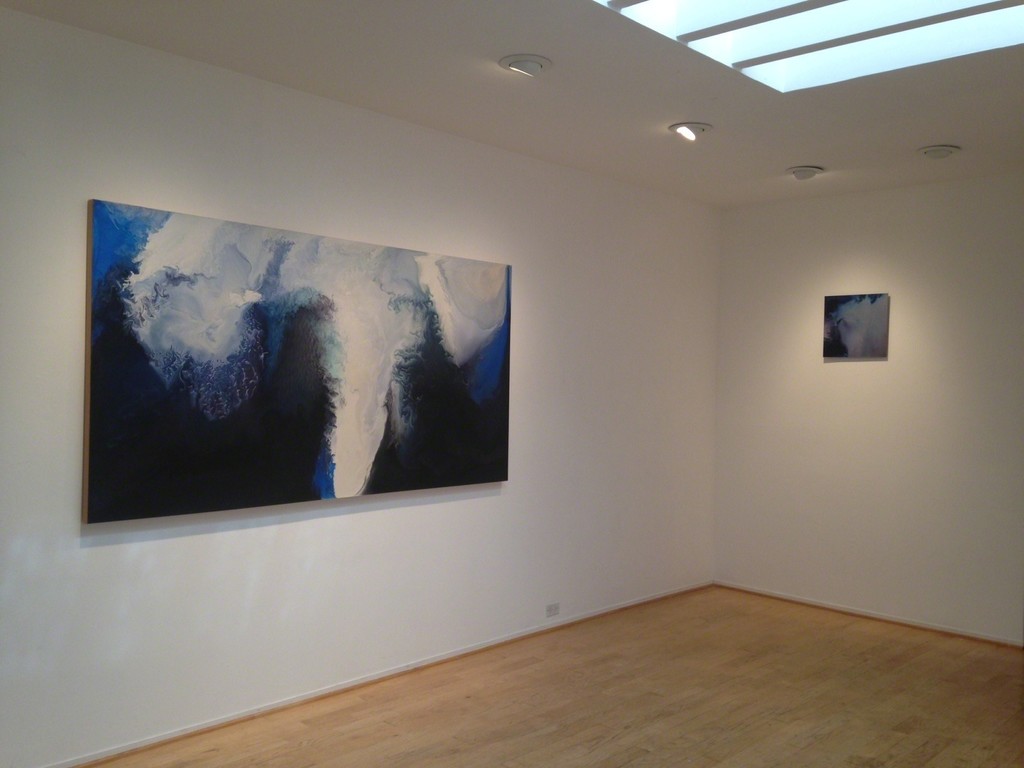 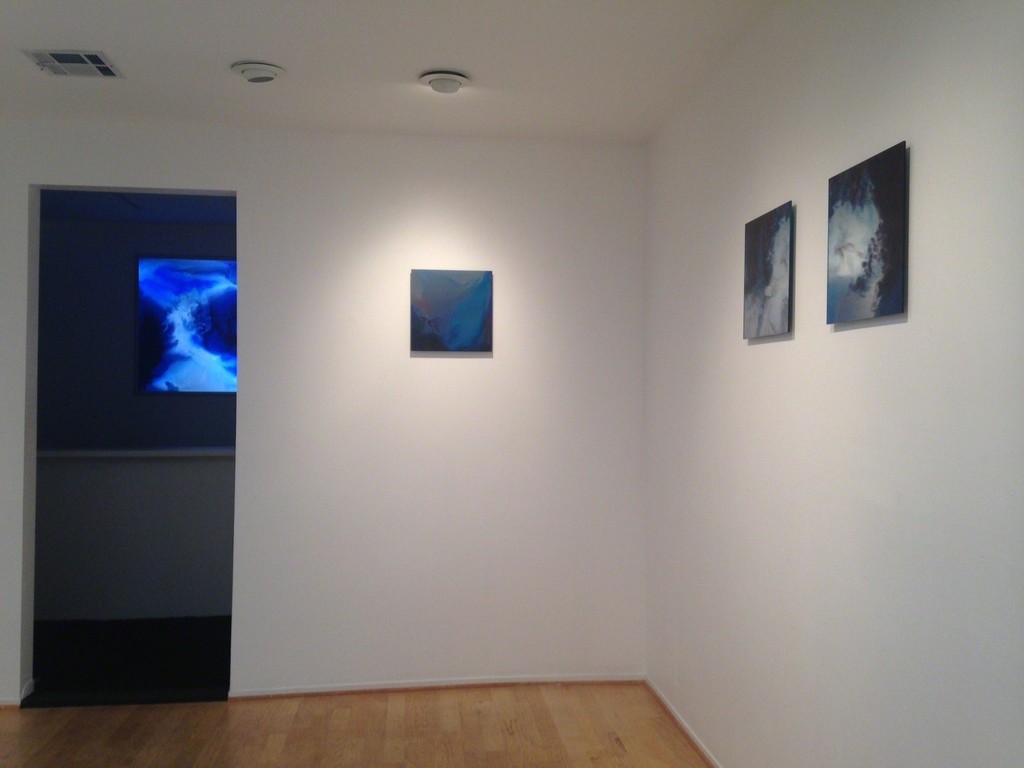 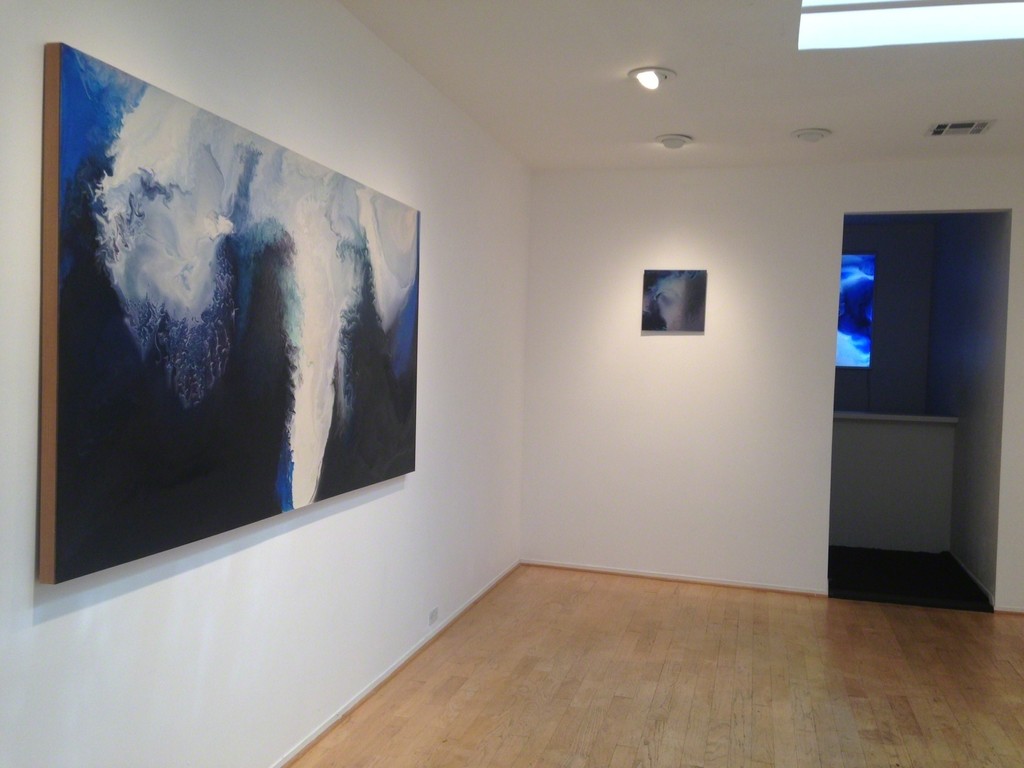 At times, when the video camera seems to spin in Looming Atmospheres, it feels like your gaze travels up from earth to sky, not clockwise across a flatness. Though in fixed position, its every-shifting views evoke the vertige of an astronaut’s sight of Earth’s curvaceous atmospheric horizon, diving through clouds, emerging along shorelines. I always want to say fjords. But these images and the emotive score that accompanies their succession of forms is not on the Space Station – it is happening in the studio of painter Suzan Woodruff, and it is not the lens that moves but rather the apparently boundless gyrating plane of the proprietary “gravity easel” she invented over a decade ago, and the luminous surfaces of the mixed media acrylic paintings she makes with it.

Having developed and endlessly refined a mechanical system and technical process which both incorporate and materially replicate natural phenomena like wind, rain, fire and the movement of tides, Woodruff is also attuned to the more esoteric implications of her work, such as the idea of controlled chaos and surrender to the natural laws, and aspects of both feminism and environmentalism. Although she will be showing the large singular work Galactic Dust Bunnies (a sister to the piece whose making is chronicled in the video collaboration), as well as a small number of color-shifting mixed media on acrylics from the Galactic Dust Bunny (GDB) series, this show is something of a departure for Woodruff, in that the video work is truly its central component.

The video has the quality of microorganisms at play, or pouring milk into water, of biological materials mingling, of watching icebergs melt into rising seas before our eyes. When the music gets fraught new intrusions of pigment lay waste to what had seemed to be settled compositional topographical matters. It is something of a slow-motion apocalypse, beautiful and fearful, seductive and inexorable, organic and toxic. The music sets the mood but was inspired by the imagery. The composer Nathan Currier edited his own “video of the moving paint” to his original oratorio Gaian Variations, which has premiered on Earth Day 2004 at Avery Fisher Hall.

An ardent environmentalist himself who regularly contributes writings on climate change to the Huffington Post, science think tanks, and elsewhere, Currier sees Earth as a single, self-regulating system, and fir him, Looming Atmospheres, is about acknowledging the “symbiotic processes which underlie all self-regulatory processes, at all scales, and which we see as key to avoiding Anthropocene self-annihilation.” This sentiment, while certainly ominous, finds common cause with Woodruff’s most recent series’ focus on the increasing heat, super storms, riding tides, and melting ice that plague our planet. Both artists however, see the arts as a real path to possible salvation. Currier notes that, “Just as Wagner saw music and word as conjoined symbiotically, music and painting here seek a new symbiosis, altering each – temporalized painting, timelessly looped music…” It is an art, hopes Woodruff, that through spirit and technology, “can alert us to what seems the obvious crisis can hopefully create more action and response.”