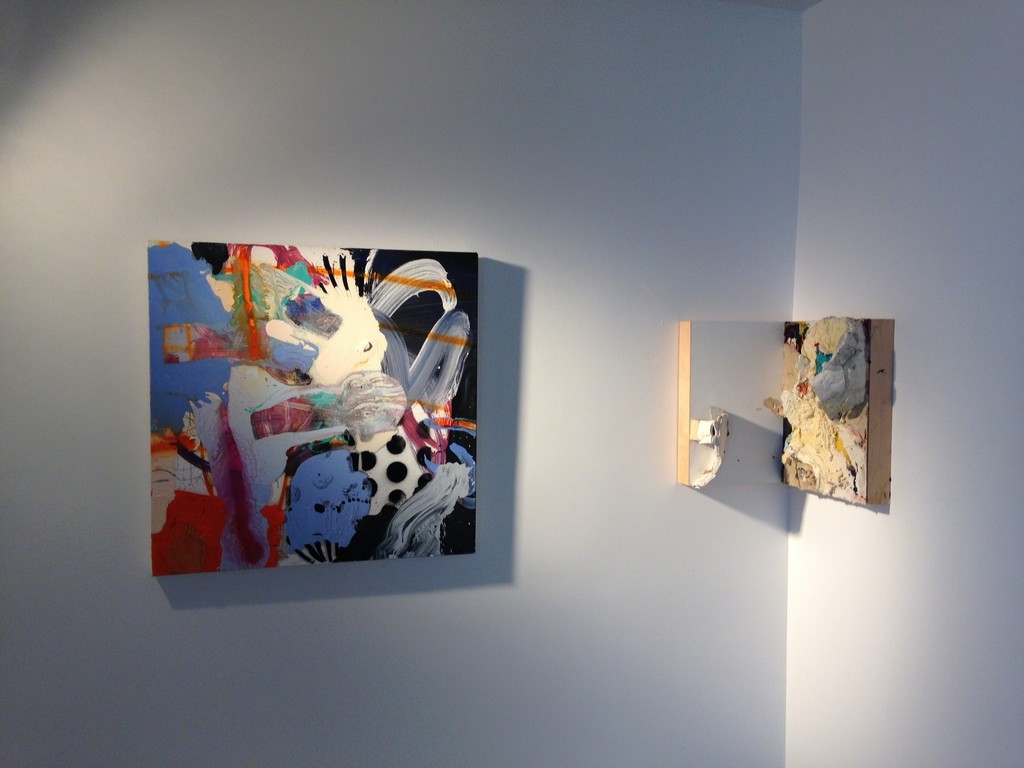 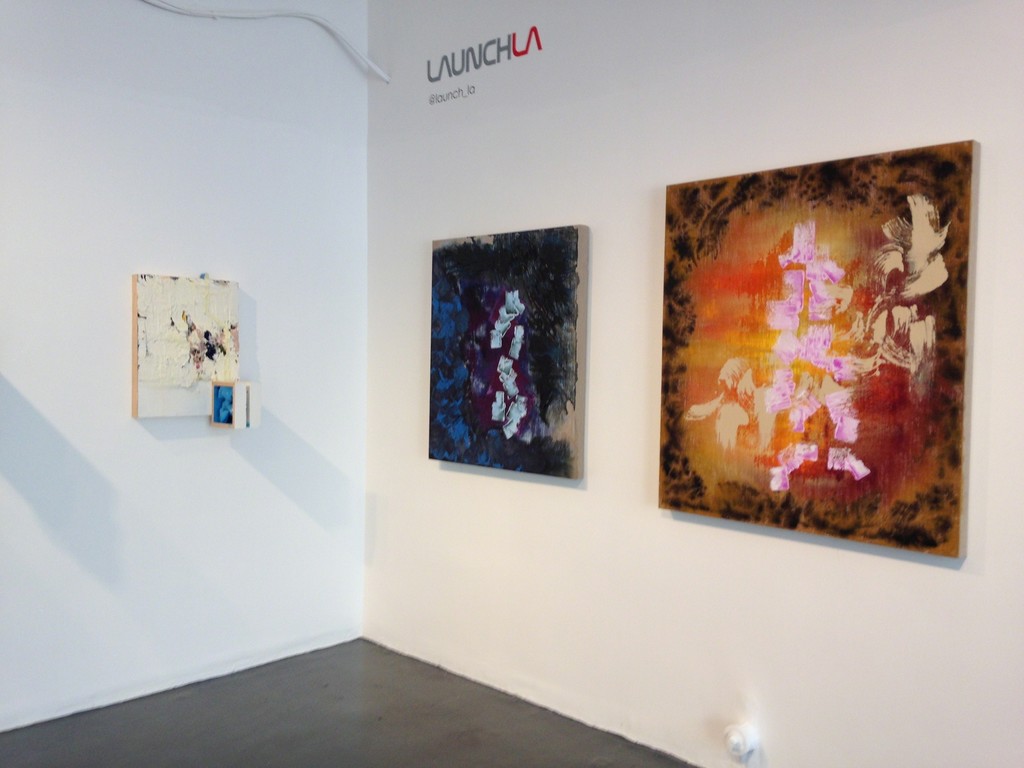 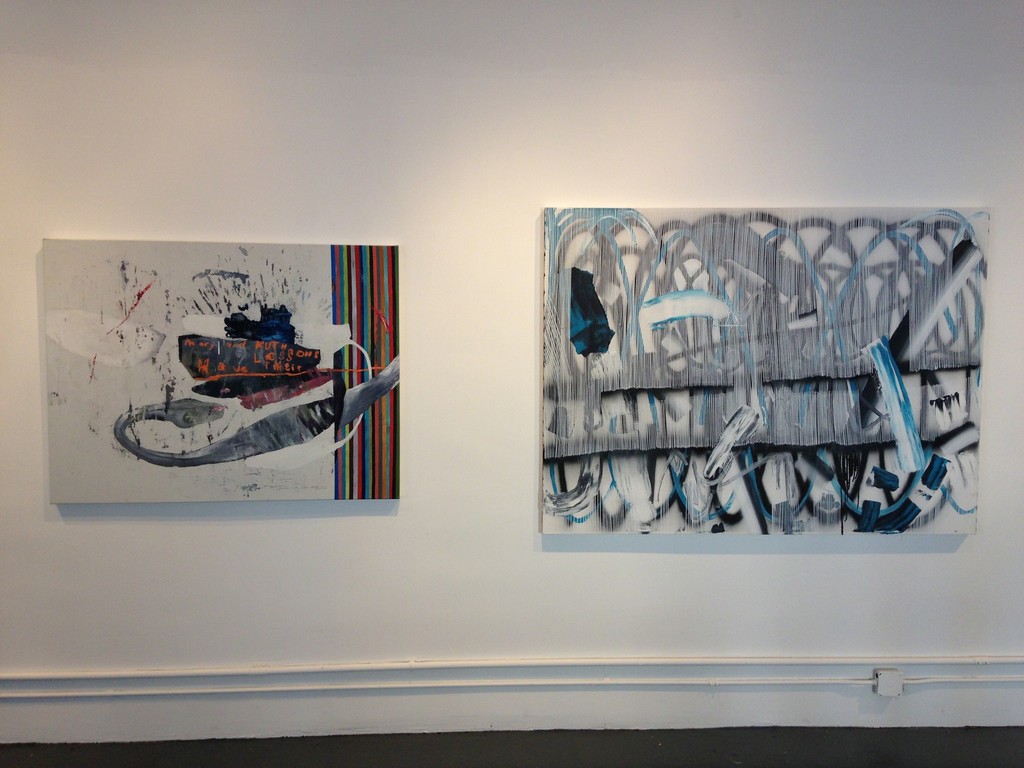 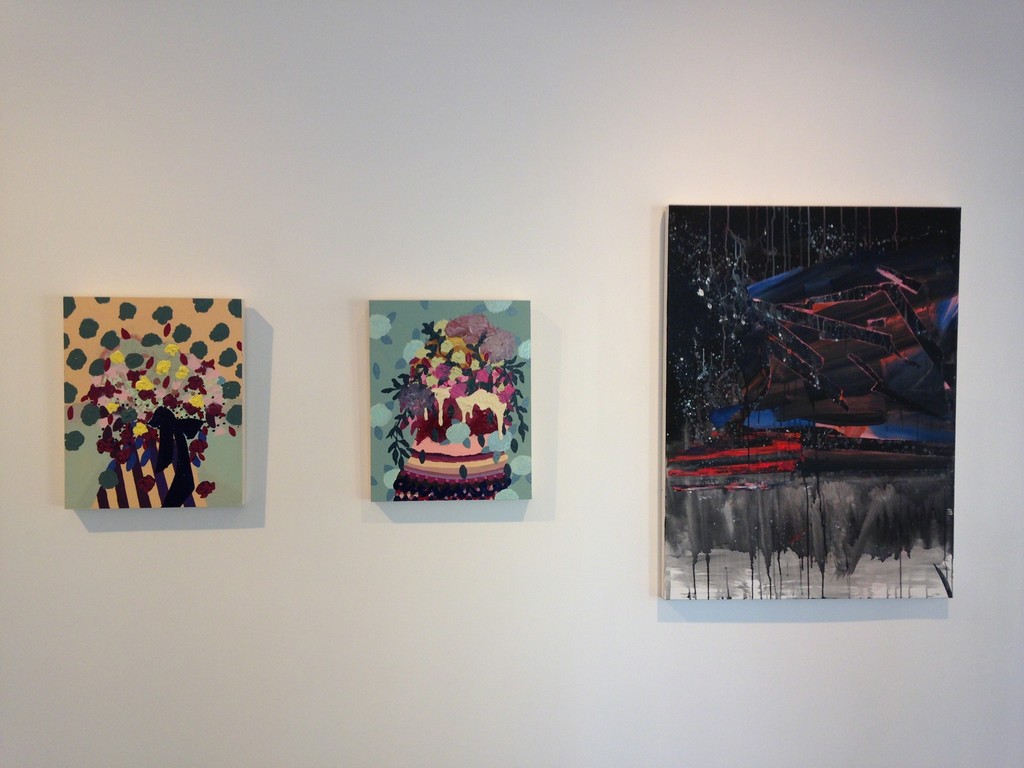 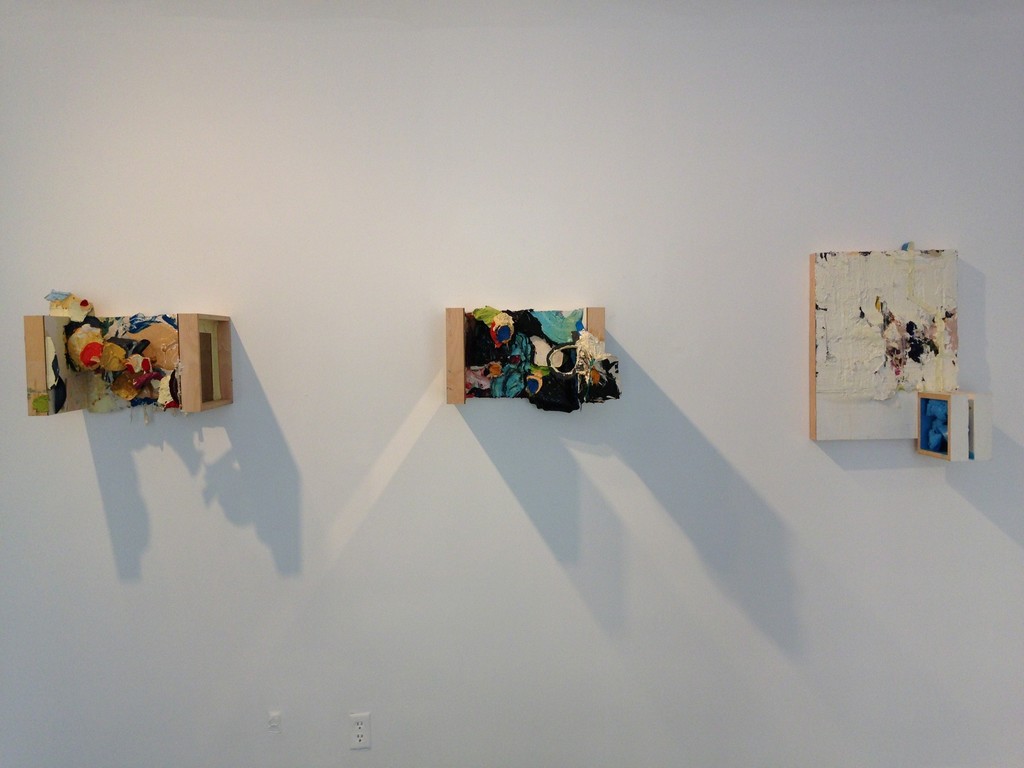 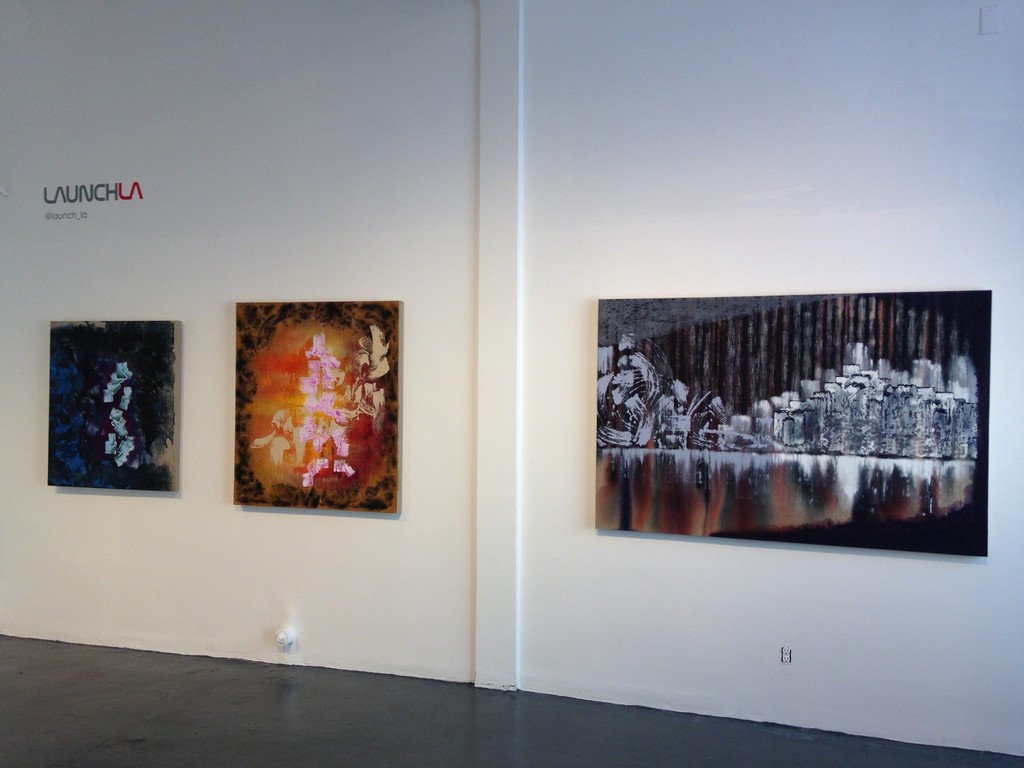 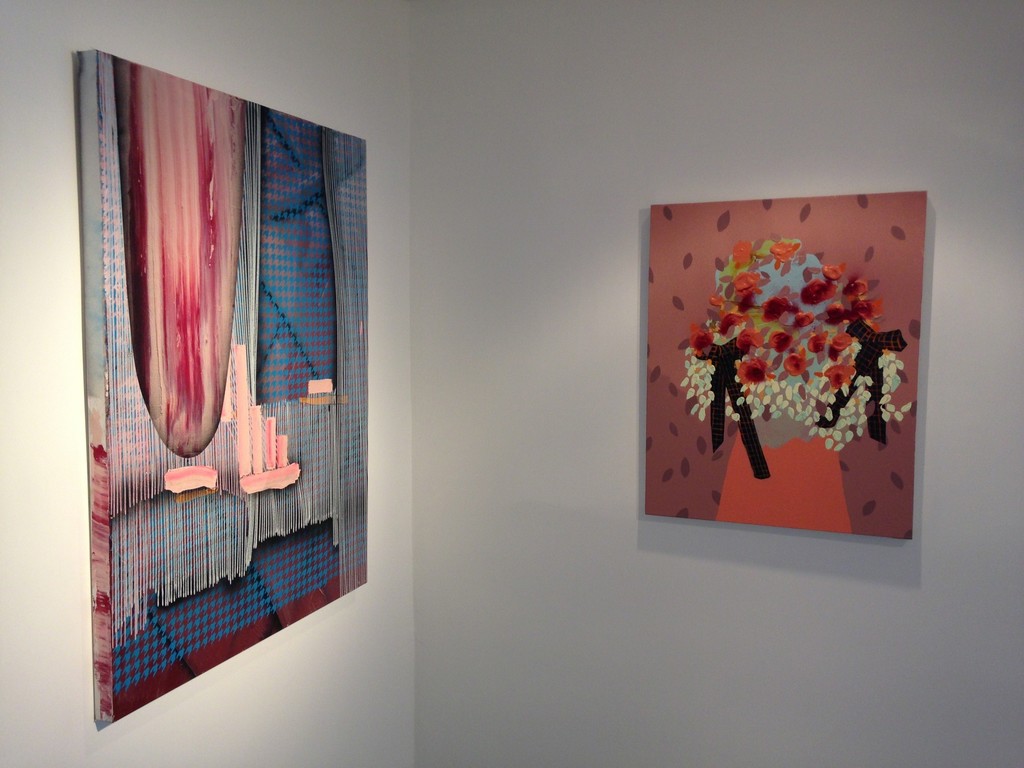 Launch LA is proud to present Velocity, a group show examining the enigmatic genre of abstract painting. Quick, shifting and transformative, abstraction features glimpses of familiar forms obscured by colorful gestures and geometric lines. At once the familiar is transformed into a new experience, a shift in perspective that requires deeper contemplation. This challenge is an invitation to the viewer to resonate on a deeper level and draw on the emotional and perceptive qualities that lie beneath the nuances of formal properties.

Philippa Blair’s visual journey is not only created by painterly gestures, but also comes from her own internal and external experiences and her intuition. As a rhythmic process, Blair begins with a geometric or gestural diagram, then builds and reveals layers. This sense of challenging the painterly structure of composition is an integral component to her work, where the gestural and active process discovers new forms rather than delineates them. “The paintings evolve and revolve around the exercising of the brain and muscle into working “walking” drawings. They come from experiences that can relate to memory.” She also sites linguistics, maps, musical scores, charts, travel and directions as stimulus.

Jenny Hager investigates ambiguous, constructed, and animated space through open, abstracted imagery to bypass or delay immediate recognition. Through process, negation, and reinterpretation, Hager composes these painted palimpsests in the service of exploring the tension between the explicable and in-explicable, whether celestial, spiritual, or the natural world. Injecting subtexts through formal elements such as pressure, design, and asymmetrical balance, Hager disrupts the viewer from set perspectives and encourages them to discover new ways of seeing.

Tim Hussey’s work can be described as ambiguous abstraction, mainly composed of frenetic forms and indiscernible space. With hints of recognizable moments pointing to a larger narrative, Hussey is more interested in reflecting the broad strokes of the human condition; why we are here, and where we are going, rather than the minutia of every day. These unanswerable questions are the undercurrent of Hussey’s gestural canvases, while the deeper intentions urge the viewer to hold steady in the belief that we can still find peace no matter what the circumstance.

Christopher Mercier redefines ‘painting’ as a sculptural experience, constructivist in its approach to break the picture plane and move into the space of the audience. Traditionally the pictorial window or picture plane has only allowed ‘Painting’ to be represented as two dimensional or as a three dimensional illusion (perspective). Mercier explores an expanded condition, repositioning the act of framing and altering the location and separation created by the picture plane. A cross between the acts of painting, sculpting and architectural modeling, ‘Painting’ now moves through the pictorial window(s) into real space, expanding the field of painting into real experiential three dimensional condition.

Bryan Ricci’s process of applying paint works as metaphor for the way memory is constructed. The bare canvas represents an actual lived experience, while each successive layer of paint represents a segment of time that has passed between the original incident and the present. As each layer of paint is applied, the original scene is more and more abstracted and distorted. The natural deterioration of memories takes its toll, and so too does the warping effect of the unconscious mind as it attempts to fill the gaps. What has come and gone does not remain static, frozen as it was at the moment that we last perceived it – our memories are moving toward an unknown future.

Ana Rodriguez draws inspiration from her native Los Angeles, from the obsession with confectionary sweets to the manufactured goods. Her radiant neons communicate a sense of irreverence, a fascination with the cloying sweetness of manufactured culture and synthetic food-stuffs dyed with artificial colors. Feeding on memories of growing up in a community hemmed in by chemical plants, factories and industrial bakeries. Rodriguez exhibit an intuitive understanding of contrast as stimuli for deep and elemental emotional resonance; the patterns and cheerful colors of prized childhood possessions also feature, mingling with brasher shades of wallpaper, fabrics and flooring.

Nano Rubio’s creative process combines tight and meticulous line drawing with action painting’s explosive energy, defacing his carefully laid backgrounds with bursts of color and smears of paint. Rubio is a keenly observant and deeply reflective artist, able to bend non-literal forms; drawing on the flesh-tones and shapes that hint to the human form, yet are distorted and disfigured into sinuous shapes. Streamlined and graphically lucid, they resemble logos designed by high-powered design studios. It is these twin impulses toward destruction and creation that Rubio harnesses, creating art as fraught with tension as it is appealing to the eye.