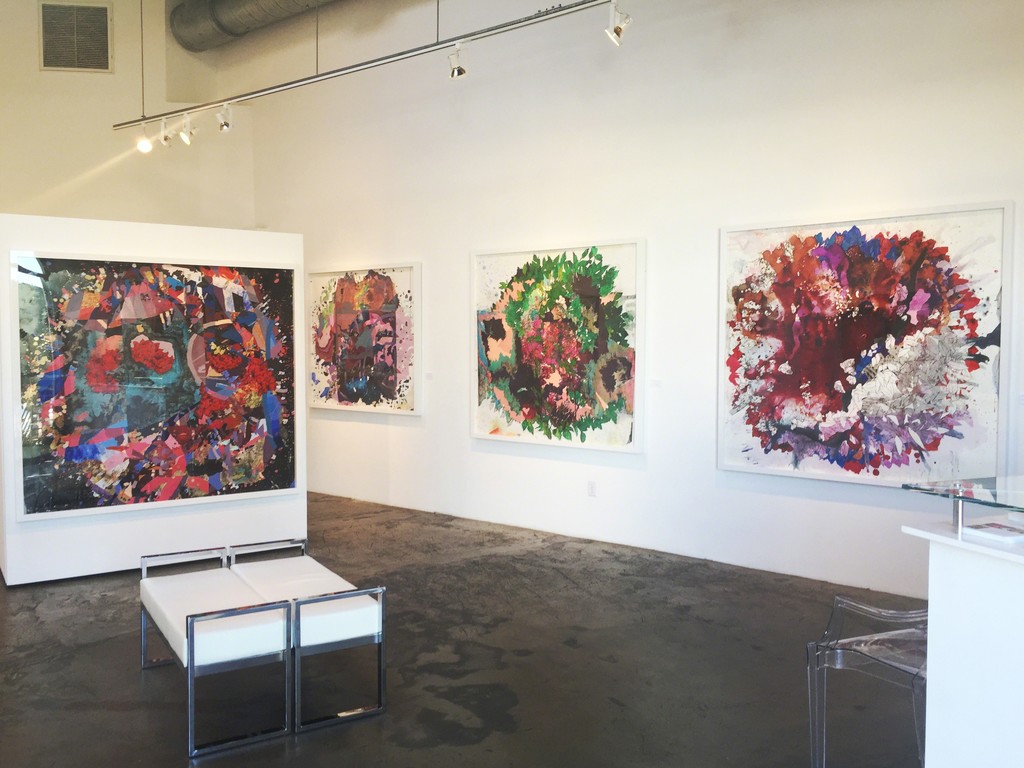 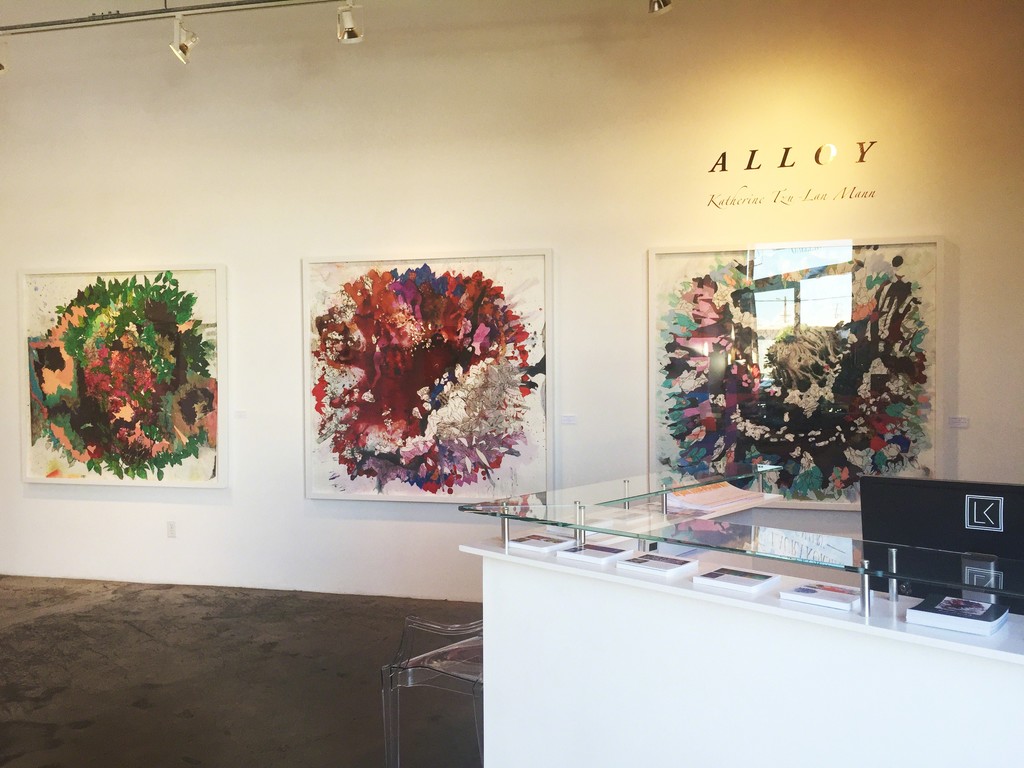 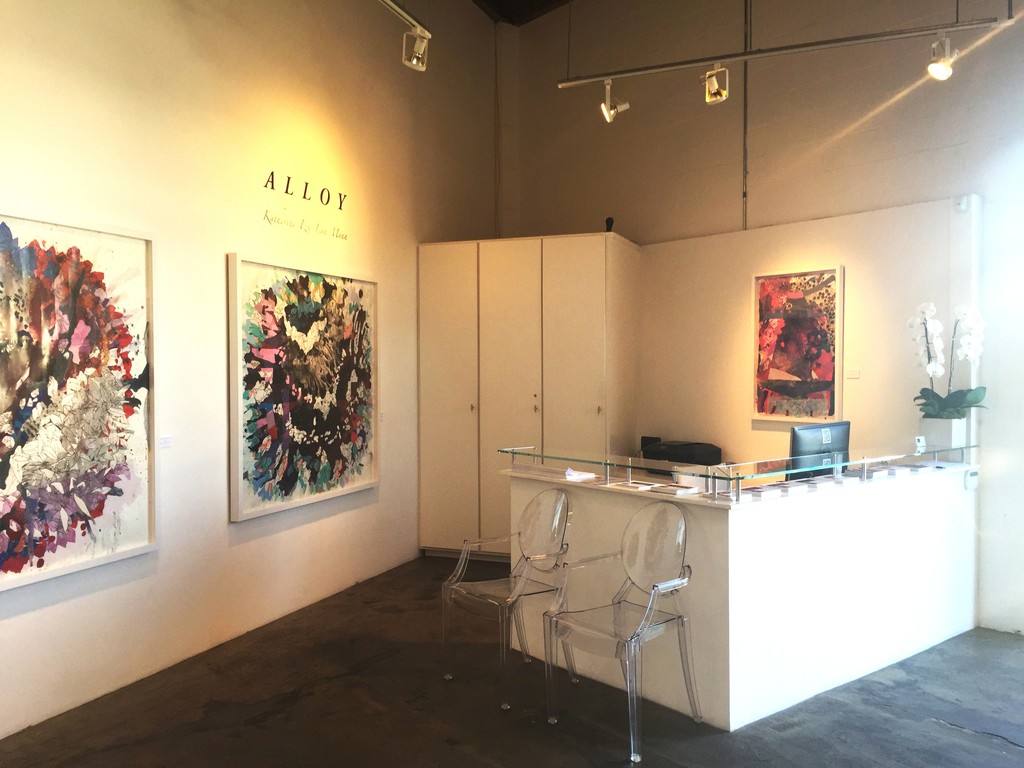 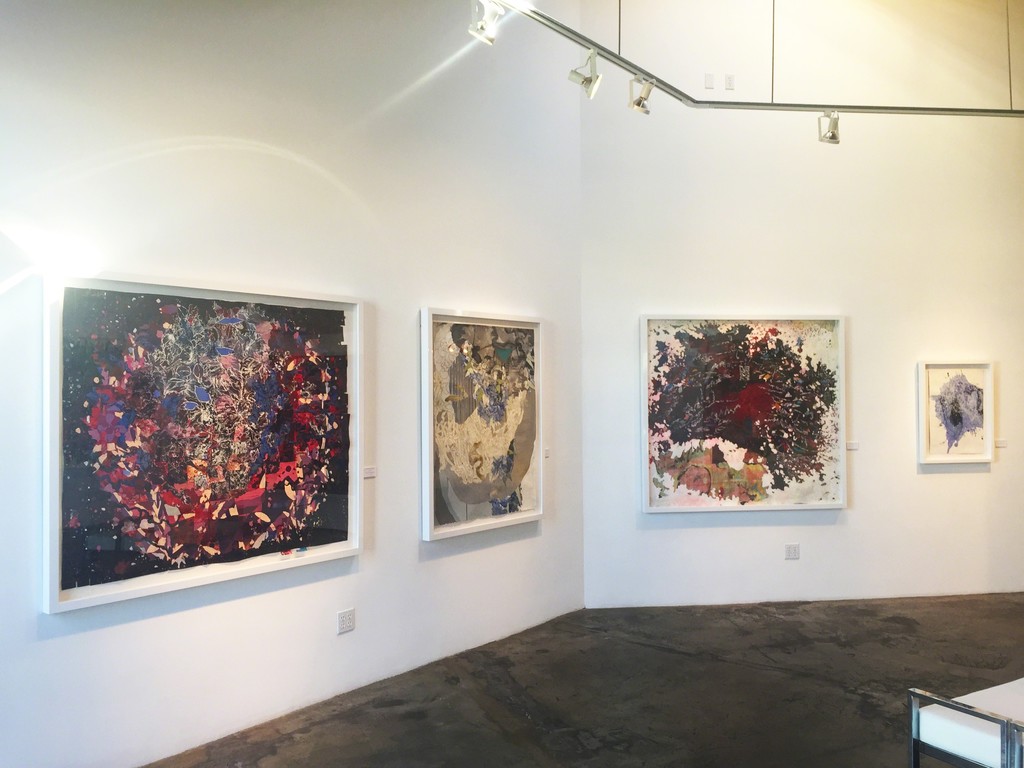 Laura Korman Gallery is pleased to present, Alloy, an exhibition of new works by Washington DC based artist, Katherine Tzu-Lan Mann. The exhibition is on view from November 1, 2016 through January 21, 2017 with a public reception on Saturday, November 5th, 6-8 p.m.

Alloys are typically defined as substances which are composed of two or more metals intimately mixed as by fusion. This notion of “intimate mixing” is key to Mann’s artistic practice. Her energetic abstractions are synthetic in nature - pulling inspiration from diverse sources, Mann skillfully mixes media and imagery not traditionally used in concert. Drawing inspiration from a recent visit to the ancient site of the Mogao Caves situated on the Dunhuang oasis on the edge of the Gobi Desert, Mann presents us with a collection of works that continue her exploration into the delicate balances between void and abundance, chaos and order, and creation and destruction.

Full of binary oppositions, Mann’s stunning paintings seem to be visual metaphors for the chaos of creation and the ever expanding nature of the universe. Beginning with ink stain on paper that she applies while the piece is laying flat on her studio floor, Mann builds upon each ground intuitively. Layer upon layer erupts over the last, oscillating between violent splashes of color and delicate, controlled linework, all of which coalesce into forms that threaten to explode off of their yupo paper grounds. Mann stealthily incorporates representational imagery into these seemingly abstract works, weaving (sometimes literally) motifs of flowers, landscapes and human adornment into brilliant fields of color.

Mann titled a number of works in this recent series after the Dunhuang region of Northern China. Home to the Mogao Caves, a complex of over 490 hand carved Buddhist cave temples situated along the Silk Road, the Dunhuang oasis became a melting pot where various disparate peoples collided and interacted for centuries. The notion of synthesis runs deep for Mann - born in Wisconsin, but raised in places as far reaching as Israel, China, Taiwan and South Korea, she credits her upbringing and biracial heritage as a driving force in her fascination with hybridization and fragmentation.

The Mogao Caves are elaborately painted, many literally from floor to ceiling (and back again), with images of the Buddha and illustrations depicting stories of his life. When visiting the caves, Mann was at once struck by the immersive nature of the imagery - figuration so prolific that it becomes abstract and decorative patterning that becomes almost narrative.

From her recent series, Dunhuang III is a prime example of Mann’s expertise at intimate mixing. A scarlet and charcoal organic form occupies the majority of the surface, surrounded by pastel ink splatters and a cloud of marbled paper - the edges of each form appear to be flaking away like the paint on an ancient decaying fresco. Meanwhile, cartographic white lines battle to rise to the surface and irregular swatches of opaque colors seem to float over all else. Unclear which came first, it seems that each element in Mann’s composition is vying for survival. Despite the struggle that these disparate elements seem to be forever bound up in, Mann manages to achieve a striking visual harmony amidst the tension. It is within this balance that lies the essential beauty of her work.

Katherine Tzu-Lan Mann received dual Bachelor of Arts degrees in Visual Art and Human Development from Brown University in 2005. She earned her Master of Fine Arts in 2009 from the Hoffberger School of Painting at the Maryland Institute College of Art. She is the recipient of a Fulbright grant and the Toby Devan Lewis fellowship, and is a fellow in the Washington, D.C. So-Ho Hamiltonian Fellows program. She has participated as an artist in residence at the Virginia Center for the Arts, Blue Sky Dayton, Vermont Studio Center, Salzburg Kunstlerhaus and Triangle Workshop residencies, and has been awarded the Anderson Art Ranch and Bemis Center residencies for 2011 and 2012. Mann is currently an instructor at the Maryland Institute College of Art.