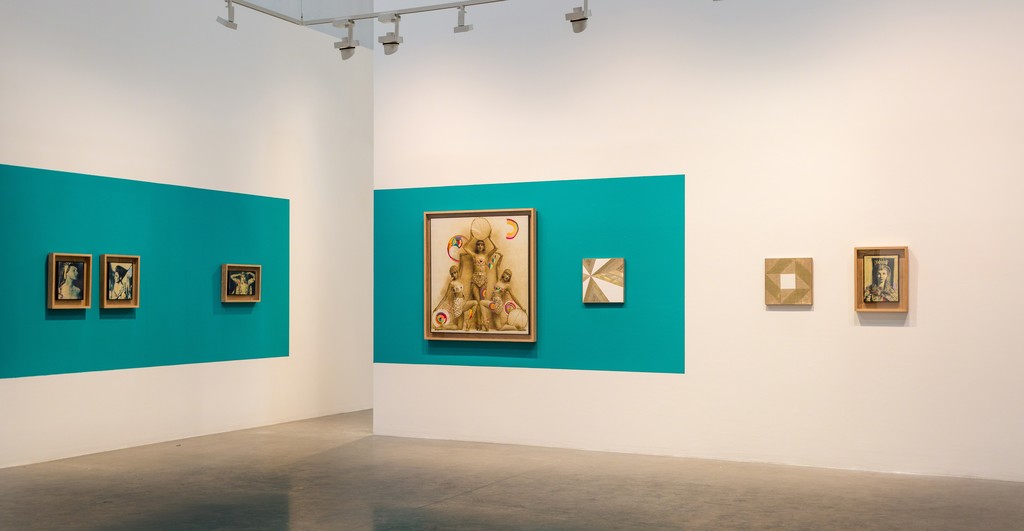 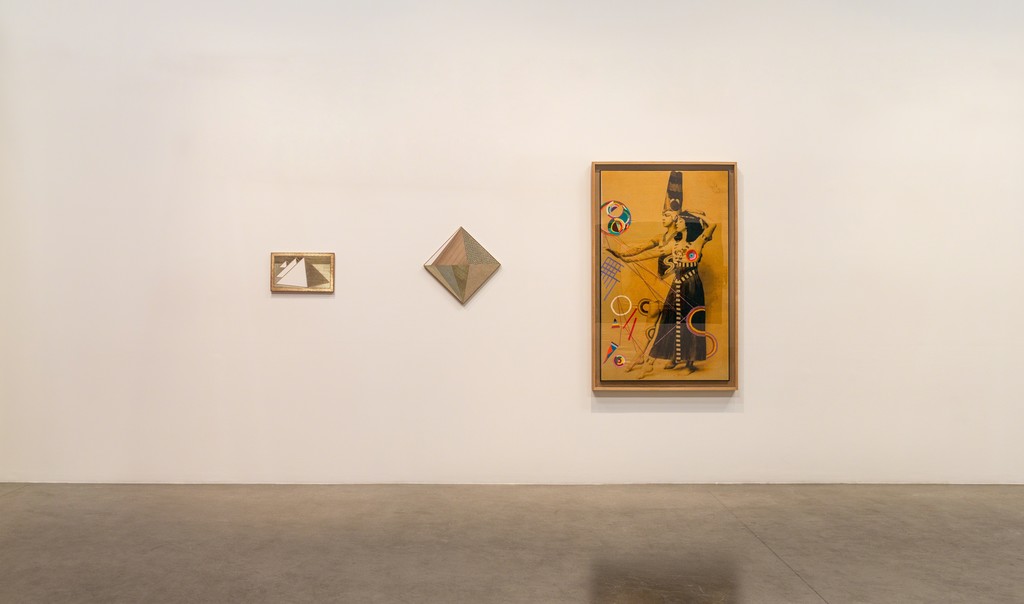 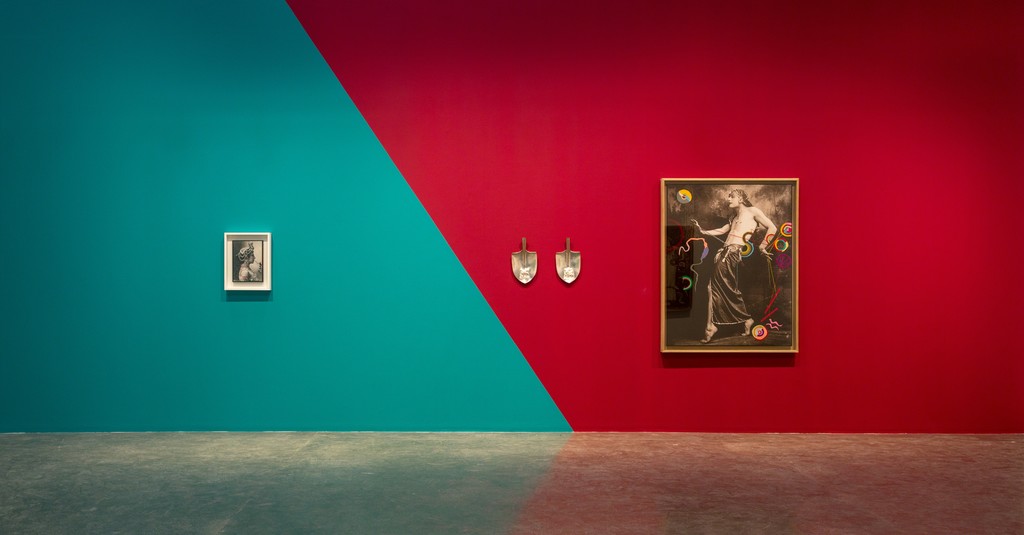 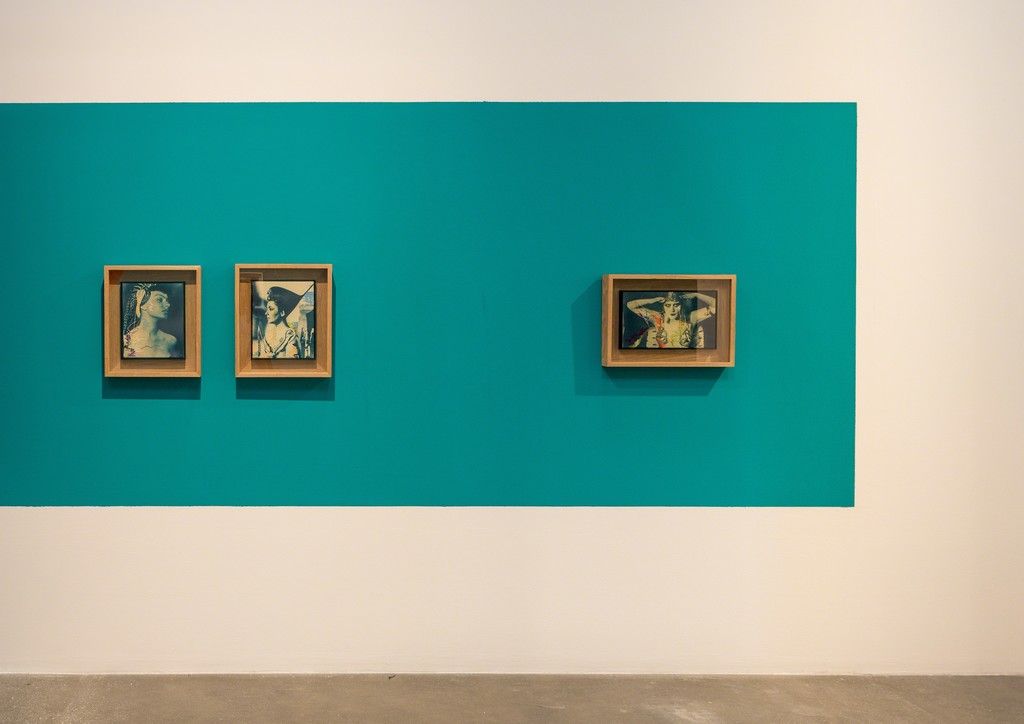 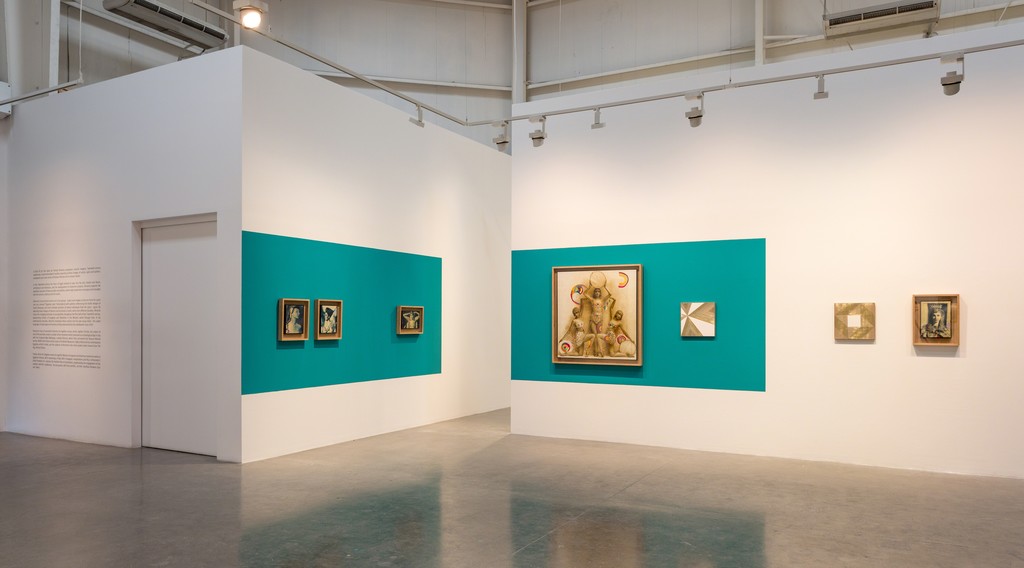 Lawrie Shabibi is proud to present A Dish Fit for the Gods by Farhad Ahrarnia, his first solo exhibition in the Middle East region. Ahrarnia’s central premise is the ambivalent engagement between West and East spanning centuries or even millennia. The fever of Egypt, Egyptology and all its findings worked its way into the arts, theatre and dance, architecture and literature, and the development of modernist projects in the Twentieth-century. Ahrarnia explores the aesthetic outcome of these parallel sensibilities, where high modernism converges and entangles with the ancient, mythical and the exotic in order to spiritually articulate itself. A Dish Fit for the Gods juxtaposes ancient imagery, Twentieth-century modernism, hand-embroidered textiles depicting archival images of actors, spies and authors, metalwork and Khatam (Persian micro-mosaic), while touching on complex themes, from modern dance to archeology, espionage to Egyptomania, with a passing nod to sexuality, identity, and the fluid values of orientalism.

The title for the exhibition is taken from a line uttered by Brutus in Shakespeare’s Julius Caesar, shortly before dispatching with Caesar.

The play is a prequel to Anthony and Cleopatra, and the symbolic figure of Cleopatra is present in each. The idea of Cleopatra fascinates Ahrarnia -imbued with political, racial and misogynistic over-tones. In A Dish Fit For The Gods Ahrarnia attempts to unpick the politics and the language used to construct her mythology.

Western interest in Egypt extends back to Hellenistic times. As an older sophisticated civilization, now under Western (in this case Ptolemaic Greek) rule, it became the prototype for notions of exoticism and orientalism. At the dawn of the modern era, Shakespeare's Anthony and Cleopatra set the tone for the next 500 years, full as it is, of amazing terminologies and ideas about human interaction - betrayal, seduction, conspiracy and exotica.

Ahrarnia’s new pictorial works are in two groups - large-scale images of dancers from the 1920s and 30s, dressed “Egyptian style”, inspired by the discovery of Tutankamun’s tomb in 1922, embroidered with patterns referencing the textile designs of Sonia Delauney, contemporary to them; and more intimate portraits of named individuals from the 1910s-1950s, including silent movie star Theda Bara, the exotic dancer, courtesan and double agent Mata Hari, author and sometime archaeologist Agatha Christie; Hollywood actresses Claudette Colbert, Elizabeth Taylor, Vivien Leigh and Sophia Loren, and one male figure, Donald Wilber, the area expert and CIA agent with a penchant for Persian rugs who masterminded the overthrow of Iranian prime minister Mossadegh in 1953. Each of these figures in a sense led duplicitous double lives, and in these images each is in costume– Egyptian or Arabic style- or at least their interpretation of it. By selecting images of dancers and actresses in exotic attire from different decades, Ahrarnia traces the changing attitudes of acceptability throughout the first half of that Twentieth century, questioning notions of progress and liberalism in the Western world through time. Through his signature use of embroidery Ahrarnia both metaphorically and literally weaves together the disparate strands into a narrative that is as rich as it is nuanced.

Ahrarnia’s love of anecdotal and interconnected histories tie together various works. Agatha Christie, the subject of one of the portraits, set many of her stories - Death on the Nile, A House in Shiraz, and Murder on the Orient Express- against Middle Eastern backdrops. These locations provided mysterious and dramatic settings for the subject of her novels and the act of writing itself. In his embroidered portraits, Ahrarnia translates these notions into his own visual idiom - the coded language of espionage and mystery writing represented by the needlework cross-stitch. Christie wrote a number of her mysteries whilst stationed on archeological digs in Iraq with her husband Max Mallowan, notably Nimrud where, after using her limited supplies of face lotion to clean the famous Nimrud ivories, she famously complained of dry skin. Motifs from these ivories (now in the British Museum), highly influenced by contemporary Egyptian artistic trends, are the subjects of his two silver-plated metal shovels from The Dig, Nimrud Series. These Egypto-Assyrian Motifs are a testimony to the influence of Egyptian Art on a vast region beyond its own localities, even in the period of 700BC. The shovels are not mere carriers of historical emblems - Ahrarnia raises the shovels to the status ritualistic objects, which embody the ghost of the specific artefacts formed on their surfaces. The shovel thus becomes a ceremonial object with the potential in future to be buried and rediscovered as an artefact, completing the circle of self-referentiality, a key aspect of modernism according to Ahrarnia.

Finally, Ahrarnia’s Khatam-based works tie together his Iranian (specifically Shirazi) origins with his exploration of Egyptology and orientalism. Stemming from the inherently constructivist and geometrically structured properties of the medium, which again Ahrarnia considers mathematically generated and self-referential in a quasi-modernistic way, akin to such qualities of the Russian Avant-Garde who greatly influenced the art and architecture of mid-twentieh century Iran. In his new series of Khatam works, Ahrarnia ties together Western European and American modernist works to Egyptian themes, with Khatam reworkings of Max Bill’s triangular compositions and Roy Lichtenstein’s Great Pyramid. Ahrarnia thereby reverses the familiar flow of orientalism, emphasizing the engagement of the modern with the traditional, the decorative with the scientific, and the interflow between East and West.