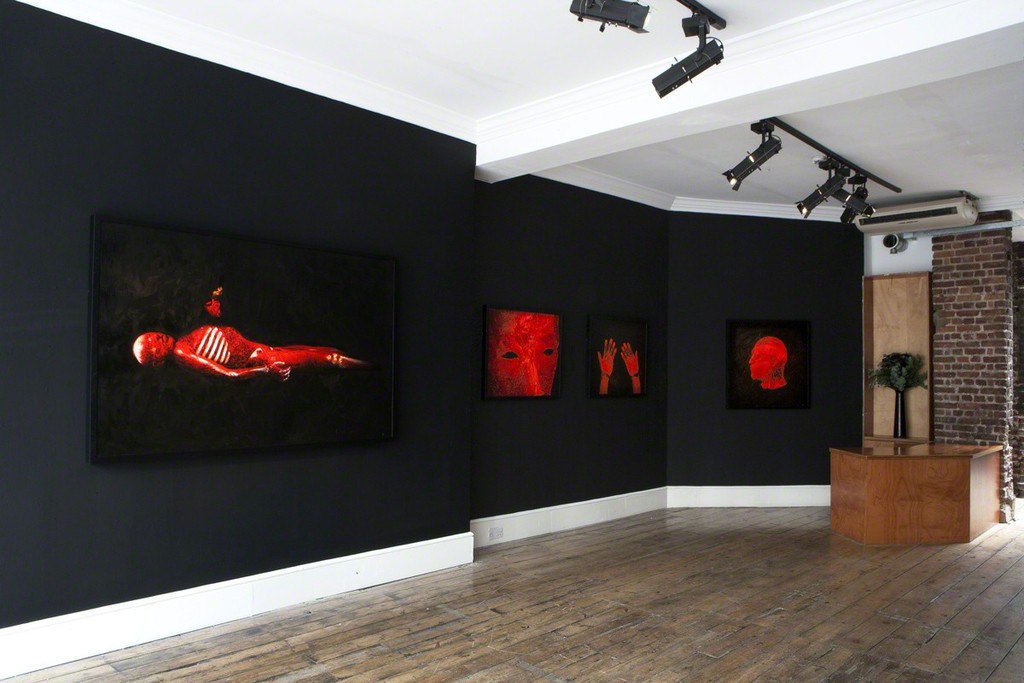 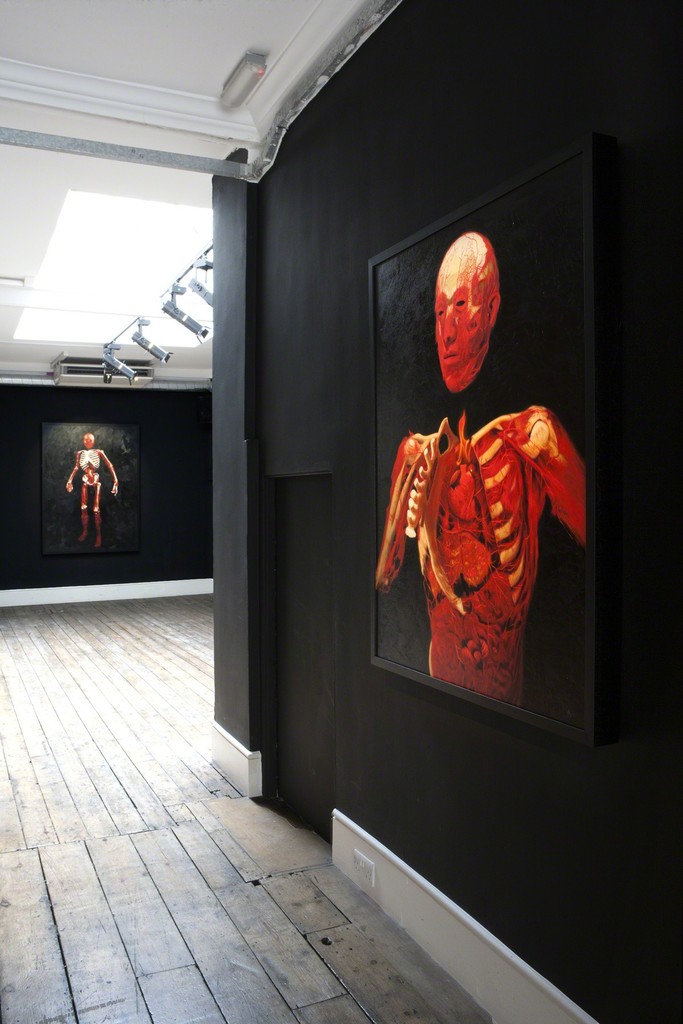 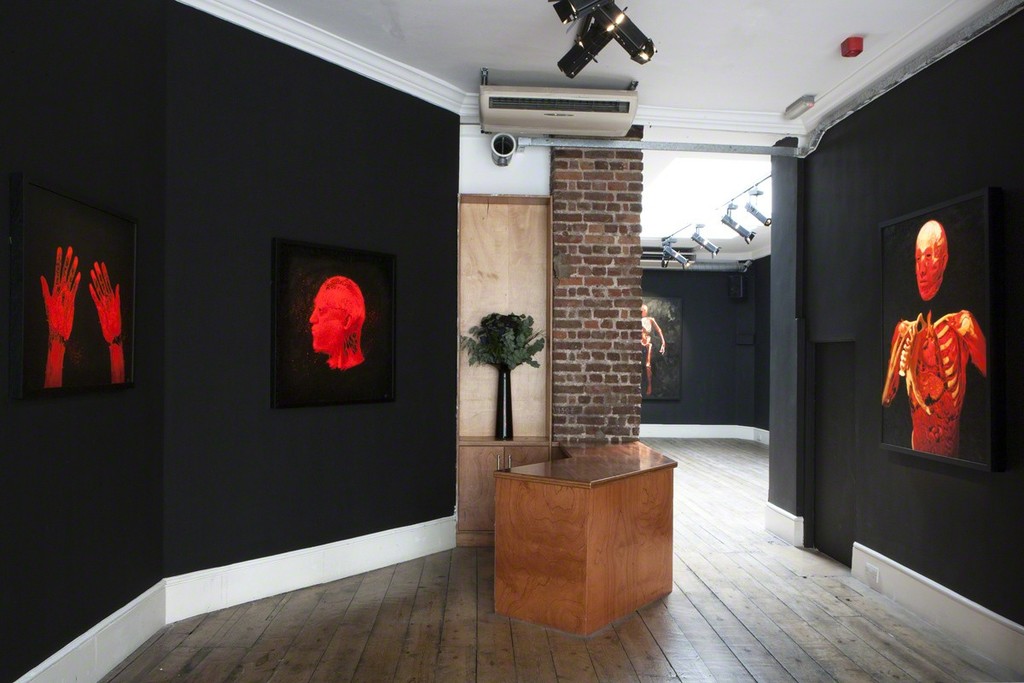 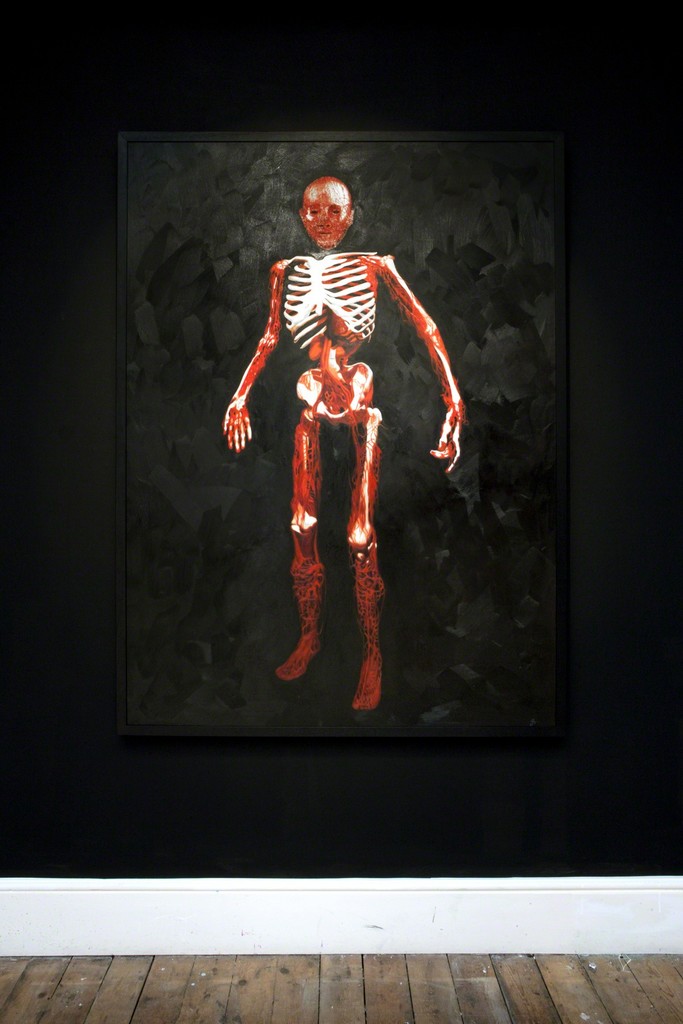 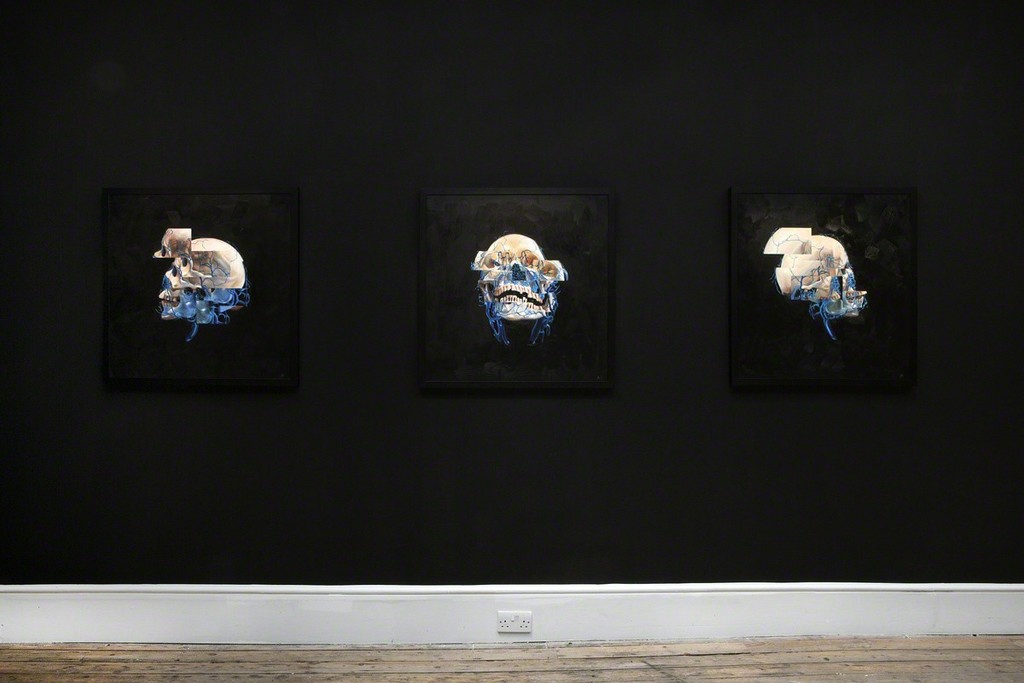 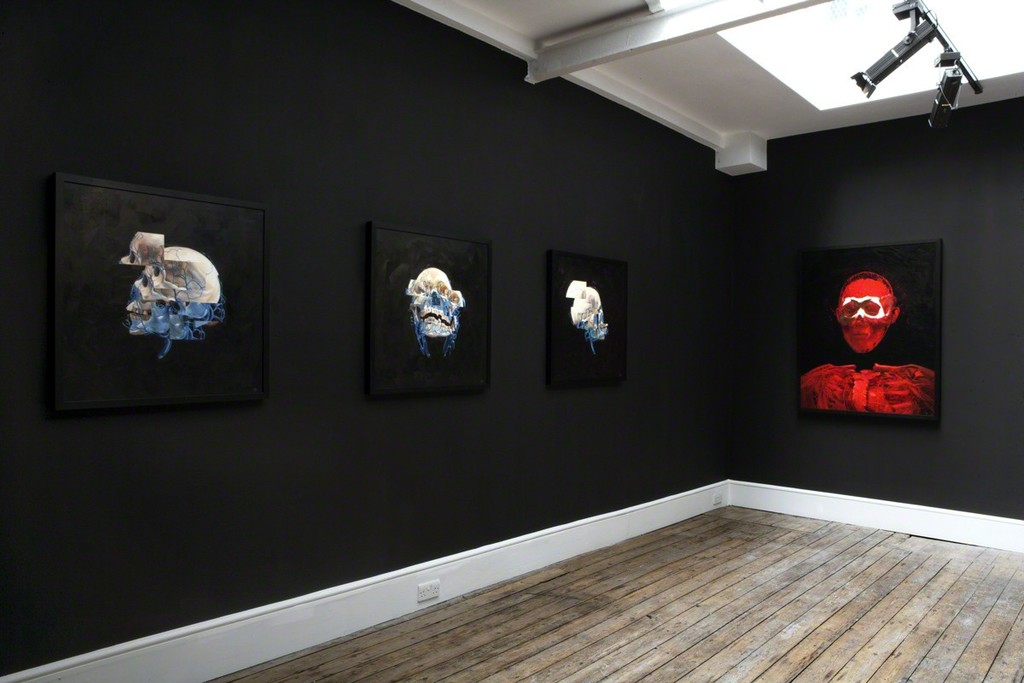 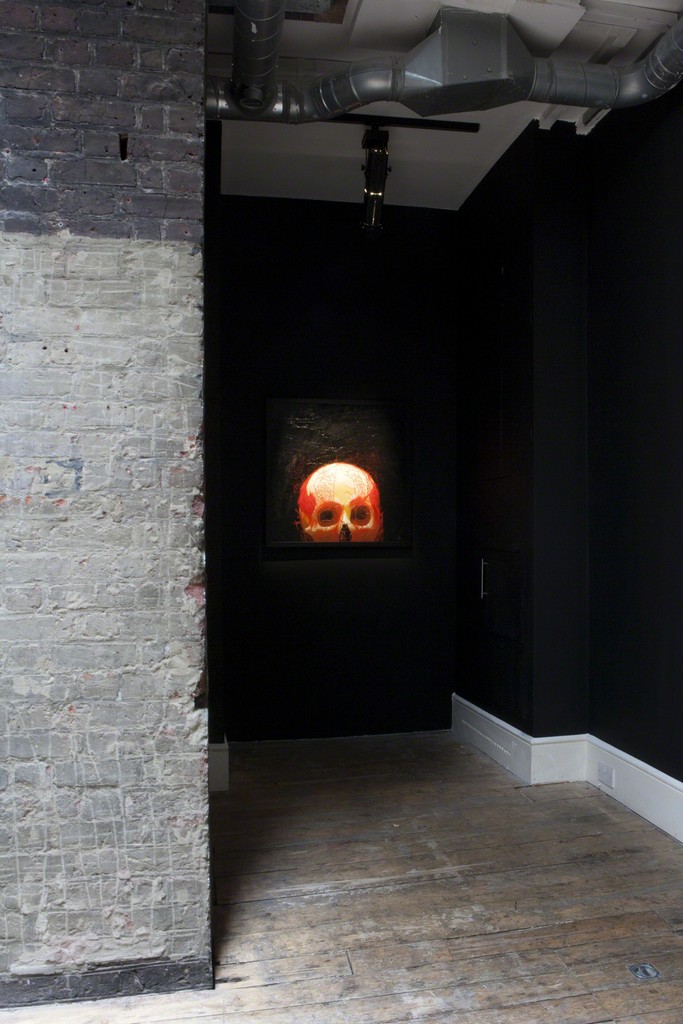 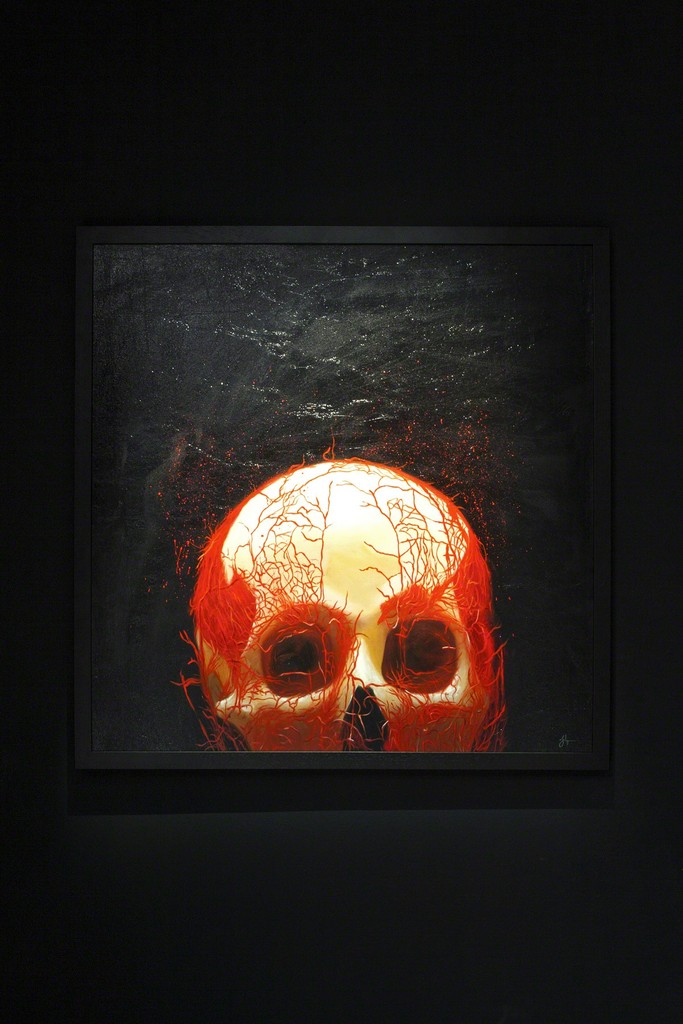 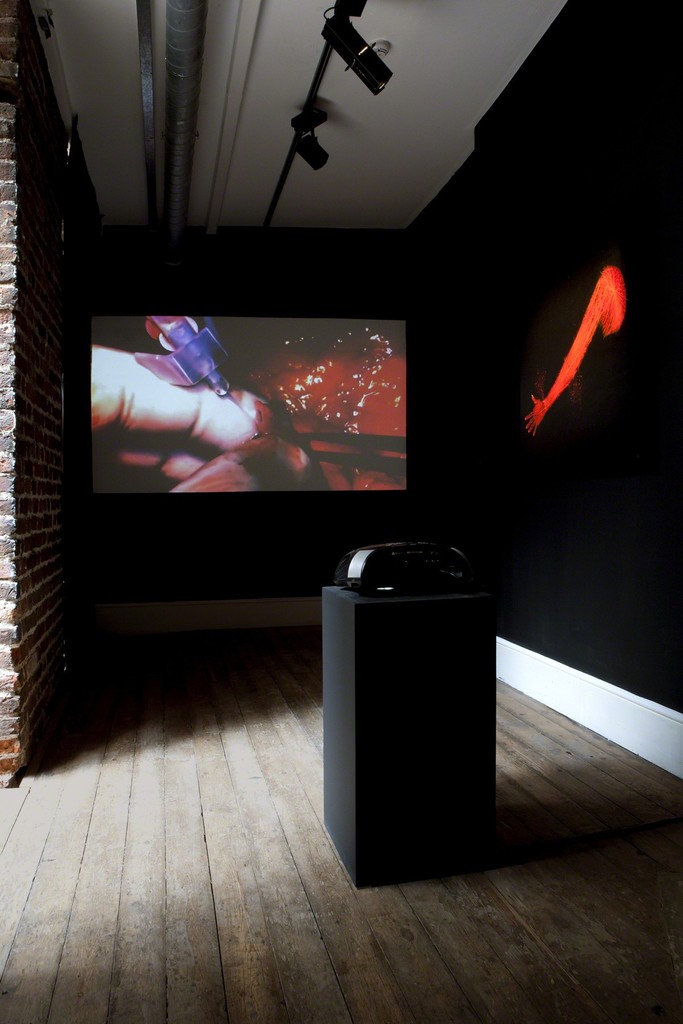 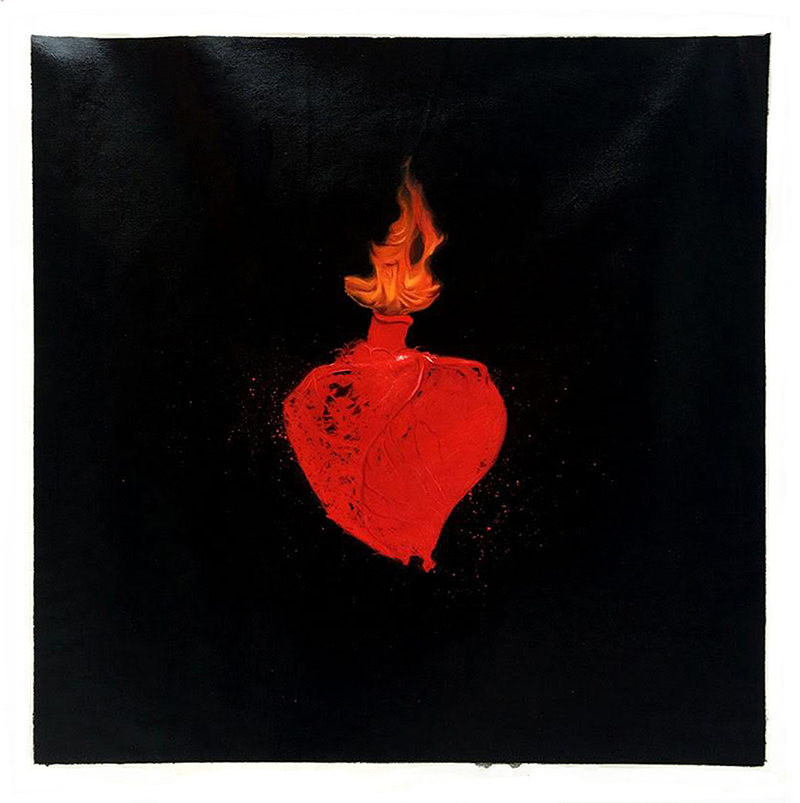 “Something started happening with age, migraines, spasms, weakened eyesight, a loss of breath is ever
more common now. This body of mine has become a personal reminder of my personal decay. In the manner
of Gunther Von Hagens, a need to dig into my flesh grew every day, I needed to play inside this intricate
machine, to view its absolute delicacy and grotesque detail: our bodies, the physical representations of
movement, energy, life and finitude. From a young age I dreamt of becoming a surgeon, of one day being
able to manoeuvre a human body, to cut it, feel it, expose it and sow it back together. Life took its turns but
this uneasy curiosity still today remains.

· FLESH · BLOOD · SUBSTANCE · is the autopsy of my spirit, a reinterpretation of science and soul, an
exploration of our concrete presence and inevitable disintegration. This group of work is the fragmentation
of my personal approach towards the reasons behind the malady of aging, changing and existing as
substance. Oils, red and blues took the place of scalpels; with them I glanced into the viscera of the
corporal and the essence behind the fluidity of extinguishing vitality. Here lies what I feel and perceive as
the vacuum of ever changing life and intrinsic end.”

Andreas Hijar lives behind a mask and through the spectacles of his art. Born in 1982, the artist and
illustrator who currently goes by the alias of “Golgo” was born in Mexico City amidst Mexican popular
folkore, punk music and animated cartoons. A collector of imagery, as a self-taught artist he developed a
singular style, his influences: a mixture of academic classical art, comic books and futuristic tendencies.
His work inhabits a spectrum of reality not lived yet, a fantasy where life and death are presented as
instants of a time that may or may have not existed.
Hijar has a strong connection to his roots, beginning with the admiration towards Mexican wrestlers, a
fascination from where the infamous mask that veils his identity came along. An anonymity that has been
kept since the late 90s through his first independent artistic project “Da Flow Team”, where he used the
alias “Xghettosixsixsix”, and has now transitioned into his present phase. Graffiti became a common
place; he wanted to explore the ambits of the concept of glorification, the obscure and the divine.
Hijar is currently travelling nomadically around the world and has set an extension to Black Blood Studio
in the US, the space he works from, originally founded in Mexico City. He surrounds himself with the
specific symbols, colors and objects that transmute into his paintings, graphics and alternate design
work. Always with a hint of the metaphysical, hope, amazement; creations based around characters and
themes that surface from distress into a limbo, seemingly catching the tragic beauty of a last breath.
As an extension to his formal artistic self, Hijar has combined forces with numerous brands and
companies, all the way from graphic design to artistic direction. As to work with fellow artists he has
collaborated with names like Futura 2000, Ssur, Stash, Claw$, SBTG, Respeto Total and Dr. Hoffman.
His collaborations in apparel (clothing, accessories, shoes) and toys include Nike, Reebok, Kangol,
Futura Laboratories, Ssur, Black Scale, Adfunture, Toy2r as well as producing artwork for The Bruce Lee
Foundation, Mil Mascaras State, Konami and Adidas, to name a few.