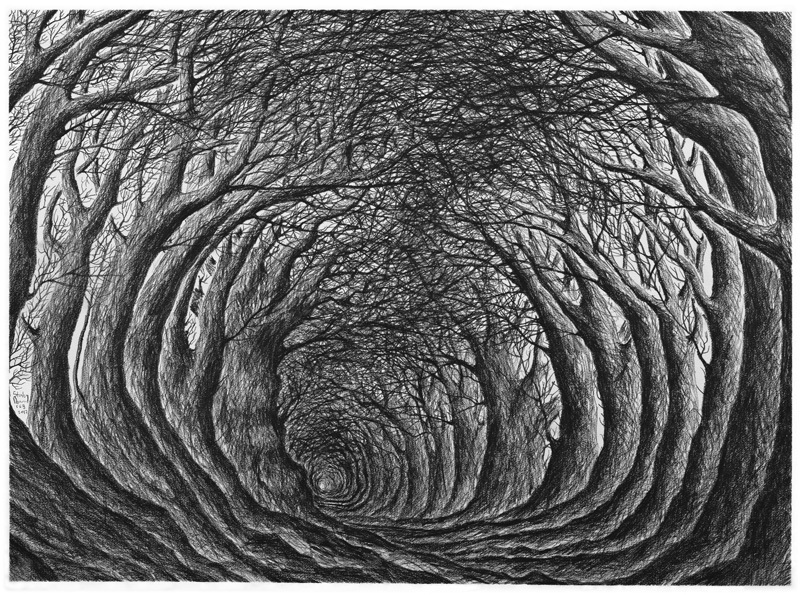 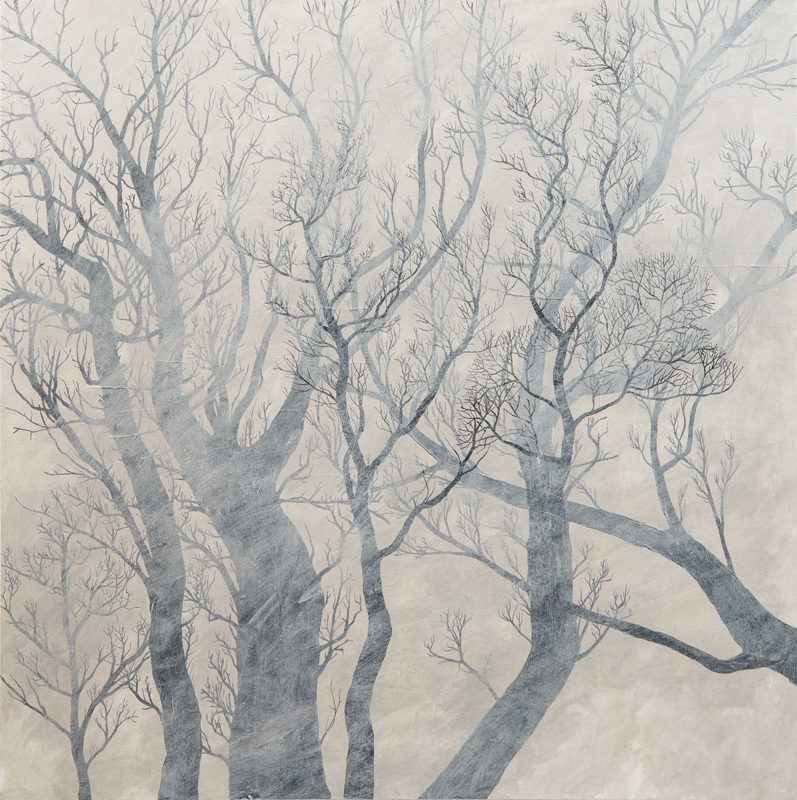 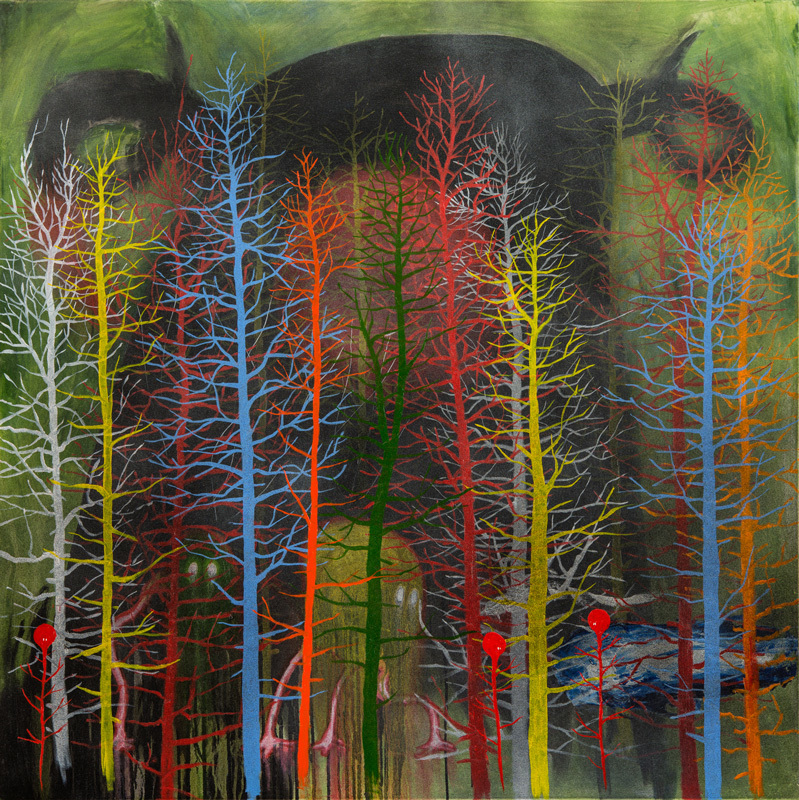 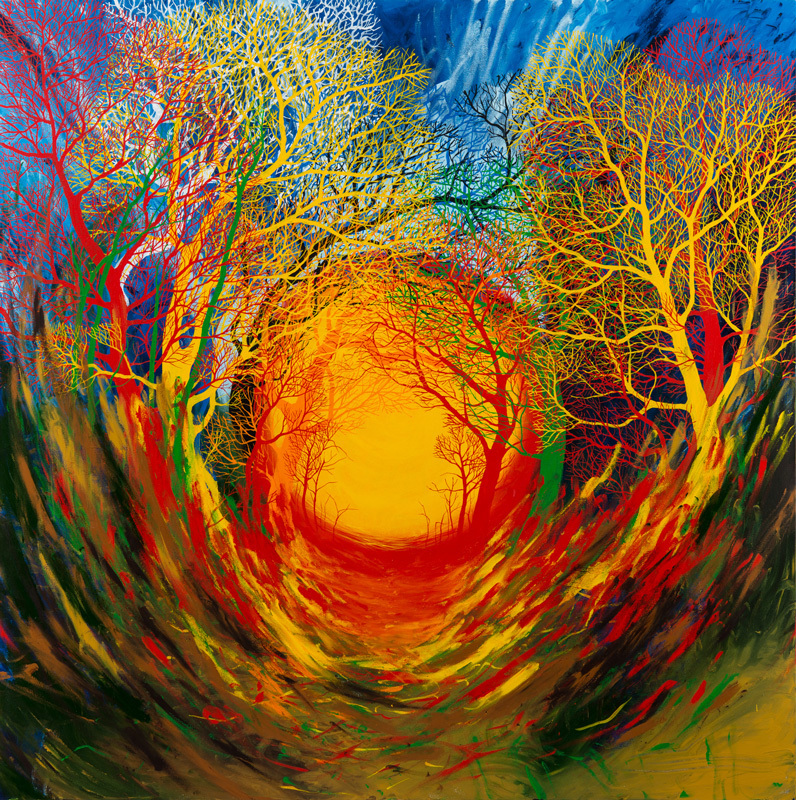 Radiohead’s in-house artist Stanley Donwood returns to The Outsiders London with a haunting and hugely appealing exhibition of artworks in September 2013.

Far Away is Close at Hand in Images of Elsewhere showcases Stanley’s ambitious ink and pencil pieces featuring hidden country footpaths, Known as Holloways, and other arboreal scenes. These are featured in Stanley’s hit book of the same name, published by Faber and Faber earlier this year. The large canvases to be shown alongside them formed the official artwork for Radiohead’s latest LP, The King of Limbs, named after an ancient oak tree in Savernake Forest, Wiltshire.

Holloway lanes are characterised by an over-arching avenue of fauna that creates a natural tunnel effect. Mysterious and melancholic, their botanical beauty inspires both awe and a liberating sense of feral mindfulness. Stanley’s artworks depicting holloways on display will range from miniature woodcut prints and studies to large works on paper. The King of Limbs canvases were created using oils and spray paint.

“In the lead up to making these pieces I became fascinated with the idea of a cathedral of sound,” says the artist, “I was working with Radiohead on the record that was to become The King of Limbs, and my early hearings of the music seemed to suggest an overarching canopy of detail.”

The band’s ambitious compositions triggered a synaesthetic vision in Stanley. “I had a kind of memory that the fluted columns and ceiling tracery of medieval churches owed its inspiration to the northern forests of Europe; the tall tree trunks, the interlaced branches above, the majesty of the woods. I wanted to take this caged spirit of the trees back into the forests, where sounds were free and un-tethered by religion, where the spreading branches supported the sky, not the roof of a church. I began to paint trees, bright, coloured trees, through which dark mists could percolate.”

Around the same time Stanley began work on the Holloways book. His research even included sleeping overnight under some of the cabalistic canopies in south Dorset, UK. “I began to draw the holloways from
memory,” he reports, “any preparations would wreck the impression that time spent in these dark, damp places left.”

The resulting works form the exhibition: they are made all the more eerie by the fact the holloways pictured have now been cut down. This in turn reminded Stanley of a famous piece of graffiti daubed on the south wall
encasing the tracks out of Paddington railway station. The lyric “Far away is close at hand in images of
elsewhere” originally appeared in 1979, but disappeared when the wall was mostly demolished in 1980 leaving
only the word “where”. In 1999 it re-appeared, but new building in 2000 eliminated the slogan once again. It’s mostly taken from the poem A Song for Contrariety by Robert Graves, perhaps best known for his TV-adapted novel, I, Claudius. But the last four words are an improvised addition. “There’s nothing left of it now – like the holloway it’s entirely disappeared,” muses Stanley. But his lucid impressions of the Holloways remain, and will enrapture visitors to this unique and poignant exhibition.