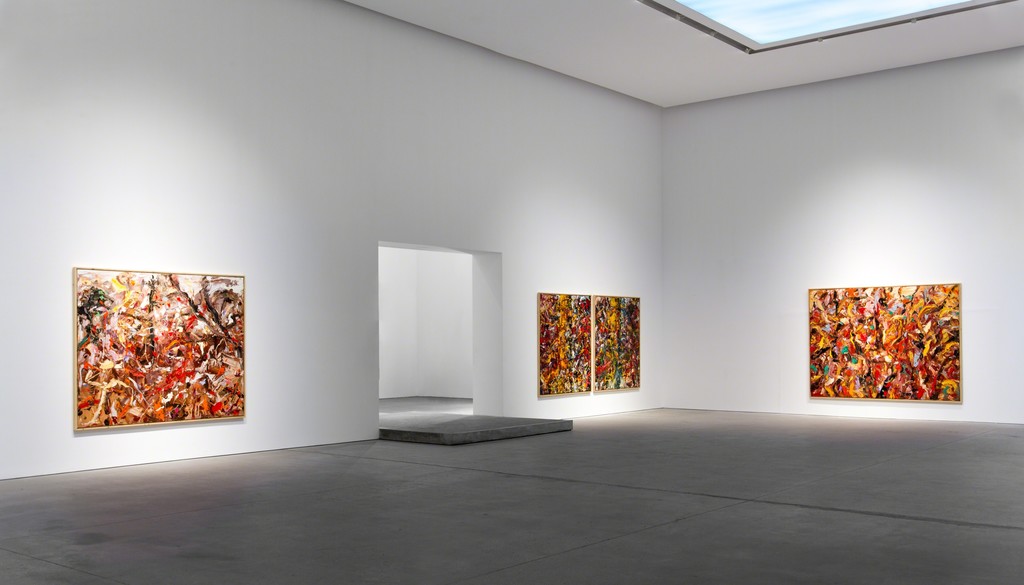 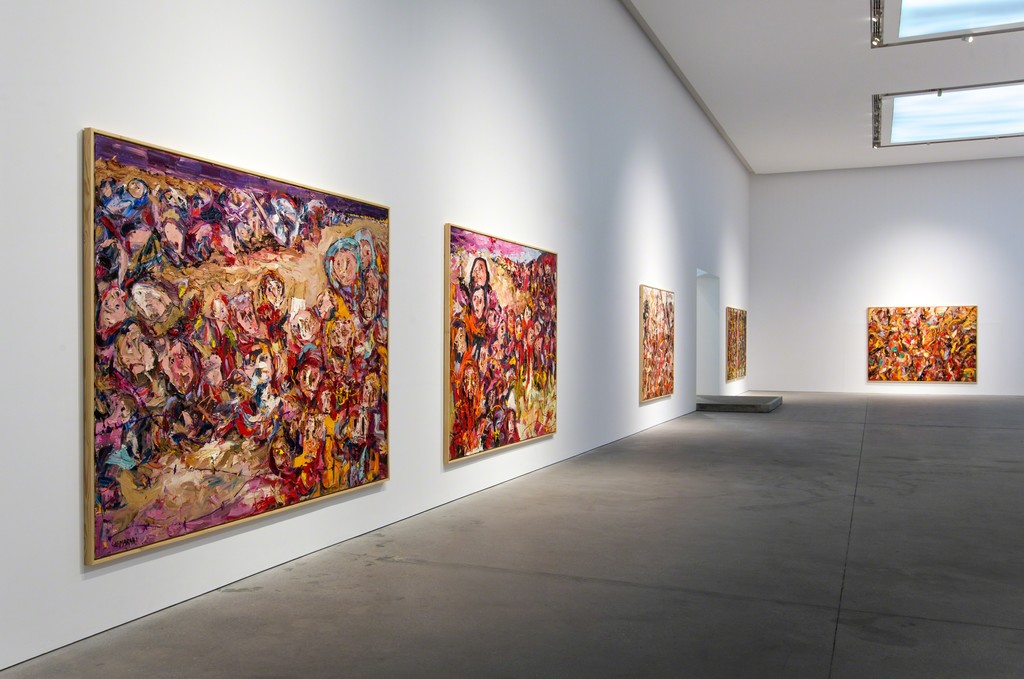 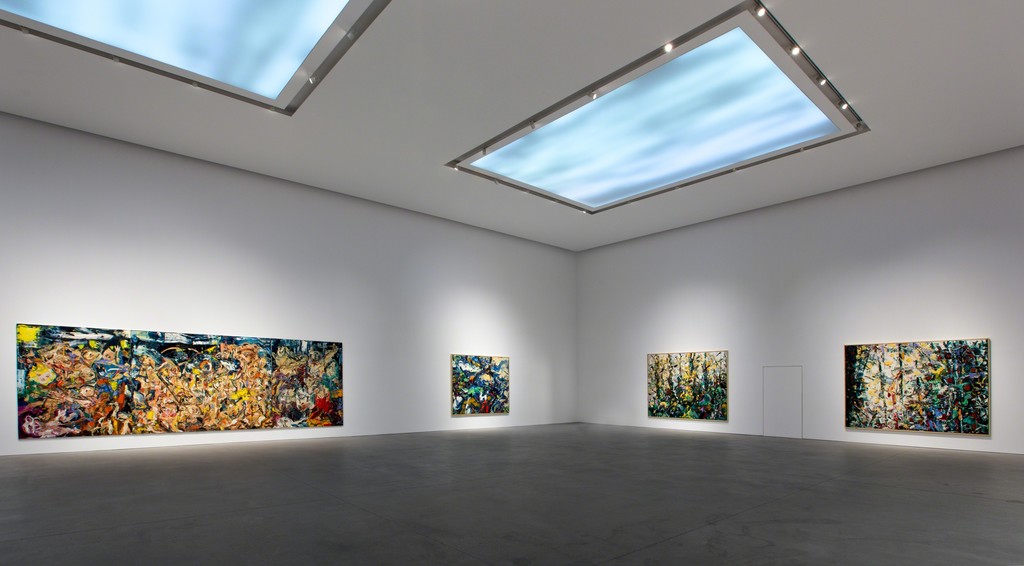 Vitality and spontaneity arise from Marwan Sahmarani’s engagement with the act of painting, from his expressive use of colour and his use of gestural abstraction to his use of perspective to illustrate figuration. His preferred subject matter reflects his lived experience including the day-to-day politics of Lebanon, the landscapes of Spain, and events of our contemporary moment. Exploring violence is particularly significant for Sahmarani: he attempts to situate the violence he has grown up with as well as the violence now seen daily on television news and in popular culture within the context of traditional representations of violence in art history. Through this exploration, Sahmarani searches for a root, an impulse, or even a motivation for this action. Yet he also gives a voice to those who have been born and raised in an environment of perpetual warfare, speaking to the destructive psychic and physical tolls. Contemporary events like this from everyday life have always been a driving force of Sahmarani’s practice, and they continue to provoke the artist to address the socio-political reality of the here and now.

Sahmarani first came to international prominence in 2010 winning the Abraaj Capital Prize for his monumental installation Feast of the Damned (2010), a work that integrated large-scale painting, drawing, ceramics, and film. It was a powerfully immersive experience with a cascade of tumbling humanity showcasing the pain and suffering of violent conflict inspired by European masterpieces and contemporary political events in the Middle East. The work draws on Ruben’s Fall of the Damned (1620), which depicts the descent to Hell at the final judgment with the voluptuous fleshy bodies of sinners whirling in a tornado of motion as they meet their end. Sahmarani’s practice has continually sought to make these connections, to link the past with the present and to demonstrate how the specifics within his environment touch on universal themes, while also showing how notions of evil, violence, and political agendas have distinct traditions.

Since then, oil painting on canvas has become a newly appreciated medium for Sahmarani and he has been fully committed to exploring its potential on canvas. There continue to be strong ties with art historical movements, but their catalyst can be found in a seemingly unlikely place for an artist from Beirut: nature. The first time he was alone in a forest in Spain, he was terrified by the solitude, by the quiet, by the stillness. Surmounting this fear has led to a change in his artistic practice. Sahmarani has said, “It helped me to liberate myself from trying to focus on an idea. Instead, I had to look and see.” He began to work en plein air, always referencing elements from a real and specific space and concentrating on transcribing what he saw in the moment, and then returned to see this blossom in his studio either in Spain or in Beirut.

What has persisted in Sahmarani’s practice is this expressive exploration of violence – of feeling, bodily motion, nature, and human beings. The conflict between inner and outer is central, but the real crux of his inquiry is deceivingly simple: how two people can arrive at a point where they attempt to destroy each other. This appetite for destruction spans human history, and it is our failure to transcend this annihilating force that continues to haunt Sahmarani. In more recent works, he attempts to interrogate this failure, while also endeavouring to explore the raw emotions at the heart of violence.

When Sahmarani captures a memory of the Spanish landscape awash with life and dissolving into symphonies of colour, what emerges from the landscape is the connection between violence and expressivity: how the brutality of nature shows a primal energy of the elements, the works are records of a violent encounter, especially when compared to its man-made counterpart. Looser brush strokes capture the exuberance, vitality and force of nature and produce expressive abstract landscapes with thick lines of paint and bold colours. This transition in practice, which Sahmarani finds more personal and more intense, has kindled a focus on the act of painting itself, leading to what he described as a “fleshy” use of thick layers of paint to depict an interplay of gesture, movement, texture, and colour evoking the collective unconsciousness.

In an attempt to access emotions as raw and dynamic as the acts of violence what often get depicted is a record of man-made violence on a large-scale, using a vigorous gestural style of movement. Sahmarani’s figurative work deliberately avoids specificity with respect to location, suggesting the sheer chaos of conflicting ideologies leading to this moment and raising the question of social action whatever our subject position and location. And yet these works often reference Syrian refugees, in particular, but moreover the general dislocations of people around the world. In this encounter between the specific and the general, Sahmarani raises the question of ethical responsibility in the implicit hail from the distressed (whether a whole people or an individual). His intervention, then, in the conflict between two that always ends in the annihilation of one, is the communication between flesh and flesh, between subject and viewer. This communication, grounded not in words but in emotional gestures, does not offer a resolution to the complexities of socio-political strife. It does, however, promise a beginning.

About the Artist:
Marwan Sahmarani was born in Beirut in 1970 and graduated from the Atelier Met de Penninghen in Paris, France in 1989. He is based between Beirut and Spain. Sahmarani has participated in a variety of solo exhibitions in the UK, UAE, Canada and Lebanon as well as group exhibitions in Germany, USA and Mexico. He participated in prestigious group museum exhibitions including “Told/ Untold / Retold” at the Arab Museum of Modern Art, Doha, Qatar in 2010 and The Feast of the Damned at the Museum of Art & Design, New York, USA in 2010. Sahmarani was also one of three recipients of the prestigious Abraaj Capital Art Prize in 2010.

Sahmarani’s practice reflects on the increasing political turmoil and tension felt throughout his native Lebanon. He explores the cyclical patterns of violent history manifesting throughout the Middle East so that what persists in his practice is an expressive exploration of violence.This appetite for destruction spans human history, and it is our failure to transcend this annihilating force that continues to haunt Sahmarani. His works attempt to interrogate this failure, while also endeavoring to explore the raw emotions at the heart of violence. In his landscape paintings created in the mountain village of Tarbena Spain, looser brush strokes dissolve into symphonies of colour in order to the capture the exuberance within nature. This transition in location, from urban to rural, has transformed his work and has prompted a focus on the act of painting itself. What emerges from the landscape work in this context is the connection between violence and expressivity: how the brutality of nature shows a primal energy of the elements, especially when compared to its man-made counterpart.