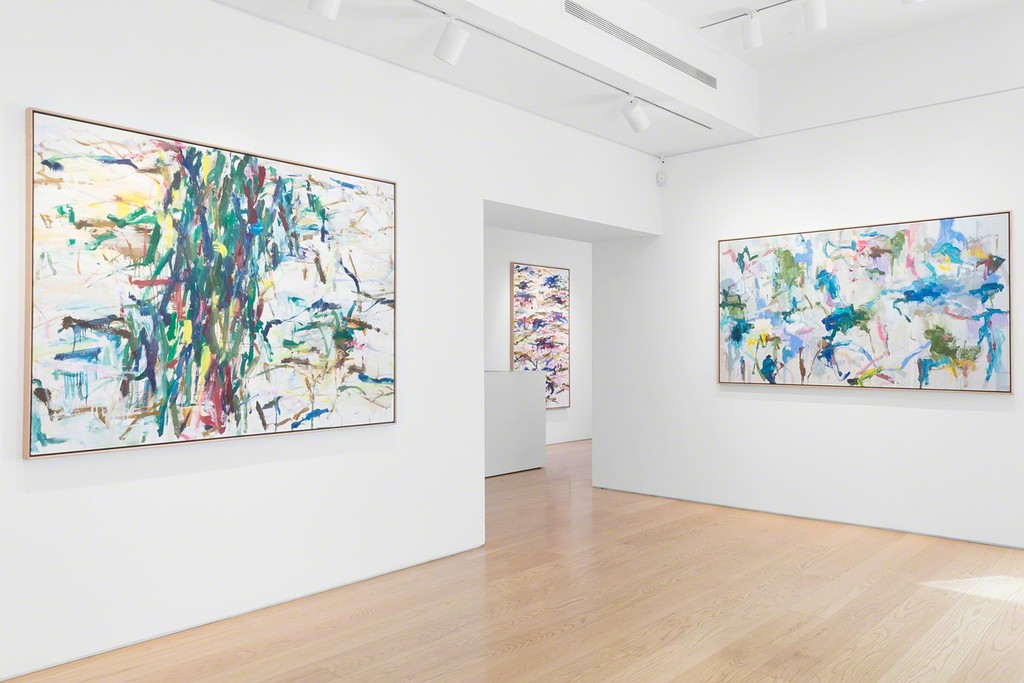 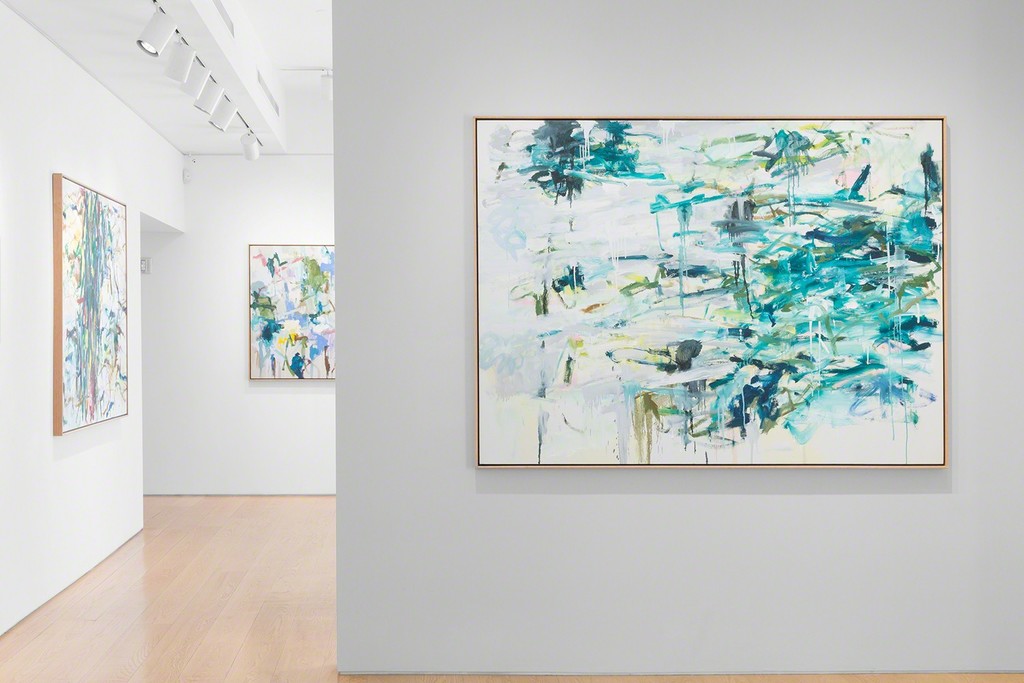 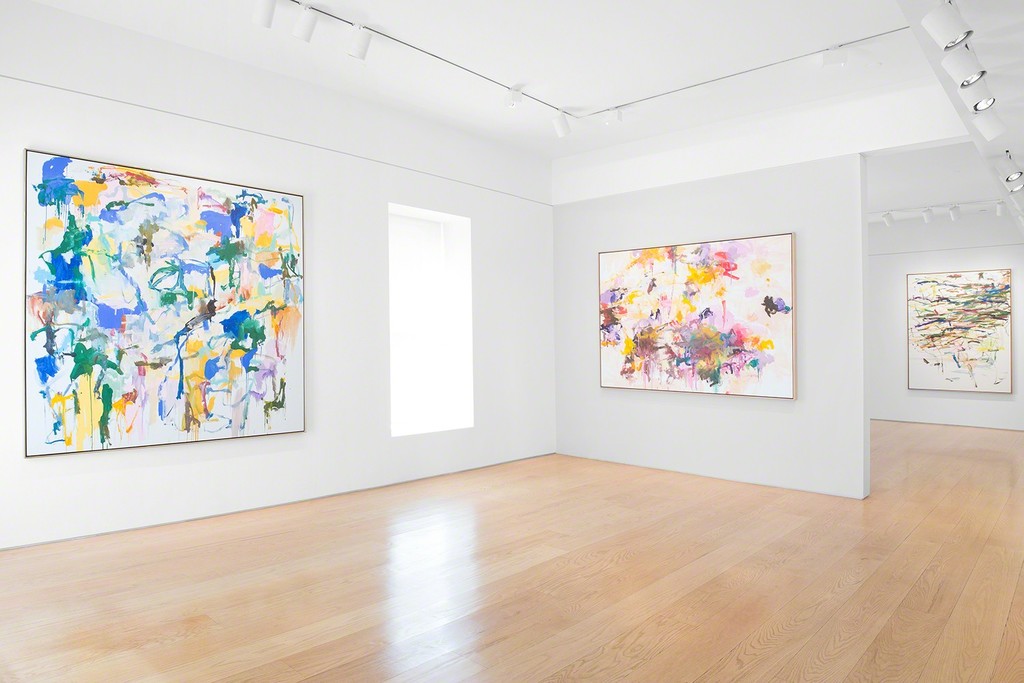 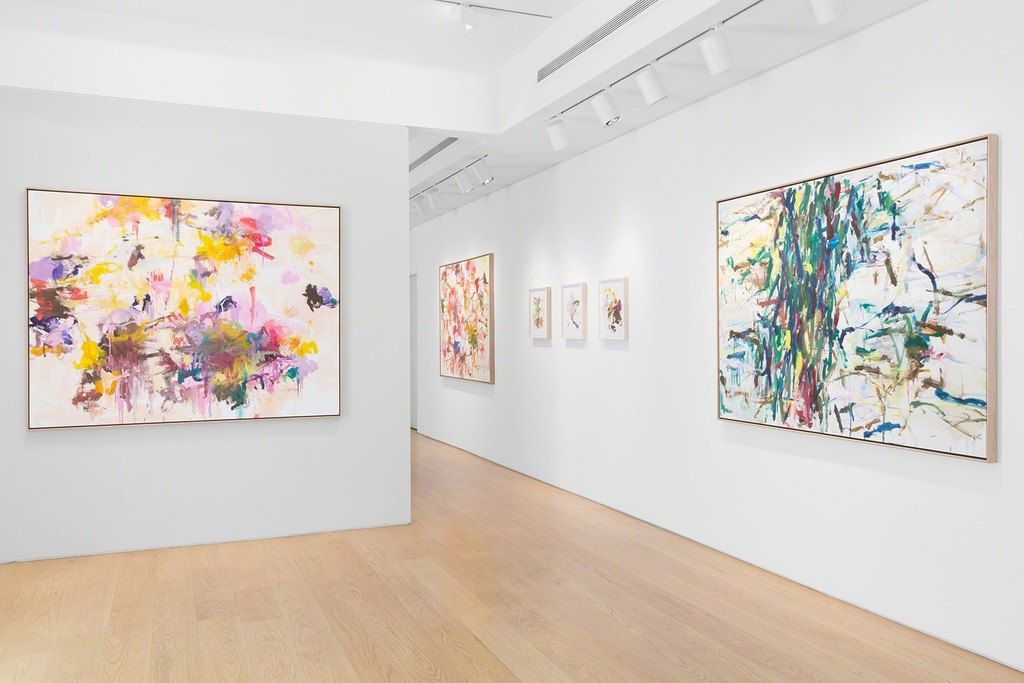 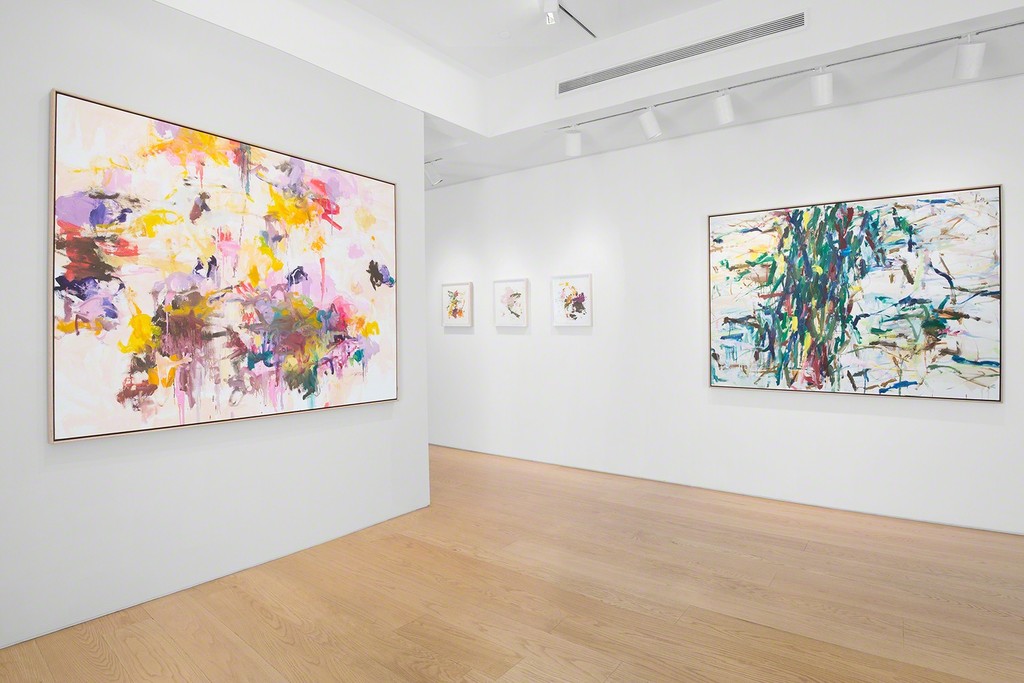 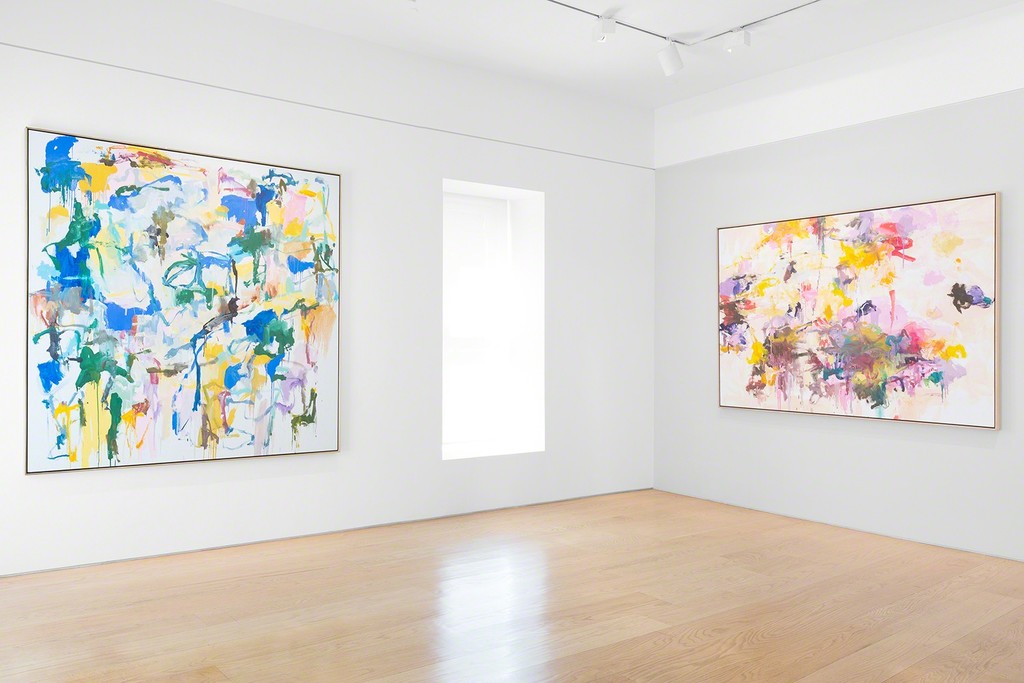 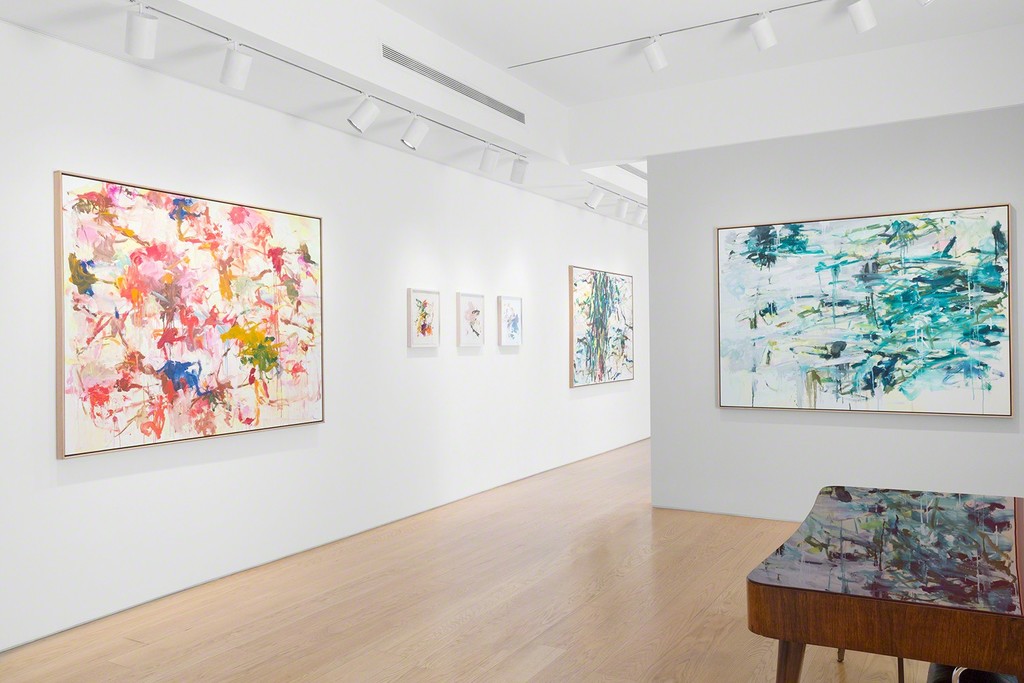 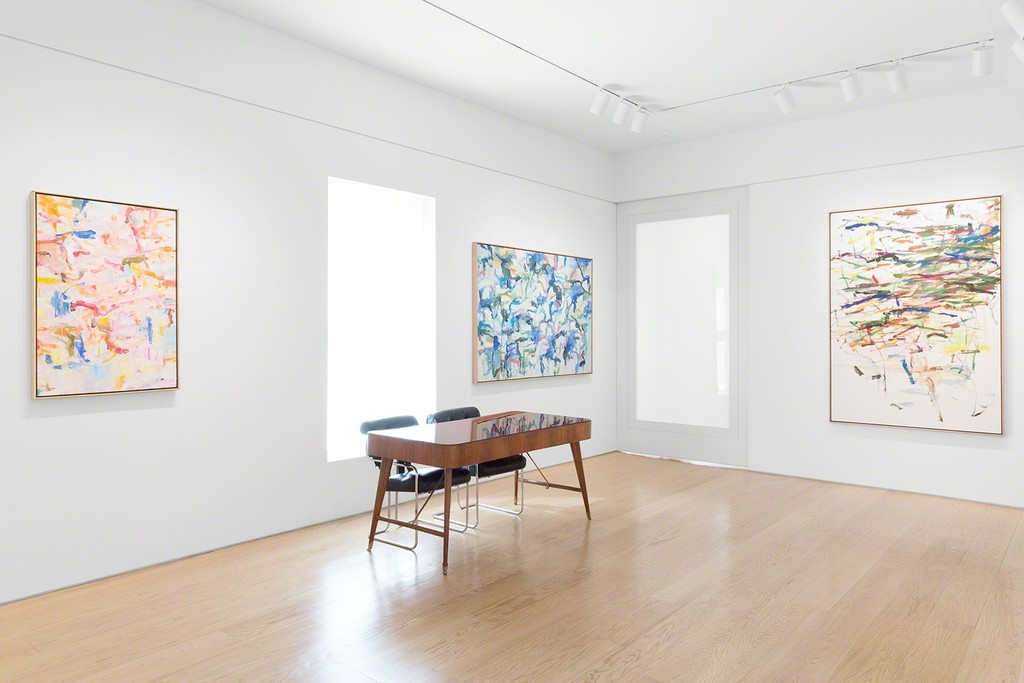 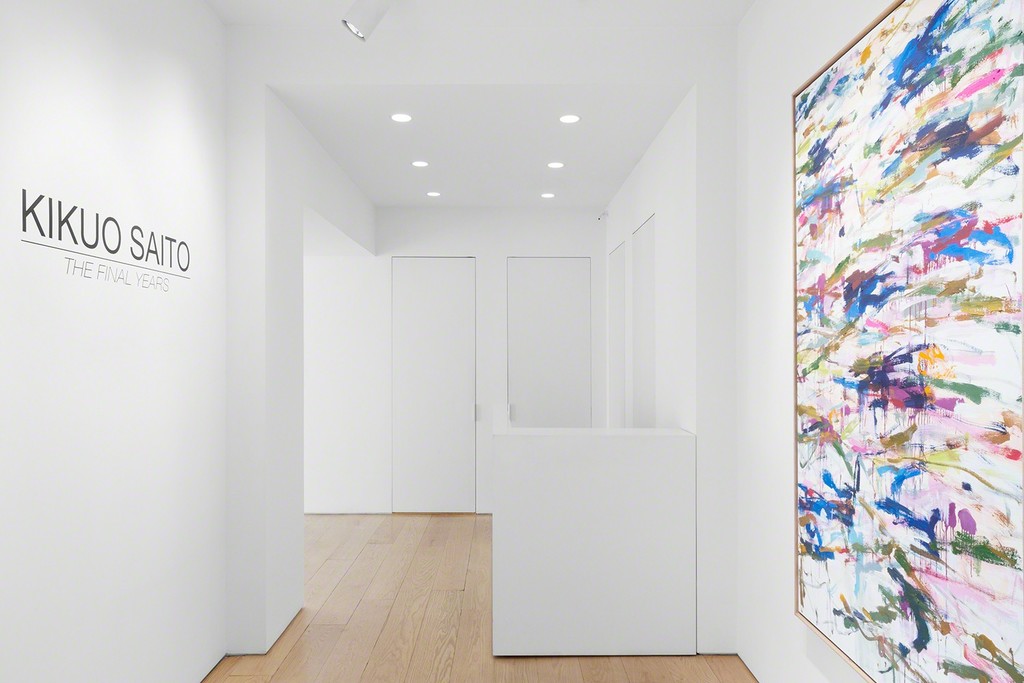 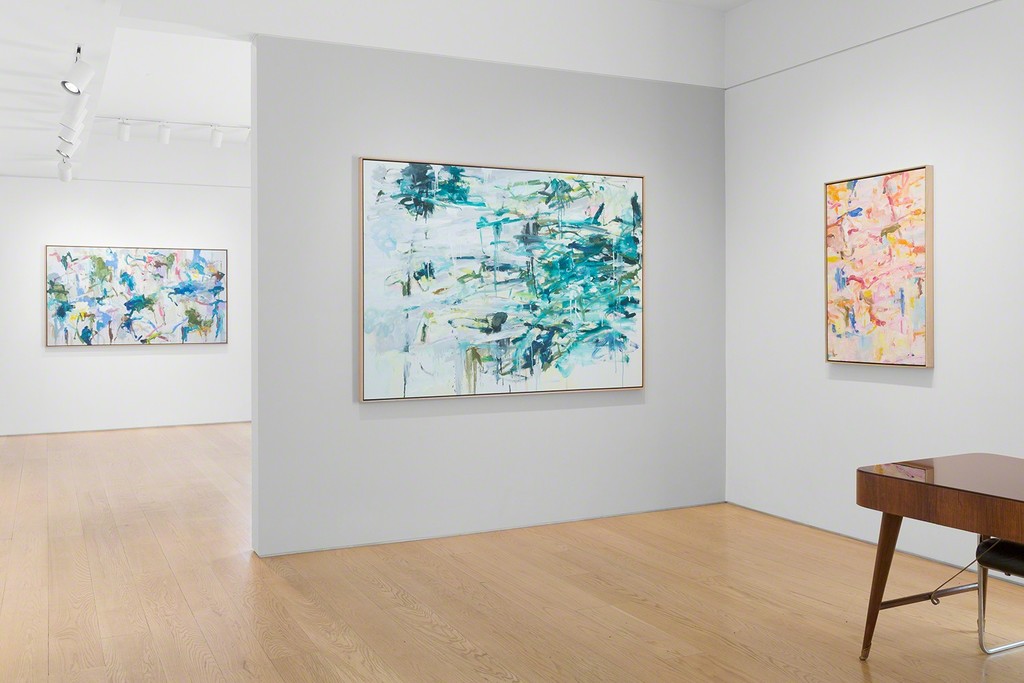 It's hard to resist seeing an artist's final works as a summing up, if not of everything that came before them, then, at least, of his preoccupations over his last few years. Sometimes, of course, this approach is pointless. Georges Braque, for example, investigated unprecedented imagery in his last canvases - the farm fields near his house in Normandy, machinery, and such familiar objects as his bicycle - presenting them at a newly generous scale, with a new boldness and breadth of handling. Kikuo Saito's paintings from 2015, completed during the last year of his life, also seem new, in many ways - more intense, perhaps more fluid than many of the works that preceded them. Yet they can also be accurately described as triumphant summations of decades of exploration. They seem to be the most passionate, free-wheeling iterations, to date, of many of the various dominant themes visible in his work since he first began to exhibit - when he withdrew from the collaborative world of vanguard theater (as stage designer and conceiver of performances), where his reputation was originally established, in order to devote himself to the solitary world of the studio.

First, there is color, one of Saito's strengths and a principal generating and organizing factor in his paintings, from the start. His last works depend on a range of radiant hues that conjure up the natural world without reminding us literally of anything we've seen before. It's as if Saito had detached his acute awareness of nuances of light, weather, foliage, and flowers from whatever triggered that awareness and distilled his responses into discrete, pure painting events. We are confronted by zones of evocative color, freely deployed against white or pale grounds, that obey not the logic of chromatic relationships in nature, but only the artist's will: clusters of odd pinks, ranging from pellucid near-lavenders to rusty near-browns; luminous golds and oranges exploding out of black-browns; liquid blues; clear yellows, greens, and rose flickering behind a web of blue-black, like light through a screen of branches. Somehow, while remaining stubbornly abstract, without suggesting in any way disguised landscapes, these paintings are also richly associative. They can suggest qualities of growth and seasons, usually with an implicit sense of motion: the unstable, reflective surface of water; windblown wooded hillsides; and more. But at the same time, they insist that we acknowledge the presence of the painter and the action of his hand in disposing the scrawls and patches of color across the canvas.

If Saito's last paintings initially claim our attention with the richness and subtlety of their hues, they hold and further reward that attention with the inventiveness of their drawing. While they may seem, at first acquaintance, to be primarily about color and color's non-specific associative properties, they prove to be equally about mark-making. There are no large expanses of unmodulated color, no defined planes, but instead, loosely "woven" fabrics of floating brushstrokes of various kinds, tenuously held together as if they exerted a weak magnetic force on one another. Each canvas has its own calligraphic character and rhythms. Saito's vocabulary of marks includes urgent scribbles, delicate loops, staccato horizontal strokes, fierce slashes, and meandering trails, at times combined in unexpected ways. In earlier series, he often used elegant Roman capital letters in illogical sequences (a legacy of a theater performance about John Ruskin in Italy), frequently aligned on a grid and played against loosely "written" nodes of color. Other works suggested messages in illegible cursive writing. It's worth noting than neither Saito's earlier "letter and message" paintings nor the "stroke" paintings of 2015 appear to have been inspired by his native Japanese calligraphy. Over the years and especially in his last works, Saito seems to have invented a new kind of gestural "alphabet" for himself, equally independent of the Japanese characters of his early life, before he emigrated to the U.S., and of the printed and written letters of his life in New York. The marks in his paintings of 2015, now floating, now gathering in conversational groups, now purposefully traversing the canvas, have become eloquent signs, carriers not only of the complex colors with which Saito builds his paintings, but also of deep feeling and energy. It's not an overstatement to say these poetic, energetic works are among Saito's best. They make us celebrate his achievement and miss him even more.