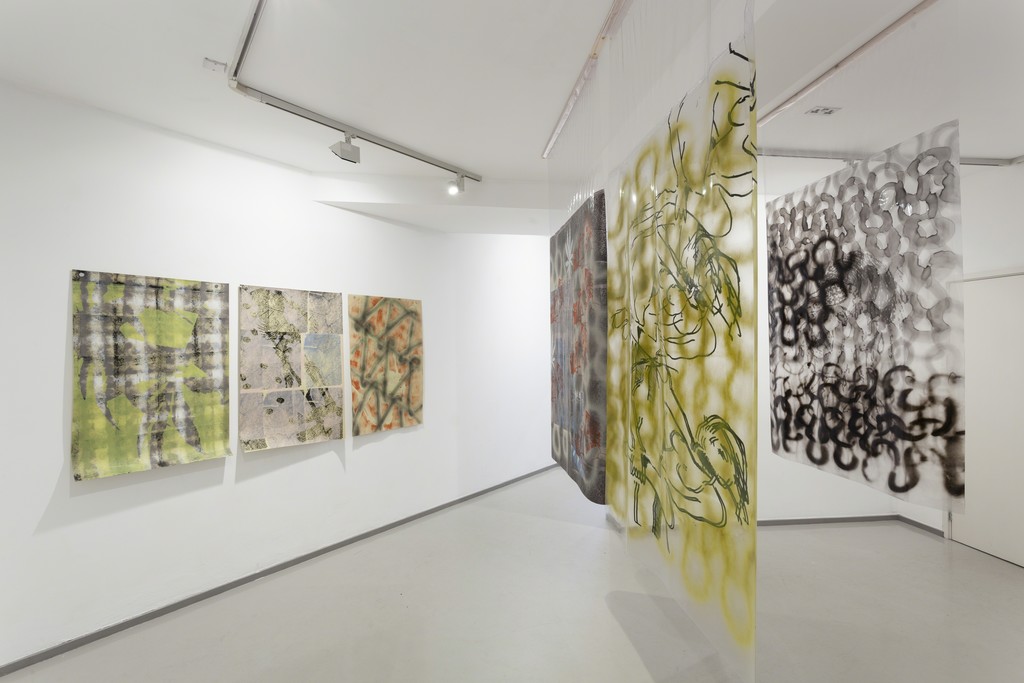 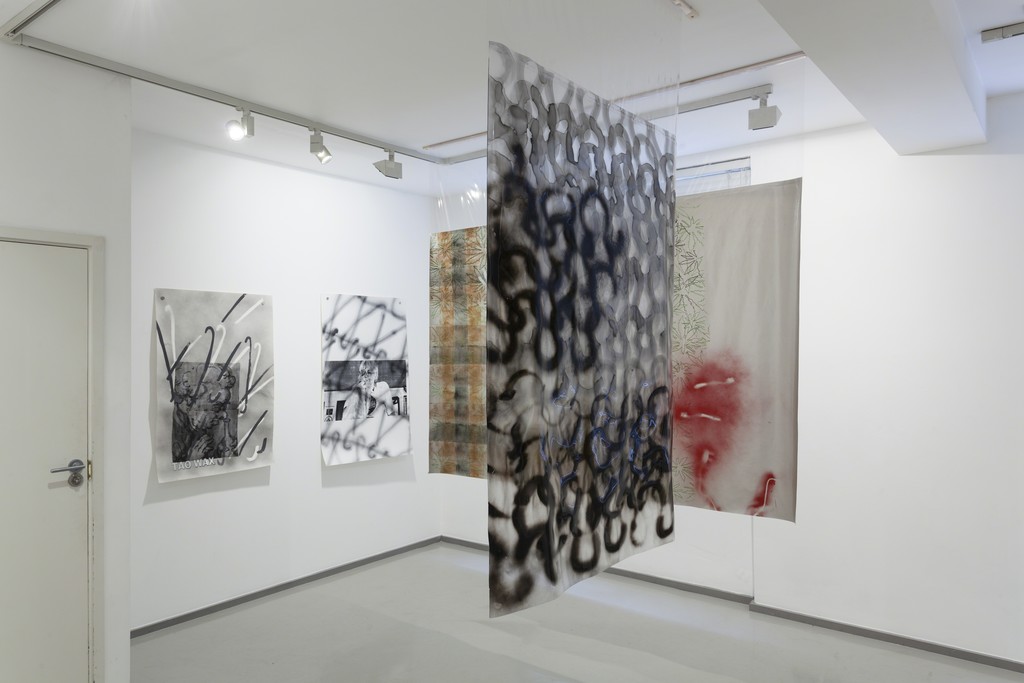 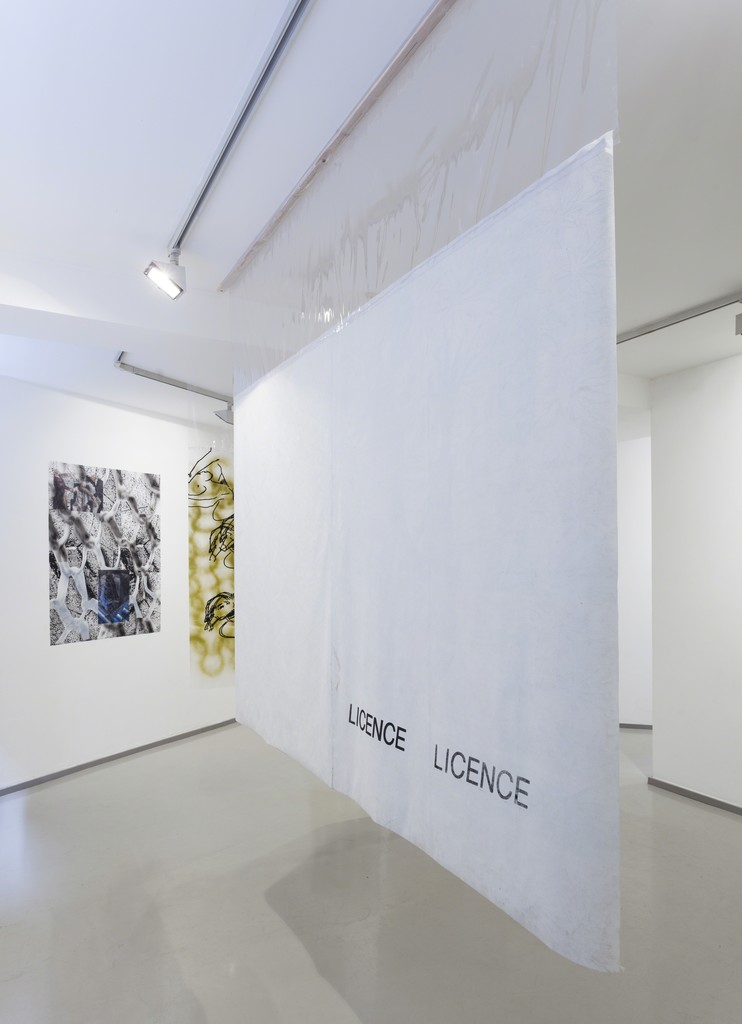 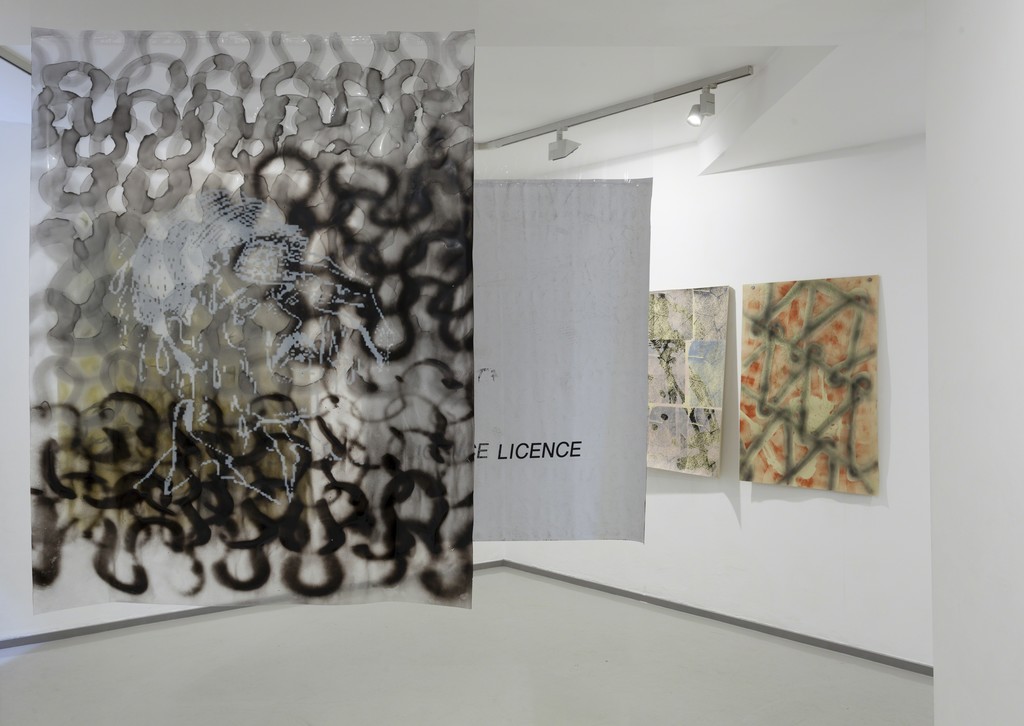 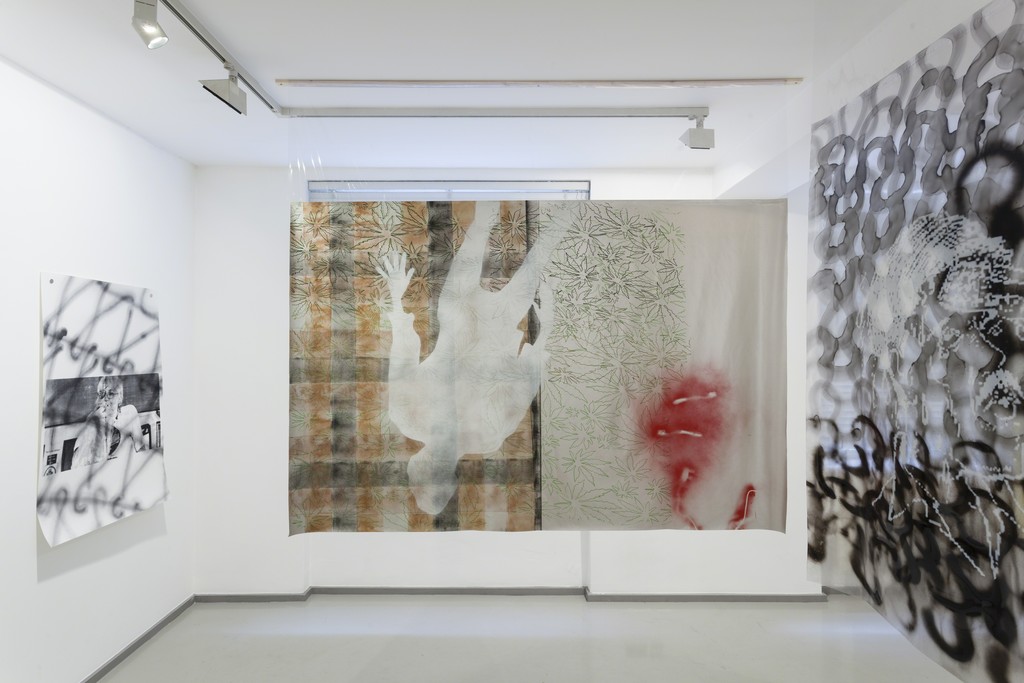 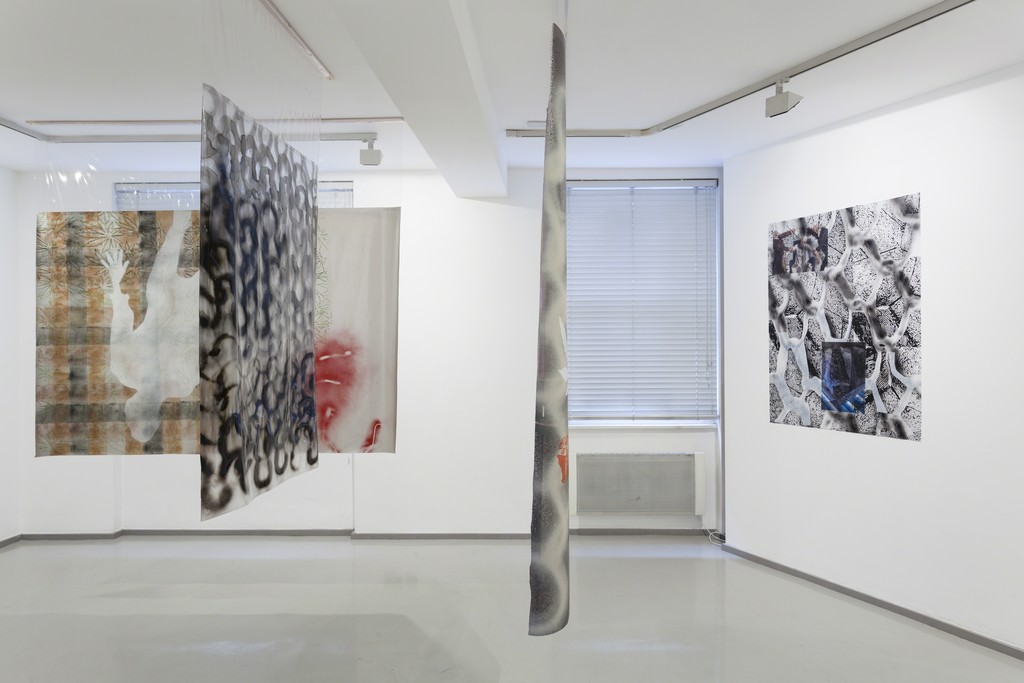 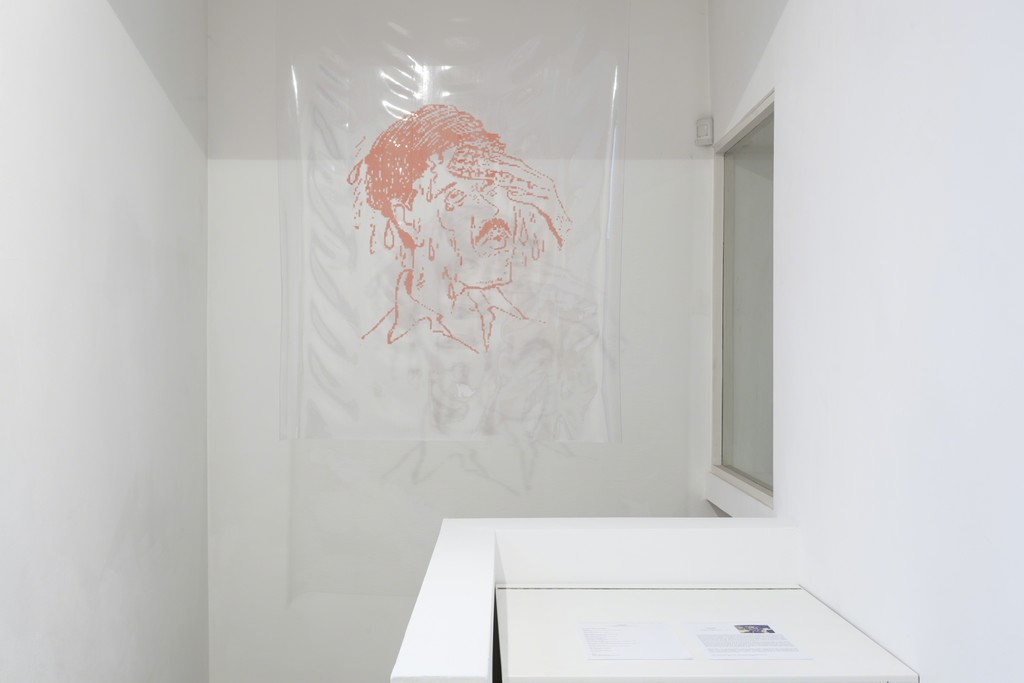 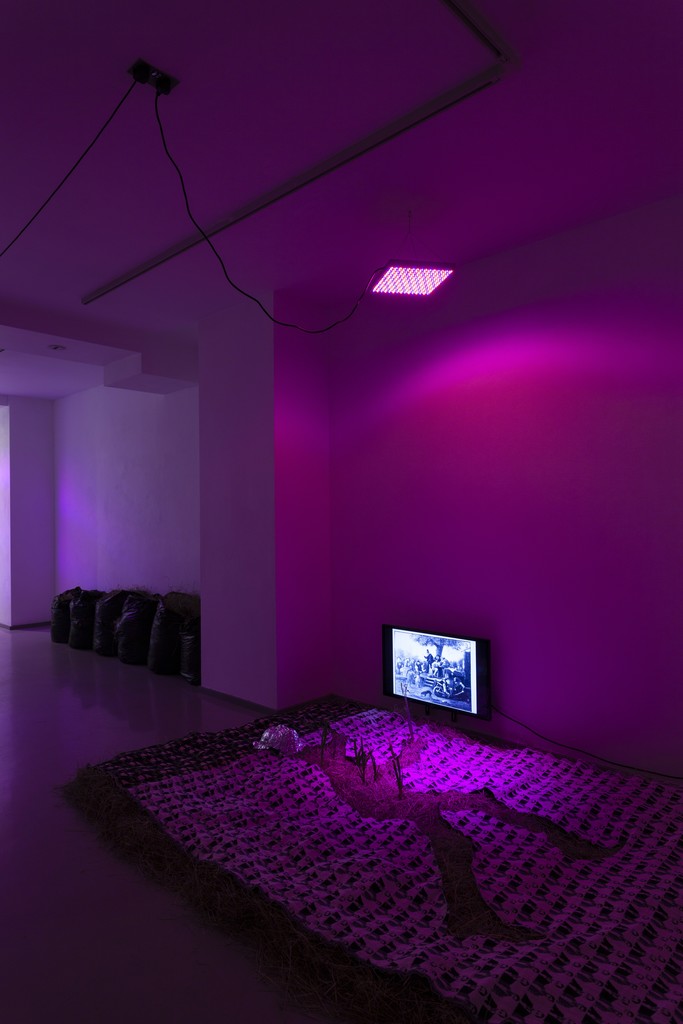 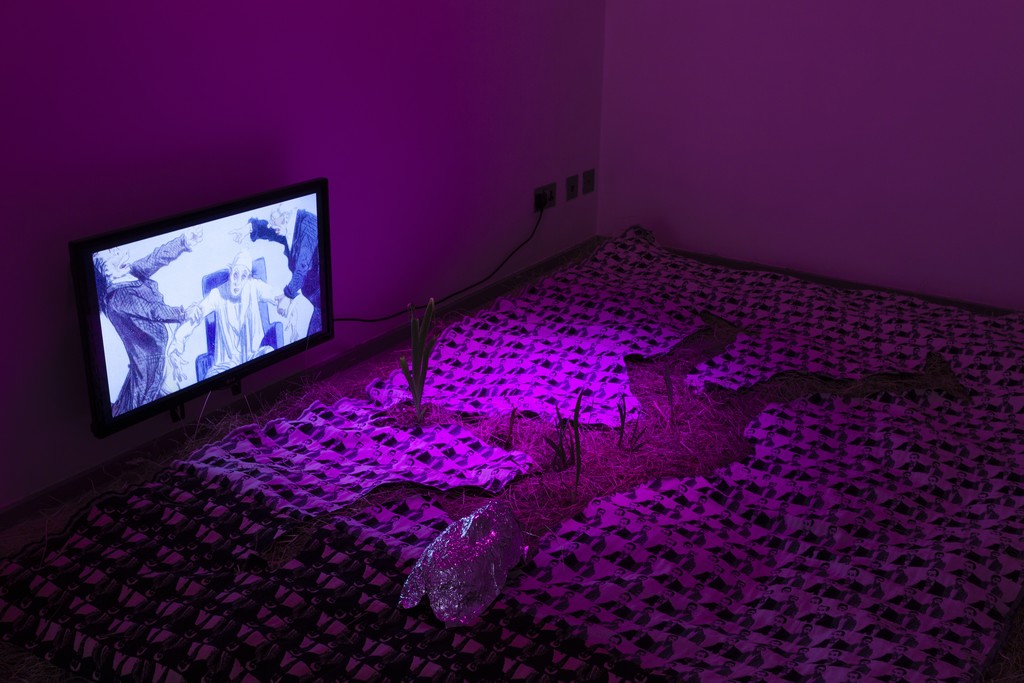 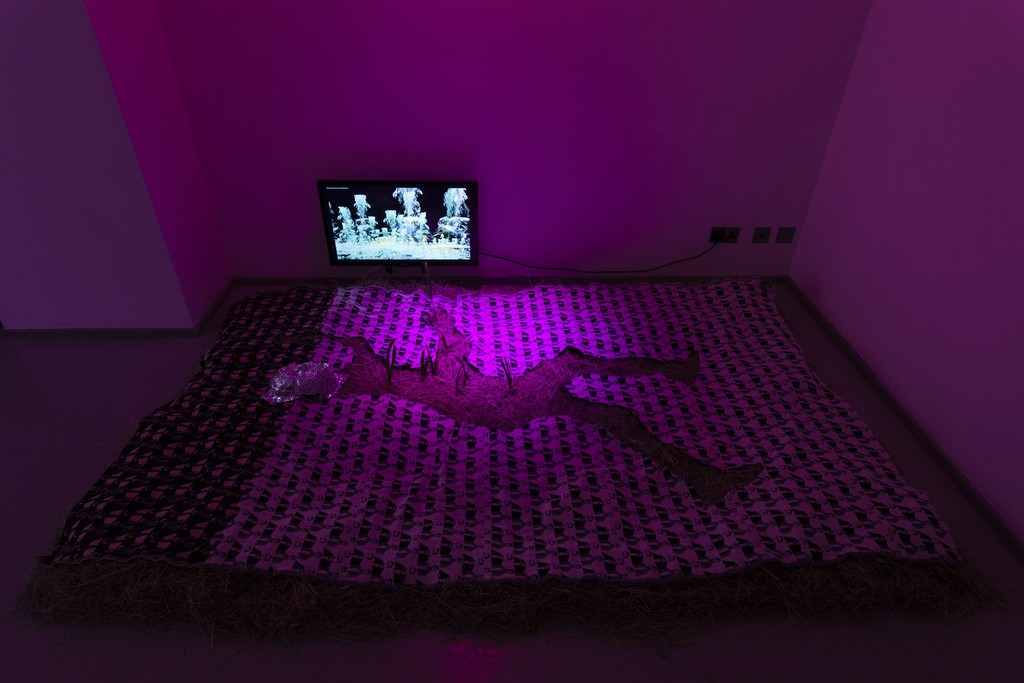 Laure Genillard is pleased to present Licence, an exhibition of new works by Camilla Wills. Licence speaks in various ways of free authority. Permission. A reason to deviate from fact, convention or acceptable behaviour. Upstairs a group of silk-screen collages provide scenarios, outlines and distortions involving imagery of inhalations, sweat, digitised skin, webbing, eggs, lubricants and doctors. These elements are in part taken from a file labelled ‘Quack doctors selling their wares’ that Wills found in the Warburg Institute image archive. The character of the un-licenced hustler, the exaggerator exhibiting his equipment, trusting an inconsistent science, promising regular resurrections and miracles led Wills to make an ironic link to the activity of art-making. Fictitious capital is generated through unbacked speech acts, and what matters is how work rapidly transforms confusion (symptoms) into a convincing economy. The bedside (beside) manner of the artist’s body is required in this practice as a promise, or evidence.

Downstairs “immunity fabrics” are presented on beds of straw. The jacquard weave design shows the faces of two French doctors who are attempting to legalise medical cannabis for pain relief in France. Wills offers up screen-printing as a process that enacts the permeability of the body. The silkscreen is made up of holes, the photographic exposure using emulsion is a conundrum of the porous and insoluble, of diffusion and new meaning. In the act of printing, the mark of the body is variously apparent depending on the strength of contact. This becomes pertinent when thinking of both the material technique and the application of medical treatments. The ability that creams and gels have to pass through skin, positions the quack doctor as a ghost. A ghost or idea that inhabits the work and a ghost that can traverse boundaries.

Camilla Wills is an artist and editor currently based in Paris. Recently her work was shown in 'Les Drames 3D', Triangle, Marseille; 'Sweating as Distribution', Treize, Paris; ‘My Vocabulary Did This To Me’, South London Gallery, London; ‘Voice ~ Creature of Transition’, commissioned by If I Can’t Dance... and Rietveld Academie, Amsterdam, and ‘Bard Girls Can Fly’, White Flag Projects, St. Louis (2015/14). Forthcoming solo projects include Gaudel de Stampa, Paris and White Cubicle, George and Dragon pub, London.