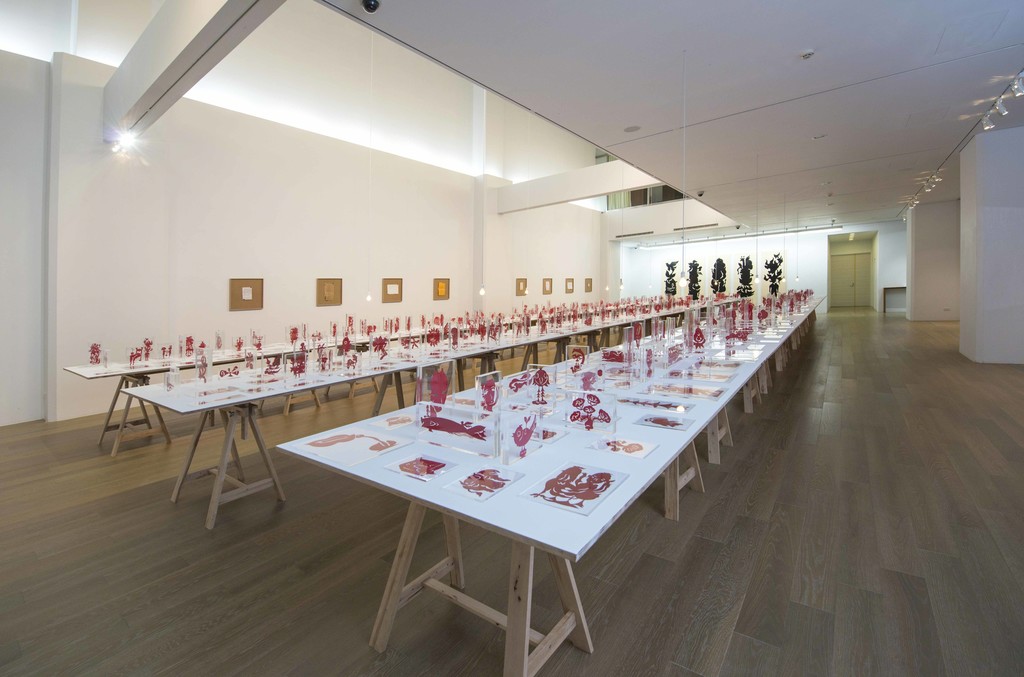 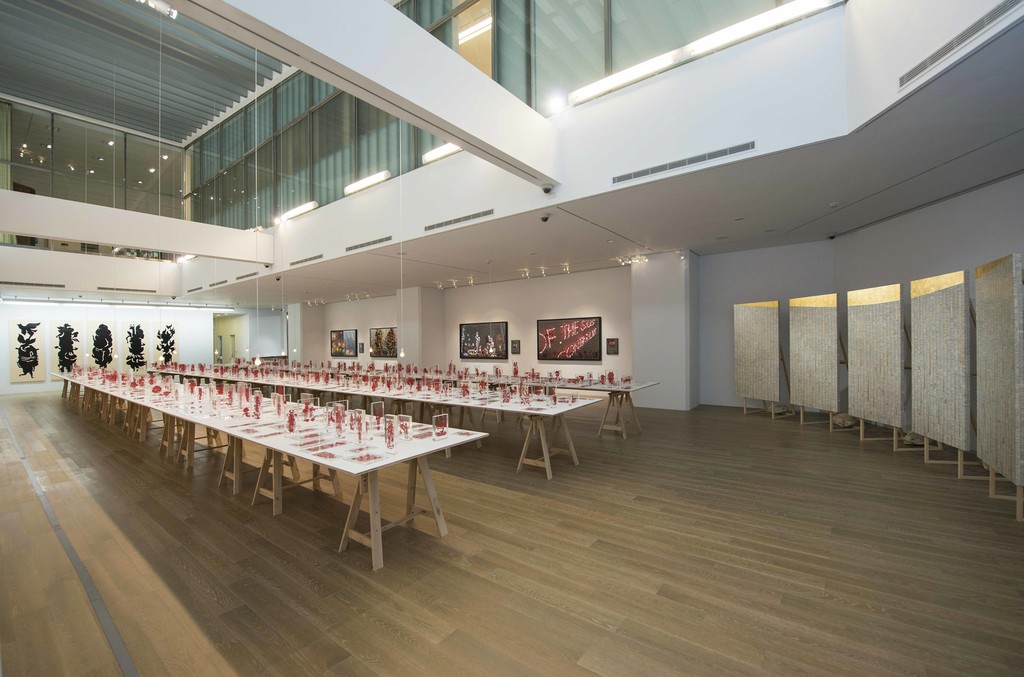 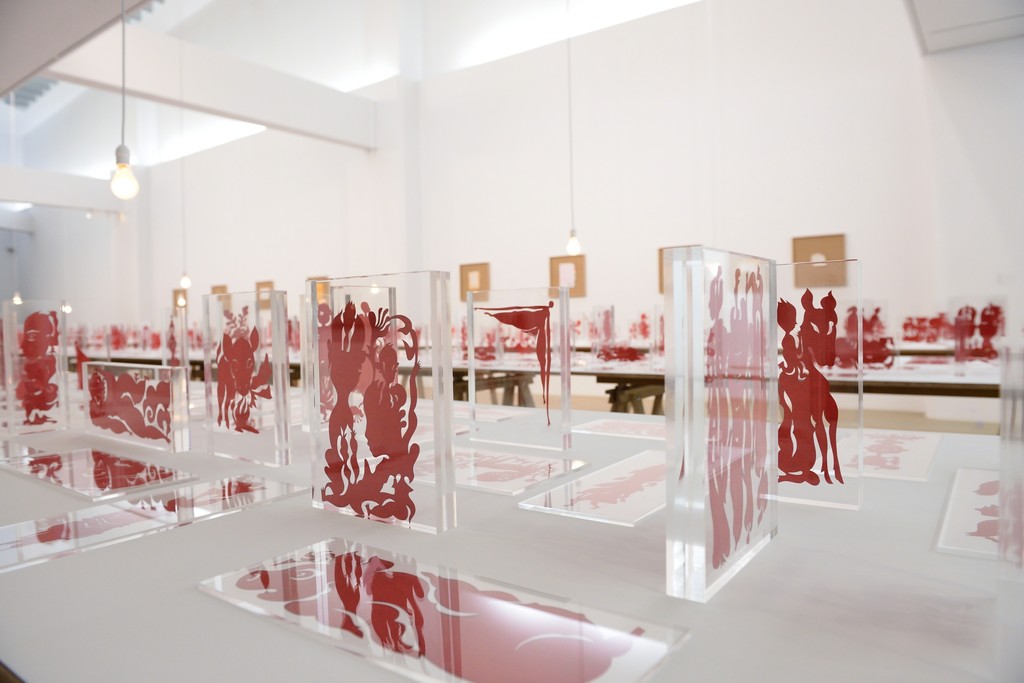 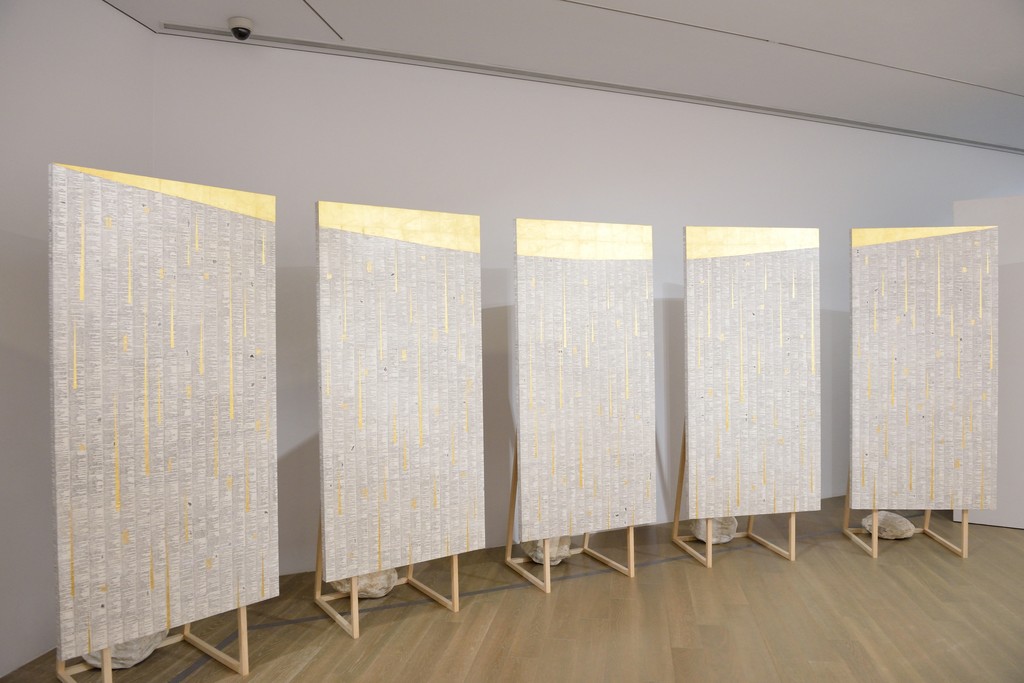 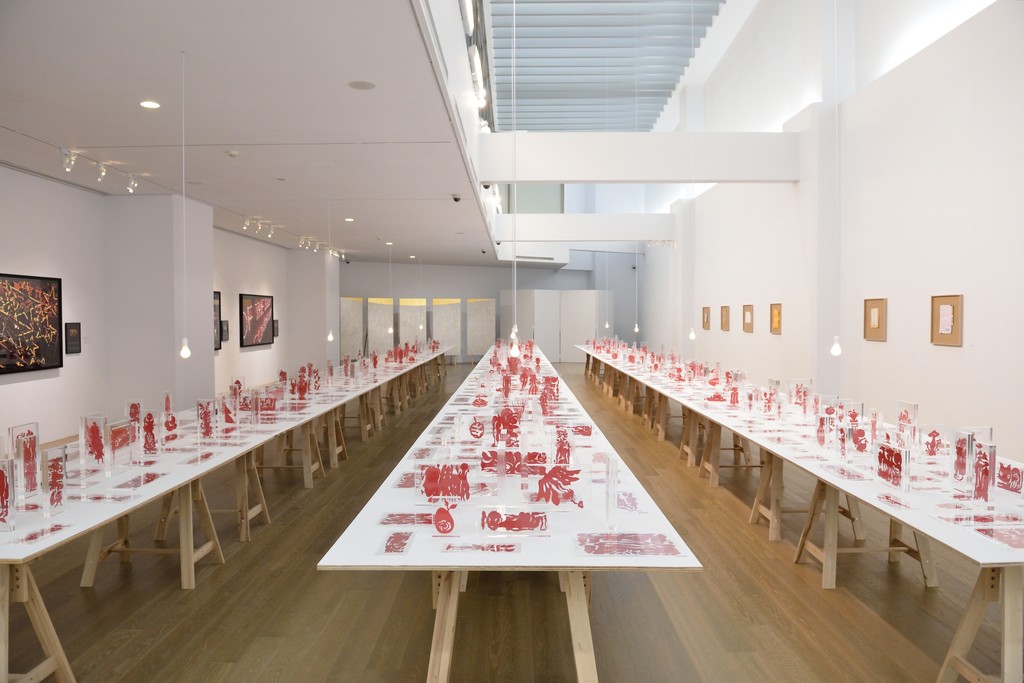 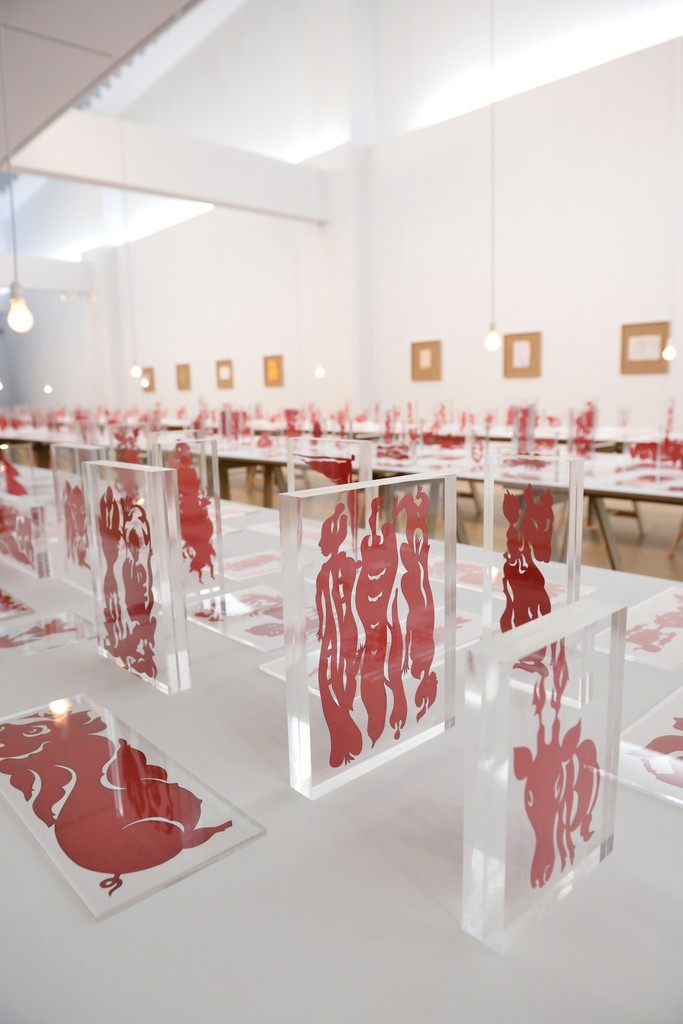 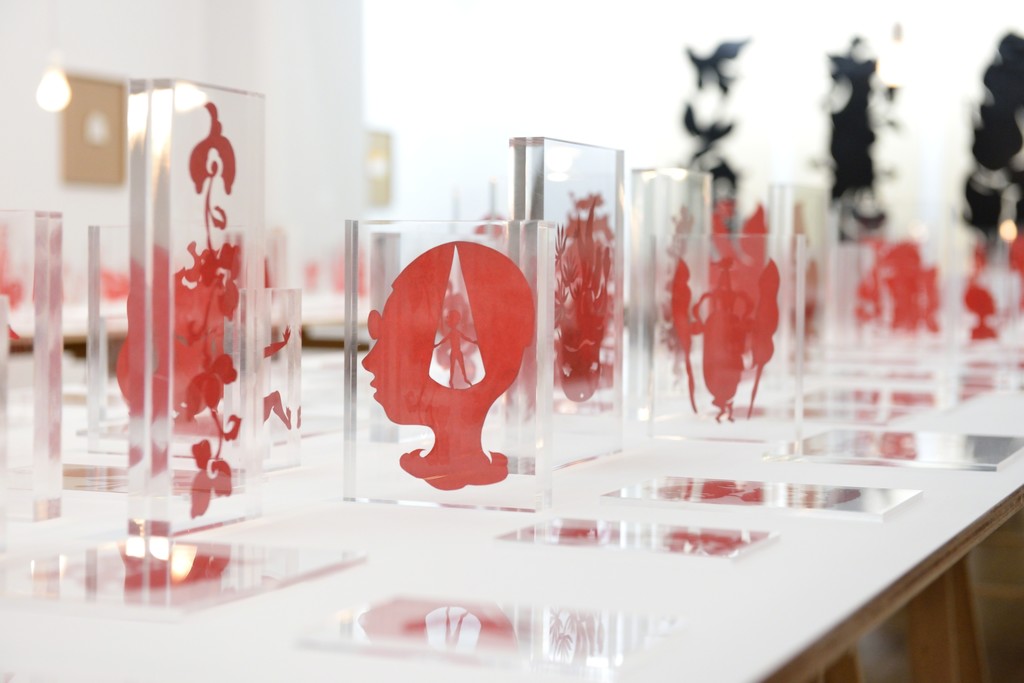 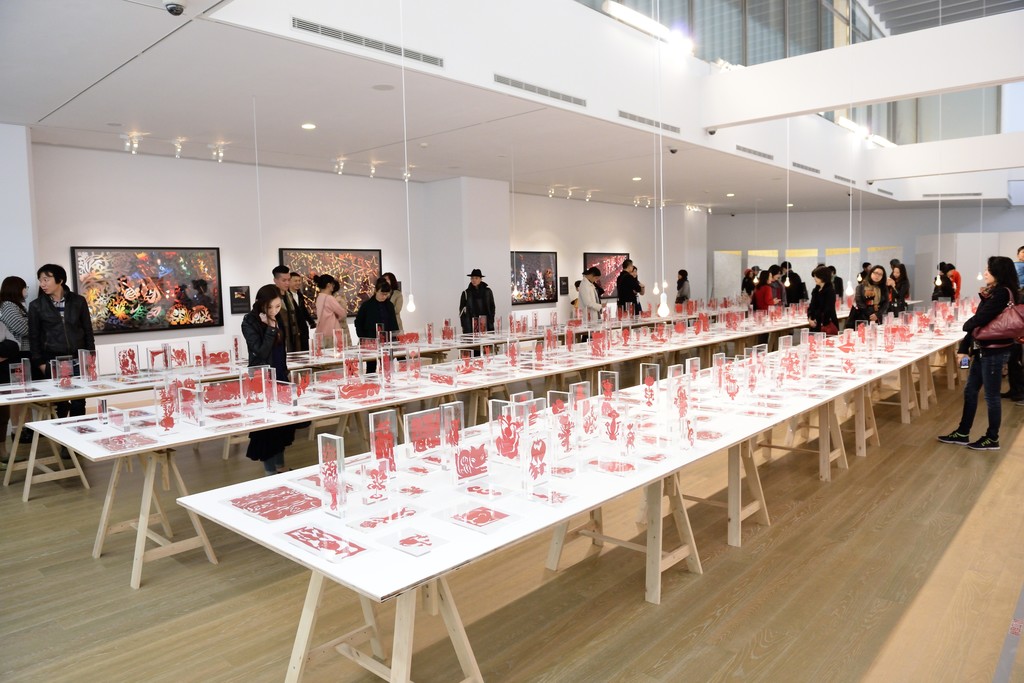 “Along with Night Sky, Ocean, and Dusk, Paper-cut Awaits Right Before Your Eyes.”

The artist Jam Wu is not only known for his paper cutting but also the recent collaboration with Hermès Petit h, with which he has designed a series of leather works and silk scarves as being closely followed by the media of China. Now, Wu’s solo exhibition One Thousand And One Nights / Nine Sea / An Evening will be held between 11 April, 2015 (Sat) and 29 May, 2015 (Fri) at Liang Gallery. The opening reception will begin at 6 pm on 11 April, 2015. We sincerely welcome you to this mysterious world of modern paper cutting.

This solo exhibition of Jam Wu is an attempt to reach for further possibilities with his well-known paper-cut series. Compared with his recent projects which focus on art and social connections, this exhibition seems to have expunged paper-cutting’s notable quality as a medium and has shifted into contextual developments based on words. However, how can paper-cut, a medium of mundane, popular quality, break from its regional symbolism? At the same time, how to convert traditional culture’s mundane quality into contemporary ideas and to use them to interpret our current society and individual conditions? The process of cultural inheritance and repeated evaluations of modernity seems to be filled with echoing noises, and this is something frequently observed in Wu’s previous creative endeavors. The metonymy embodied in One Thousand and One Nights presents a more adamant tone of voice, with the aforementioned issues responded. The sounds acquired from dialogues between the participants and the paper-cut images are used to offer a new way of seeing contemporary society – a way to see individuals, to see society, and to see the act of “seeing”.

The project of One Thousand and One Nights is created with a creative frequency that mimics Wu’s preferred slow jogging pace. It is an attempt to take that long, extensive, yet unspeakable cluster he has encountered during the creative process and to substantialize it into a thickness that is massive and composed of multiple layers, resulting in a display format similar to a check-list and containing the psychological states experienced in his life while making art. The project began with mailing out various paper-cut artworks to the project participants. The participants had already agreed (or were forced to agree) after receiving the paper-cut to provide a piece of writing in exchange for the “gift”. Following the deliveries, words began to pour in and began to form a Marcel Proust-like novel. The intensive influx of words also indicates that compilations of images are also being consumed, with perceptual productions negating rational productions, as paper-cuts are exchanged for words. Through this instructive creative endeavor involving the act of exchange, the artist’s intent is “for words to be the only remainder of the entire artwork.” Could it be possible for this kind of production exchange to transcribe visual viewing into textural reading?

Although a thousand and one pieces of paper-cuts could be storied away without much difficulty, however, as a singular artwork, the artist’s ambition for paper-cutting is showcased in this project; furthermore, it also imposes a challenge in the gallery system for its marketing and collecting prospects. This project of “exchanging paper-cuts for words” is still on-going, and it will be interesting to see what will remain in the end and also see Wu’s transformation.

Jam Wu has won the First Prize of Louis Vuitton’s Journey In My Mind in 2010. Graduating with an architectural design degree, Wu is particularly talented for his arrangement of various materials around the whole space. “Photo-cutting Collection – Night” follows Wu’s previous practice to adopt “photos” as the materials for paper cutting. The photos were taken during the artist’s trips or residence in four different countries. The photo-cutting works invite viewers to savor the void and the incompleteness of images and to study the space being cut out. As for “An Evening – Dictionary of Traditional Chinese,” the artist deconstructs an old dictionary, using letterpress printing as his materials to express his sentiments about the gradual death of “paper books and traditional Chinese” as the nostalgia for the childhood when one learns to read.