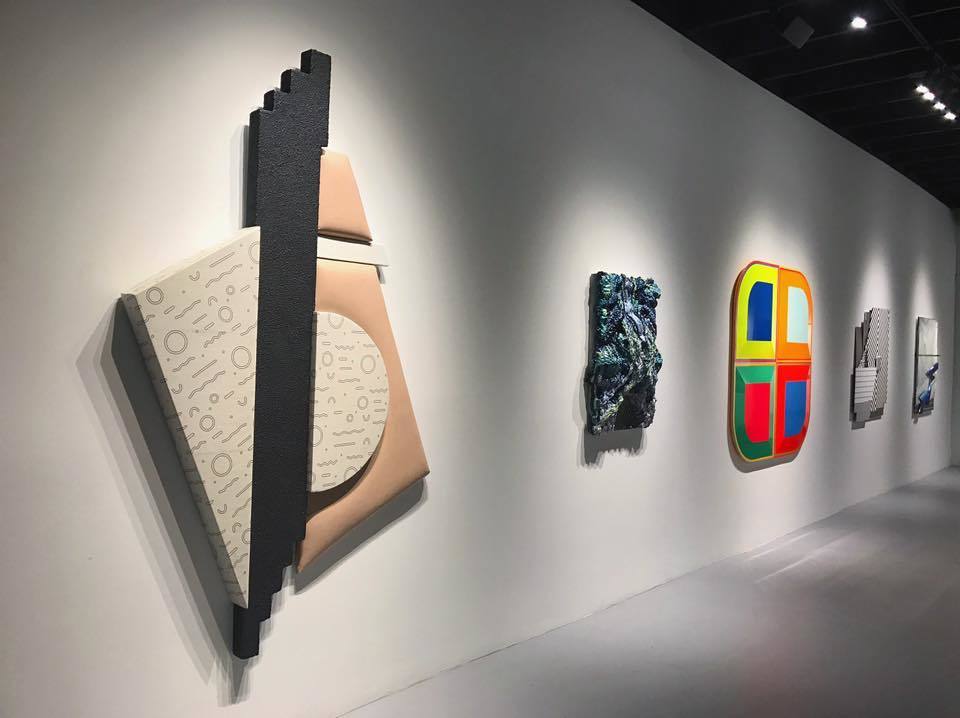 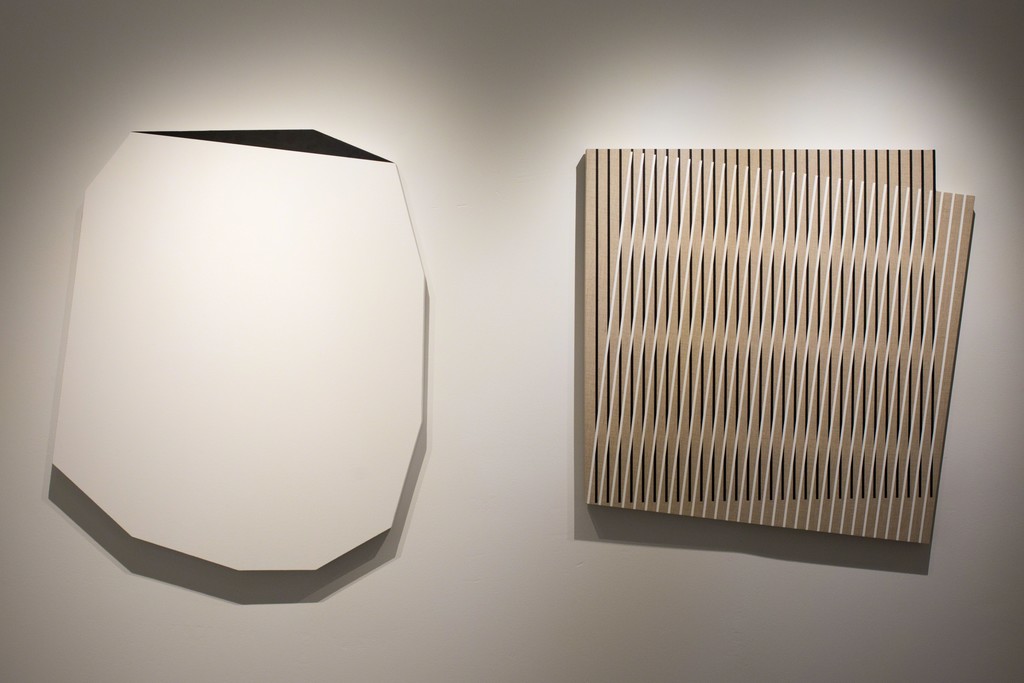 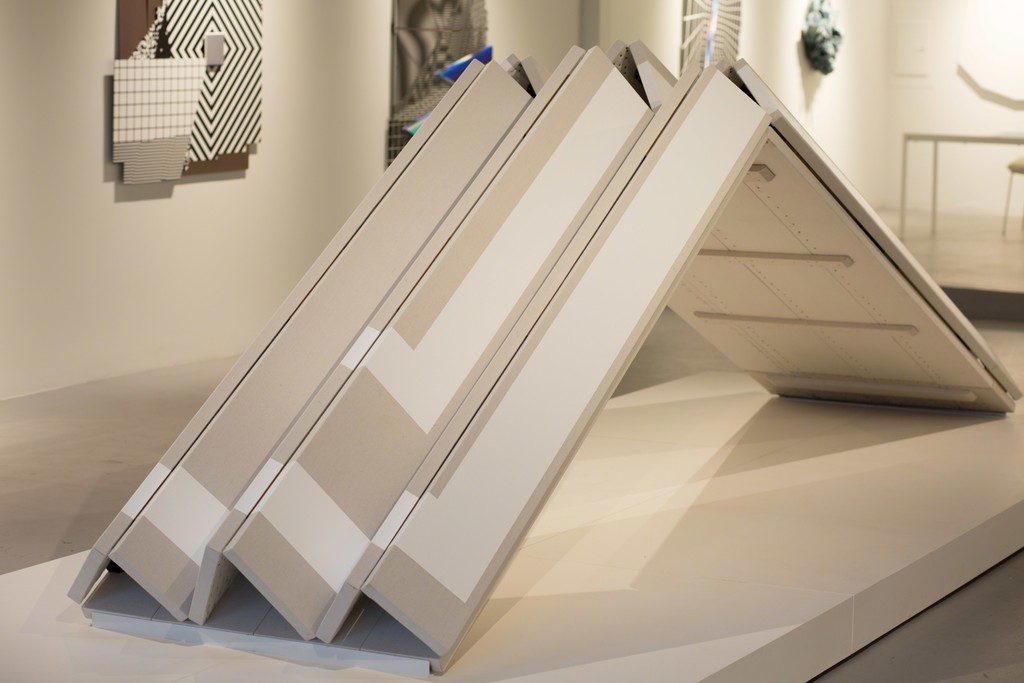 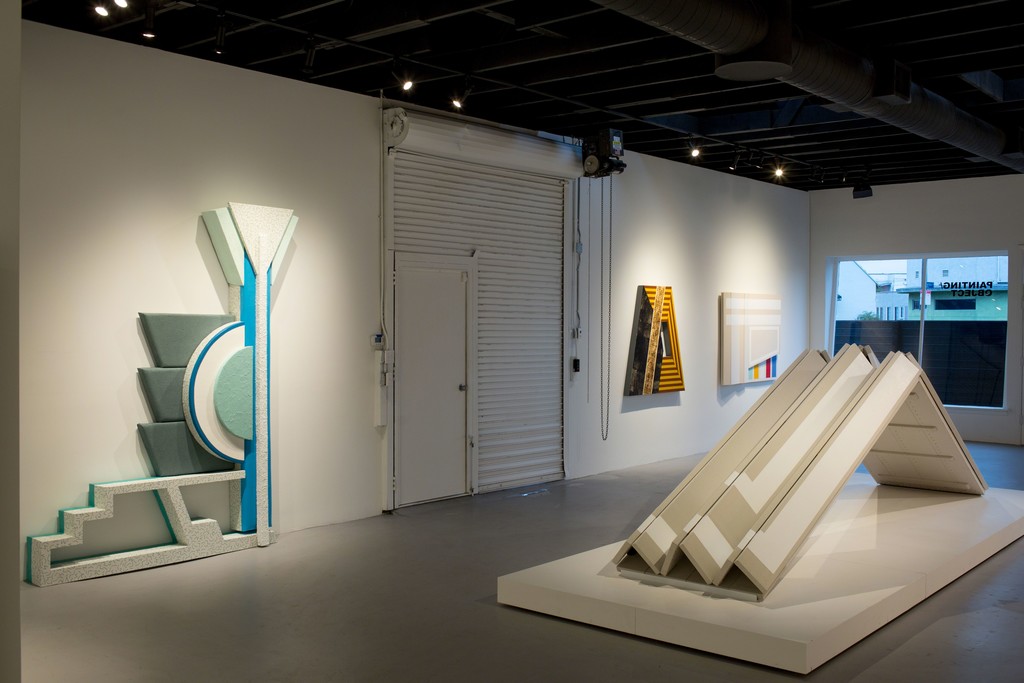 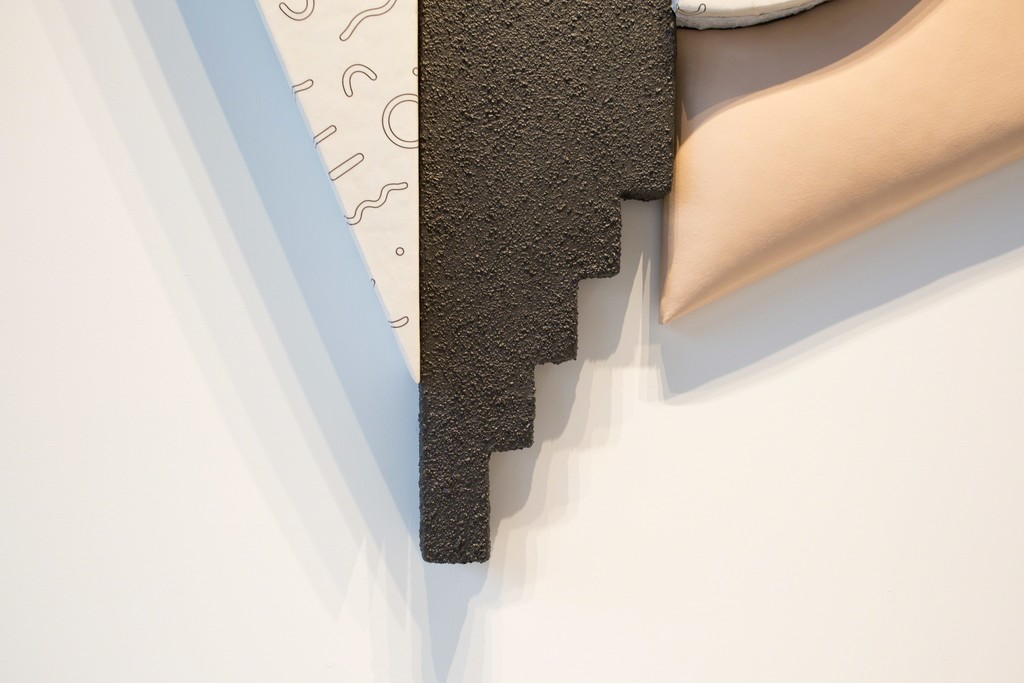 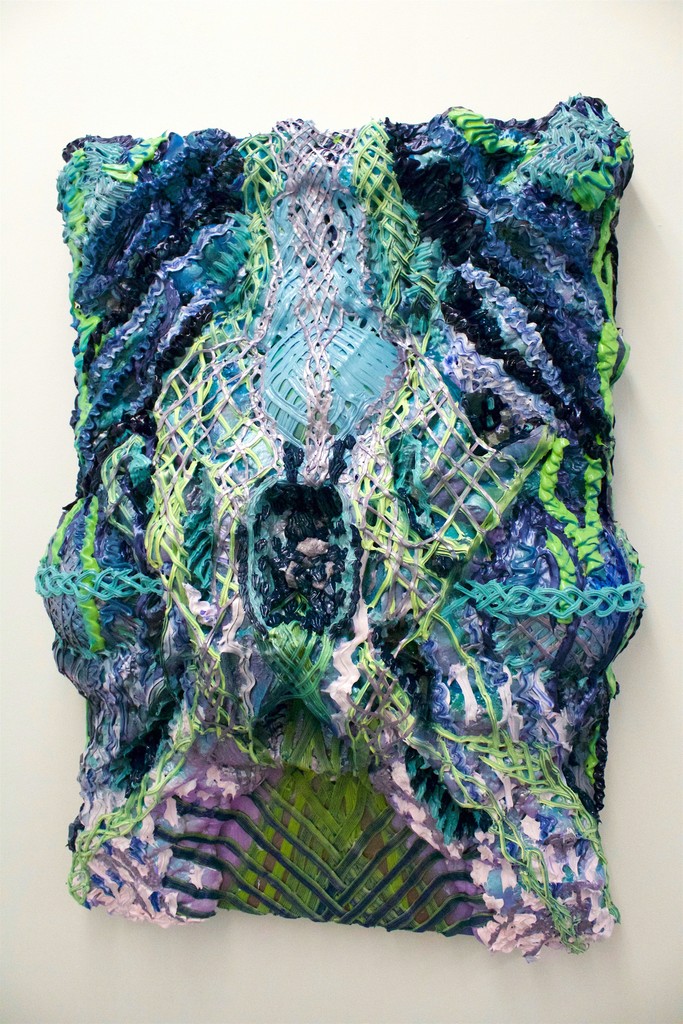 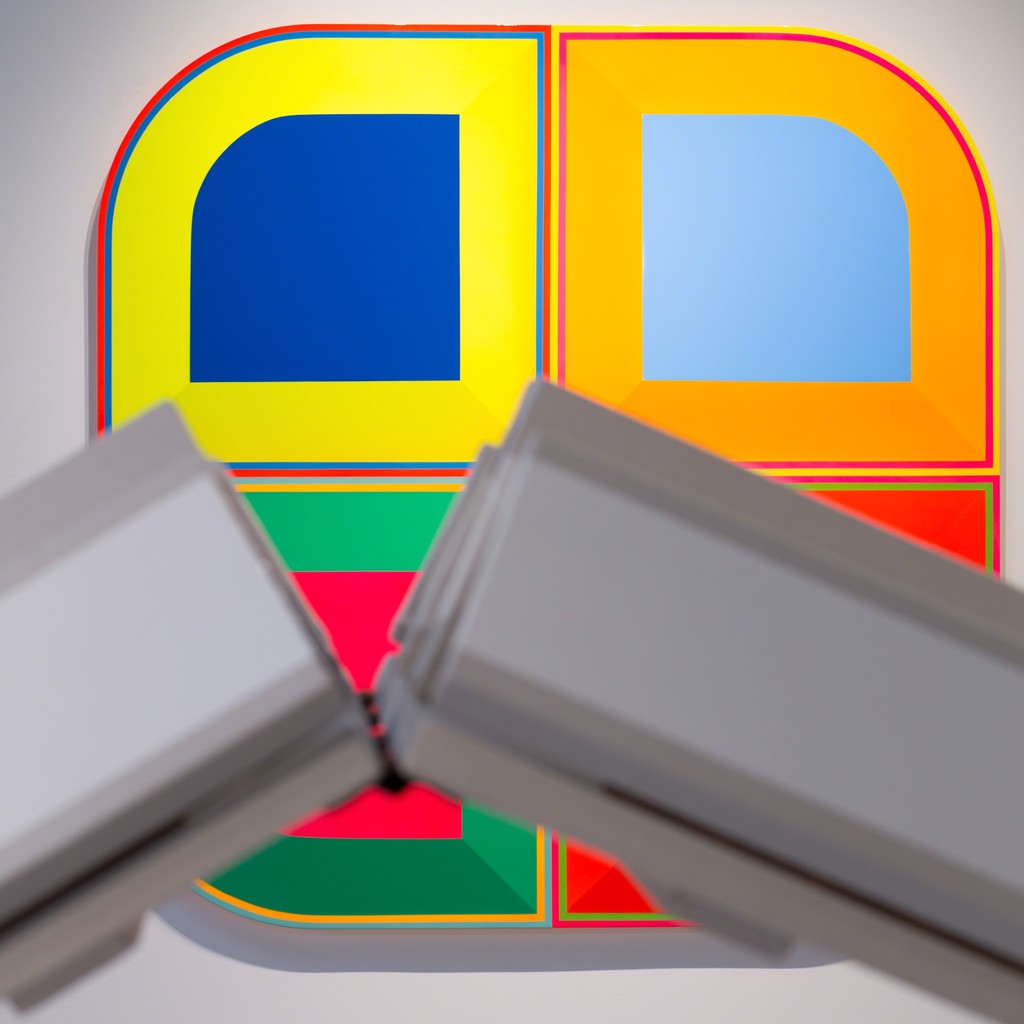 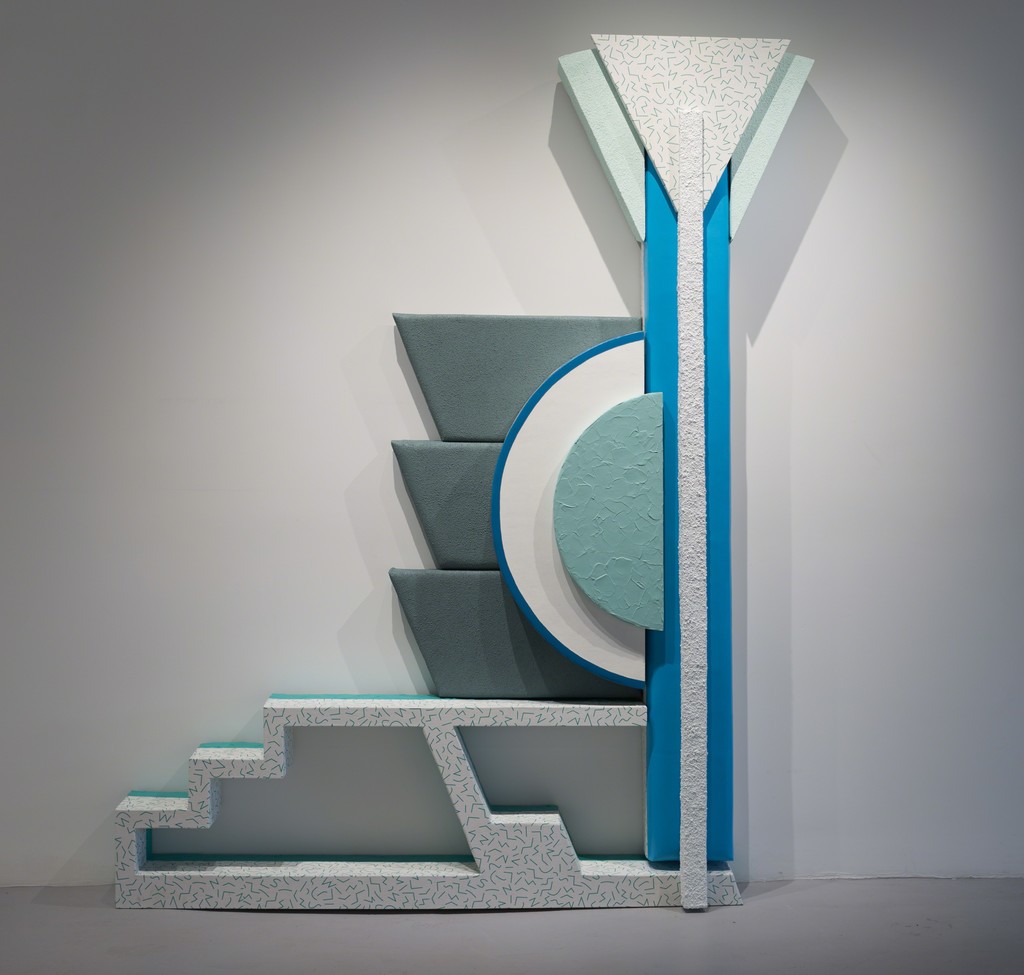 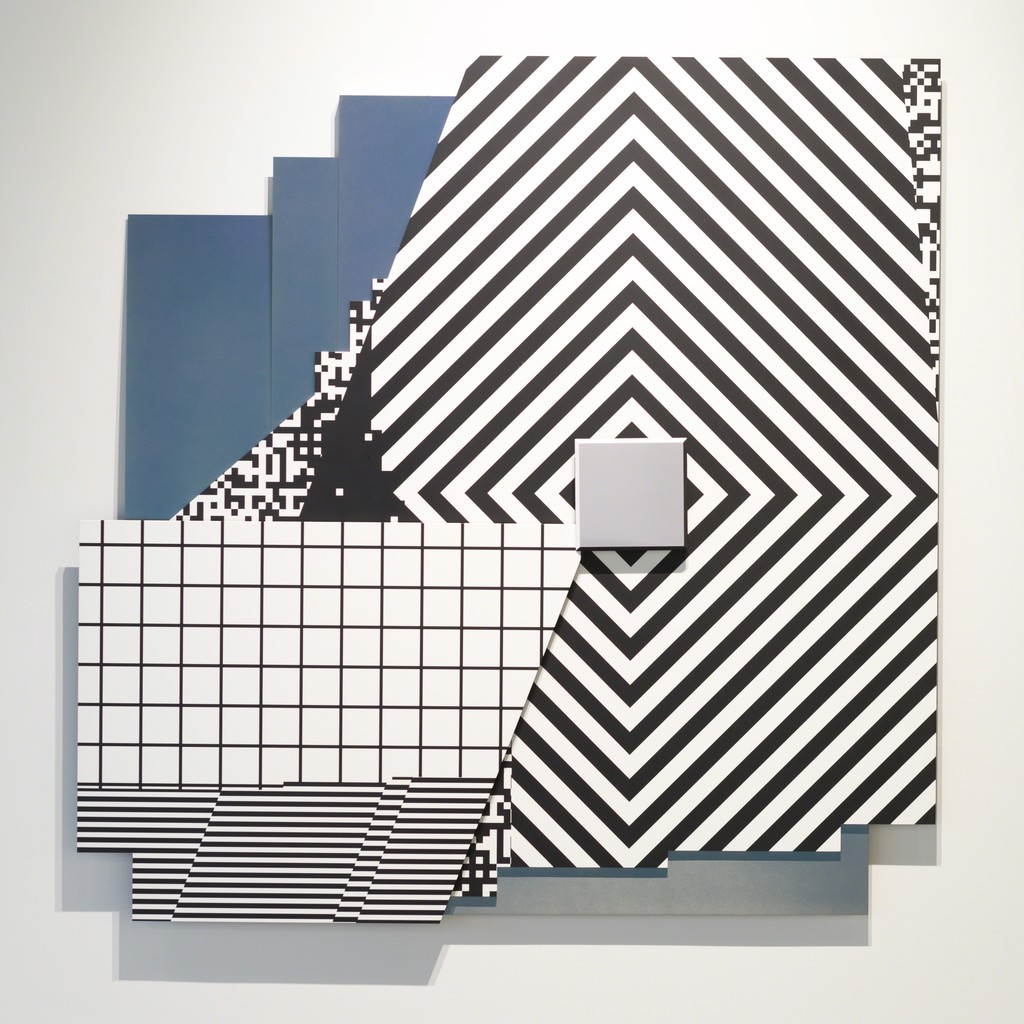 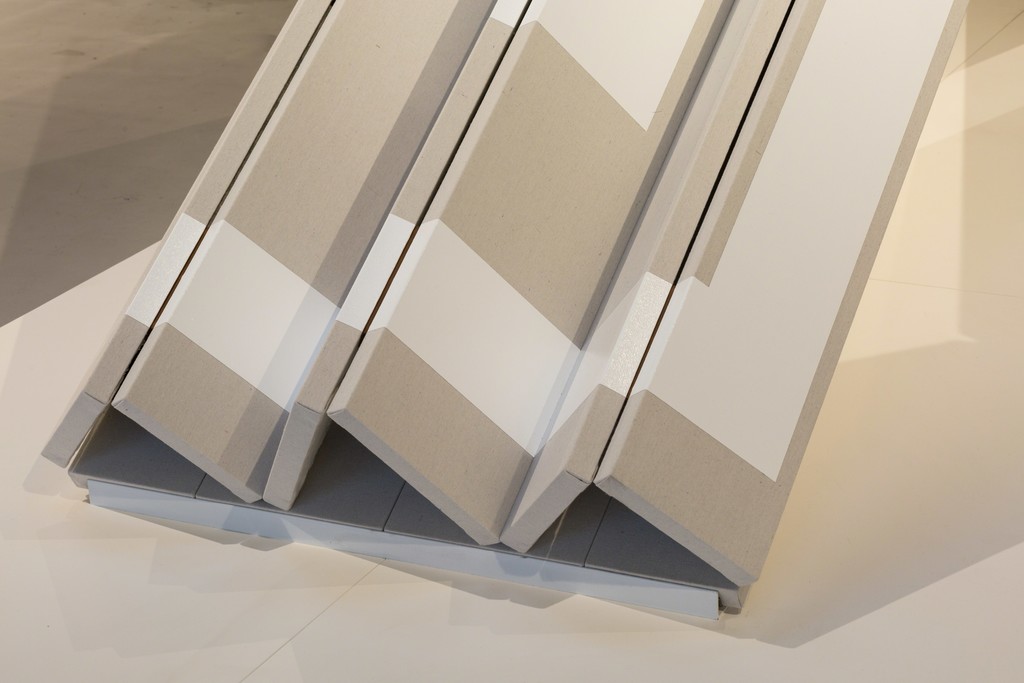 PAINTING/OBJECT (curated by Jason REVOK) will assemble varied works that not only consider the relevance of the shaped canvas in present day contemporary art, but many included push the boundaries of this investigation by extending their materiality into the 3d realm. The birth of the shaped canvas in the 1960s was an outgrowth of the desire to shake up some of the most central, basic issues of abstract painting, expressing the artist's ambition to investigate tangible space and reject the need for illusory shapes and forms. Though varied in process and media, the works are substantial, abstract, and frequently function as both painting and sculpture. Contemporaneously, they examine the shaped ground plane along with the inclusion of mixed media collage, assemblage, additive materiality and pattern.

Johnny Abrahams' graphic op-art style paintings provide an illusion of movement that is restricted within the space of the canvas. Often working exclusively in black-and-white, his pieces contrast curving, zigzagging and straight lines with a figure-ground reversal plane that enhances the viewer’s subjectivity through movement. He is interested in the graphic relationship between light and grid. Transparent lines intersect, implying motion by shifting layers of shape and line through an unending play of hierarchy. Like Abrahams, Felipe Pantone is fundamentally invested in the manner in which line and shape create dynamic composition. Drawing from his background in graffiti, Pantone's work has evolved to examine the interaction between typography and abstraction, with key elements of kinetic and op art. He utilizes gradients, graphics and shadows that blend black and white divisions of line and shape, which he then disrupts through the intersection of intense color. Conceptually, Pantone finds interest in the speed and visual language of technology, and the manner in which the digital age has created a new layer of cognitive existence for the human experience.

Brightly colored and immediate, the work of Beverly Fishman challenges the viewer’s perception and the addiction of our contemporary culture to science, technology, and the medicalized condition. Fishman’s work has a direct response through the deconstruction of pill iconography, and attempts to make the viewer feel physically sick through its careful color consideration, combining bright fluorescents and subtle gradations that inspire euphoria and optic stress in equal measure. The works appear candy-coated and liken the consumption of pills to the eagerness and ease of eating candy. A recurring motif in her work, capsules and tablets are employed as abstract modules through which constantly changing color and pattern combinations are created. This effect is heightened by the fluorescent halos cast on the gallery wall, as the beveled edges are painted to create auras that vibrate and hover.
The meticulous, almost machine-like perfection of Fishman's work is evident in the lines and exacting detail of Robert William Moreland’s geometric works, in which there lies clear evidence and appreciation for historically romantic practices and materials. Beginning with extended planning and engineering of four to six inch maquettes, the artist works toward a compositional conclusion he deems worth realizing in large scale. Leather hinges allow him to fold canvas-covered panels into spatial forms that mimic both midcentury minimalism and Japanese design, and it is from the 3/4 vantage point that his works may be at their best. Moreland combines his materials with the goal of achieving aesthetic synthesis, while allowing the inherent characteristics of each to remain intact. For PAINTING/OBJECT, he has created his first free-standing sculpture at an impressive 15 ft long.

Leah Guadagnoli’s work breaks the format of the traditional picture plane not only in its objecthood but also with its irregular shapes, plushness and depth. It is unique in its close relationship to the methods and aesthetic of furniture-making; her sizeable wall pieces are padded in foam and wrapped in fabric before being tucked together like couch cushions. She is strongly influenced by communal spaces, social engineering and an anti-aesthetic that includes "patterns and replicated surfaces that recollect the gaudy carpet, seating and walls often found in waiting rooms, airports, hallways and coach buses. People often ask to touch the paintings or just rub their hands against the surface without any permission."

Jason REVOK is a Los Angeles-based artist noted for his complex assemblage works. Like Guadagnoli, the elements that make up these paintings are meticulously fit together for a composition that uses shadow and the spaces between to create depth. Constructed of bits and pieces of cut wood, REVOK’s assemblage works function as hyperactive patterns. Respected for decades of influential and pioneering work as a graffiti writer, REVOK’s studio work increasingly explores systematic processes that involved either conscientious geometry or imprecise pattern (and in some cases, both). Another set of works for PAINTING/OBJECT ([untitled]_gradient_pearlWHT_graphite_1 and 2) are created using synthetic polymer to build up a textured surface before subtracting a carved diamond pattern by hand.

Matthew King's practice employs "techniques speciﬁc to hard-edge painting and photo collage, taking the form of three-dimensional objects that defy easy categorization. They function both as pictures and sculptures, always insisting on their spatial presence". With elements reminiscent of Dada-ism, he leaves his industrially produced materials and discolored photos rawly exposed, and accentuates their oddity with bold shapes and dynamic optical patterns. King sets up a tension between the impersonal character of the prefabricated materials he uses and the direct touch of his craft, at once cohering with Minimalism's aesthetic tendencies and jettisoning them.
Color and the continuous addition of fine material define the work of Calli Moore. Her use of acrylic paint pushes the medium to function as much as a fibre and a modelling material as a it does a film. Thick, layered, ropes of paint build on each other in multiple phases. The resulting webs, lattices, caverns, and protrusions give the work its depth and dimensionality. Seeming to grow organically off the gallery wall, her works are reminiscent of the natural world.

PAINTING/OBJECT will be on display at 5438 W. Washington Blvd. in Mid City, Los Angeles fromNovember 17 until December 12, 2016. For more information or to receive a catalog of available works, please contact [email protected].

LIBRARY STREET COLLECTIVE
Library Street Collective specializes in cutting edge contemporary fine art with a focus on emerging and established artists who have pushed the boundaries of traditional medium and exhibition space. Located in the heart of downtown Detroit, we present regular group and solo exhibitions while contributing to the artistic renaissance of the city's public, private, and heritage spaces. It is our mission to bring both world-renowned artists and exciting new work to a reimagined Detroit, as well as carry this sentiment as we expand our presence through exhibitions, special projects and art fairs nationally and internationally.