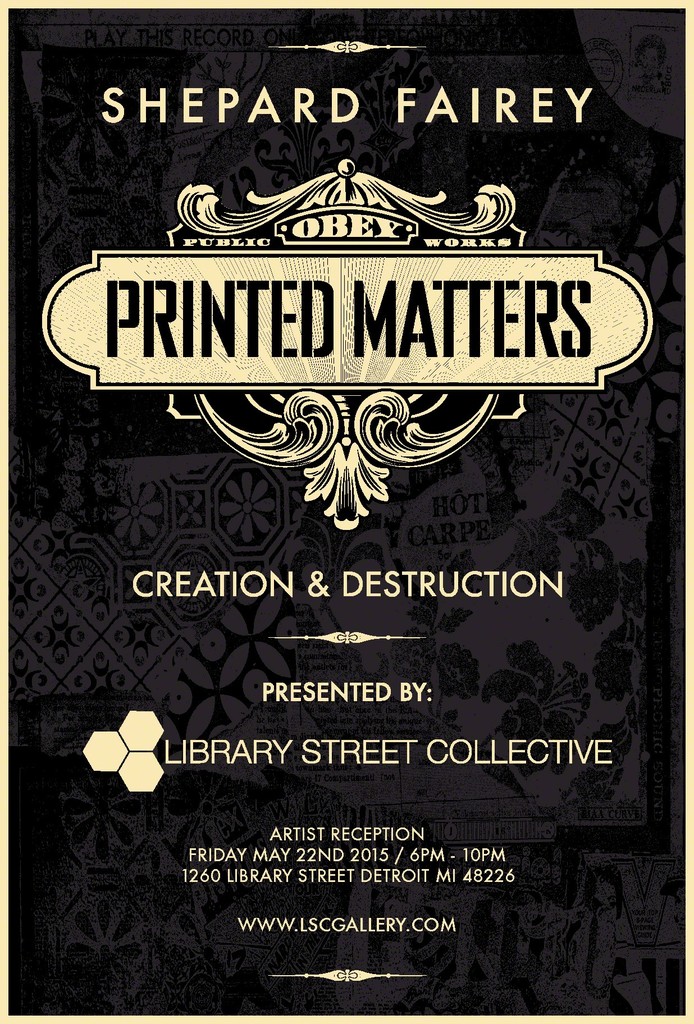 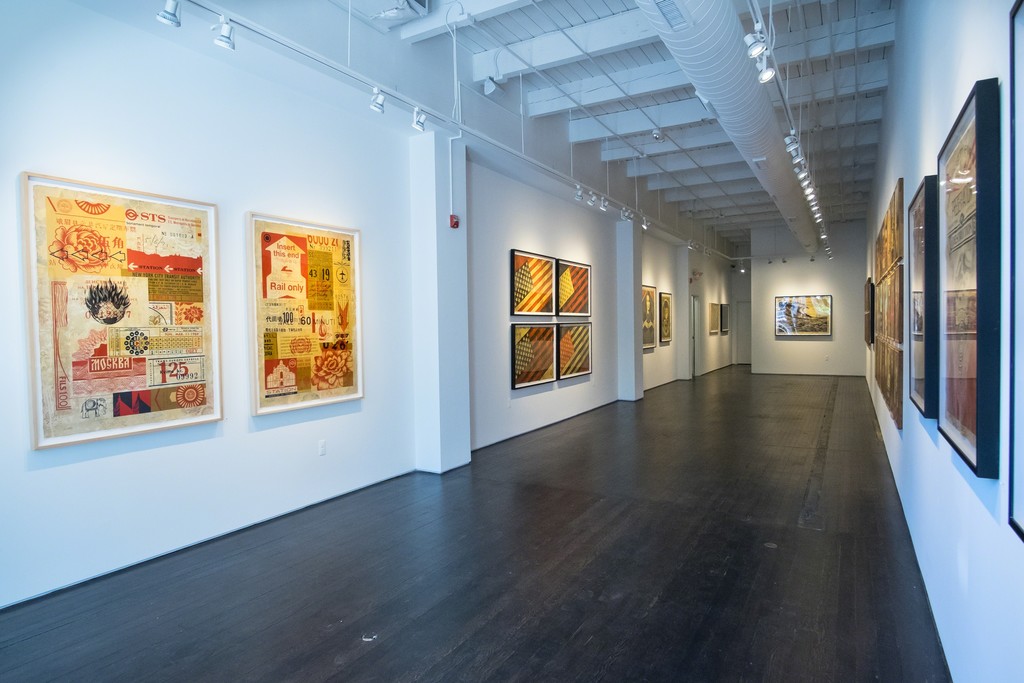 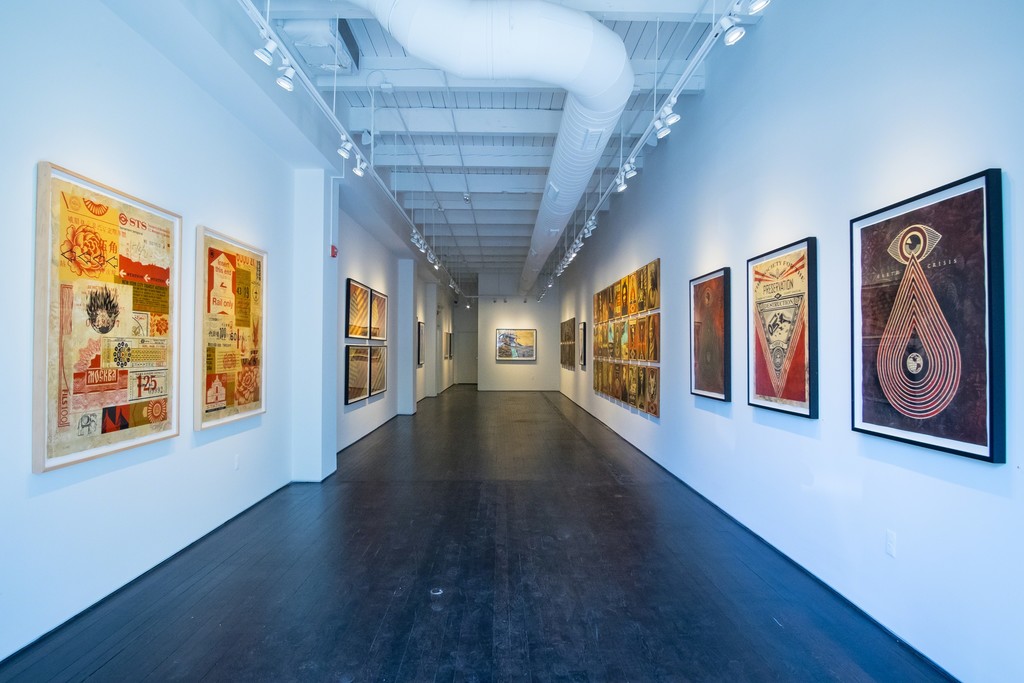 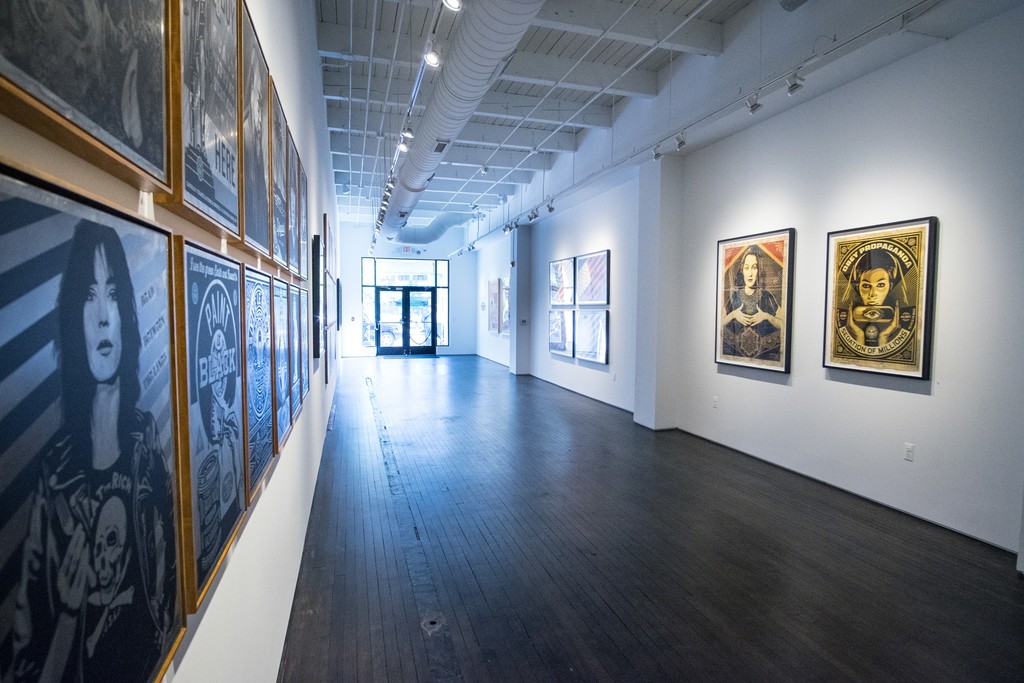 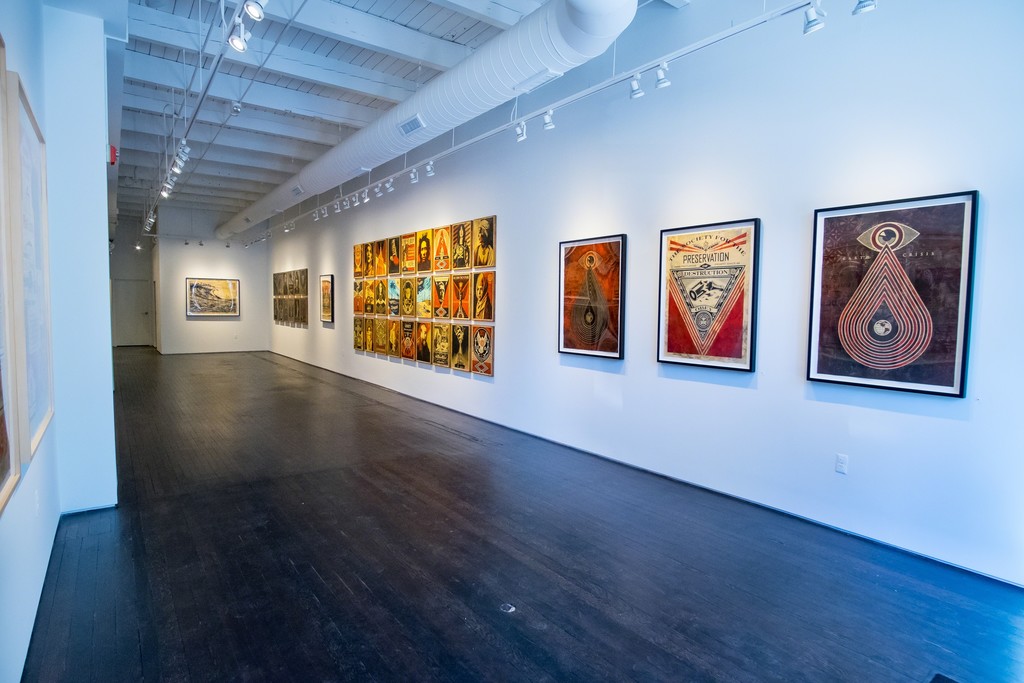 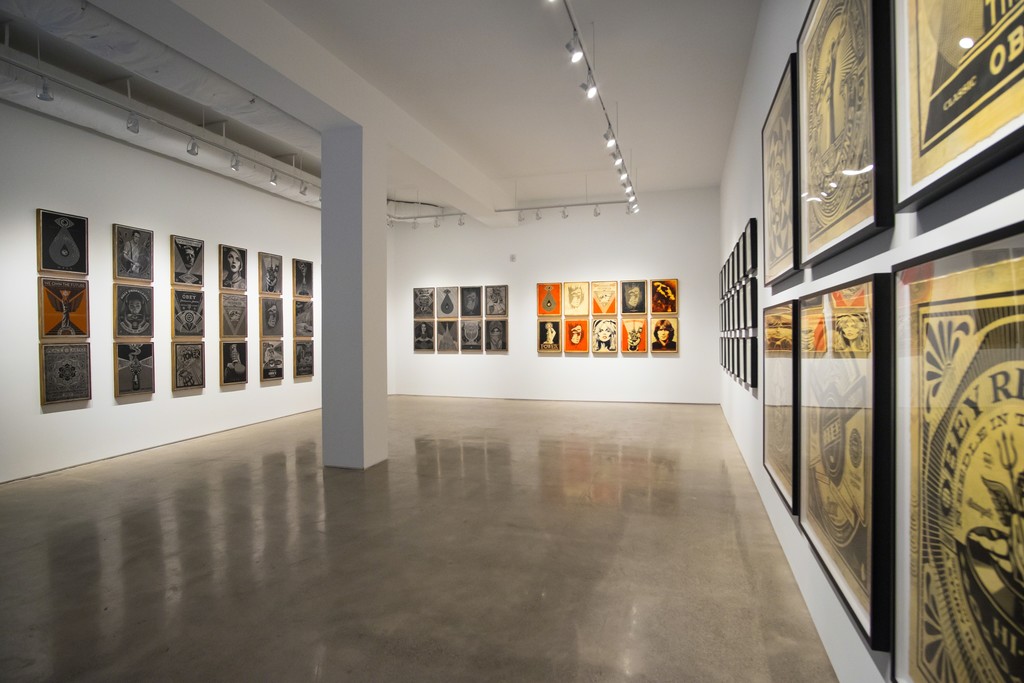 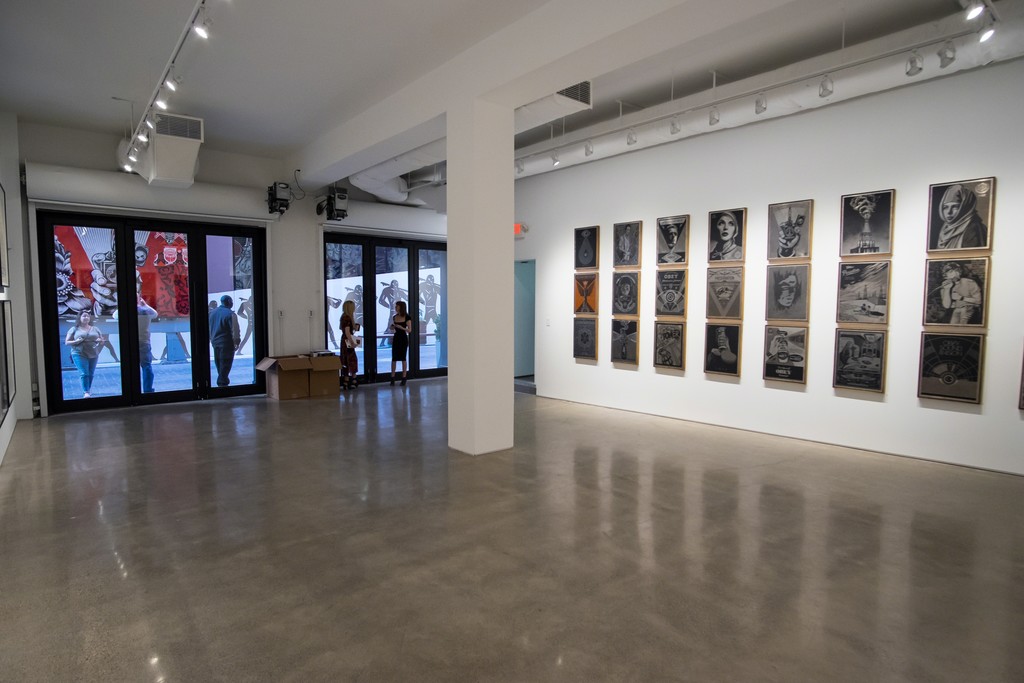 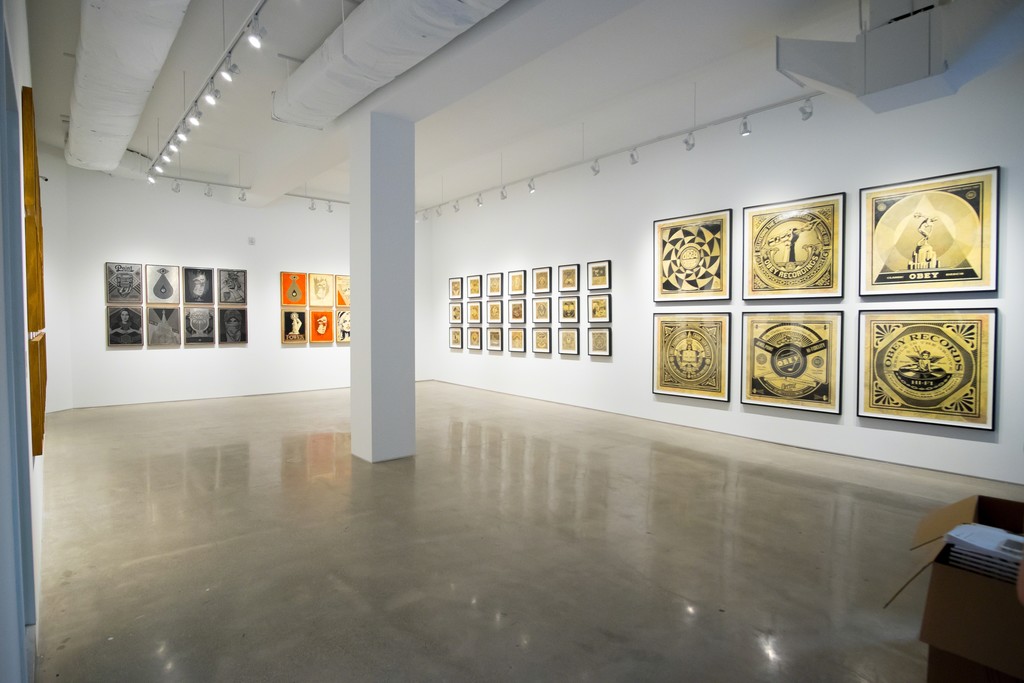 Library Street Collective is pleased to present Printed Matters, a solo exhibition featuring the work of renowned artist Shepard Fairey, who will return to Detroit for the first time in over a decade. Printed Matters is a continuous series of exhibitions, which focuses on the importance of printed material in Fairey’s art. Each exhibition highlights this significance by incorporating a variety of Shepard’s printed material, including serigraphs on paper, editions on wood, editions on metal, and fine art collage. For its next installment, Printed Matters will exhibit in Detroit, Michigan at Library Street Collective (1260 Library Street) and will be on view from May 22nd –August 15th, 2015. Additionally, the Printed Matters opening will coincide with Library Street Collective’s “Public Matter” exhibition located behind the gallery. Shepard will be the second artist to exhibit his work in “Public Matter,” the outdoor exhibition platform located in the Belt. Public Matter features a rotating exhibition of large-scale paintings by the most recognized and celebrated names in contemporary art. Shepard will also paint a permanent mural in the Belt as well as his largest mural to date in an undisclosed location in downtown Detroit.

Printed Matter: Repetition, consistency, and persistence over the years yielded a growing audience for both Shepard’s outdoor and gallery art. As people started to request more versions of his images, he began to embellish upon his utilitarian printing techniques by printing on wood, metal, and canvas, as well as incorporating stenciling back into the work. Some of these pieces began to function as one-of-a-kind mixed media paintings. To keep his work affordable and accessible, Shepard also made screen-print-on-paper editions of his fine art pieces. “Some people say print is on its way out, that it will be wiped out by digital media,” says Shepard, “but I say you can never replace the provocative, tactile experience of an art print on the street or in a gallery. Printing still matters.”

Shepard states, “I’m a product of the era of mass production and the mass culture it has created. I can’t imagine my art practice without the influence of, and the use of, printing. Some of my biggest art influences were not paintings, but printed things like album covers, skateboard graphics, punk flyers, and t-shirt designs. When I discovered stencil making and screen-printing in high school, I used them to make t-shirts and stickers, but by college I began to use screen-printing to make art. I enjoyed illustration, photography, collage, and graphic design separately, but with screen-printing I could synthesize those techniques into an integrated final product. Screen-printing also provided latitude for experimentation and the ability to make multiples, and my style began to evolve as I explored the graphic nature of the medium. I tried to make images that would translate well to screen-print production. A harmony of beauty, power, and utility was my goal.”

Public Matter: Shepard, a popular proponent of public art, will create five large-scale paintings as part of “Public Matter,” the fully accessible outdoor exhibition platform located between the Z parking garage and within the Belt, a newly redeveloped alley connecting Grand River and Gratiot Avenue between Broadway and Library Street in downtown Detroit. The Belt, named for its orientation in a former downtown garment district, also features permanent murals by more than a dozen local, national and international artists. “Everyone can relate to Detroit’s struggle as a community and understand the need for people powered projects in the city,” says Shepard. “Murals and public art are free to everyone and create energy and positive impact in communities; the art becomes a conversation starter or common reference point and that is good for public morale and discourse.” ­­

“Street art is one of the most democratic outlets for art. I consider myself a multi-platform artist, not just a street artist, but the audience I found through street art has created many of the opportunities I now have on other platforms and allows me to get my art directly in front of people, even if it is for a short time.” — Shepard Fairey ­­­­

“Shepard Fairey’s work has had a cultural impact on the world. We are honored to bring this exhibition to Detroit and also provide a public platform for him to create while in our great city.” — Anthony Curis, partner, Library Street Collective

Contact [email protected] for more information on this exhibition and Shepard Fairey's upcoming involvement in Detroit.

Shepard Fairey
Shepard Fairey is the artist behind OBEY GIANT, the graphics that have changed the way people see art and the urban landscape. What started with an absurd sticker he created in 1989 while studying at the Rhode Island School of Design, has since evolved into a worldwide street art campaign, as well as an acclaimed body of fine art. The OBEY GIANT campaign is rooted in the DIY counterculture of punk rock and skateboarding, but it has also taken cues from popular culture, commercial marketing and political messaging. Fairey steeps his ideology and iconography in the self- empowerment of those who refuse to be manipulated by the machine of manufactured consent. With biting sarcasm verging on reverse psychology, he goads viewers, using the imperative “obey,” to take heed of the propagandists out to bend the world to their agendas. Fairey’s art reached a new height of prominence in 2008, when his “HOPE” portrait of Barack Obama became the iconic image of the presidential campaign and helped inspire an unprecedented political movement. The original image now hangs in the Smithsonian Institution’s National Portrait Gallery in Washington, D.C. As Fairey’s body of work reached its 20-year mark in 2009, the Institute of Contemporary Art/Boston honored him with a full-scale solo retrospective, which drew a record number of visitors for the museum. Entitled Supply and Demand, the exhibit shares its name with Fairey’s career-chronicling book. After its time in Boston, the Supply and Demand exhibition made additional runs at the Andy Warhol Museum in Pittsburgh, PA, and the Center for Contemporary Art in Cincinnati, OH, also breaking attendance records in both museums. In May 2010, Fairey unveiled a new collection of work, entitled MAY DAY, through Deitch Projects as the world-renowned gallery’s final project. In 2011 Shepard was featured in theArt in the Streets exhibition at the MoCA Geffen in Los Angeles and in 2012 he had his first solo exhibition in London in 5 years, entitled Sound & Vision. Fairey had his first major exhibition in his hometown of Charleston, S.C. at the Halsey Institute of Contemporary Art alongside Jasper Johns in May of 2014 and in 2015 he has a scheduled solo exhibition at the CAC Malaga, Spain. In addition to his guerilla street works, as of 2014, Fairey has painted more than 43 large-scale murals around the world.