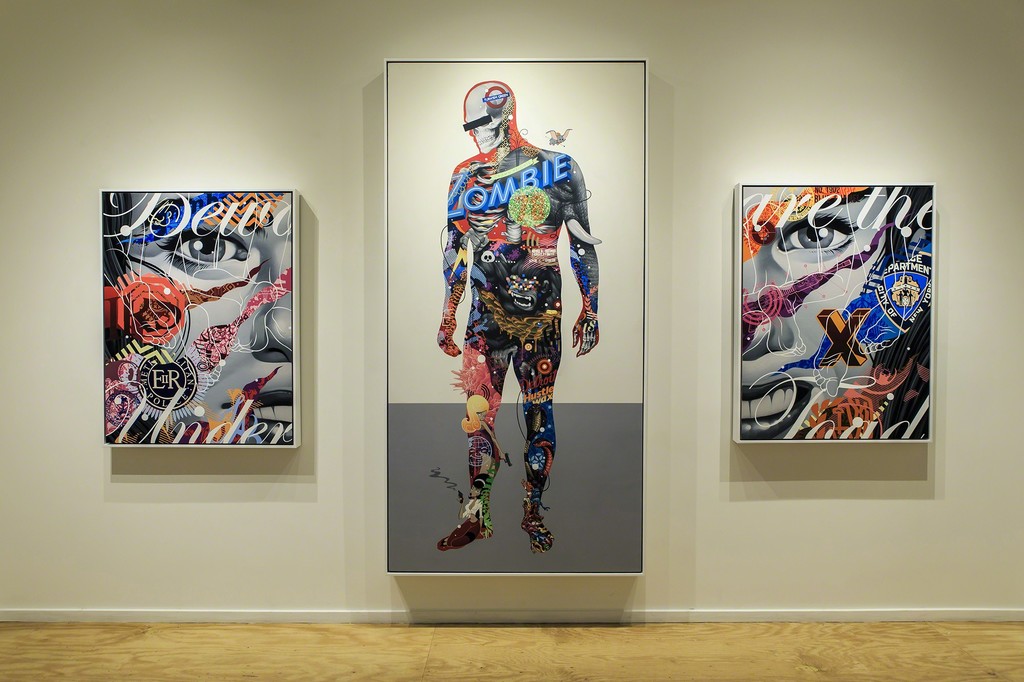 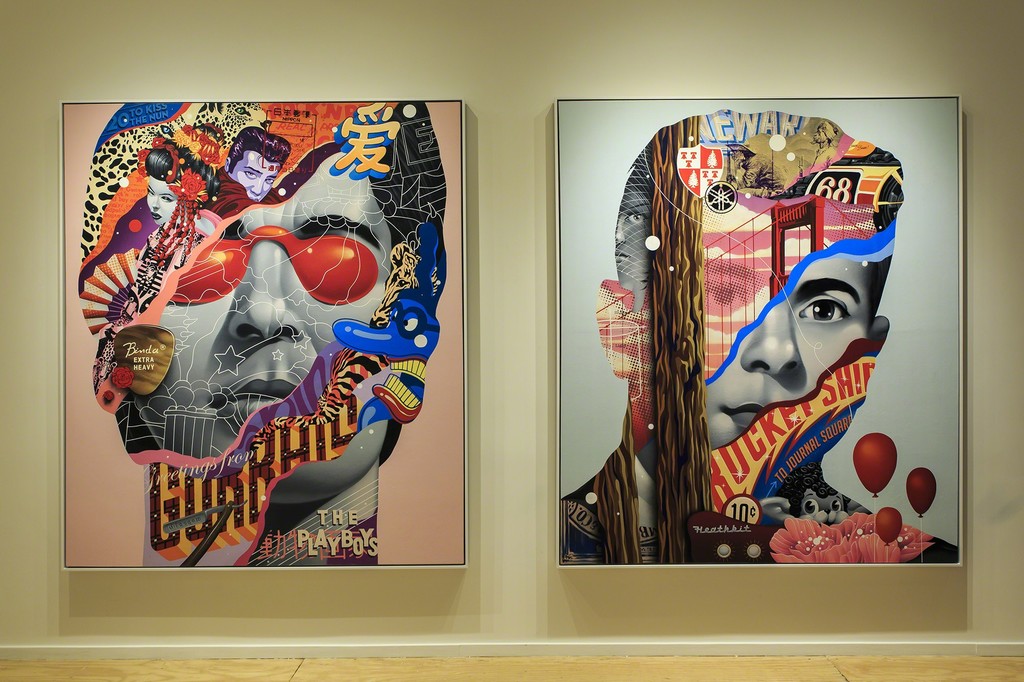 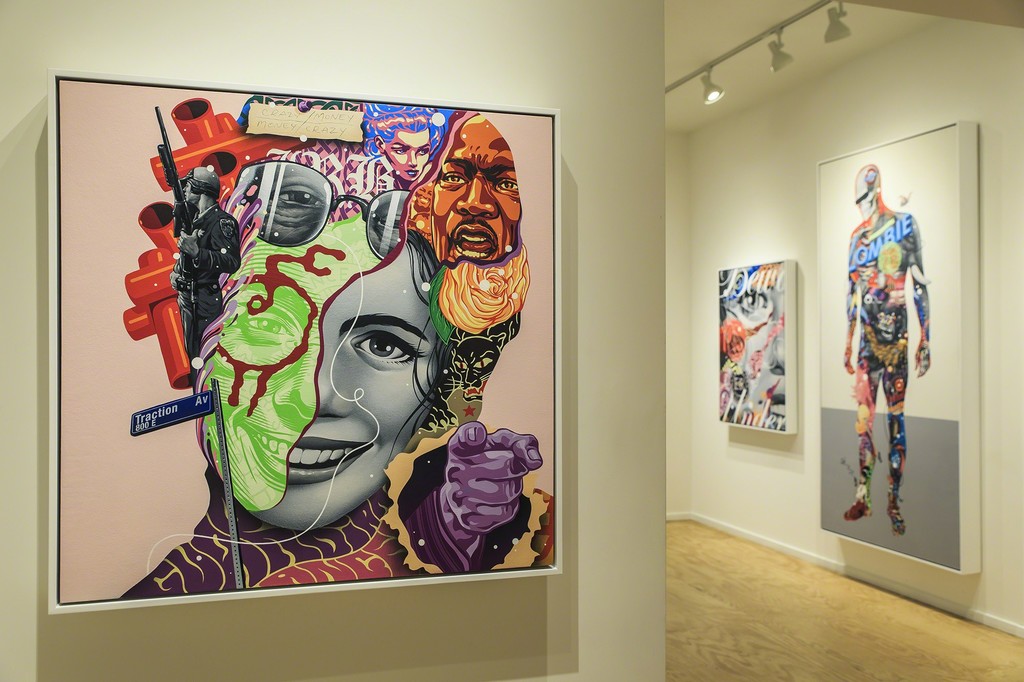 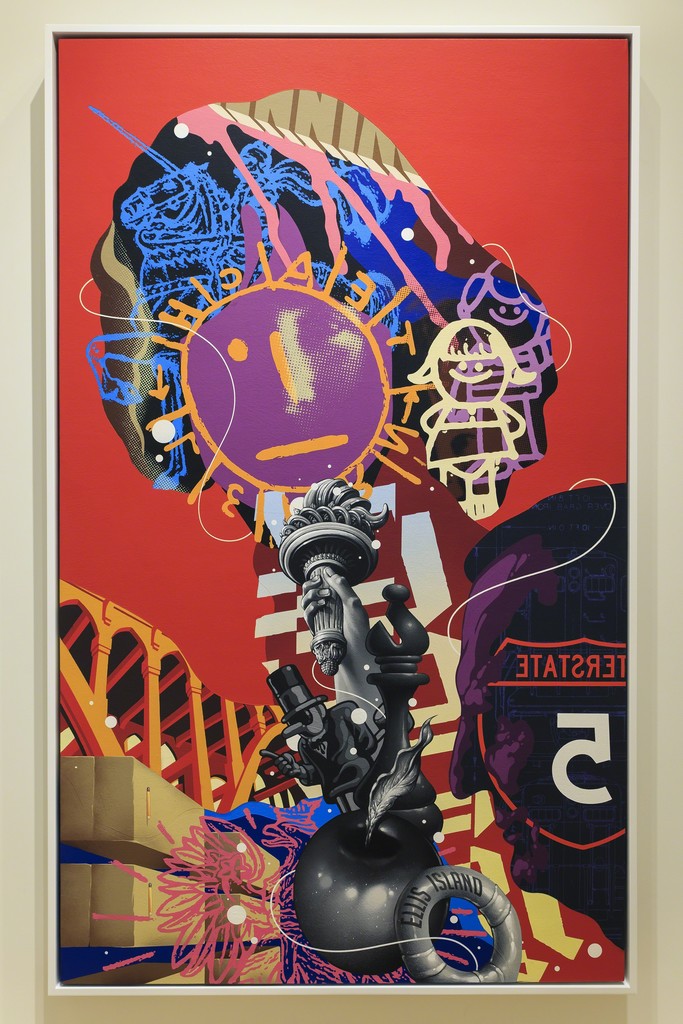 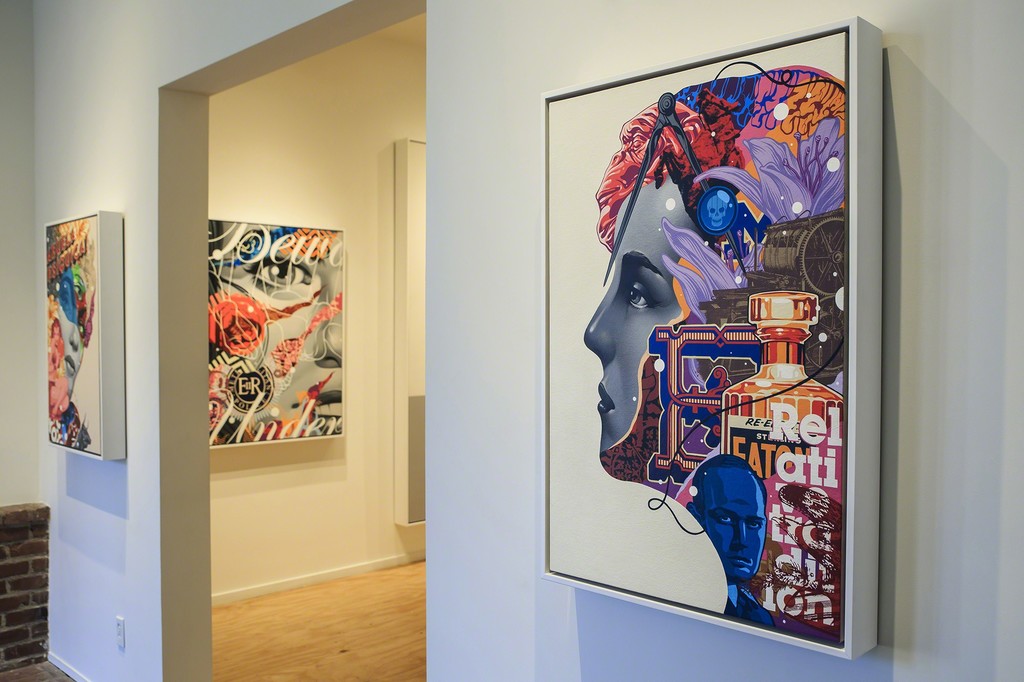 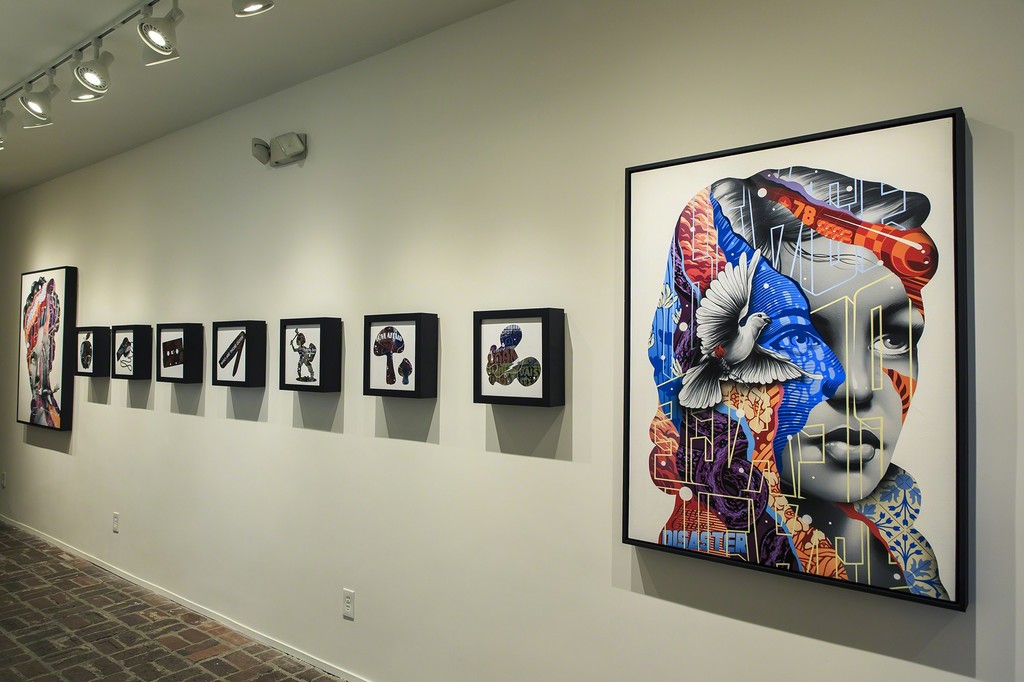 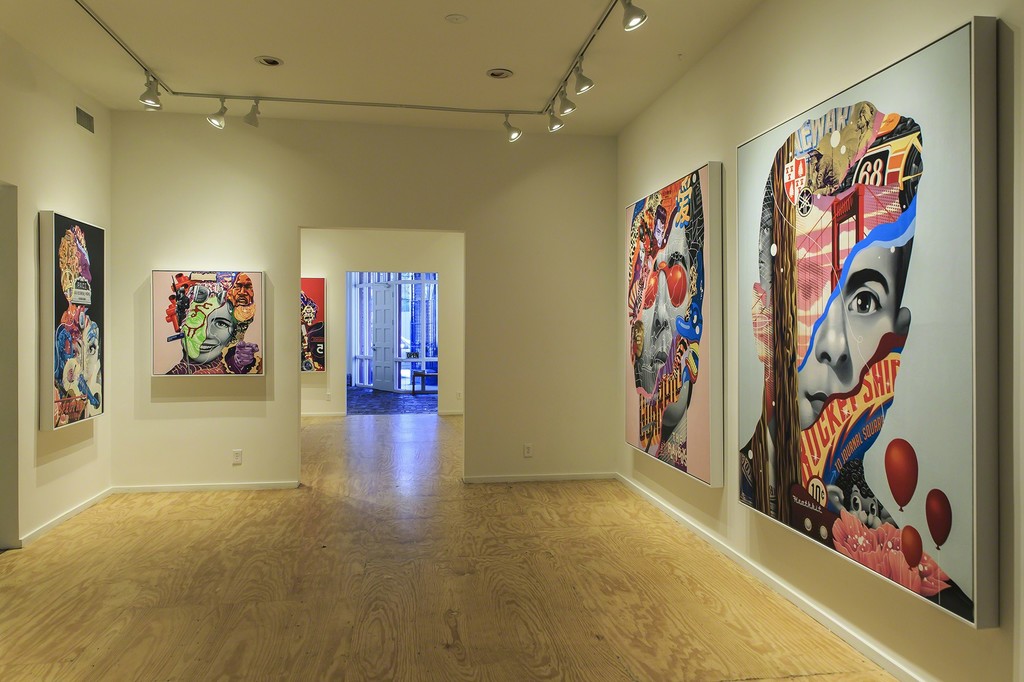 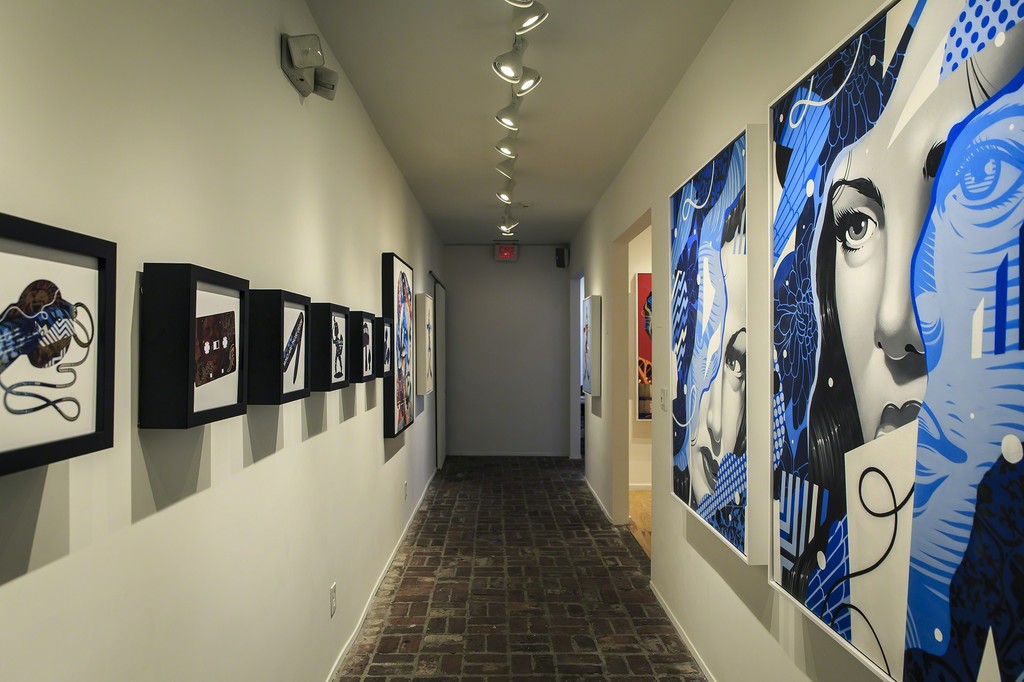 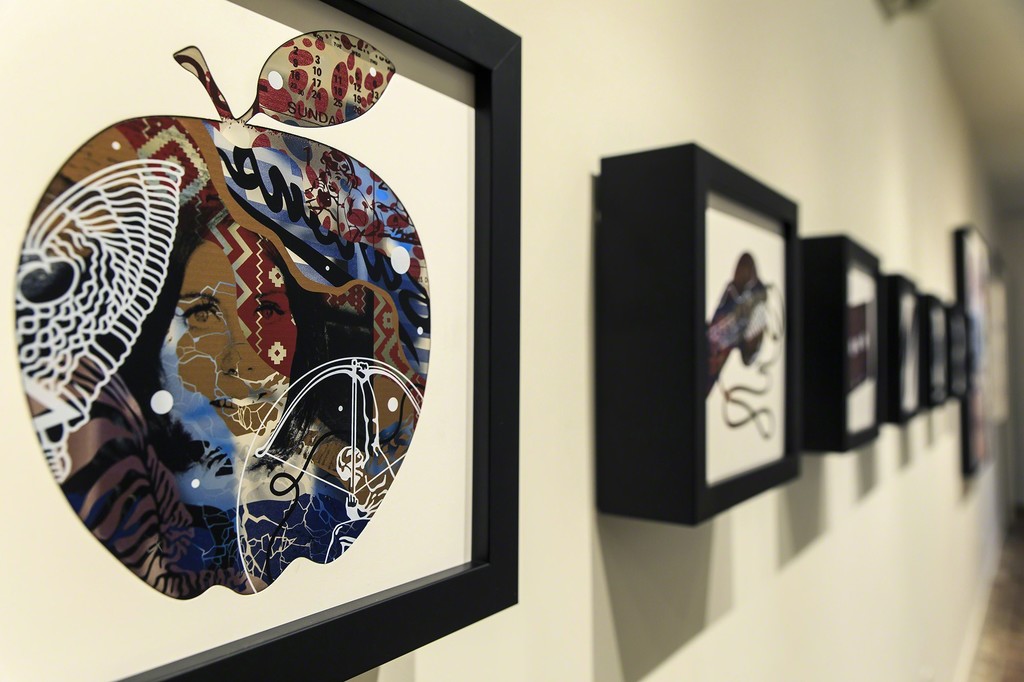 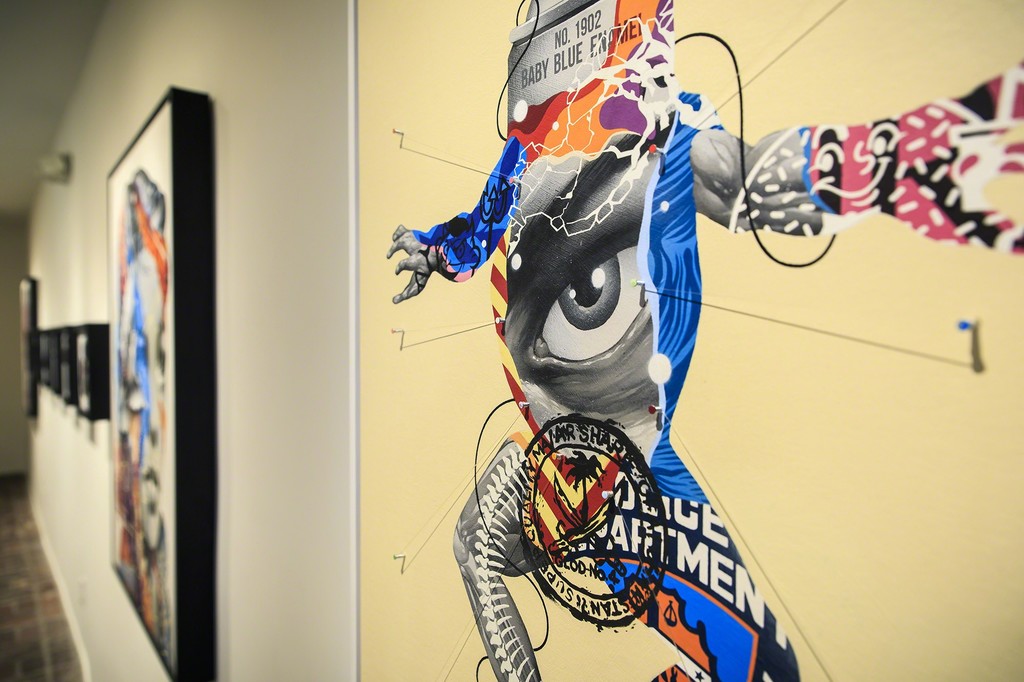 Detroit-based contemporary and fine art gallery, Library Street Collective, is pleased to announce “Legacy,” a solo exhibition of new work by Tristan Eaton. In this exhibition, Hollywood-born Eaton explores the topic of “legacy,” in his most personal and introspective exhibition yet. Eaton looks for ways to pay respect to those who came before him and honor their legacy for infinite generations to-come, with a captivating array of paintings and fabricated metal print works. The canvas works include mixed-media portraits of spray paint, acrylic and silkscreen, involving patterned, symbolic and metaphoric layers inspired by audio interviews the artist conducted with nearly a dozen people who have played an important role in his life.

“A common challenge we all share is adequately describing a loved one to people that never knew them,” Eaton says on his first solo show in the United States in nearly a decade. “It’s so important to pass on the legacy of those you love to your children and grand children but also to the whole world. The sharing of human stories is an ancient tradition that bonds us closer together as people. As a result, we understand each other more deeply and become stronger better people when the context of our legacy is clear. The people that came before me made me who I am, and I intend to pass along their stories and strengths by creating this ‘time-capsule’ of an exhibition that honors their legacy and preserves their stories for generations to come.

To create the core works for the exhibition which are detailed, abstract portraits, Eaton picked up one of his father’s hobbies as inspiration. “One of his great loves was to listen to life stories. He would sit with someone for hours, take their photograph and ask them never ending questions about their lives.” Eaton conducted similar audio interviews with a select group of people which have been mastered and made public for exhibition viewers to hear in conjunction with the show via Eaton’s website, to further illustrate the visuals. “These stories started out as a simple time-capsule. An audio record to inform the visual portrait. But as the stories poured out, I realized that they were entertaining in their own right. From Oscar winners to civil rights warriors to religious cults, there is a lot to draw from as an artist, but the stories remain strong on their own.’”

The depth of the work is thorough and thoughtful. For example, a portrait of Eaton’s mother, in which elements of her portrait show the brick wall pattern in front of the artist’s childhood home and a pattern from his father’s favorite sweater. Every single element has meaning and every image is a metaphor or symbol linked to the intriguing back story of the subject.

“Legacy” is a highly personal and revealing body of work for Eaton. The artist rarely creates such ambitious works and has spent the last 5 months researching and meticulously painting this detailed, abstract, collection of family portraits.

Other highlights of the exhibition include Eaton’s first ever self-portrait, the highly anticipated release of his first Art Book ‘The Murals of Tristan Eaton’ which documents his many ambitious, international mural projects and the release of his limited edition ‘Art Can’ produced by Montana Spray Paint.

Eaton achieved acclaim and success as an artist very early in life. As a teenager he designed toys for Fisher Price and went on to gain an international fan base as the founding Art Director for Kidrobot. His designs for Kidrobot (The Dunny & The Munny) went on to be included in the MOMA Permanent Collection. While painting in the streets on New York City, Eaton started the popular Creative Agency Thunderdog which consulted such clients as Nike, Barack Obama and Rockstar Games. While paying the bills, Eaton always maintained a presence in the world of street art and graffiti. In 2009, he created the notorious guerrilla art group TrustoCorp and has since gone on to be one of the most in demand muralists on the planet. His powerful, hyper-color murals can be seen in over 13 countries worldwide and have set the standard for large-scale, spray painted, mural works.

Library Street Collective specializes in cutting edge modern and contemporary fine art with a primary focus on artists who have developed their skills and visual art in public spaces. Our mission is to share what we believe to be some of the most important and inspiring art today. Located in the heart of downtown Detroit, Library Street Collective continues to cultivate a culture of exploration and art appreciation. In addition to exhibiting the works of countless international artists in its Detroit gallery and abroad, Library Street Collective has curated numerous public art initiatives many of which can be found in the city of Detroit.

Born in Los Angeles in 1978, Tristan Eaton has spent his entire life pursuing art and design; from illegal Street Art to the permanent collection of the Museum of Modern Art (MOMA), Eaton has definitely made his mark.

From an early age Eaton became immersed in comic books, skateboarding and graffiti culture, leading to his first toy design for Fisher Price at the age of 18. Having founded his design studio Thunderdog shortly after attending the School of Visual Arts in New York City, Eaton spent the next two decades building an impressive portfolio of artistic achievements including iconic toy designs for Kid Robot, campaign posters for Barack Obama, animated TV shows for Disney, founding the guerrilla art group TrustoCorp and innumerable commissions for clients such as Nike, Converse, and Versace. This wide range of work has made him a leader and influencer to a global fan base and made his art sought after by a loyal group of celebrity clientele. After calling London, Detroit and Brooklyn home for many years, Eaton currently finds himself back in Los Angeles where he pursues fine art and large scale mural works full-time. In the last few years Eaton has undoubtedly become one of the most sought after and prolific artists in the street art and mural movement that has taken the world by storm. In 2014 alone, Eaton painted murals in over 13 countries with his signature psychedelic color palette and graphic, collage aesthetic. Eaton’s work has been celebrated globally from the Paris Catacombs, to the streets of Kingston, Jamaica and he has no intention of slowing down anytime soon.