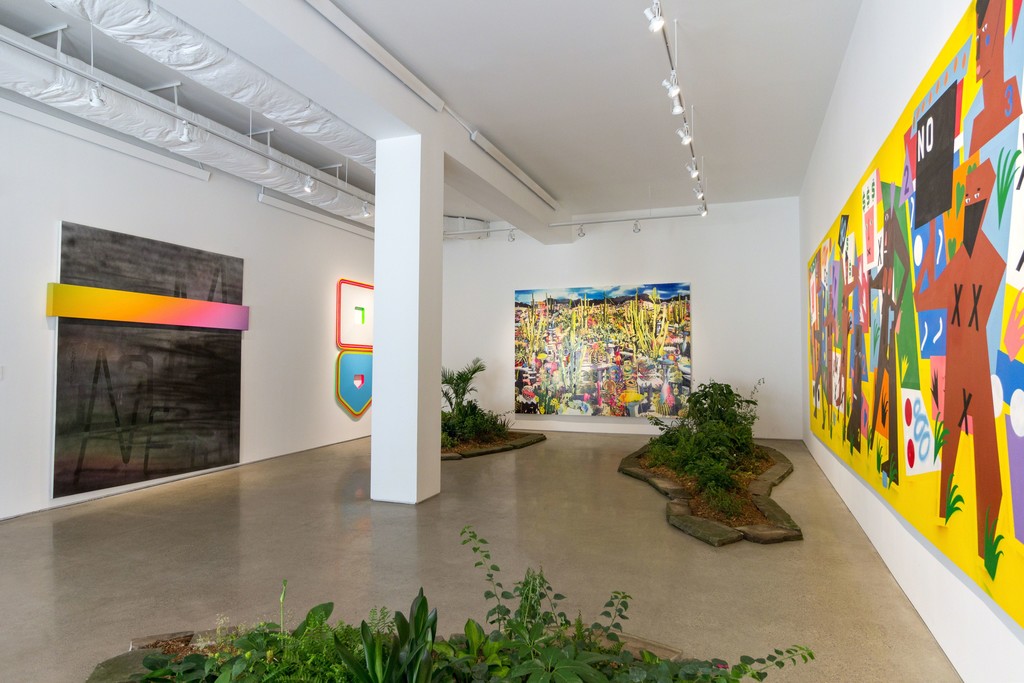 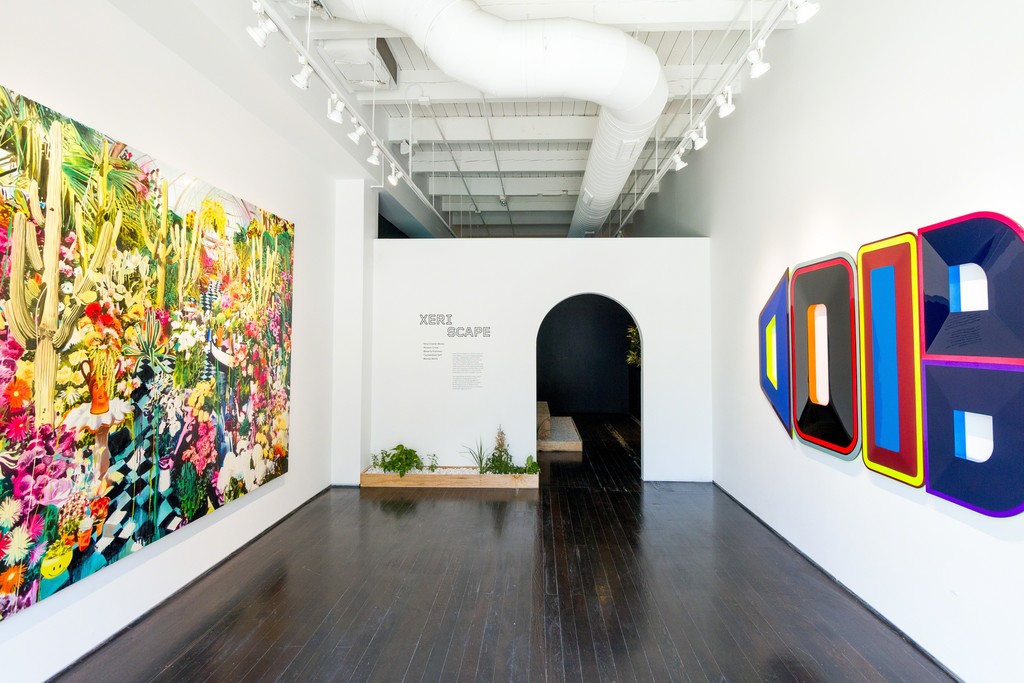 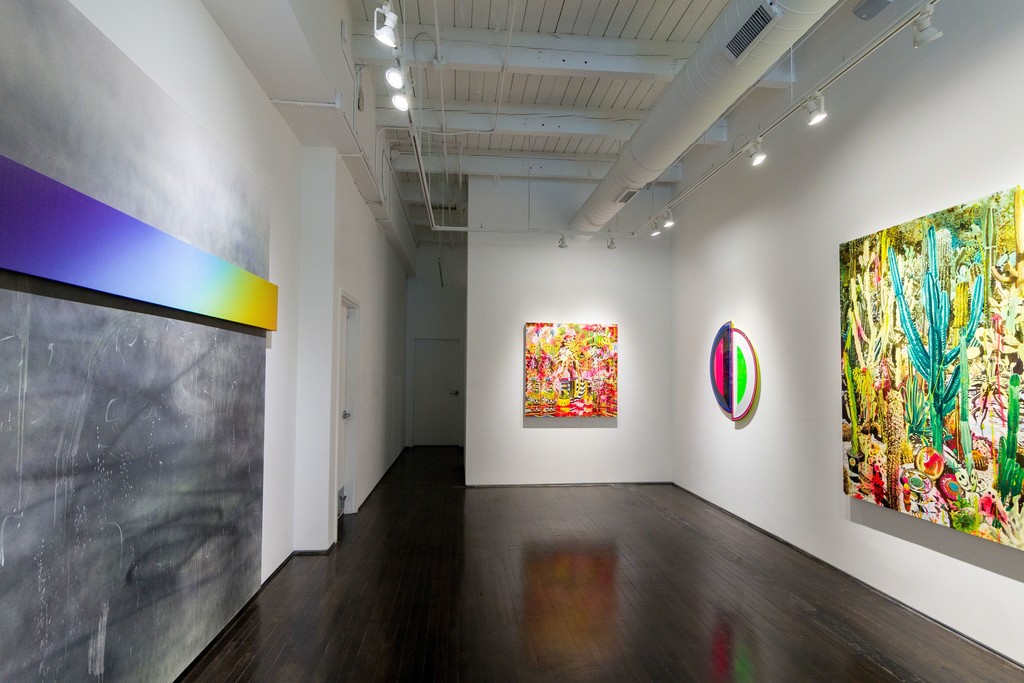 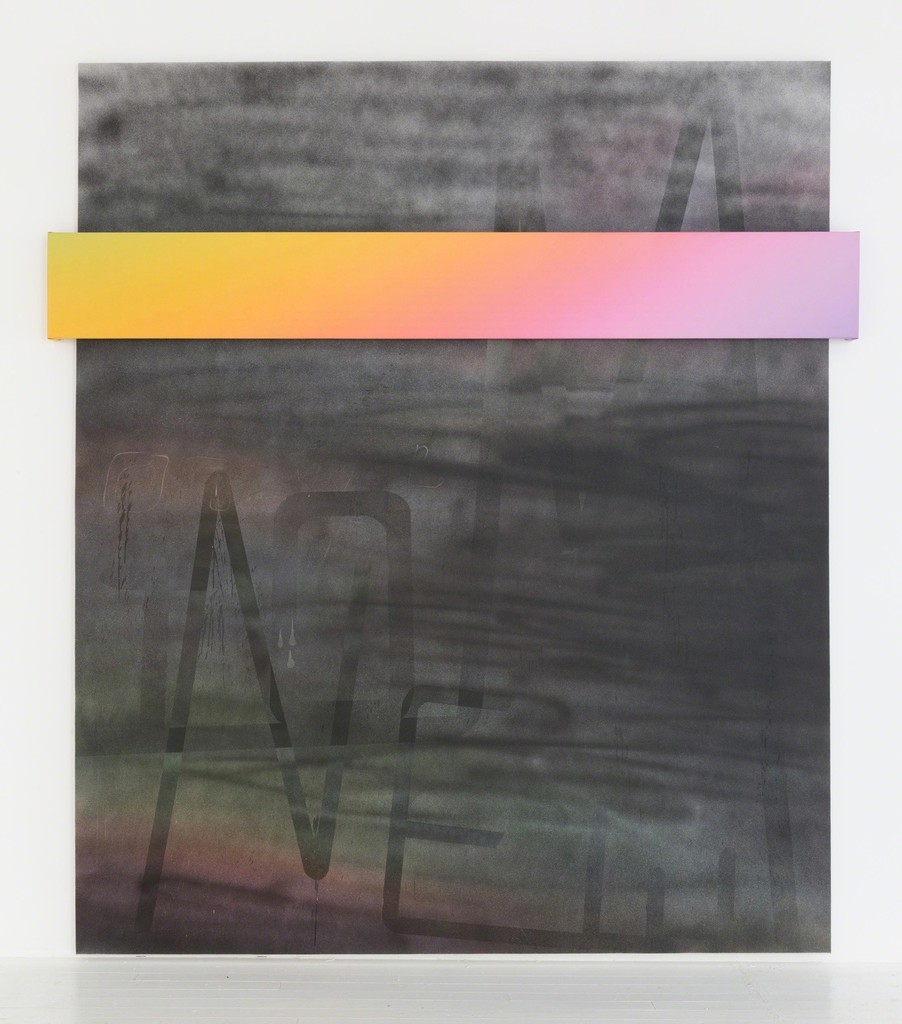 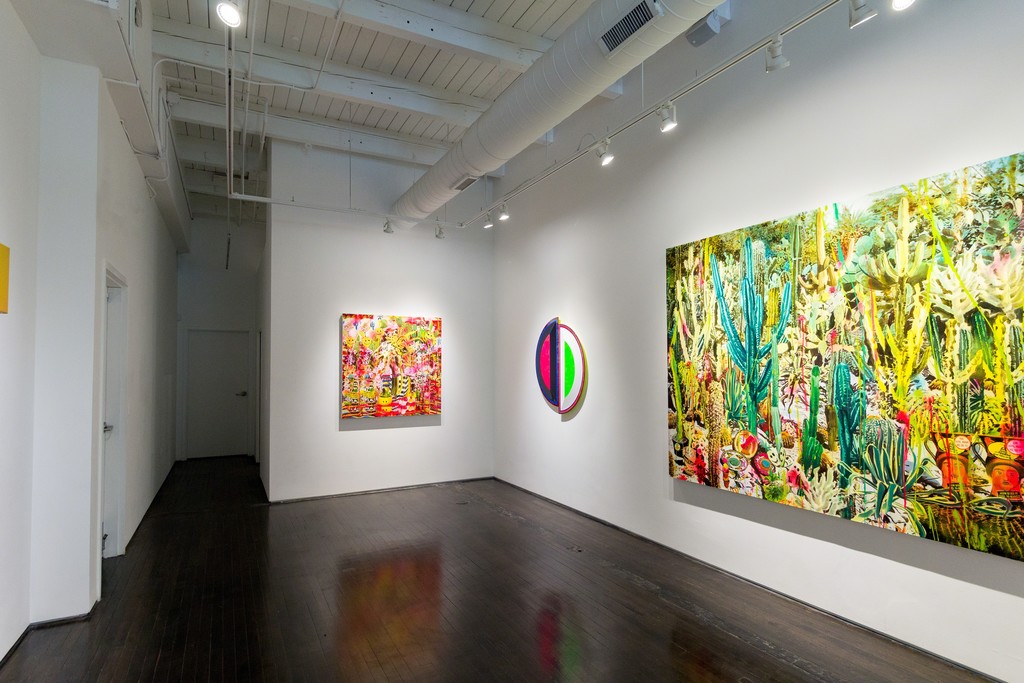 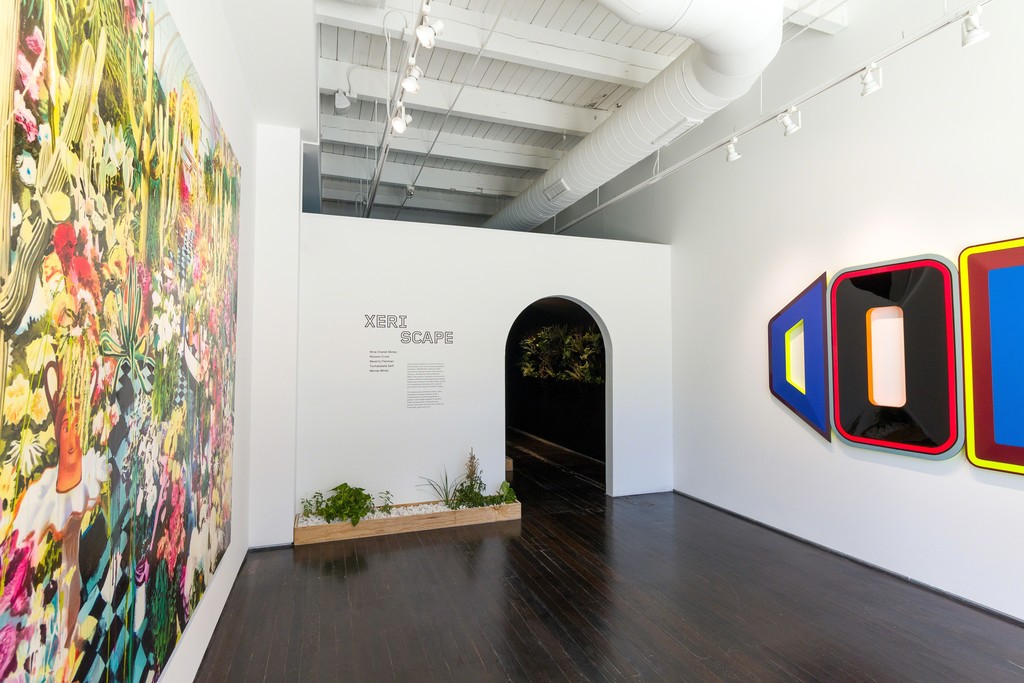 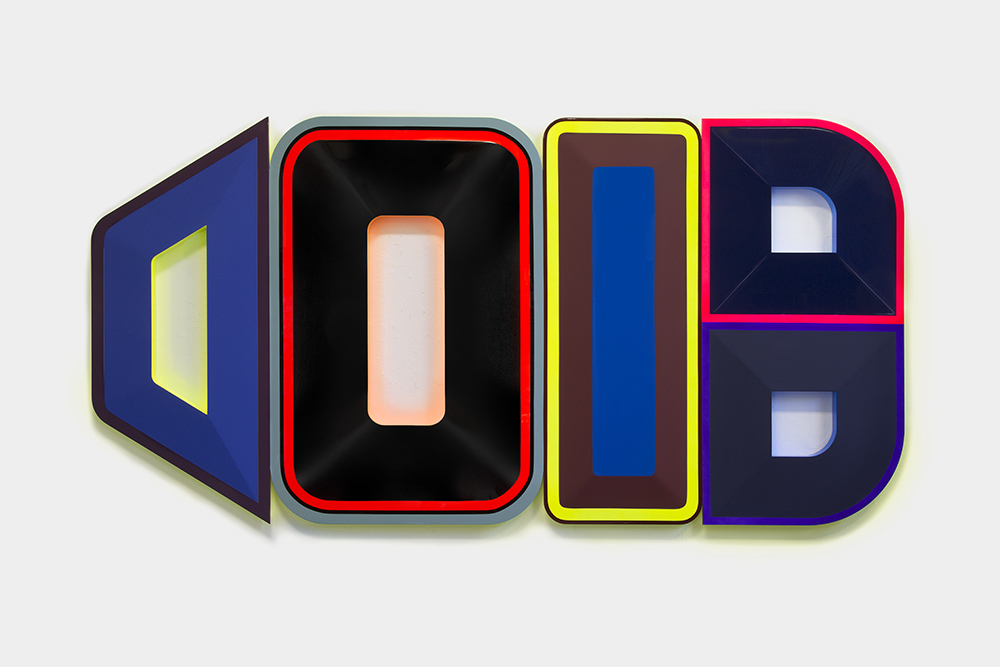 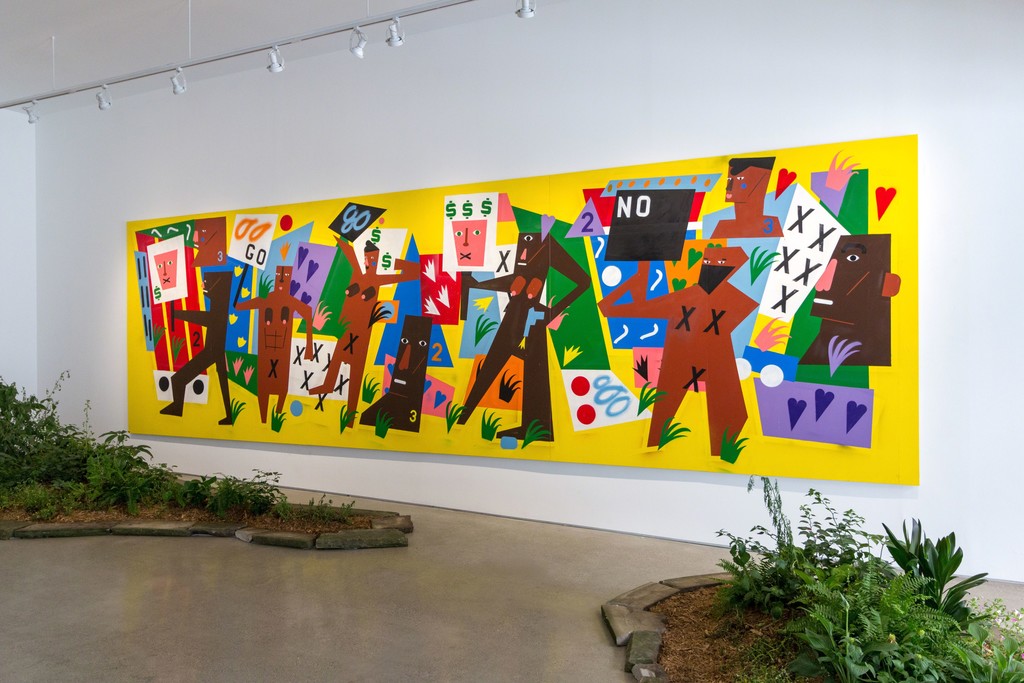 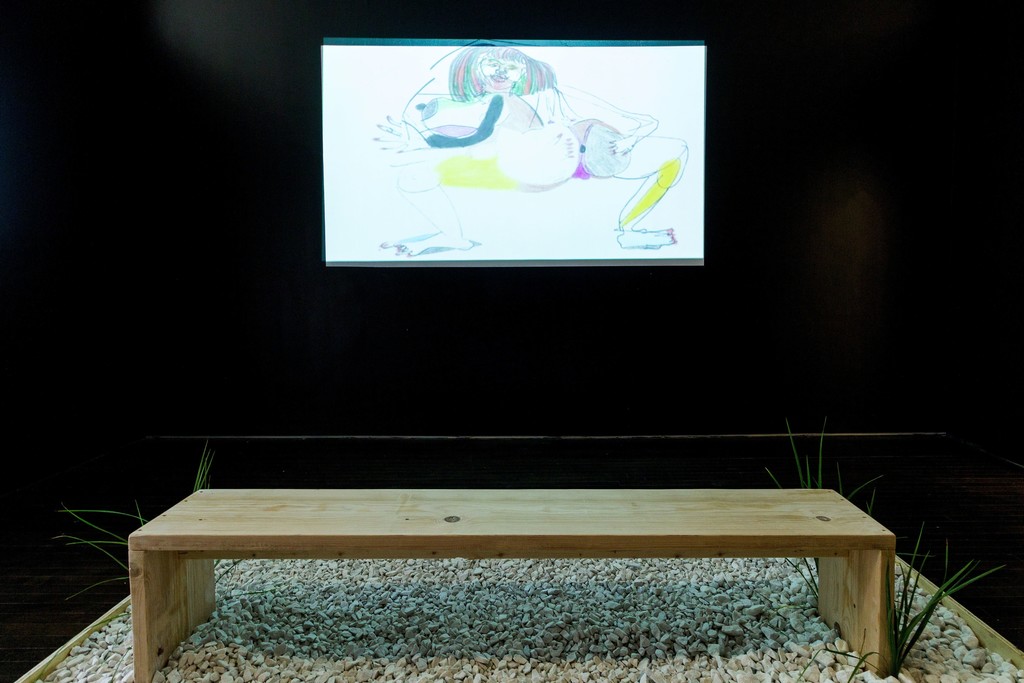 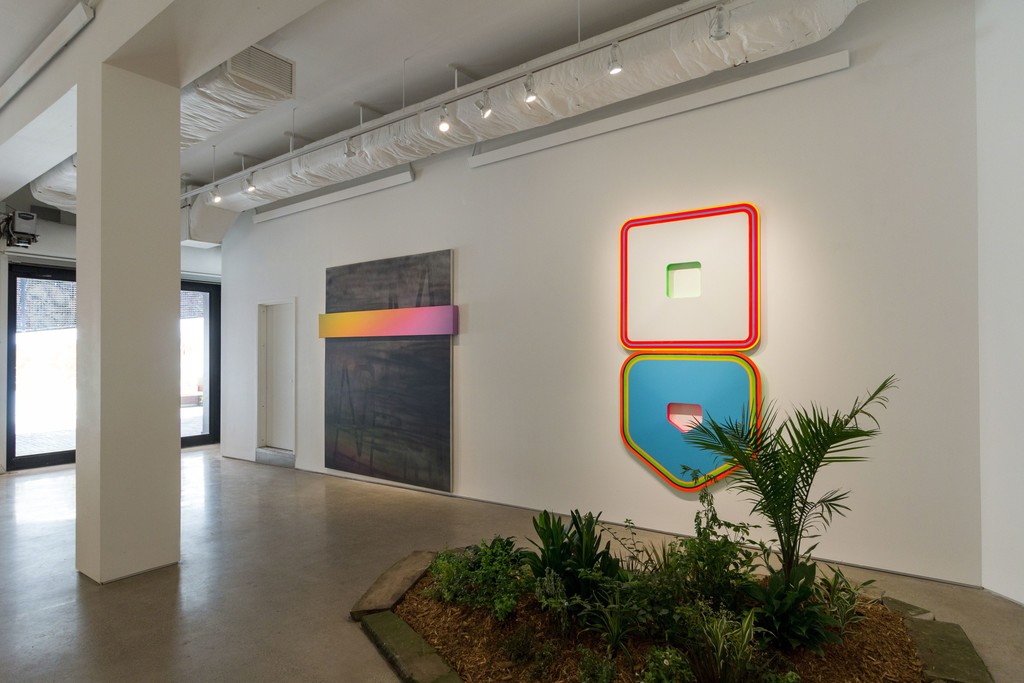 Library Street Collective is excited to announce this year’s iteration of Public Matter and its accompanying gallery exhibition, Xeriscape, featuring artists Nina Chanel Abney, Rosson Crow, Beverly Fishman, Tschabalala Self and Wendy White. The summer exhibition will connect the outdoors with the inside spaces by bringing large scale artworks to the Belt Alley, as well as incorporating elements of the natural world within the interior exhibition design. This adept group of female artists - each considered a strong member of the contemporary art world regardless of gender - are brought together to present varied perspectives on gender, race, identity, materiality, space and form.

Nina Chanel Abney
Nina Chanel Abney employs frenetic abstraction, social advocacy and black identity in her canvasses and murals. As part of the Rubell Collection’s '30 Americans' exhibition (which visited the Detroit Institute of Arts in the fall of 2015), Abney’s graduate school works were among some of the most talked about, propelling her to early recognition among the company of David Hammons, Kara Walker, and Jean-Michel Basquiat. Titled 'Class of 2007', her largest work in the travelling exhibition depicted her MFA class at Parsons School of Design, envisioning the artist as a gun-carrying blonde prison guard and her white friends as black inmates. She was the only African-American in the group and saw parallels to the overwhelmingly black population in America’s prison system. An insightful piece that garnered mixed reactions from her friends (“Some laughed, others thought I was mad at them”), the work had the impact of transfiguration, placing the white students in black bodies with detailed physical likeness to connect them to their new form.

'Class of 2007' set the stage for Abney’s career, and it has been picking up speed ever since. As it tends to after graduation, her style has evolved but her messaging has remained just as powerful. Her figures have been further abstracted to crucial shapes, and the movement and narrative action in her compositions has been elevated to dissect issues of race, sexuality, religion and gender. In 2017, the Nasher Museum at Duke University presented Abney’s first solo museum show ('Royal Flush'), surveying 10 years of her work. “By engaging loaded topics and controversial issues with irreverence, humor and lampooning satire, Abney’s works are both pointed contemporary genre scenes as well as scathing commentaries on social attitudes and inequities” writes Marshall N. Price, the exhibition’s curator. He notes that as an artist of the newest generation raised on screens, Abney loads her works full of visual data in order to convey an overabundance of news, media and popular culture - an unavoidable and timely influence in her aesthetic language.

Rosson Crow
Texas born and LA-based, Rosson Crow creates densely layered panoramas on a massive scale. Incorporating everything from shop aisles and neon signage to discarded beer cans and bumper stickers, her work is definitively LA and amends the concept of landscape as ‘trees-mountains-river’. In her short but intense career, a skillful depiction of space has engaged intricately stratified deserts, scenes from key places in American history, and California’s landmarks of iconic cult status. The artist herself is as timeless and multi-dimensional as her works, obsessed with Americana and historical misremembering and simultaneously on the pulse of contemporary art and culture.

Crow earned her MFA at Yale and later spent time in Paris before relocating to the west coast of California, which reminded her of her home state of Texas. With plenty of space to work and inspiration to draw from, her work grew in size. Early pieces from this time began her nod towards counter culture and spirituality, and her fascination with the dark history of figureheads of American politics and revolution. One work imagined an enigmatic space staged for the seance of JFK; while others fantasized the life and times of Madame Psychosis, a fictional woman obsessed with a false belief in her presence at the late President’s assassination. Crow’s works paint a vivid scene, yet the most important details are left to the imagination; in each and every painting, we know something momentus has - or has yet - to occur.

All set stage, oversized, and meticulously detailed, the works both entice disorientation and compel the viewer to step inside. A recent exhibition at the Museum of Contemporary Art Tuscon, titled 'Westification', brought together a collection of desert scapes and her most expansive works to date. Brightly colored, they present dense strata of cacti that glow hot and cold with the changing atmosphere. For Xeriscape, Crow has created 3 large new pieces in her unmistakable mix of photo transfer and paint, this time with the Belle Isle Conservatory as her muse. As with the desert works, discarded objects, tchotchkes and ephemera mingle within the plant life of the famous greenhouse designed by Albert Kahn in 1902 and inspired by London’s Crystal Palace.

Beverly Fishman
An artist with over 20 years of research into the pharmaceutical industry, Detroit-based Beverly Fishman is the Head of Painting at Cranbrook Academy of Art. Her evolving exploration of glossy, pill-shaped reliefs are created to attract immediate attention, mimicking the vigorous and persuasive tactics used by drug companies and their advertising agents.

Over 2 million Americans are fighting addictions to pharmaceuticals derived from opium, and medication for mood disorders and ADD/ADHD are currently as prevalent for mental illness as for recreational and occasional use. An eagerness to solve all our problems with a prescription points to a global dilemma that resonates on an ethical, social and emotional level for Fishman, who uses hue and texture in her wall reliefs to destabilize the viewer. She brightly paints the reverse of her works to cast a glow on the gallery wall, affecting a symptomatic buzz that radiates from each specimen. It is by transforming the iconography of medicine and translating it into the realm of art that Fishman forces us to consider our own attraction, revulsion, and dependence on Big Pharma.

Building on previous work that studied singular capsules and tablets, Fishman’s newest paintings illustrate the current trend of mixing multiple medications. In an effort to counteract the side effects of one drug, carefully calculated doses of another are used in the hopes of finding balance. Here the ‘doses’ - or the work’s arrangement of component parts - conceivably balance the prescription while visually balancing the painting’s composition.

Tschabalala Self
The work of Tschabalala Self holds a rare place in contemporary figurative painting, where she makes both formal and conceptual strides. Self uses and reuses paper as well as fabrics that she finds, sources, and pulls from her life and history: African fabrics collected by her mother, old clothes, curtains, and upholstery. While many artists feel a reverence for old works, she views each piece in its connection to where she has been and where she might go next; as such, pulling fragments from her life and earlier works feels organic.

Self’s practice includes painting as well as sculpture and animation, and is grounded in thinking about the experience of corporeality. She depicts the black female body in two dimensions, subverting the concept of shallow stereotypes and reclaiming the physicality of her figures; in doing so, she reintroduces the humanity that has been robbed from images of women - in particular, black women - throughout art history. Her works have drawn parallels to the curvaceousness of German Expressionism; poignancy of Kerry James Marshall; and the tactility and nostalgia of quilt-making. She critiques cliches of the black body as exotic, athletic and sexually powerful and turns these platitudes to advantage, in measure through the intense psychic connection between her figures. In addition, she examines the construct of the avatar in order to ground her work in the present day: “I think anyone dealing with figuration or identity now would have to imagine how that work would function in a virtual space, because so much of identity politics is centered around the internet.”

Wendy White
The art practice of Wendy White is thoughtfully paradoxical in its composition. Her focus on materials and her desire to break away from the rectangular two-dimensional surface references White’s early training as a sculptor. Bringing unexpected forms to her canvas complements the artist’s use of familiar logos and icons, which become layered visual cues that are simultaneously familiar and foreign.

White’s spirited body of work offers a timely and urgent respite from the weight of incessant political and social turmoil in modern media. She describes her work as “a hybrid experience: painting and sculpture smashed together with buildings and streets, how it feels walking around a massive city.” A continuous source of inspiration for the artist is her hometown of New York City, where the streets and structures of the urban landscape reveal small traces of its inhabitants. Hints of nostalgia also permeate many of her compositions; color field paintings punctured by logos and 8-bit icons will instantly trigger warmth for anyone who grew up in the 80s and 90s.

Particularly interested in what she calls “accidental aesthetic”, her body of work focuses less on precision and instead concerns itself with a utilitarian ethos. The continuous use, reuse, and reinvention of the city compels White to use hazy layers of paint in reference to the faded marks of New York’s citizens; and she adds sculptural awnings to her canvases in reference to the manufactured edges of buildings, signage and doorways. Without the apparent mark of the individual, the canvases open themselves up to interpretation that extends beyond a singular person’s experience, with hints of language and washed out backdrops as reminders of impermanence.