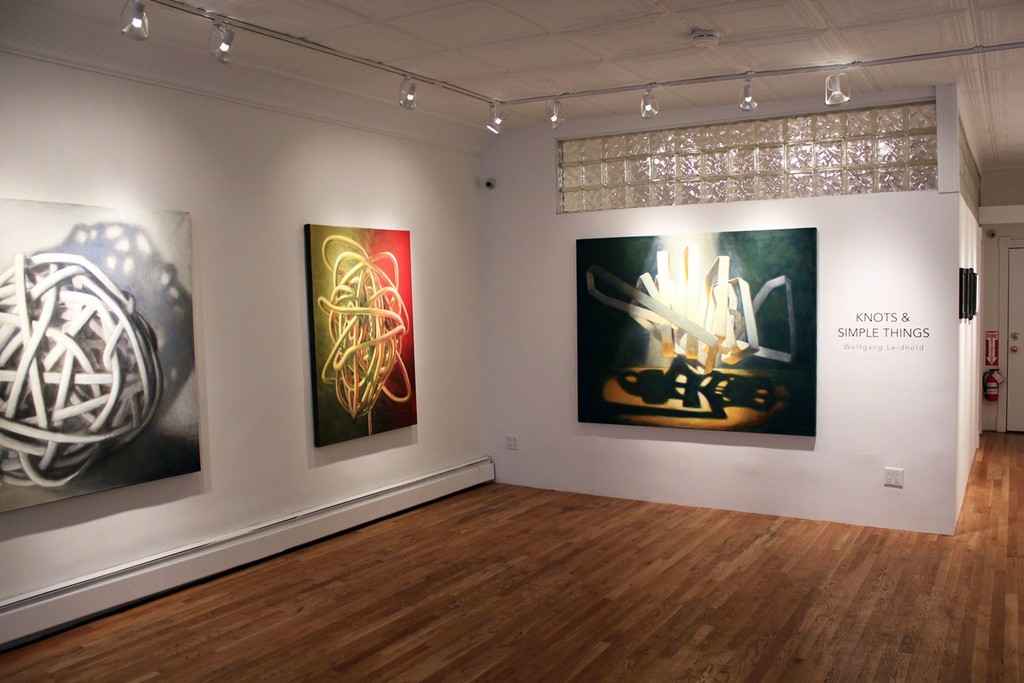 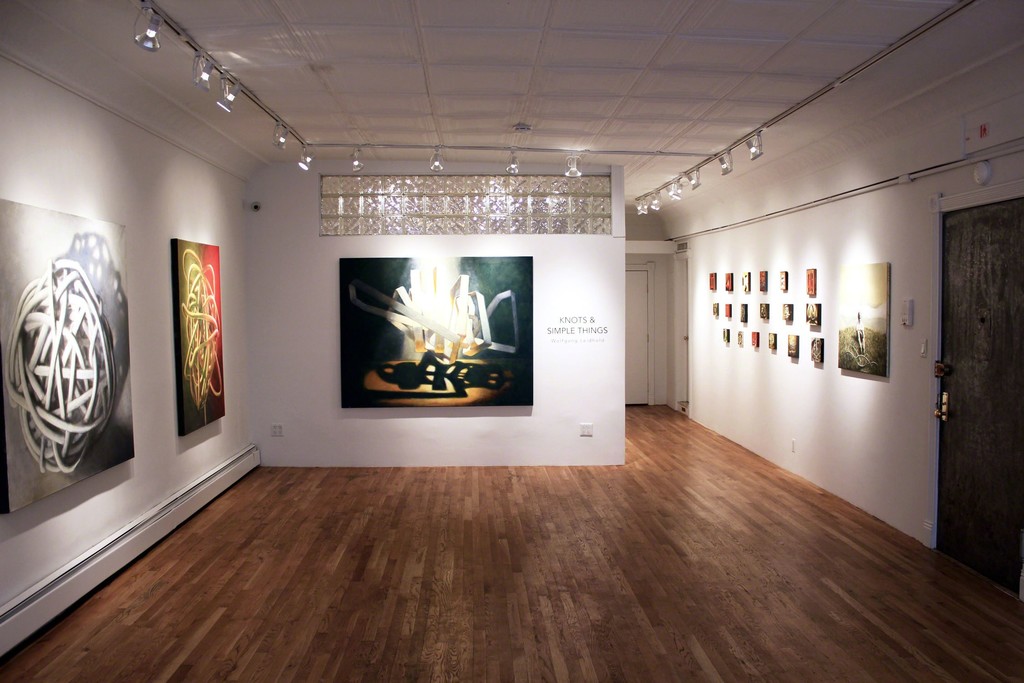 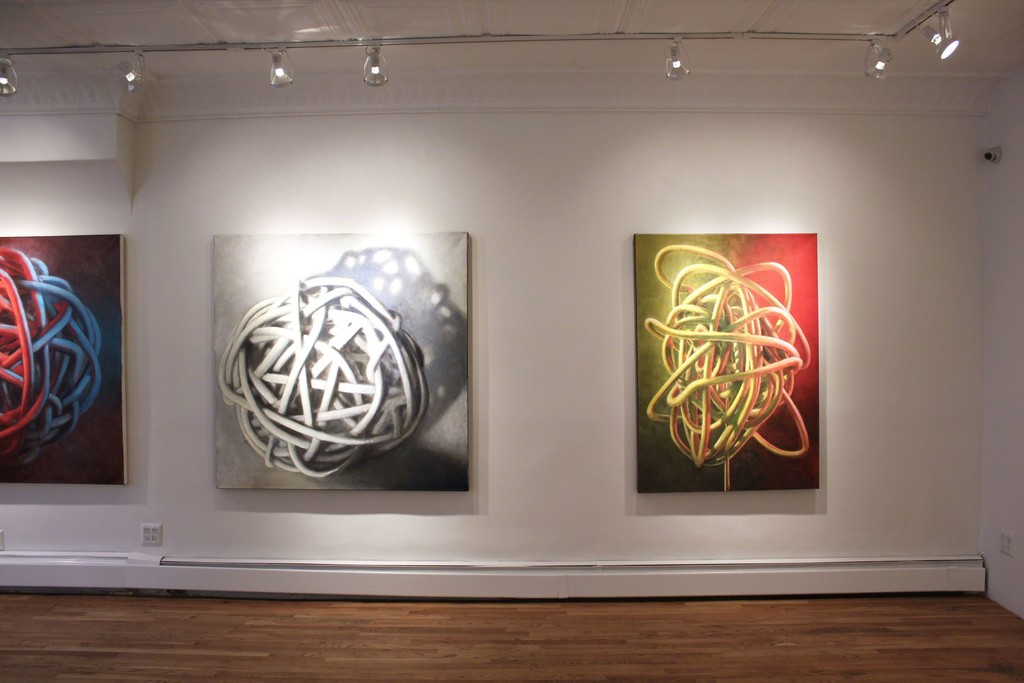 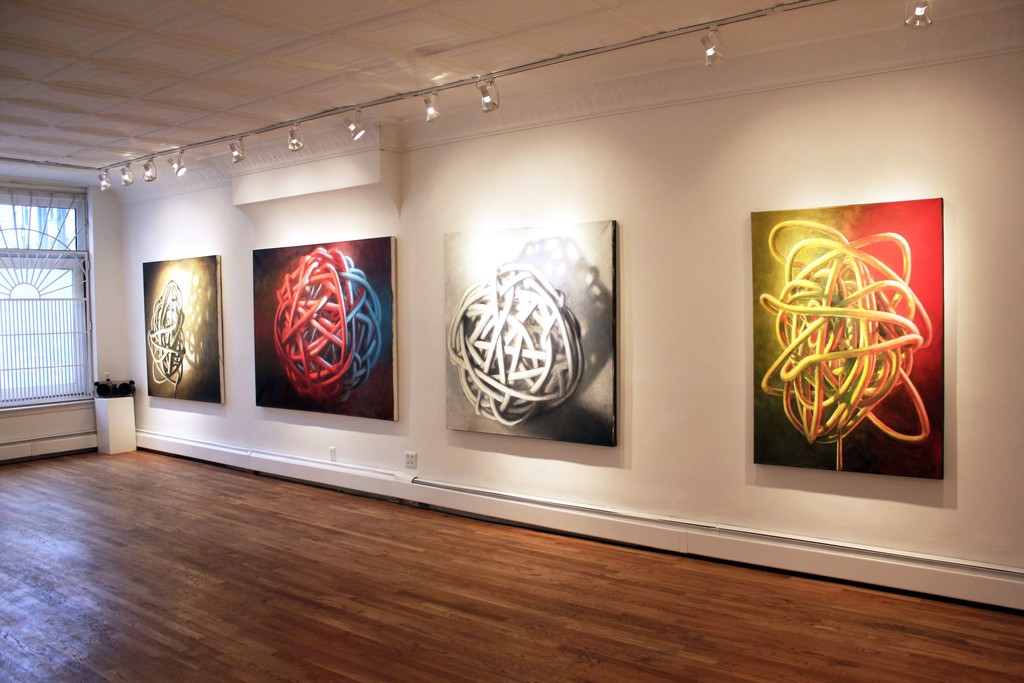 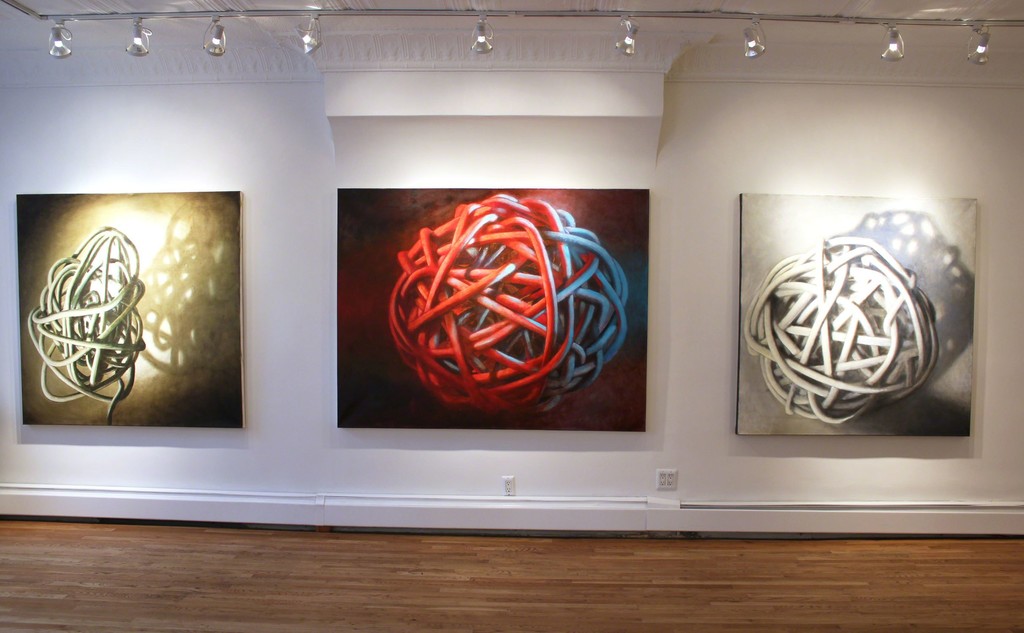 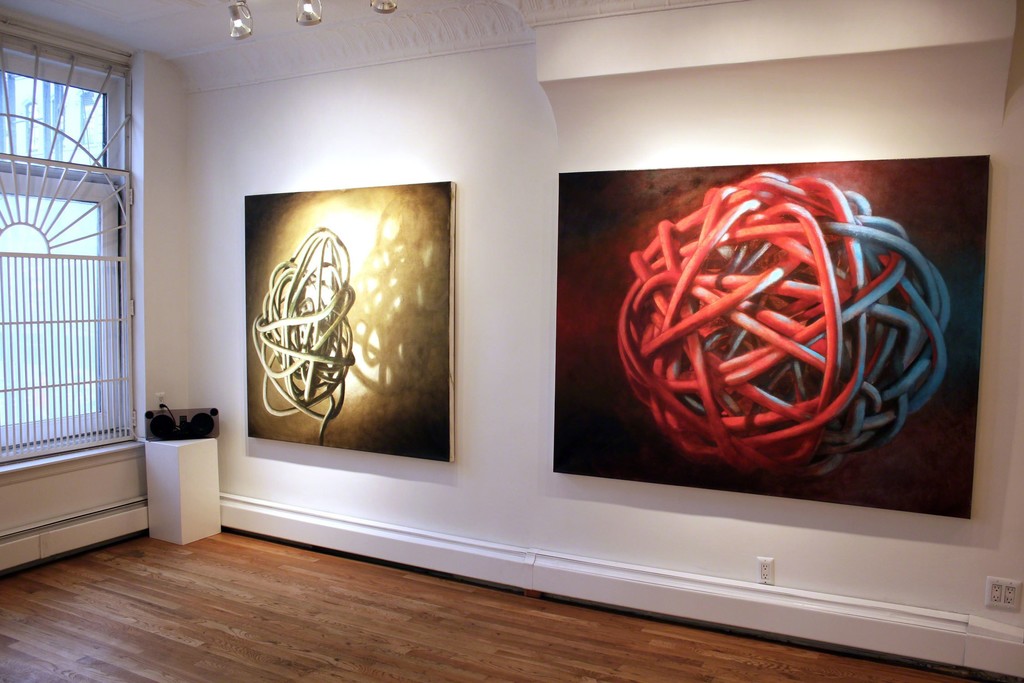 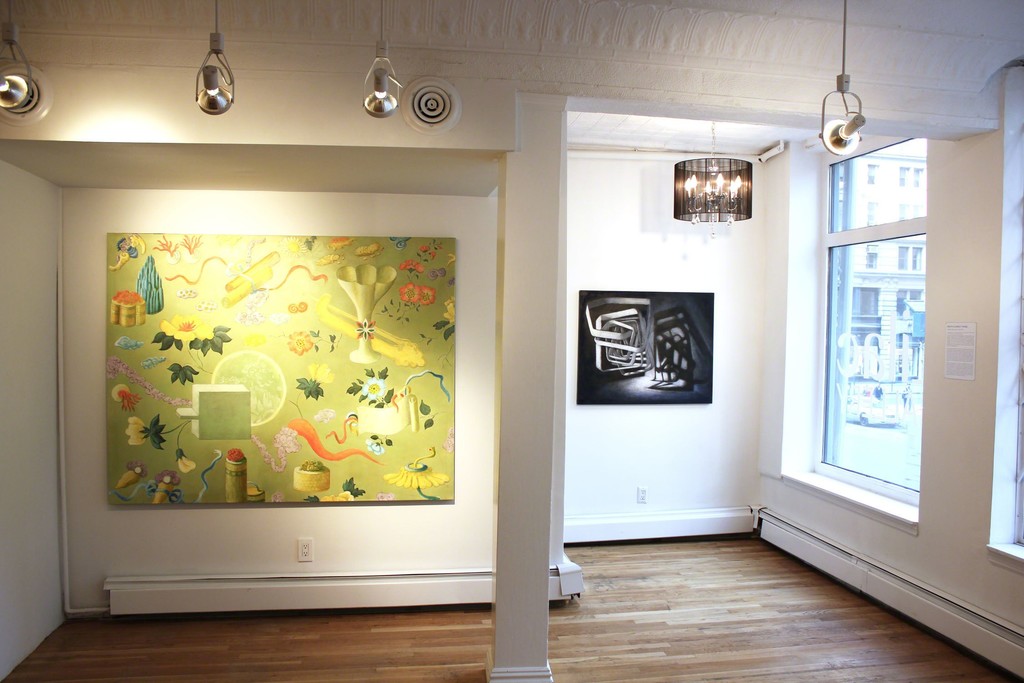 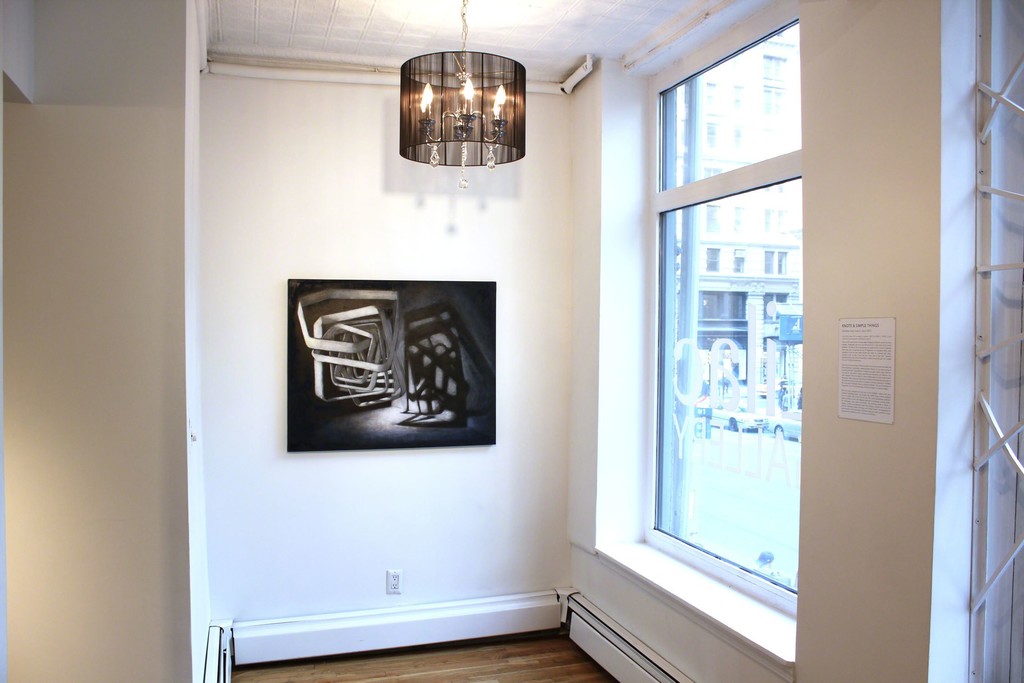 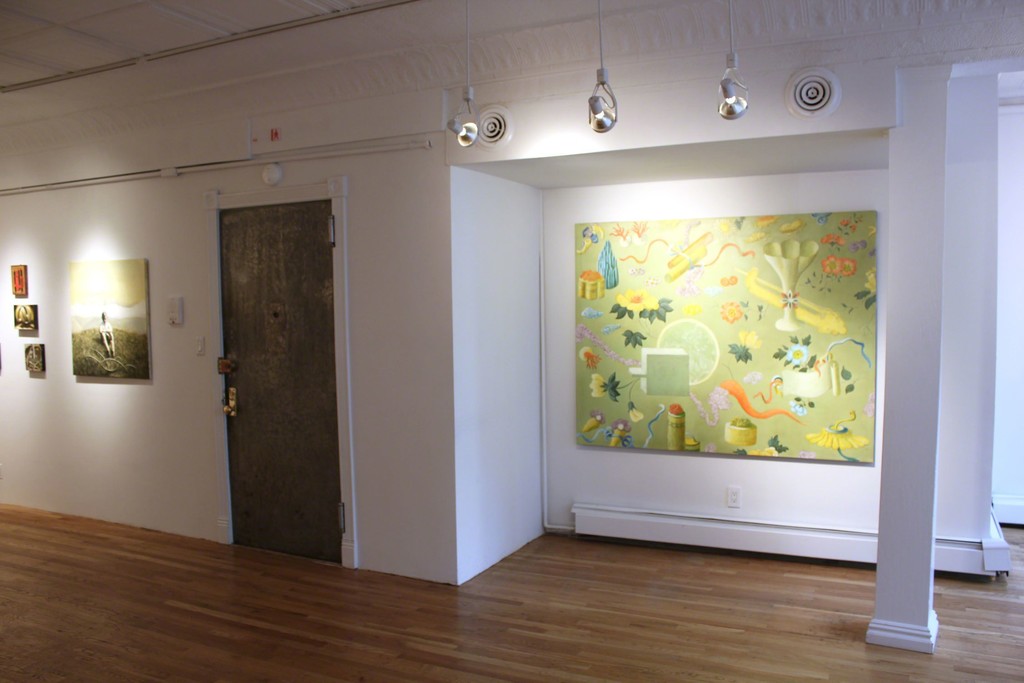 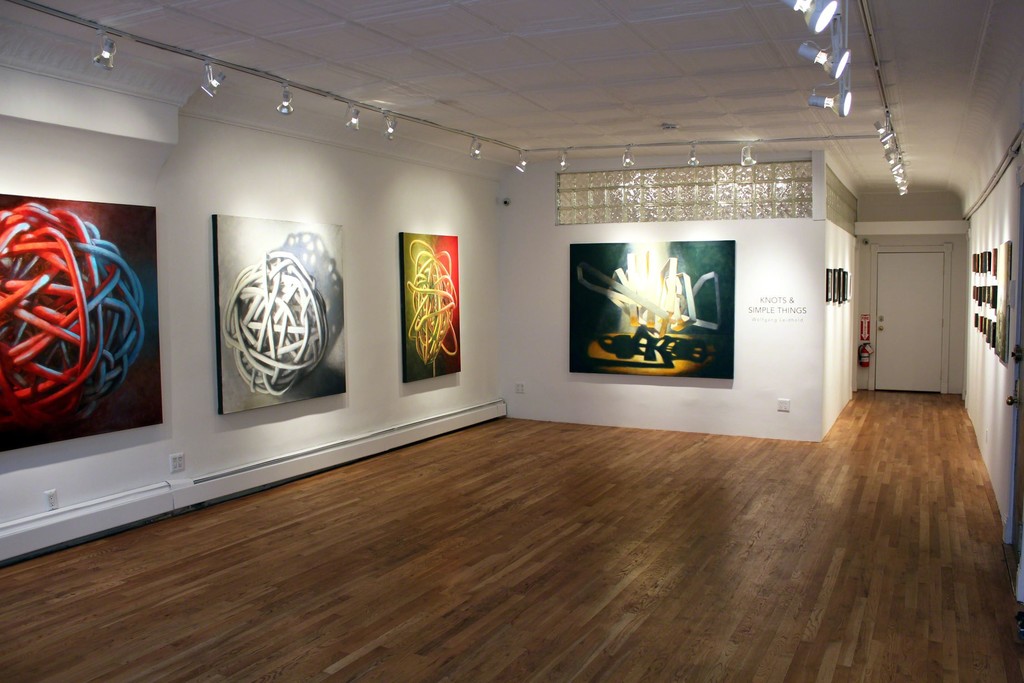 KNOTS & SIMPLE THINGS
Paintings by Wolfgang Leidhold JUNE 3 - JULY 2, 2015
New York—Lilac Gallery New York is pleased to present “Knots & Simple Things” a solo exhibition of works by Wolfgang Leidhold, from June 3 - July 2, 2015. The exhibition will open with a reception on June 3 from 7-9 p.m.
Knots are the central theme that pervades Wolfgang Leidhold’s artwork for many decades. “Everybody’s got his or her individual knot” is the motto of his current exhibition. The idea to the knot-paintings was sparked off on a trip to Indonesia many years ago. On leaving the city of Yogyakarta, an Indonesian fellow artist presented a knot he had made himself from rattan as a farewell gift. When handing it over he said: “That’s the way I feel, most of the time.” Recently unearthed from a box of his memorabilia, Leidhold turned the gift into a model for one of his first knot-paintings.
Each knot has its own history. When the artist’s home was recently renovated, the house electrician, involuntarily, created another dummy for the recent group of big and small knots. The electrician’s material was surplus ribbon cable, which he had used for new electric wiring, crumbling and discarding the leftovers. The artist retrieved it from the trash bin. Other models again the artist made himself. Many other nodes came from the hands of children and friends becoming part of the Small Knot Group. Some come as sculptures, others as drawings or scribbles. But in any case: Everybody makes a unique knot design. They are as individual as fingerprints. Thus, the knot-paintings are the final stage in a social art project.
While the knots represent the main part of the exhibition, others come from Leidhold’s Mythology Series - for example The 10.000 Things, a theme adopted from the creation story of the Dao De Jing. This series demonstrate Leidhold’s subtle tonalities of color and elegantly balanced compositions, evoking dream-like landscapes. Upon closer examination, the paintings allude to stories of creation, sacrifice, and adoration taken from religious sources such as the Old and New Testament, Greek mythology, and Chinese Daoism. The intersection of spiritual themes and mythological narratives reveals the artist’s search for a visual language that synthesizes various cultures and civilizations.
Wolfgang Leidhold was born in 1950 in Dortmund, Germany. He studied painting from 1972 to 1975 under the mentorship of Hans-Jürgen Schlieker (1924 - 2005), a leading figure of the German Art Informel at the Arts Center of the University of Bochum, Germany. In 1982, Leidhold received his PhD in Social Sciences, with minors in Chinese Studies and Philosophy. As a research fellow, he studied at Stanford University in 1976 and Georgetown University in 1986. Since 1992, Leidhold has been a professor of Political Science at the University of Cologne, Germany, with a focus on History of Ideas and Political Theory. He is the author of numerous books and articles.
Lilac Gallery is located at 144 Fifth Avenue, 2nd floor, between 19th and 20th street. For further information, please contact the gallery at [email protected] or at +1 212-255-2925. Gallery hours: Mon-Fri 11 a.m. to 7 p.m. by appointment only Saturday & Sunday - www.lilacgallerynyc.com
Press Contact:
Mark Ilitzky
Curator +1.858.717.1500 [email protected]