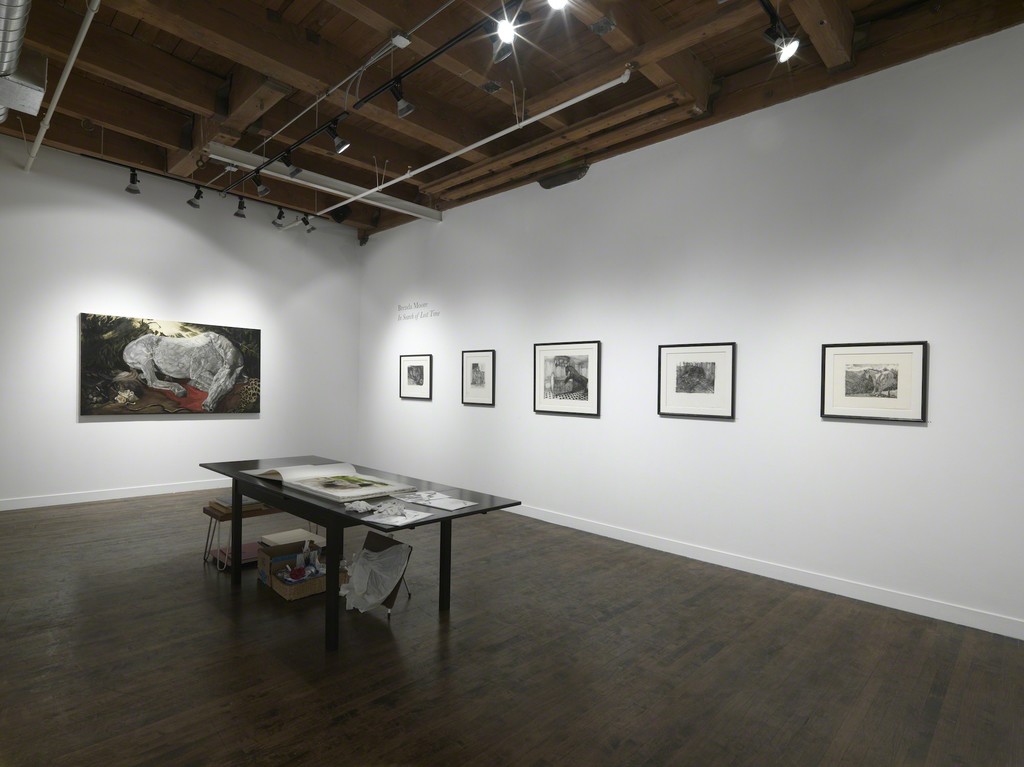 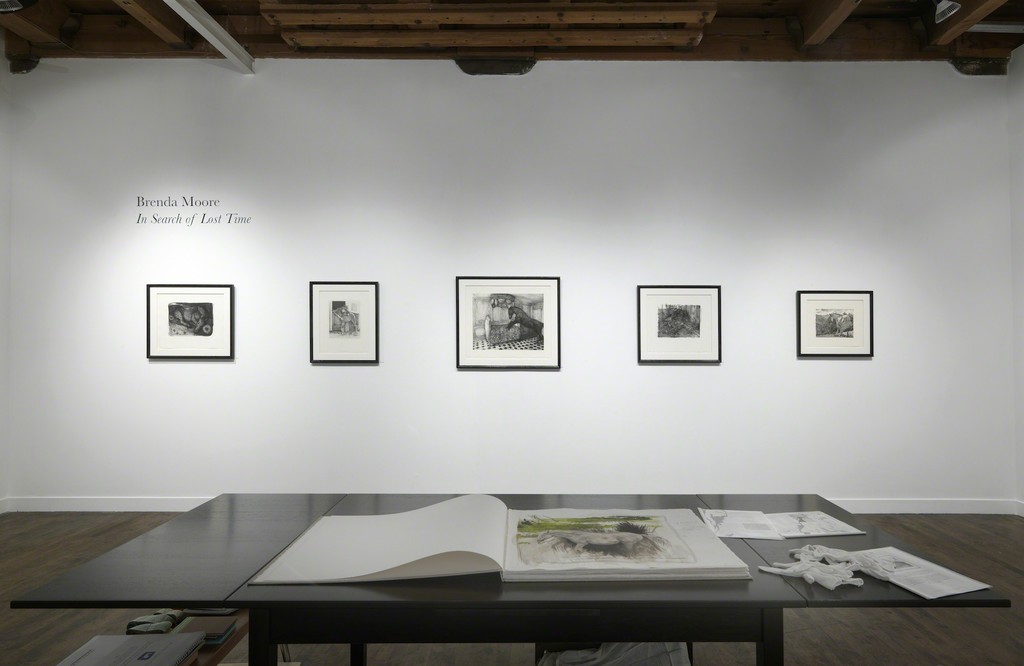 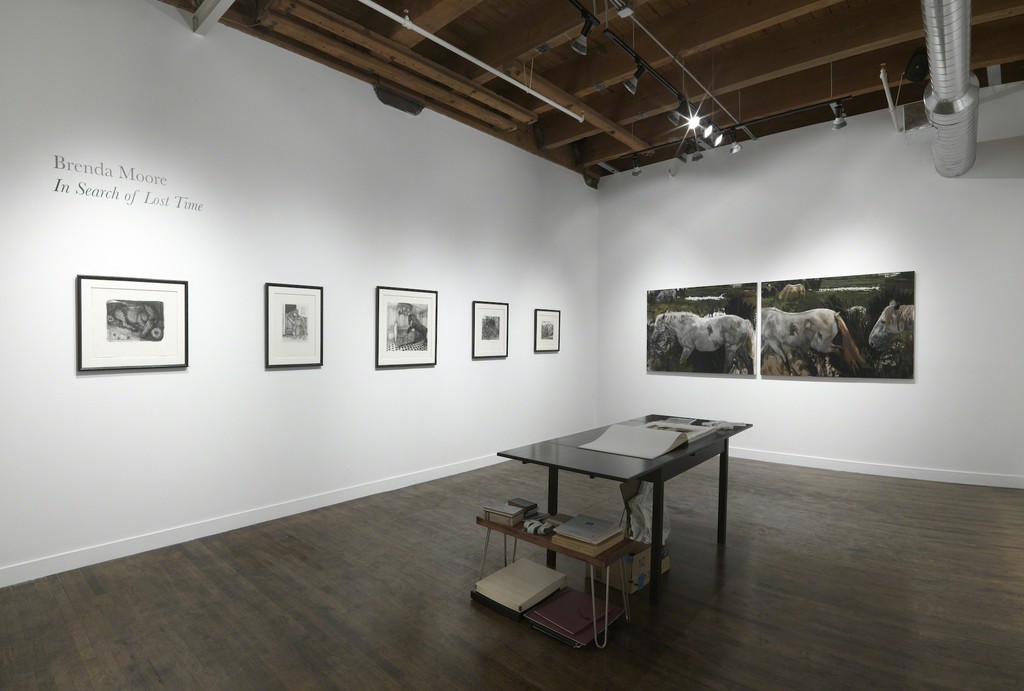 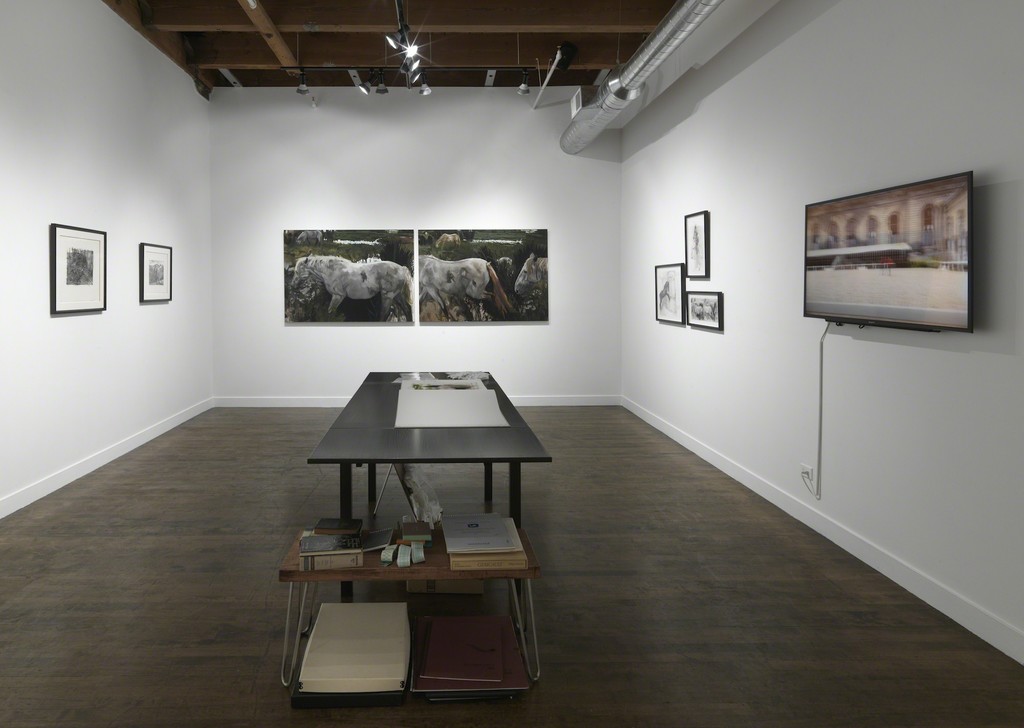 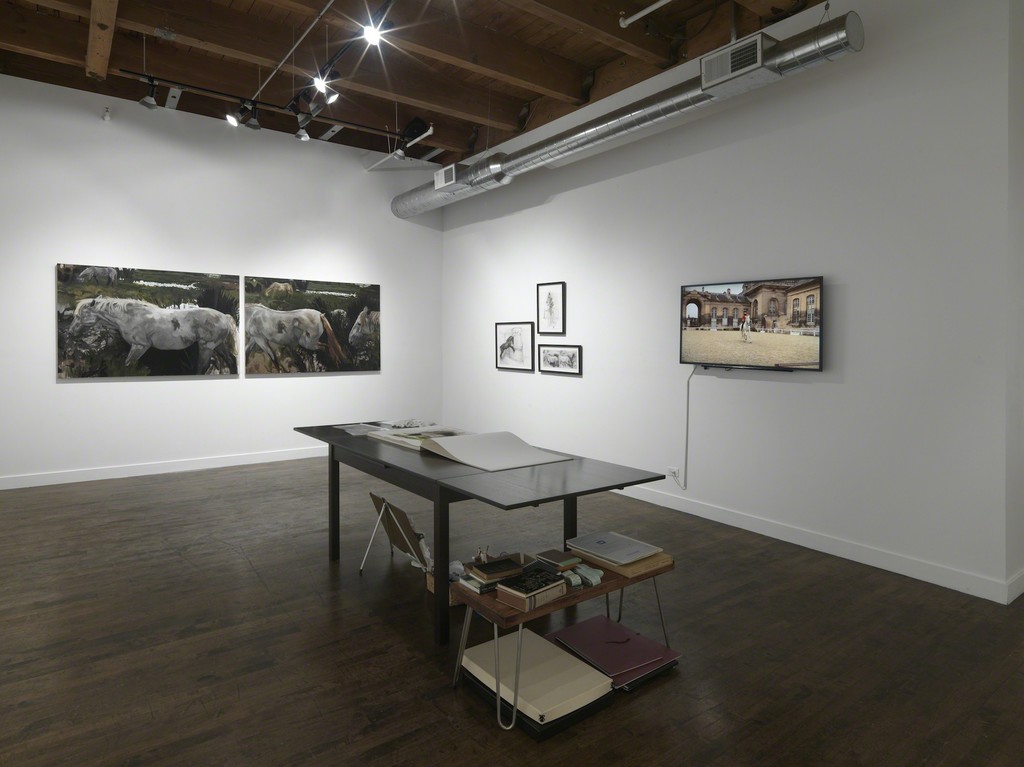 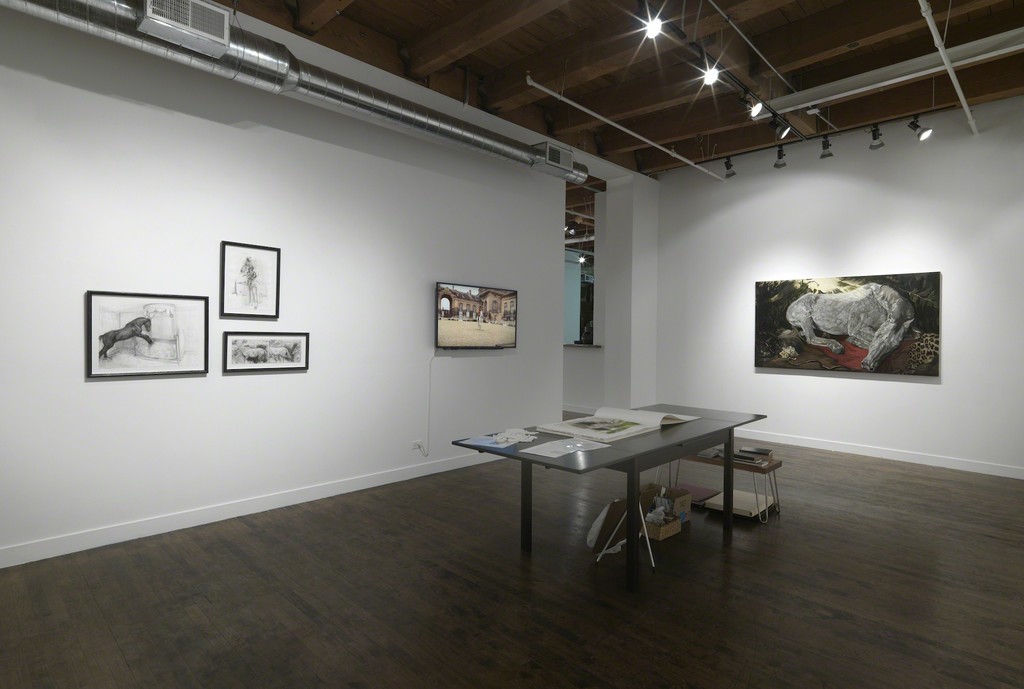 Linda Warren Projects closes a successful 2016 year of exhibitions with two wonderful solo shows by Alex O’Neal and Brenda Moore. Marking O’Neal’s fourth solo exhibition with the gallery and Moore’s third, both of these talented artists will present new works from their very distinct oeuvres that extend on long held personal interests and formal motifs. Poetically bonded as colleagues and friends, O’Neal and Moore draw from intimate memories, art history, and pseudo narratives that are both magical and psychological.

On view will be new works drawn from the artist’s continued inspiration of the iconic horse and its power for poetic license and artistic prowess. From childhood, the horse held Moore’s fascination and imagination, which a decade later seeped deeply into her visual arts practice. For the artist, the complexity of the animal is revealed through the formal aspects of painting, drawing, and printmaking. As part of the exhibition Moore will present a series of stone lithographs as well as a mesmerizing video she filmed while on an awe-inspiring visit to the Musée Vivant du Cheval (Living Museum of the Horse) in Chantilly, France.

The horse’s robust autonomy is Moore’s ultimate challenge; she exerts the power of its body in The Sleep of Endymion or Moon Effect, 1791. By placing the horse in a complicated composition, she at once re-contextualizes the Old Master painting by Anne-Louis Girodet’s The Sleep of Endymion. Although archetypal, the horse is more than just a character. While her interest in the great French Romantic and Realist painters such as Gericault, Delacroix, and Courbet continue to inform her conceptual paintings, her starting point is purely academic and formal. She states, “The horse remains at the center as subject of interest in anatomy, behavioral characteristics and functions metaphorically, fantastically wild and representationally in my work.”

Throughout her career, Moore has explored beyond just painting. She’s an illustrator, printmaker, has created installations, videos, and now adds performance to her oeuvre. The artist will perform immersive drawing in an oversized hand bound artist book throughout the course of her exhibition. During which she will contemplate unconscious time and draw from latent childhood memories. “Memories come to mind of spending hours coming up with what to play…when I finally figured it out, it was time for bed and the ‘play’ was never actualized,” Moore explains. “This has become part of my working process – the time spent planning my art and the concentrated transcendent time making it.” Moore will attempt to attain the subliminal ecstasy of time within the confines of actual measured time.

The Lithography Project, which consists of five stone lithographs and will be on display at the gallery, was funded by the Individual Artist Program Grant from the City of Chicago Department of Cultural Affairs & Special Events. The project was also funded by a grant from the Illinois Arts Council Agency, a state agency through federal funds provided by the National Endowment for the Arts.

Brenda Moore is a Chicago based artist, and has taught at the Chicago Academy for the Arts since 2003. Moore received a Master of Fine Arts from American University in Washington, D.C., and a Bachelor of Fine Arts from Moore College of Art and Design in Philadelphia, Pennsylvania. She has lectured at Knox College in Galesburg, IL, and the University of Saint Francis in Fort Wayne, IN as part of a solo exhibition in 2014. Moore’s paintings have exhibited in Jane Haslem Gallery, Washington, D.C.; Elizabeth Roberts Gallery, Washington, D.C.; Watkins Gallery, Washington, D.C.; Levy Gallery, Philadelphia, PA; LIPA Gallery, Chicago, IL; Santa Monica, CA; and Fort Wayne, IN. Her work is included in both corporate and private collections across the United States, including Kirkland and Ellis, Wellington Management, and Deloitte and Touche.