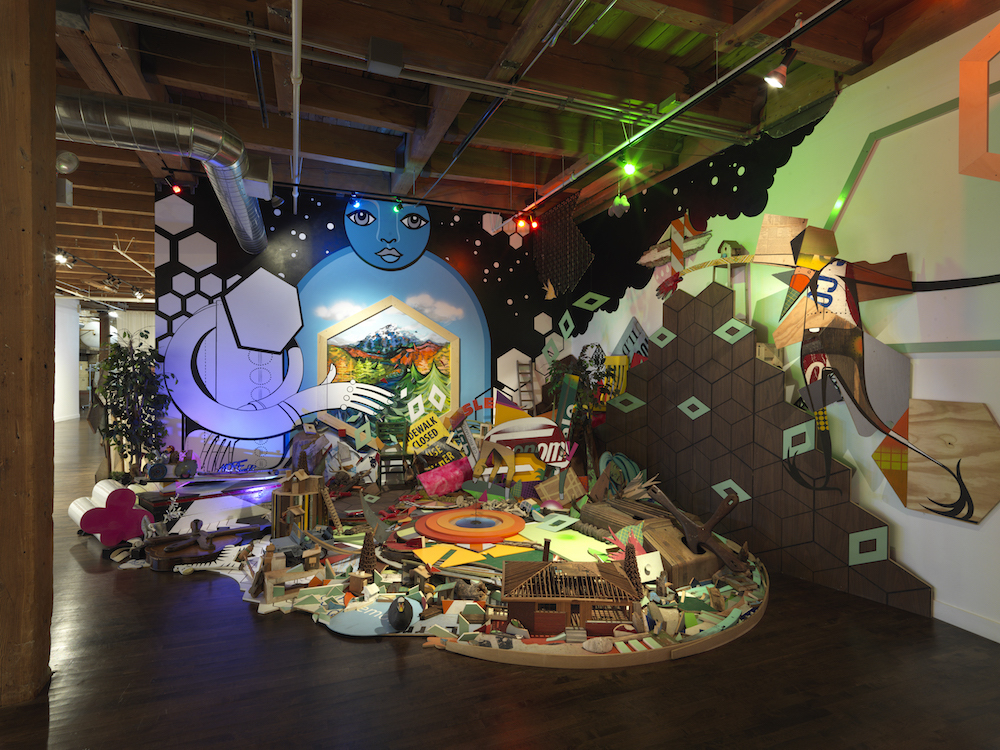 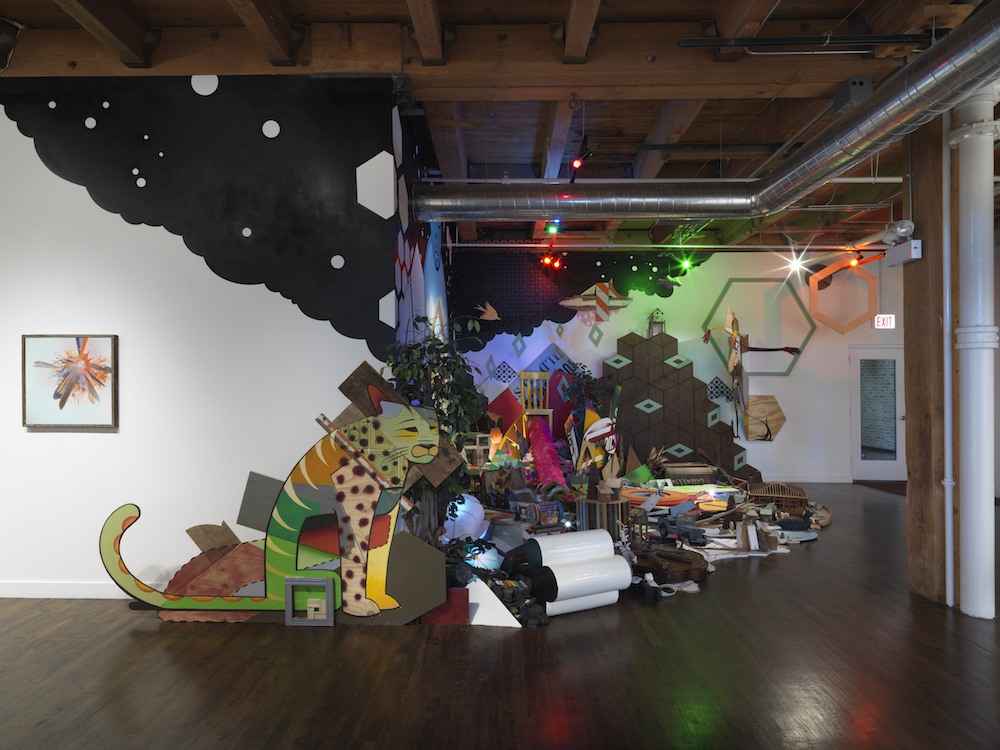 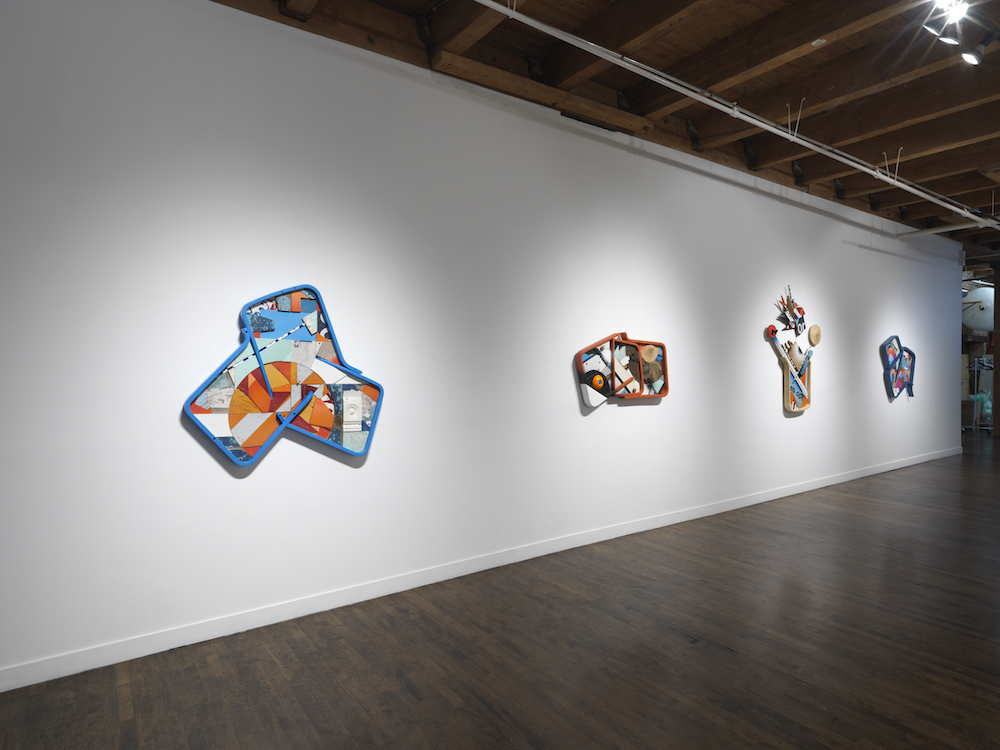 Linda Warren Projects kicks off the 2017 fall season with “Open Source,” an exciting solo exhibition of new works and installation by Chicago-based artist Chris Silva. Showing for the first time at LWP, Silva will present an assortment of 2D collage sculptures and paintings in Gallery Y and a large-scale multi-sensory, multi-media, video animation installation in Gallery X. Featured in Gallery O is “Go Figure,” a curated group exhibition of female artists from the gallery’s roster. Loretta Bourque, Megan Euker, Lora Fosberg, Paula Henderson, Michiko Itatani, Judith Mullen and Jennifer Presant come together to examine, through their particular artistic lens, the human figure.
Gallery X & Y - Chris Silva, Open Source
Born in Puerto Rico, Chris Silva is a Chicago-based artist, musician, educator, and overall facilitator of urban design. Whether it is through graffiti, community murals, or large-scale installations that encourage collaboration, Silva’s artistic foundation emerges from the street. Silva’s practice is all-inclusive and democratic. It ranges from painting and found object assemblage to three-dimensional installations that include audio-collaged soundtracks. Deeply rooted in skateboarding and hip-hop culture, Silva incorporates music and sound to his practice, creating a continual dialogue between the phonic and the visual. Silva’s formal aesthetics emerge from the discarded objects we see everyday to the shiny paint that covers walls and street signs. To term his practice “street art” is perhaps an understatement. All of his objects and materials find common ground within the work and interconnect like a jigsaw puzzle. Each piece has a role to play, and for Silva, a story to tell as he constructs his random findings through a stream of conscious process of creation and expression. The result is a magical reality. Deceptively positive, the work is at once playful and sophisticated, but also full of vulnerability and worldly concern.
Gallery Y will showcase part one of a two-part large-scale installation, in which the artist collaborates with his life partner and fellow artist Lauren Feece to create a mixed media free form sculpture that visually connects to the adjacent wall of Gallery X. In collaboration with Brian Steckel, a mapping and motion graphics artist, part two of the installation will feature sound and projection mapping to spatially augment reality. This cutting edge technology turns objects, often irregularly shaped, into display surfaces for video projection extravaganzas and all-immersive sensory experiences.
“My sound pieces are composed in the same sampling, cutting, and layering fashion with which I create visual work. My frequent collaboration with others, appropriation/reuse of material, is done as a celebration of the interconnected nature of being and as resistance to our self-obsessed, disposable culture. My process seeks the balance between improvisation, intuition, and analysis, with the aim of creating a resonant experience for the audience.”
Silva’s commitment to collaboration has led to the act of facilitating art experiences for young people, and to date, it is an important part of his practice. He routinely includes students and collaborators on large scale projects that lean heavily in improvisation. “My frequent practice of collaboration seeks to pursue a less self-centric approach to art making – one which embraces the challenge of sacrificing individual control, or credit, for the greater good of the projects, and in the service of a larger community,” the artist explains. Over the years, Silva has helped orchestrate youth art projects, both independently and in partnership with Chicago Public Art Group, Young Chicago Authors, Gallery 37, Yollocalli Arts Reach, After School Matters, and the School of The Art Institute of Chicago.
Silva was awarded a major public art commission by the Chicago Transit Authority to create a mosaic for the Pink Line California Station (2004); created block-long murals in Chicago's Loop “You Are Beautiful” (2006); created a sculpture for the Seattle Sound Transit System (2008); won the Juried Award for Best 3D Piece at Artprize (2012); and created large commissions for 1871 Chicago (2013), the City of Chicago, LinkedIn, CBRE (2014), OFS Brands, and The Prudential Building (2015). He has exhibited in Chicago, San Francisco, Los Angeles, New York City, Philadelphia, London, Melbourne, Copenhagen. Chris was the recipient of an Artist Fellowship Award from The Illinois Arts Council (2007), a 3Arts Award (2015), and is represented by Linda Warren Projects.