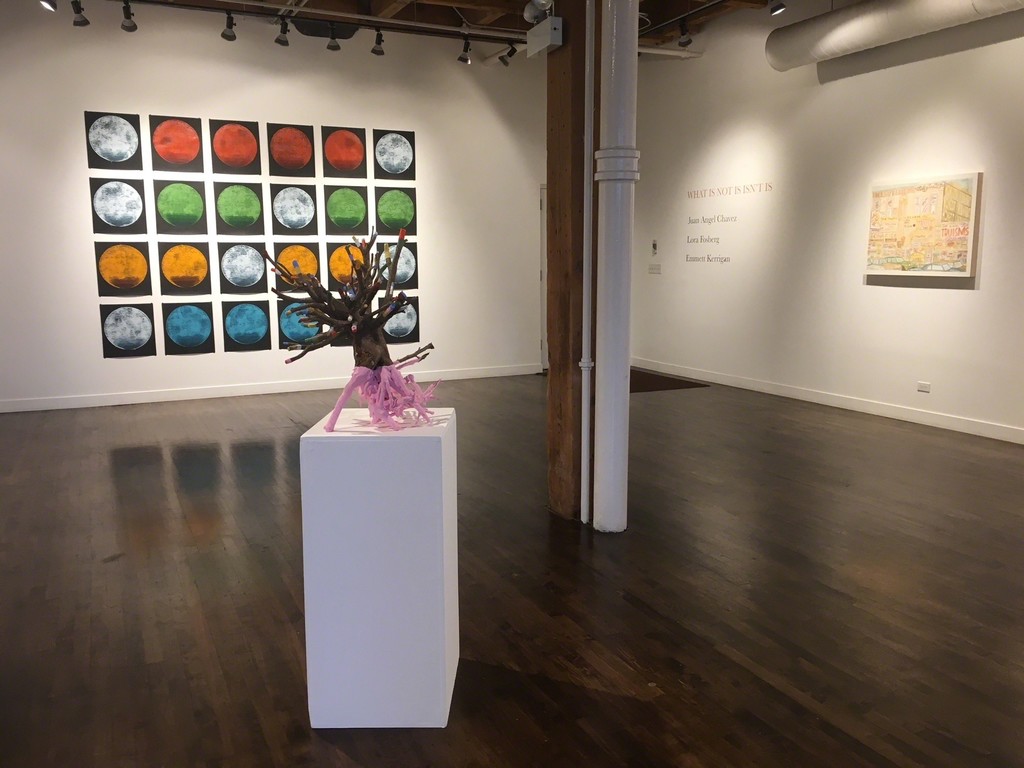 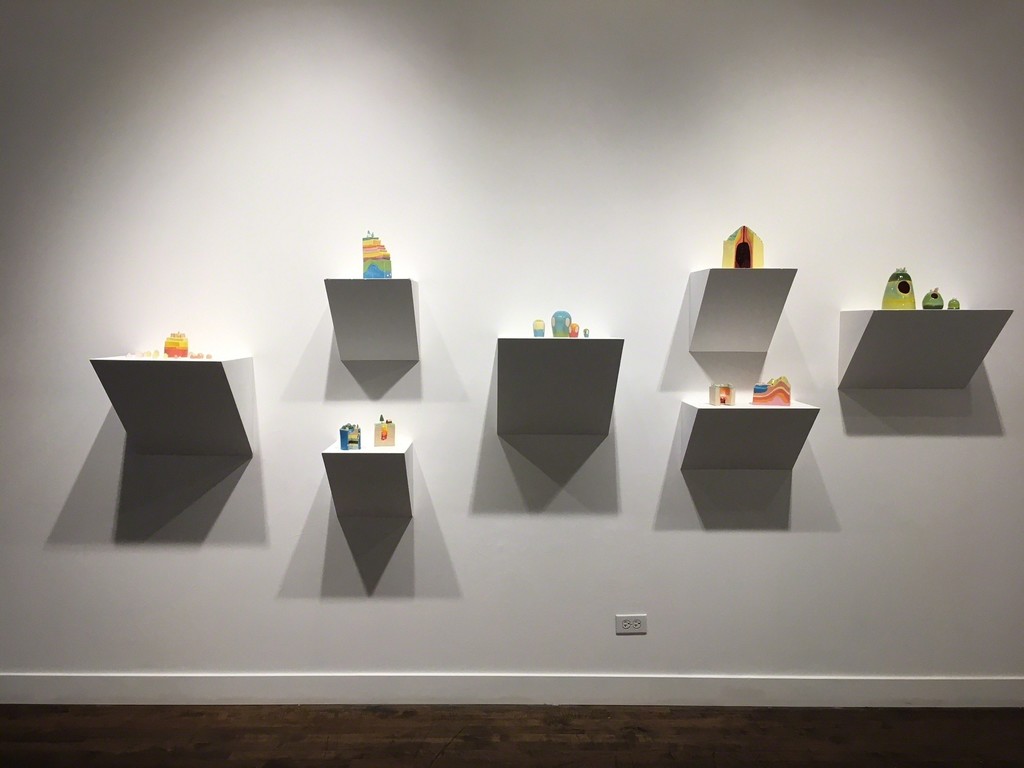 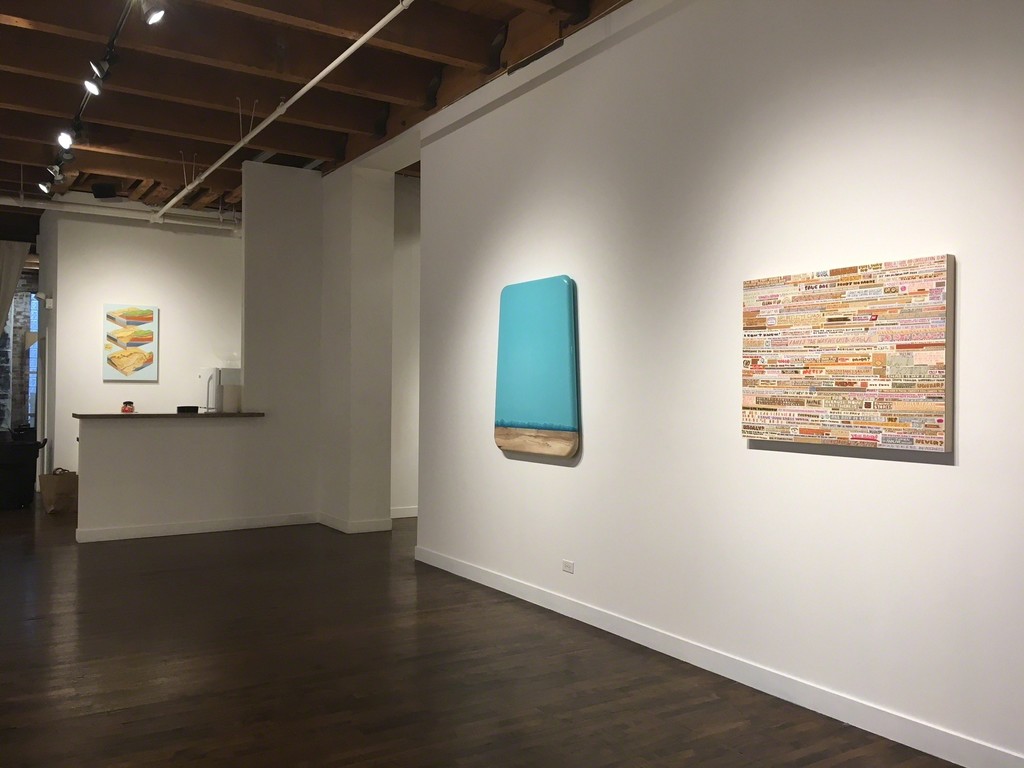 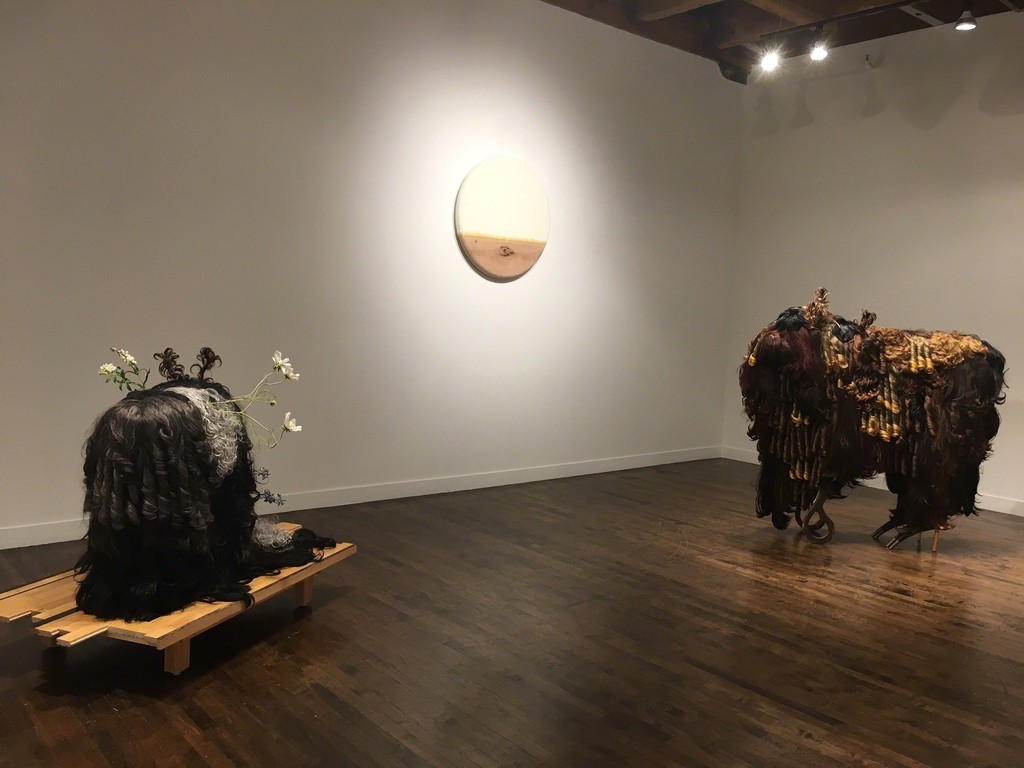 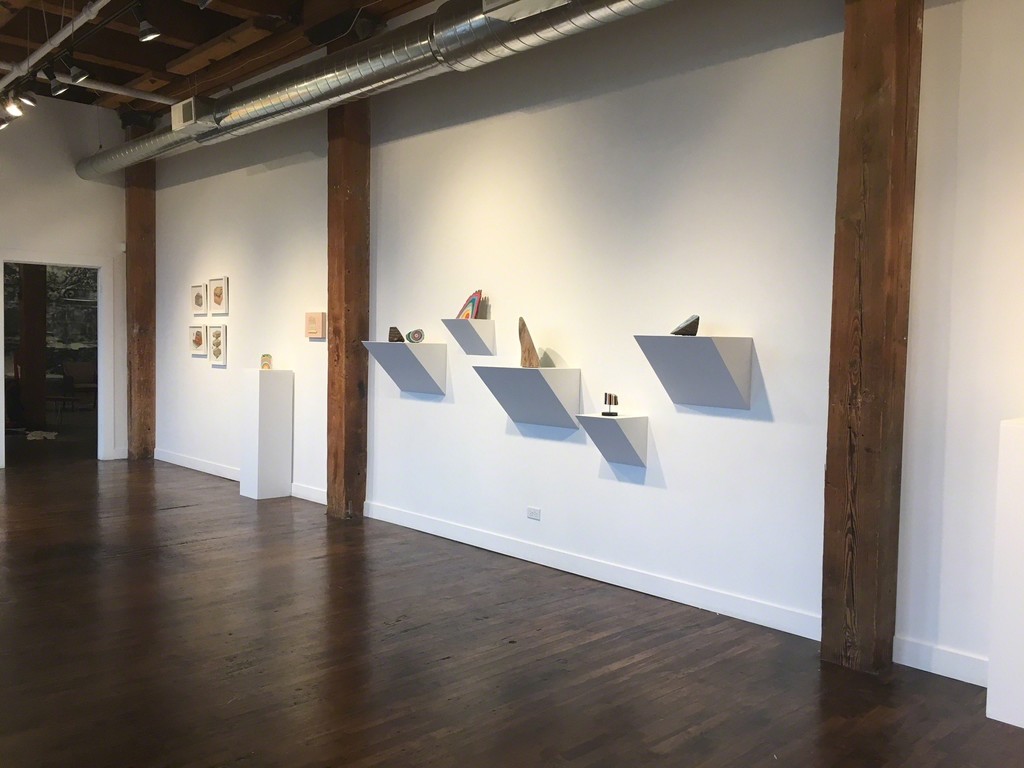 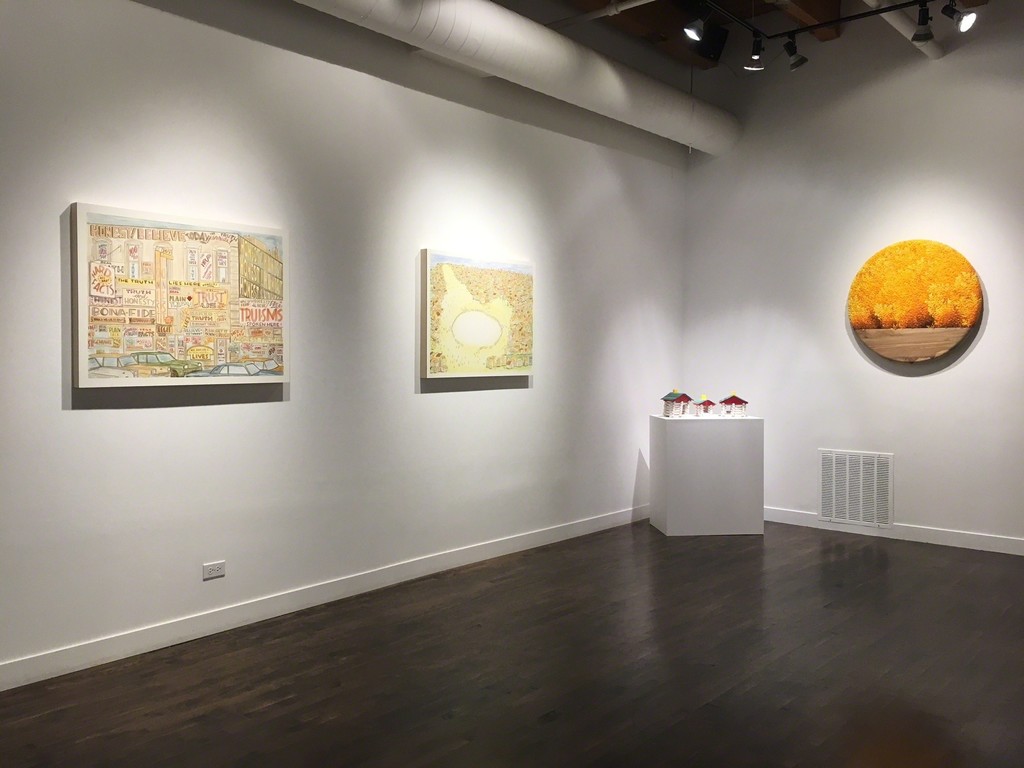 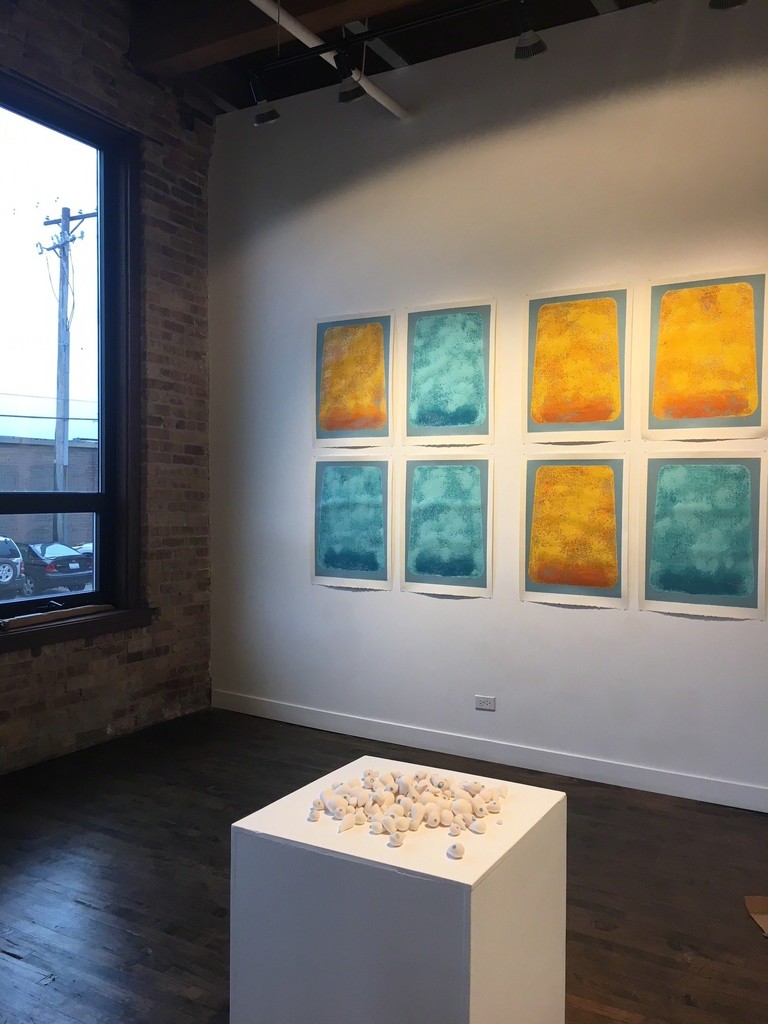 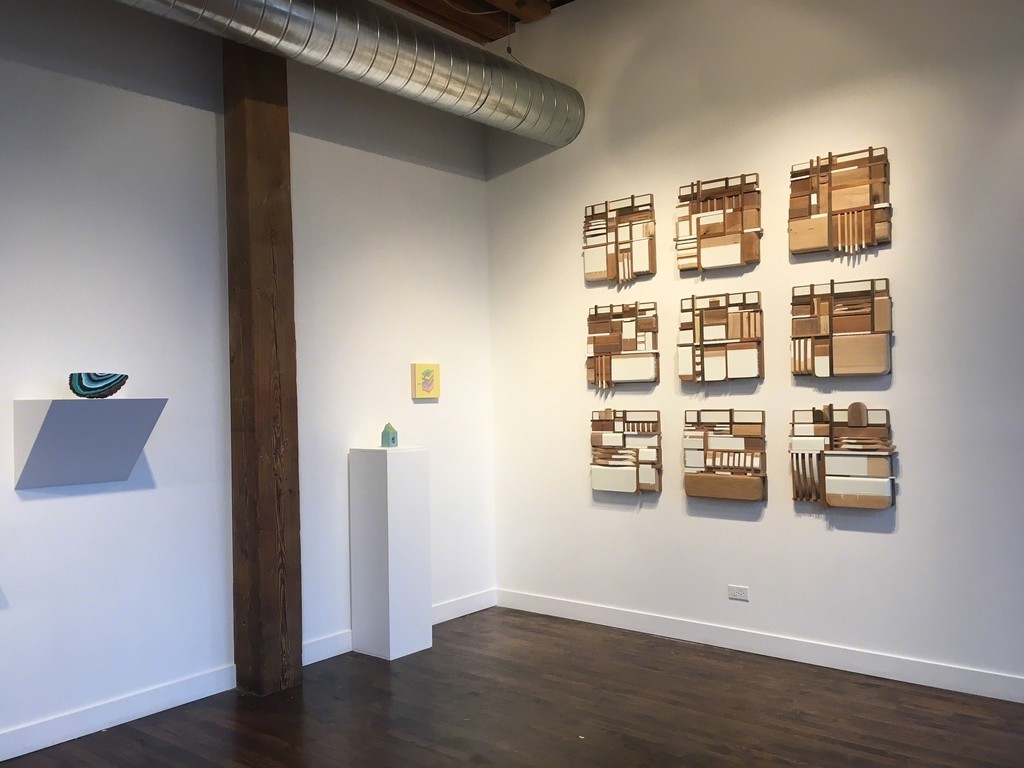 Born from a very personal desire to reconnect and collaborate with these three great artists and friends, to experience one last “hurrah” together before the next chapter of LWP begins, there is not a “per se” overarching theme to this show. Yet a broad notion of “landscape” and a pathos of kinship permeate throughout this grouping as well as their individual work. For Chavez, sociocultural landscapes are conveyed via a poetic engineering of repurposed urban debris and artifact – bounties from his nuanced scavenging and hunting. For Fosberg, text-based works and ceramic sculptures illustrate precarious environmental realities, the chaos of our political atmosphere and the ongoing and constant absurdities and dualities of the human condition. And Kerrigan, who deeply immerses himself in his singular, remarkable paint work and process, continues to reduce his landscape into more abstraction, boosting the notion of inwardness, simplicity and meditation – the necessity of escaping our complex outer world to grasp onto something more concrete and primal. These are not easy times for most of us living on this planet. The personal struggles combined with the all the surrounding violence, hatred, destruction, prejudice, injustices, and the shit list goes on, is everywhere and all around us. And art, so clearly with these three artists, resonates as the way for breathing and communicating all of the despair and dysfunction toward a notion of hope. As discombobulated as the title of this show may sound, which says just take it, one way or another or many, investigate the many layers of this work. Let art be like family and friendship – a place to accept, express and come together to find the beauty in our lives. Our goal, through the upcoming curatorial experience, is to further a conversation amongst close friends whose lives have been informed by one another as people sharing a real life language of each other’s trials and tribulations, successes and failures, highs and lows. Connection.

Running through the core of Juan Angel Chavez’s work are issues of adaptability, survivability and the constant push and pull between domesticity, the urban and the feral. Chavez’s early upbringing on a ranch in northern Mexico before coming to Chicago at the age of thirteen, necessitated adaptation and adjustments that all immigrants experience in order to do what it takes to manage, be resourceful and ideally thrive. “I don’t consider them cultural situations but universal experiences,” states Chavez. In several recent sculptures, some which will be on display in this exhibit, Chavez hints at the conflicted and heavily narrativized histories of the First Nations who lived on the land long before (and while) his ancestors began exploring it. Since 2014, Chavez’s work has been further inspired by learning about his great-great-great-great-great grandfather who traveled from Austria to the United States and Mexico in the search for gold. Chavez, the self-identified “Hunter & Collector” (words scrawled in graphite on his studio wall), finds his gold on city streets, abandoned buildings and thrift stores where objects are sold for mere pennies. Featured in his newest work are materials such as fake hair of wigs and hair extensions, animal fur, fishing poles, feathers, textiles, burnt wood – different signifiers reappropriated into multi-generational and multi-cultural emblems of identity and subsistence. Chavez’s emotionally impactful objects and artwork balance ingenuity, gusto and sensitivity, connecting his own history and spirit to that of the First Nations, the Mexican, and the Anglo-American. To convey perseverance and existential realities with work that transcends all boundaries is a hallmark and product of Chavez’s unique harvest.

In Lora Fosberg’s newest work, she delves further into the realm of sculpture and extends the imagery of her drawings into ceramics. For Fosberg, the question of the planet’s survival is the signature theme of her work. Trees still figure prominently, serving as metaphors for history, longevity, time, life and death. Now more prevalent and doing the “talking” are skulls, tears and dissections of the earth itself and soil beneath it. Fosberg’s whimsical drawing style and pastel colored glazes lend a cheery eye to a bleak situation. But no question, damage is done and death is lurking everywhere. In the battle of man vs. nature, it is clear we both are losing. The profound wisdom and poignant wit conveyed through these masterful drawings and texts propose no panacea but instead offer commentary on our environments current terrible state. We come together for this exhibit, realizing that time is our most precious commodity. Interestingly, this parallels Fosberg’s own motivation for moving into ceramics, which was the desire to spend more time with her mother, using her kiln as a way to connect and for togetherness. It seems still that the most basic and comforting human connections are found within family and close friendships. Here is where the dialogue begins and ends, and everything in between is how to make meaning within that lifecycle.

Emmett Kerrigan’s circle, that powerful symbol of unity, eternity and the lifecycle itself, is a dominant form featured prominently throughout his newest body of work. Painted in extensive repetitious mark making in the form of thick droplets, the work is built up layer by layer on circular sculptures made from salvaged wood. There is a profound sense of ritual, meditation, and a passage of time that is palpable for the viewer. Works on paper feature simply a circle created through an almost monoprint process using roofing material as the application tool for his paint. Through decades of painting, Kerrigan’s landscapes have traversed the countryside of the Midwestern farmscape, the factories of the Midwestern cityscape, the steel belt and his Chicago neighborhood. They have been turned upside down into aerial topographies forming crop circles and cornfields. Throughout each body of work, and especially since his last exhibition in the gallery in 2016, the landscapes have moved more from the real to the imagined, away from representation toward abstraction. In this process, it is evident how much Kerrigan can do with paint, color and surface to mesmerize and lure his viewer. It is evident that his studio and practice, like every other artist, is a sacred space of salvation. Kerrigan’s intense productivity, process and output, makes it evident that this is where he can get lost in the sheer material and action of making in an attempt to turn off the challenges and hardships of life. Several pieces in this show were named after family members who were diagnosed with serious illnesses in the course of his making this work. Once again, his connectivity to that which is most dear in his life, becomes one with the artwork. His personal history becomes part of these universal deconstructed landscapes and the marks of time by that which our lives are measured.

Juan Angel Chavez describes himself as partly SAIC (School of the Art Institute of Chicago) schooled, and partly street schooled. His work has been exhibited through the United States, Mexico, Europe, Thailand, and New Zealand. He has been recognized with the prestigious Richard H. Driehaus Individual Artist Award and the Louis Comfort Tiffany award in NY, NY, Artadia Individual artist award NY, NY, 3Arts, Chicago and The Joan Mitchell Foundation award for painters and sculptors, NY, NY. He has also participated in artist residencies at Museum of Contemporary Art, Chicago and Apex Art, NY, NY/ Bangkok Project and most recently the Joan Mitchell Artists-in Residence Program in New Orleans – where he produced some of the newest works on display.

Lora Fosberg has exhibited widely throughout the United States and abroad. Recent solo exhibitions include Jack Fischer Gallery in San Francisco, the Museum of Contemporary Art in Chicago and La Fontsee Gallery in Grand Rapids. Fosberg received her BFA from the University of Illinois, Champaign, IL and her MFA from the School of the Art Institute of Chicago. Her work is in the holdings of such collections as Kirkland & Ellis (Chicago, San Francisco, and Houston) and Eaton Center in Cleveland, as well as numerous prestigious private collections. Recent commissions include installations at Naha Restaurant and Brindille Restaurant, which won the 2015 James Beard Award Winner for Outstanding Restaurant Design. She is currently the Director of Exhibitions at the Lubeznik Center for the Arts in Michigan City.

Emmett Kerrigan received his BFA from the Kansas City Art Institute in 1993. He also attended summer programs at Chautauqua School of Art and The School of the Art Institute of Chicago. He has shown extensively throughout the Midwest, including a solo exhibition at the Elmhurst Art Museum in 2010. His work can be found in numerous prestigious private and corporate collections, including Wellington Management, Kirkland & Ellis (Chicago, Houston and San Francisco), Eaton Corporation, William and Blair, The Bank of Montreal, the lobby of The East Bank Club, The Soho House, One Off, The Sandor Family Collection, amongst many others. This marks his eighth exhibition with the gallery.