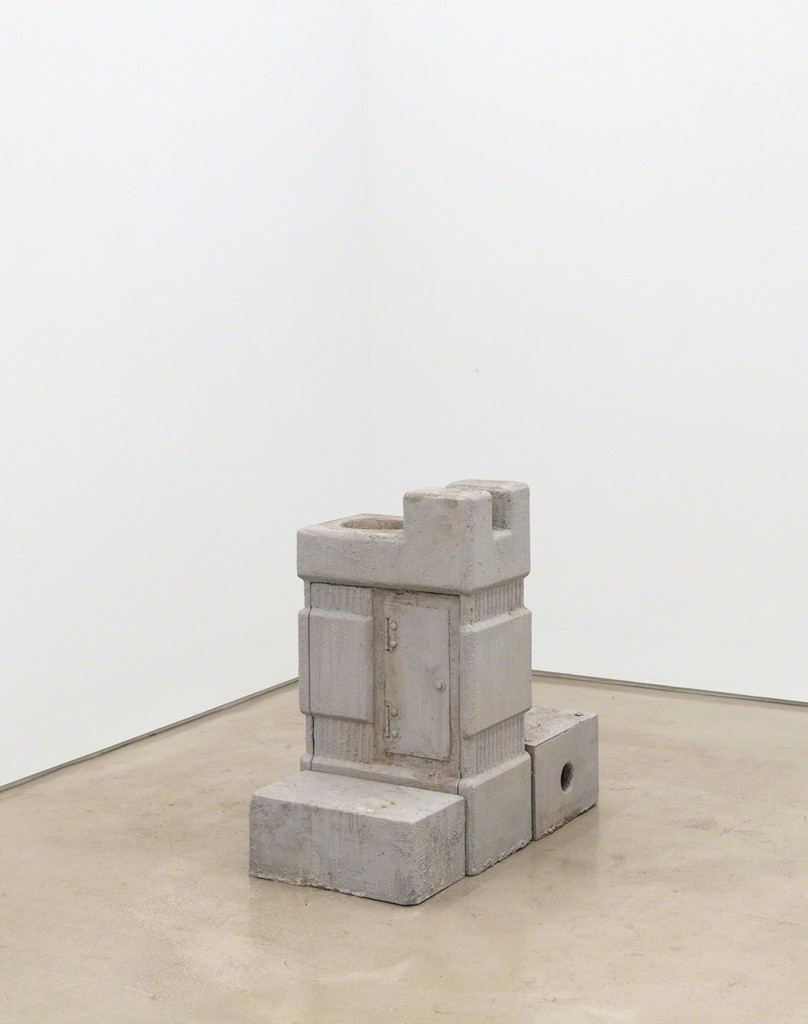 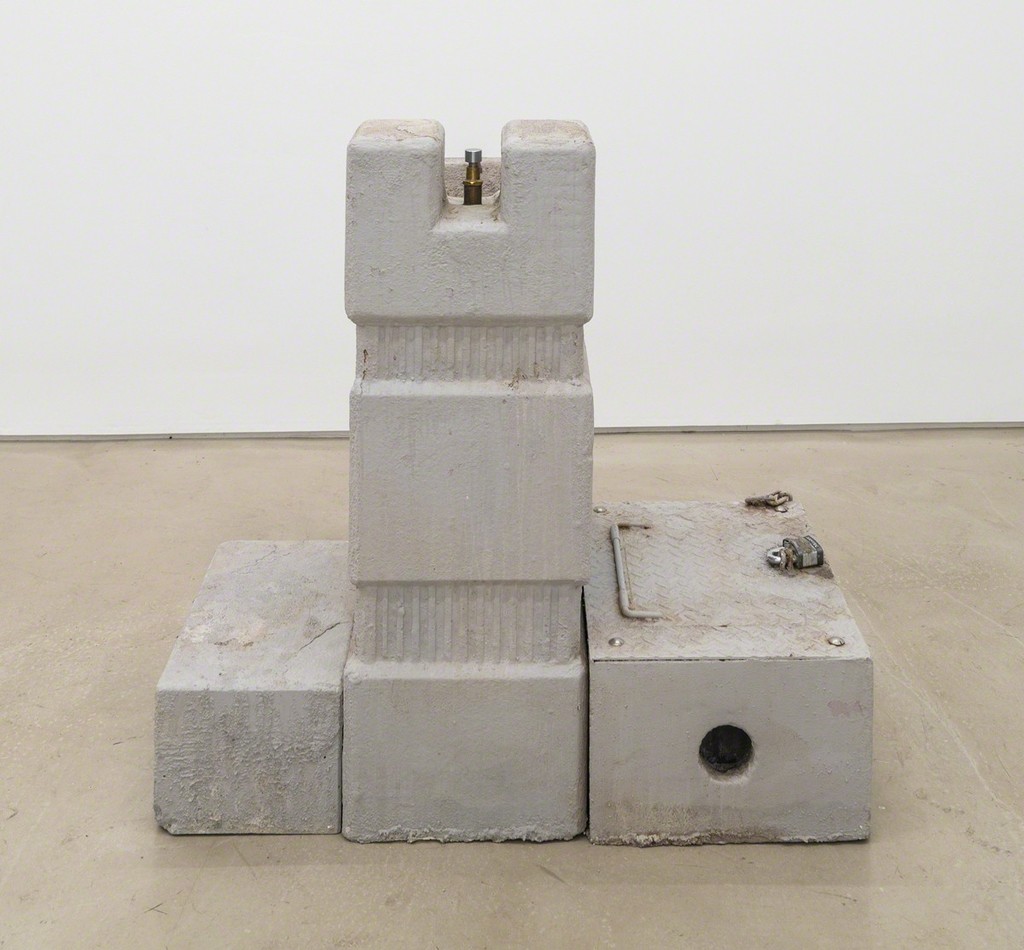 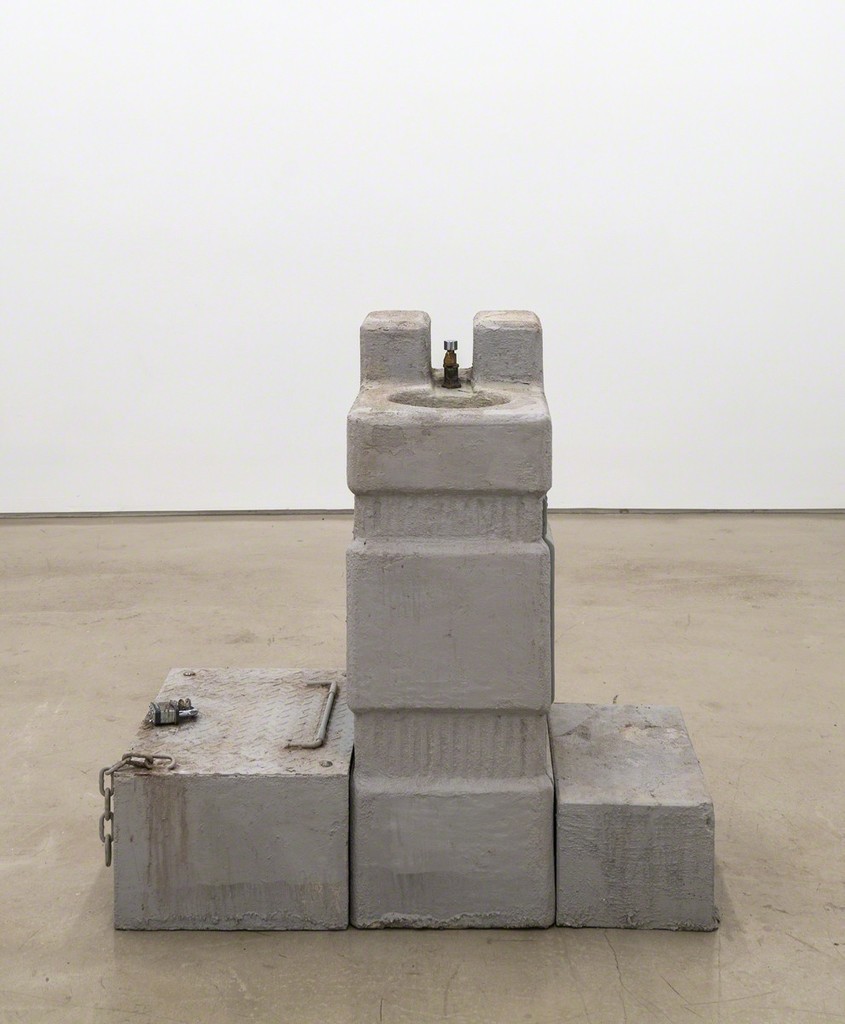 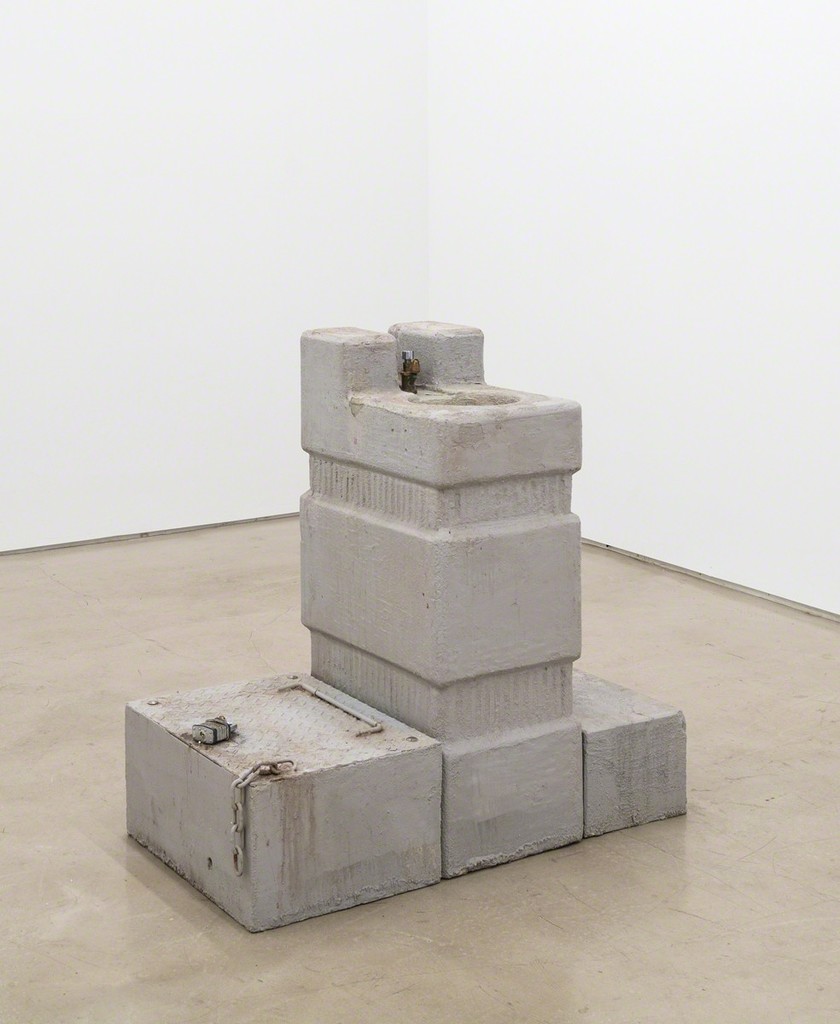 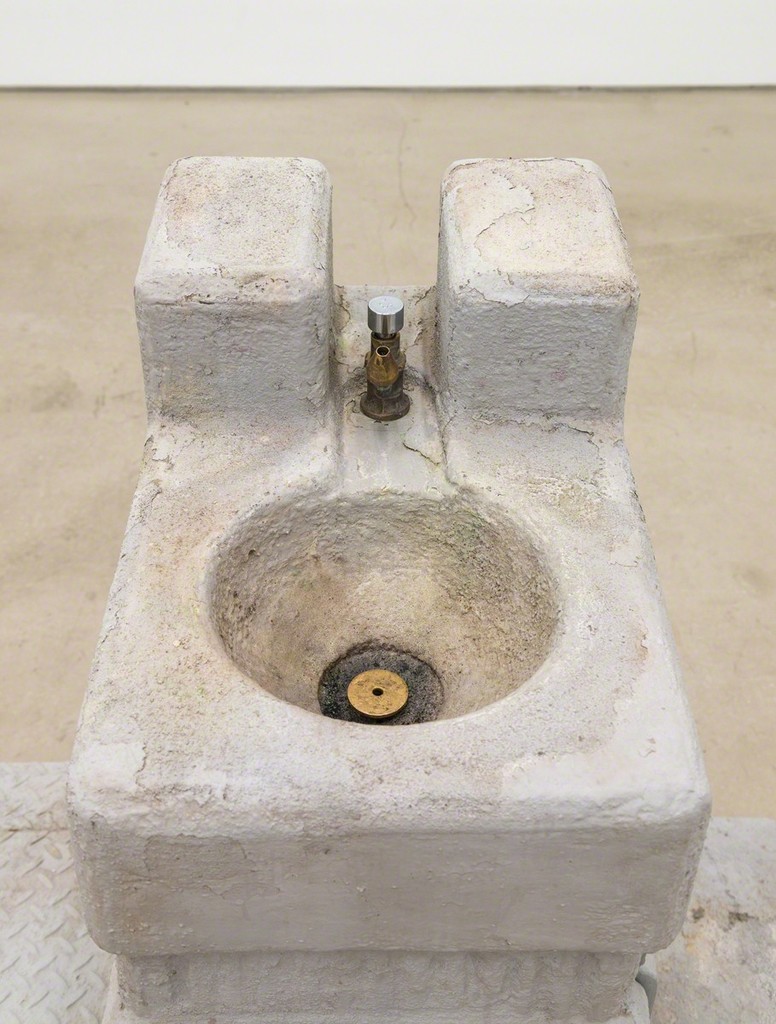 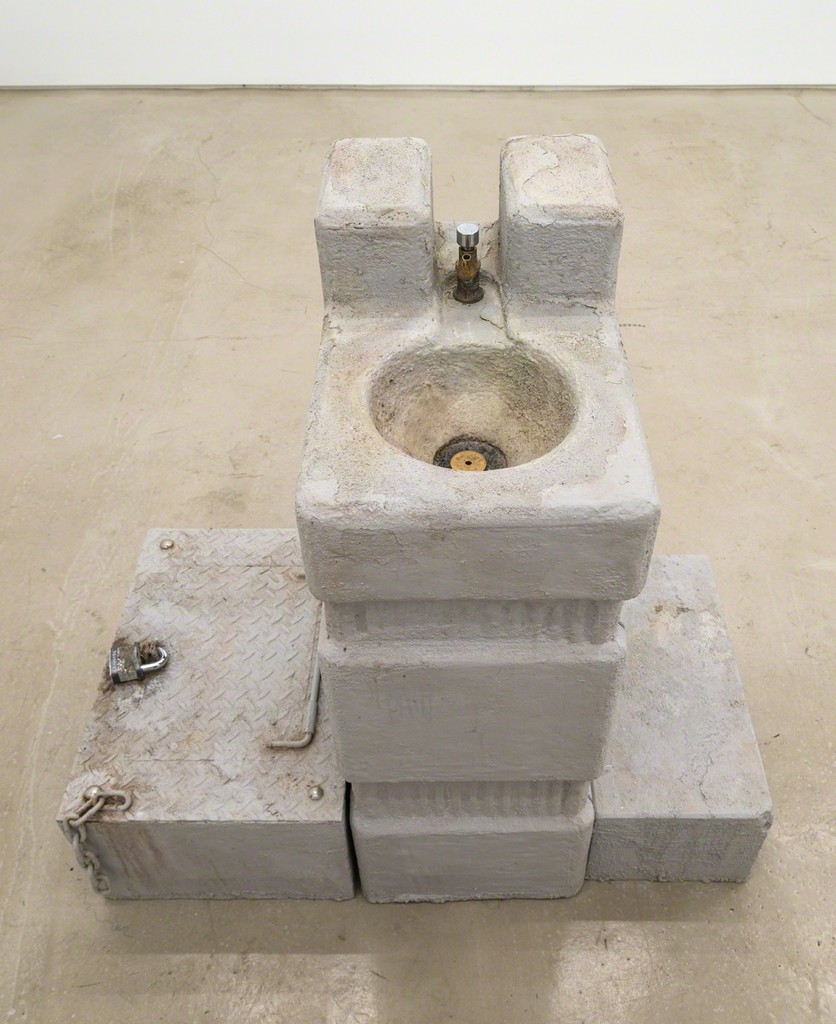 Lisa Cooley is pleased to present On What Remains, Part One, the first of a two part solo exhibition with the gallery by Fiona Connor. This is the artist’s first solo exhibition in New York, following her Newspaper Reading Club, New York Poster Project presented in collaboration with Michala Paludan as an offsite project with Lisa Cooley in October 2014.

“Can you describe this drinking fountain we see before us?” It’s June 4, 2015. Travis Diehl sits with Fiona Connor in her Burbank studio, discussing the first piece of her two-phase project at Lisa Cooley. “It’s a drinking fountain that’s in Tompkins Square Park. It’s a cast concrete drinking fountain that was designed in 1939. And it was installed in parks all over Manhattan and Queens.” Fiona will soon install a careful copy of the fountain in the back gallery; bulky, crenellated, fortress-like, the sculpture will be the only object in the show. “First of all I thought it was Brutalist, but then I realized that it was Art Deco, veiled in Brutalism, because it’s just, it had so many layers of paint and corrosion. It’s like, as we see it here, it’s gonna have, it needs another couple, maybe another couple of washes...”

Travis: How did you zero in on the drinking fountain as representative of Tompkins Square Park?

Fiona: Well, it’s an ongoing interest. I’ve explored the sculptural qualities of drinking fountains in the past. I guess I like how when presented in a gallery it appears to be quite a formal, minimalist thing. But when you approach it, it has this generosity in that it will be plumbed and working. It’s like you can drink from it and it kind of softens or turns round all the expectations you have of a hard minimalist sculpture.

T: Yeah. I’m imagining a scene where people are protesting in the park and they’re at the same time being kind of arrested or kicked out. And the water fountain, like amid the conflict, is this kind of symbol of another type of relationship between city and population. The park is supposed to be for everyone, or something. But then, all that’s forgotten somehow, you know?

F: Totally. Maybe it’s always a complicated relationship people have with public space. But actually, this way of having a show at a gallery felt like a really interesting way to charge the space with, like, a different psychic understanding.

T: Yeah, I mean, it’s also in a way just a piece of—what is it? It’s a fixture, it’s like having a sink. I mean it takes up space, but it doesn’t constitute an art show necessarily. It’s like, if you have a kitchen in the gallery, it’s not a kitchen “installation,” or …

F: Right, I mean, I hate the word, but it’s like a scripting. It connotes a particular type of behavior. Like, now that we’re providing water it means you can spend longer here. You can be nourished and hydrated.

T: How do you think about the transposition, or could you speak about, like moving, quote unquote, moving the fountain a few blocks from Tompkins Square Park into the gallery?

F: Right. Like, this one-to-one drawing. I guess I get excited about the translation of the fountain ’cause it’s like, bordering on invisible. And I like the idea that it can dissolve or diffuse into reality. So in that way it starts to highlight the conditions of its presentation and its position. But then there is something else going on too. Maybe it is like, using the strategies or the aesthetic of dry institutional critique, like moving or framing something. But I’m actually like, you know, obviously tripping balls about making layers and layers of paint, turps and concrete. And so it’s a weird mixture between a material investigation and then, like, more of a contextual investigation. So, I think that’s the weirdness, maybe, that still hasn’t really been—I’m still not at peace with it and I maybe never will be.

T: Right, well I think the trick about it is, for example with something as fraught as Tompkins Square Park, to not just see it as a pretty water fountain, or something like that. Like, you know, your term “found minimalism.” It’s a little bit like, I don’t know what the word is, like cheeky, or something, ’cause it’s like, that’s selling the context short, right? It’s also important why and how this thing was built. Or the circumstances around it. Especially at a gallery adjacent the Essex Street Market. But there is also a reason you’re drawn to that context. It’s like the fountain is this rare instance of civic benevolence ...

F: Exactly. Exactly. And it’s almost like now that’s treated with skepticism. Like, “Really? This is okay to drink?” Like, “Shouldn’t we be drinking bottled water?” It’s gonna be in summer in New York so it might be really hot. And I like the idea that people are are gonna get really hot and want, you know, like—

F: Yeah, and there’s something about making yourself vulnerable when you’re going to have a drink as well. You’re ingesting something, and you don’t know if the thing’s gonna splash up in your eyes and—

T: Or if a bully is gonna grab you by your underwear.

F: Yeah! ’Cause it’s about sticking your lips out, right? I mean I think this work rewards the cheeky. Like, I’ve made this out of straight concrete. So if somebody wants to stand on there that’s okay. And, I’ve made these out of concrete so if somebody touches it, it’s okay, you know, it like feels like concrete. And then, also just touching the button is, like you’ll be rewarded. But it’s kind of an experiment ’cause the plumbing is pretty hack, you know? So, it’s like probably you press a button, it’ll be like, errrr, you know?

T: Yeah, well it’s often the case with a public fountain anyway that it kind of has crappy water pressure.