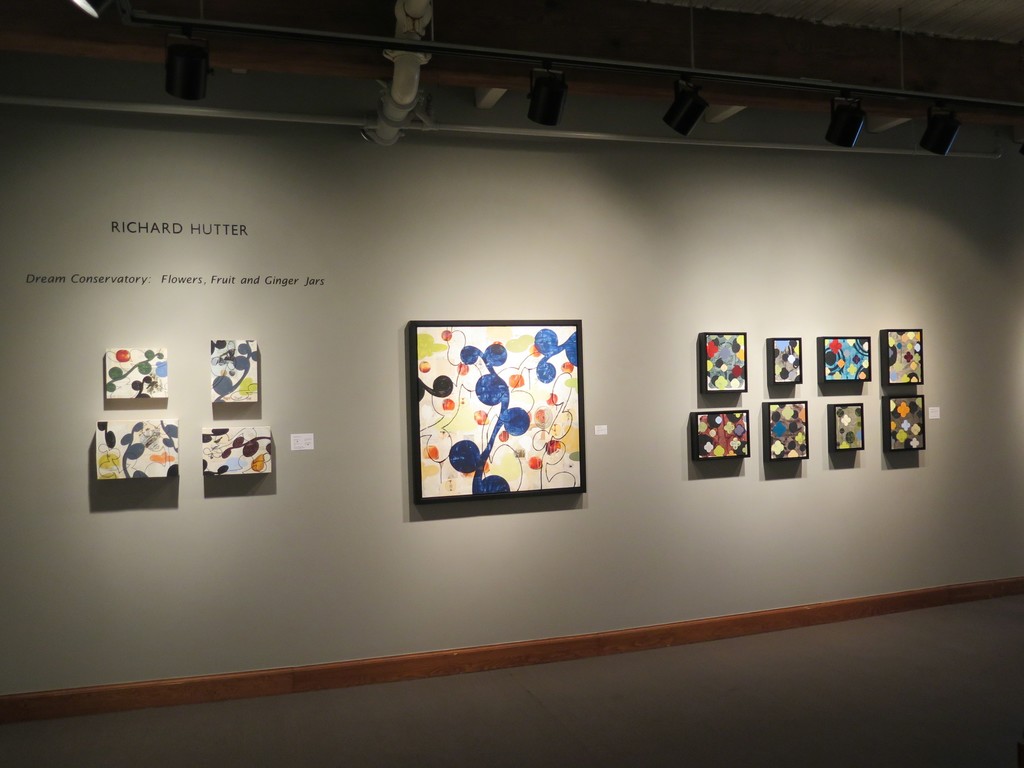 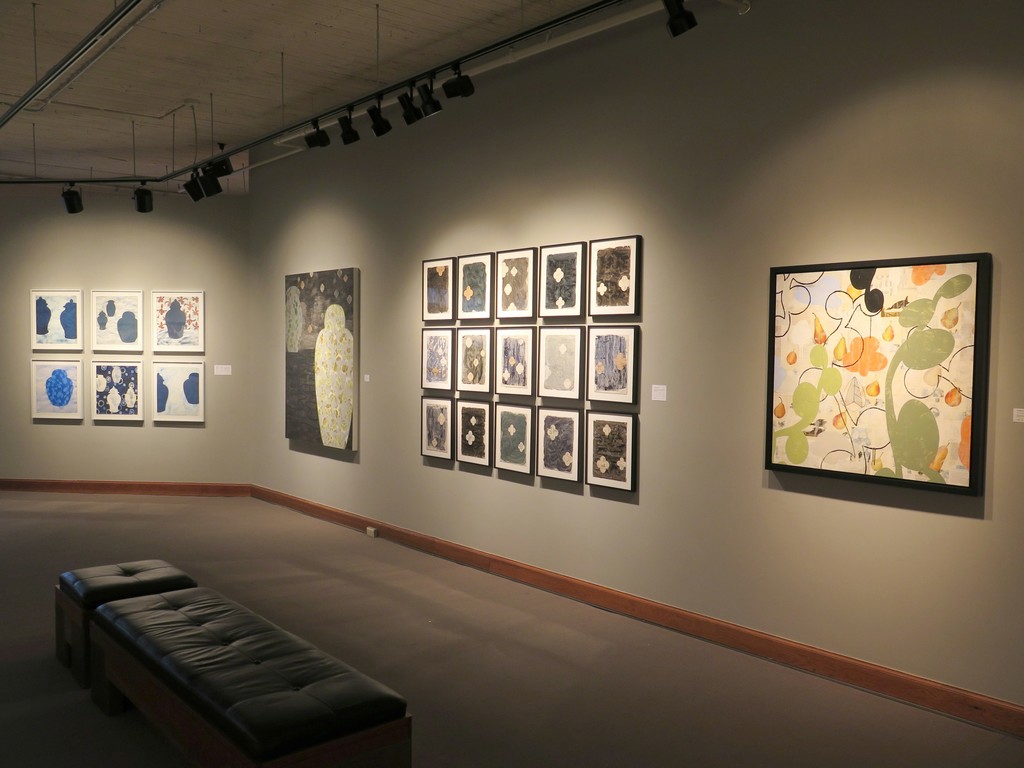 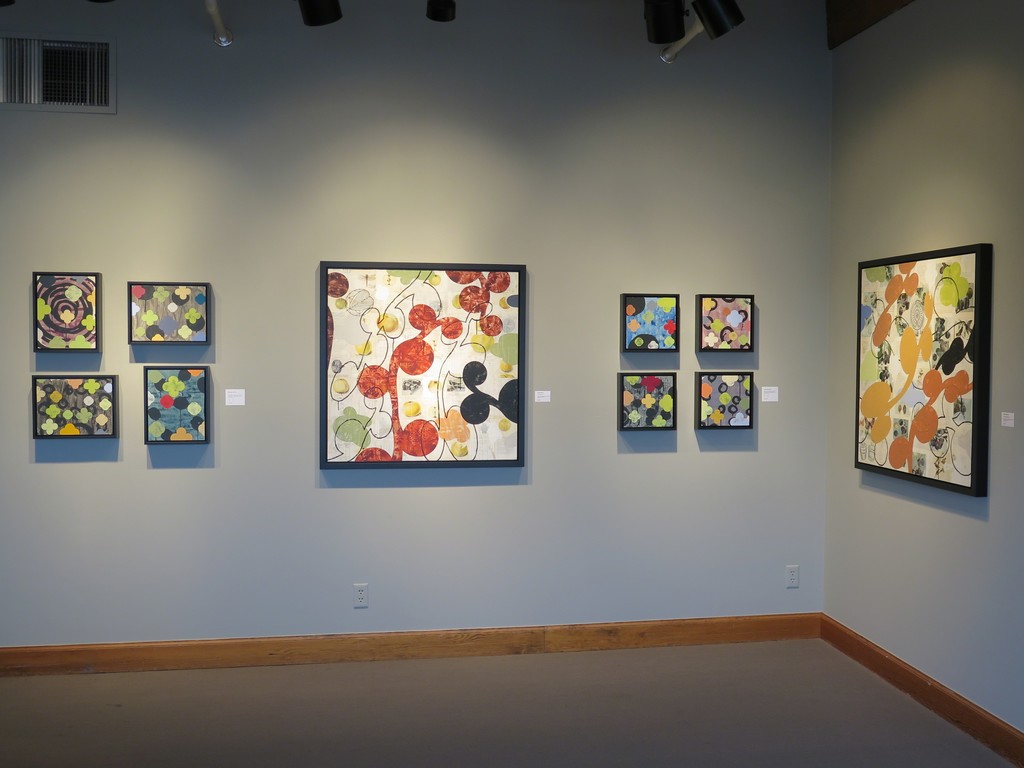 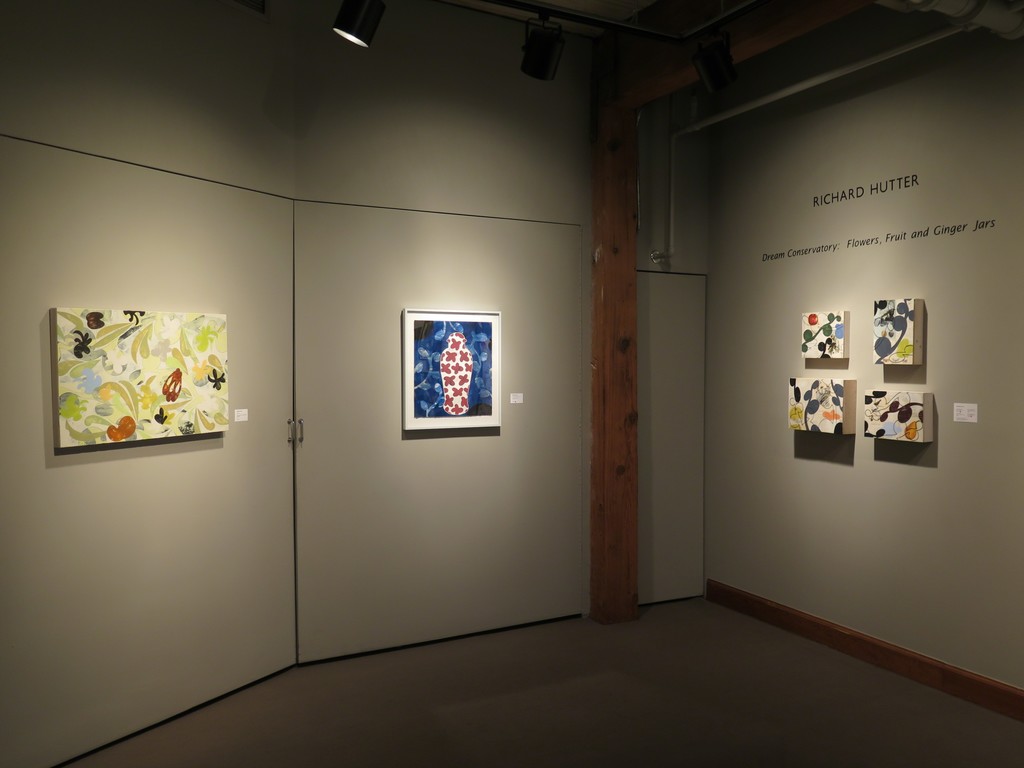 “Dream Conservatory: Flowers, Fruit and Ginger Jars” is the title of Richard Hutter’s newest body of mixed media works being featured at Lisa Harris Gallery this October. Unified by an ongoing exploration of still life forms, the recent mixed media works combine a range of mediums incorporating painting, collage, and drawing. The exhibition opens with a reception for the artist Thursday, October 1 from 6:00 to 8:00 p.m.
A conservatory, for Hutter, is “an indoor space where flowering and fruiting plants, far from their home climes, can be studied and loved by their caretakers.” Indeed, over the past two decades, Hutter has been creating a conservatory of his own; constructing a visual language where floral matter meets clean, repetitive line. His vocabulary blends minimal and pop aesthetics with vintage depictions and writings from textbooks and encyclopedias. In his series, “Pyrus” and “Prunus,” collaged images of fruits and text excerpts encounter repetitive forms defined by bold color and sharp edges. The titles of these works refer to Latin genus and species names for pear, plum, and apple trees; systems of classification, which echo Hutter’s analytical approach to translating these subjects. In a playful gesture, forms derived from mechanical diagrams mimic the organic, ovoid shapes of the fruit. Other works take exotic flowers encountered during the artist’s travels as their inspiration. Stylized forms based on seedpods, curving petals, and undulating vines are woven together in sophisticated conversation. A series of ginger jars brings the concept of the decorative object to the curated realm of the conservatory. Like the plants and fruits, these exotic decorative vessels represent yet another beautiful thing far from its origins.
A printmaker by training, Hutter has exhibited his work across the country over 25 years. His work has been included in a number of nationally organized exhibitions, including some juried by prominent curators at the Whitney Museum of American Art, the Museum of Modern Art, the Guggenheim Museum and Houston’s Contemporary Arts Museum. His work can be found in private and public collections, including University of Washington, Tacoma Art Museum, and King County Public Art Collection. He won a municipal design commission through the Mayor’s Office of Arts & Cultural Affairs and Seattle City Light’s 1% for Arts Funds for a large-scale public mural. The Illinois native has shown his work at Lisa Harris Gallery since 2000