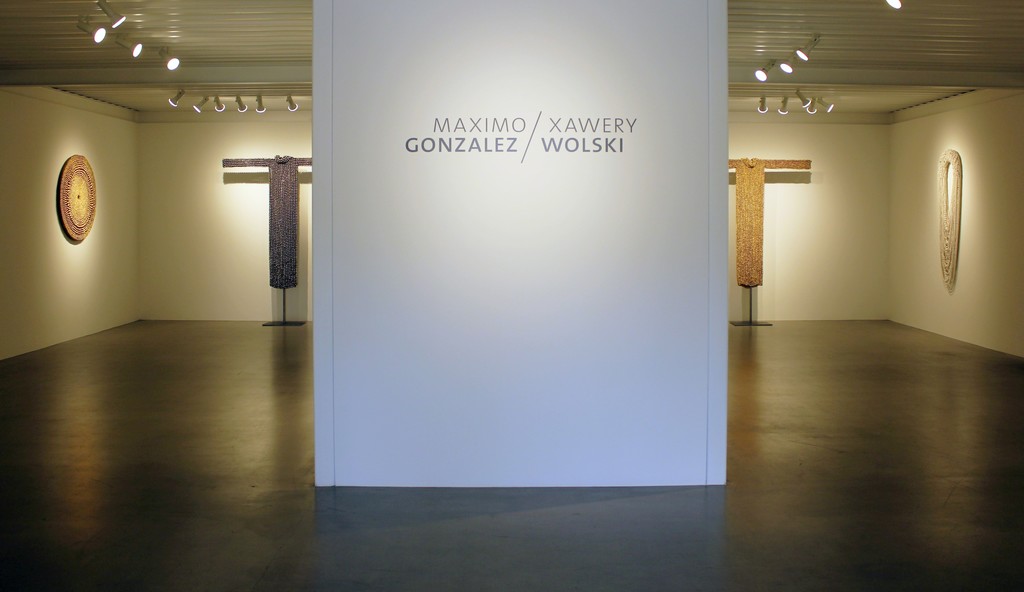 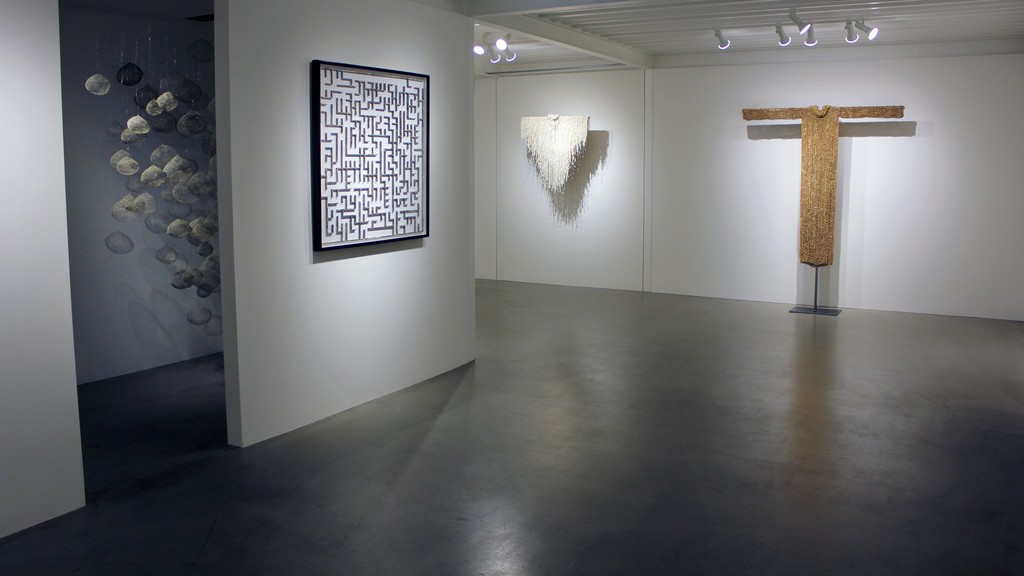 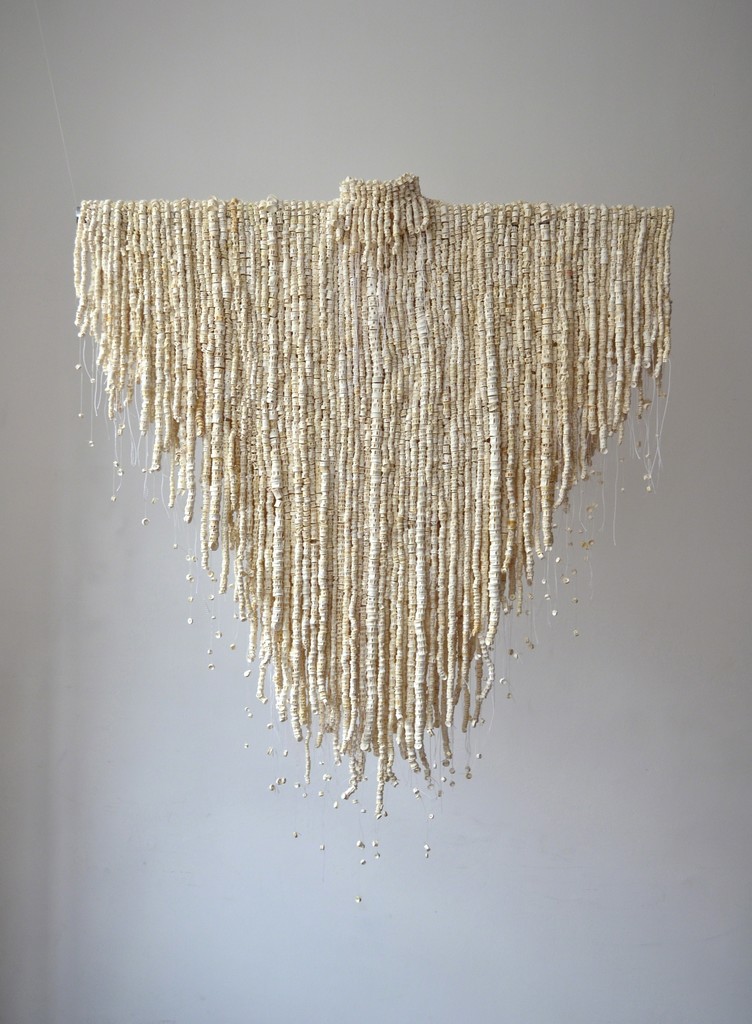 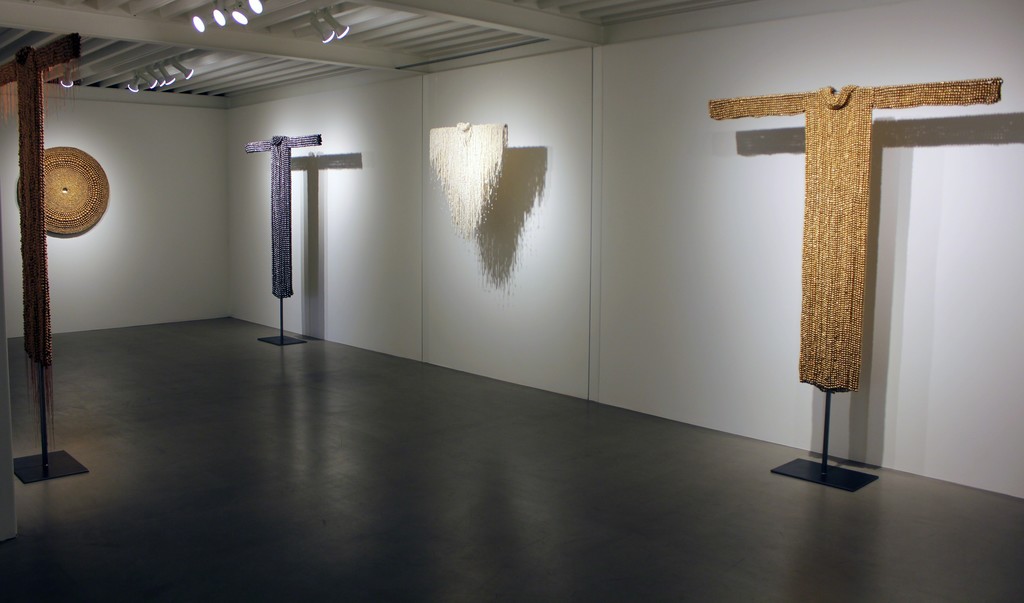 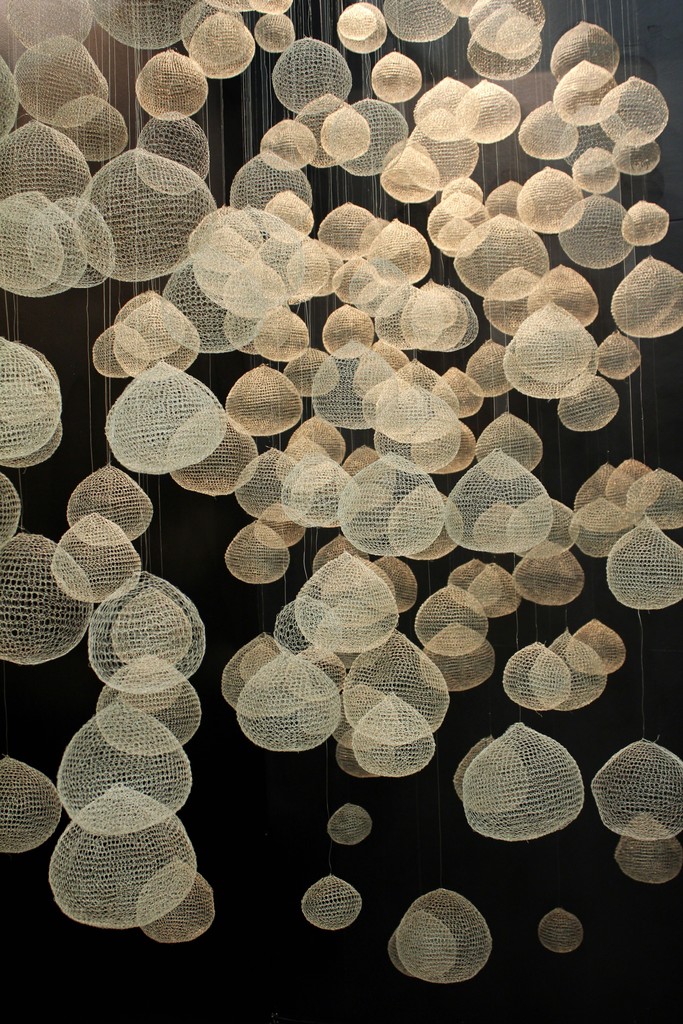 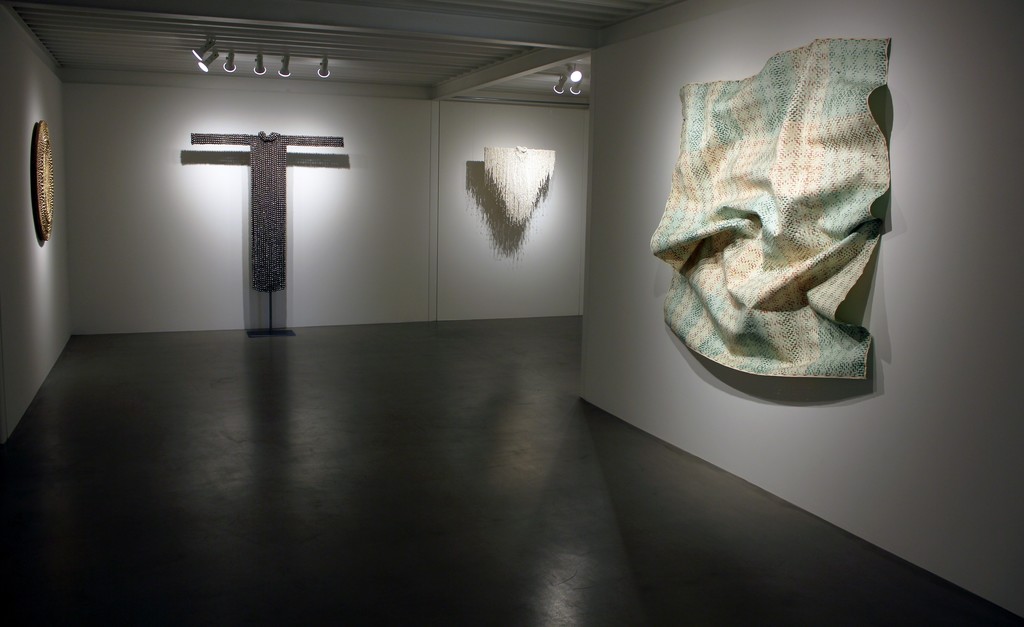 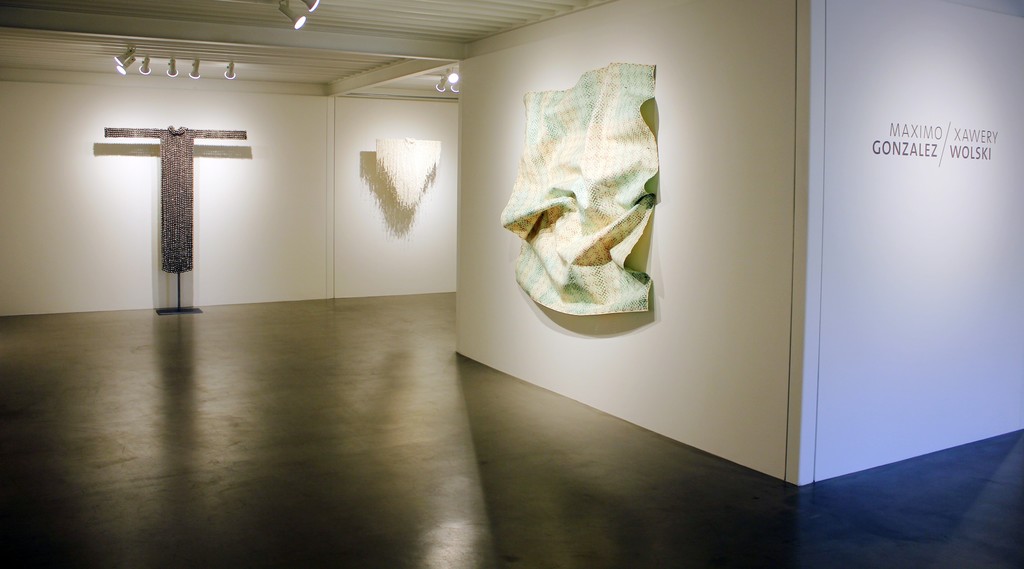 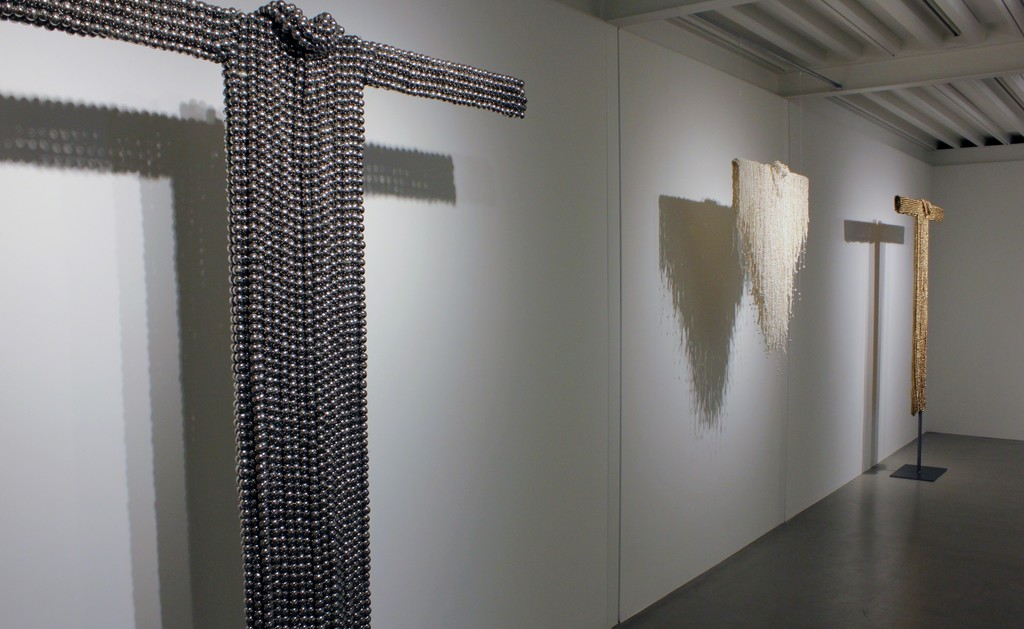 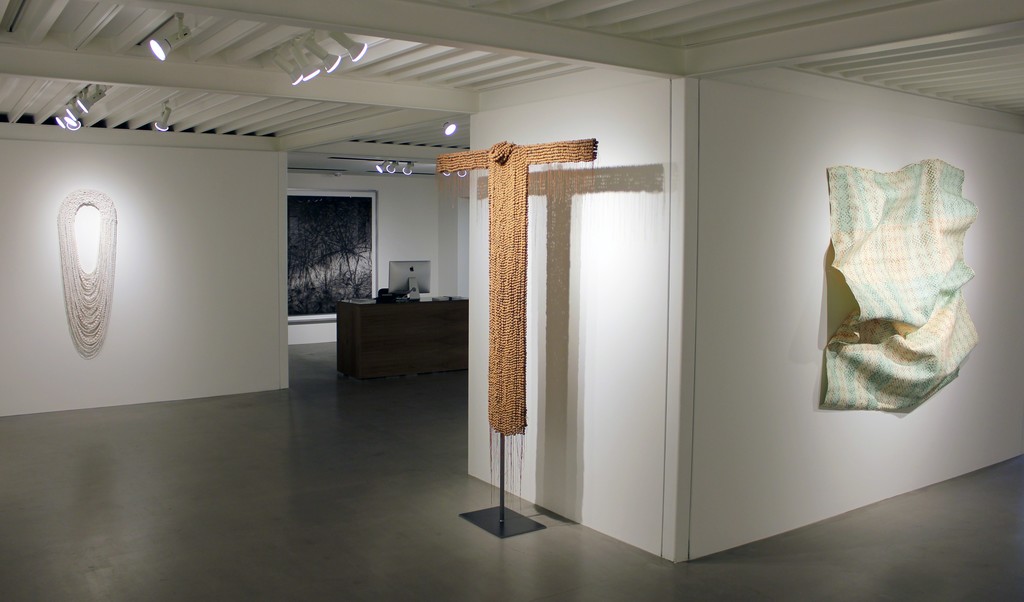 Spanning continents and generations, the works of Xawery Wolski and Maximo Gonzalez suggest an expansive new global order of art. Working in devalued currency (Gonzalez) and sculptural textiles (Wolski), both artists create philosophically provocative works from the raw materials of identity and memory, experimentation and tradition.

The works of Xawery Wolski arrive at Lisa Sette Gallery by way of Mexico City, where the sculptor lives and works after leaving communist Poland as a young art student. The son of a plant geneticist, Wolski blends a minimalist aesthetic with a sense of the complexity of design in the universe, presenting in archetypal and abstracted forms a refined, contemporary expression of the essential connectivity of nature.

Wolski’s cascading, organic installations seem to emanate a secret world from within a closed form. The sculptor’s Vestidos gather multitudes of clay or metal beads into enigmatic “vestments” which may recall ceremonial robes, crucifixes, or pinned specimens. In a striking piece that references traditions of both the Americas and Europe, a vestido composed of gold glazed terracotta beads presents a simple, shimmering image that bears the weight of history as elegantly as it proposes a modern grammar of object and form. Wolski’s work celebrates the inherent design of nature, while presenting subjects in their most essential form, with a sensual and reverent curiosity about the world.

Mexico City-based Maximo Gonzalez creates a sublime vernacular from civilization’s overlooked objects. The Argentinian-born artist has worked with detritus ranging from unspooled videotape to discarded aluminum flatware; he’s recognized internationally for scenes and installations composed of devalued currency. Gonzalez comments, “Reutilization as a form of vindication of disposed objects, by means of a transformation of these materials…is the uniting theme of my work.”

Gonzalez’s work with the devalued and obsolete currency of Mexico exemplifies the rigor of his conceptual and aesthetic investigation. His complex and delicate works executed in paper money are created using traditional making crafts such as punch-cutting, manual screen-printing, weaving, and a method similar to the Japanese cut-and-fold technique of kirigami. Through a series of labyrinths created with currency, Gonzalez delineates “the whimsical line of the division of territories, drawn conveniently for the one who traced it… a line that seeks to separate the inside and the outside, desire and wish, entering or leaving; a political labyrinth that is redrawn through centuries, always obeying the same line: the one that is traced by money.”