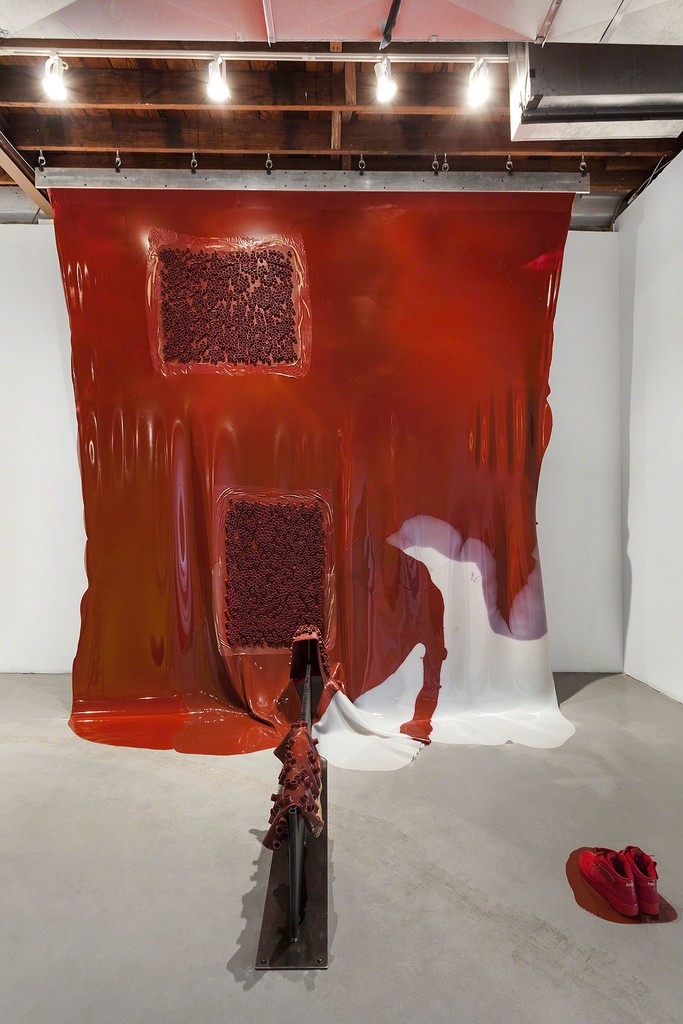 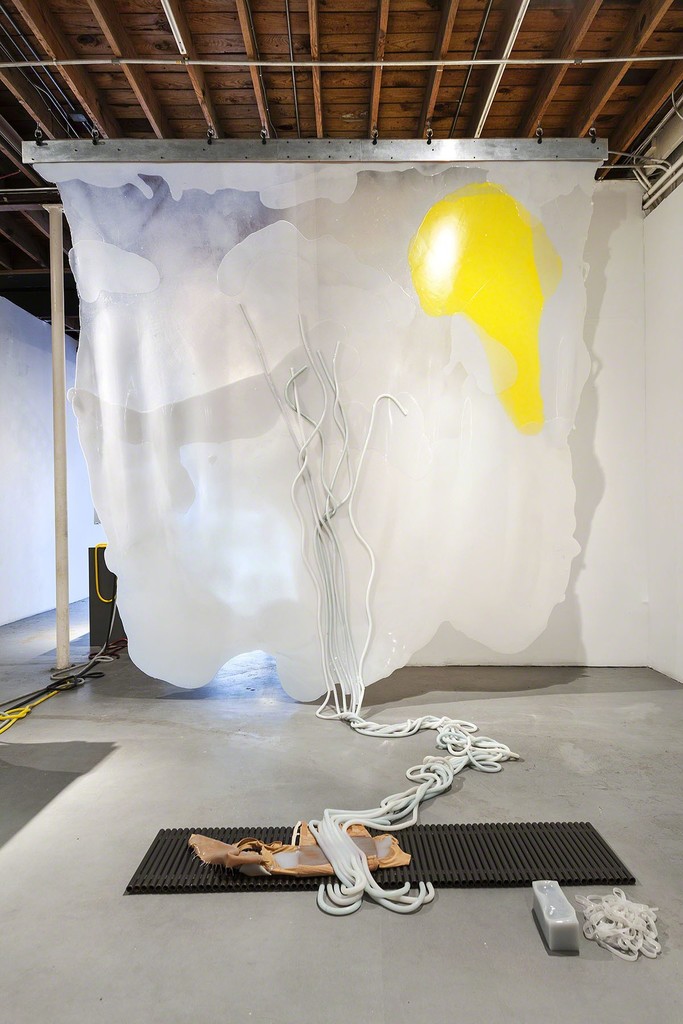 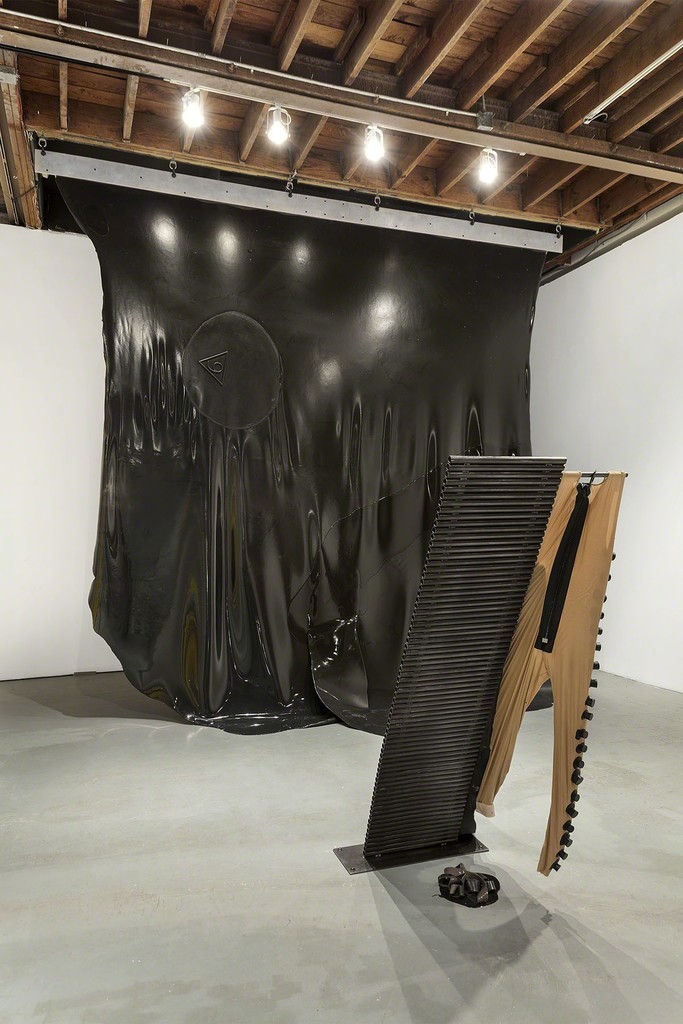 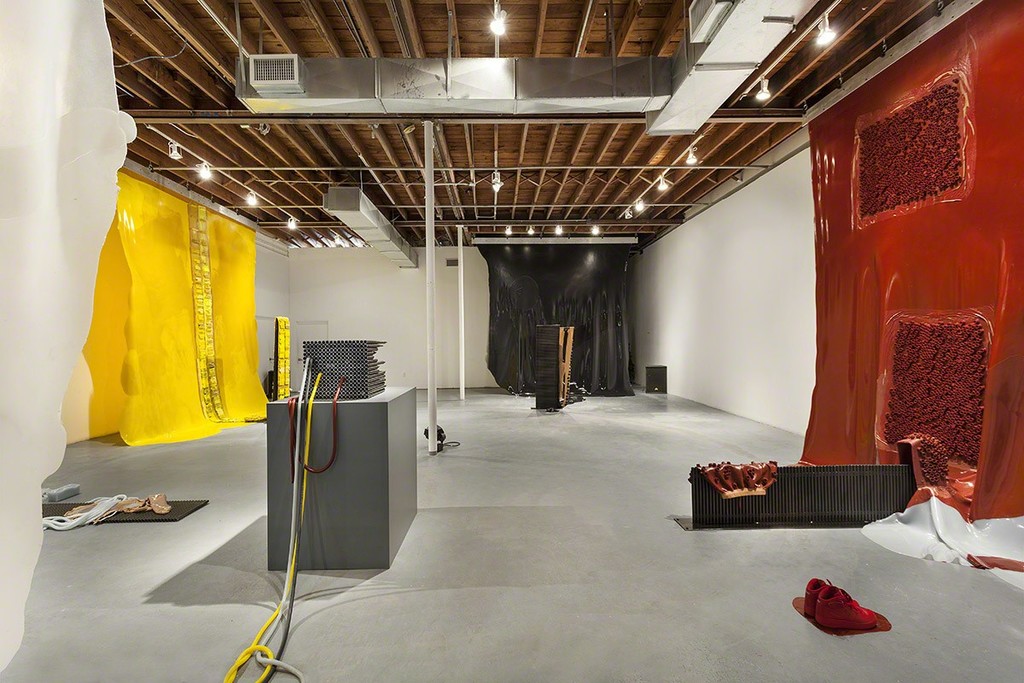 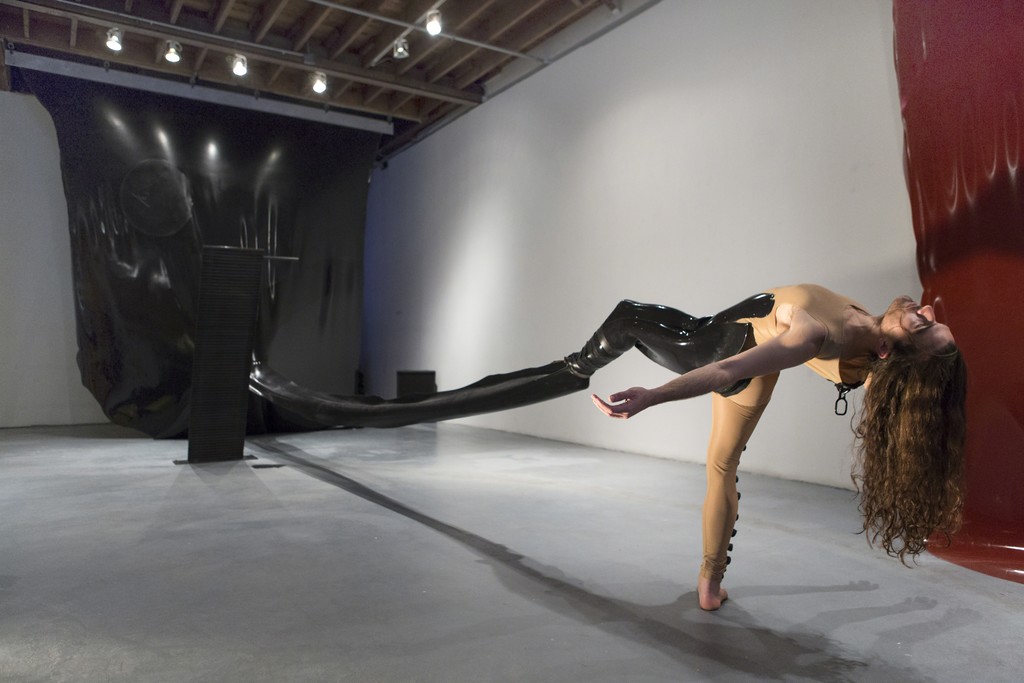 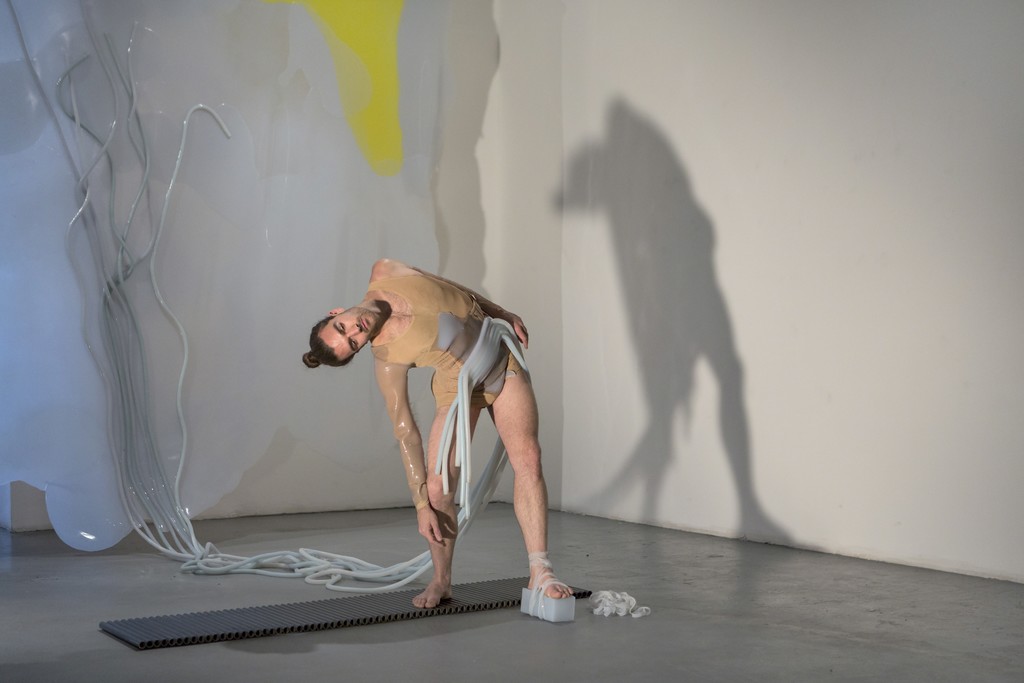 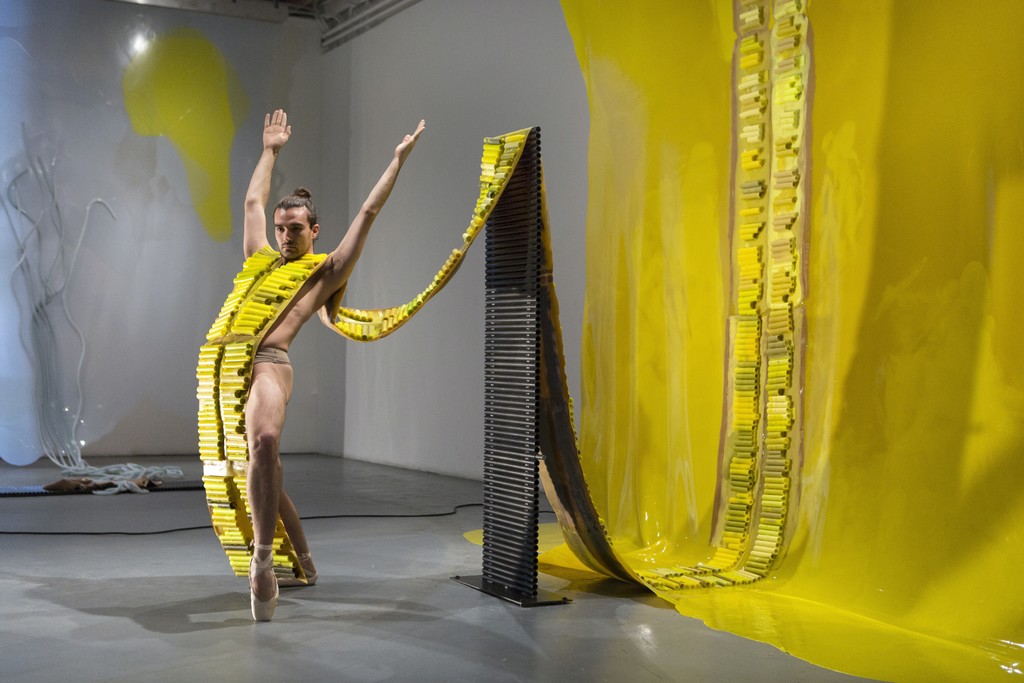 Locust Projects is pleased to present Pore, an exhibition of new work by Brooklyn-based artist Martha Friedman. For her first major show in Miami, Friedman has created four vividly colored sheets of rubber – made by pouring around 1000lb of the material onto Locust Projects’ floor – that have been rigged to cascade from the rafters. Each site-specific sculpture has a costume attached and is colored to reference one of the four humors, the theory of which formed the basis of Western medicine for over two thousand years.

Pore also includes a series of metal sculptures. Visitors are initially confronted by a monumental-scale necklace that hangs from the ceiling, based on an original piece constructed from a repurposed drain cover and paperclips. Further inside the exhibition is Cut Piece, a work that consists of dissected metal tubes with sharp points at its extremities, cross-sectioned like a medical school cadaver, oozing rubber appendages. Along the perimeter of the space, metal mannequins support the four costumes that are attached to the rubber pours.

During the exhibition’s opening weekend, as well as Art Basel week, New York choreographer/dancer Silas Riener will interact with the sculptural installation through a performance developed collaboratively with Friedman. Performing in the round, for a standing audience, Reiner will, in turn, put on each costume and dramatize a choreographed series of movements that explore the qualities associated with each humor.

Friedman often uses rubber and steel in her work as a way to explore form and substance, frequently confounding our conventional expectations of everyday objects by playing with their materiality and scale. These interests are a clear influence on Pore, an exhibition that presents a sculptural exploration of the vulnerability of the human body and the permeability of its borders.

ABOUT MARTHA FRIEDMAN
Martha Friedman was born in Detroit, MI and lives and works in Greenpoint, Brooklyn. She earned her BFA from the School of the Art Institute of Chicago in 1998 and her MFA from Yale University School of Art in 2003. She has had solo exhibitions at Wallspace, New York (2012, 2009, 2007); the Museum of Contemporary Art Detroit, MI (2010); DeCordova Museum and Sculpture Park, Lincoln, MA (2010); Shane Campbell Gallery, Chicago, IL (2010). Her work has been shown in numerous group exhibitions, nationally and internationally. Select examples include Frieze New York Sculpture Park, curated by Tom Eccles, New York (2013) and Museum on the Seam, Jerusalem, Israel (2013). Friedman is Assistant Professor of Sculpture at Princeton University.

ABOUT SILAS RIENER
Silas Riener has performed with Chantal Yzermans, Takehiro Ueyama, Christopher Williams, Joanna Kotze, Jonah Bokaer, Rebecca Lazier, Tere O'Connor, Wally Cardona, and Kota Yamazaki. He was a member of the Merce Cunningham Dance Company from 2007-2012. His own work has been curated at CATCH, LMCC's River to River Festival, Danspace Project, The Chocolate Factory, and at the BFI Gallery in Miami. He was a member of LMCC's Extended Life Dance Development Program, a 2014 City Center Choreographic Fellow, a Gibney Dance in Process Artist, and a Mellon Artist-in-Residence at The Newhouse Center for the Humanities at Wellesley College. He has been collaborating with Rashaun Mitchell since 2009.