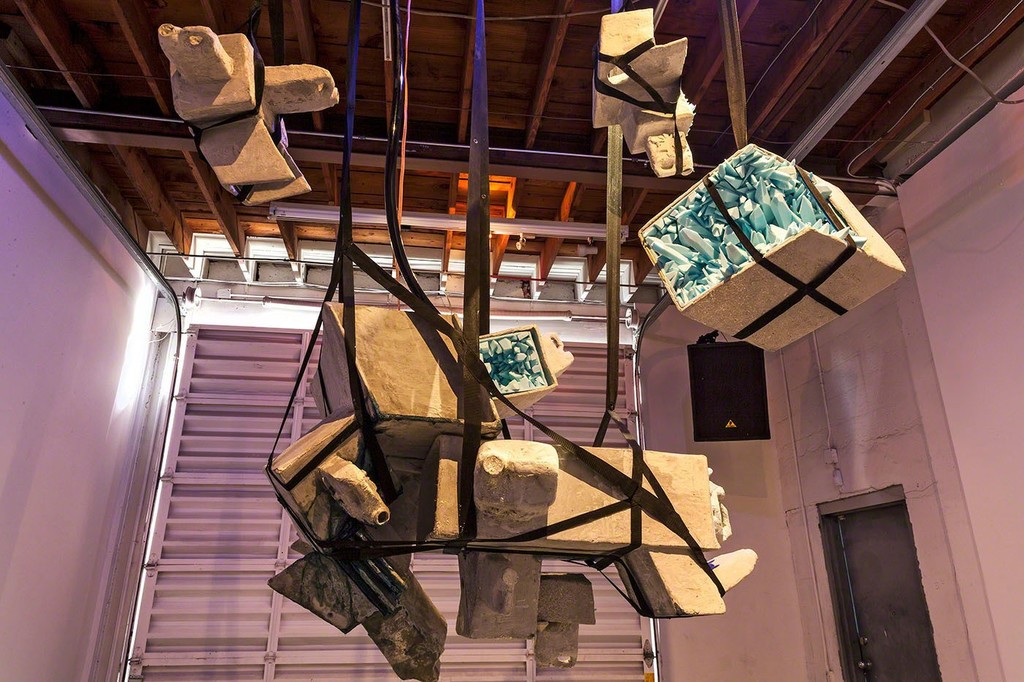 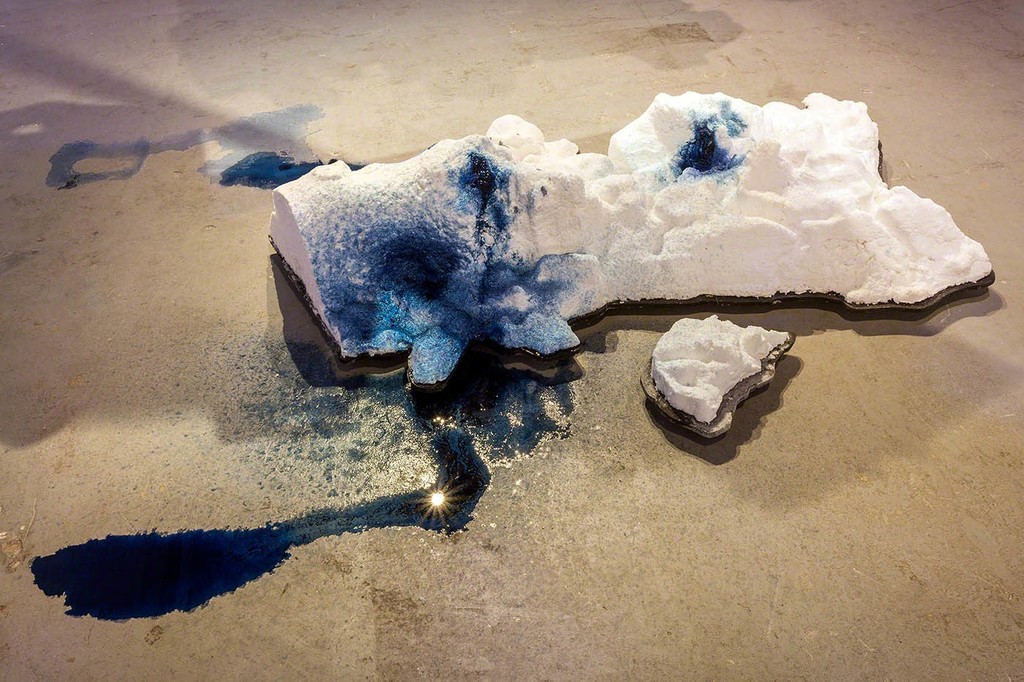 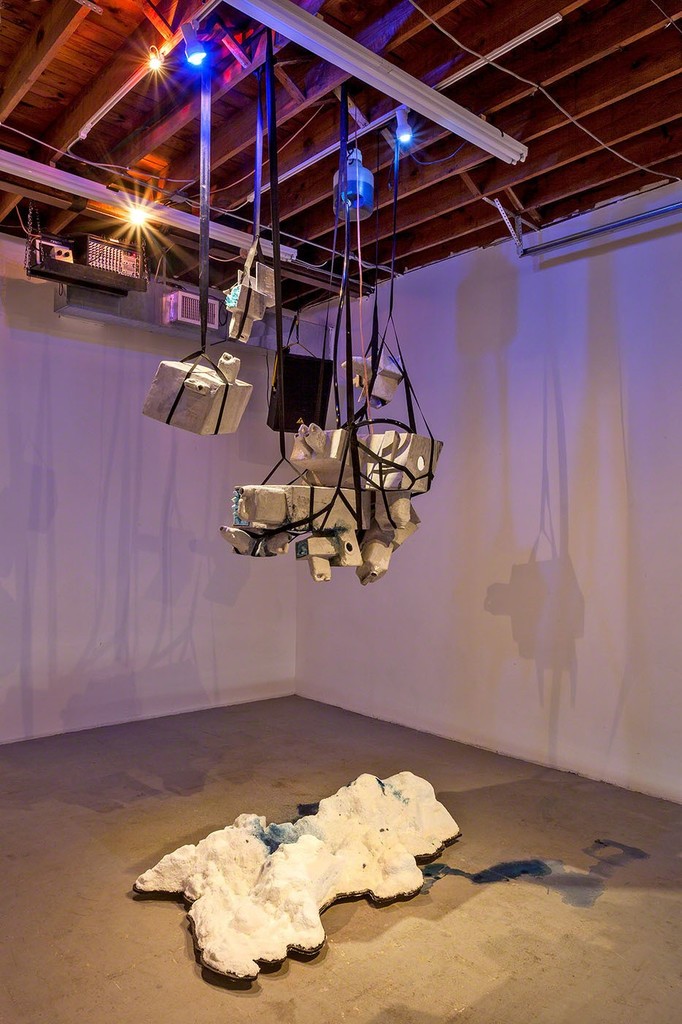 Working with a 3D scanner for the first time, Feuer has scanned areas of land that will soon be washed away into the Gulf of Mexico. Rendered in salt, these 3D scans are presented below hanging objects made from Styrofoam and concrete, and accompanied by live underwater sound recordings of glaciers melting and calving in the Arctic Circle. Feuer links this occurrence to Calgary, the economic epicenter of the Canadian oil industry and the origin of the proposed Keystone XL pipeline, and then to Miami, one of the most vulnerable cities in the world to rising sea levels and climate change. The sound recording from the Arctic Circle is an important component of Feuer’s concurrent sculptural installations in Miami and Calgary, as it acts as an external trigger that activates a physical change, resulting in the dripping of an indigo blue aniline dye onto the salt and the gallery floor. This particular dye was one of the first substances to be synthetically produced through an industrial process.

Feuer is interested in sites where humans’ actions have visibly impacted upon the landscape. Her work makes connections between our dependency upon the hydrocarbon industry and petroleum derivatives, and the rapid and often catastrophic changes that this can cause. Recently Feuer has been conducting research on the federally unrecognized Biloxi Chitimacha-Choctaw Indian tribes, the Pointe au Chien and Isle de Jean Charles, who live among the bayous of southern Louisiana. These coastal communities are experiencing an unprecedented loss of land due to aggressive tides, salt water erosion, soil composition fluctuations, rising sea levels, and the increased frequency of extreme weather, such as hurricanes. Above all, these tribes have also had to cope with devastating environmental impacts resulting from the actions of the petroleum industry, such as canal dredging and construction, and large-scale oil spills.

This project was developed in association with Grant Deane, a Research Oceanographer from the Scripps Institute of Oceanography in San Diego, California. Mesh is part of an interrelated solo exhibition Synthetic Seasons, opening at the Esker Foundation in Calgary, Canada, on May 22, 2015.

ABOUT MIA FEUER
Mia Feuer lives and works in Oakland, California, where she is an Assistant Professor of Sculpture at California College of the Arts. Born in Winnipeg, Canada, Feuer received her BFA from the University of Manitoba in 2004 and her MFA from the Department of Sculpture + Extended Media at Virginia Commonwealth University in 2009. She has received numerous national and international grants and fellowships. Feuer won the 2011 Trawick Prize and received the prestigious Joseph S. Stauffer Prize from the Canada Council for the Arts in 2012. She also created and curated The Flooded Lecture Series which took place on the Anacostia River during fall 2014 in Washington DC. Feuer will be artist in residence at the Va Space Residency in Isfahan, Iran in the summer of 2015 and an artist in residence at The Gulkistan Residency in Laugarvatni, Iceland in 2016. Her upcoming exhibitions include Champagne Life at the Saatchi Gallery in London, UK.

ABOUT LOCUST PROJECTS
Locust Projects is a not for profit exhibition space dedicated to providing contemporary visual artists the freedom to experiment with new ideas without the pressures of gallery sales or limitations of conventional exhibition spaces. Local, national and international artists are encouraged to create site-specific installations as an extension of their representative work. Locust Projects supports the local community through educational initiatives and programming that are free to the public.