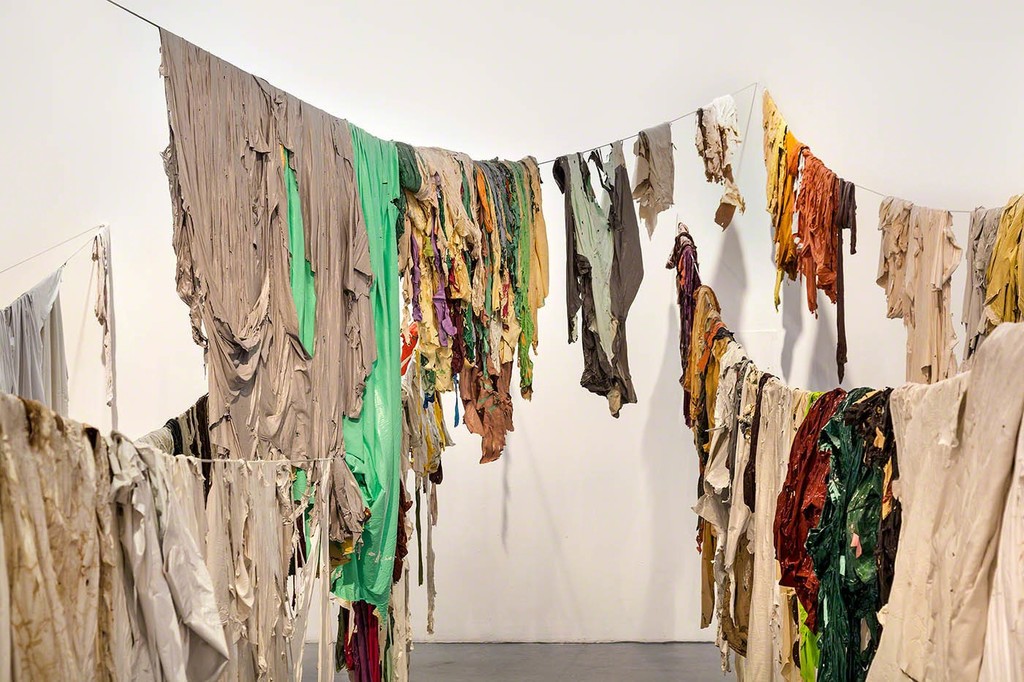 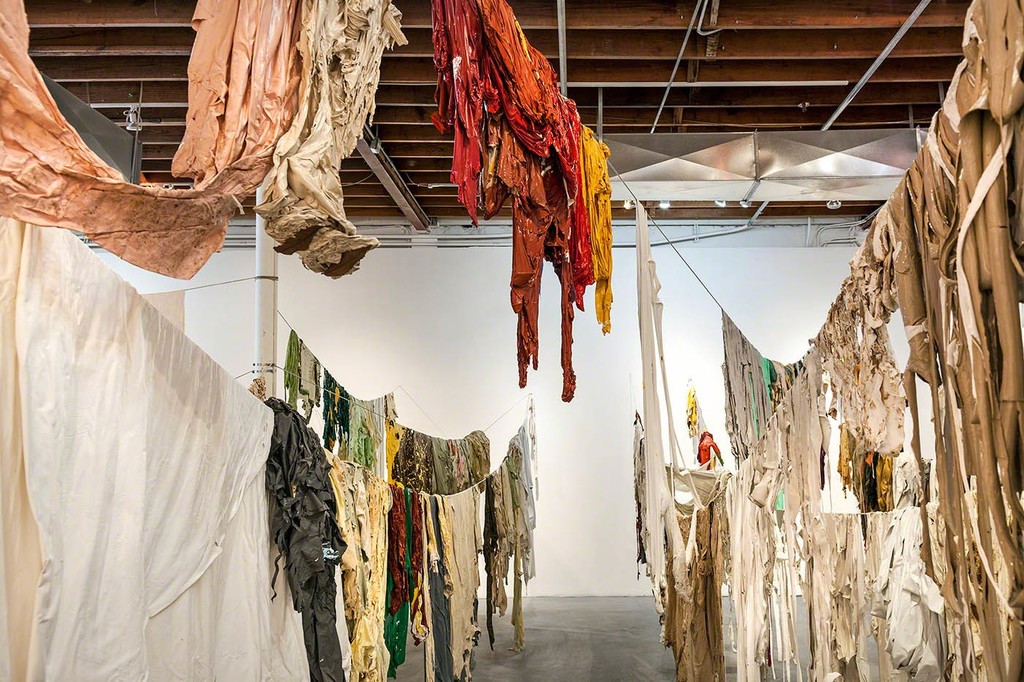 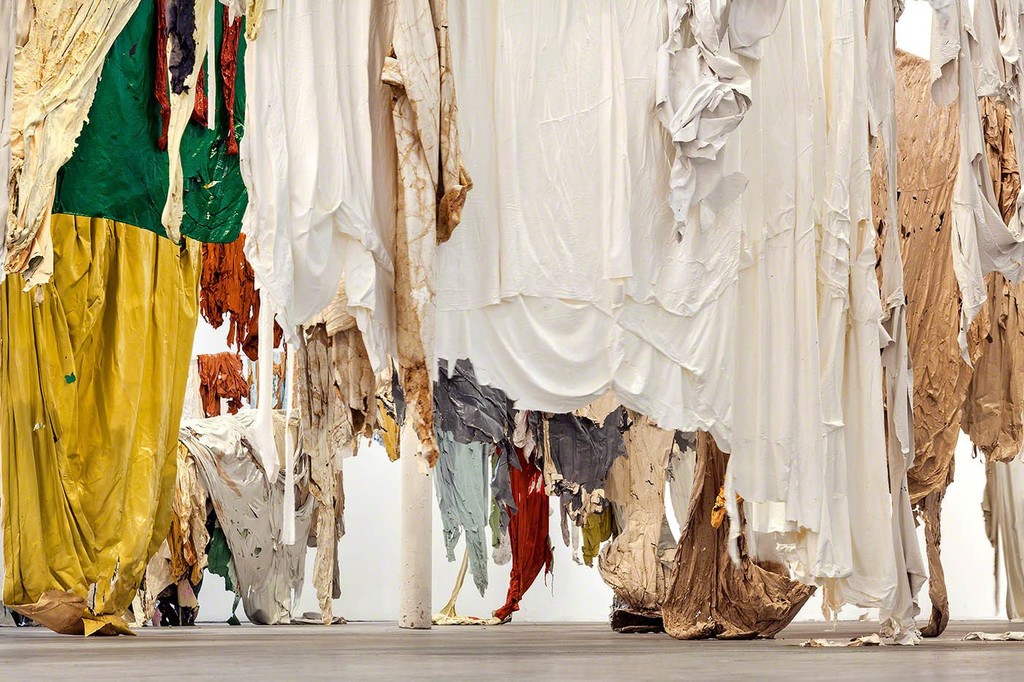 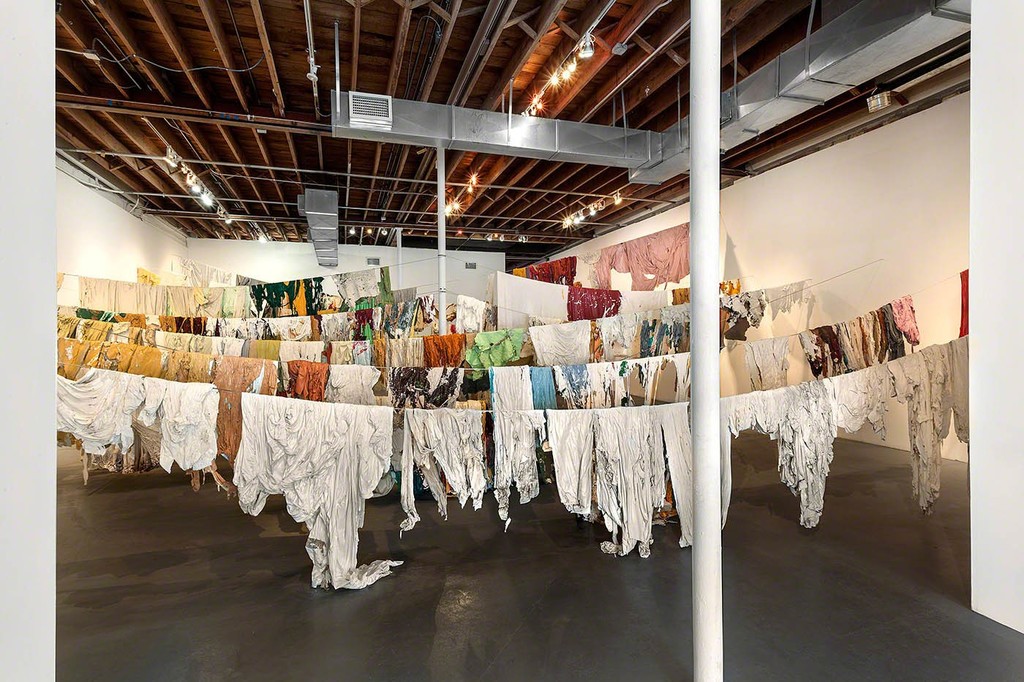 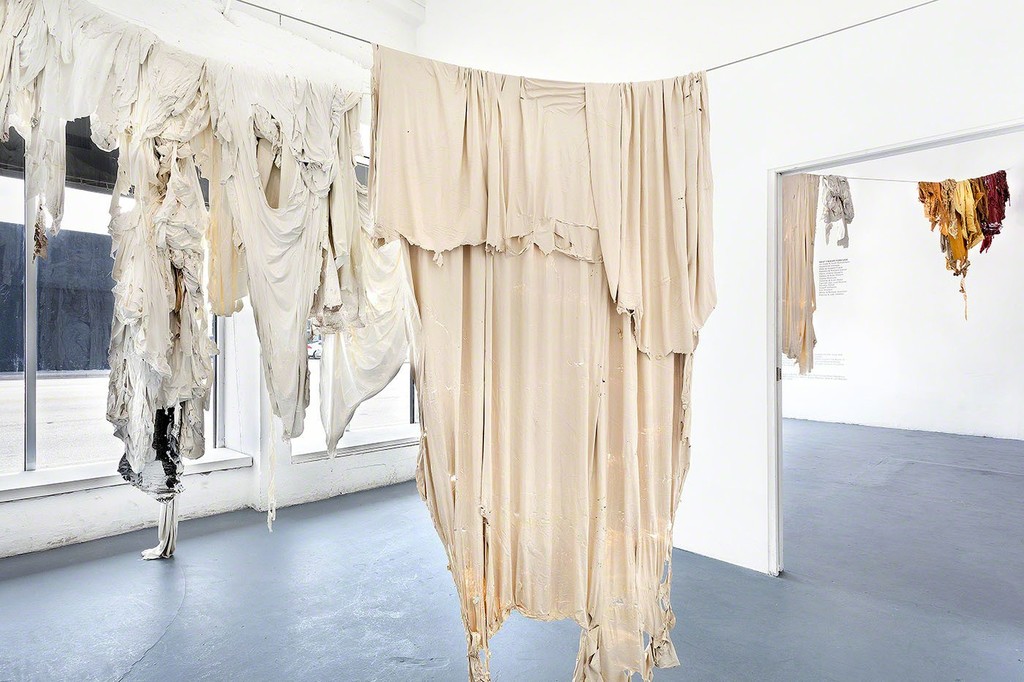 Locust Projects is pleased to present What Happens When Nothing Happens, a new site-specific work by Miami-based artist Roberto Gómez. For his first public solo exhibition, Gómez has crisscrossed Locust Projects’ main space with clothesline, on which he has hung a series of cloth-like objects made from layers of latex paint. Gómez blurs the boundary between painting and sculpture, emphasizing the physicality and materiality of paint by utilizing it as a three-dimensional element. He plays with the audience’s expectations by presenting objects made of paint “masquerading” as cloth, in a configuration more often encountered outdoors than in.
What Happens When Nothing Happens builds upon Gómez’s works on canvas, created through the repeated application of layers of found paint sourced from local chemical waste management sites. At Locust Projects, Gómez has done away with the traditional canvas support, creating objects by pouring paint directly onto plastic sheets placed on the ground. Once the paint has started to dry, he peels it away from the plastic and manipulates it into the desired shape, which can be hung over a line. The repeated acts of pouring, peeling, molding and hanging reflect the repetitious character of many everyday tasks and can seem “work-like”, but the production of Gómez’s objects also has some of the qualities of “play”. The artist employs a basic set of rules, which enable him to produce each object through a balance of serendipity and control. Physical and aesthetic qualities are dictated by the intrinsic characteristics of the artist’s found materials (such as color and paint type), while Gómez chooses which colors to combine, and manipulates the paint into its final form.
Gómez’s practice interrogates the ways in which quotidian objects and actions structure daily life, and reflect social behaviors. Clotheslines intersect the landscape of many countries across the world, including Costa Rica where Gómez grew up, yet while washing and drying clothes is a repeated action that punctuates our lives, in some places it is rare to see laundry hanging outside. The presence — or lack — of clotheslines in a landscape can be an indicator of culture, class and socio-economic status.

ABOUT ROBERTO GÓMEZ
Roberto Gómez (b. 1983) was born in San José, Costa Rica, and lives and works in Miami. He graduated with a BFA in Painting and Art History from New World School of the Arts/University of Florida in 2007. Gómez has exhibited at a number of local venues, and had a solo exhibition at Art Media Gallery in Miami in 2012. His work was featured as part of Locust Projects’ booth at NADA in Miami Beach in 2014.