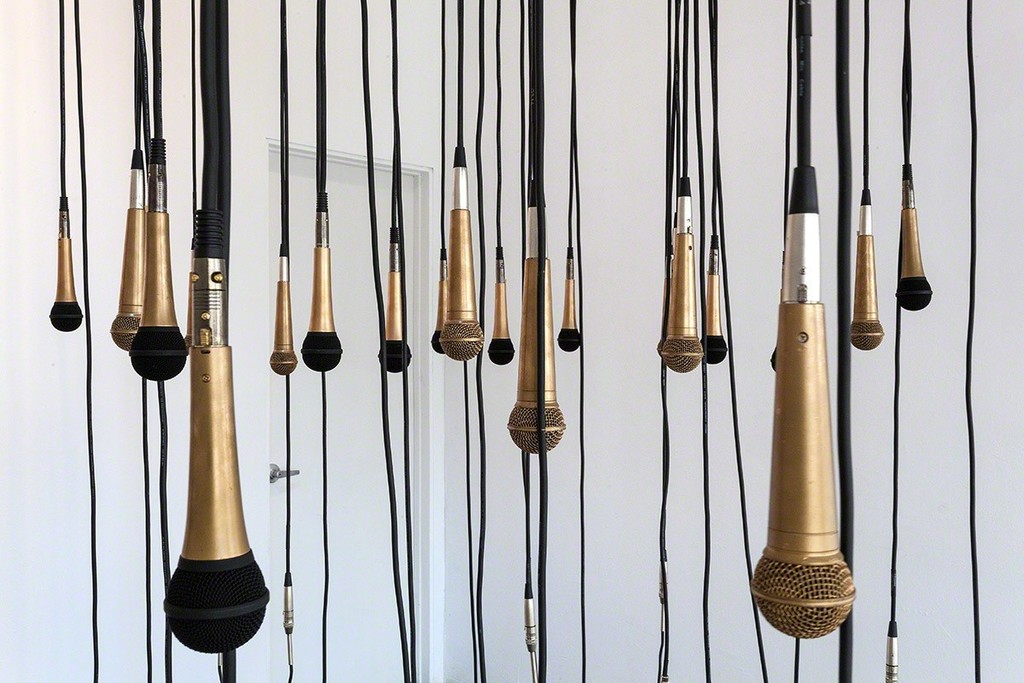 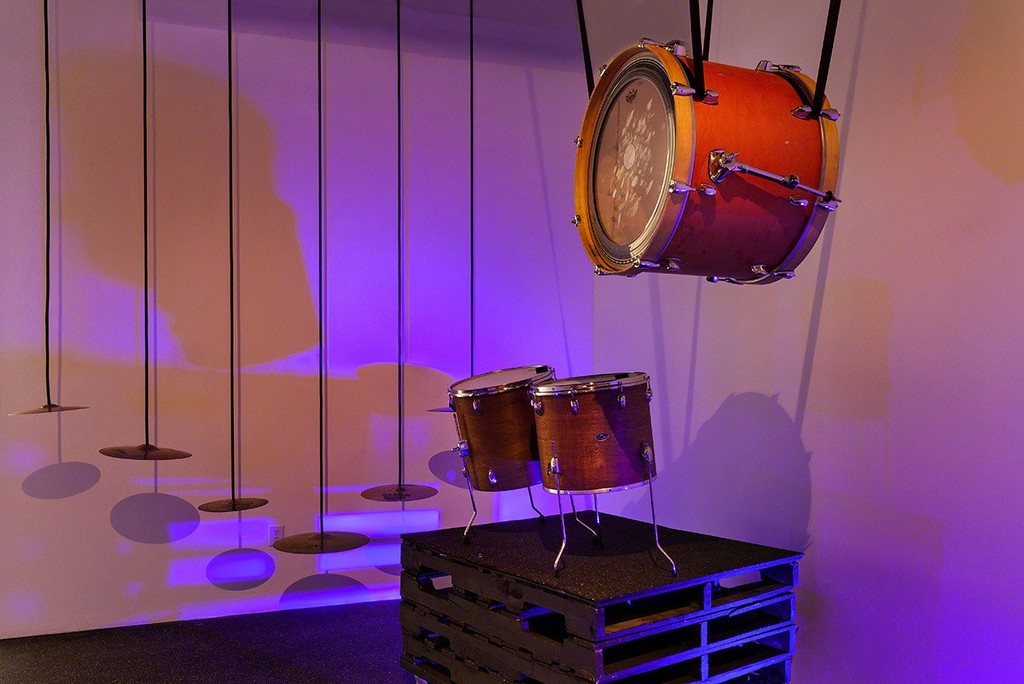 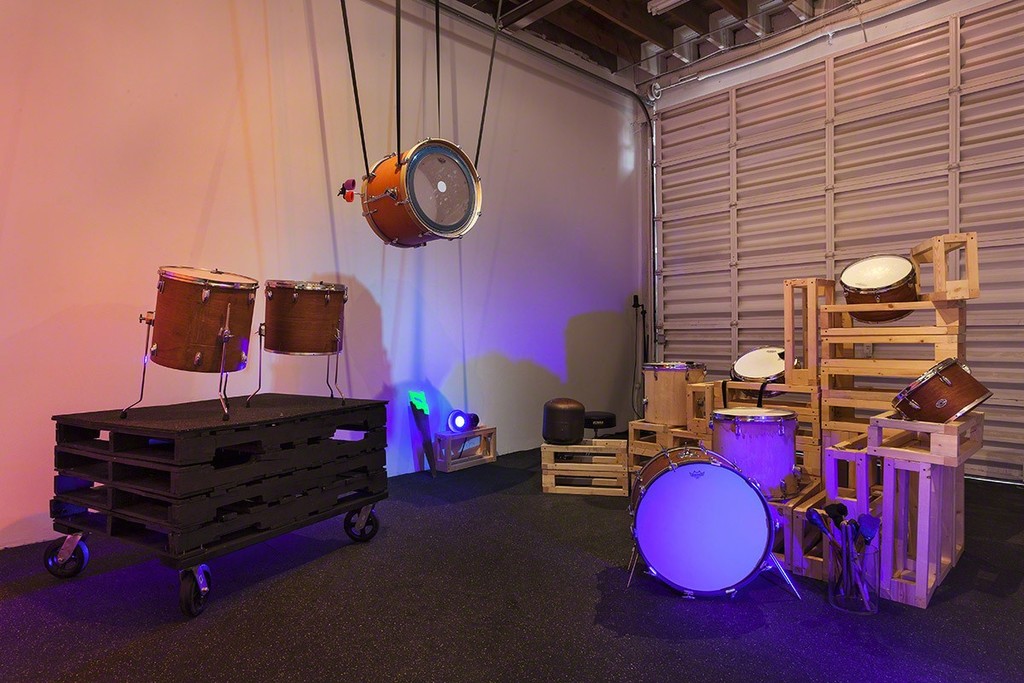 Eight artists from the east and west coasts have been invited to join Felecia Chizuko Carlisle and Valerie George and activate the space throughout the course of the exhibition. Each artist will leave behind an artifact or trace of their performance—wearable microphone assemblages, amplified piano strings, suspended drum heads, components for an unbuilt stage, musical saws and jugs, and ephemera from creative and collaborative processes— so that the installation is always in flux. These events open dialogues about sound as a medium, hybrid forms, making community through collaboration and building a historical narrative. The formal outcomes of the Sounding Room project are a result of free exchange and experimentation as artists use the gallery space as a think-tank and studio.

Three performance nights are scheduled during the exhibition:

Saturday, February 28  Opening Performance
Mindy Abovitz will perform on drums and cymbals installed throughout the galleries. Christy Gast will perform a live soundtrack for a video by Ian Szydlowski of a melting glacier. Molly Zuckerman-Hartung will explore distortion and stream-of-consciousness in the creative process. Felecia Chizuko Carlisle will perform on an installation of amplified piano strings, and Valerie George will activate her microphone sculpture with wearable components.

Saturday, March 21 Mid-Exhibition Performance
During an event choreographed by Daren Kendall, amplified noise will be mediated and remixed by artist Eli Lehrhoff, creating a live improvisational soundtrack. They will be accompanied by Al Torres, a low rider driver from Red’s Miami.

Visitors will be invited to interact, experiment and generate their own impromptu compositions during a series of community events. Each event will be recorded for the Nam June Psyche Archive, a project Valerie George began in 2010 to document experimental sound projects across the US.

ABOUT THE ARTISTS
Mindy Abovitz is a drummer and founder/publisher of Tom Tom Magazine, a magazine for women drummers. She has produced museum takeover events with female drummers at MoMA/PS1 in New York and PAMM in Miami. Terry Berlier is a California-based sculptor whose kinetic, interactive and sound-based work has been exhibited at the Contemporary Jewish Museum, San Jose Institute of Contemporary Art, and Montalvo Arts Center in California; Babel Gallery in Norway; and FemArt Mostra D’Art De Dones in Barcelona. Based in Miami, Felecia Chizuko Carlisle received her MFA from the San Francisco Art Institute. Her work has been exhibited at Vizcaya Museum and Gardens, Miami Art Museum, Dimensions Variable and Emerson Dorsch in Miami; Runnels Gallery in New Mexico; and the PudelCollection in Hamburg, Germany. Her work in this exhibition is supported by a grant from the Foundation for Contemporary Arts. Luciano Chessa is a composer, performer, and musicologist and has been active in Europe, the U.S., Australia, and South America. His book Luigi Russolo Futurist: Noise, Visual Arts, and the Occult is the first monograph ever to be dedicated to Russolo and his Art of Noise. Christy Gast is a sculptor and video artist who often incorporates folk songs into her work. She has recently exhibited at the Kadist Foundation in Paris; and PAMM, the Bass Museum of Art and Gallery Diet in Miami. Valerie George is a sculptor and musician from Pensacola, FL, where she is faculty at University of West Florida. She has toured the US under the moniker Nam June Psyche, recording visual and aural collaborations with other artists. She works primarily in sculptural and time-based media to explore sonic performance, concepts of place and non-place, the archival document and the art object. Eli Lehrhoff is a Brooklyn-based visual artist who makes music with Dubknowdub and Hair Jail. For his yearly marathon improvisation festival Smhoakstock, he performs with seventy collaborators over twenty-four hours. Daren Kendall creates large-scale sculptures that can function as instruments or sites for performance. His work has been reviewed by Flash Art, New York Arts, and The New York Times. Ian Szydlowski is a Chilean printmaker and sound artist who works in Brooklyn. Molly Zuckerman-Hartung, known for her paintings, came of age in Olympia, Washington’s indie punk scene. Her work has been exhibited around internationally, and was included in the 2014 Whitney Biennial.

ABOUT LOCUST PROJECTS
Locust Projects is a not-for-profit exhibition space founded by three Miami artists in order to provide contemporary visual artists the freedom to experiment with new ideas and methods without the limitations of conventional exhibition spaces. Artists are encouraged to create site-specific installations as an extension of their representative work, and Locust Projects offers them a vibrant Miami experience to develop their ideas. Locust Projects is committed to offering an approachable and inviting venue for the Miami and international art community to experience the work and meet the artists.