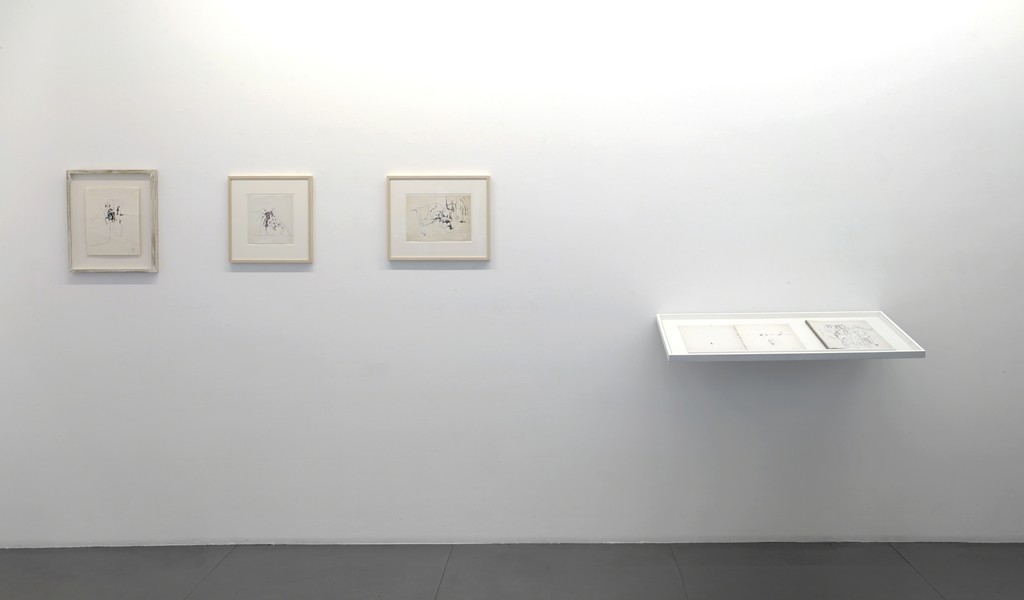 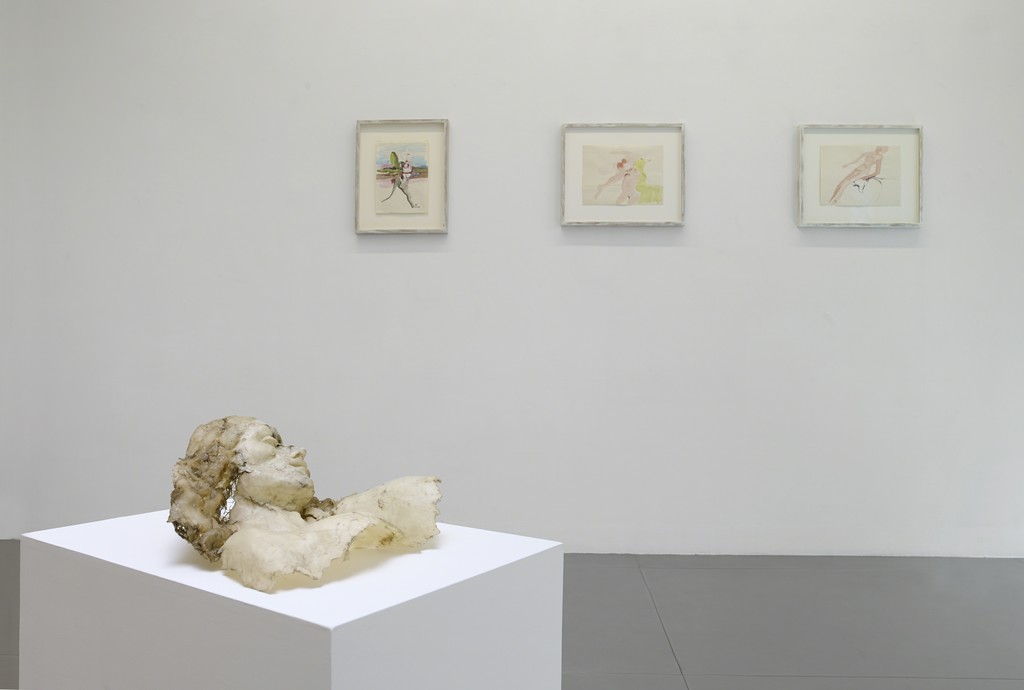 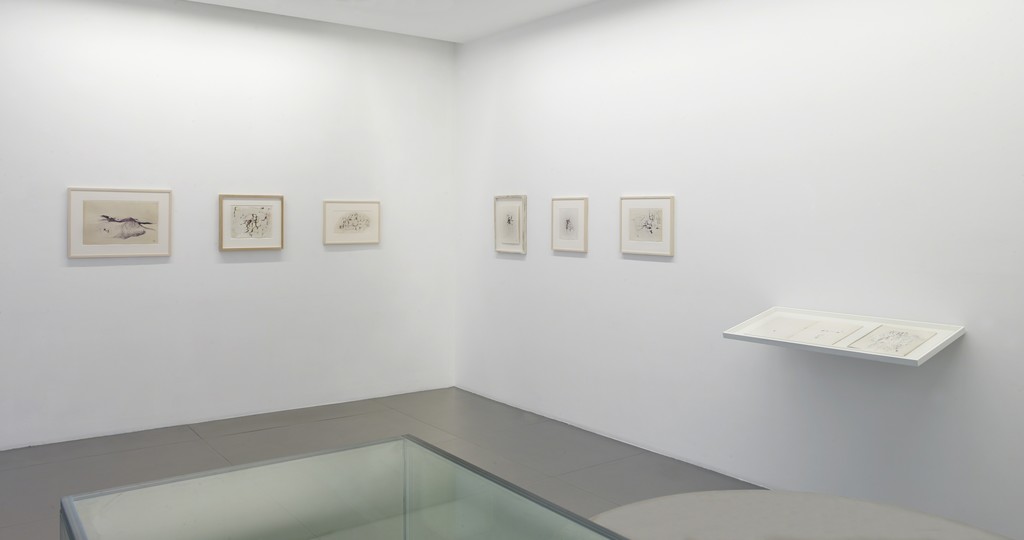 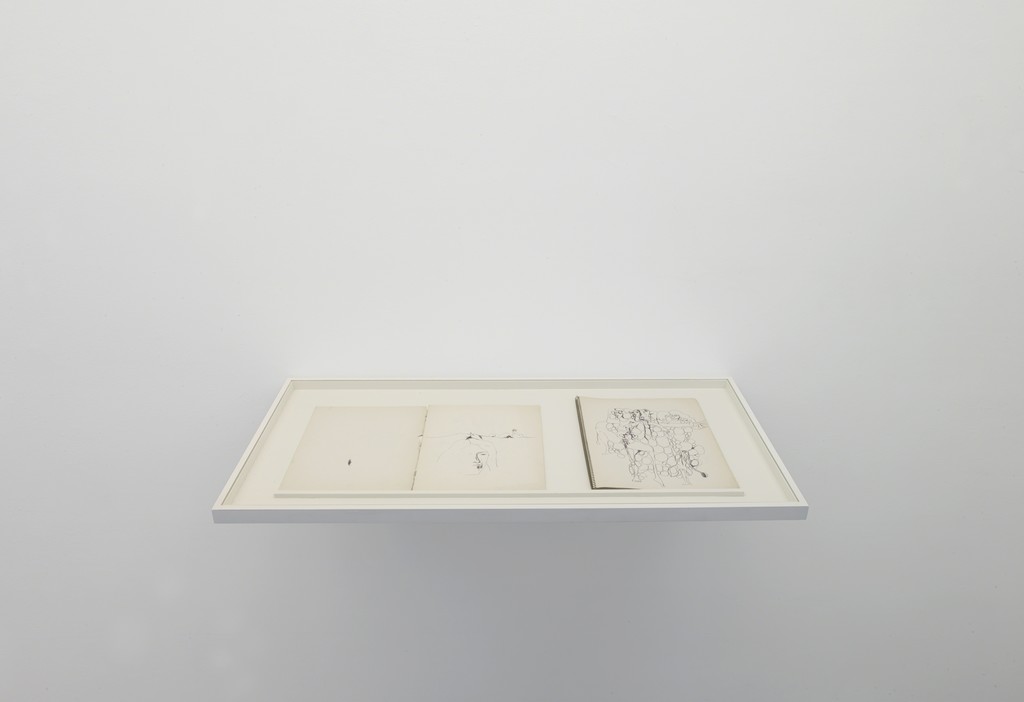 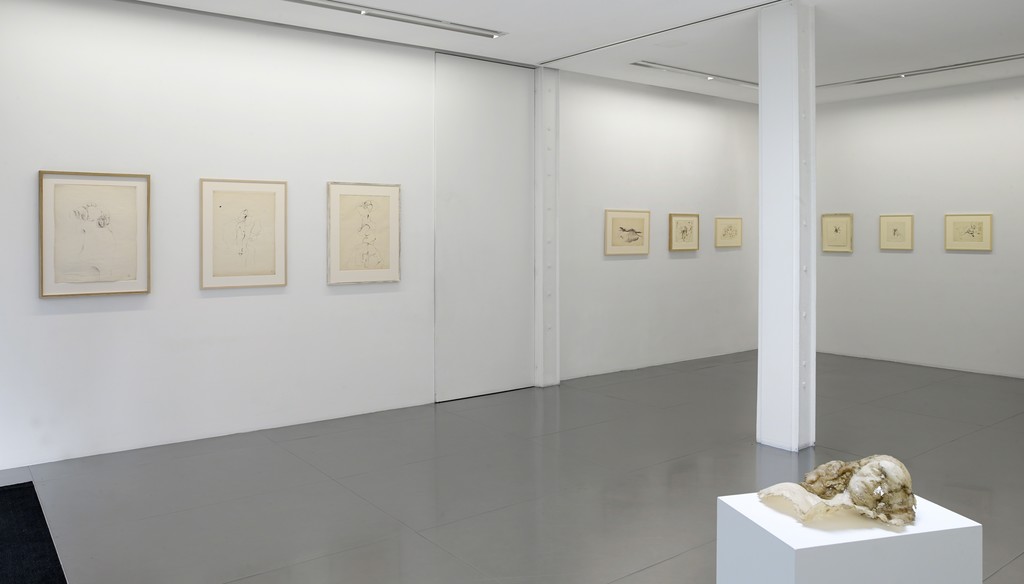 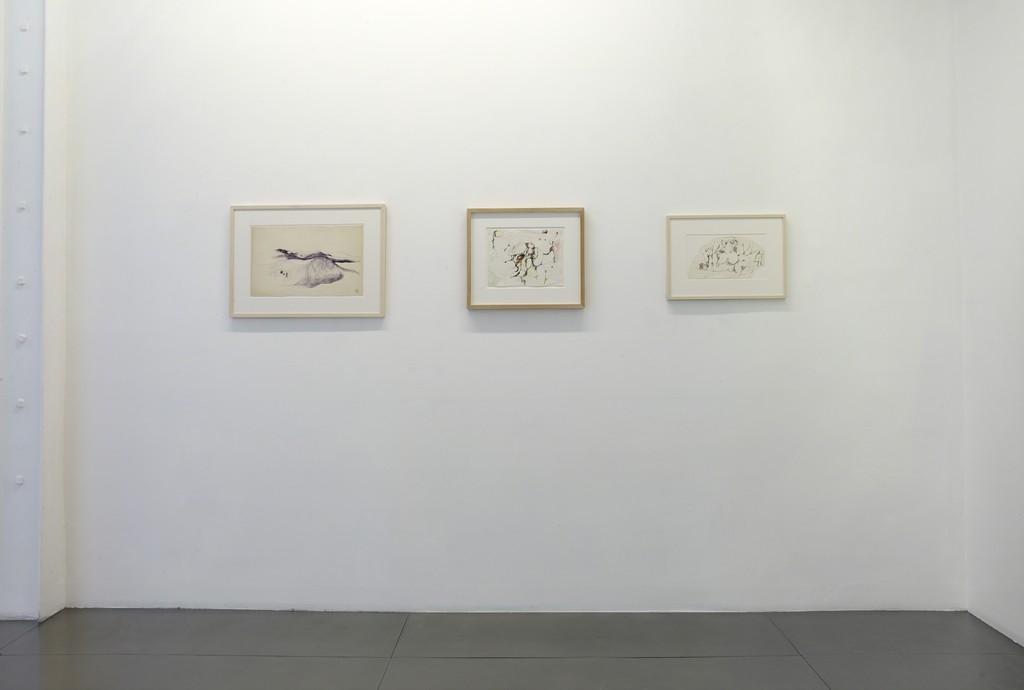 Szapocznikow’s intention to raise her objects physically and metaphorically above the floor is evident throughout her œuvre. Until the last years of her life, she emphasized verticality in her drawings, but in her final cycle of works, that verticality is dramatically surrendered to flatness and, ultimately, to the transcendental essence of weightlessness(2). In a drawing from the series Paysage humain (Human Landscape, 1971), the composition stretches across the surface of the sheet, her title indicating the expansive scope of this new direction(3). In previous years, she had described her biological forms and disjointed figures on paper; now she appeared to be creating scenes for them—the incongruous settings of Salvador Dalí come to mind, as do the organic pastiches of Arshile Gorky. Szapocznikow enhanced the dreamy realm of the Human Landscape drawings with heavily diluted washes of green, pink, grey, and blue watercolor that are more Pop than Surrealist, recalling the loose washes in Claes Oldenburg’s drawings of the 1960s(4). While Szapocznikow’s use of color had previously been largely descriptive, her images were now bathed in it.

Szapocznikow’s full repertory of forms appears in this series, rearranged and conflated into a fantastical cast: lumps converge with vaginas, lips rest on disjointed legs, eyes peer through the horizon, a female figure drifts onto a phallus. At times, the erotic tension is condensed in the vividness of the medium, like the patches of pale pink in a number of untitled drawings from the Human Landscape series; the palpability of flesh is instantly felt. She might have looked at Auguste Rodin’s watercolors of female nudes on one of her frequent visits to the Musée Rodin. In drawings like Recling Woman (1900-06), Rodin exploited the transparency and allusive quality of the washes, his figures afloat on the sheet. Confronting her impending death, Szapocznikow created her own transporting scenes, like intimate passages into the afterlife.
Szapocznikow’s final sculptures can also be considered “human” landscapes. In the Herbarium series (1971-72), casts taken from her own body and that of her son were crushed and laid flat like flayed skins in what was the artist’s most visceral attempt to make the impermanent permanent. The title refers to the tradition of perserving plant specimens by pressing them in books. Szapocznikow’s imprinted layers of polyester resin certainly allude to death, yet flattening the casts somehow makes them more lifelike than death masks(5). They beg the question, asked by Georges Didi-Huberman, “Does the process of imprinting induce contact with the origin or loss of the origin?(6)” Do they invoke the presence of the absence of the subject? The Herbarium cycle is an eerie evocation of both. As Szapocznikow’s memento mori, they along with the Human Landscape series, are material reminders of the evanescence of the human body. Her stated aim was ultimately “to exalt the ephemeral in the folds of our body, in the trace of our passage.(7)”

Draftmanship served as an immediate and primal mode of artistic production for Szapocznikow. She drew on any available surface, as her son Piotr later recalled, even on a packet of cigarettes(8). Ideas born on paper were reconfigured in consecutive compositions; endless possibilities evolved from a single theme. Some developed into three-dimensional form, while others existed purely on the tow-dimensional picture plane. Occasionally, a drawing took its cue from a sculpture, but all affirmed the artist’s presence within the trace of her gesture. The calligraphic marks of her hand in the drawings correpond to the casts she took of her body. They reflect Szapocznikow’s need to exist through her work, like the “absurd and convulsive mania [that] proves the existence of an unknown, secret gland, necessary for life9” she refers to in her 1972 credo.