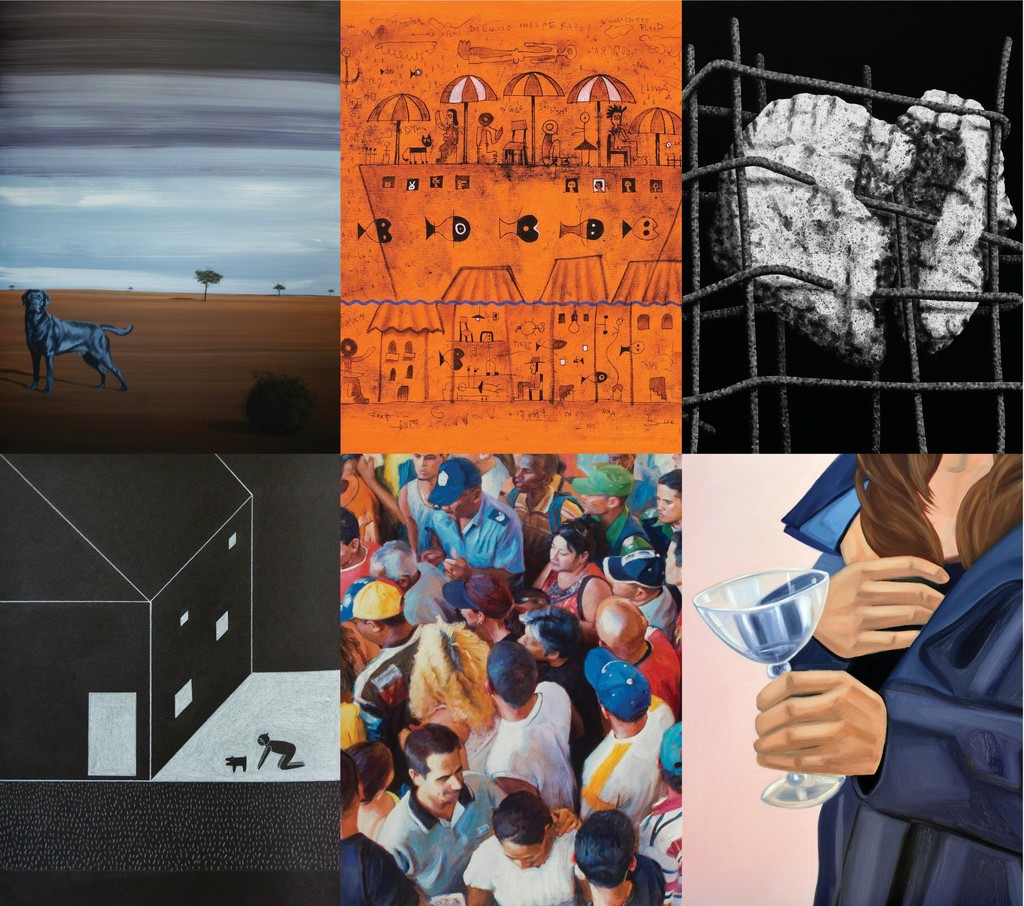 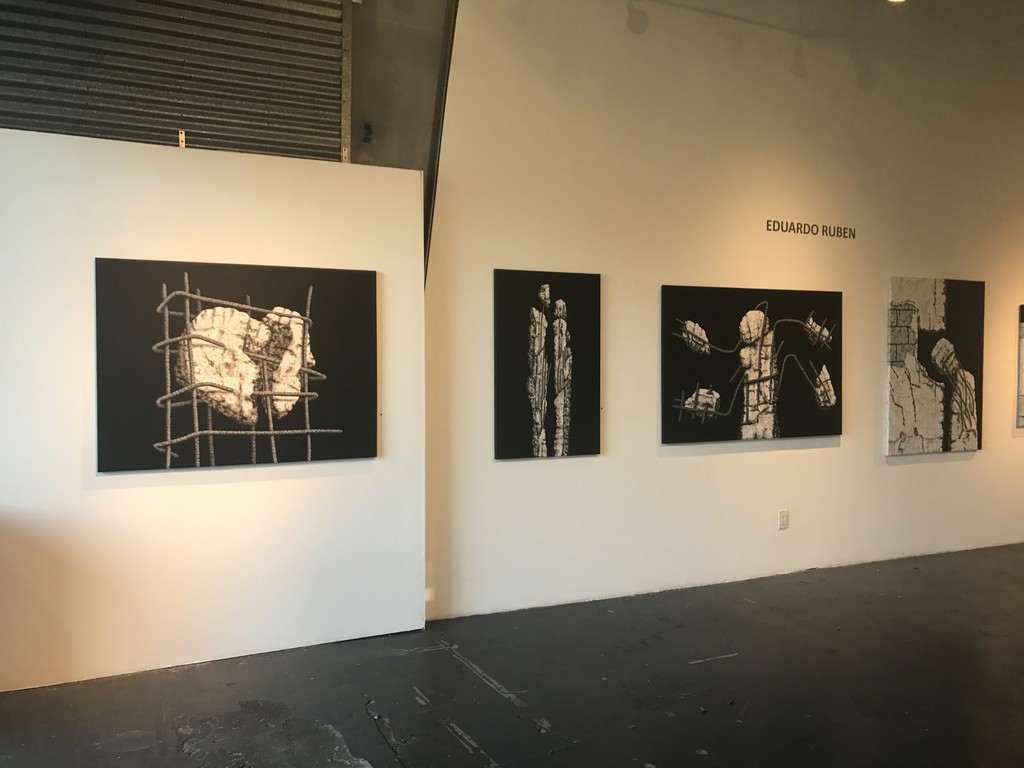 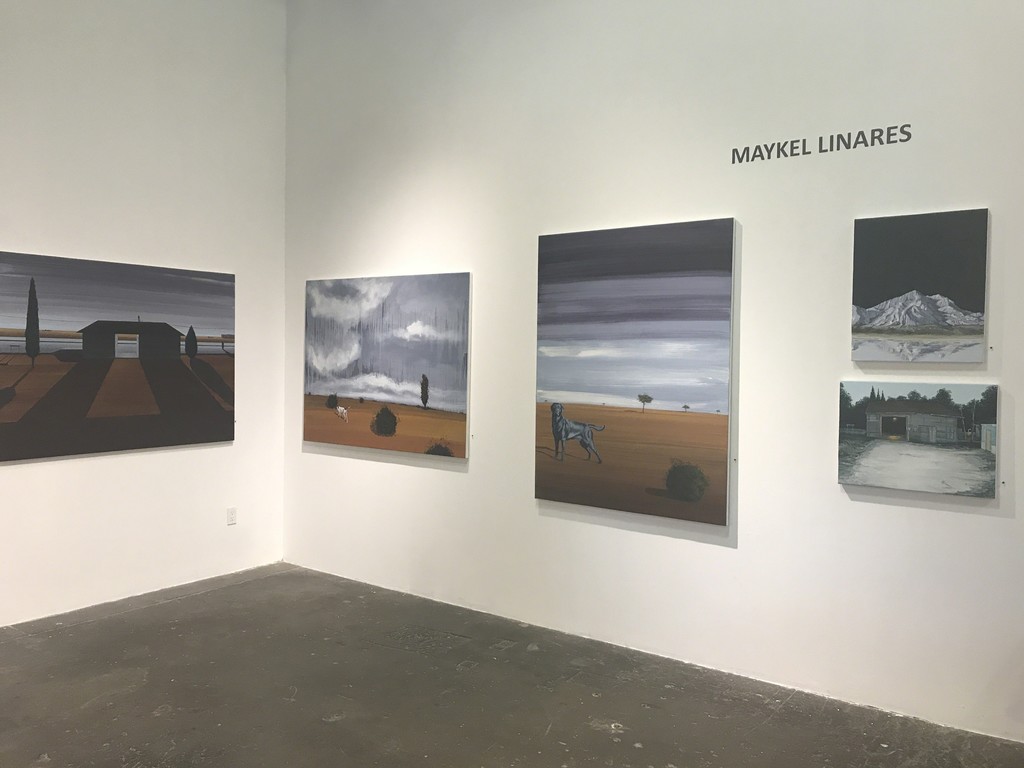 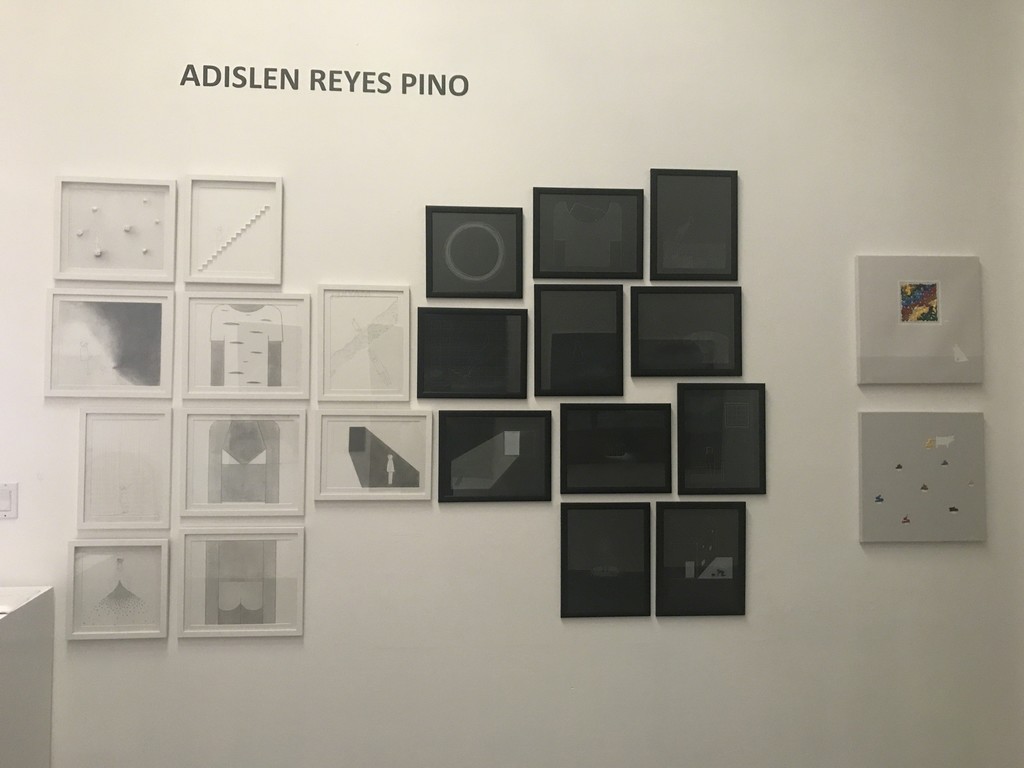 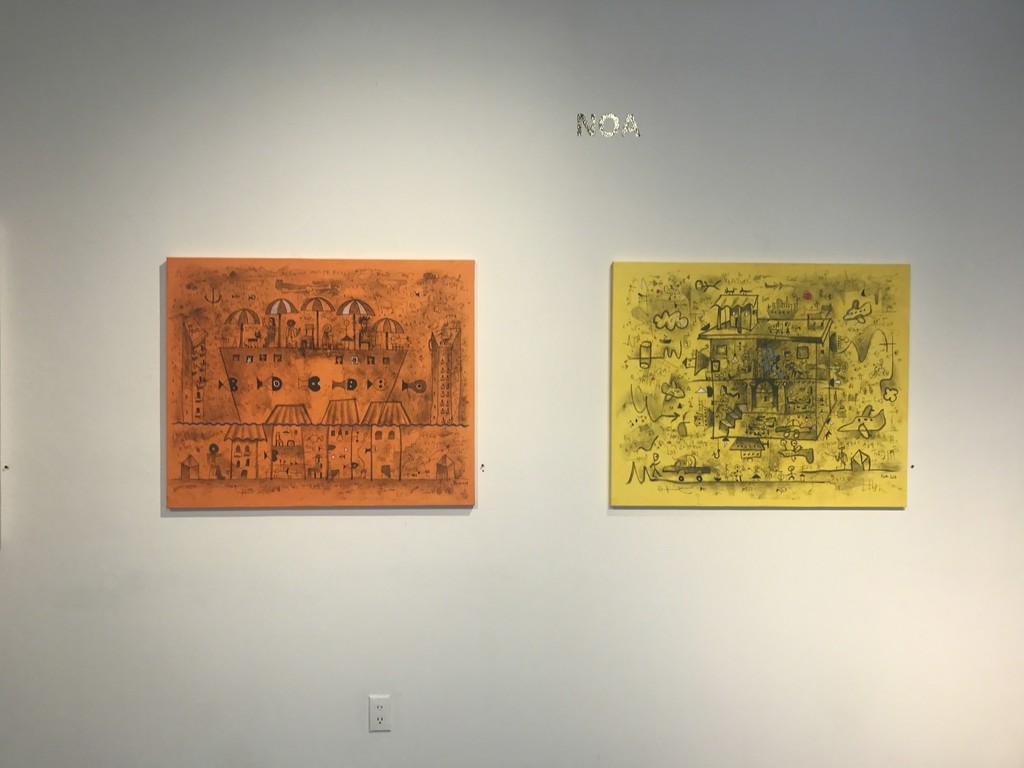 Alejandro Gómez Cangas' work depicts the rainbow of humanity in kaleidoscopic motion focusing on the tension that each person experiences as they try to assert and maintain their individuality. Alejandro’s paintings often show crowds of people waiting in line or walking together towards an unknown situation. Alejandro creates these scenes by taking photographs of individuals walking alone, collages them and uses them as a reference point for his paintings. Cangas’ work is focused on how the individual fits within society and the difficulties one may have navigating their movements and their thoughts in relation to others.

Adislen Reyes Pino’s work is inspired by her generation's angst concerning Cuba's uncertain future. Pino's drawings from her "Nightmare" series differs from her earlier series "Crisis" in that it uses a black background that adds a more tragic tone to the small narratives that her drawings depict. Both series will be shown together in this exhibit.

Pino draws in simple small-scale outlines, almost childlike, seemingly in conflict with the images of the anxiety provoking situations she is portraying. However, the contrast is all the more provocative.

Adislen Reyes Pino was born in Havana in 1984. She graduated from the Higher Institute of
Arts and the San Alejandro Academy of Fine Arts, where she is now working as a professor. Pino’s work has been exhibited in several solo exhibitions in Havana, Cuba. Adislen’s work has been featured in the Taipei Fine Art Museum in China, The Art Museum of the Americas in Washington DC and the Museum of Contemporary Art and Design in Costa Rica. In addition, Pino has participated in many themed group exhibitions internationally, dealing with issues of the Cuban avant-garde and gender identity. In the United States, Pino has shown in California, Connecticut, New Jersey, Florida and New York.

Darwin Estacio Martinez uses a universally understood visual language to convey unfinished stories like still images taken from a movie. Darwin takes those moments of an embrace, a handshake or other human interactions and zooms in, fragmenting the figures into mysterious compositions of bold color. By doing this the artist shifts the emphasis from the gesture and figure over to the mood or intention of the scene. Martinez’s paintings are deliberately open to interpretation. There is always a general understanding of what is happening in the painting but each painting does not have an assigned meaning. “It’s amazing how for the Cuban people my paintings hide some political statements, and for the French or Italian they relate my work to the world of sexuality”. Darwin’s love of film is reflected in the cinematic quality of his work and the compositions of his paintings. Martinez believes that in pursuing a method that emphasizes the generic, he can capture the fluid nature of identification and transcend national identity.

Darwin Estacio Martinez has studied art since childhood. At the age of nine he began attending an elementary art school in Cuba. Martinez received his Masters degree in 2011 from the Instituto Superior de Arte in Cuba. Martinez is currently a professor at La Escuela Nacional de Bellas Artes in San Alejandro, Cuba. He has been exhibiting his work since 1997, with solo and group exhibits throughout Cuba, Europe, and Boston, MA. Martinez’s work has been shown at Casa Museo, Alejandro de Humboltd in Havana, Cuba in 2005 and at Staedtischen Museum in Traunstein, Germany in 2011.

Maykel Linares’ work is a reaction to the sentimental content of popular imagery that awakens in the viewer empirical associations. In this collection of paintings there is a strong link to the landscapes often seen in the paintings of the Surrealists like De Chirico, Magritte and even Dalí.

There are two concepts essential to Maykel’s work one is the reaffirmation of the individual and his private space. This concept is a natural reaction to the gregariousness of Cuban society. The second focuses on the displacement of populations leading to the culture of the Nomad.

In exploring the idea of the nomad and displacement Maykel uses recurrent patterns in his work. The idea of flight, places of passage, and the four seasons of the year are captured in his work. Linares idealizes open spaces, always seeking to portray the amplitude of the great outdoors as infinite. Linares’ paintings demonstrate a world familiar but still distant from reality.

Maykel Linares is a graduate of Escuela de Artes Plásticas in Trinidad, Cuba. Maykel ‘s work has shown in Finland, Spain, Russia and more galleries all over the world. Maykel has been featured in the Magazines ArtonCuba and Noticias de Arte Cubano, as well as many others. Linares’ work is in the collections of Pilar Citoler and the Fundacion Caja Sol in Spain.

Luis Rodriguez NOA’s paintings depict the fleeting moments of daily life in the city of Havana—like a couple drinking wine by the pier, a man watching TV alone, children on bicycles, or airplanes crossing the sky. NOA illustrates all of this activity and more in each composition through a colorful expression of both comedy and tragedy. NOA is drawn to what he calls “the true expression of the subjective.” He does very little planning before he begins a painting and makes his decisions for the composition as he mixes his acrylics directly on the canvas or paper. “If I had to summarize my work I would say they are free expressions of creativity and a meeting of the intuitive and rational. They exist between the common place and the fantastical.”

NOA’s relationship with art started early in his life. His father is an artist and professor who introduced NOA to Cuba’s artistic and intellectual circles. Luis Rodriguez NOA graduated with a degree in Sculpture and Drawing from the Escuela Nacional de Arte en La Habana (ENA) as well as from the Instituto Superior de Diseño Industrial (ISDI) with an emphasis in Graphic Design. NOA is a renowned graphic artist who has won awards for his work in film posters and comic strips for Cuban publications. Luis Rodriguez NOA exhibited at the National Museum of Fine Arts, the Museo Nacional de Bellas Artes in Cuba and the Museo de las Americas in Puerto Rico.

Eduardo Rubén’s paintings are a reinterpretation of the visual experience in Cuba, as well as, the psychological and emotional reality of daily life. This exhibition will be a continuation of his ongoing series “Combatants”, large black and white acrylic paintings that depict broken concrete monuments reflective of all the abandoned, deteriorating, and half-constructed buildings in Cuba. These depictions of twisted, worn out building remains withbent rebar, and deteriorating columns are sad monuments of the tragic characters of Cuba’s past and present. Eduardo’s intention is to illustrate through painting, ideas of heroism and stoicism, which are fundamental to the portrayal of Cuban history.

Eduardo Rubén is a graduate of Instituto Superior Politécnico José Antonio Echevarría in Havana, Cuba where he studied architecture. Rubén’s works are part of collections in Havana at the Wifredo Lam Center, the Fondo Cubano de Bienes Culturales, the National Museum of Fine Arts and the National Council for Visual Arts (CNAP). His work is in collections across the globe including the Museum of Modern Art “La Tertulia” in Cali, Colombia, the Museum of Modern Art in Santo Domingo, Dominican Republic, the Costa Rican Museum of Art in San Jose, Costa Rica, the Museum of Fine Arts in Budapest, Hungary, the National Museum in Szczecin, Poland, the Nouveau Centro de Arte in Santo Domingo, Dominican Republic, Museum of Finest Cuban Arts in Vienna, Austria.