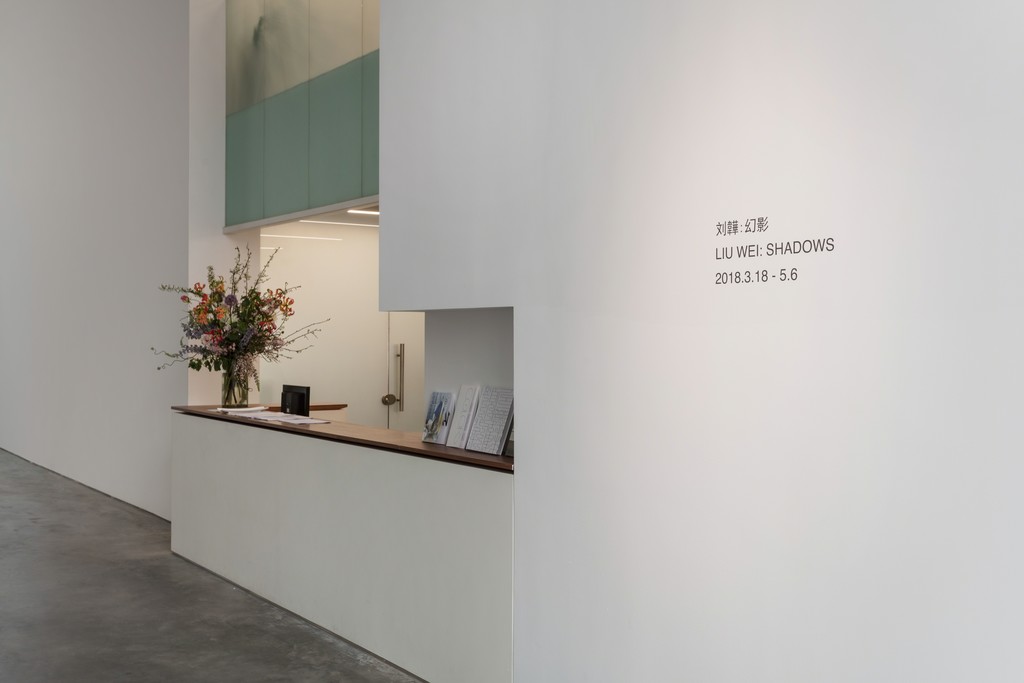 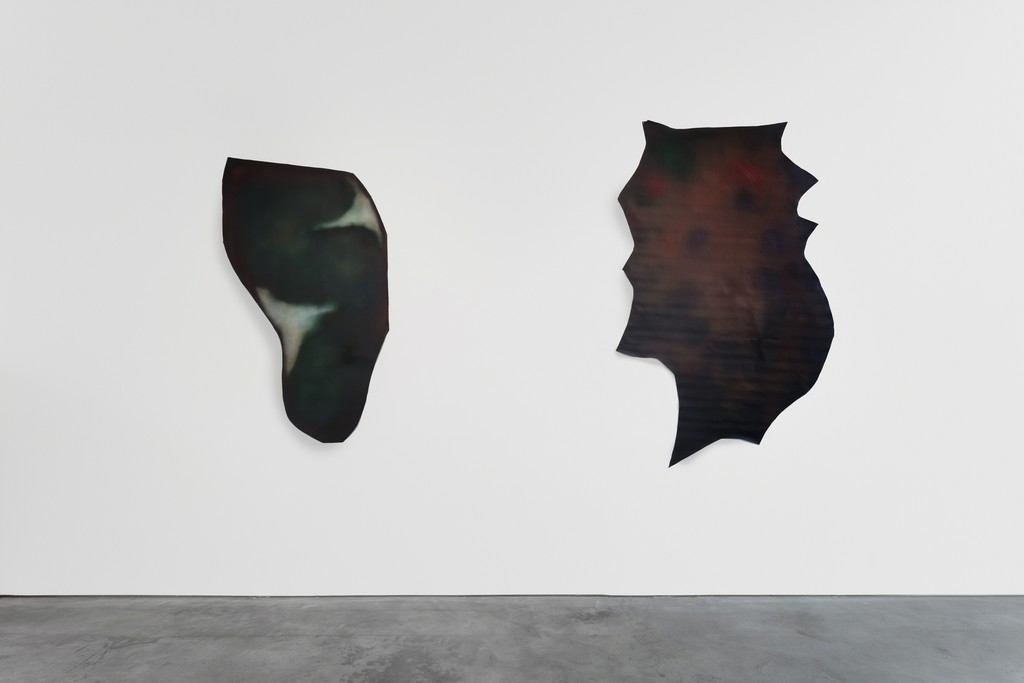 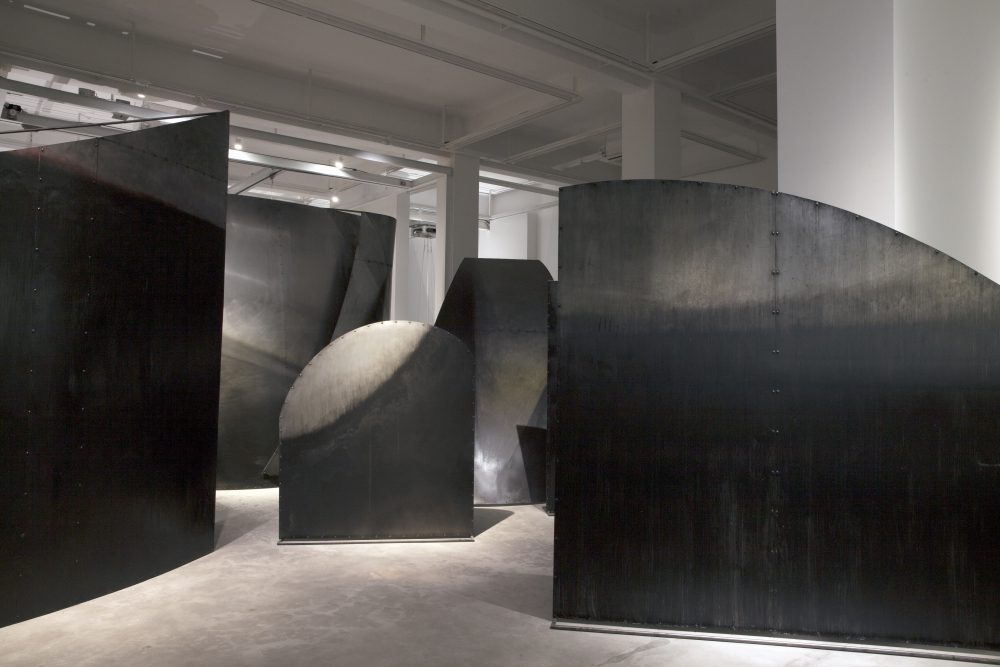 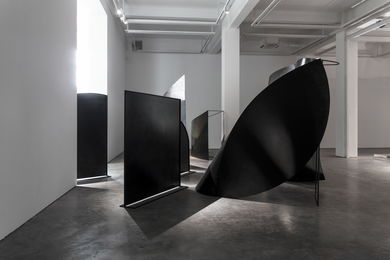 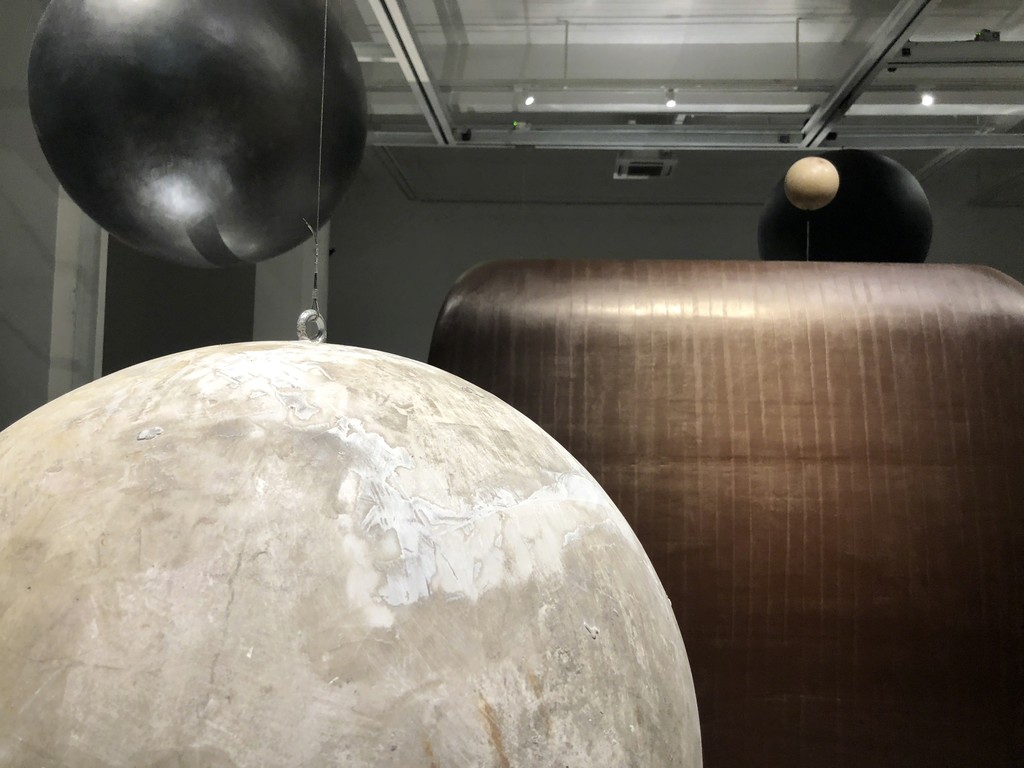 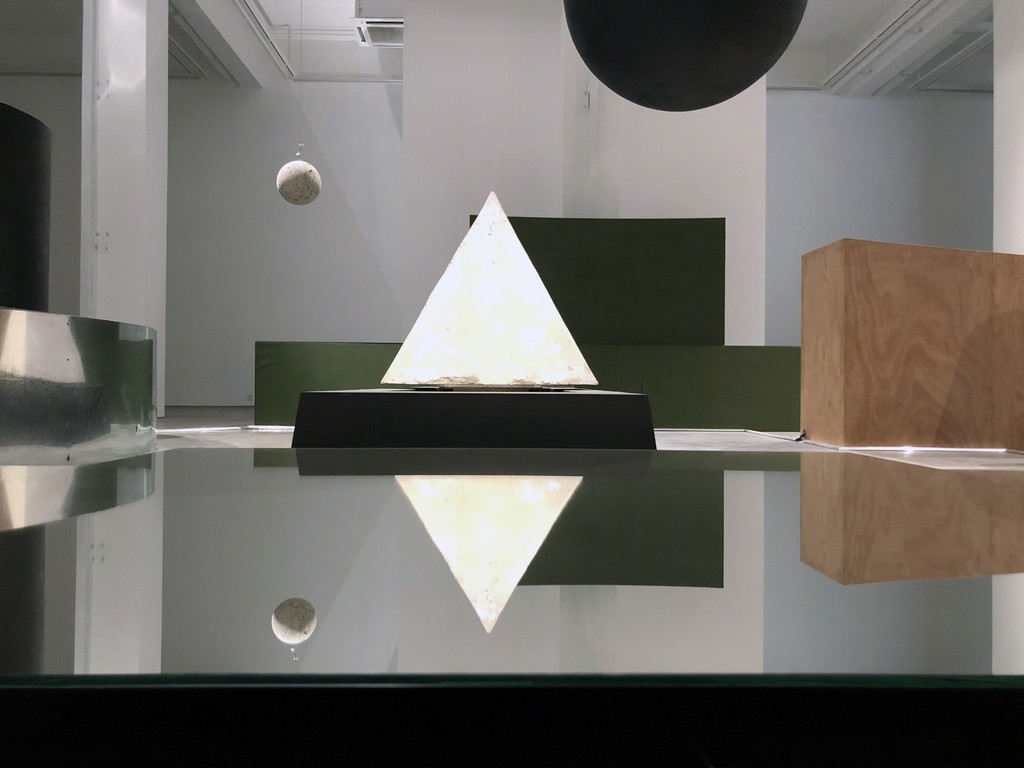 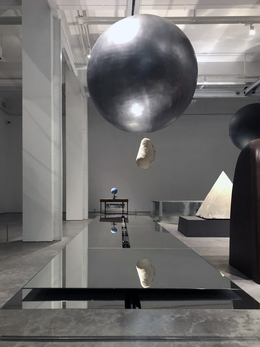 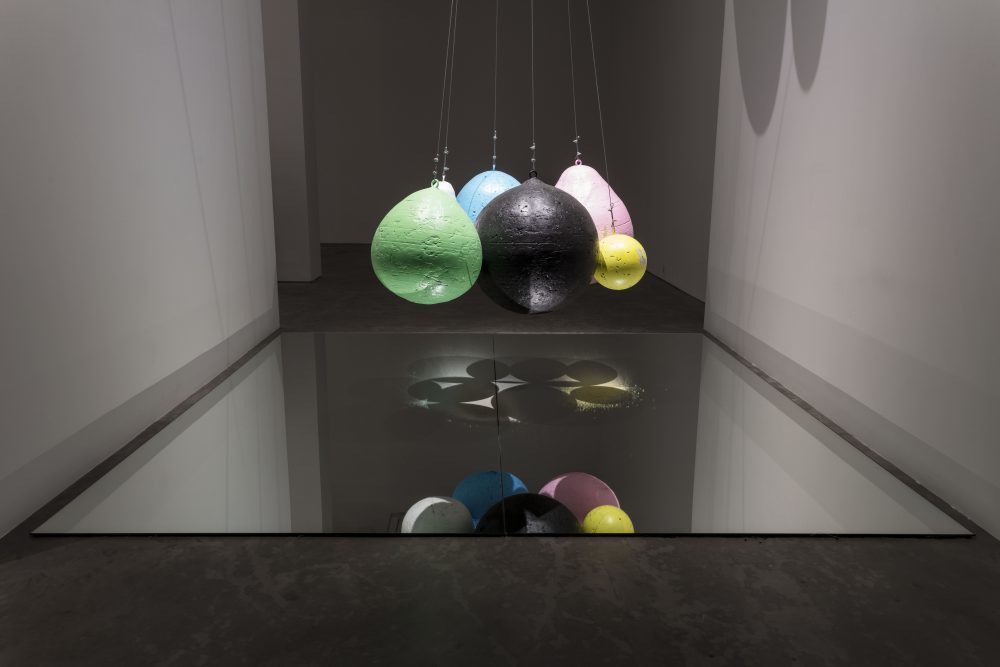 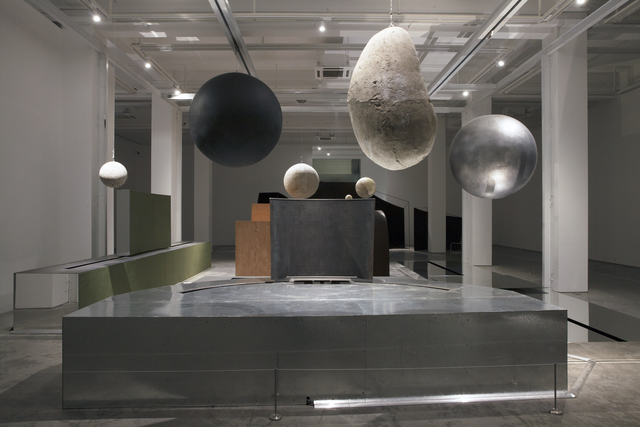 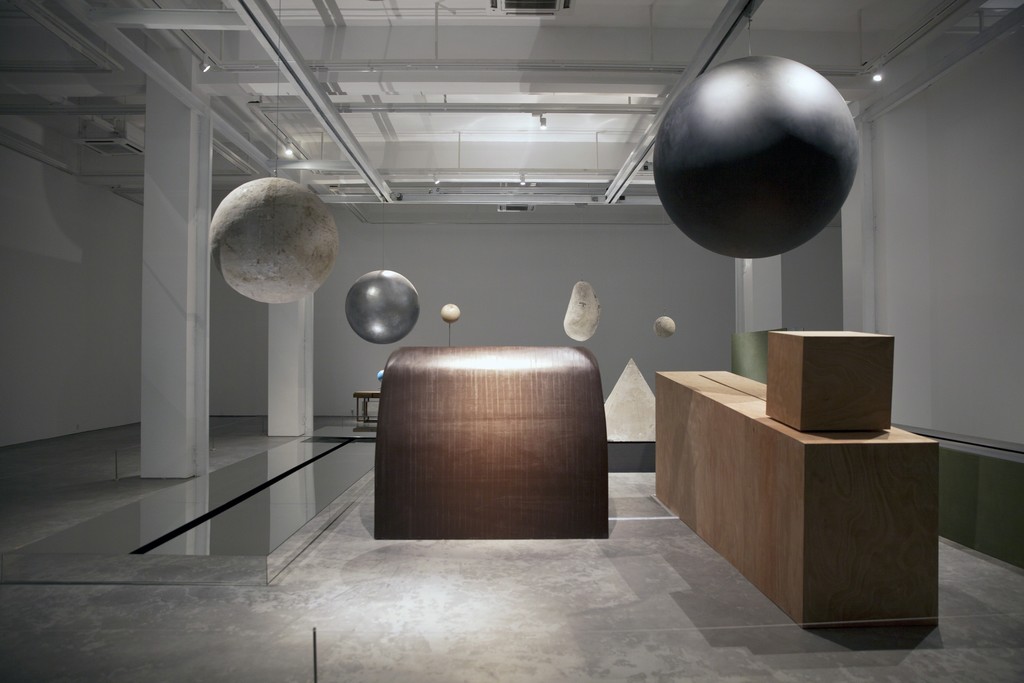 Liu Wei’s recent large-scale installations and paintings continue to reflect his sensitivity towards urban texture in China’s post-planning era. In his own abstract and streamlined fashion, he retains a certain material and affective tension which parallels the deliriousness of the landscapes around him. His 2015 solo exhibition “Colors” at the Ullens Center for Contemporary Art explored the politics inherent in abstract blocks of color: negating the image of things is in fact a violent process, leaving a strong physical impression. For “Shadows” at Long March Space, Liu Wei shifts his interest from color-field abstraction to how shadows land on materials imbibed with their own sensitivity.
At the entrance of the gallery, the exhibition’s title installation series “Shadows” (2018) sprays paint onto metal structures, both reflecting light and engulfing shadows. The spatial arrangement of these pieces at once draws viewers into the exhibition and conceals their bodies amongst the scenery. Inside, Long March Space’s main hall becomes a construction site, filled with kinetic assemblages entitled Period (2018). These giant cement spheres, modeled after the shape of balloons, run on along their own tracks together with other assorted pieces of urban detritus, as if passing down an assembly line, responding in a way to the quasi-abstract movement of lights in a nearby multi-channel video installation. The artist describes the trajectories of these spheres at different speeds to be “as if each had their own sense of time.”
In Liu Wei’s artistic practice, he frequently questions generally held understandings of aesthetic taste and its criticality. Instead, the artist is more inclined to extract visual tension from raw materials and their forms of urban existence. This process is non-human, yet it is also a social apparatus formed from the only form of emotional tension still remaining today. For Liu Wei, this manifests the specific experience that is the acceleration of material flows and accumulation in Beijing since 1990s, and therefore the landscape that has haphazardly piled-up in between highly symbolic order and post-planning disorder. He abstractly extracts the rationality between layers of materials, obtaining what Robin Peckham calls a “core sample” of the city. In contrast to the “Anti-Matter” series (2006) which imagined the state of property rights at the time, today these visible things are vanishing faster than ever, and the remnants of physical presence can only be depicted through shadows. This time, from the perspective of his work site, Liu Wei depicts indefinable issues: scenes of existence in extreme urban conditions and the sensory entropy created through endless material flows and convergences, also implying speculation on limited, temporary property rights.

About the artist
Liu Wei (b.1972, Beijing) was trained as a painter at the China Academy of Art, Hangzhou, graduating in 1996. He is heavily influenced by the instability and fluctuation peculiar to twenty-first century China, in particular with respect to its physical and intellectual landscape. Initially Liu belonged to the generation of artists known as the Post-Sensibility group; in the years since, with his paintings, videos and large-scale installations, Liu has become a singular presence on the global art stage. Post-Duchampian, and actively negotiating with the legacy of the Modern, his works crystallize the visual and intellectual chaos of China’s fraught transformations into an artistic language as versatile as it is distinctive. The long-term “Love It, Bite It” series of oxhide installations, “Jungle” canvas installations, “Density” book installations and the recent, monumental series of paintings “The East” and “Panorama” for instance, represent the immense diversity found in Liu Wei’s art: ruined, dystopian structures made of uncanny materials that pertain chiefly to the urban environment today, and painted surfaces of formidable tranquility that communicate actively with the history of abstract art.
Liu Wei’s recent solo exhibitions include “Shadows,” Long March Space, Beijing, 2018; “Panorama,” PLATEAU, Samsung Museum of Art, Seoul, 2016; “Silver,” White Cube, Hong Kong, 2015; “Colors,” Ullens Center for Contemporary Art, Beijing, 2015; “Sensory Space 4,” Museum Boijmans van Beuningen, Rotterdam, 2014. His first solo exhibition was held in Courtyard Gallery, Beijing, 2005.
Recent group exhibitions include “L’emozione dei COLORI nell’arte,” Castle of Rivoli, Turin, 2017; “What About the Art? Contemporary Art from China,” Al Riwaq, Doha, 2016; “Bentu, Chinese artists at a time of turbulence and transformation,” Fondation Louis Vuitton, Paris, 2016; “Adventures of the Black Square - Abstract Art and Society 1915-2015,” Whitechapel Gallery, London, 2015; “28 Chinese,” Rubell Family Collection, Miami, 2013, among others.
Liu Wei has participated in the 3rd Aichi Triennial (2016); the 9th and 13th Biennale de Lyon (2007, 2015); the 11th Sharjah Biennial (2013); Guangzhou Triennial (2002, 2005, 2008, 2012); the 6th Busan Biennale (2008); the 51st Venice Biennale (2005); Shanghai Biennale (2004, 2010, 2016), Art Basel Unlimited (2013, 2015). He has received Artist of the Year from the Award of Art China (2016); the Martell Artist of the Year (2012); the Chinese Contemporary Art Award for Best Artist (2008); he was nominated for the Credit Suisse Today Art Award (2011).