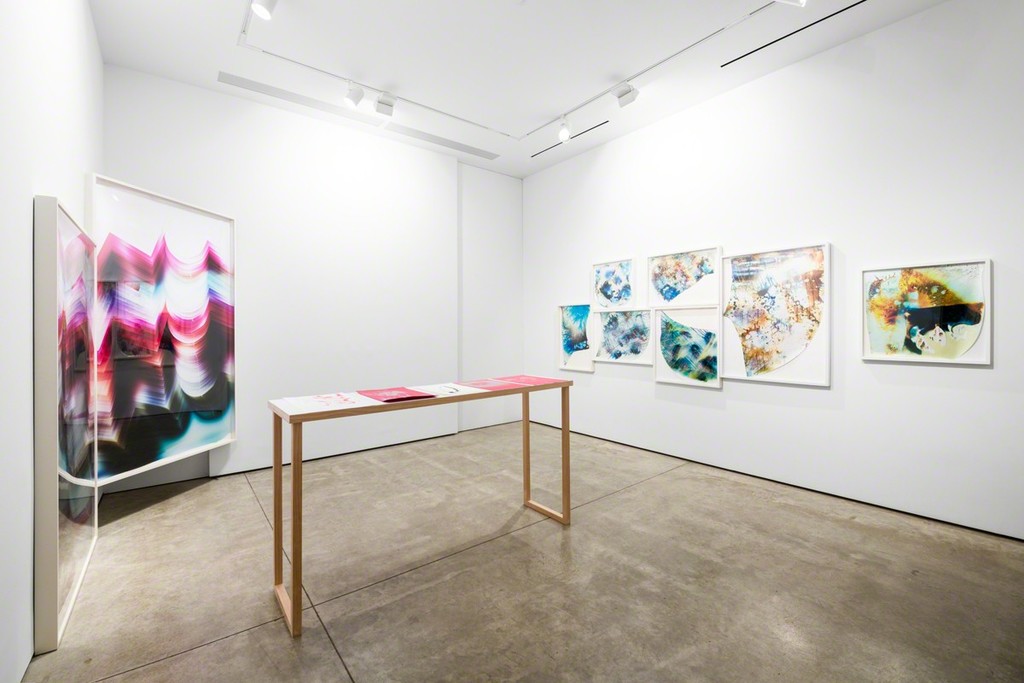 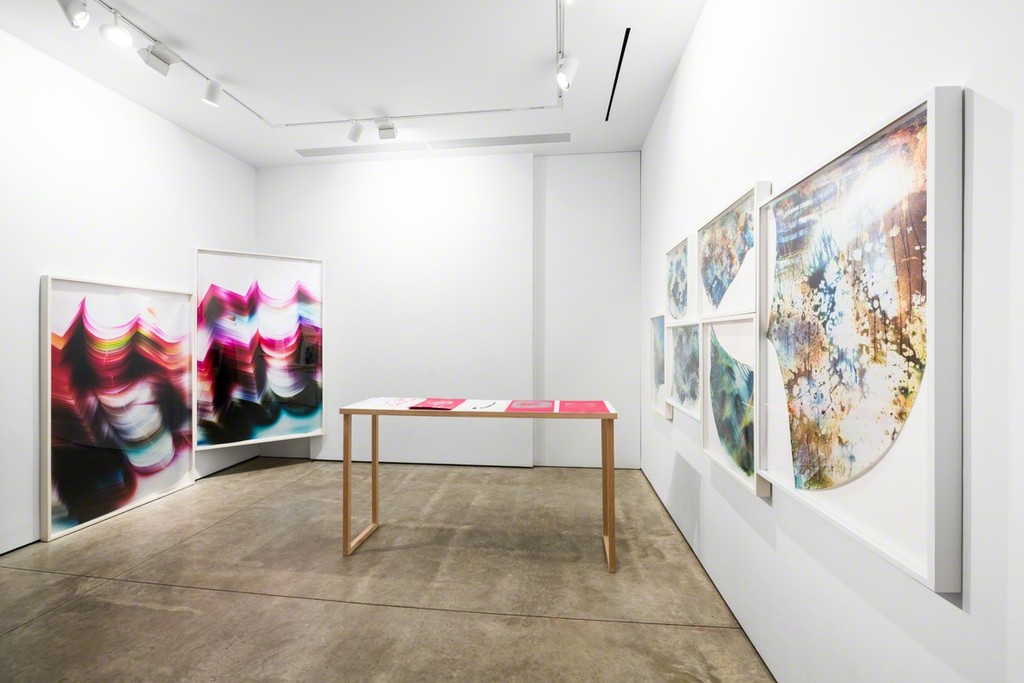 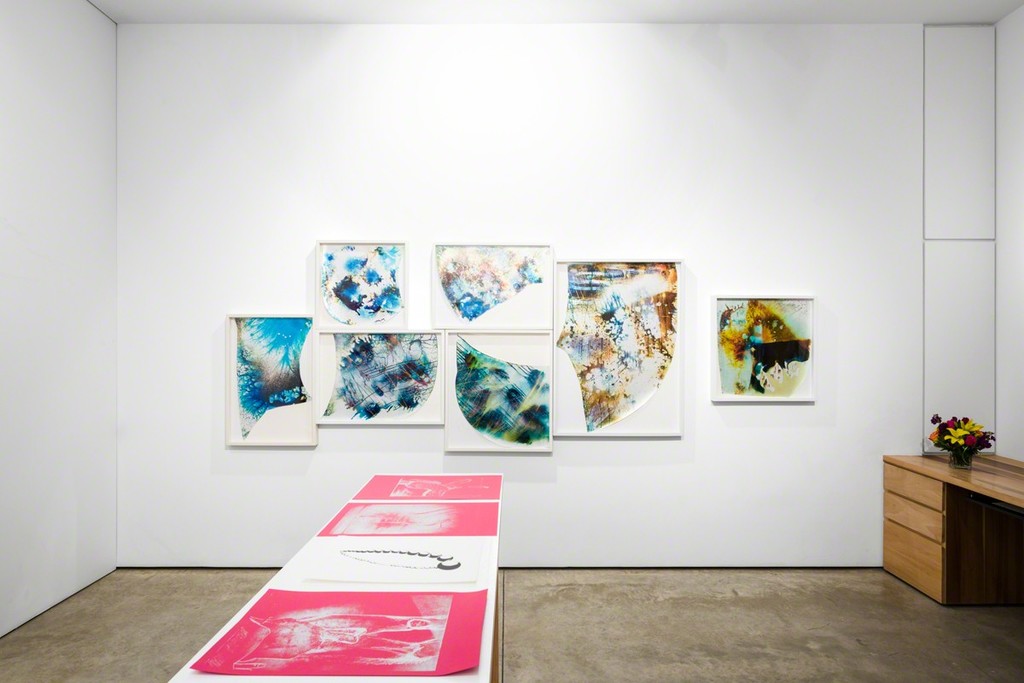 Lora Reynolds is pleased to announce Fun Packed Holiday, a project-room exhibition of new
photographic prints and lithographic drawings by Mariah Robertson—the artist’s first
presentation at the gallery.
Mariah Robertson uses no camera to make her photographs; she calls them “chemistry prints,”
and makes them by manipulating light-sensitive paper with darkroom chemistry in
unconventional ways. The results look like fiery bolts of acidic lightning jolting through the sea,
stars collapsing or exploding, and leukocytes jousting with invading pathogens. Her
photograms, on the other hand, are made up of cascading circles and squares (outlines of
beloved, hand-shaped, cardboard burning/dodging tools)—perhaps reminiscent of
Duchamp’s Nude Descending a Staircase, only rendered in technicolor. And her new
lithographs are drawings of nude men she made at the Tom of Finland House.
In a stroke of serendipity in 2011, Robertson unintentionally exposed a large roll of photographic
paper to light. Instead of throwing away the paper (presumably ruined), she splattered it with
darkroom chemistry and was surprised to learn she could continue to manipulate the paper
even after it had been completely exposed. After further experiments with varying the
exposure time and temperature of photo chemicals and water—as well as altering the usual
order of the developing process—Robertson was able to coax her materials into producing a
wide range of vivid colors, dramatic patterns, and unexpected outcomes. She makes these
pieces with the lights on, watching as the chemicals swirl and blossom, reacting with each
other and the paper.
Photographers—especially those who shoot film and work in a traditional darkroom—generally
prize precise and masterful control of light, temperature, and the various materials of their
craft. Robertson revels in subverting these highly specific and rigid rules. The air temperature
in a photo lab—as well as that of the water and chemicals used to develop film and process
prints—is always supposed to be exactly 68 degrees. (But Robertson’s experiments with
temperature sometimes include pouring boiling water out of a kettle onto her works in
progress.) Glossy paper is commonly thought of as too slick, vulgar, and commercial for fine
art applications. (Her favorite paper is not only glossy—it also has a metallic sheen.) Photo
paper is extremely fragile and susceptible to dents and creases—imperfections generally
considered unforgivable. (But she slices big, jagged fragments of paper with a box cutter and
waltzes around her tiny studio holding the unwieldy pieces of paper like dance partners—
essentially inviting dings as markers of lived experience.)
Robertson’s engagement with rule-breaking extends to her framing decisions, too. All the
frames in this show are painted white, but not the same white—some are warm, others are
cool, and the rest are neutral. Some works are even mounted on three different colors of white
mats. Her frames are several inches deep to let her paper curl, instead of forcing it to lay flat
(as is generally expected of photographs). And in the detailed instructions she gives to her
framer describing her peculiar preferences, she insists the framer’s judgment calls should
always “err on the side of wrong, i.e., don’t center, don’t choose the tasteful option.”
With her depictions of naked men, Robertson reverses the archetypal power dynamic
between the visionary male artist and subservient female nude model. Although her usual
models are regular-looking guys she hires from the internet, the models Robertson drew at the
Tom of Finland House more closely resemble the beefy, hyper-masculine men the Finnish
artist was known for fetishizing. As in his drawings, many of Robertson’s nudes focus on a
model’s penis (although for different reasons)—she gets straight to the point of playing catchup
with the overabundance of breasts scattered across art history and contemporary media.
Robertson’s irreverence is equal parts lighthearted humor, academic patricide, and existential
reckoning. Her work simultaneously recalls the beginning of time, the struggle of survival, and
the apocalypse—the fragility of her paper and the unpredictability of her process speaks
directly to the human experience. “You don’t have anything forever,” she says, “So just make
the most of it now while you can.”
Mariah Robertson, born in 1975 and grew up in California, lives and works in New York. She has
mounted solo exhibitions at BALTIC Centre for Contemporary Art (United Kingdom), Grand
Arts (Kansas City), and Museum 52 (New York). She has also shown her work at the
Contemporary Arts Museum Houston, Cleveland Museum of Art’s Transformer Station, de
Cordova Sculpture Park and Museum (Massachusetts), International Center of Photography
(New York), and Museum of Modern Art (New York), MoMA/PS1 (New York). In 2014, Art21
featured Robertson in their documentary series New York Close Up. Many international
publications have reviewed her work, including Architectural Digest, Art in America, Artforum,
FRIEZE, Interview Magazine, LA Times, The New York Times, and The New Yorker. Her work is
in the collections of the Los Angeles County Museum of Art, Museum of Modern Art (New
York), and North Carolina Museum of Art (Raleigh).